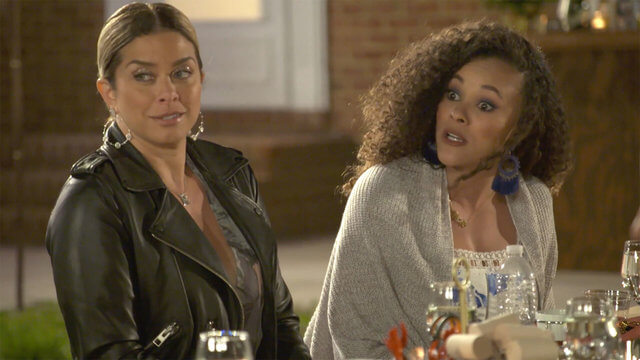 Welcome back to a brand-new episode of The Real Housewives of Potomac! The couples are enjoying a trip on the Eastern Shore, and we’ve had a handful of drama — and it’s only day two! Everyone takes a nap once they return to the house, and Ashley Darby is checking baby Dylan’s milk supply. The green-eyed bandits are still complaining about their non-bathroom, as Wendy Osefo sets up for dinner. Ray Huger and Karen Huger are cutting up per usual and everyone is getting fancy for tonight’s meal. Everyone heads to the kitchen and the Hugers dance as they celebrate a love that only they have. The crew gets settled outside and Wendy has done the thang with decorations and amazing food to match. Gordon Thornton got a little chilly outside and opted to head inside while Mia Thornton enjoys herself.

Wendy Osefo makes a toast and congratulates Ray and Karen on making it to 25 years of marriage. Karen advises the ladies to open their gifts outside and Wendy updates us about her kids at home. Out of nowhere, Ashley asks Eddie whether or not he’s spoken to his mother! This is a touchy subject that I’m not sure Wendy will appreciate Ashley bringing up. Eddie reveals his mother called him recently and that the door is cracked for a resolution between the two. Wendy wants them to move forward and create new memories together. Askale Davis speaks healing over their family, as Robyn Dixon makes a face in the background. Mia thinks it’s powerful to allow for reconciliation, and it gives Mia hope for her own relationship with her mom.

Gordon comes back outside asking for another drink (clearly inebriated) as the crew watches on. Wendy pulls Karen and Eddie to the side and Gordon seems to zero in on Ashley. Gordon begins making jokes about going to sleep, which is a dig at Ashley from last week’s verbal altercation. Ashley’s trying to ignore this man, but things are going south quickly! Gizelle Bryant attempts to warn Gordon that he’s going down the wrong road, but G insists he’s only having fun. Gizelle reminds G of the problem on the bus earlier, and Ashley had to reiterate the issue she had with G picking on her. Gordon irritates Ashley as he pretends not to remember the events from earlier, and Ashley throws a jab by asking if G has Alzheimer’s disease.

Mia didn’t appreciate Ashley’s comment and tells Ashley that’s not okay. Gordon doesn’t need Mia to defend him, but Mia feels like since Ashley’s also married to an older man, that her comment was unacceptable. Ashley gets upset and says she isn’t ageist while Gordon apologizes for his antics. Ashley doesn’t feel it’s a genuine apology, but Gordon stated his peace. The couples look on as they enjoy their cocktails while Wendy and Eddie stuff Karen in a fake cake. Mia isn’t letting the Alzheimer’s comment go and Ashley shades Mia for mispronouncing the word. Mia cuts the BS and asks Ashley where her husband is! Ashley responds that Michael is at home with their children, and Mia responds with “Are you sure?” Of course, Candiace Dillard-Bassett loves this exchange, and thinks Ashley is puffing her chest up without thinking someone will puff back!

Gordon asks Ashley if she needs a hug and Mia chimes in that Ashley needs some d**k, smh. Ashley enlists the hug she needs from Robyn, and Mia wonders why she hasn’t met Michael yet. Wendy and Eddie struggle to carry Karen and Gordon apologizes once more. The Osefos have a surprise for Ray and Karen jumps out to Ray’s delight. Gizelle feels like Karen should’ve been naked, and then quickly regrets that she put that image in her own head. Wendy rates her hosting skills as a 10 across the board and believes she had done her job. Mia tells Gordon that she was defending everyone with Alzheimer’s as everyone heads inside from the cold. Robyn gives the trip a negative five and labels Wendy as a “terrible hostess,” as the trip comes to an end.

Back in Potomac, Wendy and Candiace meet up for a visit as they reminisce about the trip. Both ladies had a great time and Candiace thinks Gordon is a lunatic! Mia and Gordon chat about how much fun they had as a package arrives at the door. Karen’s invitation has arrived for the ladies and Karen is very proud of how they turned out. Juan Dixon (making a rare appearance) attempts to open the invitation and finds out there’s something alive inside! Mia braces herself for what’s to come and everyone is collectively surprised at the butterflies inside. The ladies scream and run away from the invitation, and the reactions bring me pure joy! Mia sees where Karen was going with her elaborate invitation and is excited about their upcoming renewal. During the trip, Mia was worried about her kids with her mother, and it’s revealed that after they returned from the trip, they got into a little argument with Mia’s mom.

For their eighth wedding anniversary, Gordon planned a staycation for Mia, but Mia’s mom kept interrupting their romantic evening. Gordon called his mother-in-law and asked her why she couldn’t figure it out and allow them to enjoy their evening. Clearly, that didn’t sit right with Mia’s mom, and she hung up in Gordon’s face! Being overwhelmed and unable to decide what to feed the kids, Mia opted to return home only two hours after leaving. Once they returned home, Mia’s mom went in on Gordon. Mia doesn’t allow that type of altercation to occur in front of the kids, so Mia’s mom stormed out and left. Mia’s childhood trauma has been triggered by her mother’s reaction, and now Gordon doesn’t want to leave the kids alone with her. Mia’s disappointed but will not allow her kids to experience the abandonment that Mia had to endure.

Across town in her boot and all, Gizelle takes her daughters out to check out plants for their driveway. The girls like the changes to the house and Gizelle is finally putting the finishing touches on “Hotel Gizelle.” Gizelle asks her daughters if she should bring a date to Karen’s vow-renewal, and she receives mixed answers. Gizelle’s daughters don’t want her to die alone and the admission shocks Gizelle! “It’s starting to look like that,” Adore says while cementing their opinion of Gizelle’s love life. Gizelle admits to casually dating and not wanting a serious relationship. Grace thinks Gizelle is dating for fun and the four sit to have a deeper conversation. Gizelle admits to her girls that she’s been emotionally unavailable in relationships and doesn’t want her daughters to be emotionally numb once they start dating.

Grace reveals to Gizelle that they don’t get to see good examples of a relationship because they don’t see their parents together or dating anyone. Grace explains it’s hard to look up to her parents and Gizelle realizes her kids’ views on relationships are worse than she thought. The twins don’t remember Gizelle and Jamal Bryant being married and Gizelle finally sees the walls she’s built around herself all these years. Gizelle tells her girls that it’s okay to talk about how you feel, and the girls compare her to a vampire! Across town, Ashley arrives at her therapy appointment with baby Dylan in hand. Ashley realizes the trip took her out of her peaceful bubble, and now she wants to reel the happy feelings back in. Ashley discusses her sex life with Michael and that she’s worried his sexual needs aren’t being met.

Ashley offers but Michael doesn’t have the capacity for intimacy. The therapist assures Ashley that Michael may not need sex right now and Ashley realizes she should trust Michael. Ashley still loves Michael but remembers the infidelity that occurred last year. Ashley’s therapist suggests checking in on the relationship twice a month, and to spend some alone time with Michael. Ashley admits to losing her romantic side during her motherhood journey and opts to increase the adult time in her marriage. Taking promotional pictures for her brand, Wendy chats with her mother about Eddie’s support and business plan for Wendy’s home essential line. Wendy and her mom briefly chat with the photographer about the expectations of African children.

Wendy takes this time to express her feelings regarding her mother forcing her into certain career paths. Wendy explains how her mother had strict requirements, that forced her to put her passions on hold in order to make her mother happy. Wendy’s mom scuffs under her breath, not agreeing with Wendy’s observation of her. Wendy’s mom has no regrets about how she raised her and tells Wendy to cry now and thank her later. Wendy feels if her mother gave her the freedom to explore, she may have achieved her dreams sooner. Wendy doesn’t let up and tells her mother how she never apologized to them as children. Wendy’s mom has heard enough as she puts on her sunglasses and exits stage left! At the Watergate hotel, Ashley has planned a romantic evening with Michael. Getting settled in, Ashley lights candles and gets dressed up for her upcoming date night.

Michael arrives and compliments his wife on her efforts, and Michael seems genuinely happy to spend time with Ashley. As Ashley feeds Michael cheesecake, she catches Michael up on the events at the Eastern Shore. Michael isn’t willing to make up with Chris Bassett and doesn’t respect Candiace’s cruel antics. Michael would rather spend time with Juan Dixon, and producers show us a montage of their bromance. Ashley shuts down the Juan talk as she blindfolds Michael and begins their sexy night together. The next day, Gizelle visits her therapist to discuss the conversation with her daughters. Gizelle remembers that she wanted to work on being vulnerable and tells her therapist the girls don’t think Gizelle is emotionally available for them. Gizelle knows she has work to do and her therapist holds Gizelle to the fire about reconnecting with Jamal. Gizelle admits to wanting her family back together and thinking Jamal looked at her with more respect. Gizelle’s therapist encourages her to have open and honest conversations with her daughters to actively bring her walls down. Gizelle has some work to do, so come back next week to see how everything unfolds next week, on a new episode of The Real Housewives of Potomac!