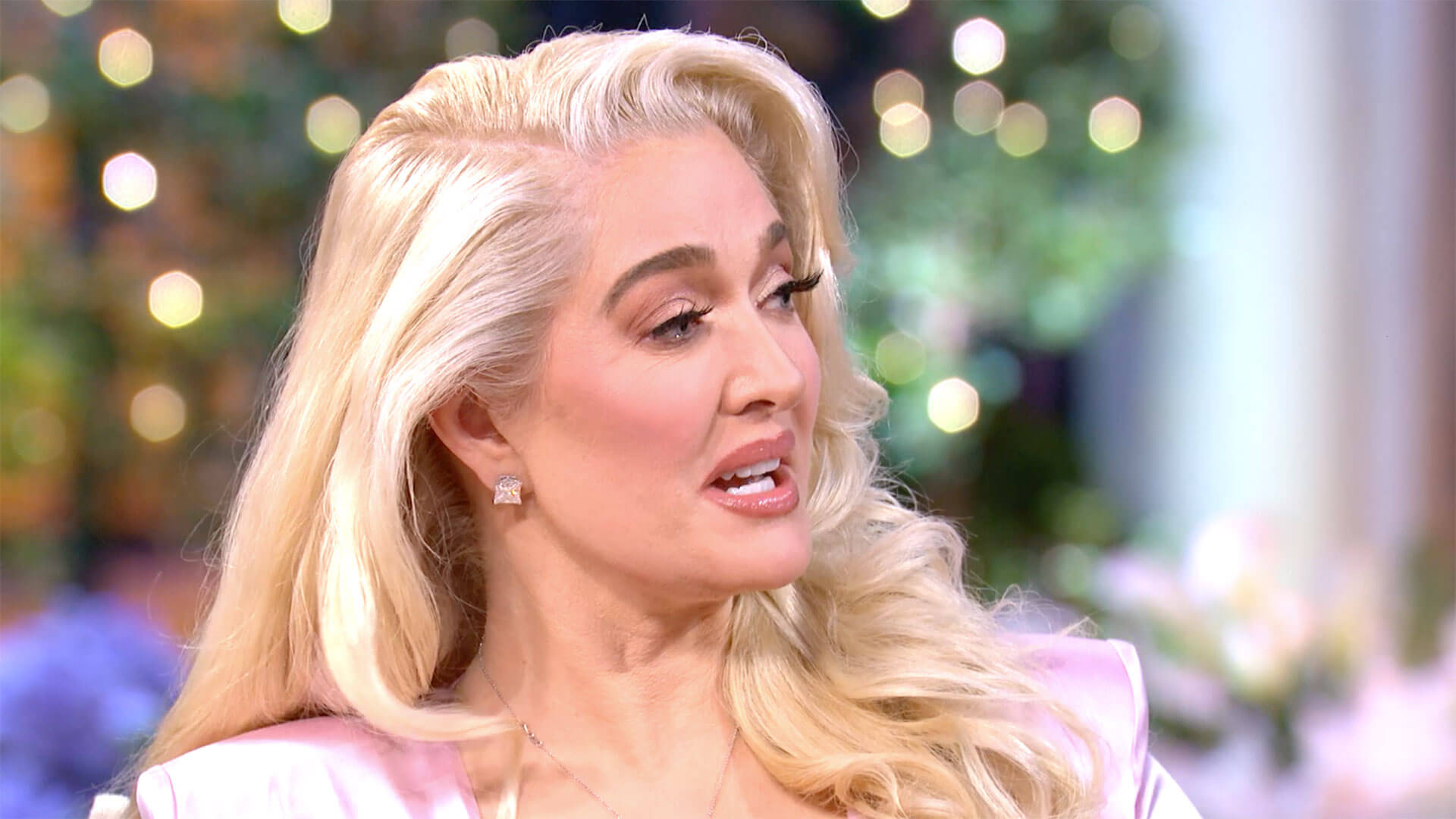 In Part 2 of the super-sized four-part The Real Housewives of Beverly Hills reunion, Andy Cohen hosts the sit-down with the ladies. Let’s see what new stories Erika Girardi tells tonight about her marriage to Tom Girardi! More is coming about Dorit Kemsley’s incessant talking. Sigh. And tonight, Lisa Rinna talks about her daughter dating the infamous Scott Disick. Now for the continued grilling by Prosecutor Andy… he’s getting IN IT!

Last week, Andy asked (in a cliffhanger) if Erika was faithful to Tom. And she says after a long pause, “Yes, up until I filed for divorce.” Footage rolls of Erika talking about her marriage on the Lake Tahoe trip, telling Dorit that she was sharing dinner every night with him during the pandemic, telling the group that Tom let her be herself, and then within 72 hours, news breaks about Erika’s divorce filing. Then throughout the season, she drops “big reveals” about affairs, his resistance to dealing with his alleged mental decline, and other stories.

Andy goes straight into peppering Erika with questions about her marriage and the rosy picture she painted. Andy reads a viewer question about Erika being a liar (a typical trigger for her wrath).

Andy: “Why hide the fact that you are in a broken marriage?” Erika deflects saying that no marriage is perfect over two decades.

Andy asks if she went overboard to protect Tom on the show. Erika says, “I think I highlighted the best of him.”

Andy: “Why didn’t you leave Tom sooner?” Erika responds, “Where was I going?” Erika claims that she wasn’t in charge of her finances. She only had two credit cards. And even though Erika questions who she could call, Sutton did offer her financial help. Erika claims that she turned over every paycheck to Tom. The other women seem shocked, but why would they be? He allegedly turned over multi-millions to her, so, why wouldn’t she turn over her paycheck to him?

Andy: “So would you say that you stayed for the money and the security?” Erika says she stayed because she “had no access” to her money.

Andy: “Do you feel you were held captive?” After a long pause, Erika talks about the imbalance of power of a 27-year-old woman and a 60-year-old man. She mentions again that all of her money was “kept” at the firm. Erika claims she didn’t stay “for the money” but that she didn’t leave because she had no access “to the money.” Then some of the women jump in to defend Erika… Kyle Richards, Dorit, Lisa.

Then Andy asks the questions that the world wants to know. “But you didn’t know that there was liability at the time.” BINGO. Erika says, “Which time?” And then says, “No, and that is a big part of this whole… all of these lawsuits that are being alleged.”

Prosecutor Andy restates the question: “Did you know there was liability when you left him? Did you feel that the ship was sinking, and you were about to go down with it, and you had to get out at that time?” Erika responds that she felt like Tom was sinking, not necessarily the ship. Erika says she was shut out completely and couldn’t get answers. Erika mentions that it wasn’t unusual for Tom to get sued, but in 2019, she was named in a suit.

Erika goes on to say that there was a wall of people around “this man.” Then Erika has a moment where she says in response to Andy’s questions about “being on the hook for this”, “I am not at liberty to say what and at what time I sought legal counsel.”

Andy reads a viewer question asking why her divorce hasn’t been finalized if there is no money to fight over. And Erika says, “Competency hearing.”

Another viewer question is asked about why Erika lied to Garcelle Beauvais about Tom’s infidelity. Erika says, “Because of who it was.” And Erika goes on to say that there were three mistresses she knew of. Erika says she confronted Tom about two, and “one that I found out about on the day that I left.” Does anyone else remember Erika’s prior account of the day she left? She said that she drove Tom to work that day, then came home, packed, and left. But that was the day when she found out there was a third woman?

Andy asks another viewer question of Kyle. “What rumors did you hear about Tom’s affairs and why didn’t you tell Erika about them earlier?” Kyle brushes it off as if she hears rumors all the time.

Andy: “Were you drunk when you posted about Tom’s mistress on Instagram?” And Erika says, “No, I was angry.” She goes on to say that she was angry that people were accusing her of hiding money.

Andy asks another viewer question about the auction for Tom’s law firm. “Please explain to me why there were lace panties in your husband’s desk drawer.” Erika says that those weren’t her panties, and they were probably a Valentine’s gift for someone else since there was a receipt in January.

Andy: “If you were kept away from your own finances, how were you able to close out parts of your life, rent a house, lease a car, and move without Tom knowing?” And Erika says “I’m not able to answer that question, but it was well within legal bounds. I did nothing wrong. But I’m not going to answer that question.”

Andy: “At Erika’s astrology party last year (2019), Tom wasn’t missing a beat. And now he’s in sudden decline? How can that be?” And Erika says, “He’s in a loop saying the same stories over and over.” Kyle chimed in that one of their common friends recognized in that moment that there was “a vacancy” in him.

Andy asks Erika if she didn’t know what he was doing, and he was in obvious decline since the accident, why would she divorce him when he’s sick? “He supported you for 20 years and when he needed your support, you left him.” And Erika says, “That’s not true.” Erika explains herself and says she protected Tom (“that man”). Erika has a fairly long monologue about how she, like everyone else, is trying to figure out what happened.

Then Andy asks about the victims. Andy asks, “What do you want people to know?” Erika says, “I feel terrible. This is not who I am, and I hope this is not who he is.” Erika says that divorce can reveal the ugly parts and hidden parts of our partners. Sutton Stracke confirms that she found out things in her divorce from the forensic accountant. Then Erika diverts to the “stories of others” who have messaged her and how she’s not alone in this kind of thing happening. Andy jumps in to remind her that most people aren’t dealing with divorce tangled up in other peoples’ money.

Now at the halfway point, Andy turns to other topics. Andy asked Crystal Kung Minkoff about her housekeeper and Dorit about her stunning yet expensive dresses. And now to the Dorit-talks-too-much part of the reunion. While she’s talking, Andy tries to truncate her. And then Andy yawns. EPIC! Dorit says, “Am I boring you?” Dorit does regret using poor words when she talked about brown people at a dinner party. Kathy Hilton and Garcelle jumped in to defend the uncomfortable but good conversation.

Andy shows footage of Domestic Harry Hamlin and Lisa during the pandemic. Everybody loves Harry. Andy then turns to Amelia Hamlin’s relationship with Scott Disick. Lisa says that Amelia ended the relationship. Lisa was glad. Lisa was so happy to finally see her mom, post-pandemic, for her mom’s 93rd birthday. Andy was excited that Harry made sauce for him. And Kyle was a little shady when she told Andy that he had better text Harry and thank him right away.

Kathy and Kyle‘s relationship is featured. They are so quirky and funny, but at the root of it is incredible love. There were years of separation and division, but they seem to have mended fences. They hug each other and start to cry. Kathy is sad about the estrangement and the lost time. Kathy was upset to see Kyle fight with her sister, Kim Richards, about Kim’s house, alcoholism, and other painful family issues. Kathy kept thinking about “what would mom do?” Both women are still grieving the loss of their mother. Kyle reassures her sister by telling her, “She’s so happy we’re together.” It was a very touching moment.

Next time, more about “what did Erika know?” It appears that Erika turns on Sutton again when the topic of “who is the victim” comes up again? Erika takes off Crystal’s head, too, just for asking a question. Chime in on what you thought of this week’s on-camera deposition of Erika.