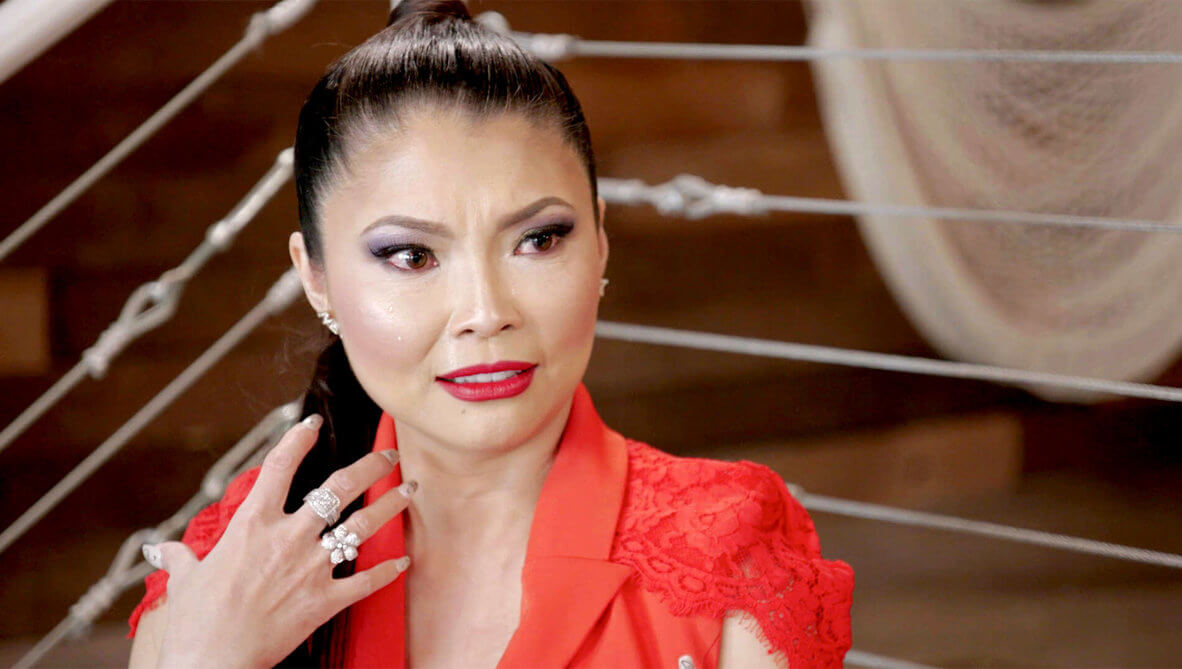 It’s hard to believe we are watching episode six tonight of The Real Housewives of Salt Lake City. So much drama has already happened this season, but there’s more to come! Last time, Whitney Rose and Lisa Barlow met to try to start over (yet again), but both promised to try to get to know each other. Tonight, their attempt at friendship is derailed again during a double date with both husbands.

Whitney is at Onyx Gym to get to know “fun Lisa.” As they learn how to swing and maneuver on the aerial silks, they nickname themselves, “Randi Star” for Whitney and “Jasmine on the magic carpet” for Lisa.

Mary Cosby finds her husband, Robert Cosby Sr., in the kitchen. He’s been gone for a long time, staying at another one of their properties during Covid. Mary admits she really enjoyed him being gone. While he’s cooking, she’s annoying him. She says they spend a lot of time apart, and that’s what their relationship is now. But at the same time, she’s annoyed that he doesn’t know she likes long-grained rice instead of short. Oh, Mary.

Lisa meets up with Jennie Nguyen and Meredith Marks to have fish nibble at their feet at a Fish Kiss fish spa. Lisa says she’s slightly neurotic and sometimes gets two pedicures a week. Side note, Meredith’s severely cut hair is distracting. Meredith asks about Lisa meeting up with Whitney. And Lisa feels like they are making progress in their friendship.

Jennie needs some advice about something tough in her marriage. She tells Lisa and Meredith that she tied her tubes and doesn’t want more children. She tells them that she had 13 pregnancies with 3 living children and 1 stillborn child. Jennie shared that her stillborn daughter lived for about an hour and while Jennie was sedated, Duy Nguyen experienced their daughter’s death alone and he was traumatized. In their culture, to mourn a loss, a man will shave his head, and Duy came into Jennie’s hospital room the next day with a shaved head and told Jennie, “I’m very sorry I can’t protect you.” Meredith suggests that Jennie and her husband go to counseling to get resolution and communicate before they damage their marriage.

Jen Shah and First Assistant Stuart are shopping at Baranof Jewelers. Jen is shopping for something symbolic to give each of her friends to represent her willingness to move forward with their friendships. Tony the Jeweler shows Jen some snake jewelry, but as Jen and Stuart role-play on how that will feel to the recipient. It falls flat. Stuart suggests something new and fresh that will give a better impression. Tony suggests snowflakes. Much better, Tony. Jen decides to buy snowflake necklaces. Then Jen starts mentioning and counting how unique the group is saying, “We’ve got Jews. We’ve got Mormons, Pentecostals, Muslims, Catholics. Even with all of our different personalities, we come together as one, and we make something beautiful out of that, so I want something that symbolizes that. And it’s not a snake.” Isn’t it great when jewelry comes with its own monologue? For six snowflakes, it’s going to be pricey, between $2700 and $3200, but they decide to do it to keep being Shah-mazing.

Heather Gay talks to her daughter about college, choices, decisions, and tries to talk about sex. Why do these housewives from many franchises choose to have this conversation on television? Heather’s Mormon experience is that sex is discussed “when you have a ring on your finger and a Temple date on the calendar.” Ashley Gay can’t even keep a straight face when her mom tries to talk to her about sex. And Heather can’t even finish a sentence without turning bright red and laughing. Heather truly just wants Ashley to understand consent and understand desire. They end with Heather saying, “Don’t get pregnant. Don’t get a disease. Love you.”

Whitney and Lisa seemed to have turned the corner in their relationship. They worked on hanging out together, doing aerial silk aerobics, and Lisa has been pouring it on thick. John Barlow and Justin Rose are friends who just want their wives to get along. Both men credit Coach Sharrieff Shah Sr.’s prompting for the date night.

It doesn’t take long for Lisa to mention that they are in Aubrey and Marco’s restaurant. Aubrey and Marco are at the center of the Angie-Casino-Night-Catering Debacle. In the midst of their double-date night and right on cue, Aubrey approaches the table with food and to bring up Angie’s catering event. Whitney felt ambushed as if there is some plot Lisa planned for Whitney to hear the caterers’ side of the story. Whitney thinks that this whole thing is fake and staged and said it right then in the moment. Justin thinks the double date is backfiring. He just wants to eat and have fun. Lisa maintains that she didn’t do anything wrong, so she doesn’t need to apologize. John suggests that they can move on with “shots and food.”

Coach Shah is training with his son, Omar Shah. Jen tries to insert herself into their workout by asking Omar is she can come volunteer at his school. He’s grown. He’s way past the era of “room mom.” Jen’s trying to make up for her past behavior with her son, but this isn’t going to be it. Coach Shah thinks that Jen will have good intentions but won’t follow through. Do we wonder at all why he thinks that? Jen says she wants to “take him to school, pick him up, volunteer” and Coach Shah reminds Jen that Omar drives himself to school and decorating Omar’s locker is too much. This is so awkward.

Meredith and Mary decide to play indoor tennis. Mary is dressed like a cheerleader, and Meredith is dressed like a 1960s pop star. Mary tries to explain tennis by pointing out all the lines and calling the baseline the safe line. They hit a few balls and miss a few balls and it’s time for a break. They talk about the sports they did as little girls. Mary said she rode horses but didn’t ski. She says, “Black people don’t ski.” She goes on to say, “If you see black people skiing, it’s like looking at a mountain trying to find chocolate chips. You won’t find them.”

Meredith and Seth Marks seem to be in a good place. Mary talks about how her husband’s absences make her stronger. Mary tells Meredith that she and Robert Sr. don’t share a bedroom. Mary says in her production interview that if she could, she would change Robert Sr. She admits she would change all of him. Mary’s worried about their son moving out and their marriage is based on their child. Poor Robert Sr. It wasn’t shown on camera, but Meredith probably offered the same advice to Mary as she did to Jennie—counseling.

Duy and Jennie go cross-country skiing. Duy compliments Jennie that she’s a great mom, great role model, and great provider. Then the conversation turns. Duy is still pushing Jennie to have more children (and says he wants to help replenish the earth with more good people.) She shares her pain from all the losses they have experienced. Duy breaks down about what happened with their daughter’s birth on March 15 and burying their child.

Duy keeps pushing. He suggests a surrogate. Jennie doesn’t want to go through diapers and starting over. Then Duy suggests getting a sister wife. He’s serious. And Jennie is hot! Duy says it’s not uncommon in their Vietnamese culture. His grandfather had four wives. Jennie says her father had multiple girlfriends, but she doesn’t want that. She storms off.

Next time, Heather throws an over-the-top first birthday party for all of her employees who had babies at the same time last season. Jennie and Duy continue their profound divide over having more children. The ladies go snow tubing. Mary and Lisa have some kind of issue between them that bubbles up that day.