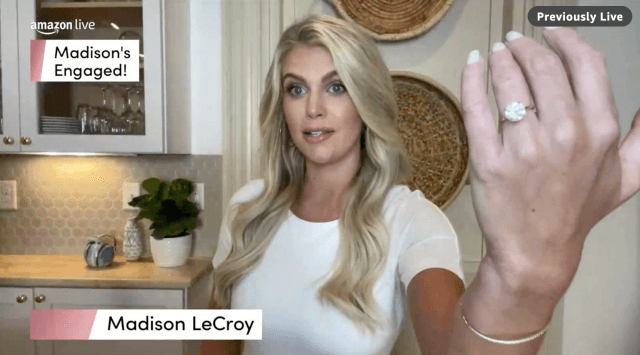 Madison LeCroy is engaged. The Southern Charm star spilled that her boyfriend, Brett, had popped the question during an Amazon Live session, on Thursday. Brett proposed after the duo celebrated the reality star’s birthday with Madison’s 8-year-old son, Hudson.

Madison told People that the timing of the proposal took her by surprise.

“We traveled a lot this summer and I kind of thought it was going to happen around then,” she told the outlet.

Brett treated Madison and her son to a fancy night out, which included a limo ride, before popping the question in Madison’s living room.

“The next thing you know, we come back home and I’m thinking it’s just a birthday dinner, and my son’s over here jumping around, and I turn around and my fiancé is down on one knee and proposed to me in my living room,” the Bravo star shared. “It was so intimate. I’ve been crying like crazy from joy. [I’m] so excited.”

The lovebirds connected for the first time in April, during a friends’ trip to Arizona. Madison explained that she knew right away that he was her future husband, and even told her friends that Brett was the one.

“He chased me out of the restaurant and he was like, ‘I’ve got to get your number and I have to take you on a date,’” Madison said.

“‘That’s him, y’all.’ I was like, ‘I’m marrying that man.’ There’s something about him that I’ve never felt before in my entire life. I knew right then,” she added.

Brett, who is based in California, immediately hopped on a plane east to take Madison out.

“He’s like, ‘No problem, I’ll fly to South Carolina,’ and he flew the next day and took me on a date,” Madison said. “[He’s] very committed and made the effort.”

Both Madison and Brett were dating other people at the time—”but once we met, we were like, look, this is it. I found my person,” the reality star declared.

Madison, who is opting to keep Brett’s last name under wraps for now, revealed that her fiancé  “doesn’t do social media.” The reality star has been sharing photos of her new beau on Instagram, but viewers will not get a glimpse of Brett anytime soon.

“My goodness, who wants to introduce anybody to your ex from a toxic relationship? So I’m going to try to protect that as much as possible,” Madison explained. “He’s not a reality TV kind of person, so he’s not going to go out there and cause a scene or anything.”

“I think my family low-key loves him more than me. I’m happy about that. He’s definitely been accepted,” she added. “And no one loves Brett more than Hudson.”

“When we asked my son, ‘What did you think the first time you met Brett? He said, ‘That he was the one,'” Madison shared. “I just lost it. I was like, ‘You are so smart, I knew that too.’”

Madison spoke about calling her ex-husband, Hudson’s father, to let him know about the engagement.

“We made sure to call him and tell him before the news broke out. He was so happy for us. He was happy Hudson really adores my fiancé,” the Charmer said. ”I’ve been lucky to have that support from my son’s father, and that’s kind of unheard of. But he was very supportive.”

Madison clarified that the couple plans to “do bi-coastal for a little while.”

“I have my salon that is opening in two weeks as well. I’m so excited about that,” she shared. “He still has his house and everything in California so we’re going to go back and forth until we find our roots.”

Madison revealed that the couple will wait “probably about a year” to walk down the aisle.

“We haven’t been dating a long period of time, but we both know what we want,” she added. “Why wait any longer?”