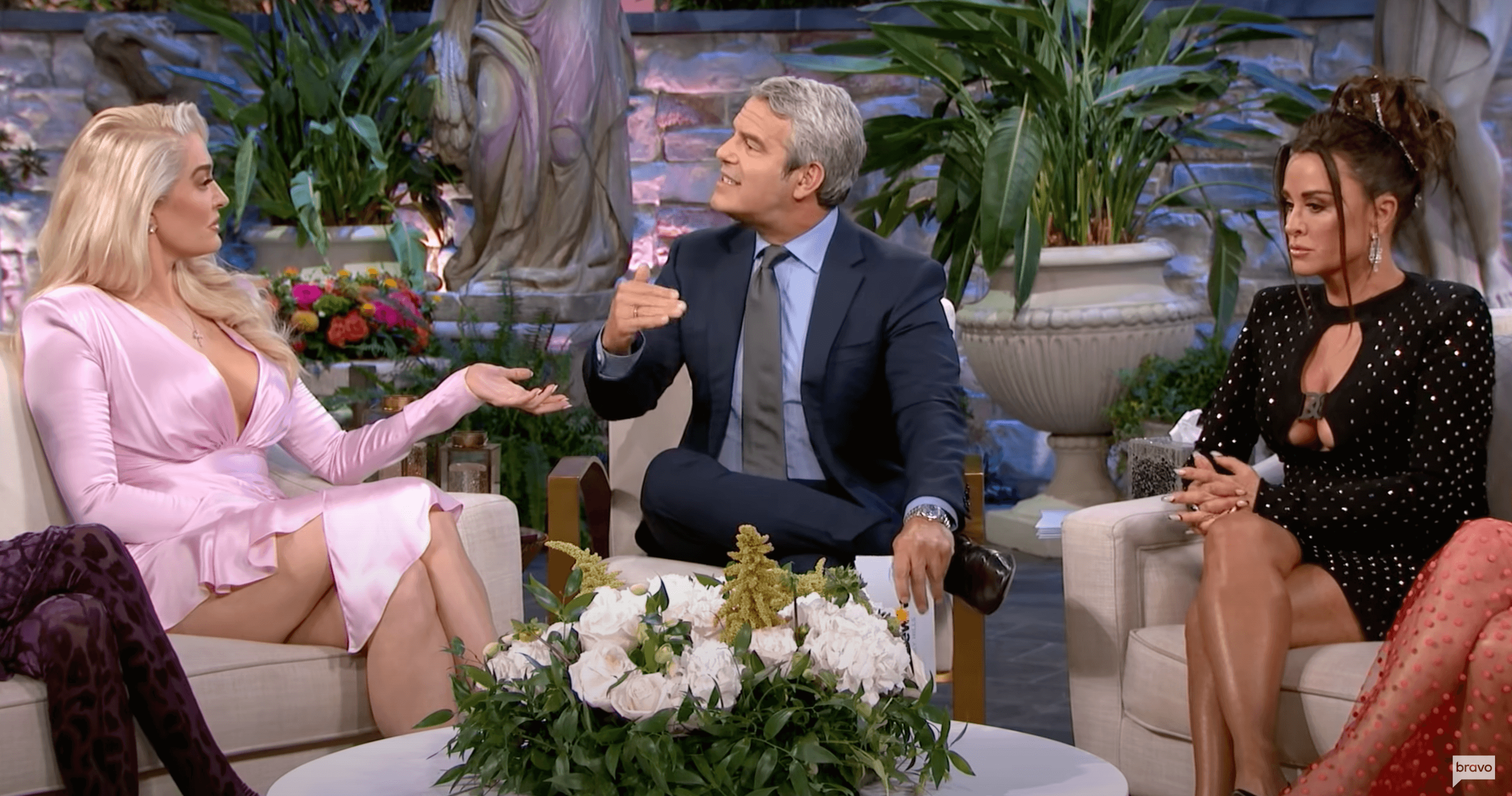 In the epic four-part The Real Housewives of Beverly Hills reunion, Andy Cohen hosts the sit down with the ladies. What new stories will Erika Girardi tell? Andy says he’s going to put Erika “on a skewer and I’m gonna fire up the barbeque.” Two weeks before the reunion, Lisa Rinna shows up at Erika’s house to dish about whether or not Erika will show for the reunion. Erika says, “Remember when you called me and said, ‘these girls have flipped on you’?” Lisa says, “That will come up at the reunion.”

In the introductions and greetings, Andy asks Erika how she is feeling about addressing things going on in her life. Erika says, “I’m happy to do so. I’m happy to say everything I can say. Please understand there are some things I cannot answer, but I will do my best to give every part of the story that I can.” Andy asks Erika what she thinks are the biggest misconceptions about her. She says, “There’s a lot of talk about me being cold and a lot of talk about me not having empathy and sympathy. The truth is, I do. But I’m in an almost impossible situation. And anyone that has been wronged, I want them to be made whole.” She says she is talking about “the alleged victims of all of Tom’s alleged misdoings.” 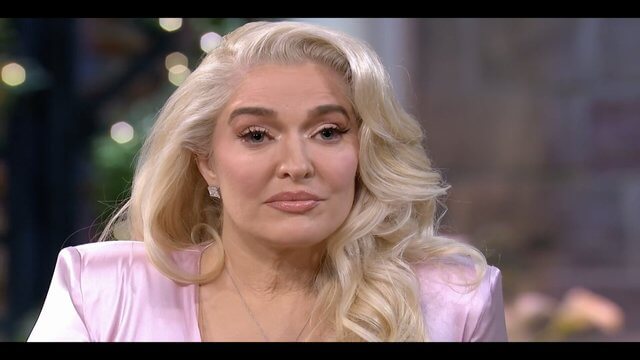 Andy asks Erika what it was like watching the show air and what were her feelings about the other women and their reactions to the news accounts. Erika says, “Disappointment, anger, sadness, and then some hope and some love and some support.” Right away, Andy brings up that Sutton Stracke spoke to an attorney about the situation. Andy asks who else did the same, and Crystal Kung Minkoff did and so did Kyle Richards.

Andy wonders if Erika’s attorneys advised her to quit the show. And Erika says, “They did. And then I said no because I have nothing to hide.” Erika goes on to say, “Everything can be parsed, twisted, turned, and yes, possibly used against me whether it’s true or not, it almost doesn’t even matter at this point.” Andy asks if she stayed on the show because she doesn’t have Tom Girardi’s money to rely on and this is her main job. 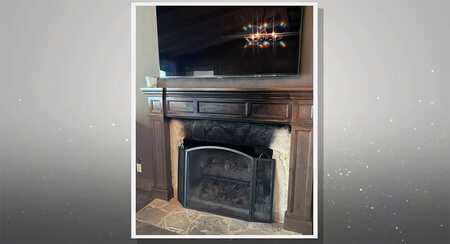 Sutton moved into her new house after almost a year of living in Kyle’s old house. Kyle says Sutton was a great tenant but almost burned her house down. Sutton turned the fireplace on, and Kyle shows a picture of the black soot around the stone and the mantle. Sutton says she will pay for the repairs.

Andy starts in on the love lives of the single ladies. Erika is looking for some big d. Sutton and her boyfriend broke up on Valentine’s weekend. The only thing he said was, “I just can’t.” Andy asks Garcelle Beauvais if her boys have come around to the idea of her dating. Garcelle thinks that was just a moment for the teens, and they will turn it around if they see her happy.

The questioning turns to Garcelle and “did The Real host have some fake friends?” Most of the footage shows Garcelle feeling left out of the group and her darts thrown at people. Does it seem like the ladies just don’t get her sense of humor? Garcelle was pleased that Dorit Kemsley and Lisa talked to her after the vulnerability of the Del Mar trip and saw her in a different light. Dorit gives a long-winded answer, again, and says that she thinks Garcelle had this vulnerability possibly “to be relevant.” And Garcelle speaks up right away to shut that down. Dorit is still upset at what happened during the season. Garcelle wants an apology for being called a bully. One of the viewer questions said that Dorit was trying to paint Garcelle as an “angry black woman.” And Dorit, again, goes on and on. Dorit is also upset that Garcelle jabs in the confessionals, but not to her face. Rinna jumps in to agree with Dorit. Everyone takes jabs in the production interviews, and Lisa says, “You seem to do it the most. You are the most comfortable doing it.” Dorit gets fired up.

Garcelle and Dorit dredge through “she talks too much” again. Garcelle says that she can’t win. Dorit says she wants her to be direct and not throw darts and accuses Garcelle of throwing darts. Garcelle said that Dorit talks too much, but then Garcelle is upset that Dorit went for her integrity by calling her inauthentic and a bully. Lisa butts into the conversation when Garcelle says that she is able to set things aside. Lisa disagrees with that. They spar a bit and Rinna says, “Don’t you tell me to do anything.” 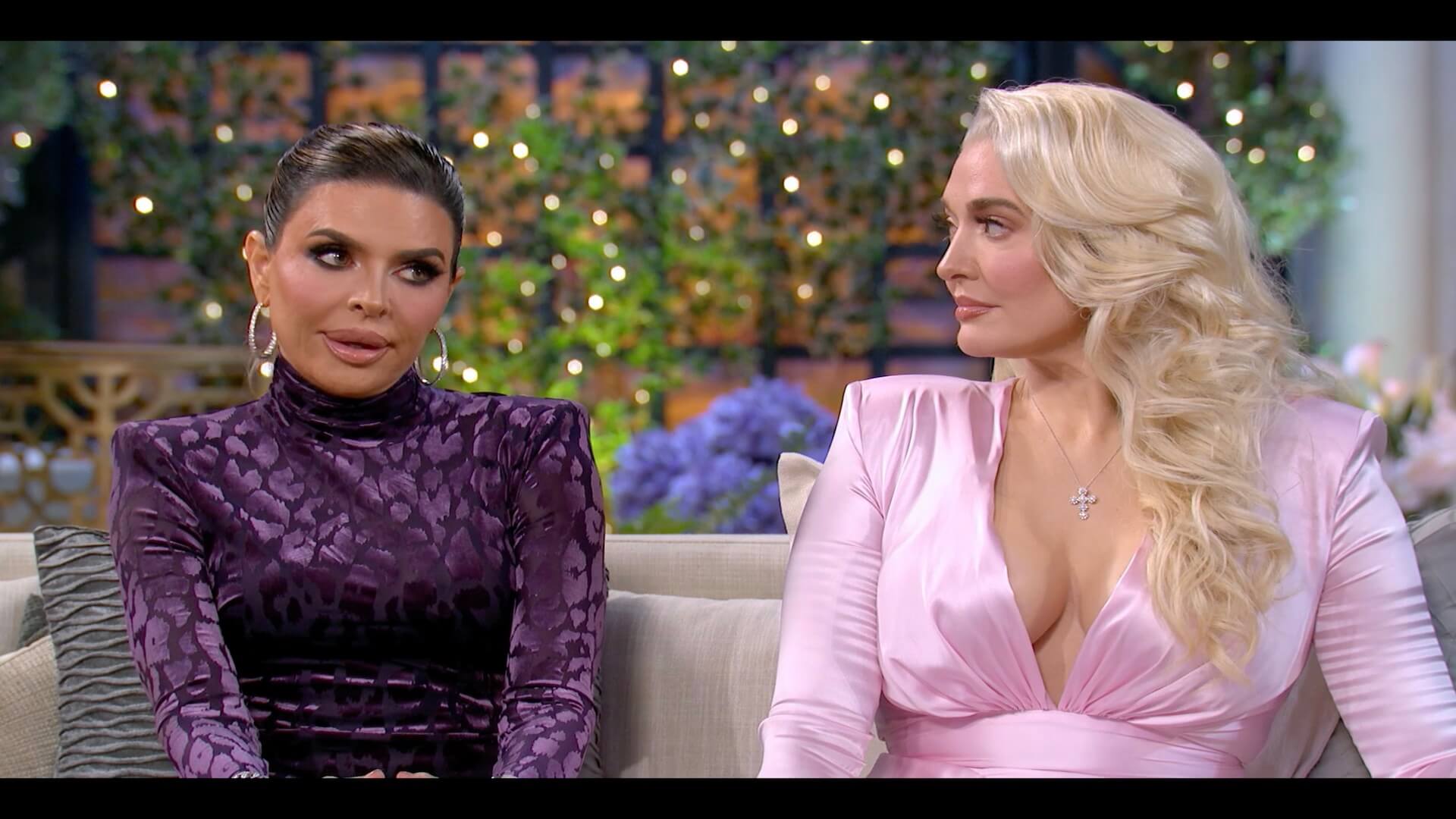 As they move on to other times when Garcelle threw darts, Dorit starts yelling, “Let me finish, Garcelle.” Dorit says the ball is in Garcelle’s court. They both say they want to move on, but after this exchange, that doesn’t seem likely.

Lisa is trying to earn back her friendship with Garcelle after what happened last season with Denise Richards. Garcelle says that Lisa had a birthday lunch for her and brought her more of Harry Hamlin’s bolognese sauce. Garcelle admits that she isn’t sure how she felt about Lisa and whether she was being authentic. Lisa wants Garcelle to stop bring up Denise. And Garcelle says she’s done with it.

Sutton says that she and Garcelle have talked about how Lisa treats Sutton, too. Garcelle also throws into the conversation that she heard that Lisa said that Garcelle shouldn’t bring race into the show. Lisa denies it, but Garcelle isn’t sure what to think because she doesn’t trust Lisa. The conversation turns to whether or not Garcelle “checks out,” and Garcelle says, “I show up.” And Erika chimes in, “So do I!” Lisa jumps over to Garcelle’s couch and they try to mend fences. 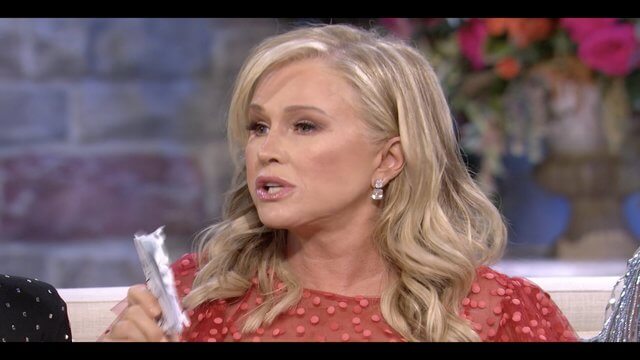 Kathy Hilton arrives and brought notes because she “wanted to address a few things.” Andy asks her if she recognizes the set, a mock-up of her estate. Kathy says, “I don’t know.” It took her a minute. After making some appearances through the years, Kathy agreed to join the show because Kyle pushed her. Kathy punked Kyle earlier in the day by having Kyle’s driver show up with a mask and a knife to scare her.

Andy switches from the lighthearted Kathy and Kyle vibe to ask Erika more questions about her marriage. Andy said he’s still blown away that Tom hadn’t read Erika’s book and Tom hadn’t gone to New York City to see her in Chicago. Erika tells another story about confronting Tom about cheating. She says that she said to him, “If you are in love with someone else, divorce me and go be with her.” Andy asks if Erika was faithful to Tom… cliffhanger.

Next time, Rinna brought Harry’s sauce for Andy. The sparring continues. And the showdown between Erika and what each of the ladies (not Lisa) said all season about Erika continues.

Any thoughts on Part 1?