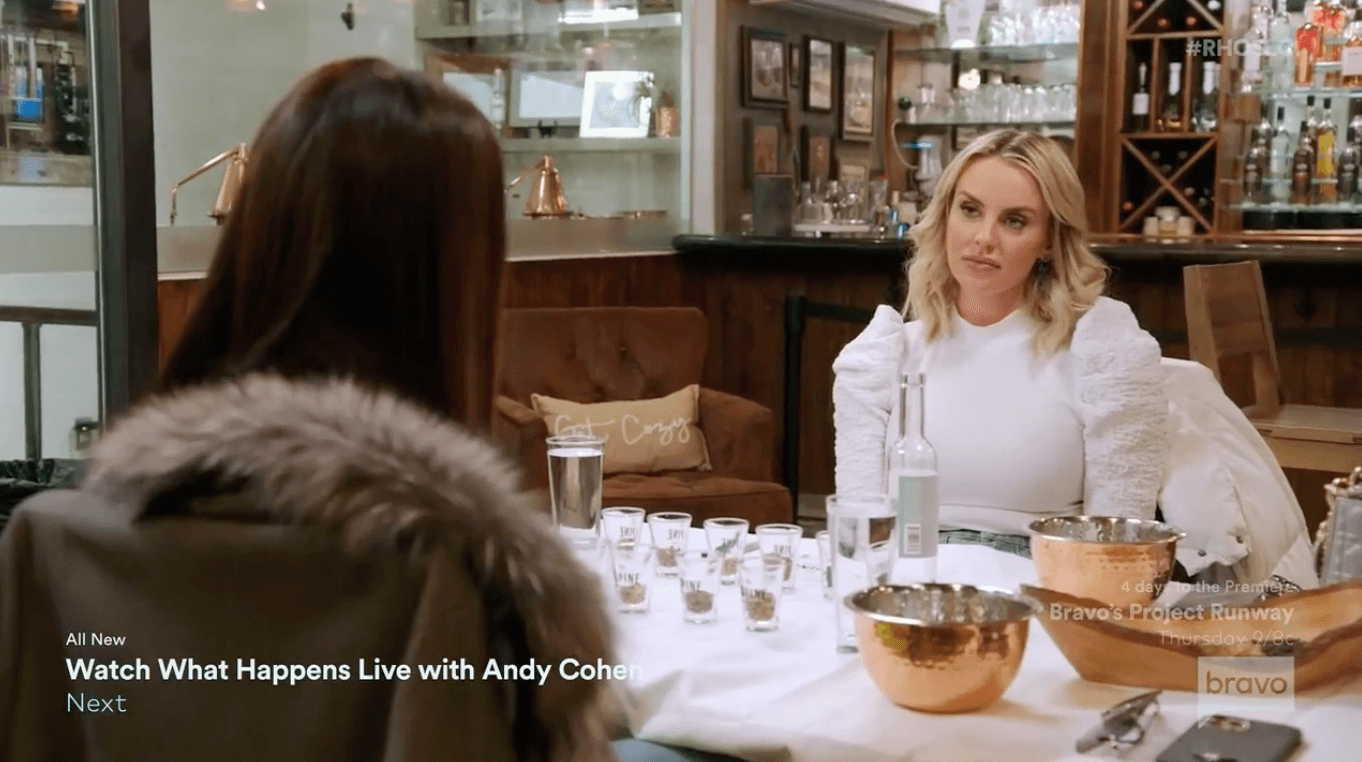 This week on The Real Housewives of Salt Lake City does the fallout continues from caterer-gate? Did Lisa Barlow sabotage? Didn’t Lisa sabotage?

Lisa and John Barlow sit down to talk about the casino party. John’s first statement, “I still don’t fully understand last night.” Lisa thinks Whitney Rose is interjecting into her friendship with Angie Harrington, thinking that Whitney is instigating something. John says, “I don’t know if this is devil’s advocate or not. Do you think if you get together with Whitney, you can work it out? It’s possible.” In John’s production interview, he says, “I like hanging out with Justin [Rose], so I’m hoping for the best.” Does anyone remember a time when a husband did a production interview? That could be an entire series… Housewives husbands we wanted to hear from… Juicy Joe, Mario, maybe even Jacques about the pirate.

Whitney’s getting her kids started on homework when Mary Cosby comes to the door with homemade cookies. Whitney seems stunned that Mary can bake and suggests Mary give her family a baking lesson. But Mary says she’s too tired, and then in front of the children starts telling a terrible car accident story of one of her parish members. She says that a member’s daughter had a crash… ejected from the sunroof… fell down into a neighborhood. And then after telling Whitney’s kids that the girl passed away, she says, “I’m excited to be here. Wear your seatbelt.” Wow. Whitney quickly ushers Mary away from the kids.

Heather Gay’s daughter Ashley Gay is waiting to hear if she’s accepted into college at UCSB—University of California Santa Barbara. She got in! It’s the confetti notification.

Now it’s time for the Jen–Brooks great apology tour. Jen Shah arrives at a restaurant with Second Assistant Murilo. Meredith Marks and Brooks Marks arrive. Brooks sends his mom off so that he can talk privately with Jen. Immediately Jen makes it sound like Brooks took things the wrong way, rather than Jen shouldn’t have said what she said. Then Jen blames her “team” for how they run her social media. Brooks tries to explain how painful it was to hear the same taunts from his childhood. Jen is still making excuses and blaming Brooks for how he feels. And even after her non-apology, Brooks doesn’t want her to be upset. He’s a kind person caught in this spiderweb of deflection and immaturity that is Jen Shah.

And now for guys’ night out! Coach Sharrieff Shah Sr., Seth Marks, Justin, and John meet up. They start off their conversation with a round of “still married?” Even though they all think it’s not a good idea to talk about the wives, Justin says right away that their sex life has been “on pause” since Whitney is so busy (and Lisa will weaponize this when she hears it). Then Seth says, “I can have sex with Meredith any time I want as long as I don’t wake her up.” Coach Shah just wants the wives to have peace, and Justin says they are the most optimistic guys in the world.

Jennie Nguyen is meeting Whitney for lunch. Whitney is growing her business and seems overwhelmed and overscheduled. Jennie offers another thought, that she downsized to spend time with her children because she missed so much of their childhood. Whitney says that she has always wanted more children, but it’s not going to happen because Justin got a vasectomy. And Jennie tells Whitney that it’s her husband (in his 50s) who wants more children, and she (in her 40s with her tubes tied) does not. Jennie is enjoying that her youngest is 9 and becoming independent.

Whitney enjoyed getting to know Jennie better. And even though Jennie is Lisa’s friend, Jennie is open. Jennie says Lisa is fun to hang out with. And Whitney hasn’t really seen “fun Lisa” and thinks maybe “good Lisa” is like Bigfoot. Jennie suggests that Lisa and Whitney start over. The husbands get along, so maybe the women can figure it out.

Meredith and Heather meet at the ski slopes. After skiing for a bit, they sit down for Irish coffees and charcuterie. They talk about sending Ashley off to college. Heather asks Meredith about how Meredith handled sending Chloe Marks off to college. Heather says that she has been raising her kids as if she’s still a Mormon and the girls will be virgins until they are married. Heather hasn’t talked to the girls much about sex. Meredith is encouraging Heather to talk to her girls. “The last thing you want is for them to be afraid to talk to you.” Meredith always was very open and gave her kids condoms. Heather’s having a rough time not knowing how to bridge the gap between what she told her children their whole lives (and what she was told) and what might make them happier.

Lisa and Whitney AKA “This” have their showdown over gin at Alpine Distillery. Lisa wants a new beginning. Lisa thinks that she and Whitney are friends, but Whitney thinks they are not. Lisa launches right away into how Whitney is misinterpreting her intentions. They order apple and pecan pie, but Whitney is allergic to pecans. Lisa makes a joke about “we don’t need an epi-pen, do we? Well, depending on this conversation, we’ll see if we need one.” The joke falls flat.

Whitney asks, “When you say very rude things, how am I misunderstanding your intention?” Whitney keeps going. And Lisa keeps getting more defensive. Lisa says she doesn’t feel any anger or hostility toward Whitney. Whitney tells Lisa that she is upset and angry and bothered by Lisa’s treatment of her. Whitney wants to leave the past in the past and move on. They agree to give each other the benefit of the doubt when tough things come up.

Next time, Heather tries to talk to her daughter about sex. Lisa, John, Whitney, and Justin have a double date, but Whitney feels like the location is a setup for more drama. And the conversation continues where Duy Nguyen wants more children and Jennie does not. So, Duy suggests getting a sister wife.