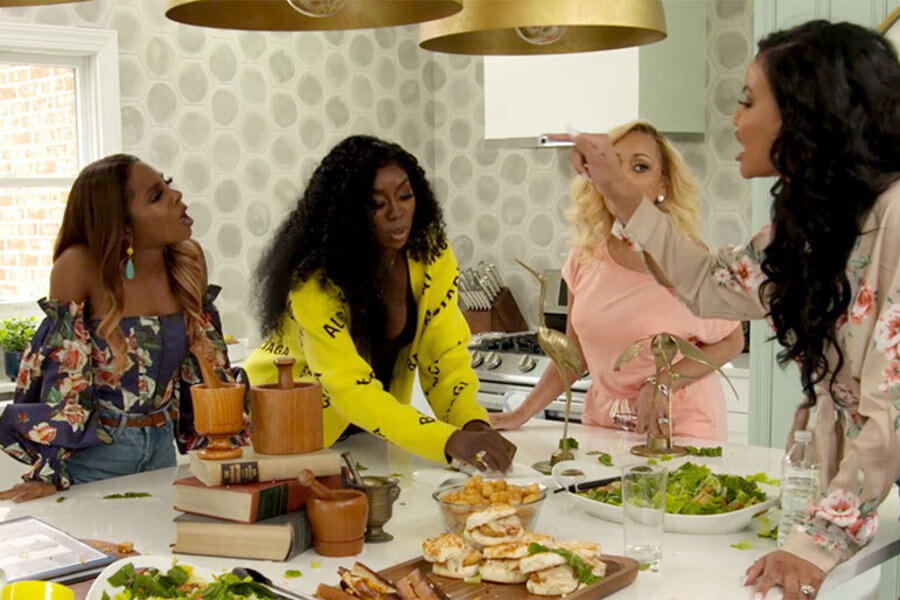 Welcome back to a brand-new episode of The Real Housewives of Potomac! We left off in the continuation of chaos between Candiace Dillard-Bassett and Mia Thornton. After Mia tossing the salad into Candiace’s face, the pit bull-in-training became more enraged! Candiace knocks over a few more items on the table, as Askale Davis begs her to stop. Wendy Osefo is more worried about lettuce getting into her good wig, and Karen Huger is fed up with the nonsense. Once the two are briefly separated, Karen tries to talk some sense into Candiace, but there’s no use. Ashley Darby is on Mia’s side by reiterating that Candiace doesn’t know about the hardships of Mia’s mom. Eddie Osefo and Chris Bassett see the commotion from outside and decide to go check on their wives.

Mia tells Candiace that she needs therapy before taking a breather with Gordon Thornton. The men are laughing about the situation as they play pool, and Wendy comes in to ask the men to help regulate the situation. The group attempts to convince the Thorntons to stay, and it appears that Askale is the only one on Candiace’s side. Chris comes to rescue his spoiled brat and tries to talk her down for the umpteenth time. Karen and Wendy sit down with Mia to console her, and it’s clear that Candiace’s words were ruthless and nasty! Mia is afraid of her mother relapsing and believes Candiace’s words are dangerous. Candiace continues crying to Chris outside, and Askale shares that Mia’s “low-budget” comment hurt Candiace’s feelings.

Mia doesn’t know what to do about Candiace’s comments and what her words could potentially do to her mother. Candiace doesn’t feel she’s wrong and Chris continues talking sense into her. Chris told Candiace to shut up in the most respectful way, but I really wish he told her to ST*U. Karen checks in with Mia and Gordon is still drunk. Gordon tells Karen she looks good as he licks his tongue out at her. Karen quickly exits the room as Ashley comes downstairs. Ashley checks if Mia is staying, and Gordon reveals he used to pay Mia for her conversation. Karen begins picking her room and Askale checks on Candiace as she fixes her makeup. Chris is cleaning up the ladies’ mess as Ashley checks on her breastmilk.

Chris compliments Ashley on her motherhood journey and wishes her and Michael well. Once everyone picks their rooms, the ladies gather in Ashley’s room for a chat. Karen’s ready to go home already. Askale and Wendy join the conversation and Karen learns the meaning of “tossing the salad.” Mia checks in on the kids as the rest of the couples get prepared for dinner. Gordon took himself a power nap and Ashley’s calling the green-eyed bandits for backup. Robyn Dixon and Gizelle Bryant arrive together and Gizelle is still suffering from a broken toe. Robyn reveals Ashley’s guilt trip got to her and they want to support her. Ashley provided a rundown of the salad toss and now Gizelle wants to know more. Chris helps Gizelle to her room and Gizelle is not happy with the accommodations.

Candiace greets her favorite friends and provides her version of the altercation. Attempting to downplay her role, Candiace thinks her comments were an equal rebuttal. Gizelle is not with Candiace’s actions and wants to know where the two are at the moment. Wendy greets Gizelle and Robyn and has the fakest smile in the world! Wendy is not engaging and being nice-nasty. Gizelle inquires about the bathrooms and the two share a snide moment. Ashley breaks the ice by bringing welcome shots and the party begins! Robyn is über upset because she’s on her menstrual (TMI) and doesn’t want to be bothered with anyone! Just complaining, ugh!

Eddie and Wendy are in matching outfits, and everyone is dressed for dinner — besides Gizelle. Gizelle is in a hoodie and a boot and must’ve decided not to try. Candiace and Mia somehow got seated together and are trying to ignore each other. Gizelle and Ashley give Karen the rundown on what “tea-bagging” is and Gizelle is enjoying her light moment with Karen. Arriving at dinner in style, Wendy gives a speech and thanks everyone for coming. Giving the crew a rundown of what’s to come, everyone’s excited about the upcoming crab boil. After placing their orders, Ashley attempts to set Gizelle up with one of the men seating behind them. Gizelle’s not feeling it in the boot and declines to inquire more.

Ashley shares with the group how well Michael is doing with the baby, and how his assistant came to help feed baby Dylan. Gordon is still drunk and thinking Ashley said the assistant breastfed the baby. After correcting G, Mia gives him a little PDA, as Robyn asks if there are any hotels nearby. Robyn, being miserable as always, tells the table that she’s on her cycle (again) and a group of men bought the crew some shots! Before they were able to enjoy their drinks, the ladies find out the men’s wives are at a separate table, in the same room! Wendy, being a gracious host, buys the wives a round of shots, and all is corrected. Karen thanks the men for their shots and brings up her upcoming vow renewal, before dropping some gems on them. Karen believes their wives deserve something nice for the lapse of judgment from their men, and I couldn’t agree more.

After returning to her seat, Ashley asks Chris about how he felt about Candiace’s altercation earlier. Ashley wants to know if he should’ve come in and de-escalated the situation. Chris wants everyone to get along and get to a place with Michael where they are good. Ashley informs Chris that Michael has some questions about how Chris handles himself in public, just as when Michael has issues with Chris’s actions. Candiace is stuffing her face with oysters as her man takes on the wrath of Ashley’s inquires. Chris doesn’t think he’s said anything negative about Michael, but a flashback shows Chris at the reunion questioning Michael’s behavior. Ashley brings up the comments that Candiace has said about Michael, and Candiace comments that she was only responding to Michael. The rest of the crew is enjoying their food, as a flashback shows the multiple comments Michal made about Chris.

Candiace chimes in that Michael calls Chris “white trash” and Ashley jumps in and reveals that Candiace called Michael a “slave-driver.” Producers show us receipts from Candiace’s Twitter page where she called Michael an “overseer..” This is going way too far, now. Ashley asks why she called Michael that and Candiace responds, “because he drives his slave around.” Candiace has officially dug her own grave. Ashley rightfully blows up and asks, “Are you calling me a slave?” Chris says no and tries to get Candiace in check. As the altercation escalates, the Osefos ask each other how their food is and seems unbothered by the mess unfolding. Ashley hits the nail on the head when she tells Candiace that she doesn’t know how to be a civil human being.

Ashley makes it known that Candiace provoked Mia by putting her hands in her face and tried to use the issues of last year to validate her position. The common denominator in all these issues is Candiace, and now Candiace wants to blame Ashley for the entire Monique Samuels situation! Gizelle’s finally had enough and steps in to defend Ashley. Getting more riled up, Chris tries to separate Candiace from the intense situation, but sis is not budging! Chris walks away from his wife and her shenanigans, and Candiace thinks Ashley got involved to be a vindictive b*tch. Wendy tries to get the group back on GVO (Good Vibes Only), but Candiace says Ashley can “suck my d**k.” Dre Davis goes to check on Chris and he’s fed up with the group’s issues. Wendy’s upset that her trip is ruined and calls them all “raggedy h*es” and Mia tells Wendy she’s the raggedy one. Bringing up how none of them are acting within their character, Candiace warns Mia that this isn’t her fight. Candiace tells Mia to behave with her finger in front of Karen’s face.

Karen tells both of the ladies she will bite them if another finger goes in her face, and Candiace goes to apologize to Chris. Chris wants Candiace to be the bigger person, but we all know that will never happen. Gizelle and Ashley aren’t happy with Candiace’s actions and don’t think Candiace learned anything from last year. We all think the same thing! Robyn thinks Candiace is holding onto things from last year and the Bassetts head back to the table. The entrees arrive and Karen lets it be known that this peeing contest is far from over! Whew, come back next week to see what else unfolds, on a brand-new episode of The Real Housewives of Potomac!