Welcome to the recap of The Real Housewives of Beverly Hills season finale leading up to the four-part reunion. Crystal Kung Minkoff hosts a Chinese New Year party for the housewives and spouses. Garcelle Beauvais still struggles with her friendship with Lisa Rinna—challenging Lisa to reach out to Denise Richards. And Sutton Stracke wants to really have peace with Erika Girardi, but will the Ice Princess allow it?

As Dorit Kemsley arrives back at Beverly Hills from the trip to Del Mar, she gets a fashion critique from her little girl. Harry Hamlin is excited to head to Canada to stay in a remote cabin where the only way in and out when it snows is snowshoes. Erika and Crystal meet at a restaurant, Shan Social House, to preview the location of Crystal’s Chinese New Year party. 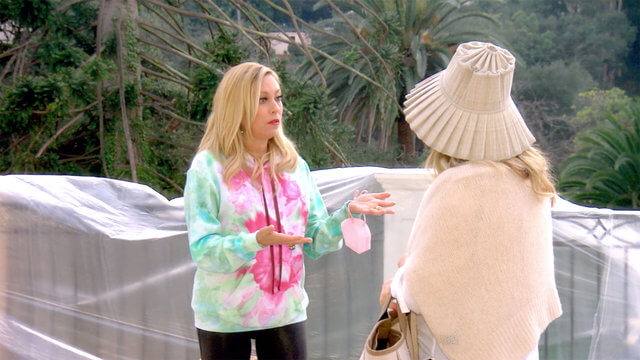 Crystal says in her production interview, that “one of the Chinese superstitions on New Year is to not fight because whatever happens on New Year will represent your next year.” Erika says she’s not angry with Sutton, but she is not over it. She says, “I will remember who was with me and who was against me.”

Kathy Hilton (and her lampshade) gives Sutton a tour of her new 18,000 square foot, $53 million project house. Kathy and her husband planned to move there but then changed their minds. Sutton tells Kathy that it was strange that out-of-the-blue Erika just started talking to her in Del Mar. Sutton thinks it’s not going to last, given how threatening and angry the attacks have been from Erika.

Erika, Dorit, Lisa, and Kyle Richards meet for lunch. Kyle’s $22,500 Hermes bag has its own chair. Dorit is feeling slighted that her $4,850 Louis Vuitton bag doesn’t have a spot. Kyle orders a drink that comes with a test tube of purple liquid. And immediately Kyle asks Erika how she feels about Sutton. And when Erika says that she’s ok with the situation, Kyle stirs the pot by saying that Sutton “still thinks that you haven’t been honest about the car accident.” And Erika says, “F- that bitch.” Erika starts to recount the story of the car accident, pauses during her retelling of the events, but then contradicts herself again. This time she says that her son was with her, and THEY found Tom Girardi. In La Quinta, she said that SHE found Tom, and no one knew about it. She goes on to says that her son came off duty and helped her find Tom. Judge Judy Sheindlin says, “If you tell the truth, then you don’t have to have a good memory.”

Erika is saying that she won’t be called a liar. “You’re going to tell me I’m a liar, bitch, do you want to get socked in the f-ing mouth?” Then Kyle wants to tell Erika something but doesn’t want her to get mad. Kyle brings up the Instagram posts that seem provocative and callous about Erika’s current situation. Kyle’s concerns are brushed off when Erika says that she’s trolling the trolls on social media. Even though Lisa has experienced that backfiring, Lisa doesn’t say anything in that moment.

Garcelle finally went on her date with Keith, but she says that “he just wasn’t her type.” It was a “tailgate date.” She says that he was a nice guy, but he wasn’t for her. Maybe it would have been better without the cameras. Her glam squad was equal amounts of both supportive and shady. 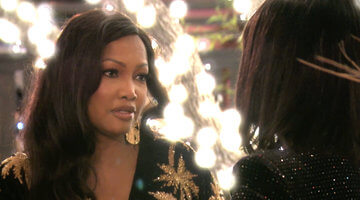 As they are getting ready for the party, Crystal calls Sutton, and they seem to have put everything aside from earlier to focus on having more fun together. The event space is festively decorated. Crystal’s dress is beautiful. Robert Minkoff seems happy to see everyone. Crystal’s mom, Tina, and Tina’s boyfriend, Marshal arrive. Kathy arrives with her friend, Elliot Mintz. Lisa and her wig, Uma, arrive solo. Lisa and Elliot have history at another Real Housewives party years ago at Dorit and P.K. Kemsley’s house. Remember the alleged cocaine-in-the-bathroom party?

Garcelle looks great and shades Rinna’s outfit in her production interview. Kyle and Mauricio Umansky always look stunning. Dorit and P.K. are dressed to the nines. Lisa and Garcelle step aside to talk. Lisa is feeling good about where they are. Garcelle wants to keep moving forward by having Lisa reach out to mend fences with Denise. Garcelle wants to see “more action and less talk.” 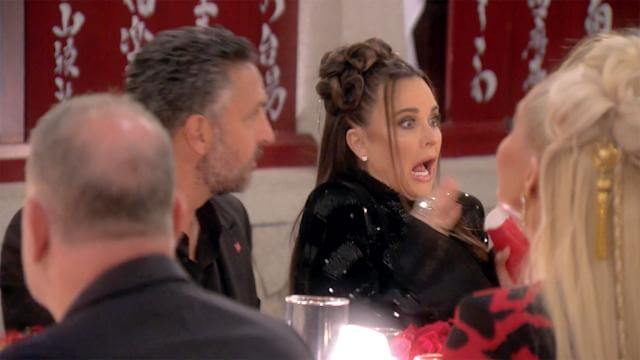 Erika arrives, all smiles (for the moment). Sutton and her boyfriend, Michael, are running late. Erika is seated next to P.K. Let’s hope that Erika doesn’t hear tonight about how the Umanskys and Kemsleys were talking about her. Rob gives a beautiful toast about true friends. He says, “The thing about friends is that a true friend is someone that doesn’t make your problems disappear. A true friend is someone that does not disappear when the problems come.” And Crystal says that she’s more open when sharing her culture and family.

Crystal has a special surprise for the party attendees. The ladies have red envelopes of money to feed to the animal when it comes. Immediately Kyle is concerned about “what animal is coming?” Part of the tradition is to feed the animal money, and the money will come back to you. Then Kyle screams when she hears the drummers and processional start. 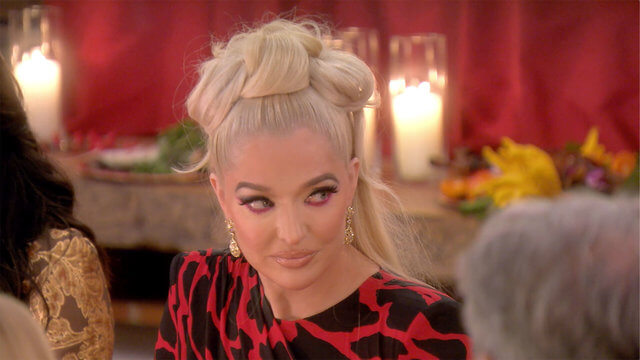 At Crystal’s party, she explains what you need to do to prepare for the new year such as, “cleaning your home, getting your hair cut, not to swear on New Year’s (as she points to Erika), and you don’t want to sweep or take the trash out on the day. Just leave it.” Then Kyle stirs the pot (again) and says that it’s a metaphor for Sutton sweeping things under the rug. So, Sutton, once again, tries to make peace with Erika. Erika first leaves a long awkward pause, and then says, “I have nothing to say.” Sutton tries again and tells Erika that everyone wants to see her come out “shining bright.” And Erika is cold.

Crystal tries to regain momentum of the party by inviting everyone to the bar for dessert. Kyle and Sutton regroup in the bathroom as P.K. talks to Erika. Kathy takes her shot talking to Erika. Kathy says that she and Erika are both sensitive, and Kathy encourages Erika to come with her to just listen. Kyle stirs it up and says to Erika that she and Sutton were talking about Erika again. Sutton says to Erika, “We need to talk.” And Erika says she needs a minute before that happens. 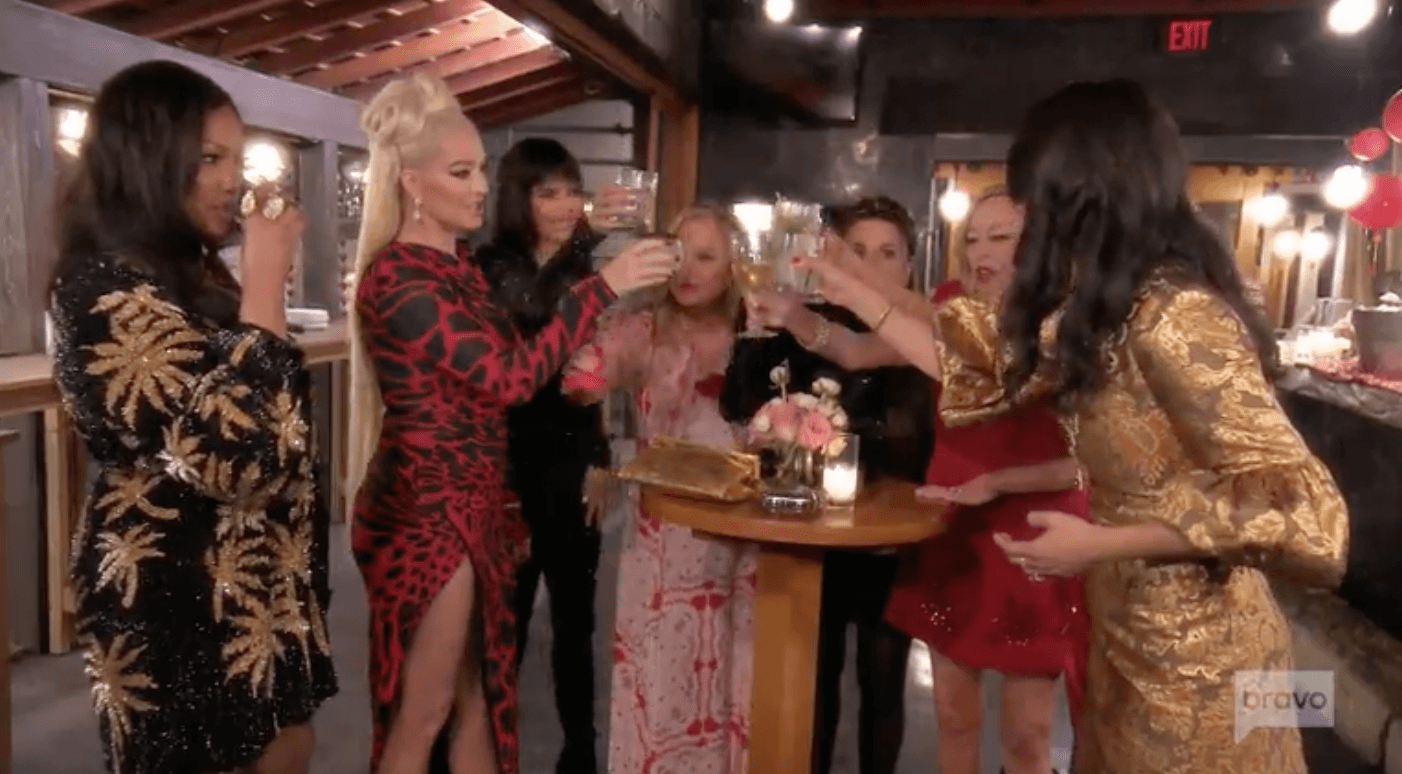 As we head into the four-part reunion, Sutton is still waiting for Erika to reach out for that talk. Sutton moved out of Kyle’s rental house, “six months after her six-week deadline.” Kyle and Kathy have taken this season to rebuild their sisterhood. Dorit is expanding her wedding dress line to include ready-to-wear gowns. Lisa is considering adding acrylic nails to her Rinna beauty portfolio. Garcelle is back at the studio to film and is taking a break from dating for a while. Crystal toasts to the New Year and a 2021 renewal. Erika is still facing a daily barrage of media attention and attorneys, and if the recent media reports about the reunion are any indication, her friend circle is about to get even smaller.