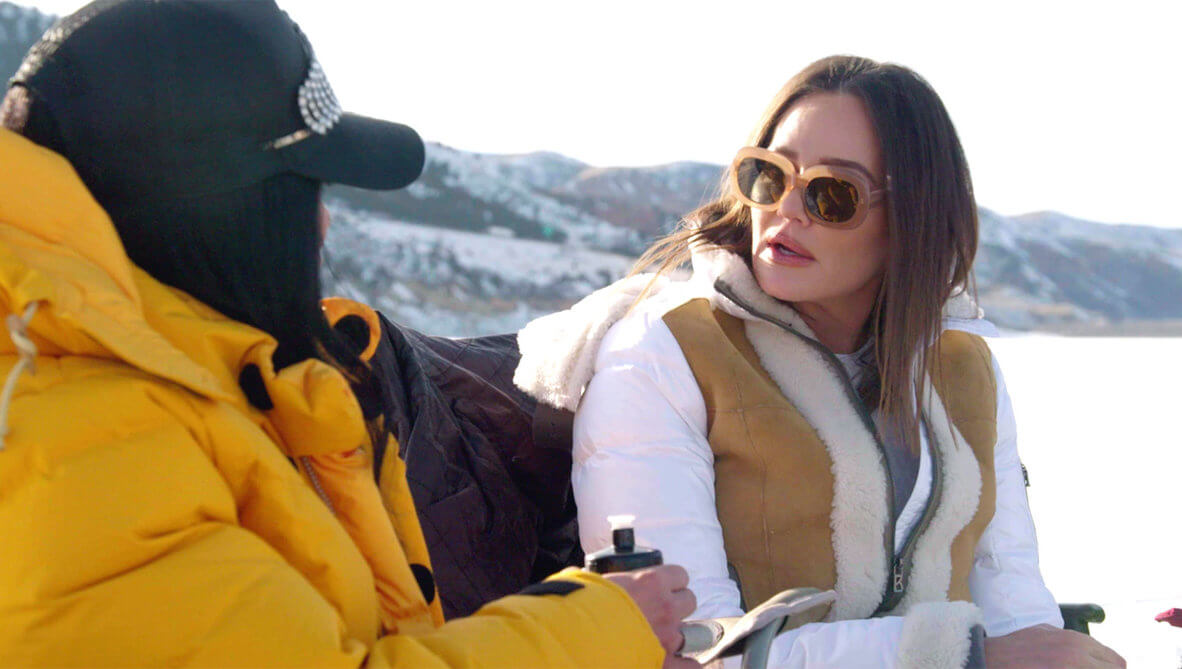 Last week on The Real Housewives of Salt Lake City, the ladies continued their grudge match out in the middle of a lake. As they tried ice fishing, Meredith Marks is talking about how hurt Brooks Marks is, and Jen Shah just cannot hear it. Jen makes it all about her. And Meredith has had enough and storms off.

Lisa Barlow tries to draw Meredith back for a resolution to the issue with Jen. And as Meredith says in her production interview, Lisa wants peace between them, so this is about Lisa. And then Lisa tells a story about someone telling her years ago that her son Jack Barlow had a big head and she’s still upset about it. Really? Lisa can’t see that someone saying a 3-year-old has a big head is not equivalent to Jen’s social media attacks and support of attacks on Brooks over his sexuality. 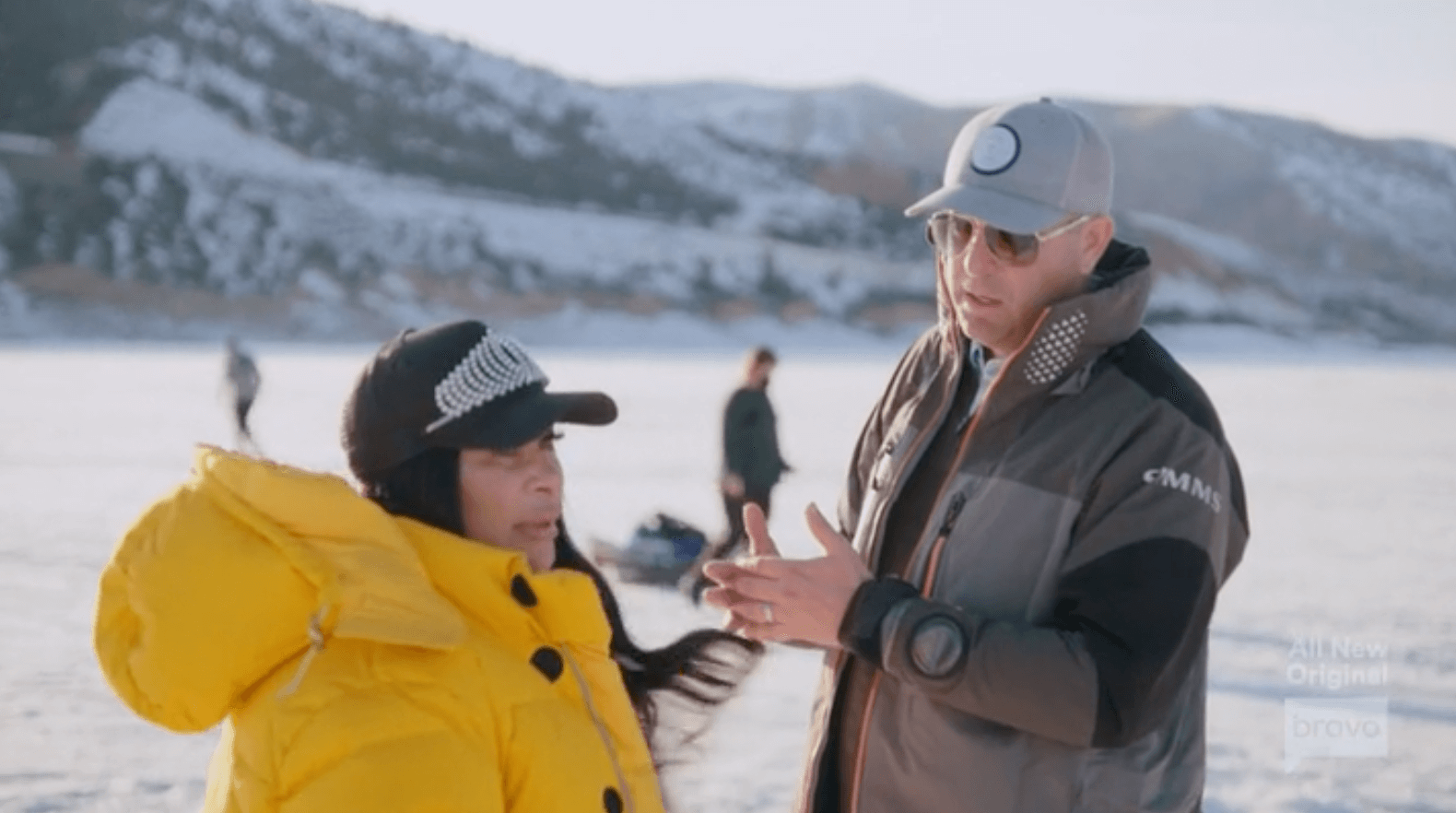 While Lisa talks to Meredith, Heather Gay, and Whitney Rose, try to reason with Jen. Teaching a 40+-year-old woman how to be empathetic isn’t going to happen. Jen has a complete meltdown and storms off. Then Lisa tries to talk to Jen. Heather decides not to go to the weak side of the ice because she lied about her body weight. This is why we love Heather! Where did those ice fishermen go? Jen is still thinking and acting like she’s the victim. Then she yells really loudly, “I need to defend my f-ing vagina and my kids.” Then we see one of the fishermen, likely heading away from the drama.

Jen gets so upset that her diamond bracelet falls off. Then Lisa picks it up and Jen throws it. Lisa is frustrated that Jen threw a $70,000 bracelet and says, “I have a high threshold for what I can put up with, but where I draw the line is when people start throwing diamonds.” Throwing her husband’s Rolex into a snowbank must not be the same. First Assistant Stuart shows up and Lisa hands him the bracelet.

Heather is leaving [upset that she’s going to miss more of the drama] to go to Ashley Gay’s high school senior class school event. Then Whitney inserts herself into the conversation with Lisa and Meredith, and that doesn’t go well. Stuart tries to talk Jen down by explaining how it is when he and Jen argue. Stuart wants Jen to “make peace” for her own self, but Jen’s not listening to him either. 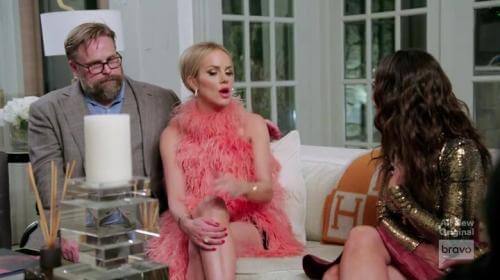 Jen rejoins the group, and Meredith doesn’t want to talk, but Jen apologizes for hurting Brooks. Jennie is excited, but as Meredith says, Jen apologizing and then going back to her old ways is nothing new. Then Lisa says, “I feel better.” And we know that’s why the entire world of ice fishing had to stop… for Lisa to feel better.

Mary Cosby is attempting to cook. Don’t we all know she has staff (relatives) for that? Jennie Nguyen is folding towels with her children. Jen calls First Assistant Stuart “a little bitch” because he won’t clean up dog poop. Lisa shows up at her friend, Sarajane Warner’s house, and greets their mutual friend, Angie Harrington. Angie and Lisa met more than 20 years ago and have bonded over their love of fashion and fast food.

A group called ‘Encircle’ is having a gambling-themed fundraiser for LBGTQ youth. Angie says that she and her husband have a transgender child. Whitney is going to be at the casino night. Angie wants to know from Lisa if there is going to be any drama. After Jen’s year of homophobia, perhaps Angie should be asking a different question. Lisa seems irritated that Whitney is close to Angie now, and in her production interview, Lisa calls the two of them, “inbred polygamy cousins.” Lisa tells Angie to invite whoever she wants to the fundraiser. 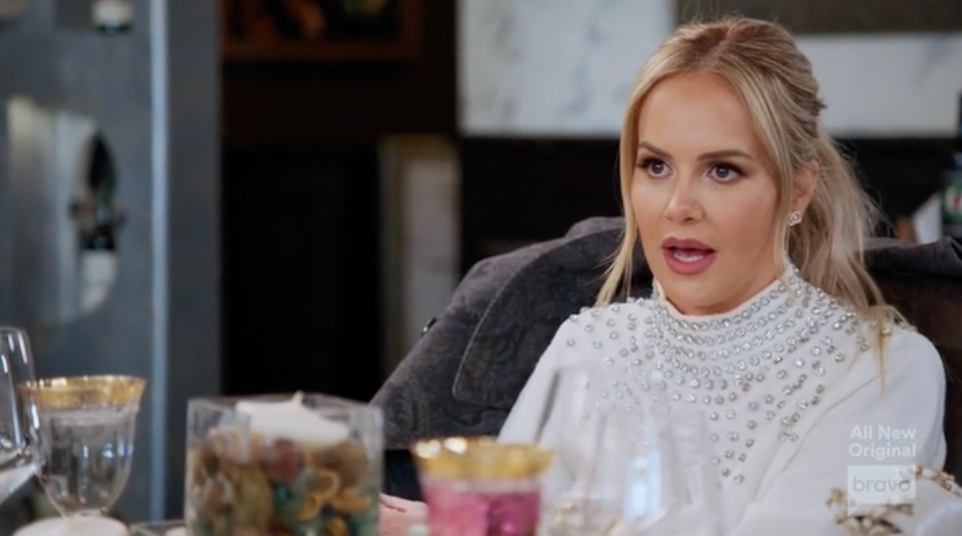 Now for another awkward conversation between Mary and her son, Robert Cosby Jr. He comes into the kitchen to take a bottle of water and a bottle of juice [back to his bedroom refrigerator]. Robert was literally saved by the doorbell as Meredith arrives. Meredith says that her face is red because she’s had a vampire facial. The process—draw blood, spin blood, then apply to the face with microneedles. Meredith and Mary will be together for the first time since the reunion from last season. Meredith says that at the ice-fishing trip, Jen took partial responsibility and did apologize.

Whitney meets with Angie for lunch. Both are related to Shadrach Roundy, a Mormon pioneer. They jump in right away to the awkwardness of Whitney, Heather, and Lisa all invited to the casino night party. Angie tells Whitney that Lisa asked her to not acknowledge Whitney as her cousin. Angie shares a text message that she got from the caterer, canceling their participation in the charity event. Angie says that Lisa’s assistant was involved.

As the 70s theme is on full blast, so are the diamonds. Everyone is greeted at the door with diamonds they can borrow for the evening. Mary and Whitney are trying to figure out how to escape talking to Jen by climbing over a banister. Then Whitney was ignored by Lisa as Lisa went straight to Jennie. John Barlow hugged Whitney, so if he got the marching orders, he wasn’t listening. Lisa is overheard saying, “There’s nothing worse than being at a party with no food.” Then Seth Marks has an awkward conversation with Heather about her personality and her breasts. 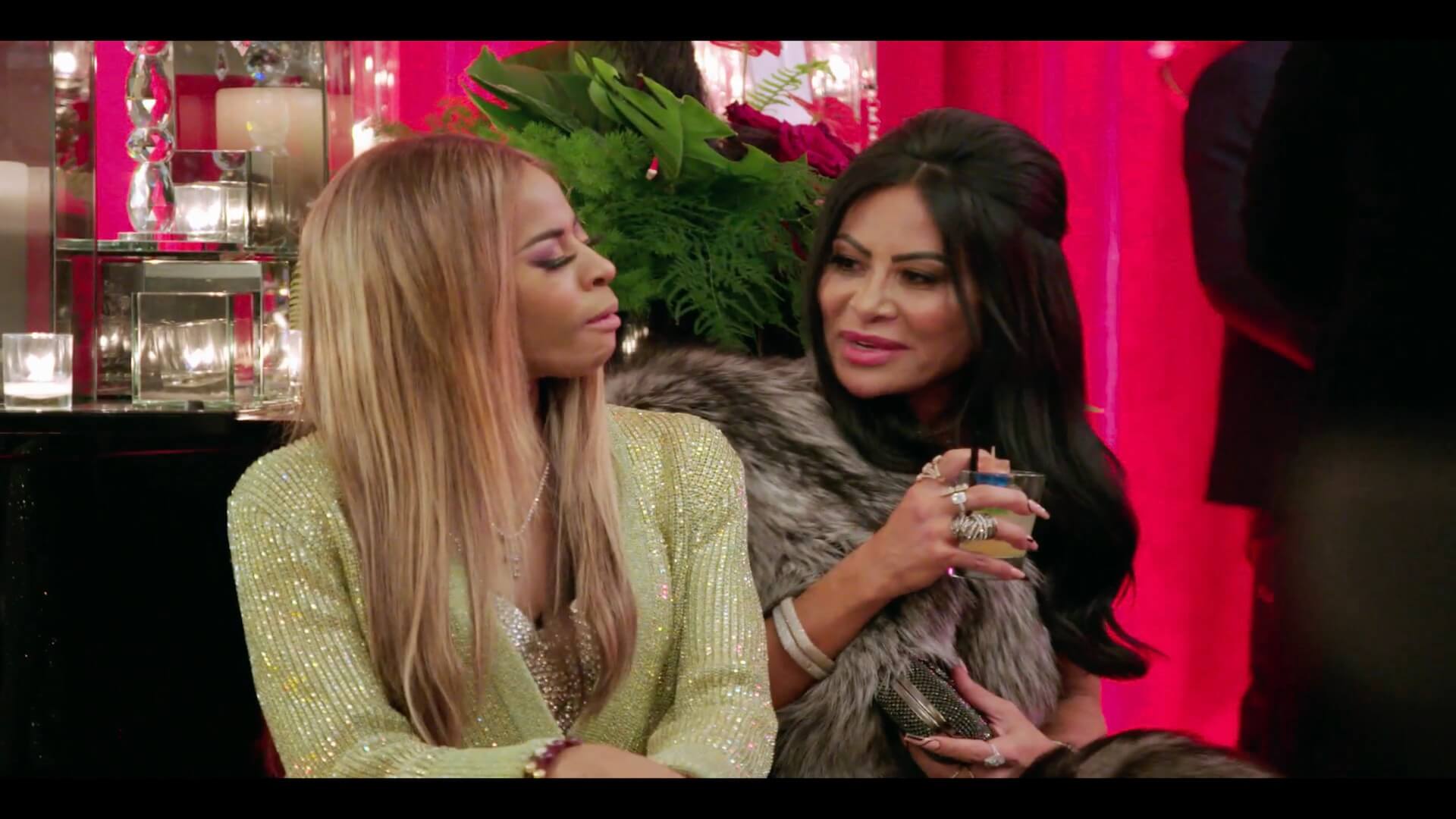 Angie’s husband, Chris Harrington, makes a passionate speech about the work that Encircle is doing. The first person to donate, Josh James, donates $1 million to the cause.

Jen sits down next to Mary and invites Robert and Mary over to her house. Jen says that Robert Cosby Sr. and Coach Sharrieff Shah Sr. can have a grill-off. Mary says that she thought they made up last time, but then Jen started trash-talking again. Jen and Mary declare a truce at the fund-raiser and pinky swear to get along. Mary says, “I’ve allowed myself to put the door open, but I also have a screen there,” as she describes her relationship with Jen. Mary goes on to say that screen is there, but it’s electrified because “the trust has been burnt.” 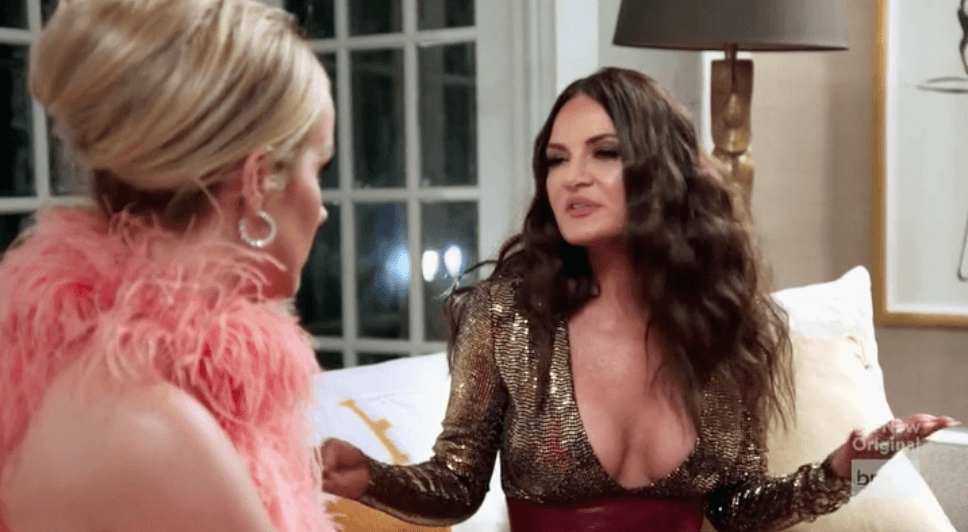 Angie pulls Lisa into the other room. Angie is upset that her caterer for the event quit because Lisa’s assistant called her and said that they had to pull out of the event. Lisa is saying it has nothing to do with her. Angie says someone called the caterers to threaten them. Lisa brings up that Angie and Whitney are close friends and cousins, so she goes down a different rabbit trail, trying to distract Angie from the point. In her production interview, Angie thinks that Lisa “meddled in her event” because Angie is friends with Whitney.

Angie brings up that Lisa can be friends with Meredith and friends with Jen, so Lisa goes right away to pull Meredith and Jen into the conversation. Lisa says to Meredith, “Our friendship’s in questioned and I plotted to ruin Angie’s party.” As they reconvene in another room, Lisa drags Meredith in to announce that their friendship is fine. Lisa is trying too hard to prove that her friendships or non-friendships don’t impact other friendships. As Angie tells the group what happened with the caterer, Jen is confused about what the fight is. Jen’s just glad it’s not her for a change. Then production plays the best-of-Jen-losing-it. 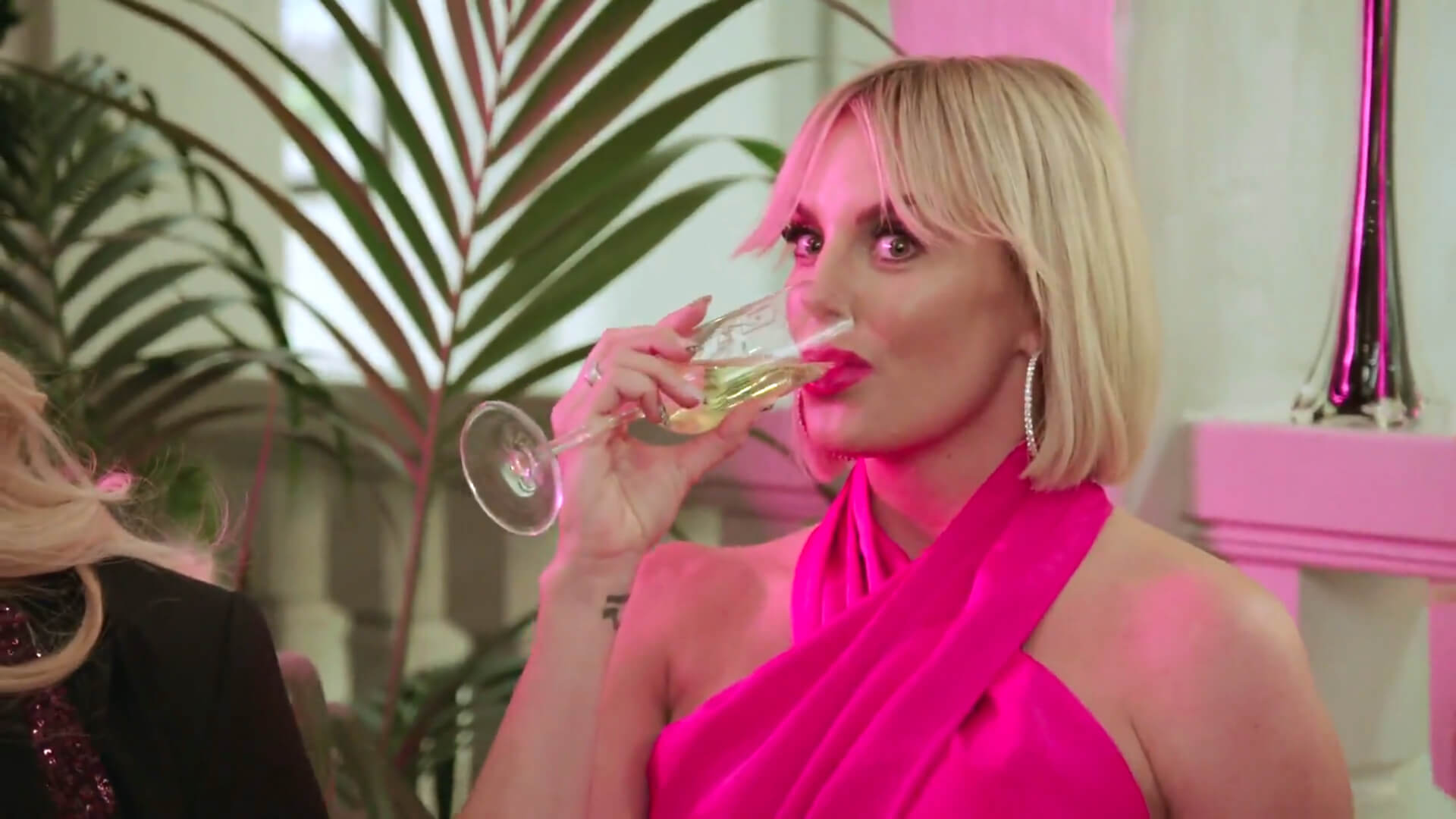 As Whitney comes into the room, Lisa asks, “Why are you in here?” The attention turns to why Lisa is upset with Whitney. And why is Lisa telling Angie not to follow Whitney on social media or acknowledge her? Whitney says, “I have a Ph.D. in Lisa’s behavior. When Lisa’s screaming, it’s because she is being challenged. When Lisa cries, it’s because she doesn’t want to deal with it. And when Lisa walks away, it’s because she’s guilty and has been caught red-handed.”

Next time, three exciting things to look forward to… guys night out, the Jen–Brooks great apology tour, and the Lisa–Whitney summit. Sound off in the comments. What did everyone think of casino night and new friend, Angie?