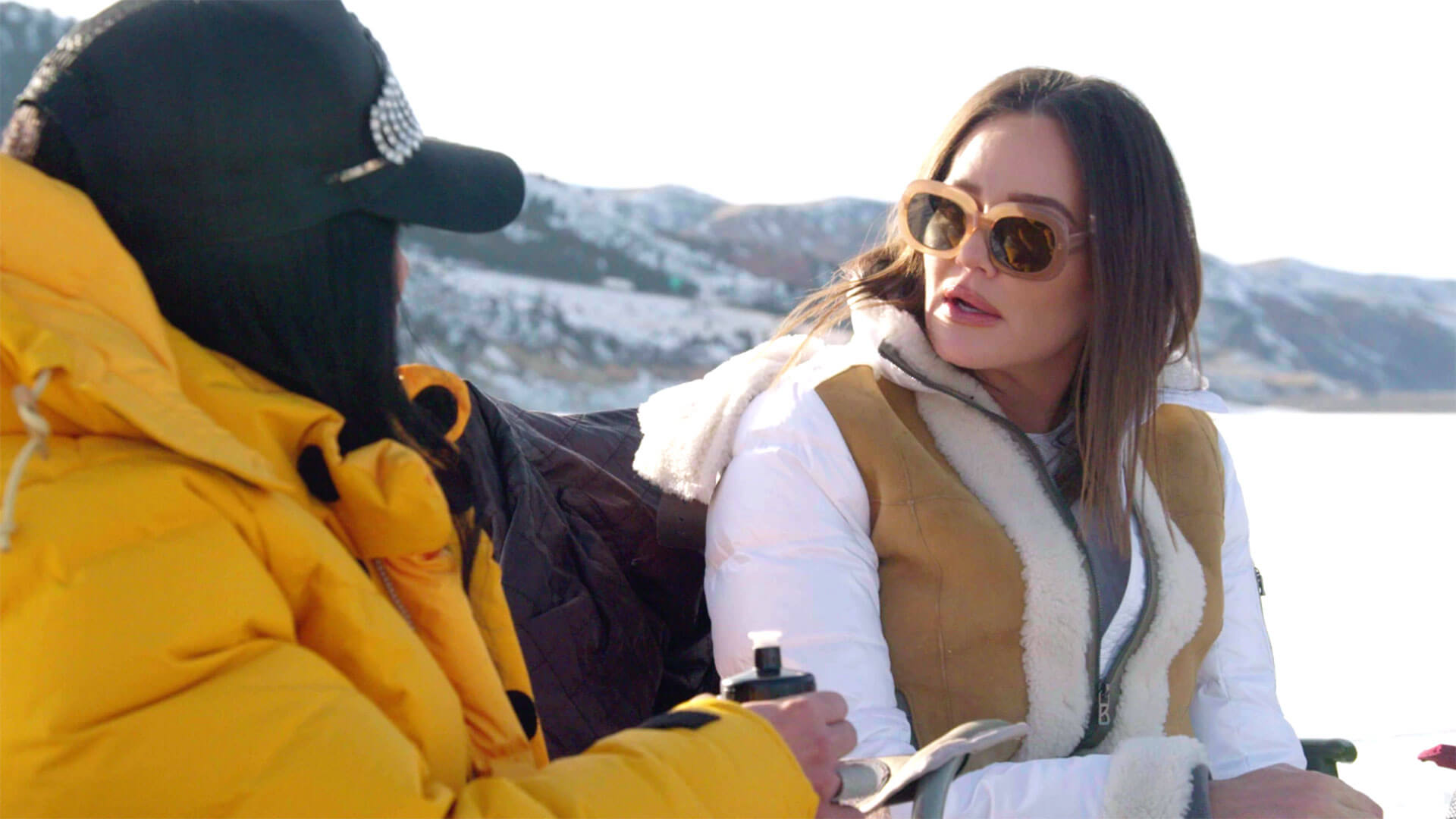 This week on The Real Housewives of Salt Lake City, the ladies go ice fishing. Is it possible to glam for that? Jen Shah hosts and Meredith Marks takes the opportunity to confront Jen about Jen’s mean tweeting toward her family.

Heather Gay is thinking about expanding her business to a new location. She says that Covid helped her beauty business since women are sitting at home and looking at themselves and staring at their flaws all day long. Heather Facetimes Whitney Rose to tell her about meeting to talk to Jen at the Ice Castles. Heather thinks her friendship with Jen will be better again. 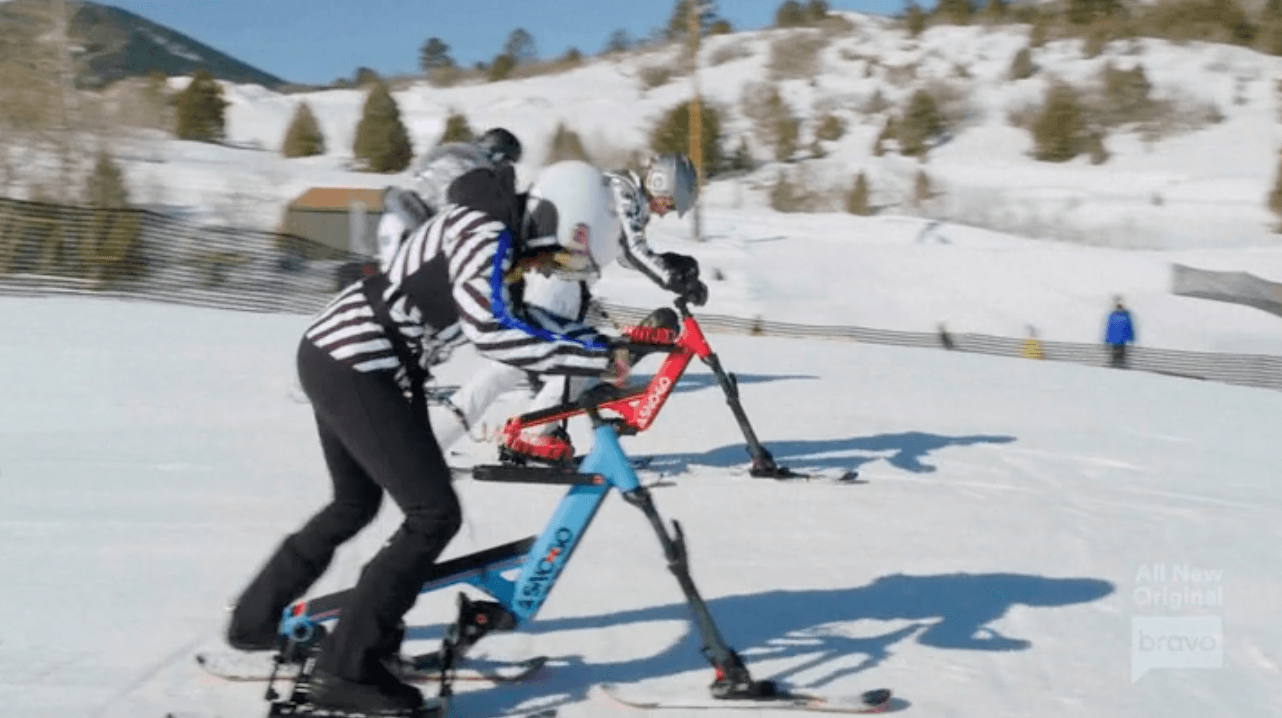 Jen and Lisa Barlow meet to try a snow-go bike ride. Jen tried to snow-go bike a year prior to try to look better than Lisa at something. Jen tells Lisa that Coach Sharrieff Shah Sr. is going to start traveling and recruiting again. Jen is ready for him to get back on the road. Coach Shah has been tinkering at home, going to the hardware store to do some small projects around their house.

Jen tells Lisa that she wants to plan an adventurous outing for the girls. Jen says, “I need to know some statistics from you — weight, height, eye color, hair color, and your full name on your ID. And I’m not stealing your identity.” YIKES! Lisa is wondering why the ice fishing company needs that information. Lisa says, “So why do you need all my stats? Am I going to end up under ice?” Lisa is glad that Jen invited Meredith. 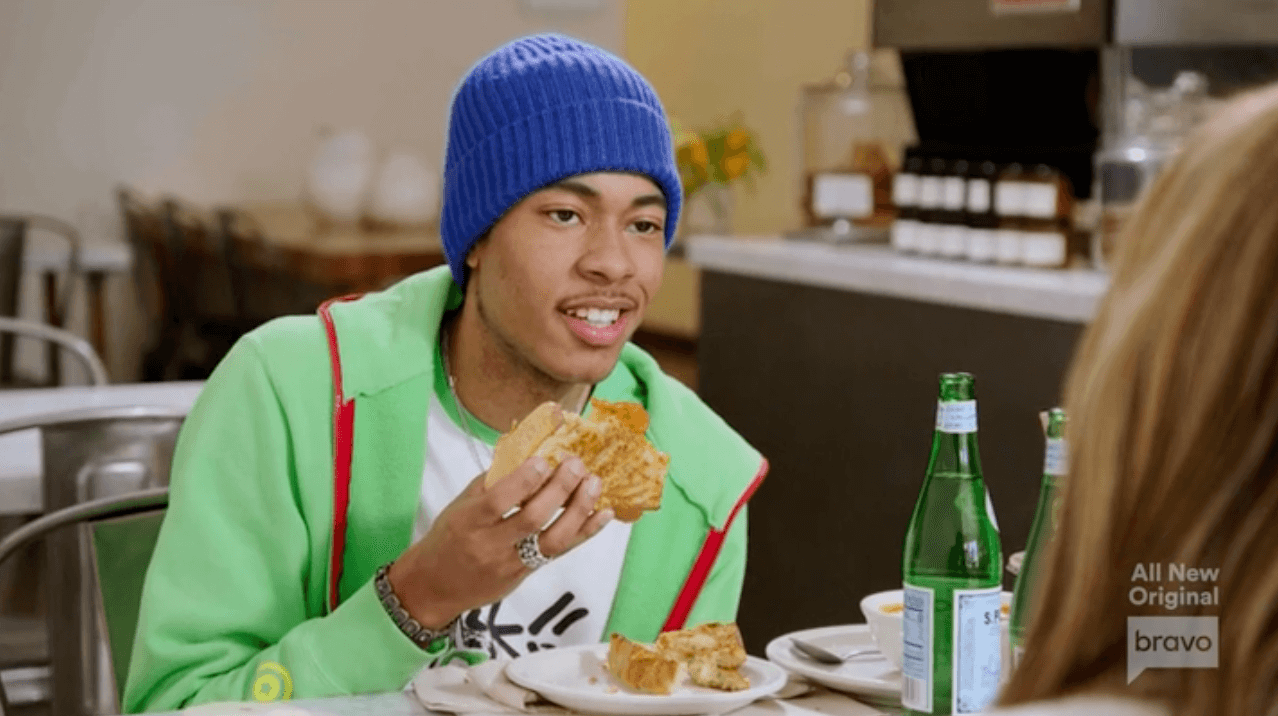 Lisa doesn’t understand Jen’s relationship with Heather because Heather is “completely manipulative.” Lisa says that Whitney seems to be looking for a problem every time the two of them are near each other. Jen is encouraging Lisa to take the higher road. This advice coming from Jen is laughable.

Mary Cosby and her son go to a local coffee shop. She says that she and her son have an amazing bond and they can talk about anything. She’s upset that he didn’t stop to bless his food before eating. In her production interview, she says that even though he drives her crazy, they can talk about anything. She tells him to “Wear a jimmy. Make sure you cover it. You don’t want that thing coming home purple.” And she goes on to say, “Just because they look pretty, don’t mean they’re pretty inside.” 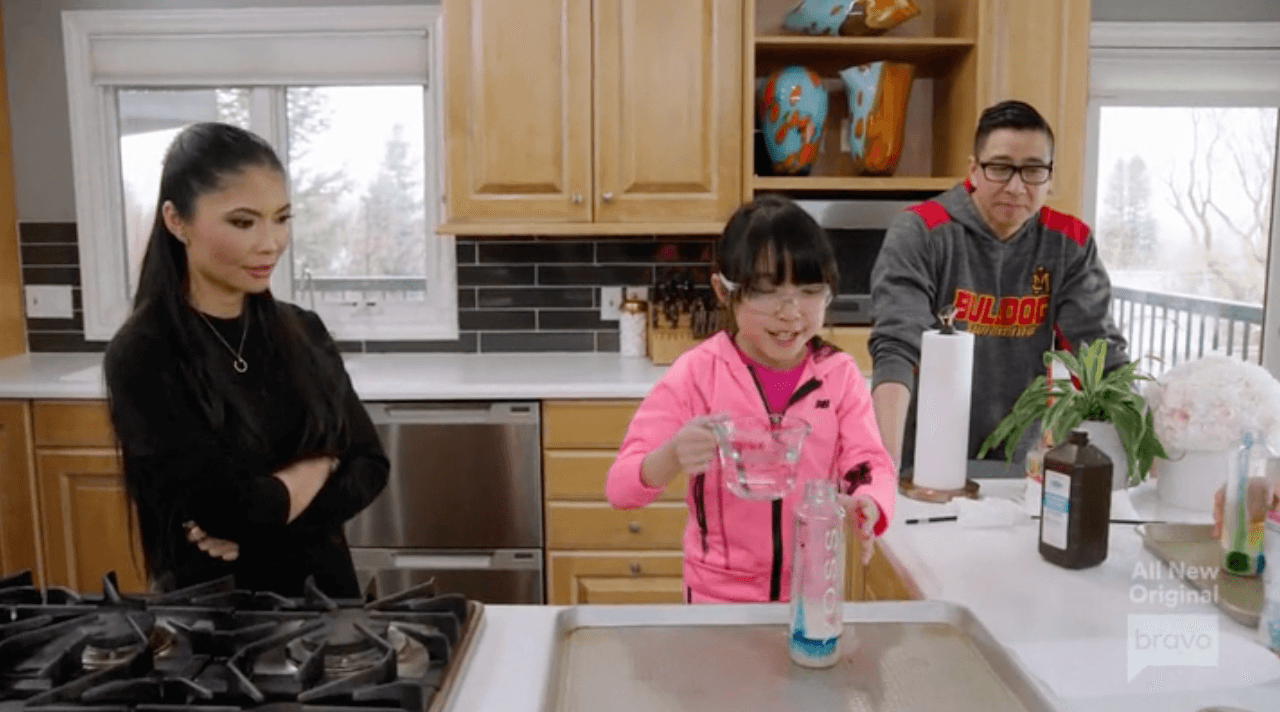 Mary and Robert Cosby Jr. discuss how he wants to move out. Mary asks how he’s going to pay his bills, and he says, “I’m not sure.” Mary encourages him to investigate the Army. The Army was good for Robert Cosby Sr.

Nguyen’s daughter, Karlin Nguyen, is leading a family science experiment. Jennie and Duy Nguyen watch while Atlas Nguyen and Triton Nguyen follow along with their sister. As the kids clean the kitchen (take notes Mary on how not to raise a helpless child), Duy and Jennie go talk in another room. Duy takes the opportunity again to bring up having more children. Jennie says she has had nine miscarriages and three C-sections, so she had her tubes tied because it’s dangerous for her to have more children. She thinks Duy knows the dangers to her and is being heartless about it. 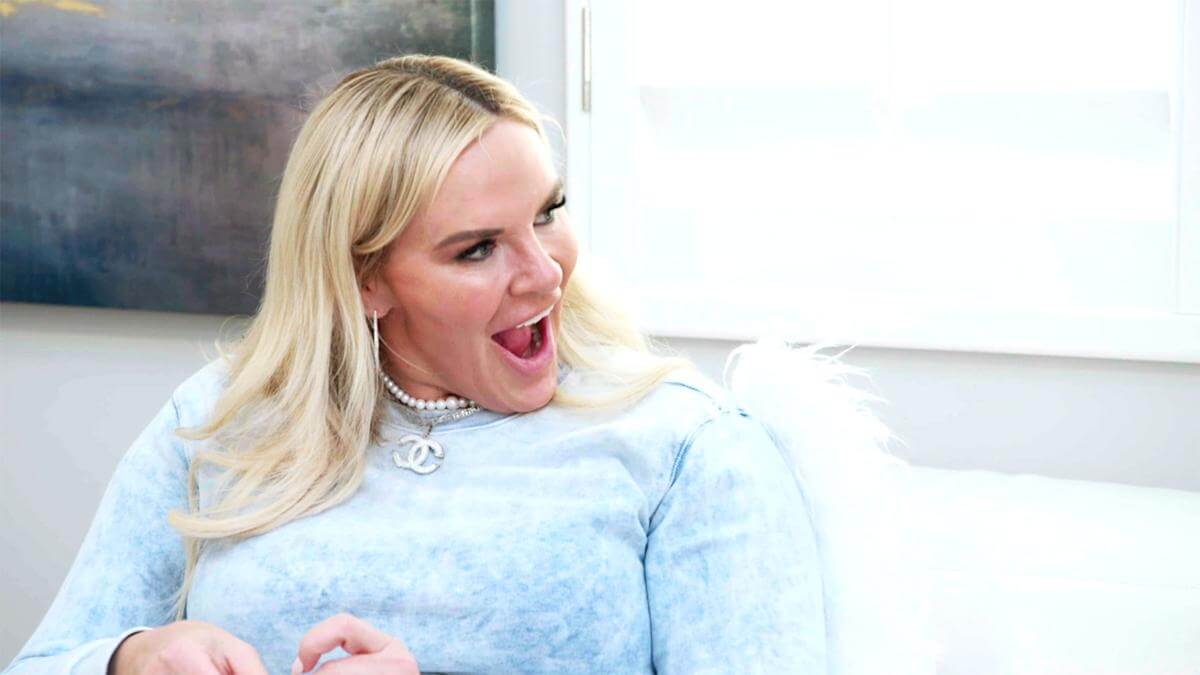 Heather and her girls are bonding over the drill team senior showcase for Ashley Gay and ballet for Georgia Gay. Heather is pleased that the children, including Annabelle Gay, have conviction about their religious beliefs. She feels like she never had the option to have conviction about her beliefs. Heather is encouraging Annabelle, that if Annabelle wants to go back to the Mormon church, Heather will go with her.

Brooks Marks, Meredith, and Meredith’s assistant, Matthew, have clothes and jewelry out from the new collection she is carrying at her store. Meredith’s friends, Kathy, Nat, Jeff, and Mary, stop by for a preview. Mary may lose her “friend” status when Meredith hears what Mary says in her production interview about Meredith’s style. Mary fumbles around and finally says, “Meredith’s style is Meredith, Meredith Marks, and that can be a style.” 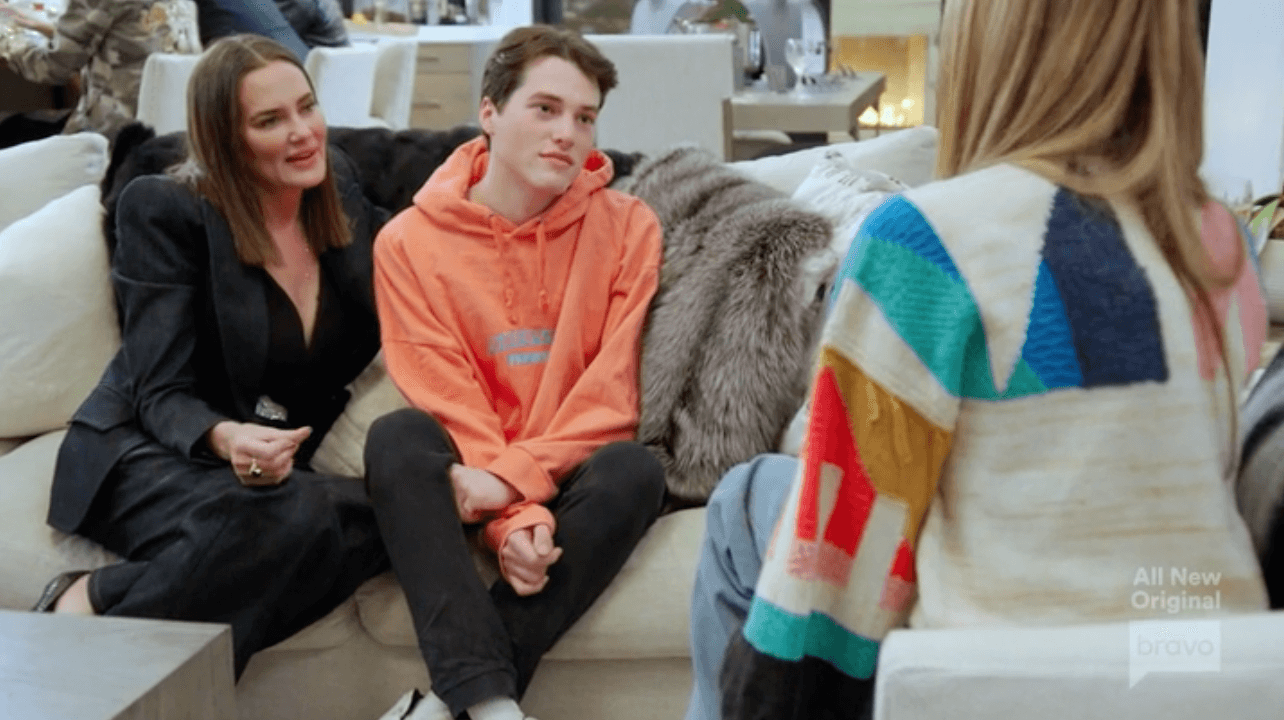 Mary sits down with Brooks to talk about how he’s feeling since being targeted by Jen. Mary has been helping Brooks and listening to how he feels for more than a year. Mary asks Meredith why she doesn’t call Jen out for it. Mary says that the invite to ice fishing just might be the “in” to talk about what’s happening and how Jen is hurting Meredith’s family. Then in the middle of giving advice, Mary tells Brooks to be silent because she has to “poot.” Mary needs peace and quiet to fart. Then Mary says, “And that’s what talking about her makes me do.” It’s great to see Brooks and Meredith laugh!

Jen and her first assistant, Stuart, show up first for ice fishing. As Heather and Whitney drive to the event, Whitney’s concerned about showing up to a lake after Jen threatened to drown her in the lake behind her house. Whitney brought a life jacket! Heather says that she’s upset with Lisa for being mean to her face, and Jen for talking behind her back. Whitney says that both have been mean to her face and behind her back. Whitney thinks Lisa just might be attracted to her. Lisa and Jennie are riding together. Jennie thinks that Lisa, Meredith, and Jen need to find a solution to their conflict that allows them all to hang out together. Oh, Jennie. You are going to learn some things today fishing on the ice! 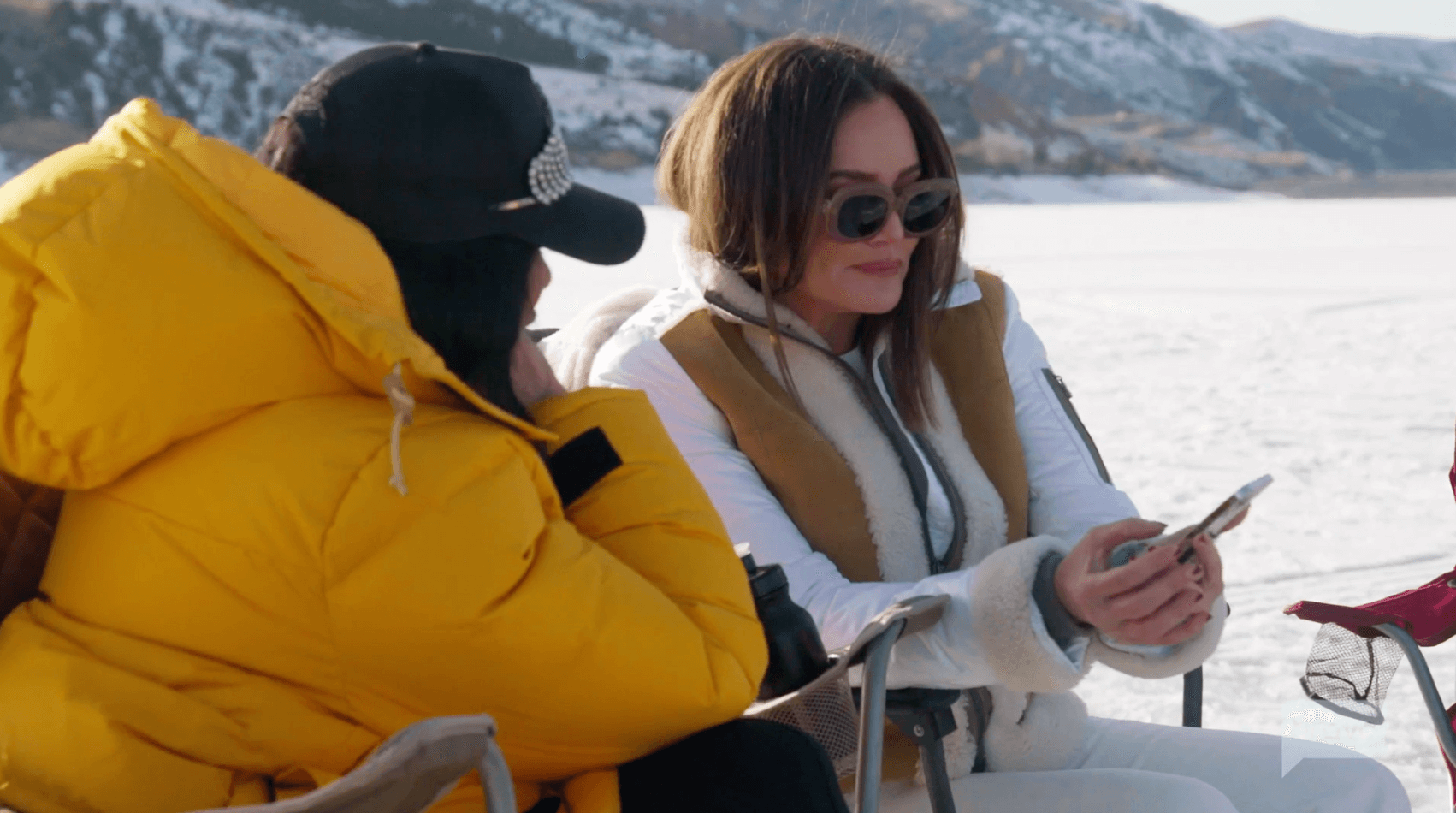 Lisa gives Whitney a hug and Whitney’s not prepared for that. Whitney is prepared for a snub, not a hug. Lisa says that she doesn’t fish and she doesn’t cook, but she loves the fish tacos at Del Taco. Meredith arrives. Then the leaders of the fishing expedition yell, “trout,” and the women run to see who can get the trout out of the fishing hole first.

Meredith tells Lisa, rather than avoiding Jen, she wants to address it. Meredith starts by telling Jen, “Your actions towards me are not aligned with your words.” Meredith wants Jen to stop speaking poorly of her family. Meredith says, “There are homophobic tweets regarding my son’s sexuality that you have liked. It is really painful. I was told about the Zoom that you hosted where you were questioning him coming out and his sexuality, and I heard you with my own ears publicly talk about that Brooks has never seen a vagina.” She goes on to say, “Those are negative, homophobic, microaggressions for a young adult who has not determined where he stands, and it’s horribly painful for someone to be pressured to talk about something they aren’t ready to talk about.” Meredith wants Jen to say that she’s against this kind of homophobic hate.

Jen’s first response is (surprise, gaslight), “What are you talking about?” Then Jen denies it, so Meredith pulls out the Twitter feed. Jen says that other people run her social media accounts. Meredith gets up to leave saying, “The denial is what I won’t accept.” Lisa tries to calm Meredith down, but Meredith says, “I can’t listen to the projecting, deflecting, and lying anymore. And I’ve had enough. I’m done.” Jen is unphased. 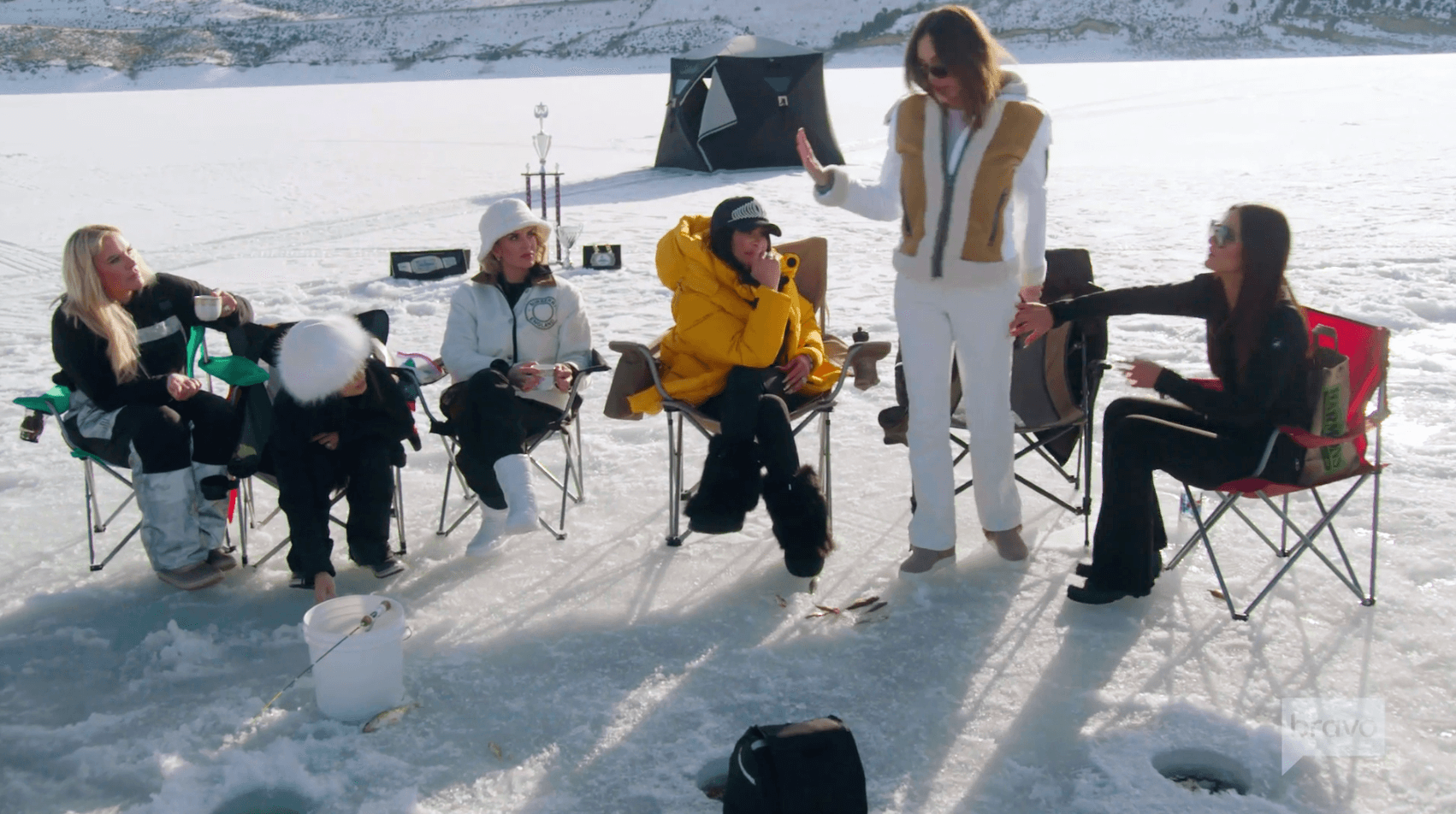 Lisa calls Jen over to talk to Meredith. Jen says, “I have not done anything but support Brooks, so I don’t know what the f**k that is!” Jennie tries to mediate asking Meredith to listen to Jen. Lisa goes to get Jen to bring her to Meredith. Jennie starts yelling at both Jen and Meredith telling them to listen to each other. Meredith is talking about how hurt Brooks is, and Jen just cannot hear it. Then Jen says, “How do you think my kids feel?” Meredith did nothing to Jen’s children. Jen makes it all about her. No surprise there.

Sound off in the comments! What do you think about the showdown, part 1?