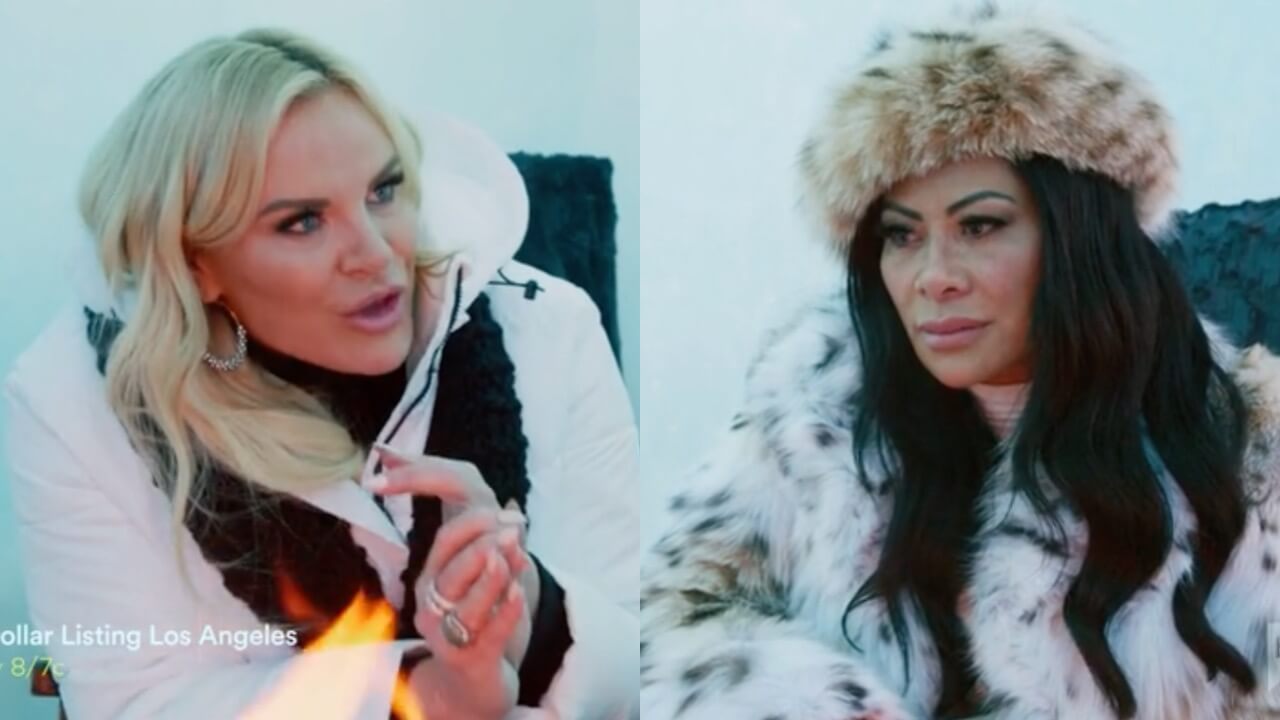 Tonight on The Real Housewives of Salt Lake City, does Heather Gay get her long-awaited apology from Jen Shah for all of the terrible things Jen said last season and between seasons? Will Jen apologize to Meredith Marks’s family? Let’s go with nope and nope.

Mary Cosby swings by to talk to Robert Cosby Jr., and his red refrigerator is everything! He has water, yogurt, and milk in the refrigerator in his bedroom. That’s much better than what could have been in there! 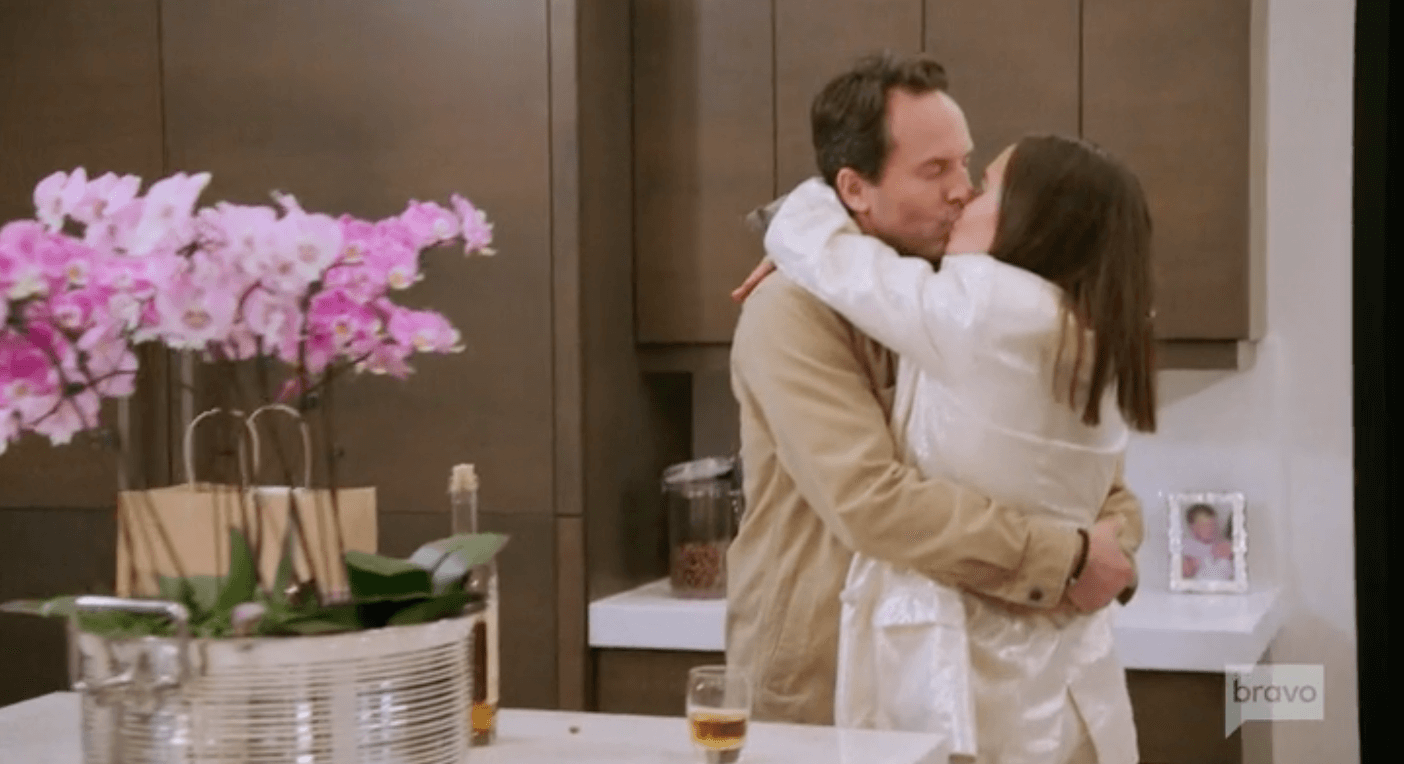 Jen and first assistant (alleged co-conspirator), Stuart; Dwayne, Jen’s nephew; and Murilo, Jen’s second assistant, are in her massive closet. Dwayne thinks that she should give things away to Goodwill. Jen’s family is preparing for Ramadan, a time of prayer and reflection. Dwayne has been living with Jen and Coach Sharrieff Shah Sr. since they moved him and his family out of South Central, Los Angeles. Jen seems to recognize that she’s fallen short as a mother, wife, auntie, and friend. Jen calls Heather to set up a time to talk after a couple of months of silence after the horrible things said at the reunion.

Meredith is talking to Brooks Marks on the phone when Seth Marks walks in wearing Meredith’s jeweled mask from Heather’s grand reopening last season of Beauty Lab. Seth’s job has now relocated from Ohio to Mississippi, but he is spending more time in Utah than he was in the past. They discuss how Jen is still going after Brooks on social media. Jen is liking mean tweets. Jen is labeling Brooks as gay and making homophobic comments about him when Brooks himself has not talked about his own sexuality, not even to his parents. Meredith feels like she is being pushed to a point where she will unleash on Jen. 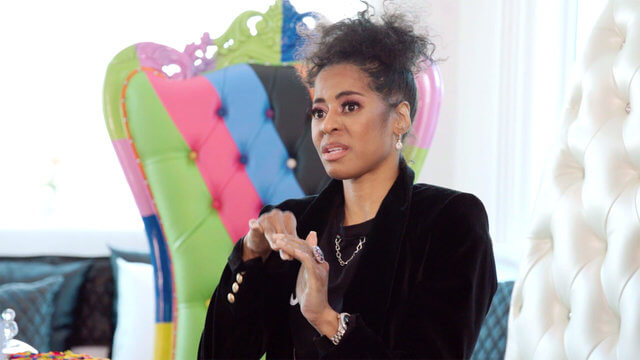 Mary is planning to redecorate after spending the pandemic looking at her 18-year-old decor. Big Joe, her cousin, comes by to discuss how she wants to redecorate her house. Mary says that “when Big Joe does do things, he’s really good,” and she goes on to say, “but he takes forever.” She wants to remove the crown molding from the fireplace and replace it with marble. The green room… Yikes. And the green bathroom. And the green carpet on the stairs.

Mary tells Cousin Joe that she’s having difficulty with her 18-year-old son. Then out of nowhere, she starts talking about what she told her son, “If you smell fish, run.” Cousin Joe can’t keep it together.

Lisa Barlow and Jennie Nguyen are going to see Jen at Shah Chalet 2.0. When they pull into the driveway, Jen and Stuart are working on a CBD deal. Lisa comes into Jen’s house with “matching sewing machines” so that they can all make matching pants and wear them to lunch. Jen says, “We don’t even cook, girl, how are we going to make some pants, really?” 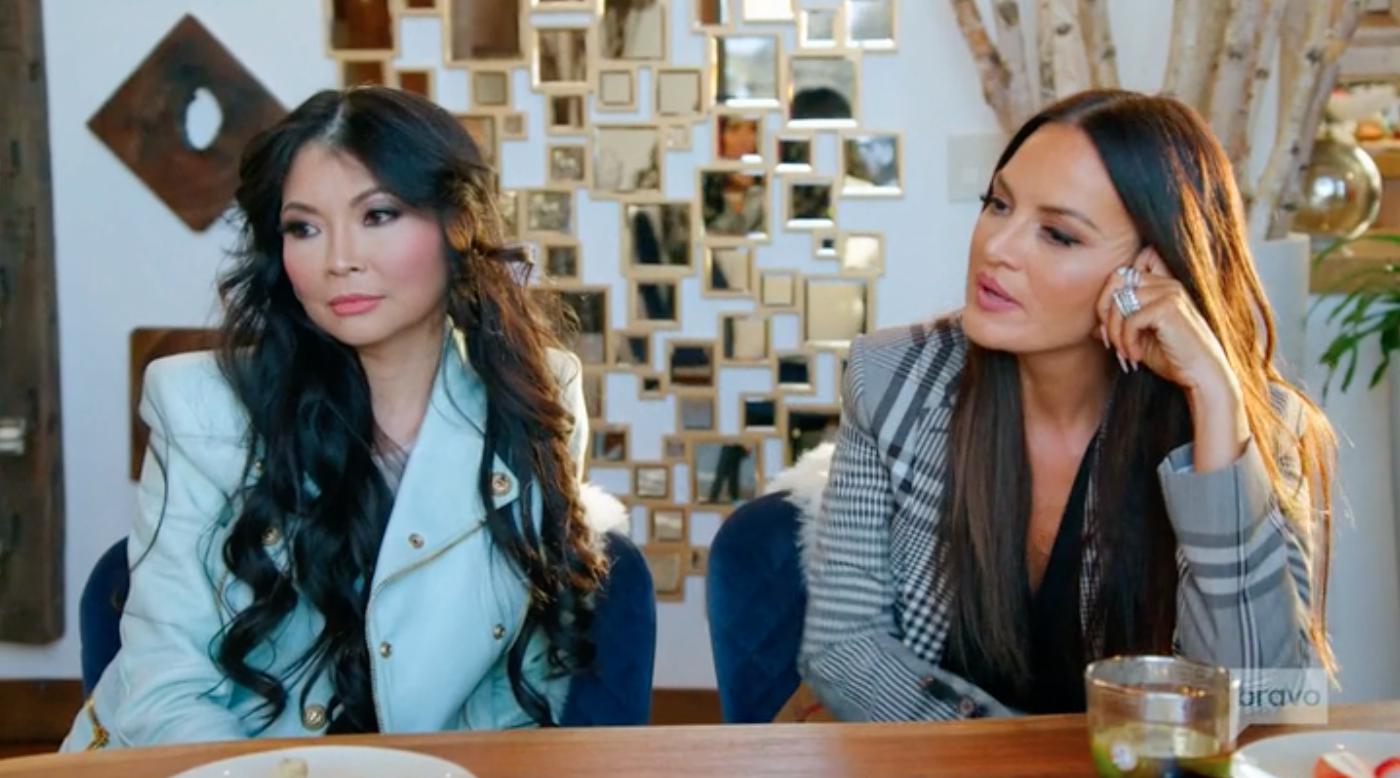 Lisa tells Jen that she had Shabbat dinner with Meredith. Jen thinks she’s apologized multiple times. Before Lisa can even say that it’s about what Jen says about Brooks, Jen is defensive and says, “I get that. I get that.” But immediately makes it about what Brooks said about her vagina last year. Jen justifies that it’s fine to like posts and tweets as long as she doesn’t make the posts herself. Jen thinks it’s about the apology, and it’s not. It’s about her unchanged behavior toward a friend’s son.

Heather and Whitney Rose meet up at an upscale resale shop. They try on clothing and Heather tells Whitney to put down the $21,000 Chanel bag. Heather tells Whitney that Jen Facetimed her to get together. Heather is trying to convince Whitney that Jen wants to have a real and authentic conversation over their issues. Whitney is worried that Heather will become friends again with Jen. Heather says, “I feel like we are true friends, and she just gets confused and lost in the wilderness. I really feel that way. And I know that that’s crazy. But when I talk to her, that’s how I feel.” Whitney wants Heather to make Jen work for their friendship. And Whitney wants Jen to be careful. 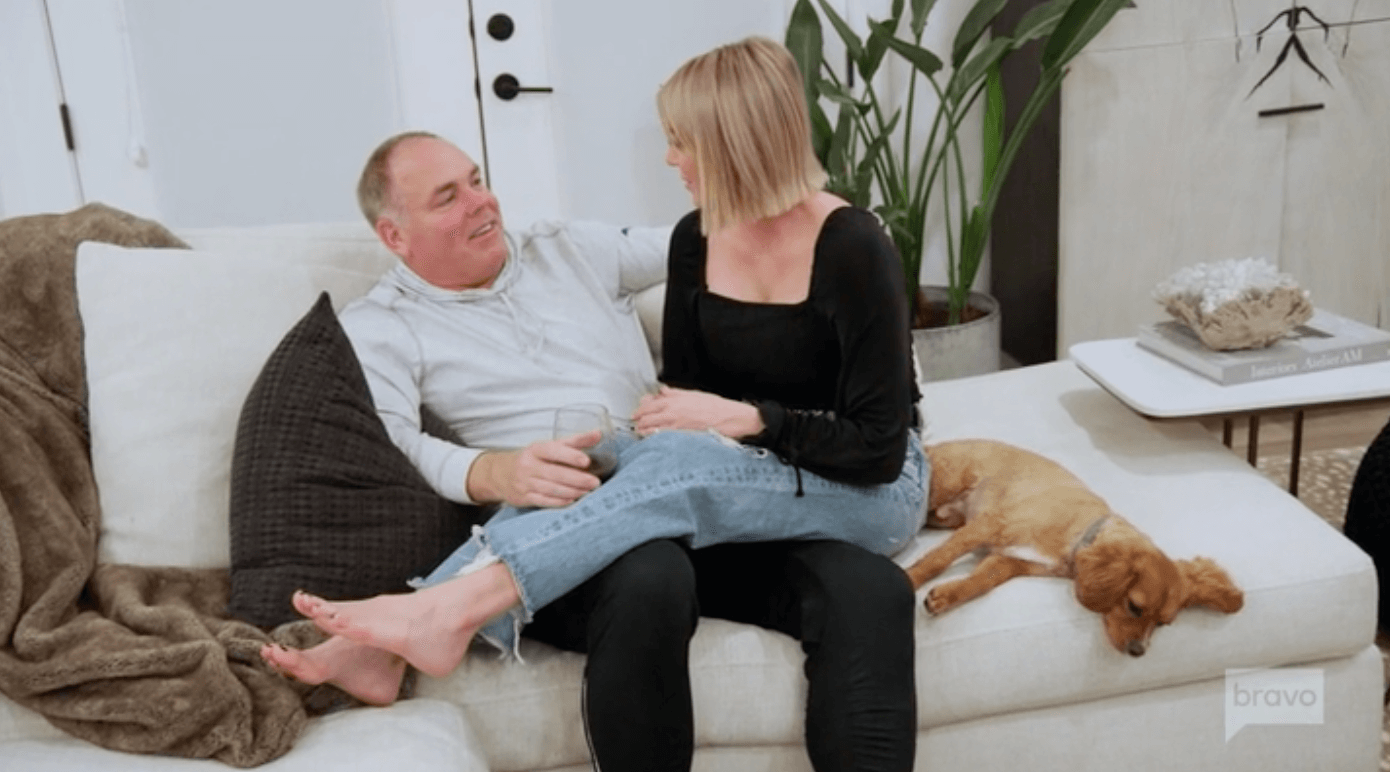 Jennie is cooking with her children Atlas Nguyen and Triton Nguyen. Karlin Nguyen is a scene-stealer. Jennie talks about how she owned multiple locations of medical clinics but gave it up to be home with her children. But Jennie says that she feels like her husband’s housekeeper. Then, as they sit to eat dinner, Jennie’s husband, Duy Nguyen, asks Karlin if she wants a little brother or sister. Karlin says, “no.” Jennie says that having a large family is a sign of wealth in the Vietnamese culture, so he wants more children.

Whitney is having family dinner with her husband, Justin Rose, and her preteens, Bobbi Rose and Brooks Rose. Whitney is telling her children that she wants to expand her business and “can’t do every single thing.” So they decide to have a chore chart. Whitney has big goals for her business. But Justin has some concerns that they don’t overlook their children and family. Whitney is asking Justin to help her more at home. She doesn’t want to resent him. The topic of sex comes up, and Whitney wants her sex life to not change. It’s changed from sex every day to two or three times per week. Whitney doesn’t want robotic sex that seems like a chore. In her production interview, she demonstrates what she means. Justin says that this problem has an easy answer. 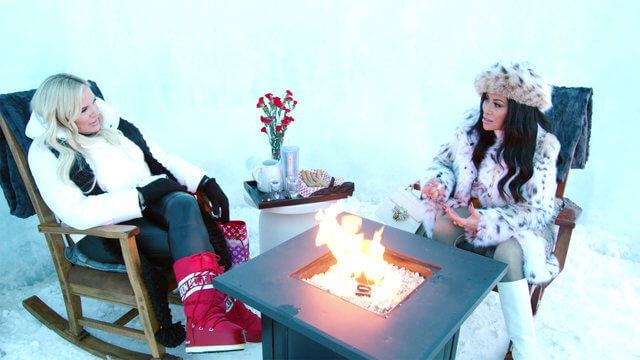 Jen and Heather meet in Midway, Utah, at a place called the Ice Castles. Jen arrives with Stuart. Jen thinks this is the perfect place to talk to Heather after icing her out for two months. Jen is riding on a sled. They have a little igloo-like place set up with a fire and some chairs. Heather wants to be at peace, but she hasn’t had that consistently. Heather goes right in on the things Jen has been saying about her, and how hurtful it is. Jen says, “like what?” The complete lack of self-awareness is astounding.

As Heather reaches for her phone saying, “Comparing me to sea mammals, Honey Boo Boo, manipulator, liar, racist.” Heather is hurt that Jen says, “You’re my girl” and then says such ugly things. Then defensive Jen shows up (again) to say that she’s hurt. Jen wants Heather to come to her every time so that Jen can understand why Heather is hurt, but Heather just wants Jen to stop saying and posting mean things. Heather pulls out the receipts… screenshots of blue check tweets. Jen is now denying saying those things and now Jen flips it back to Heather telling Heather that she believes the worst. What is it called when someone does terrible things and then turns it to somehow be the victim’s fault?

Then Jen fake cries. Jen thinks Heather is holding her to a “different standard.” No Jen, that standard is basic human decency in friendship. It’s not a different standard or a higher standard, it’s a basic standard. Then Jen says that she’s treated that way because she’s “brown.” Jen feels like she doesn’t belong. 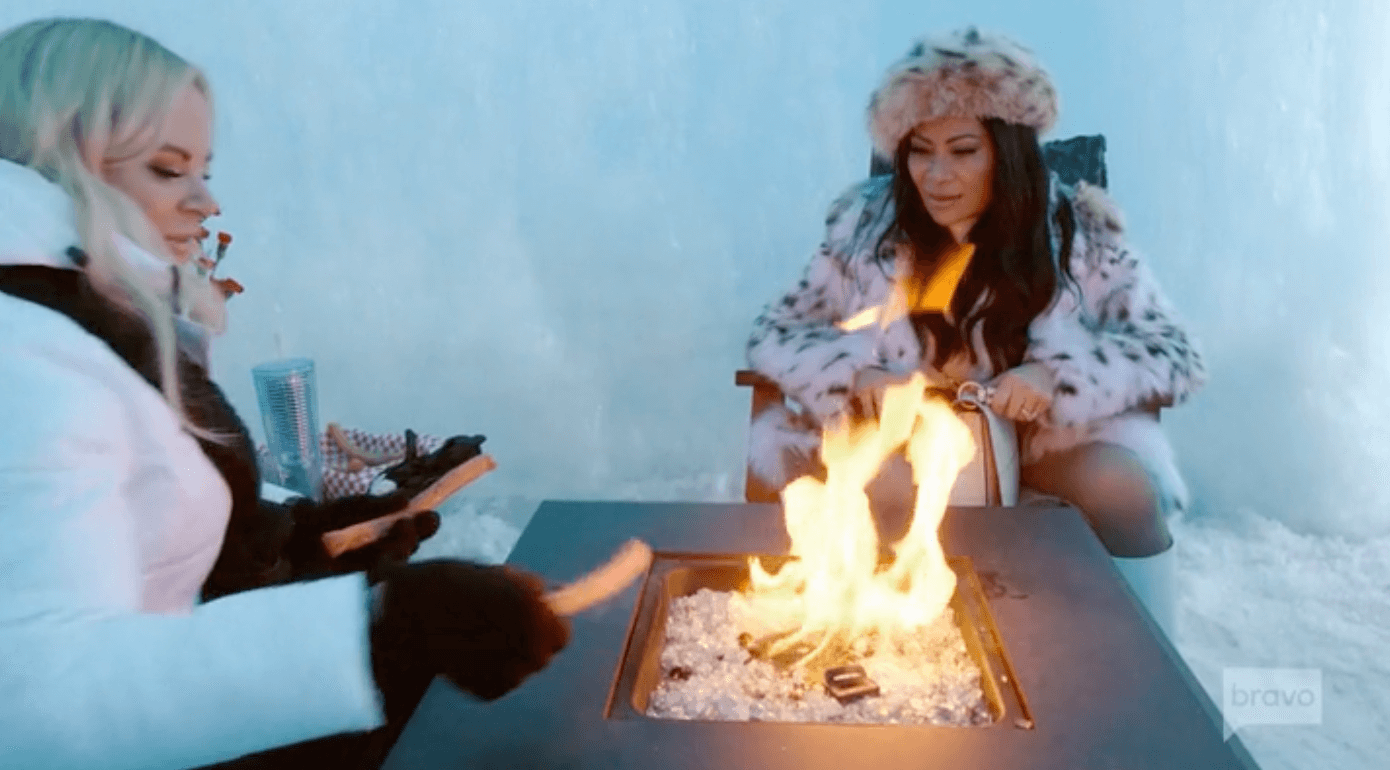 Does anyone else want Heather to say… Well, it’s not her skin color, it’s her hateful and mean attacks and drunken rants and fits that make her not belong. And then Heather says in her production interview, “I think Jen is treated differently because of her temper, not because of the color of her skin. And, in fact, she’s treated better because of her temper. We all walk on eggshells because of her temper.” Heather very clearly understands that Jen blows up, hurts people, and doesn’t connect that she needs to clean up the mess.

Even after everything, Heather wants to be a friend to Jen if Jen can stop attacking. Jen says she wants to be a better person. They leave this icy place on a little bit better terms.

Next time, Duy keeps pressing Jennie to have more children. Heather and her daughters talk about college and faith and the Mormon church. Jen plans an outing of ice fishing where she and Meredith start their showdown.