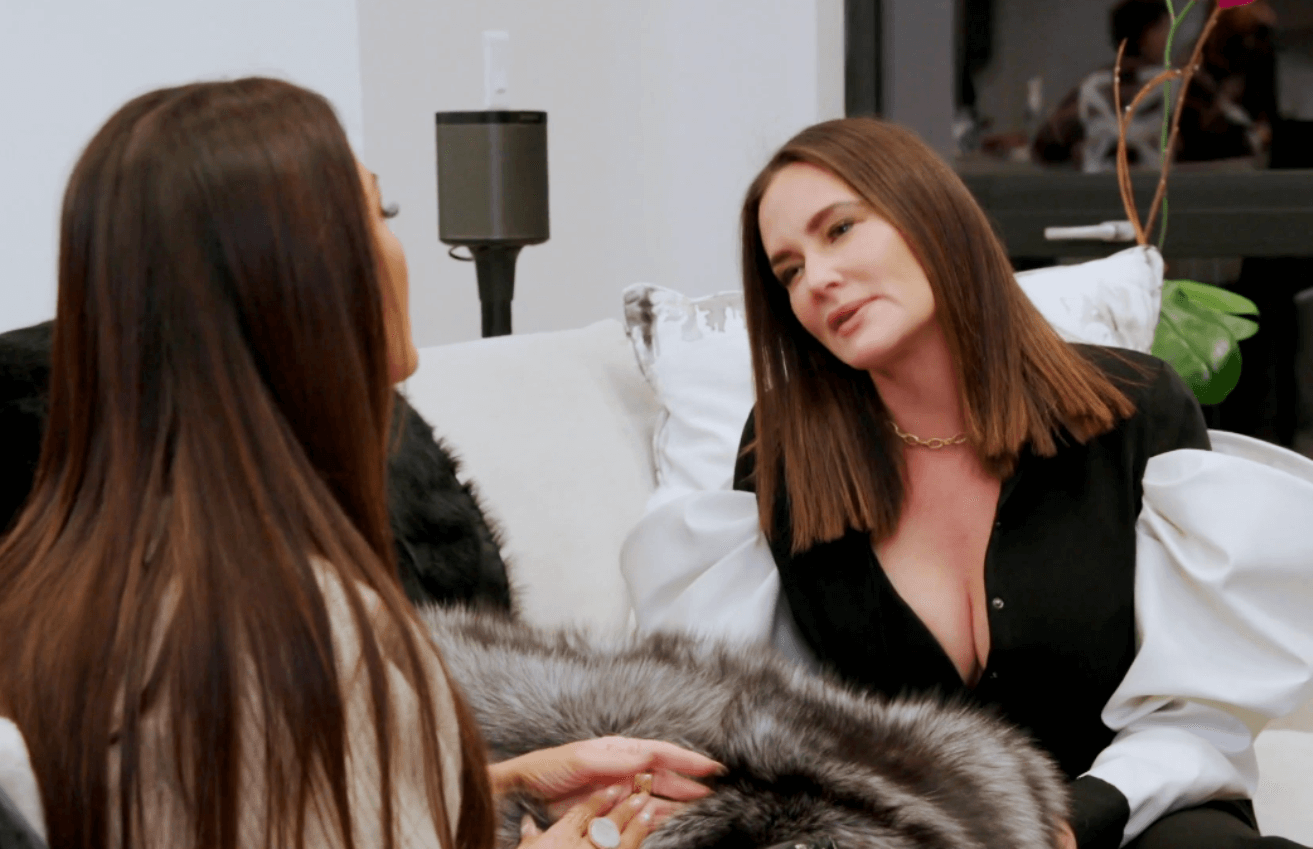 Last season on The Real Housewives of Salt Lake City, the ladies still had some deep resentments when the reunion ended. Heather Gay seemed emotional and hurt over things that happened throughout the season. Meredith Marks didn’t want to talk to the group about her marriage, and she’s still upset about Jen’s treatment of her55 son, Brooks Marks. Whitney Rose shared some sad news about her father. Lisa Barlow was struggling with her friendships. Jen Shah and Mary Cosby seemed to end at a good place. Let’s hope this season doesn’t have any references to grandfathers and hospital smells. This season will be explosive! The preview clips confirmed that not only will Jen Shah’s arrest be featured, it was also filmed. Jen says to Heather, “I have some bad news. I just got a phone call, and I need to go.” Lisa thinks that someone tipped off the federal agents that Jen was at that location. The police show up where the ladies are boarding a bus for a trip. Meredith and Mary are traveling separately to meet the group. Whitney, Heather, Lisa, and the newest Housewife, Jennie Nguyen, are shown traveling on the bus a reading real-time news on their phones about Jen’s arrest.

The federal agents caught up with Jen at her former Shah Chalet. Various news sources reported that Shah was arrested, along with her first assistant, Stuart Smith, in an alleged scheme to commit wire fraud and money laundering. 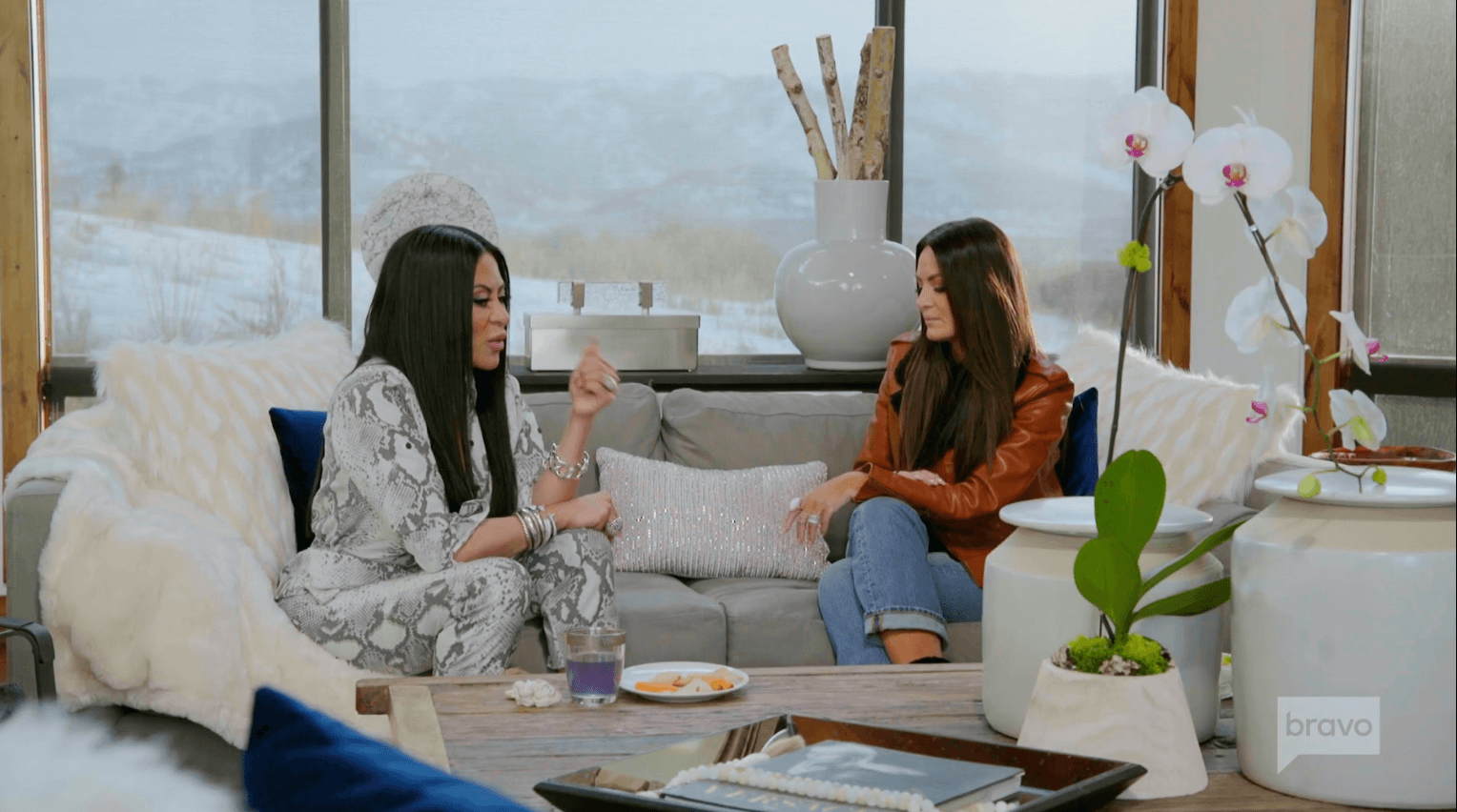 Two months earlier, we catch up with where the ladies are. Jen has a new Shah Chalet 2.0 in Park City, Utah. Lisa stops by Jen’s house for a visit. Jen’s closet full of clothing, shoes, and purses is enormous. Jen shares that the last six months were tough with Covid, sheltering at home, and her marriage. Jen shares that she and Coach Sharrieff Shah Sr. were on the verge of a divorce. Jen says that Sharrieff was tired of her getting angry, getting upset, and lashing out. Sharrieff left thinking that he couldn’t help her anymore. Sharrieff reached out to a divorce attorney the day after he left. Jen says that Sharrieff’s absence during her dad’s death was a turning point for her, but they are going to counseling and trying to work it out.

Lisa wants to figure out how to be friends with Meredith and friends with Jen. Lisa says, “To me, what Jen did to Meredith was not much different than what Heather and Whitney did to me. They perpetuated and created lies about me and my character.” Lisa is concerned that she will lose her ten-year friendship with Meredith if she doesn’t get Meredith and Jen to talk it out and be in a good place. Lisa doesn’t want to be in the middle. As Lisa and Jen discuss it, Jen says, “Girl, I’ll go to jail for you. I haven’t gone to jail, yet.” YIKES

At Meredith’s new house where she and Seth Marks started living together again, she dresses up her dog in a new Christian Cowan sweater. Heather arrives after skiing, and Meredith tells Heather that she and Seth are doing well. Heather tells Meredith that she’s hoping her daughter, Ashley Gay, chooses to go off to college, somewhere other than BYU. 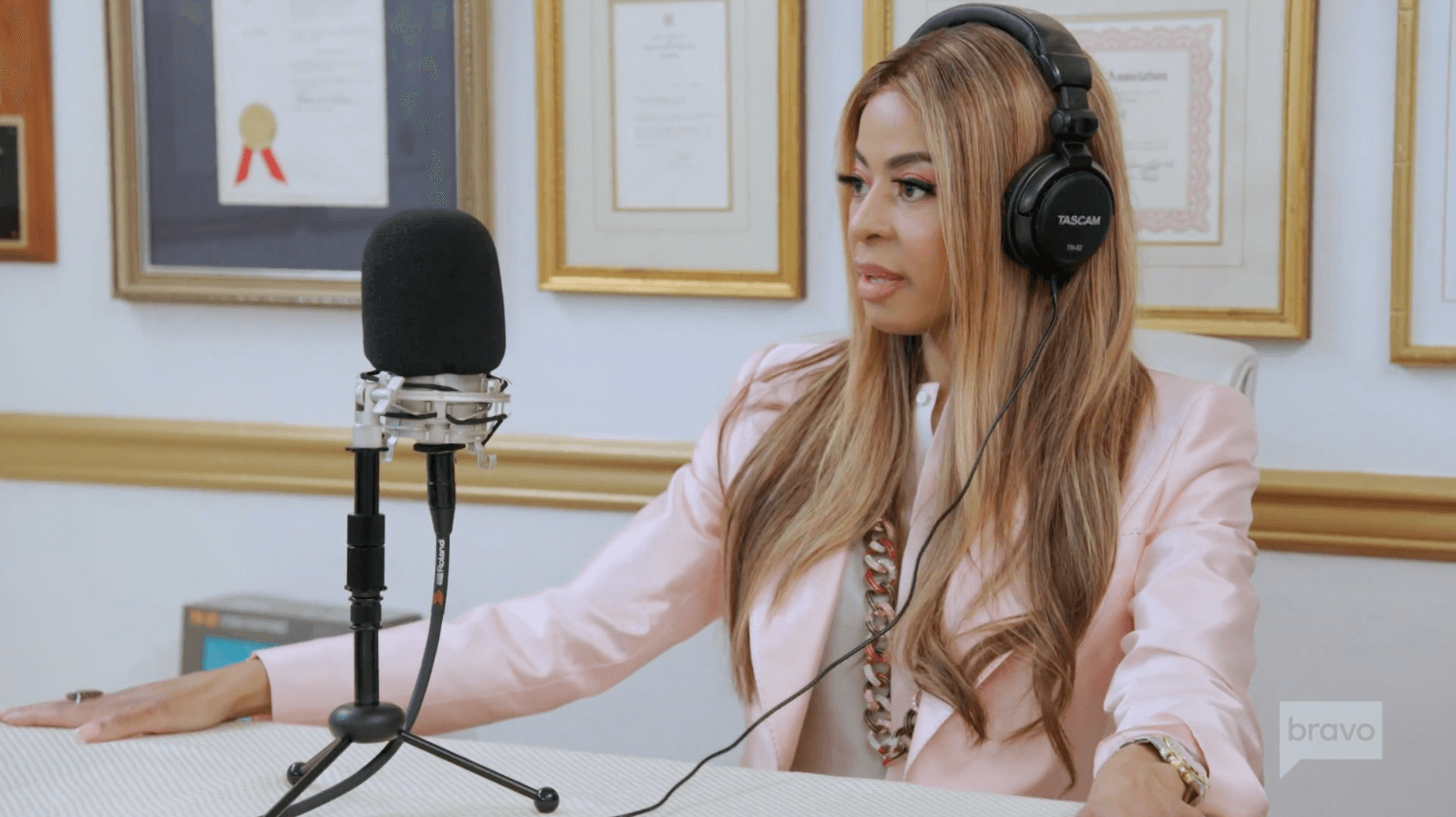 Whitney and Justin Rose have Justin’s sons, Trey, Austin, Austin’s wife Sam, and McCade, over for a hot tub party. Whitney shows the men the rebranding of her skincare line. ‘Iris and Beau’ is becoming ‘Wild Rose.’ Everyone’s having fun in the hot tub, and Whitney drops the cake not once, not twice, but three times. It looks like modeling for Justin’s adult children, “work hard and play hard,” has its drawbacks!

At Mary’s church, Faith Temple Church, Mary has been doing a live podcast during the pandemic instead of talking to herself and to her mannequins in her closet at home. During the pandemic, Robert Cosby Sr. was afraid to fly home and remained in Florida. Mary wants to open the podcast with a prayer, but she interrupts her technician John’s prayer to show him how to do it right. The topic of the podcast is how to reach the youth of today. Mary says that she was never liked as a child, but “when I came to God, that’s what makes me stay driven.” She continues by saying, “I was born for God.”

Lisa and Jennie have been friends for about a decade. Their sons, Atlas Nguyen and Jack Barlow, were in the same school, and Lisa and Jennie were both pregnant at the same time. Some of the Nguyens went skiing earlier in the day, but Karlin Nguyen says she didn’t go. School was more important. Lisa says, “You are straight As aren’t you?” And Karlin says, “That’s why we are A-sian not B-shian.” 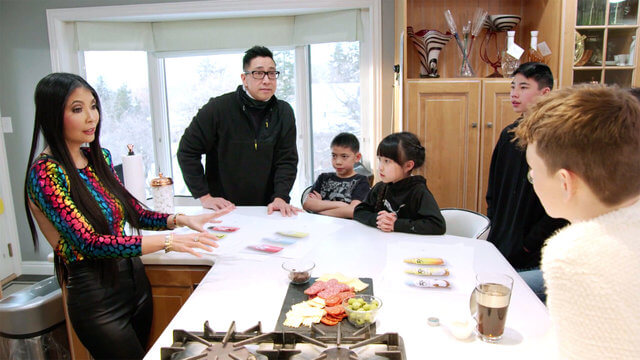 Jennie tells the story of how she and her family escaped the communists in Vietnam by hiding on a boat. Her family was captured by Thai pirates, and she was in a Thai refugee camp for about three years until a church in Long Beach, California, sponsored her family to come to America. Duy Nguyen, Jennie’s husband, is a chiropractor.

Jen’s Aunt, Nani, and Jen’s mom stop by Shah Chalet 2.0 for a family visit. Sharrieff and their sons, Sharrieff Shah Jr. and Omar Shah, and many extended family members are there. Jen’s mom is emotional because her husband, Jen’s father, isn’t there for these family times.

Heather, Mary, Whitney, and Meredith meet for lunch in an outdoor dining pod. Meredith shares right away that her father passed away. Meredith had experienced the loss of him mentally and emotionally with his years of dementia, and now she’s lost him physically. Heather and Mary both lost their fathers the prior year. Meredith says that she talked to Lisa about her dad. And Heather says she hasn’t talked to Lisa or Jen since the last time they were all together.

Jen is still re-posting things on social media. Meredith says that there has been so much damage and homophobic comments about Brooks. Brooks has never even talked about his own orientation to Jen, so Meredith is angry. Jen even posted a video of herself on social media mentioning that Brooks had never seen a vagina before. Meredith wants an apology to her entire family. Whitney wants to know from Meredith, “How would Lisa feel if Jen went after Jack and Henry, and you became Jen’s biggest supporter?” 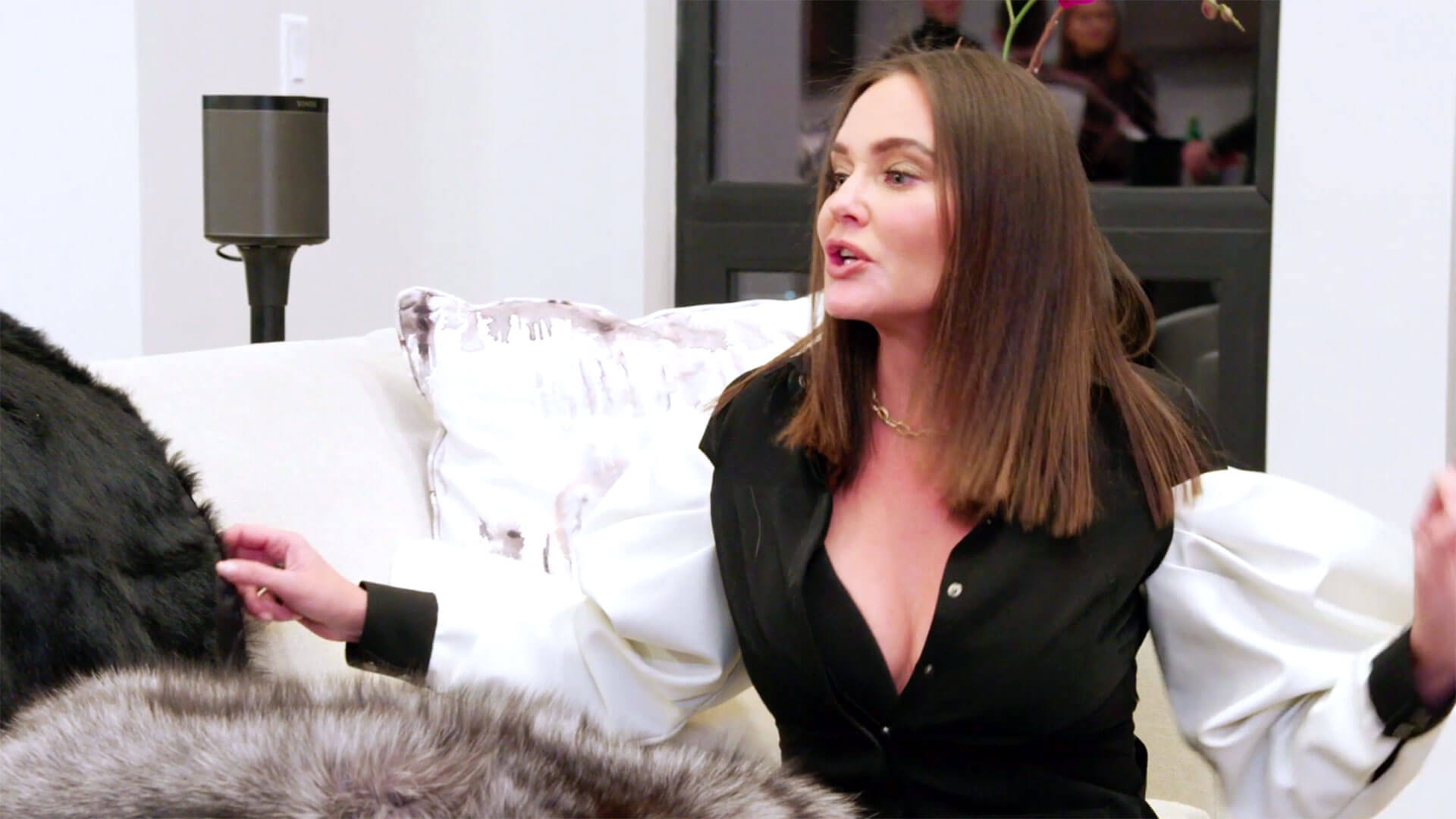 Lisa is hosting the Barlows for Shabbat dinner in honor of the loss of her father. Before dinner even starts, Lisa and Meredith sit down to talk. Lisa and Meredith are still at odds over Lisa’s friendship with Jen. Meredith is upset that Lisa continues to be friends with Jen knowing what Jen has done, very publicly, to Meredith’s family and particularly the hurtful vicious attacks on Brooks.

Meredith doesn’t want to debate or argue or have Jen put her finger in Meredith’s face. Lisa is really pushing for Meredith to allow Jen to talk to her and fix this. Lisa thinks that everyone needs to “hear” Jen and try to understand. But Meredith isn’t accepting that understanding where Jen is coming from is an excuse to mistreat people.

Then Lisa wants to know if Meredith sees her friendship with Heather as disloyal in the same way that Meredith sees Lisa’s friendship with Jen. Meredith thinks Lisa’s issues with Heather are not the same depth as Jen tormenting the Marks family for two years. Then Meredith poses the same question to Lisa that Whitney asked at the luncheon. Lisa digs in deeper on defending Jen saying that Jen might have been humiliated and gone into “defense mode.”

Lisa reaches out and takes Meredith’s hands and tells her that they need to figure this out together. They have been friends for too long. In Meredith’s production interview, she says that Lisa doesn’t want to even acknowledge that the social media bashing from Jen is even happening. 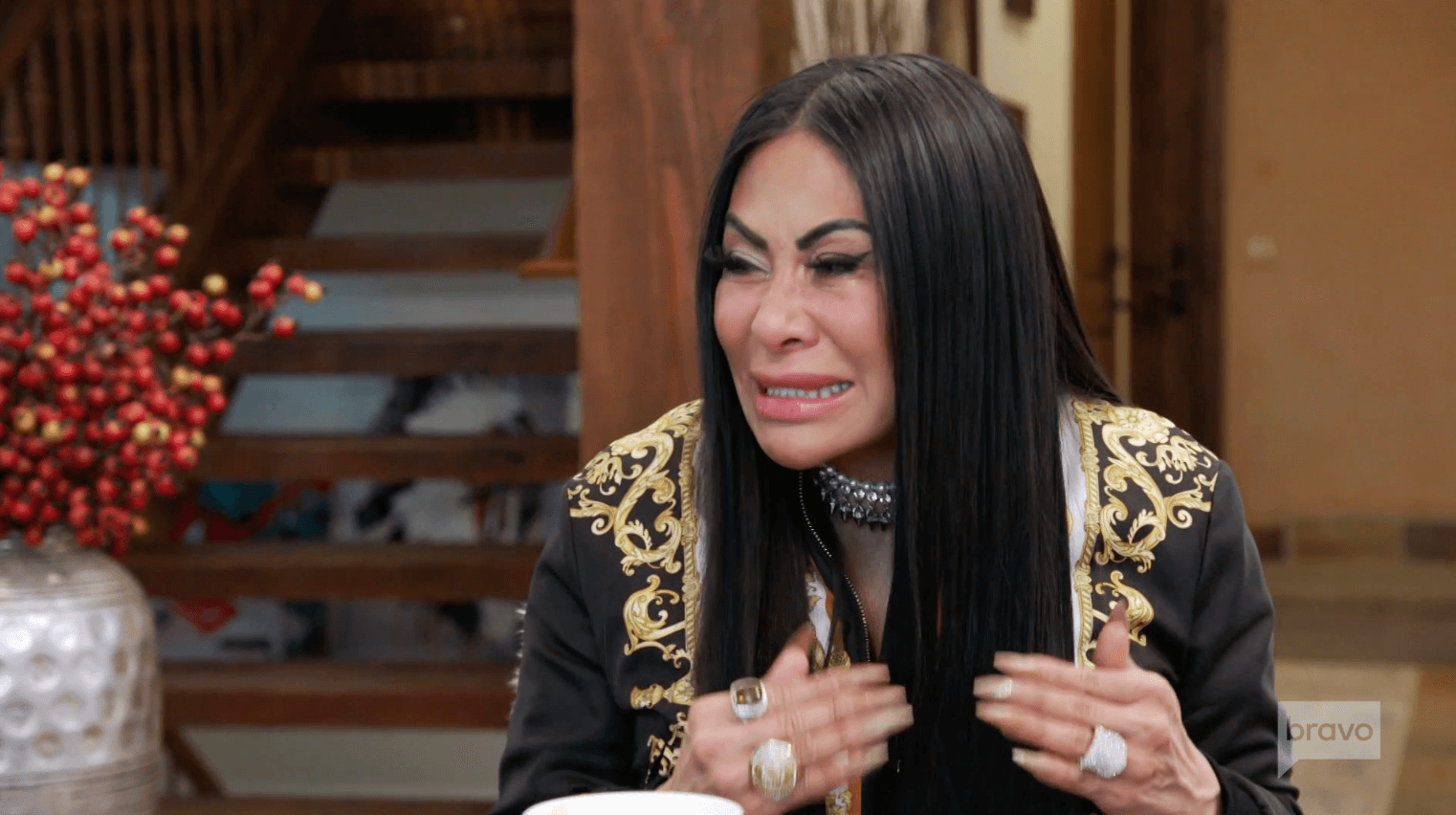 Coming up this season… meltdowns all around. Jennie’s husband mentions getting a sister wife. Whitney and her husband film something they probably shouldn’t. Meredith and Jen come to blows over Jen’s treatment of Brooks. Whitney alleges Mary is a cult leader. And, of course, we see friendships falter and allegiances form over the controversial allegations against Jen Shah and who may have tipped off the federal agents on Jen’s location leading up to her arrest. And just for a good dose of absurdity, there is a clip of Jen with her attorney asking, “Do we need to add Kim Kardashian to our legal team?”

The Salt Lake City ladies are back in a big way! Sound off in the comments!