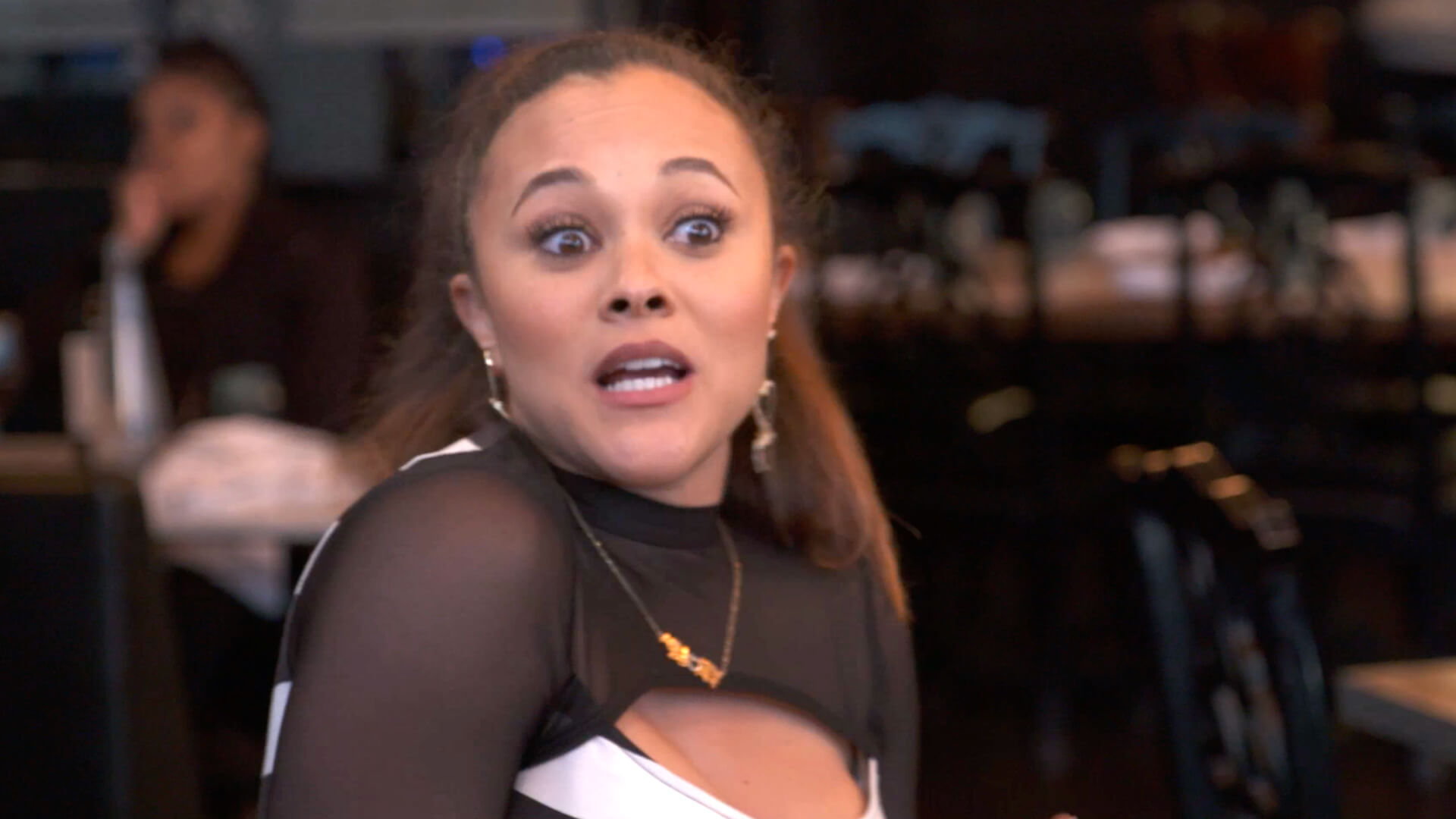 On a brand-new episode of The Real Housewives of Potomac, we see Ashley Darby changing baby Dylan as he proceeds to pass gas on her. Karen Huger is enjoying a nice foot massage from Ray Huger, as they discuss their upcoming vow renewal. At Mia Thornton’s house, she’s prepping for lunch with her mom and wants G to assist her. After some wardrobe assistance, Mia sits down with G to explain what she hopes to gain from the lunch with her mom. Mia wants her mom to feel better when she leaves than before she met with Mia. Although Mia’s super proud of her mother’s sobriety, she’s still a little nervous because she doesn’t want to say anything that’ll hurt her. Like any child that’s dealt with substance abuse in their family, Mia wants her mom to stay on the straight and narrow without feeling responsible for any potential relapse her mom may have.

G doesn’t think the lunch will be as bad as Mia thinks and gives her the reassurance that she can handle it, and everything will be alright. At Wendy Osefo’s, the kids are playing together in the kitchen as Wendy prepares to talk with Eddie about what happened in Williamsburg. Wendy asks Eddie if they missed her and expressed how happy she is that they enjoyed themselves. Wendy tells Eddie how she finds it ironic that the person with the most “volatile” relationship is the one who approached her about the “fake” rumors. Eddie’s upset he’s been dragged into the mess and claims to live his life a certain way. He thinks it’s downright mean and brings up the difficulty they went through to get married. Wendy thinks it’s hurtful for Gizelle to spread these “old rumors” and Eddie says Gizelle has to be hurt in order to project that hurt onto others.

Eddie tells Wendy that Gizelle can’t truly be happy for her, and Wendy agrees. Wendy doesn’t expect them to understand her reaction because according to Wendy, “they’ve never experienced the love that you and I have, and they never will.” At Gizelle “Lacks” Bryant’s house, the green-eyed bandits prepare to record an episode of their podcast. Robyn Dixon arrives and has trouble opening Gizelle’s janky sliding door. Gizelle admits in her confessional that in the beginning, neither she nor Robyn knew anything about podcasts. By some miracle, the two now have a deal with Black Effect and iHeart and now presents us with “Reasonably Shady.”

The green-eyed bandits begin and the topic is “relationships.” The pair looked up some statistics around cheating and the chance of the man cheating again. Gizelle slipped up by saying she wish she knew some of these numbers two years ago — and when the producers called her on it, she deflected. Gizelle admits to having her own statistics and says she’s learned “if you stay with that man long enough, yea, he’s cheating on you.” Whew. That woman is bitter! Robyn’s not surprised Gizelle and Jamal Bryant aren’t together and admits to never seeing them together. “They weren’t meant to be together,” Robyn says matter-of-factly and doesn’t seem to be afraid of the potential consequences of her words. Robyn shared her past experience with Juan Dixon and admits to turning a blind eye to his cheating when they were young.  Robyn was never walking away from Juan and Gizelle is surprised to hear that.

Gizelle switches gears and tells her listeners how she attempted to “check-in” with her girlfriend, but that her girlfriend took it as Gizelle being shady. We all know she’s referring to Wendy, and Robyn makes a failed attempt at defending Wendy’s honor. “Everybody’s human,” Robyn says, and Gizelle thinks friends should talk about “the good, the bad, and the ugly” (except when it comes to Gizelle and her fake relationship). At Candiace Dillard-Bassett’s house, Chris Bassett is making himself a drink while Candiace works on a group project for school. Candiace is overwhelmed with school and shooting her music video, and Chris tries to reassure Candiace that she has good people behind the scenes (like him) helping her out.

Chris asks Candiace how she liked the choreography he sent over, and after expressing her excitement, Candiace gleefully explains how she had the women compete in a dance-off in Williamsburg. Candiace tells Chris how much fun they had and how they needed it because Gizelle was being messy. Candiace babbles to Chris about Gizelle thinking Chris is riding on Candiace’s coattails and Chris initially laughs at the revelation. Chris tells Candiace that since she has supported him and his dreams, that now is the time for him to return the support. Candiace then explains her issue with Ashley and the bomb she dropped in Williamsburg. Calling Ashley “Forehead,” Candiace believes Ashley’s intent was to ruin her trip. Candiace thinks Ashley is gross and doesn’t have time for her.

Meanwhile, Ashley and Michael Darby visit Nurturing Touch & Wellness with baby Dylan for a checkup. Ashely divulges that baby Dylan is having trouble latching and now requires Ashley to breastfeed him every hour.  Ashley is drained and feels bad because she doesn’t have enough energy to give to Michael, therefore, creating yet another challenge in their marriage. Michael gives the massage therapist the third degree and demands her credentials without allowing her to get a word in. Ashley allows her husband to take control of the appointment and baby Dylan is fast asleep afterward. During the car ride home, Ashley hopes the appointment helps and wants to avoid surgery for baby Dylan. Michael is looking forward to having Ashley all to himself again and Ashley expresses her gratitude for Michael’s patience. Michael was almost in the clear until he began commenting on how fast Ashley is getting back into shape.

We can tell Ashley felt some type of way but held her tongue for Michael’s sake. SMH, this man never learns! At Robyn’s house, Carter lets his mom know that he got a lot of work done. Robyn inquires about his focus in class while questioning Carter about whether he notices Robyn’s laziness. Robyn explains to her son that she’s going to talk with a life coach about getting her life together. Carter doesn’t understand but still shades his mom by wondering why she doesn’t have her life together, LOL. Robyn calls and schedules an appointment with a life coach named Denise and seems hopeful at the prospect of feeling better. Across town, Mia is meeting her mother for lunch. The two get seated and Mia is genuinely happy to see her. The women order drinks and Mia is nervous.

Once their orders are in, Mia catches her mother up on how the kids are doing as they laugh about the youngest attitude. Veronica tells Mia that she gets her personality from her dad and reveals Mia used to get on her nerves because she acts just like her father. Mia asks Veronica what her father did, and Veronica is hesitant to share her experience with him. Veronica tells Mia that her father introduced her to drugs, and on the night of Mia’s accident, he was in the basement with another woman. Veronica also revealed that she attempted suicide over Mia’s father. Both women become emotional and Mia tells her mother she wants to be in her life. Such a beautiful start to rebuilding their relationship. Karen meets with her friend Vivien where she’s searching for a second dress for the vow renewal. The venue is secure, but Karen has gone over budget already. Not missing a beat, Karen begins shopping around as Wendy arrives.

Mia shows up shortly after and shades the exterior of the boutique. Mimosas were passed around and Karen gives a toast to thank the ladies for helping her pick out the second dress. As Karen begins trying on dresses, Wendy and Mia catch up on how things are going since Williamsburg. Mia doesn’t think it was fair that Wendy was bombarded on the trip and that Gizelle should’ve brought the rumors directly to Wendy. After Karen models her first choice, Mia finds out they’re inside the venue for Karen’s vow renewal. Mia’s surprised but plays it off as she compliments the interior of the venue. Karen thanks the ladies for joining her and Mia revealed she received an invite to celebrate Robyn’s birthday but noticed Karen and Wendy were excluded.

Oh, messy Mia. Wendy didn’t expect an invite from Gizelle and Mia wonders why Gizelle is taking over the guestlist for Robyn’s celebration. Karen’s unwilling to kick a dog while it’s down, but Wendy makes a point that the dog shouldn’t be allowed to kick Karen either. Gizelle’s dealing with the shame of being exposed, so Karen offers a compromise for Gizelle. Giving the message to Mia to deliver, Karen wants Gizelle to admit that she regrets using the word “death.” Karen claims she’ll be able to move on afterwards, but something tells me she’s not getting an apology. Candiace and Chris are eating out and Candiace continues struggling with her responsibilities. While Chris discusses her upcoming schedule, Candiace gets agitated that Chris is working during her video shoot.

Feeling the pressure, Candiace begins to pout and a tantrum is brewing. Chris tells Candiace he’s playing golf that afternoon, and Candiace tells him he’s never there to support her. Chris tries to defend himself, but Candiace wants him to check his attitude before she curses him out! Chris leaves the table and Candiace with the check! Chris has had it and they continue bickering as they drive away. Later that night, Gizelle meets Mia, Ashley, Askale Davis, and Candiace out to celebrate Robyn’s birthday. Candiace notices people are missing and asks Robyn about her friendship with Wendy. Robyn’s still skeptical of Wendy and Gizelle asks Ashley if she added hot sauce to the conversation with Wendy. Ashley denies adding anything and reiterated what she told Wendy. Askale thinks Ashley’s approach is assuming the blogs are right and Candiace thinks Wendy felt attacked. Ashley attempts to defend her position, but Candiace calls Ashley a h*e out of nowhere! Ashley’s thrown off but says Candiace doesn’t have any legs to stand on. Candiace calls Ashley “wide-bodied a**” and Ashley tells Candiace that she’s body-shaming her. Candiace continues throwing out insults about Ashley’s forehead and body and the ladies are left speechless! OMG, these ladies are not playing! Stay tuned and come back next week for a new episode of The Real Housewives of Potomac!