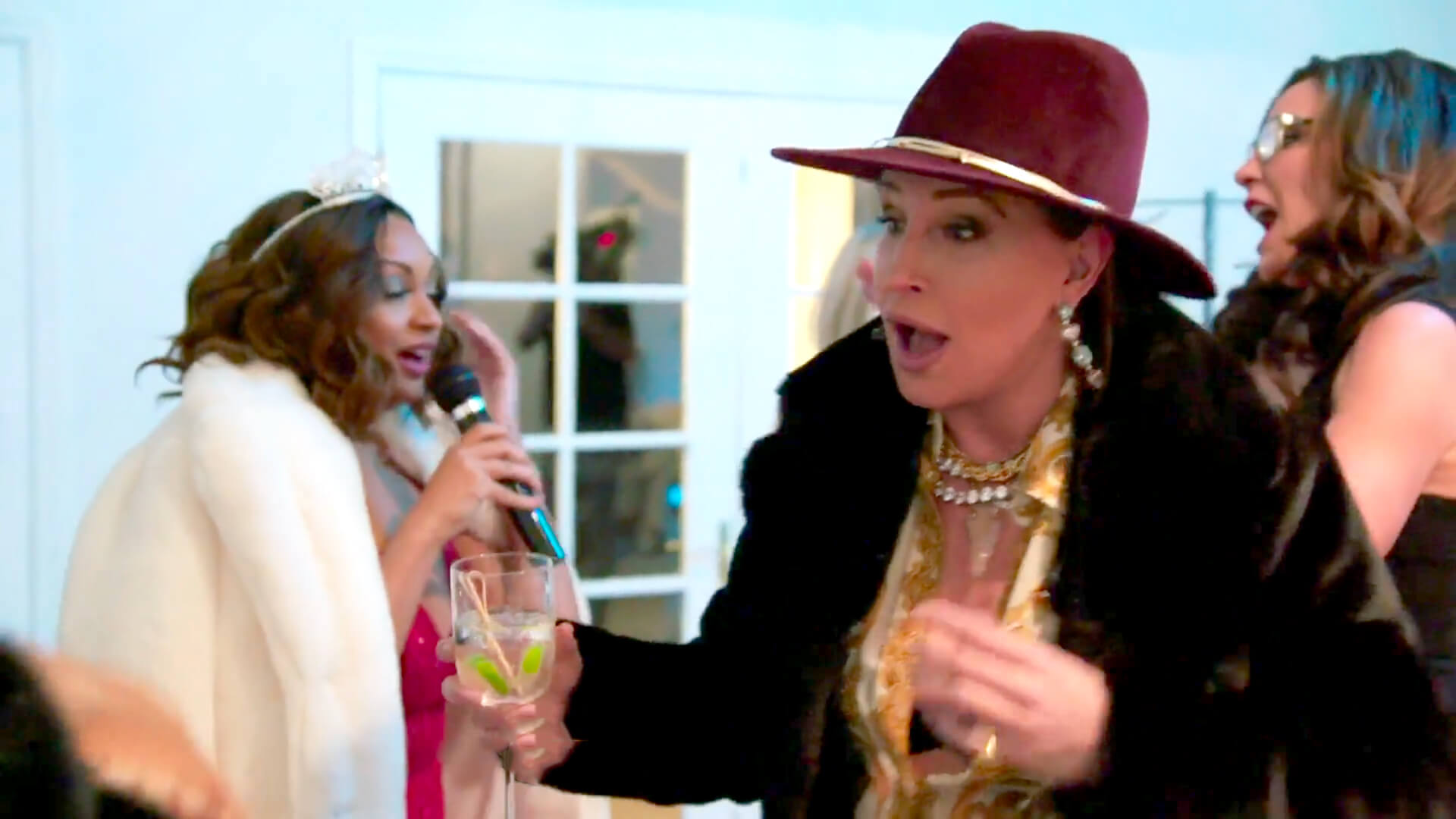 Tonight on the season finale of The Real Housewives of New York City, the ladies are still in the Hamptons at Ramona Singer’s house. Things seem to be going well with bedazzled boobs, game night, and plate breaking. Will it end in a good way? Is Harry Dubin hiding outside in the bushes?

When Harry calls just after the “pin the tail on Harry,” game, Ramona is embarrassed. Luann de Lesseps and Sonja Morgan answer the call and pretend to be Ramona. As Luann and Sonja try not to laugh, Eboni K. Williams says, “I don’t think he has that much money either, though. He doesn’t have enough money for me.” Eboni goes on to say, “Ramona might have more money than him.” And Leah McSweeney chimes in with, “But these women are, like, thirsting over him.” Then, Eboni concludes, “He’s familiar dick. He’s community dick.”

Ramona breaks through the fun to tell Harry that he’s talking to Sonja and Luann. Then Harry and Sonja spar a little bit about why she stays away from him saying, “You cheated on me. Then you slept with all my girlfriends.” It’s a good thing that it wasn’t Ramona’s 50 good girlfriends, right? Luann thinks it might be possible that Ramona is friends with lots of guys without hooking up, but not friends with Harry without hooking up.

Leah wants to change the topic and go around the room to have each of the girls share their best and worst sexual experiences. Ramona says the worst was that she had a boyfriend in high school, and then she cheated on him with a boy in college who had a very small penis. And she felt like God was punishing her for cheating.

Eboni says that her Chocolate Adonis was the worst. He was at her place and she says, “I didn’t get to see the preview.” And then she says, “boom, boom, done.” For Sonja, she says she can tell a lot by what happens when she dances and rubs up against them. Sonja says that for her, it’s about romance and what happens in her mind. Leah pushes for a specific experience from Sonja. Sonja likes things to be spontaneous (and apparently a bit voyeuristic). “Sex in an elevator, sex on the plane, like put you up on the wall… .”

Ramona asks Leah, “How many people have you shown your new breasts to?” And Leah says, “none.” Ramona brings out the bedazzle stickers for everyone and then flashes Leah to show her. Leah comes into the room topless and dancing. Ramona tries to put the stickers on for Sonja, but Sonja says, “Don’t just try to stick the decal on. Get romantic. Don’t be all like… let me get the job done.” It looks like Ramona licks her and puts the stickers on. Luann comes in topless. Then Ramona takes off her shirt. Eboni joins in. Dance party!

The next morning, everyone thinks they had a good time at the party the night before. The ladies head to town to Calissa, a Greek Restaurant. They might just have a nice, quiet, drama-free lunch. They decide to share their best Valentine memories. And Leah says, “I have none.” Ramona shares that Mario Singer used to pick the best cards and then write special notes in the card. Leah does remember one time when she was traveling that Rob Cristofaro sent her a romantic telegram. Leah and Luann bond over saving voicemails as Leah starts to choke up. Leah hesitates to start a new life with someone because she and Rob are still so close. Leah doesn’t want to mess that up.

Ramona asks the manager, James, if they can all break dishes. James tells them that the Greek plate-breaking tradition is to banish evil spirits and to make a wish for good luck. It was fun watching them do that!

Bershan Shaw finally arrives for the identity swap dinner/roasting of each other. Luann has cards of Eboni-isms. Sonja says that if she wears big shoes, a hat, and a bunch of labels, she can look like Bershan. Eboni is dressing like Luann in Jovani with a crown and a microphone, channeling cabaret Luann for the night. Bershan is dressed in Century 21, saying a classic line, “I didn’t just marry a banker, I married the bank.” Ramona is really enjoying being Leah, but she can’t quite figure out the chewing gum. Ramona is doing her best to be loud, inappropriate, and crass.

Leah gets help in the kitchen, adding a little Pinot Grigio to her plasma bag. Bershan loves Leah’s impersonation of Ramona. And Bershan is getting a kick out of Eboni’s impersonation of Luann. Eboni gets the biggest charge out of Luann’s impression of her. No one can believe what Ramona looks like as Leah. And Ramona thinks Leah’s Pinot Grigio IV bag is funny. Sonja can barely get down the stairs in those shoes. Bershan and Sonja bond over their impressions of each other. Bershan says, “under 200,” all in good fun. Ramona as Leah flirts with the bartender. Ramona as Ramona flirts with everyone! Eboni as Luann sings happily to Leah as Ramona, and it’s hilarious. It’s too bad that it took until the final two episodes of the season to get to the light-hearted fun. So many people have stopped watching by now.

As the ladies answer questions in character around the table, they laugh at each other’s answers, and they have some heartfelt moments. As they wrap up the season, Luann is starting her own non-alcoholic rosé venture. Ramona is now officially expanding into real estate. And she bought a waterfront condo in Palm Beach, near Harry Dubin. Eboni is connecting with her new biological family and dating again. Sonja rented out her townhouse again and is creating a new “Comedy Caburlesque” show. Leah is finalizing her conversion to Judaism. Leah tells the group that America could take notes on how they all listened to each other about politics, race, and the pandemic. Leah says that even though they disagree, they found things they love about each other.

The preview at the end of the episode looks like it might be an “extra clips” or “what wasn’t shown” episode instead of a reunion next week. It would be nice to see more light-hearted fun. Are the rumors true that a reunion hasn’t been filmed yet?