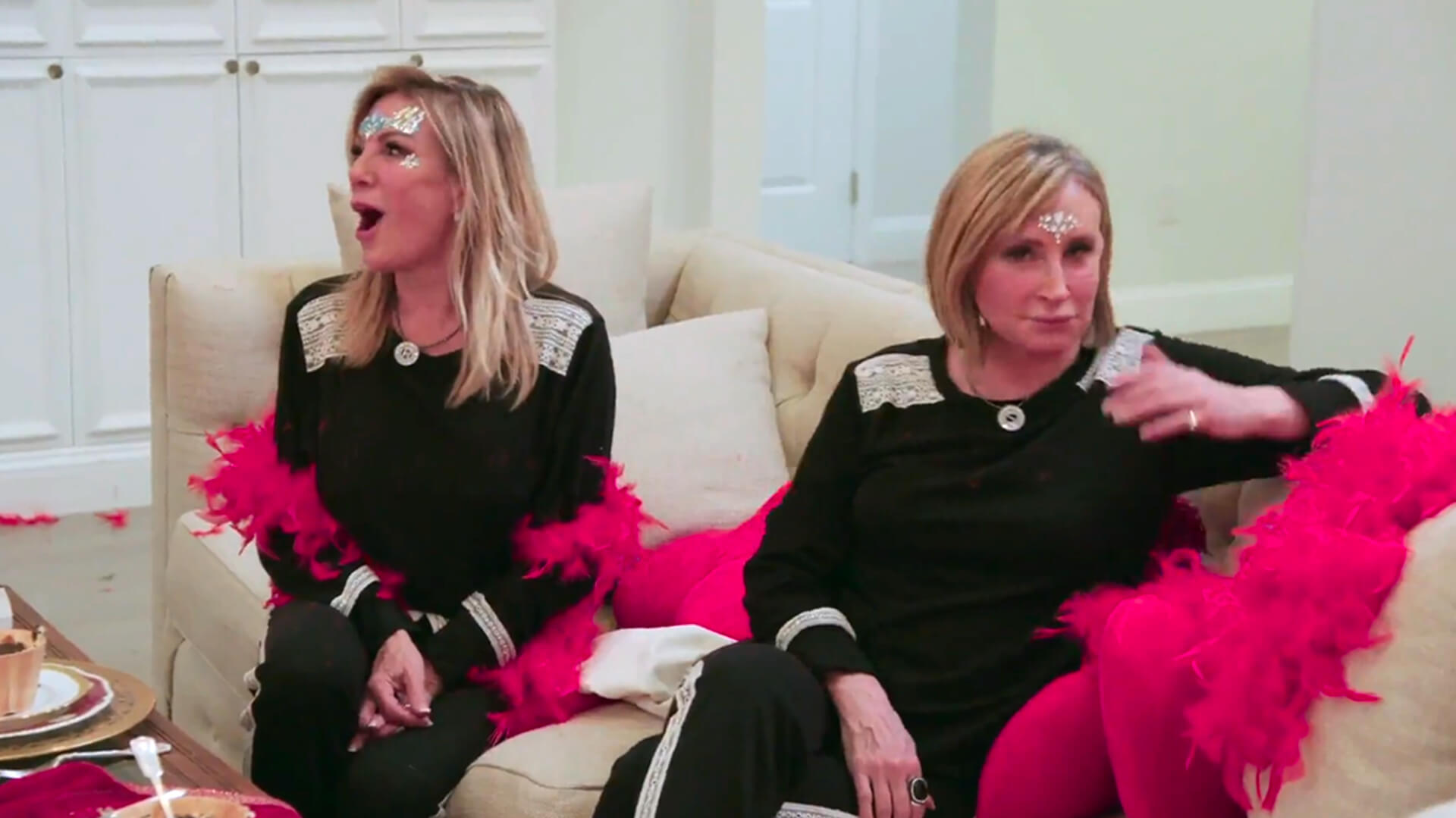 This week on The Real Housewives of New York City, the ladies continue to worry about Sonja Morgan. Leah McSweeney has more difficulty with her mother during a family dinner. And it’s time for a game of Pin the Tail on Harry Dubin for a Galentine party.

At Ramona Singer’s apartment, she’s exercising with her coach on Zoom. Eboni K. Williams’s working on her podcast. Sonja and her assistant are in her garden, in the snow, checking on the fish. Sonja climbs a rod-iron fence in a parka (and apparently little else) to check on the water in the pond. Does this girl own underwear?

‘RHONY’ RECAP: Sonja Diagnosed With COVID, Eboni Finds Her Dad And Learns She Has Two Sisters!

Leah’s preparing for her family to arrive for dinner. Bryan, Bunny, and Daniel are having a kosher meal with her and she’s talking about her conversion to Judaism. Her dad asks about her book deal, and she tells them that she got it. Leah says it’s going to be “part memoir, part prescriptive.” In her production interview, she calls it “an anti-self-help, self-help book” and defines that as a book you might want to read even though she doesn’t think she should be giving advice. Leah talks about her rough high school years. Bunny tells Leah that drugs and alcohol can rob people of their life. Leah’s mom sees those years as lost to her. Bunny says, “Those are years that would have been very cherished by us and we lost.” Even on the verge of sending a daughter to an elite high school, Leah still can’t empathize with her parents’ losses over her tumultuous high school years.

Ramona’s studying for the real estate exams. Sonja calls Ramona to tell her that she and her assistant have Covid, and before Sonja can even finish her sentence, Ramona tells a story that she thought last night, she might have it, too. Ramona just can’t help but make it about her.

Fast forward, four weeks later, Eboni says that her father was, in fact, one of the three brothers that the genetic investigator, Linda, said he was. Linda arranged a DNA test for one of the brothers, and he is Eboni’s father. Eboni calls him on the phone and leaves a message for him.

In Sonja’s townhouse, her assistant and interns are gathered. Sonja tells her interns that her friends reached out, sent flowers, and checked on her when she had Covid and was sick. Once the doctor cleared her, Leah and Eboni came for a visit bringing vitamins and zinc for her. Sonja seems to be slurring her words a bit. Something’s not quite right. Ramona invited Sonja to the Hamptons for a visit.

Luann de Lesseps’ is at her Sag Harbor house and decides to head to Ramona’s weekend for a Single-Girl Valentine’s weekend. Luann calls Sonja to talk about their weekend plans. After they talk, Sonja forgets to hang up the phone and says to her interns, “Oh my God, I speak so much sh%t about Lu and I love her so much. I do love Ramona, too, but I always say sh%t about them. I love them. I just can’t stop talking sh%t.” Luann is laughing at hearing this. And then Luann yells, “I can f-ing hear you.” Luann thinks Sonja was wasted when they were talking.

Eboni, Leah, and Sonja ride to the Hamptons together. The first discussion is the rooms. It’s always about the rooms with these women. Leah doesn’t want to be in the same room as the last trip. They discuss putting Bershan Shaw in the famed “lower level.” Ramona’s getting the house ready. Luann arrives with a huge Jovani bag. Maybe it’s a homage to Dorinda Medley. Luann recounts to Ramona that she thought Sonja was wasted the day before and Sonja was talking smack about her. Ramona says that when Sonja gets drunk, Sonja resents that Luann and Ramona have moved on after divorce and are doing well.

Leah is hoping to have fun now that she’s in a better headspace after her grandmother’s passing. Luann had an idea to do an “identity swap” dinner. Leah thinks it’s going to be funny to be Ramona with an IV stand and an IV bag that says “Covid blood plasma.” This is going to be fun. Probably not.

The usual chaos ensues with baggage—who’s carrying bags, who’s in which room, and Ramona not wanting anyone to scratch the floors. Sonja is very emotional. She starts the weekend by apologizing to Ramona for her behavior at the Black Shabbat dinner. Ramona isn’t angry. She forgives her. Sonja says she needs to apologize to many people including Luann and Archie, the host of Black Shabbat.

Ramona thinks that bonding could happen if everyone wears “loungy outfits” that are the same. Ramona bought face sparkles and feather boas. Luann asks Sonja what happened to her blind date, Brad. Sonja says that when she was sick, he didn’t even send her a chicken in a pot. It fizzled out. Luann and Sonja decide maybe they need to find men in Europe.

Sonja and Luann have a heart-to-heart conversation in the closet. Luann really cares for Sonja and feels like Sonja’s punching bag. They hug it out. The women all gather to eat by the fire in their matching jammies and feather boas. They talk about where they want to travel when they can again. Eboni wants to show the ladies New Orleans. Then Eboni shares that she found her father. She has two sisters. And they are welcoming her into the family. Leah says in 2021 she needs to try something new, so she wants to find a sugar daddy.

Now it’s time for Luann’s game of Pin the Tail on Harry Dubin. Luann says, “Three out of five of us have dipped our toe in the ‘Harry pond.’” Ewwww. There’s a montage of Sonja with Harry, Luann with Harry, and Ramona with Harry, not to mention that Aviva Drescher was married to him. Ramona thinks it’s disrespectful. Sonja is upset that Harry was hers first. Sonja says, “He’s my ex-boyfriend who cheated on me and f-ed all my friends.” Sonja wanders off to get more wine. And then Sonja comes back to play the game. Eboni was the farthest away from pinning the lips on Harry, so she has to kiss the photo of Harry. As Eboni kisses the photo of Harry, the real Harry actually calls Ramona.

Next week on the season finale, Ramona flashes her bedazzled boobs to the group. Then the girls decide to go topless and jump around. Galentine’s has taken a turn. They break plates while eating Greek food. Leah breaks down, and Bershan shows up just in time for the “identity swap” dinner. Is it possible to have a dinner without a meltdown? Probably not!