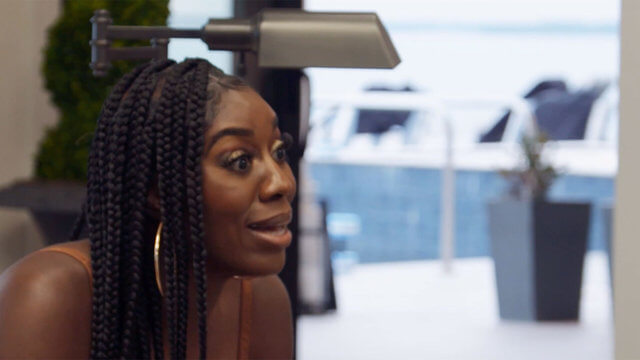 Dr. Wendy Osefo puts Gizelle Bryant “on notice” in the upcoming episode of the Real Housewives of Potomac.

Gizelle broke the news that there were rumors swirling about Wendy’s husband, and the gossip carried over into a conversation between Gizelle and Robyn Dixon, which was featured on Sunday’s episode. The ladies wondered if Wendy’s sexy makeover and personality shift were reactions to the rumors, during the aired discussion.

Wendy pointed out on Twitter that the women never brought up their concerns to her face.

“So concerned, but when I walk in the room?! CRICKETS,” Wendy tweeted as the episode aired.

Wendy spoke out about the exchange during a post-episode appearance on Watch What Happens Live with Andy Cohen.

“It’s always funny when people talk about a marriage but they have not successfully been married,” Wendy jabbed.

Wendy cranks up the heat in this Sunday’s episode, as teased in a released preview.

“I am putting your ass on notice,” Wendy fires at Gizelle in the Bravo preview clip. “Don’t f**k with my family.”

Gizelle opened up about the brewing cast conflict ahead of the show’s premiere in a July interview with E!.

The reality star also spoke out about her heated confrontation with Wendy teased in the Season 6 trailer.

“I would be curious to see how the season plays out and how Wendy feels about the season as she views it,” Gizelle said. “I want Wendy to be a viewer this season because I think she was thinking a lot of things happened that didn’t.”

Gizelle added that she had no issues with her castmate—but that Wendy might not feel the same way.

“Listen, I have always been fine with her,” the mom-of-three said. “She might not be fine with me, but I’m fine.”

Wendy has not been shy about putting Gizelle on blast as the drama plays out to fans.

Gizelle raised an eyebrow at Wendy’s sexpot makeover during the August 8 episode, commenting that their castmate was not “the Wendy they met.” She then remarked to Ashley Darby that Wendy’s behavior might be a reaction to cheating rumors circulating about her husband, Eddie Osefo.

We all saw you @GizelleBryant bring up the false rumors in this scene. You were so PRESSED to make sure it made air, you said it AGAIN. Girl you r not a friend nor were you concerned. You just have a history of attacking marriages! I pray you find happiness in ur own life. #RHOP pic.twitter.com/V5O48XcoRp

“We all saw you [Gizelle] bring up the false rumors in this scene,” Wendy fired on Twitter. “You were so PRESSED to make sure it made air, you said it AGAIN. Girl you [are] not a friend nor were you concerned. You just have a history of attacking marriages! I pray you find happiness in [your] own life.”