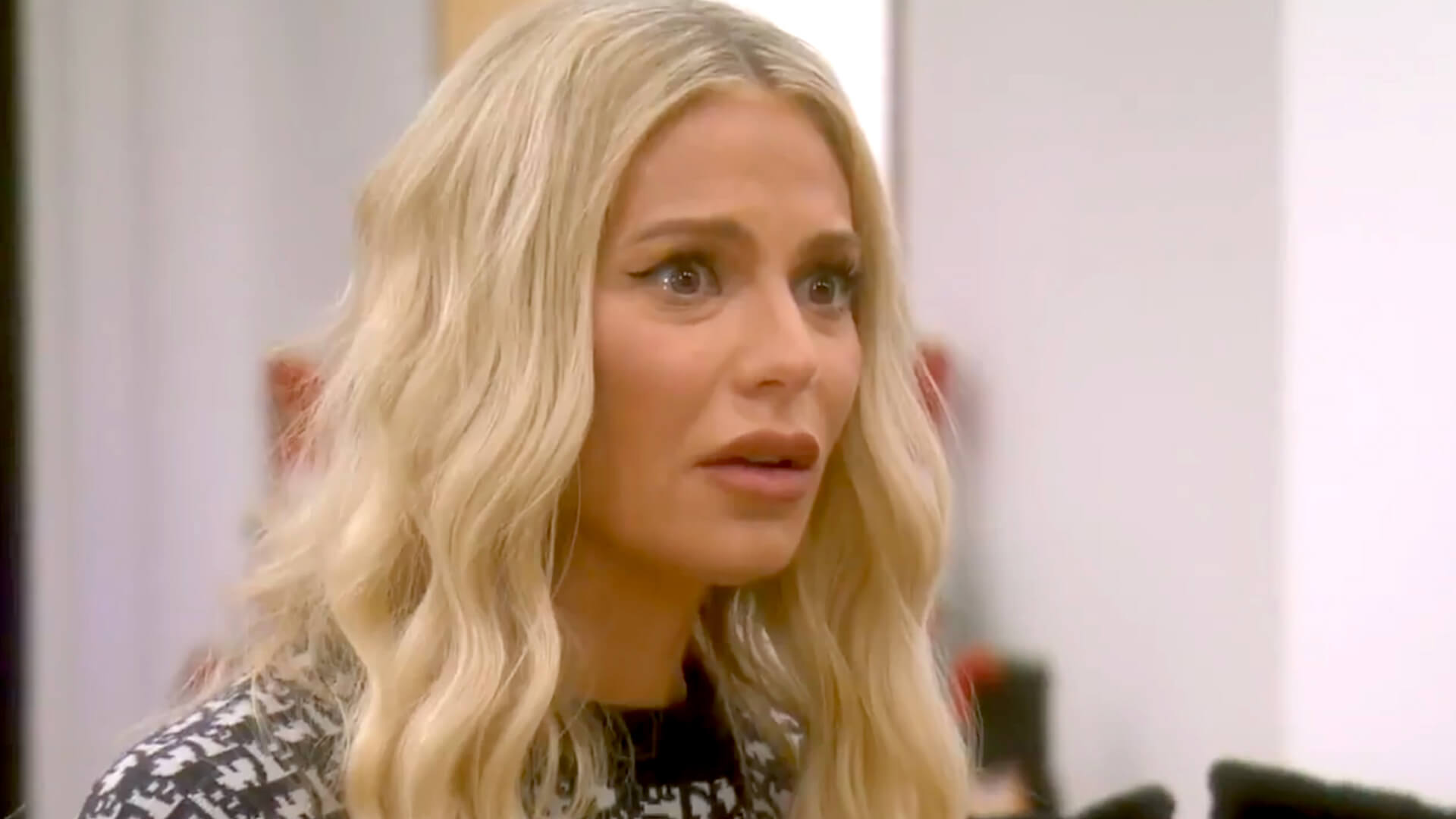 Last week on The Real Housewives of Beverly Hills, when Garcelle Beauvais told the group that Tom Girardi was still calling Erika Girardi every day (and Erika says she wasn’t talking to him), Erika blasted Garcelle for betraying her trust and then ran to the bathroom. What more could happen on their last day at Kyle Richards’ house in La Quinta?

As the ladies try to figure out why Erika is acting like she is, they hug her and try to bring her back to the group. Lisa Rinna put her arms around Erika and says, “I’m sorry that happened.” Garcelle sees that as Lisa not supporting Garcelle, making a little jab that Garcelle did something wrong. Garcelle decides to go back to her hotel, but then Kathy Hilton asks Garcelle to come back to the group and sit for a minute. Garcelle apologizes again. Erika doesn’t really apologize to Garcelle, but she does tell her “it’s ok.” Garcelle apologizes again, and Erika keeps saying “it’s ok.” Sutton Stracke and Kyle in their production interviews are starting to question more what’s going on and what else do they not know.

Erika walks out of Kyle’s home to go back to L.A. Kyle, Kathy, Lisa, and Dorit Kemsley follow her to stay with her while she waits for her ride. Sutton, Garcelle, and Crystal Kung Minkoff remain on the couch. Sutton and Crystal tell Garcelle that this isn’t about her and it’s not her fault. Garcelle notices that the “ones who have been friends the most” are with Erika, and the three of them are on the couch. When all of the ladies are back on the couch, Garcelle is visibly upset when Lisa asks, “Why did you feel like you had to ask that in that moment?” Garcelle is wondering why Lisa said that, but everyone seems to agree that Erika is upset about far more than that small piece of information that she revealed herself already on camera. Garcelle and Crystal head back to the hotel to get ready for dinner. As they wait for their ride, Garcelle admits to Crystal that she is not in the inner circle of this group. Then Lisa OF ALL PEOPLE says, “I don’t think it’s our job to ask her questions unless she wants to share it.” 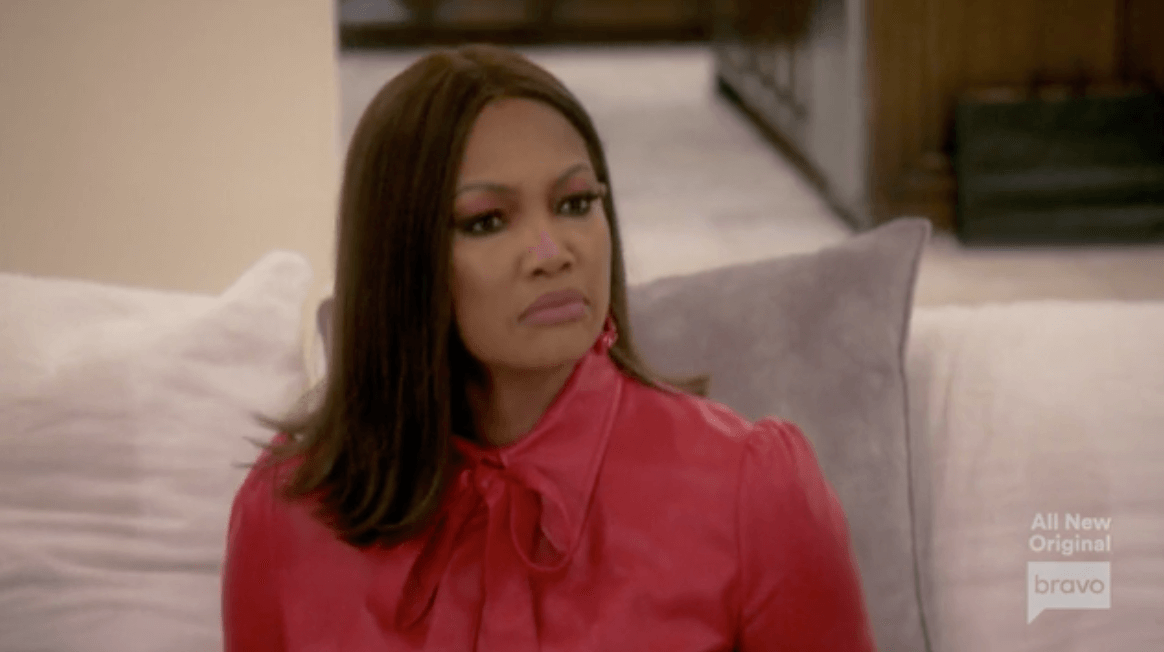 As the “inner circle” attempts to find out more, they go to their phones. Garcelle asks directly. The “inner circle” doesn’t. Erika has mentioned earlier that there was a court hearing, and she was waiting for news. On Dec 16, 2020, there were reports that an involuntary bankruptcy petition was filed. Dorit, the law expert, translates that Erika won’t get a dime if she’s attached to this bankruptcy. Kathy walks in with the Ruth’s Chris steakhouse menu, roaming around, talking about sweet potatoes. Sutton goes to set the table.

What on earth is Dorit wearing to dinner? Once again, she brings her purse downstairs to dinner. Sutton says Dorit looks like “naughty Santa’s helper” and she looks like “sweet Santa’s helper.” Lisa asks Sutton about her bracelet. There you go, Lisa, asking a question, “Is it real?” Sutton says, “It’s vintage Cartier.” And Lisa says, “You’re so rich. I forget.”

As they gather again on the couches, Kathy sneezes on Dorit, not a small thing during Covid times. Kyle had been texting with Erika. Garcelle texted Erika and Erika didn’t respond. Lisa took a couple of potshots at Garcelle again. Lisa wants Garcelle to recognize that she doesn’t have anyone’s back. Then Lisa wants Garcelle to look for “any part she can ‘own’ in it.” Sigh. Garcelle says Lisa is being hypocritical given how Lisa treated Denise Richards. Garcelle is really upset, and Lisa says she just wants to understand what happened. 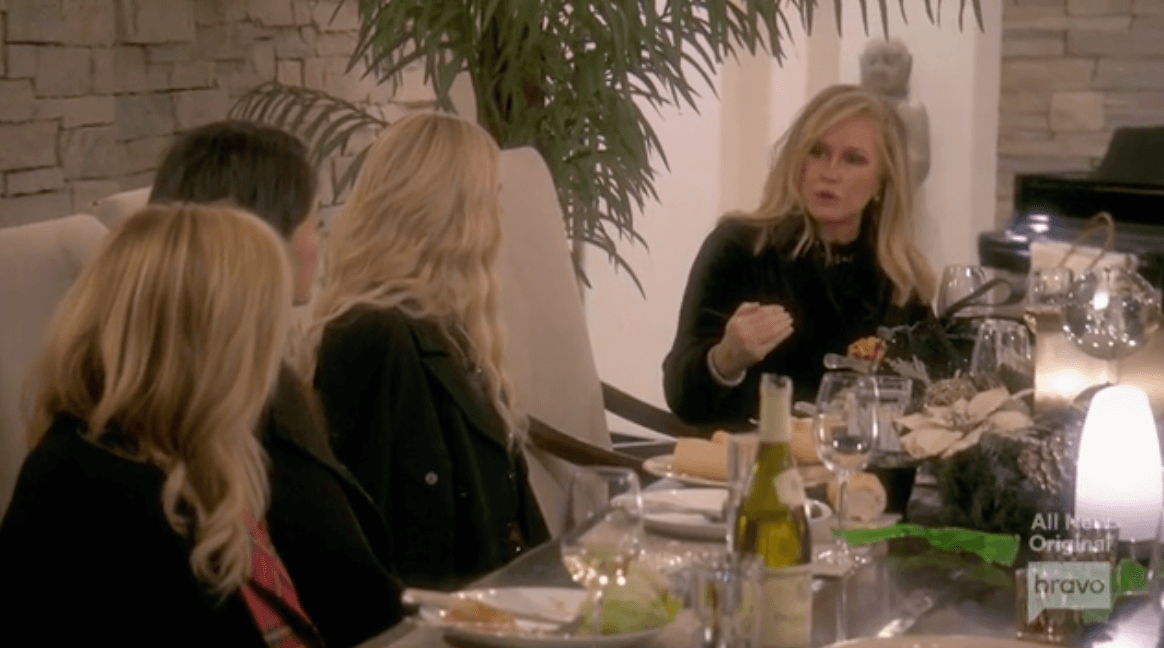 As the women sit to eat, Kathy thinks someone is missing. Of course, Erika is missing, but that’s not who she thought. She’s so odd. Kathy wants to play a game. Kathy starts out to Crystal saying, “I heard that you had an issue with somebody saying ‘I don’t see color.’” Kathy said that she grew up with Michael Jackson, and he used to say that, and she said it to him in return. Garcelle wants Kathy to move on from meaning “I love everybody” to actually seeing color. Garcelle wants Kathy to see her for who she is, and “my color shows up before my intelligence, before my fashion. That shows up before anything when I walk into the room. And I need you to see that.” Kyle jumps in to say that Kathy sees everyone as equal. And Garcelle says, “We’re not.” Kathy is visibly upset. The idea of being equal and the reality of being equal are different. Garcelle and Crystal share their experiences.

Then Dorit. Oh, Dorit. Stop talking. She talks about how her children have important people in their lives who are x, y, z. And Garcelle asks if, “the brown people only help at their house.” Dorit says no. Most people probably would view P. K. Kemsley and Dorit as open to many kinds of people. Boy George has an alternate lifestyle and persona and practically lives with them. But this conversation is really cringy as Dorit attempts to “explain.”

After dinner, Kyle asks each person to carry her plate to the kitchen to put it in the dishwasher, and Dorit is upset. She’s “dressed for dinner, not for dishes.” Dorit wants Kyle to have “help.” Garcelle and Crystal head back to their hotel. The rest of the ladies hang around on the couch again. And Kyle tells the group that Lisa told them about Harry Hamlin’s acrylic nails. Lisa says that he has acrylics on one hand because he doesn’t like to use a pick to play guitar. Lisa texts Harry to send a picture and he does. 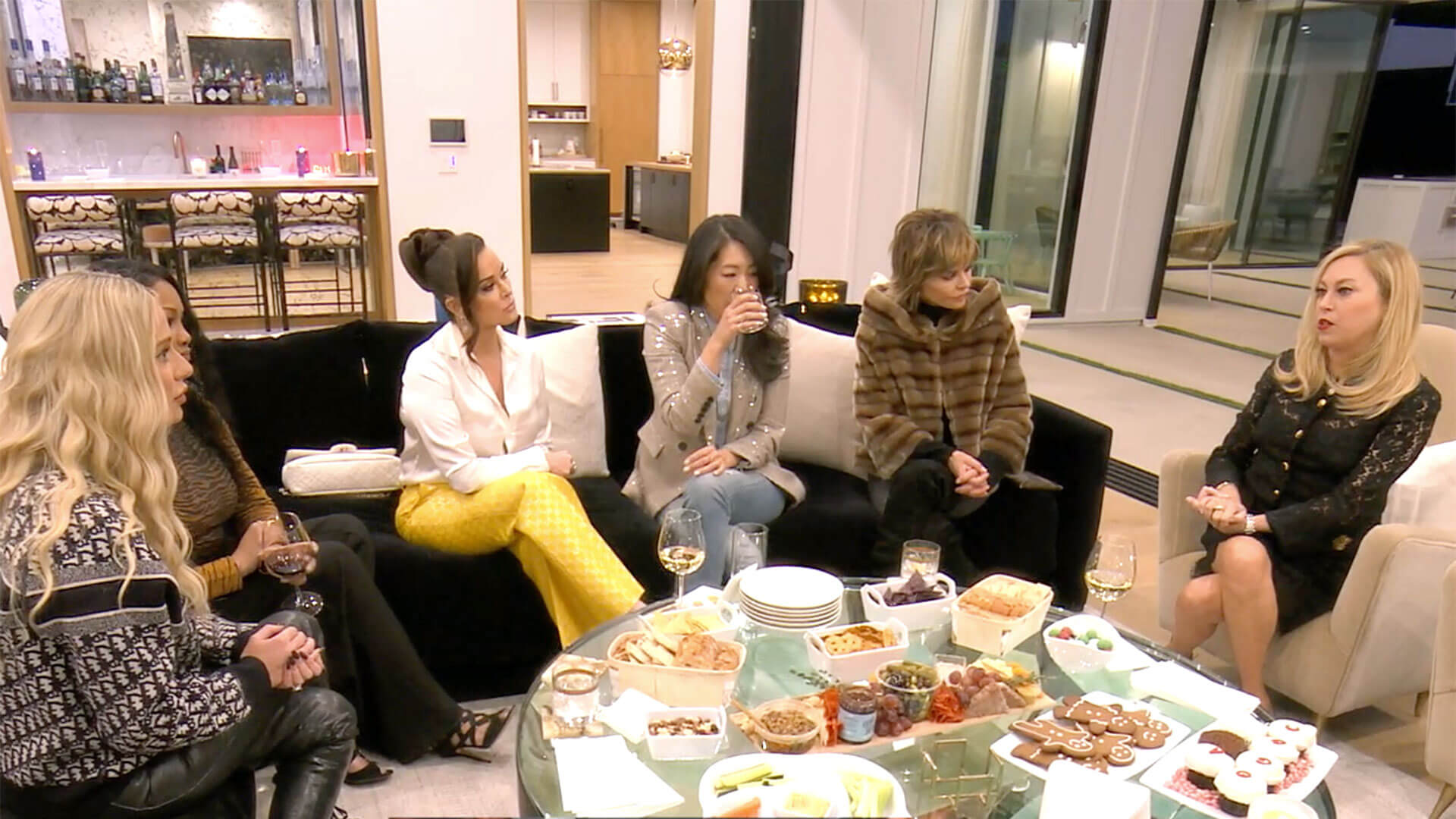 The next morning, Lisa and her thirtieth bucket hat show up in the kitchen to find coffee. What’s with those hats? Kyle is looking at more headlines about Tom and Erika (Dec 17, 2020). Crystal and Garcelle are seeing it, also, in the hotel. There is an in-depth exposé by the Los Angeles Times. The news has broken that Tom is accused of misappropriating money (diverting assets) from orphans, cancer victims, burn victims, and his lavish lifestyle has been allegedly supported by that money. The article has a quotation from an affidavit that states, “very substantial sums, denominated as ‘loans’ were going from firm accounts to EJ Global LLC, …”. The sum of $20 million dollars was allegedly moved into Erika Jayne’s companies. The article also claims that Tom admitted that he doesn’t have any money.

Sutton joins the conversation. She read the article, also. Sutton says, “They used the word, Ponzi scheme.” Dorit joins the ladies, and everyone is concerned that this is a bigger issue that has gone on a lot longer than they were told by Erika. They surmise that Erika left the day before because she had a “heads up” that the exposé was coming out. Kyle says that “this article is implying that Erika was complicit and knew everything.” Sutton thinks that Erika couldn’t have been running a business and not know. Kyle says, “If I had $20 million in my account, whether it was from 20 years or 1 year, it would be very strange, but I also know where my homes are.” Lisa thinks Erika likely didn’t know anything that was going on, given how and who Tom was. Dorit says that the picture being painted is that the money meant for victims was used to support their lavish lifestyle. Then a series of clips are shown about two private jets, expensive jewelry, shoes, cars, and the bragging of Erika about Tom and their lifestyle. Sutton questions if the group may have been “slightly duped” by the lies. Given all of the recent revelations, the ladies are concerned about what else is hidden. 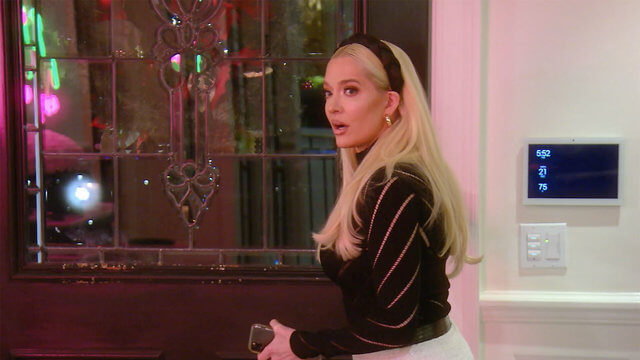 Back in Beverly Hills, everyone settles back into daily life. P.K. and Boy George Facetime with Dorit about the situation with Erika. P.K. is telling Dorit that she can’t support Erika unless Erika says “she didn’t know.” Kyle talks to Dorit. They can’t put the pieces together. Sutton wants to have a meeting with the group and without Erika. Dorit is hosting the summit. As the ladies arrive, they are discussing the newest leaked texts by Erika (updated December 19, 2020) where Tom is having an affair. Garcelle is telling the ladies that Erika denied a short time ago that Tom was having an affair. Sutton says that she has some reservations about what was said in La Quinta. Sutton thinks that all of the ladies are now in a bad spot because they have heard stories that don’t add up. Sutton is worried to be around Erika during all of this.

Next time, the discussion continues about what Erika knew and when she knew it. The ladies celebrate Christmas. And they finally gather with Erika for the first time since the trip to the desert. Is anyone surprised by the reactions to what was revealed in this episode? From what’s been released in the press over the last 8 months, it’s about to get messier.