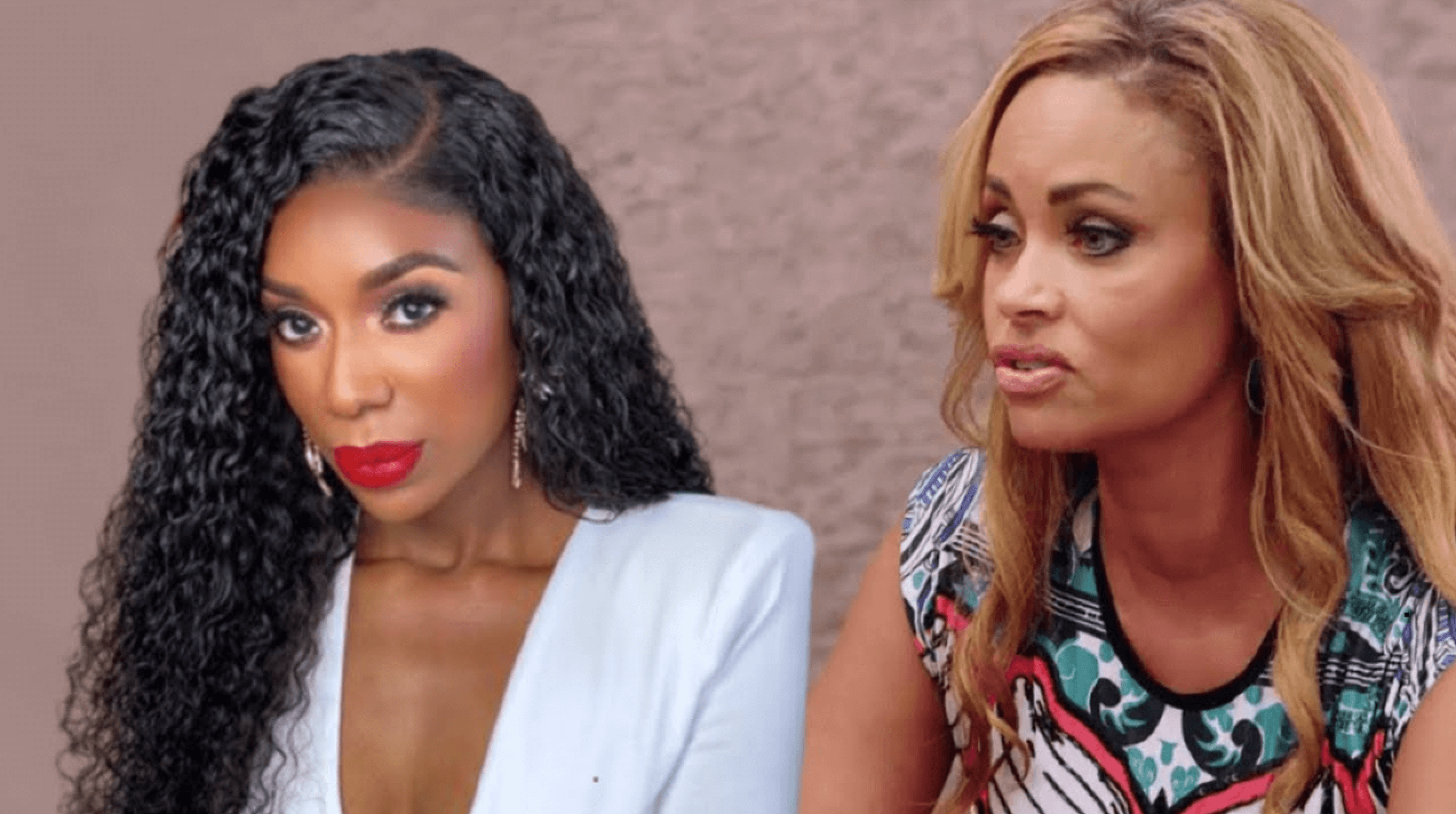 Wendy Osefo accused Gizelle Bryant of “body shaming” and used social media to bash her co-star for “attacking” her family. The Real Housewives of Potomac star took to Twitter to slam her castmate during Sunday’s episode, sounding off about Gizelle’s bombshell comments about her marriage.

Gizelle raised an eyebrow at Wendy’s sexpot makeover during the August 8 episode, noting that their castmate is not “the Wendy they met.” She then remarked to Ashley Darby that Wendy’s behavior might be a reaction to cheating rumors circulating about her husband, Eddie Osefo. 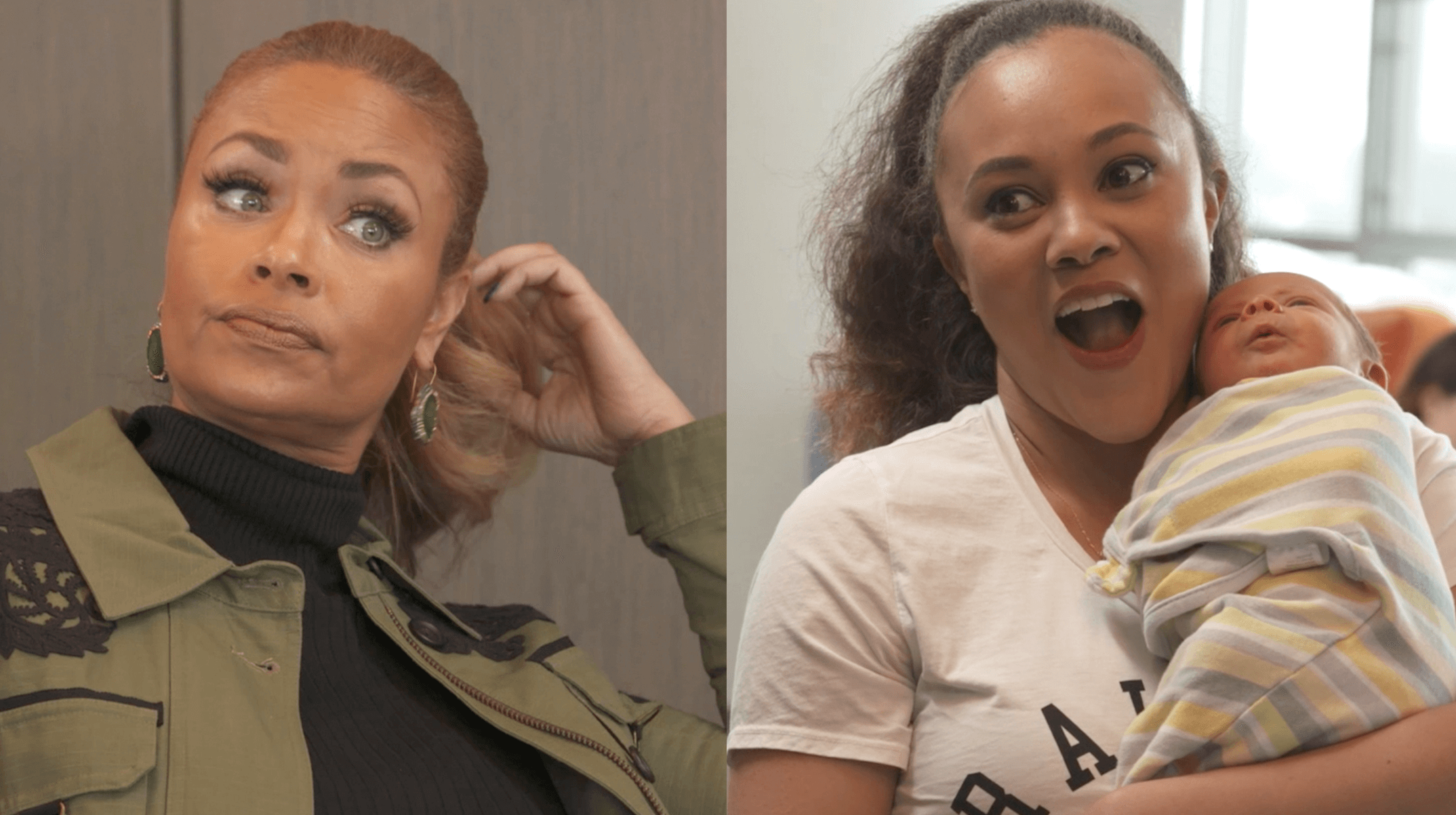 “We all saw you [Gizelle] bring up the false rumors in this scene,” Wendy fired. “You were so PRESSED to make sure it made air, you said it AGAIN. Girl you [are] not a friend nor were you concerned. You just have a history of attacking marriages! I pray you find happiness in [your] own life.”

We all saw you @GizelleBryant bring up the false rumors in this scene. You were so PRESSED to make sure it made air, you said it AGAIN. Girl you r not a friend nor were you concerned. You just have a history of attacking marriages! I pray you find happiness in ur own life. #RHOP pic.twitter.com/V5O48XcoRp

Wendy then agreed with a fan who accused Gizelle of reacting to Wendy’s risqué pajama party look in order to deliberately repeat the rumor.

“BINGO! She had every intent of attacking my family this season,” Wendy replied. “But when she first said it(when she wore the yellow) she had no rationale. Then after the pajama party she had ammunition to say my dressing was linked to the rumor. She think she slick. But I peep her game!” 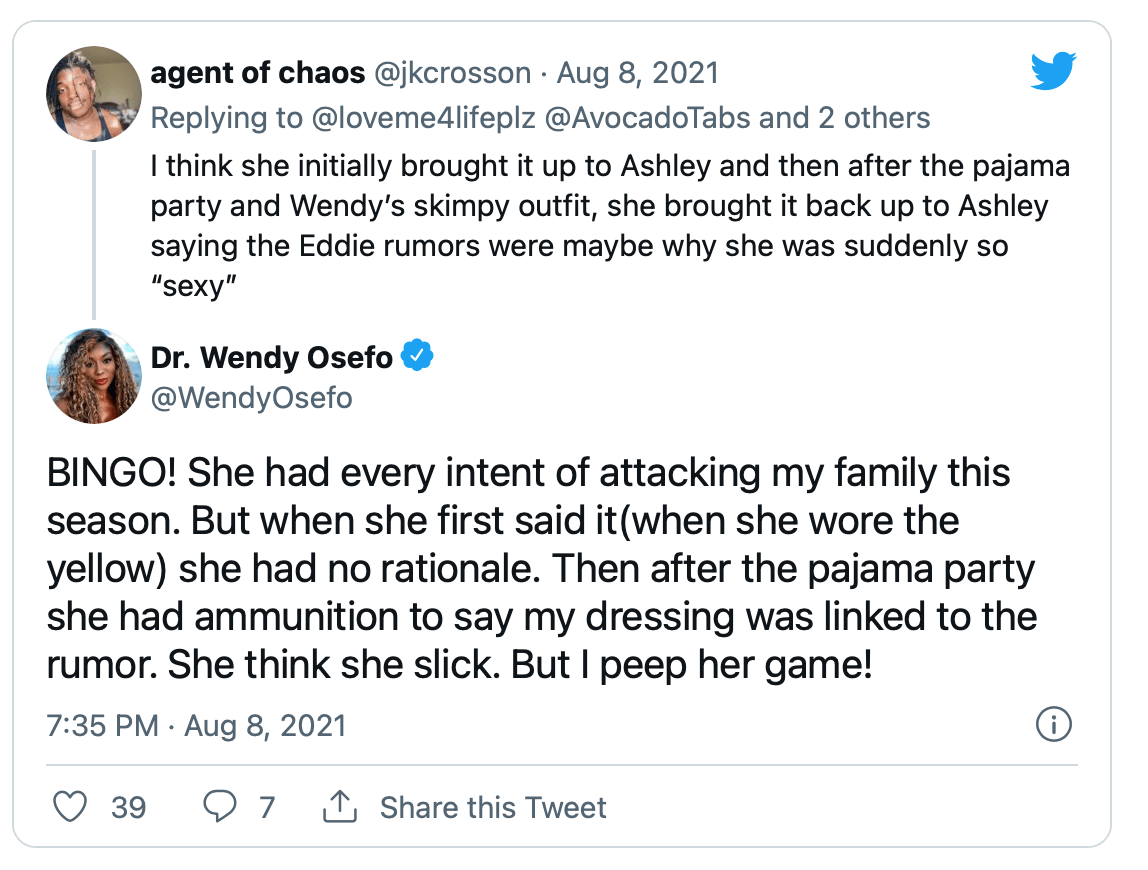 Wendy called out Gizelle for “body shaming,” sharing a series of outfits she wore during Season 5—before her plastic surgery.

“So, when I wore these outfits last year during Season [five] of [RHOP] NO ONE had a problem with it or questioned me… I guess the REAL issue is that I got my boobs done, not my outfit choices,” she said. “This negative narrative surrounding my appearance is BODY SHAMING at its finest. SMH.” 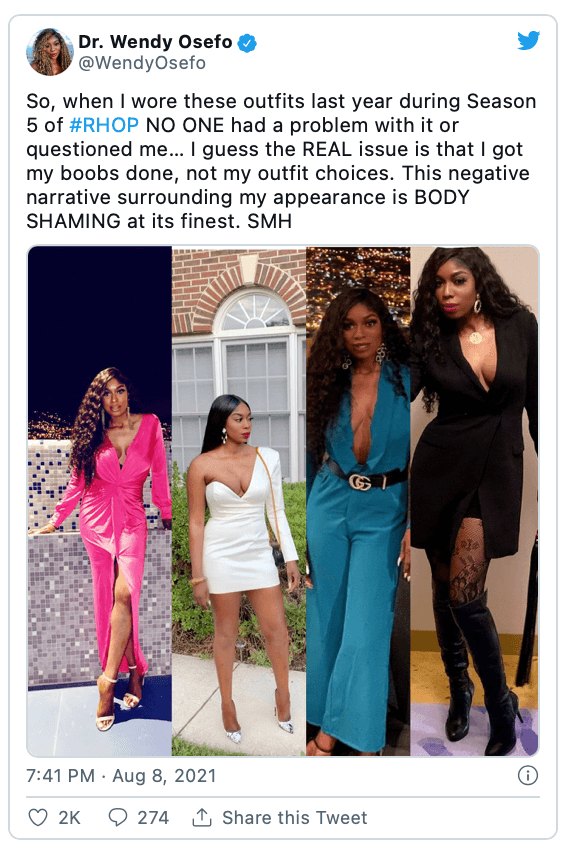 “I didn’t know there was a dress code for a girls trip with GROWN women,” Wendy quipped. “Anyway, my outfit is from [Zara]and I think it’s cute.”

Wendy shifted her aim to a fan who called out her seemingly lackluster business sense.

“As a 4 degree professor, how do you NOT know you need a business plan? Girl Stop it,” a viewer commented.

“Because my degree is in political science and government NOT business administration,” Wendy responded. “My husband has an MBA I don’t. Let’s normalize being honest when we don’t know something. Even with 4 degrees it is okay to ask questions. No one knows everything.” 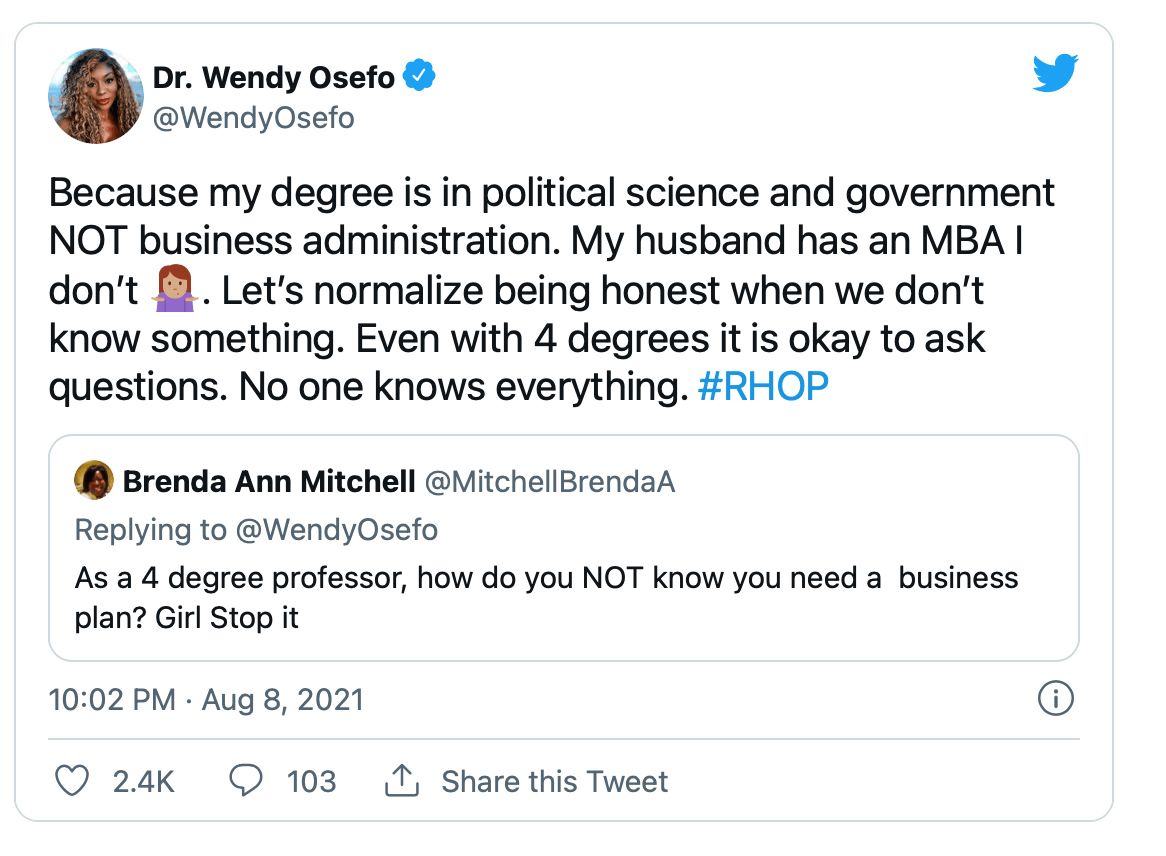 Karen Huger addressed Gizelle’s comments about Wendy’s husband and updated fans on their ongoing feud, in a recent interview.

“Rumors are always swirling around in this group and I just refuse to be one to [entertain it],” Karen told E! News on August 5. “I don’t support it and I go directly to the source. I talked to Wendy, she says it’s not true. That’s all I need to know. I’m not going to bring it up to the group for drama or extra punch. I am an extra punch all by myself. So I just think it’s a little cruel and unnecessary.”

“But Wendy handles her own,” the RHOP star continued. “And I certainly support she and Eddie as a couple. I’m so happy for them.”

Fans know that Karen and Gizelle have swapped nasty barbs in previous episodes. Karen dished an update on where the duo stands today.

“I’m always hopeful but unfortunately Gizelle is slow to change,” Karen noted. “And I am just in a point in my life where I am at acceptance of those and the actions they bring. I’m always hopeful that she will get on the bandwagon because all of the ladies, we are having a great time and I am friends with everyone.”

“Even though Robyn [Dixon] is her ride or die and I have much respect for that, we have our moments because of her commitment to Gizelle regardless of what she says or does,” the reality star said. “I’m still ok with Robyn, and Mia [Thornton] Wendy, Ashley [Darby], and Candiace [Dillard Bassett]. We are just having a great time. I’m just hoping that Gizelle will get on the bandwagon with the ladies and change.” 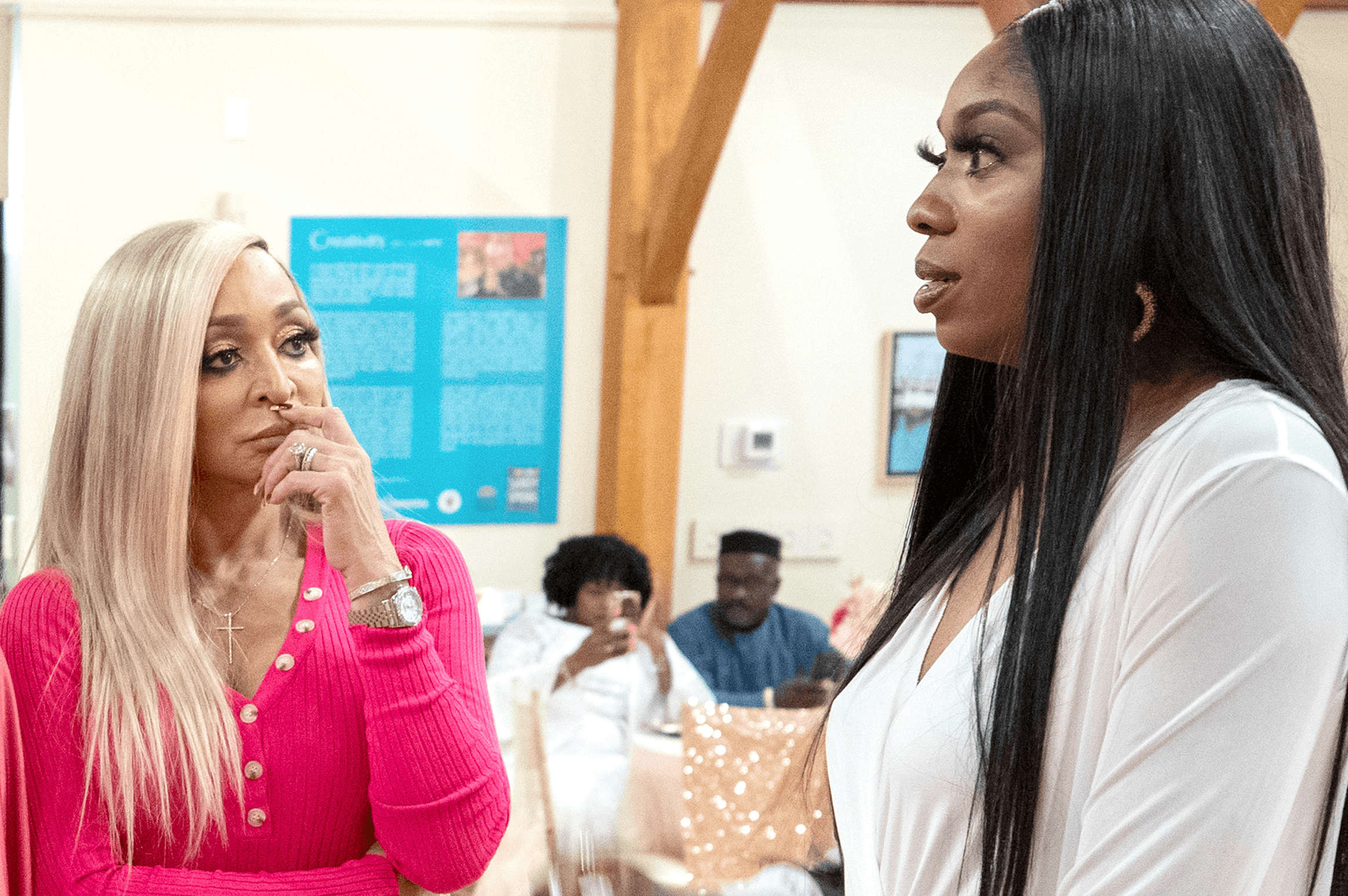 Karen teased that the ladies were over Gizelle’s alleged bullying act.

“Change is going to be required because these women are dynamic and they’re not taking the bullying anymore and they don’t have to,” Karen declared. “So she’ll have to come correct. Am I hopeful about our relationship? I always have a small amount of hope for us because we were good in the day.”