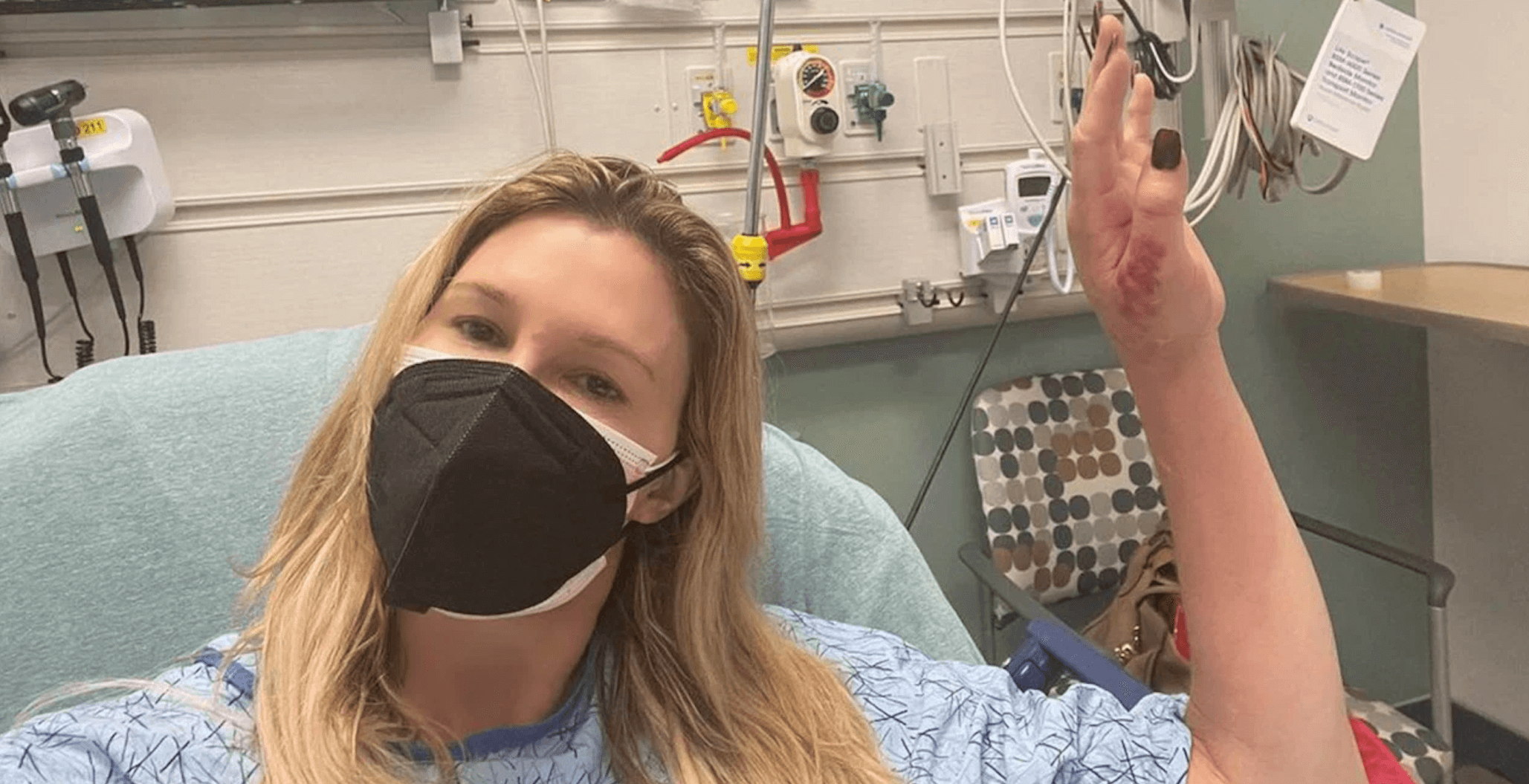 Brandi Glanville has been hospitalized with a mysterious infection. The Real Housewives of Beverly Hills alum took to Instagram on Wednesday to explain that doctors were trying to determine what caused her hand to become swollen and inflamed. She added that doctors believed that it was likely an allergic reaction to an animal bite.

Page Six reported that the former reality star spent the night in the hospital because the doctors “don’t know what is causing the infection.”

“Her hand and arm are blown like a balloon,” a rep for ex Bravo star told the outlet. “They are running more tests.”

Brandi reiterated the news on her social media accounts. 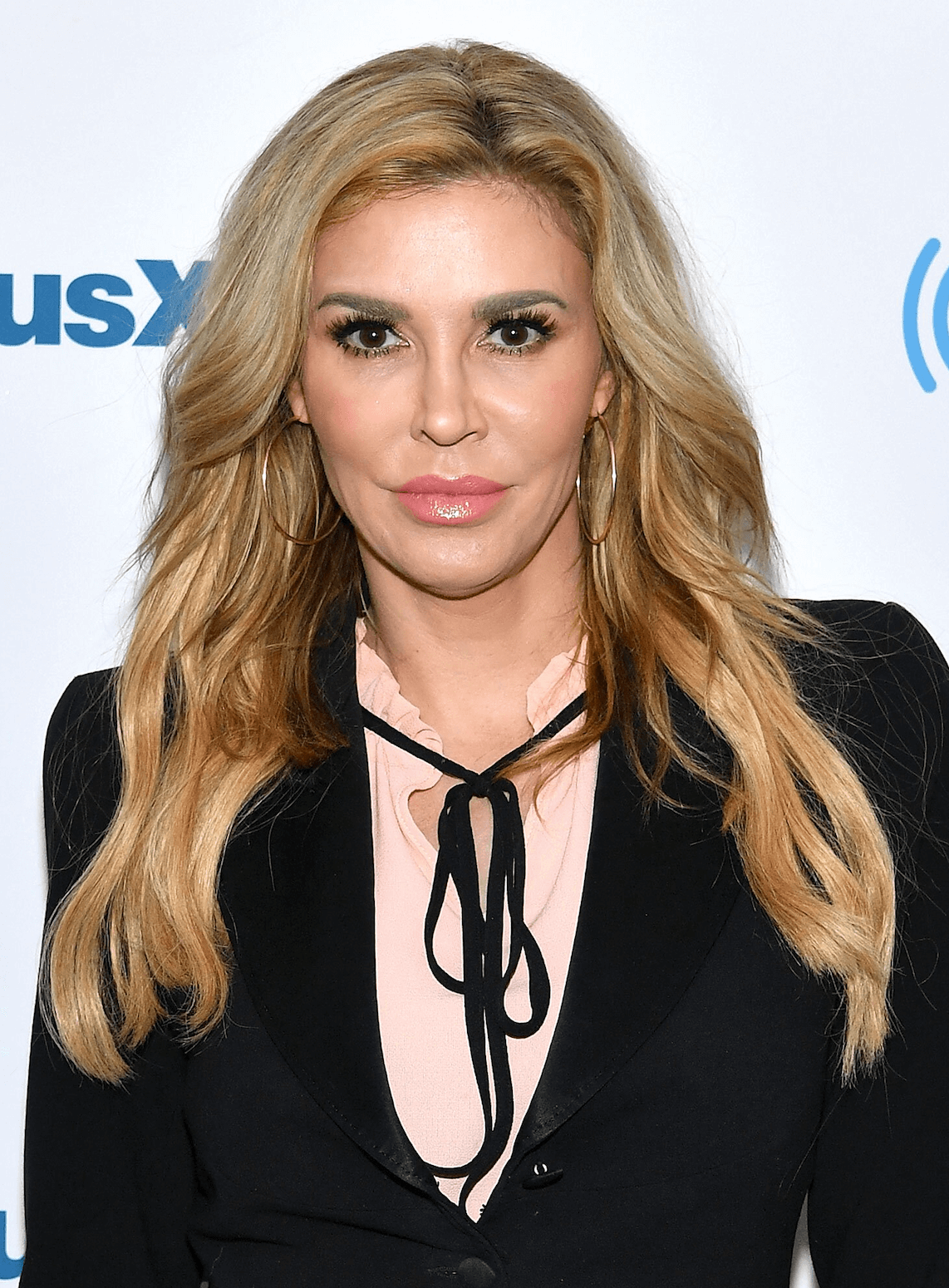 “We are not exactly sure what we are dealing with,” she captioned a hospital bed selfie. “We believe it may be an infected spider bite.”

Brandi first revealed her swollen hand on Tuesday, writing in the caption—“I think I got bit by something in the night!:/I have so much to do today I’m not sure I can go to the doctor.”

Brandi shared her hesitancy to seek professional help due to a busy day, but many fans urged her to seek medical attention immediately. 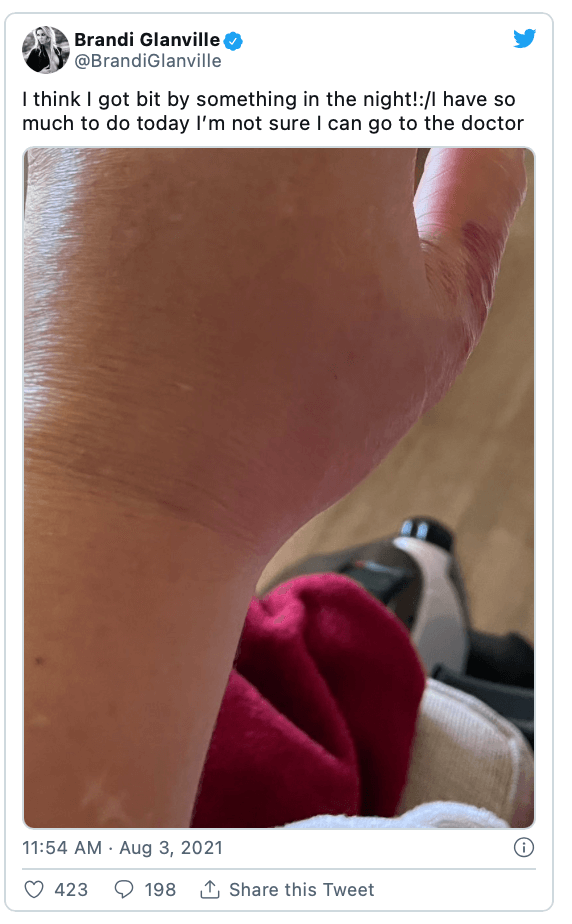 Brandi later confirmed on Twitter that she had gone to the ER, but was not happy to be stuck in the hospital.

“My little piggy hoofer has an infected bite of some kind (not human) spending my day at ER I wanted to leave but they said I could lose a limb so I’m chilling -ON A TUESDAY!!!!” she wrote in another tweet, hours later. 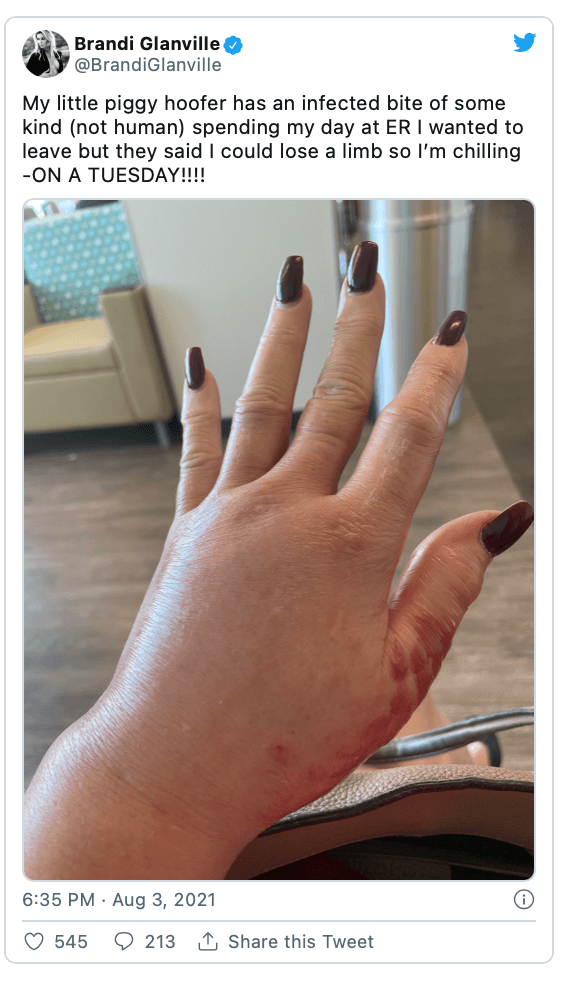 She shared another pic on her Instagram Stories later that day, telling followers that the swelling was “finally starting to go down.”

Brandi kept her followers in the loop, giving an update on Wednesday.

“Hey guys, yes, I was admitted to the hospital yesterday and I have amazing first responders taking care of me!” Brandi wrote on Instagram, captioning a photo snapped in her hospital bed. 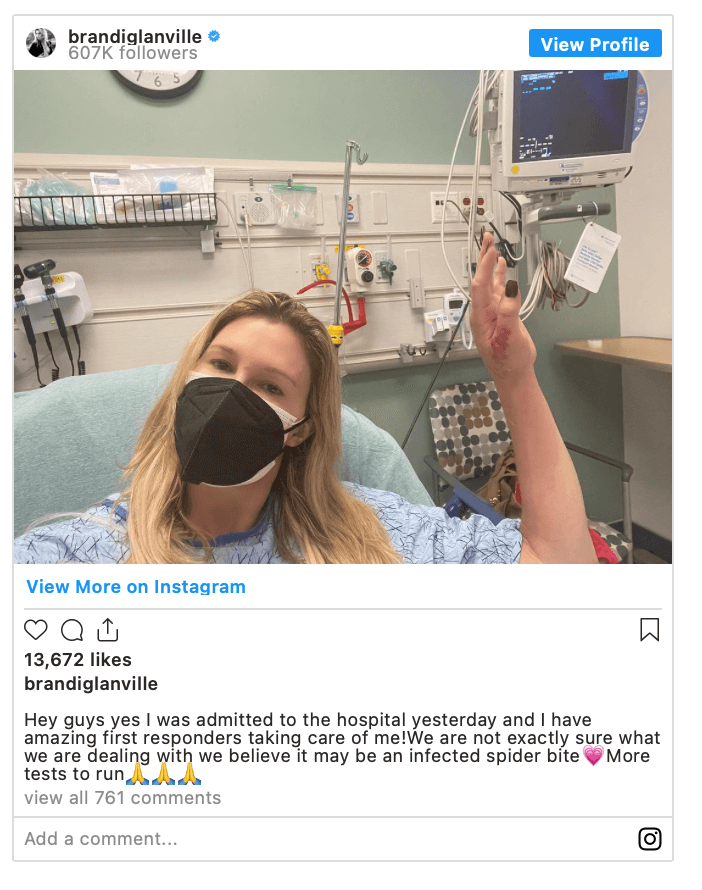 Brandi revealed that she had suffered another health scare earlier this year after outlets slammed her appearance after an Instagram Live session.

“So this happened to me in December. Second degree burns all over my face from an accident with a psoriasis light I am still healing,” Brandi tweeted, in March.

The RHOBH alum responded to a fan who asked about her health, writing—”I’m OK but you know it happened in December. I’m still swollen and having people attack my looks just makes me feel like I never wanna leave my house and I just want to cry.”

“My retinas were burned my eyelashes burned off I couldn’t open my eyes [for] three days the light was so painful,” the mom of two explained.

“Completely my fault. It was suppose to help the psoriasis that was overtaking my face from stress,” Brandi said.