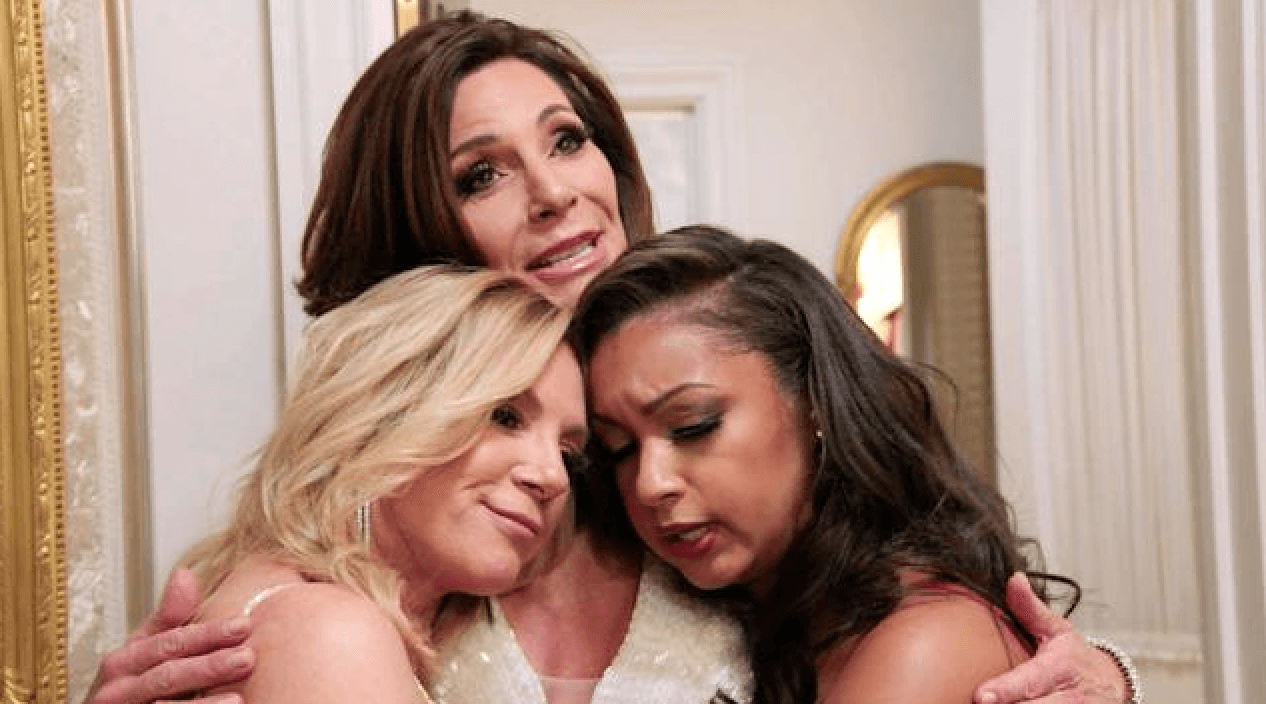 This week on The Real Housewives of New York City, Sonja Morgan and Ramona Singer (via Hank) have different accounts of the goings-on with Dylan after the Ramonja party. And there is a promo of Eboni hosting another event. Will Eboni K. Williams’ hosting of Black Shabbat be different than her Harlem Nights event? Will we see Heather Thomson this week?

Luann de Lesseps meets up with Sonja for some after-party gossip. Sonja starts out the conversation by saying, “I’m so tired of being so hot.” Sonja is about to go on a date from the matchmaker, but she’s not afraid to go with Mr. Right Now first. Luann asks if they had sex. Sonja says, “Did I? I can hardly walk today.” Ramona shows up at the restaurant to find out about the night before.

The conversation turns to the Black Shabbat party. Eboni was going to bring her new boyfriend of a few months, but Sonja says that her boyfriend broke it off because Eboni isn’t Jewish. Sonja says, “He wants her to be Jewish, but he doesn’t want her to convert.” Then Ramona, the Talmud Scholar, says, “Therefore he will only marry a girl who’s truly truly Jewish.” Sonja spilled the tea to Ramona and Luann, but then felt bad and immediately called Eboni to tell her. Ramona and Luann offer Eboni support. They don’t understand why someone would date Eboni after being friends with her, knowing that she wasn’t Jewish. Eboni lets it roll off her, telling the girls not to worry.

Meanwhile, in Leah McSweeney’s apartment, she’s opening take-out and offers the dog falafel. Pita Chip, anyone? Leah’s brother, Daniel McSweeney, and sister, Sara McSweeney, arrive. Daniel brings a gift for Keir from their grandmother—her rosary. Sara says she’s nauseous and possibly pregnant. They start talking about how their mother doesn’t like Sara’s Fidel Castro jumpsuit but probably wouldn’t like Leah’s sheer top. Daniel thinks their mother would be happy with something in between their two extreme styles. Leah says their mother isn’t happy about her conversion to Judaism. Leah gushes about the rabbi helping with her conversion, but her siblings tease her that she is infatuated with the rabbi like Carmella and the priest in The Sopranos.

At Sonja’s house, her assistant and her intern, Emma and Emily, are apparently listening to Sonja’s safety talk. She is telling them that no one is getting into her home. “I have an alarm system. I have monoxide detectors. I have fire alarms. I have cameras. And we have the poodle on high alert.” Sonja’s healer, Aleta St. James, arrives. At the séance, Sonja was told by the medium to get real professional help, but this is Sonja. Sonja recounts what happened in the séance. Sonja was not only rejected and abandoned by her own father but she was rejected by her step-father as well. The healer tells Sonja that she’s creating a pattern of “men abandon you” from her subconscious. The healer wants to “go back” and take away the trauma.

Eboni has her DNA results envelope delivered. Eboni is feeling the weight of knowing whether or not Ashley is her sister and she gets a new family or if she goes back to being “a fatherless child.” She calls Ashley to tell her that the DNA tests confirm that they are not sisters. Ashley is visibly upset. Eboni reassures Ashley that she does want a relationship, but Eboni’s search for her father now is starting over.

At Sonja’s house, Will, one of Sonja’s former interns, is helping her get dressed for a business meeting with Gaurav, her business partner and the CEO of Sonja Morgan Brands. Sonja thinks that before Century 21 went under, her clothing line was a hit seller. Sonja is taking Eboni’s advice to “see the books.”  Gaurav and Laura, the VP of Sonja Morgan brands, show up to a luncheon. Ramona is invited, also. Gaurav tells Sonja that they lost a lot of money with the Century 21 deal, but they will find something else.

Ramona comes in hard, outlining her experience in the fashion business. Gaurav says they are selling, on average, $50,000 per month. Ramona talks numbers. Gaurav is vague. Ramona says that there should be enough money for Sonja to get paid something, anything. Then Laura says that Sonja has uncashed checks. Sonja says she received a $2000 check, but Laura says it was a $10,000 check that was uncashed. Gaurav has a spreadsheet on his phone that he says are “Sonja royalty calculations.” Zooming in on the screen, the Grand Total is $1,526,027.44. The “net amount” for Sonja must be much lower than that. Ramona says the money must still be there if Sonja hasn’t used it. Gaurav says, “Only money paid from there is lawyers for the distribution of brands.” Ramona asked how much of the $80,000 was paid to the lawyers. Gaurav says, “$60,000.” Sonja and Ramona get up, and Sonja gets her purse (in her own home), and they demand to see more than the tax forms. They want “the books.”

Luann’s team is setting up for her Christmas music video. Hair, makeup, caviar, oh my! Luann’s producer and composer, Billy Stritch, shows up at the filming. He suggests that they film a Christmas album in the summer. Leah picks up Eboni for the trip to the video shoot. Eboni shares that Ashley is not her sister. Eboni tells Leah that she’s going to talk to a geneticist (maybe she means a genetic genealogist) to help her find her dad.

Luann is trying to film the opening to her video, but Ramona is telling people what to do and spilling champagne. Leah shows up with her dog, and Luann is not happy about it. Ramona talks to Billy about how she never gets drunk, but Leah and Billy laugh about that as Ramona walks away. Eboni and Luann bond over being single again. Luann retells her story about Garth… the press… taking a break… and they bond with Ramona about how men run for the hills at the sight of Page 6.

As Leah and her dog are filming her one line of the video, Luann and Ramona talk about how Sonja is telling two different stories about what happened with Dylan after the Ramonja birthday party. Ramona says that Sonja went back to the hotel room with Dylan and Dylan’s girlfriend. The video was posted online showing three of them in the hotel. Dylan called Hank that night to come to get drunk, passed out Sonja off of his bed. Luann and Ramona are trying to figure out why Sonja is making up stories. Luann is frustrated that Sonja seemed happy to find out that Luann and Garth were taking a break. Luann wants Sonja to be her friend, not just when she’s drunk, and stop taking digs when she’s sober.

It’s Ramona’s turn to videotape her one line, and she is yelling again. Sonja, Leah, Luann, and Eboni go off to the hallway. Luann tells the girls that the song won’t be released for Christmas for 2020 so they will have time for all of that paperwork. It’s Eboni’s turn. Her dress is gorgeous. She did a great job on the video.

The girls grill Sonja about the caviar that she took to the hotel, but she forgot and left it there. She’s lying about eating it with Dylan. Luann and Ramona are giggling at Sonja’s continual storytelling. Sonja goes all in and says, “He was a very good lover.” Luann tries to bring up that Dylan has a girlfriend. “I think she was there in the room with you.” Sonja repeats that “he was a very good lover.” Sonja goes into another room with Leah and closes the door.

Sonja and Leah continue the discussion about she has the caviar, he has the tequila. Sonja says that she’s in the room with Dylan and his girlfriend comes out of the bathroom. Sonja continues to say that she got what she went there to get from Dylan. Now the group is going to film the chorus of the song. Ramona’s on the phone. It’s like herding cats. They finally do the last shots of the video.

Next time, Sonja has her first date from the matchmaker. Ramona is mentored in real estate by Michael Lorber. Leah is exposed to Covid and has to quarantine instead of doing Black Shabbat dinner with Eboni. And like all dinners ever in the Housewives franchise, Black Shabbat is no different.