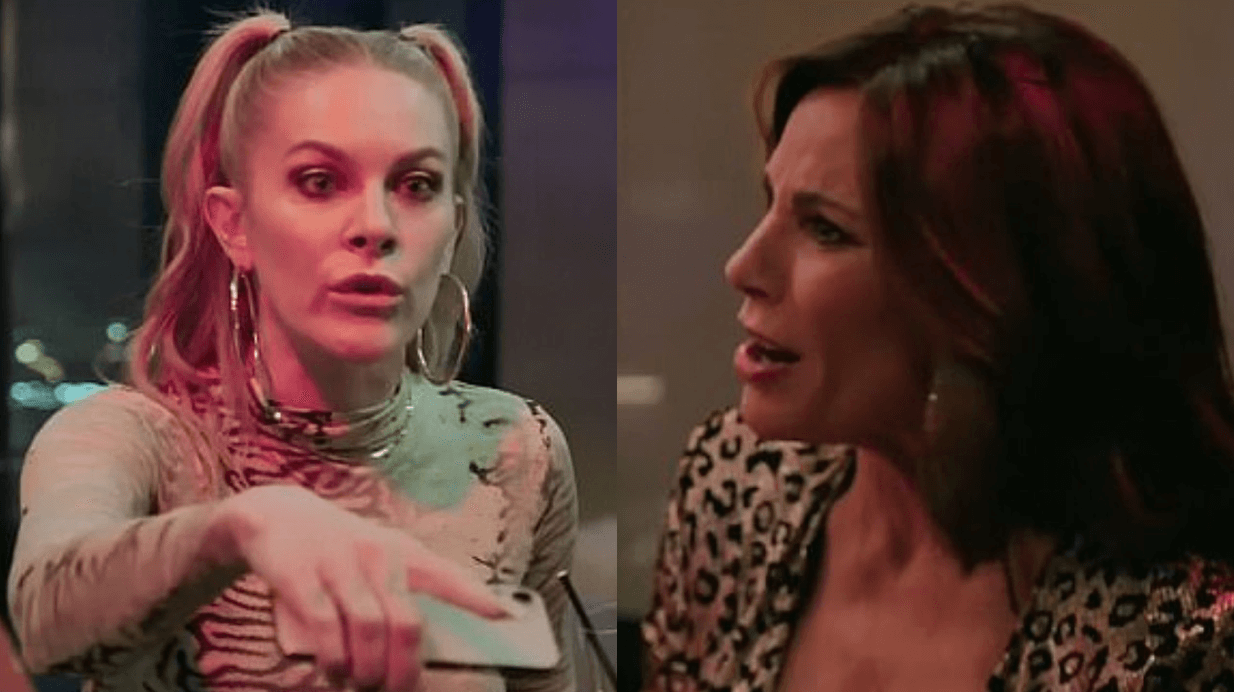 This week, after their trip to Salem, what could go wrong when Leah McSweeney and Luann de Lesseps plan a combined birthday party for Ramona Singer and Sonja Morgan? And Eboni K. Williams searches for her birth father. This could be the best episode ever if Martin the Boxing Instructor gets some real airtime.

Luann is trying to build her friendship with Ramona and gets her a pastry with a candle on it for her birthday. Luann offers to host a joint birthday party for Ramona and Sonja (not a 50-girlfriends-party, but a small gathering.)

Sonja and Eboni meet at Martin’s studio. The psychic last week did suggest that Sonja ditch the healer and get some real professional help. Martin is going to help her be less sensitive, or as he says, “insensitive.”

Ramona and Luann discuss how concerned they are for Sonja. Ramona says that so much came out for her at the séance. And Ramona fears that Sonja is on a similar self-destructive path as her own brother.

Eboni asks Sonja about her mom and dad’s relationship. Sonja says, “They really had a love story. They really loved each other. The pressure between the two families was huge.” She goes on to say that her parents broke up and it was a long time until she saw her dad. Sonja says her dad was “a player.” Martin says her dad was “a dick.” Martin gives her some advice about letting things go telling Sonja that she needed that experience from then to bring to the war she’s fighting now. Sonja says in her production interview that she’s glad her father matured “on the other side” and came to the séance.

Eboni says to Sonja that she realized at the séance, “Your daddy broke your heart.” Eboni admits that she has brokenheartedness, too. Eboni has been talking to her purported half-sister. They are going to both do a blood test and get the results together to see if they share a father. Regardless if they are biologically related, Eboni wants a continued relationship with Ashley.

Luann mentions to Ramona that she just got a piano. She and her musical director, Billy Stritch, are writing an original Christmas song. Luann wants each of the ladies to sing a line of the Christmas song and proceeds of the sale will go to charity.

Eboni Facetimes Ashley. They both talk about finding out that Kenneth, their possible shared father, passed. Eboni says that she thought she would be heartbroken, but it didn’t phase her. She was looking beyond him to the other family members she would gain. Ashley says that she had such a lack of relationship with her father, Kenneth, that it didn’t hurt. She adds, “But, I thought it should’ve hurt.” Eboni says that she blocked him out after years of disappointment because it felt better to have no relationship than to feel abandoned. Both Ashley and Eboni talk about how they end romantic relationships first instead of having the men end them.

Luann and Leah meet at a party venue to plan the Sonja/Ramona joint birthday party. They decide on cake and male dancers (not strippers). Keeping it classy. It seems like that’s it for the party planning. They seem to leave the rest to the professionals. They discuss that Luann’s relationship with Garth hit the press, and now they are “laying low.” In Luann’s world, that usually is code for the beginning of the end to her relationship. She tells Leah that she and Garth are “taking a break.”

In Luann’s apartment, Billy and Brian, the sound engineers, are setting up for the invasion of the non-singers. First up, the Singer non-singer. Ramona is already hitting on Brian. And then there is autotune. Sonja sings the line differently each time. She wants to make up new lyrics. Then it’s Eboni’s turn. Then Leah shows up ambivalent because she still doesn’t have a contract. She wants to know who owns the song and how does it get distributed. Billy puts on a lawyer-ish hat to tell Leah that he doesn’t think she has any liability at all. The song is original and is owned by Billy, his co-writer, and Luann. The song doesn’t have any pieces that are picked up from any other works. Luann’s getting worked up that Leah is asking about the song and where the money is going. Leah decides to record the line, as a donation, on the advice from two non-lawyers but financially interested parties.

The night of the “Ramonja Party” has arrived. The group is meeting at Dear Irving on Hudson. Hank is there. Now we know who was party planning! Sonja immediately tells Hank that she’s not drinking because the girls are all “wagging their finger.” Sonja is still blaming “that red wine” for what happened in Salem. As the ladies arrive, Sonja scoots closer Kurt the Nude Model from the art party at Luann’s Hampton’s house. Leah and Eboni tell Bershan Shaw about Kurt’s beautiful penis. Then Luann parades in a man named Dylan. Ramona says she knows Dylan “through people.” This party must be called— The Real Housewives of New York City with a clothed model, a nude model, and all of Kurt’s friends.

Luann has a surprise for the evening, aside from the parade of hookups past, and it’s two male strippers (but let’s not call them that.) Leah swaps out for Ramona. Then Leah lap dances on the stripper. Luann gives a toast, and Sonja starts drinking. Ramona is enticing Will, telling him about the views from her apartment. Bershan is asking Kurt the Nude Model if things ever get out of hand when he’s modeling. Kurt says, “almost all the time, no touching.” The group has an odd discussion about balls and vulvas. And Hank tries to bring the discussion “Back to Kurt’s penis. Back to Kurt’s penis.”

Eboni announces that next week she is “doing an event” called Black Shabbat. Eboni tries to talk about the party without Bershan in the room, but that didn’t happen. Bershan joins in the conversation. Then Eboni tries to explain that her friend is hosting it (but she’s not black). And Eboni is inviting her black friends (and the ladies). Bershan isn’t saying anything. Ramona asks, “Why can’t you just say that you are having some people over?” Eboni says that she’s calling it Black Shabbat because “we share some things culturally.” Ramona feels the lecture coming and wants to remind everyone that it’s her birthday. Bershan asks if she can come, and Eboni says she’s limited in the number of invitations because of Covid. Eboni is only inviting the “black people she has been to Israel with.” So no, Bershan, you are not invited to Black Shabbat.

Leah brings up at the party her concerns about the song. Then Leah brings up last year’s argument where Luann allegedly didn’t pay Sonja for her involvement in Luann’s cabaret show. Eboni, the lawyer, steps in to tell Luann that Leah is just trying to protect herself. Eboni figured that it was for charity, and they would sign paperwork later. Leah says she just wants to know how the money is going to be donated to charity and for how long.

Hank tries to rally the attendees for the cake reveal. Ramona is concerned that Leah was in charge of the cake. And, just as suspected, the cake is a giant penis with a giant vagina. It would have been a better surprise if Mario Singer brought out the cake! Leah bit the end off of it. Ramona tastes it. Ramona says good night to the group. Ramona texts her address to Will as she’s leaving. Sonja decides to go have a drink with Dylan. Sounds like it was a good party, and both birthday girls are leaving with gifts!

Next time, Luann asks Sonja how it was with Dylan after the party and then Ramona tells a different story about what happened between Sonja and Dylan. Eboni has news about the DNA tests. Ramona confronts Sonja’s business partners. And, the ladies film the music video for Luann’s Christmas song.