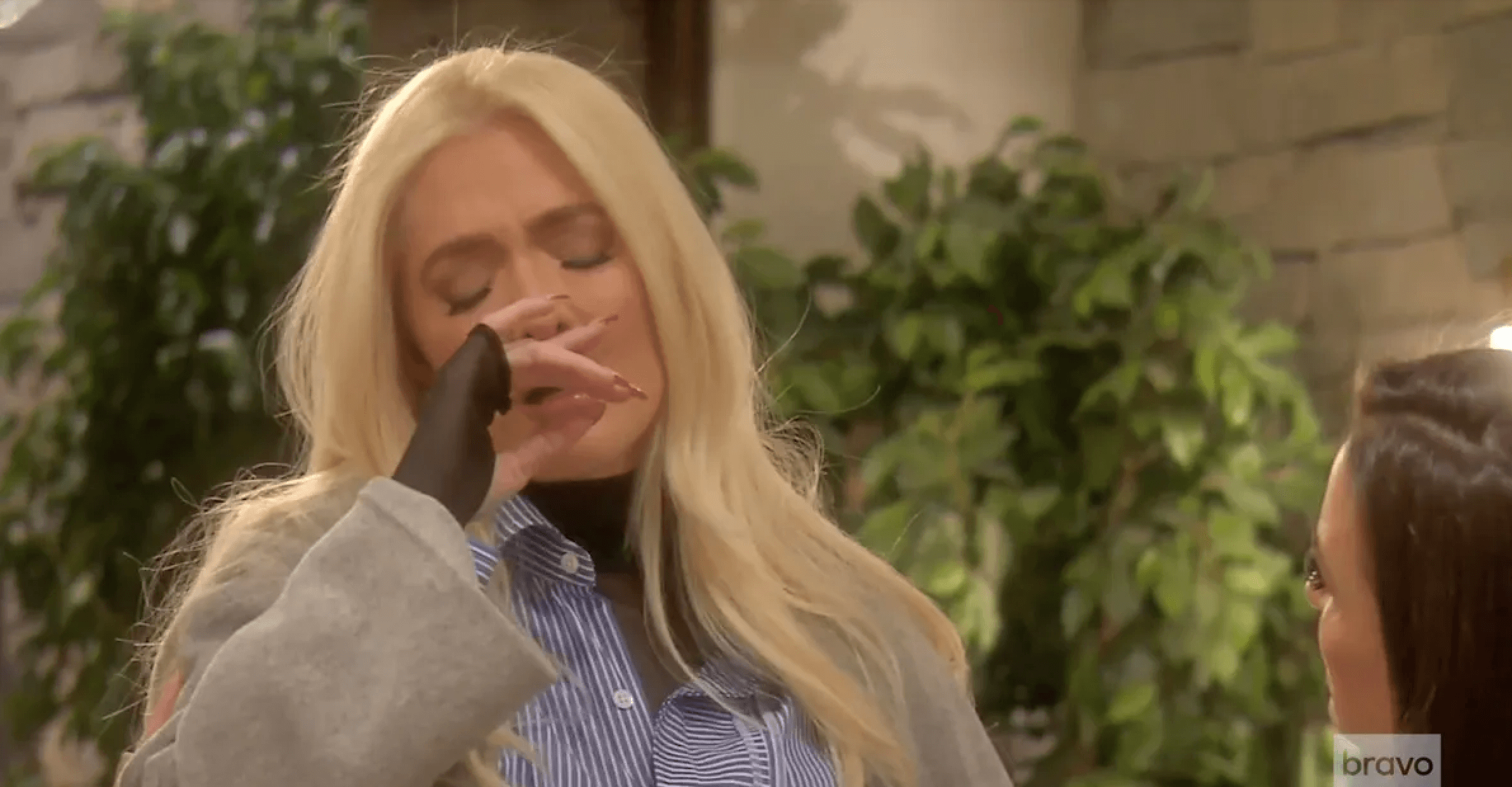 This week on The Real Housewives of Beverly Hills, Kyle Richards is recovered from Coronavirus and invites the ladies to her home in LaQuinta. More news hits about Erika Girardi and her divorce from Tom Girardi. Erika has some interesting things to say this week, and some might think she delivers another great “performance.”

As the ladies pack for the trip to the desert, Lisa Rinna throws a ton of clothes in a bag and calls it a day. Dorit Kemsley’s son, Jagger, asks her why she has so much stuff for just two days. Sutton Stracke hasn’t packed at all. Erika is at her “clubhouse”/office, packing it up and letting that space go.

Lisa, Dorit, and Kathy Hilton arrive at Kyle’s house. Kathy announces that she drove all by herself and she seems to want to be congratulated for driving a car for two hours. She’s carrying the world’s largest candy cane striped candle. Why? Kathy is already complaining that there’s no “houseman” to take care of her luggage. She knows this is Kyle’s house, not a luxury hotel, right? Sutton and Crystal Kung Minkoff are pleasant to each other. Garcelle Beauvais is coming the next day, staying in a hotel with Crystal and Erika. 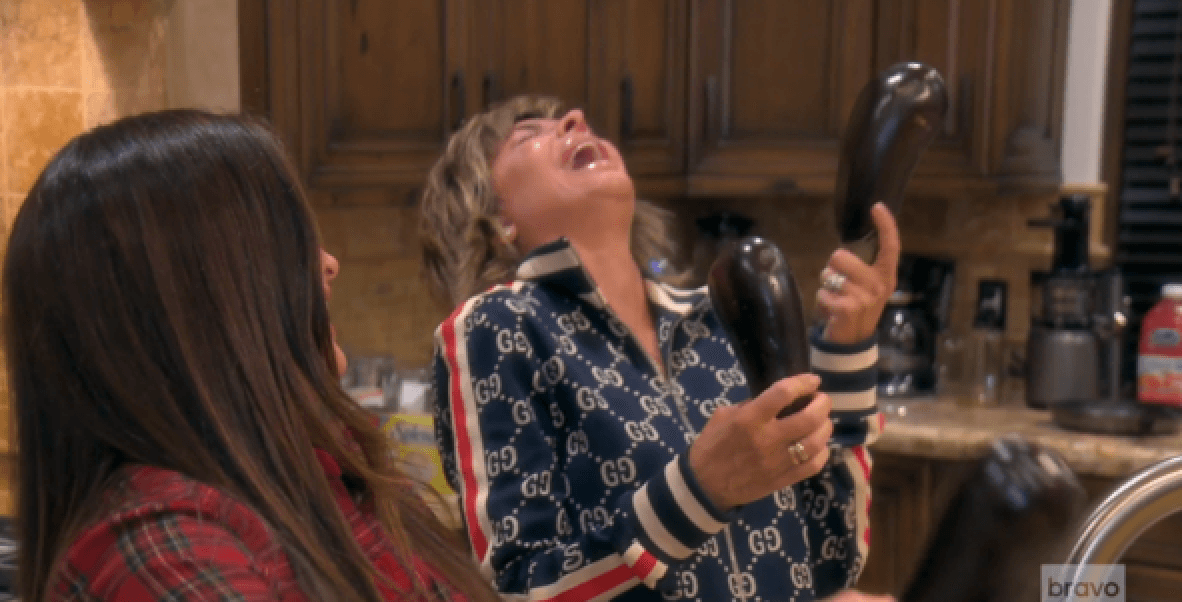 Erika is delayed because she was in court. Dorit, Kyle, and Lisa discuss what hit the news that day, that Tom’s assets were frozen by the federal government. Dorit knows a little bit about frozen assets from a lawsuit in 2019 over an unpaid loan that her husband, P. K. Kemsley, had from almost a decade earlier. Dorit reads the press account alleging that over $2 million was supposed to go to orphans and victims and the money was never distributed properly.

Kathy announces that “Today is the eclipse. And it’s one that hasn’t happened in 600 years.” Kathy and Kyle are joking about not spending time together. Kyle’s happy they are laughing. And Kathy jokes that she missed out on Kyle’s lasagna during their years-long feud.

Erika arrives for dinner. Everyone is hugging her and trying to be supportive, but you know they have questions. Erika announces, “It’s not ok. And it’s not going to be ok for a long time.” Kathy comes down the stairs with her purse. Why is she carrying her purse through her sister’s house? 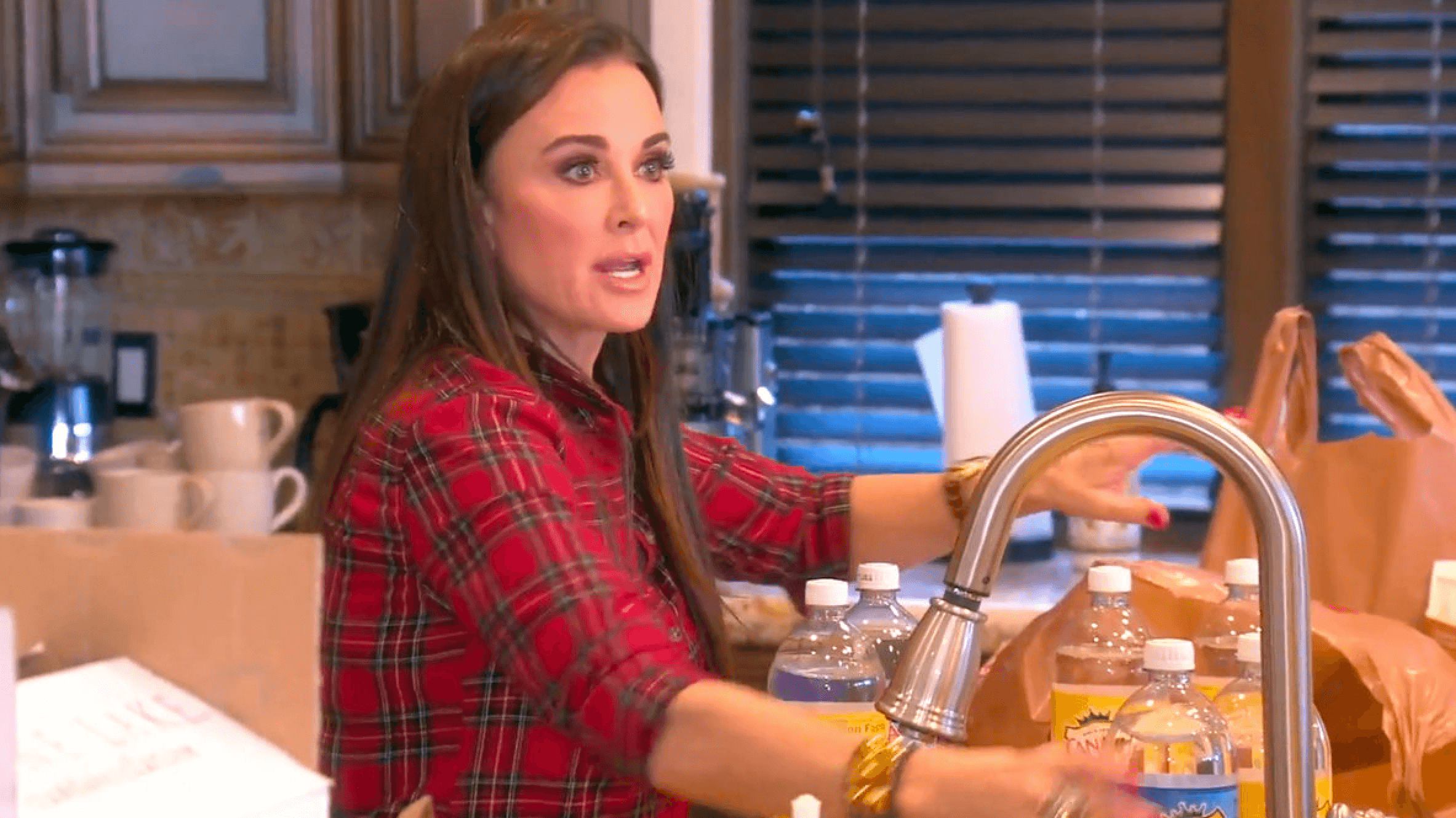 Erika says that one of Tom’s attorneys says that Tom’s not mentally well. And Erika claims to have been saying that (for about a week.) Erika claims that no one was listening to her when she was seeing Tom decline. Sutton doesn’t understand why Erika is dragged into it. The women discuss that Erika’s his wife, so she is tied to it, even if she doesn’t know all the ins and outs of his business. Wouldn’t you like to hear from the other former Mrs. Girardis?

Erika keeps bringing the conversations, week-after-week, to the power imbalance in her marriage. Kyle says of their relationship, “He supported her career and her dreams, but that’s the price she had to pay.” It seems like the issue for today, with whose money did Tom support Erika’s career and dreams?

Kyle makes lasagna, and Kathy tries to “help.” Kathy found some stale bread and starts smacking it together and dancing. Kathy cannot get her suitcases up the stairs. Then Kathy needs to cool off in front of the fan after hauling her own luggage. Erika and Lisa have a conversation about how much money it costs to heat a pool. Erika says she heated the pool at her old house for 20 years and never got in it, never seeing the bill. Then after heating the pool for a few days at her new house, and seeing the bill, she decided to not heat it. Erika is considering herself a penny pincher now. 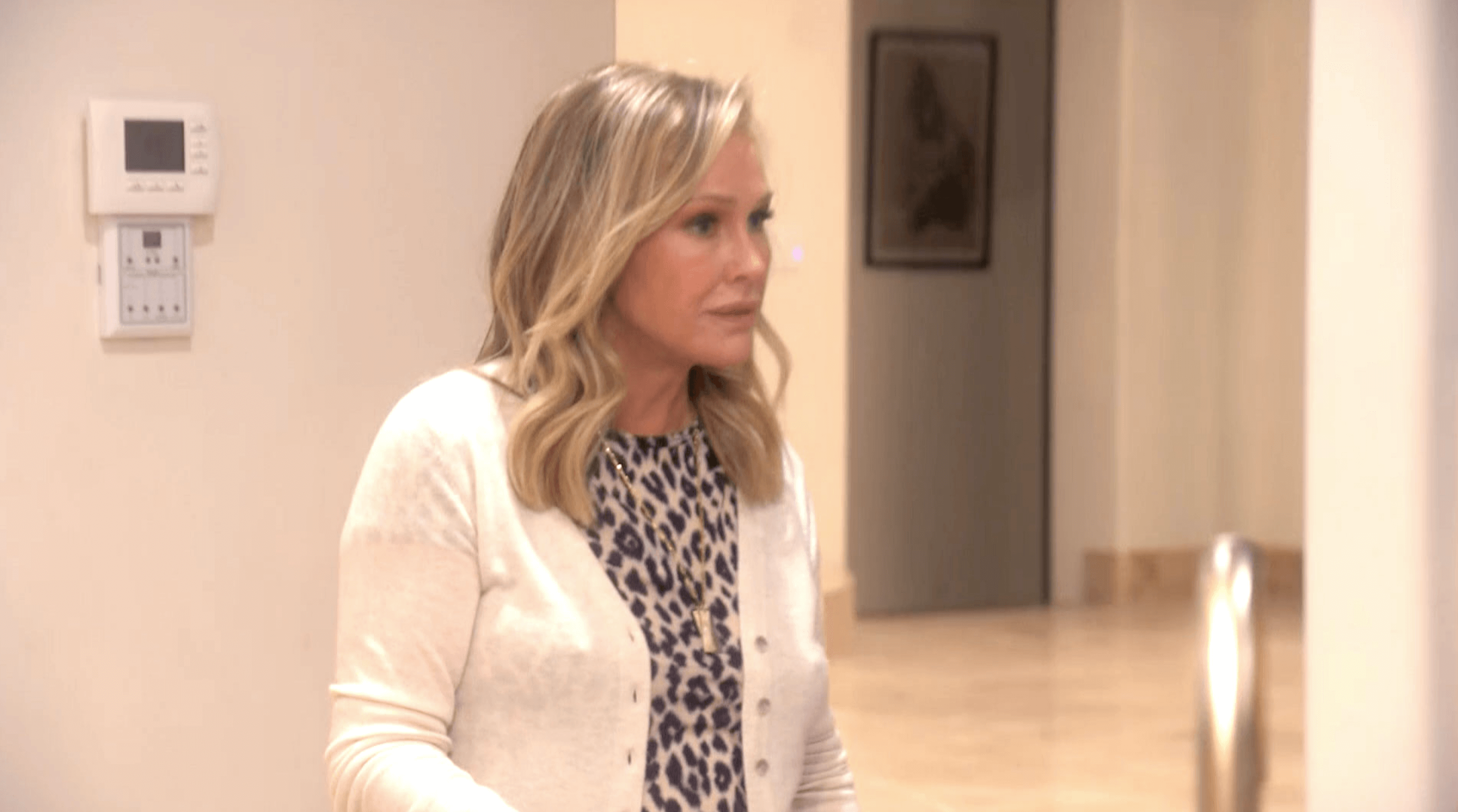 Kathy and Kyle are back in the kitchen. Kathy says Kyle is a very good cook, but she gets easily distracted and has “ADHD…GHIJK.” Kyle broke a glass spice jar. Kathy uses a grill brush to sweep the floor. As they sit down to dinner, Kathy talks about the new moon again. Kathy wants everyone to let go of things, then manifest what they want, and blow out a candle. Everyone watches Erika close her eyes and blow out the candle.

Kyle asks, “What happens with Erika Jayne?” And Erika says, “I don’t know.” Erika tells them that she let go of her office space. The ladies ask if Tom is supporting her at all, and she says no. She also tells the ladies that in the divorce, “I don’t think there’s anything to get.” It’s hard to tell if Erika knows that there is nothing left at all or whether she means that his assets are frozen, so there’s no support for her or cash for her at that moment.

Erika says he should turn in his bar card and stop practicing. She says he’s not well. Lisa is recalling seeing Tom just one year earlier and he seemed fine. Erika goes on to say that Tom was struggling, then he was mad, then he was mean. Kyle says, “He couldn’t drive to work for a long time.” Tom had a car accident three years prior. Erika didn’t tell the group more than the fact that Tom was in a car accident and broke his ankle in 2017. Now she tells more of the story (or a different story). Erika now says, “He was also unconscious for 12 hours, but no one knew it.” The ladies looked puzzled. How could Erika not know that he was unconscious with a broken ankle in a car for 12 hours? Erika says that she found him out of the car—down the hill. She said he also had a head injury and broke his clavicle by driving off a cliff. The cliff is part of a road behind their old house. Then Erika drops a bombshell, that Tom finally called her after the accident. She asks him where he’d been. She says she was just assuming he was with some other woman. 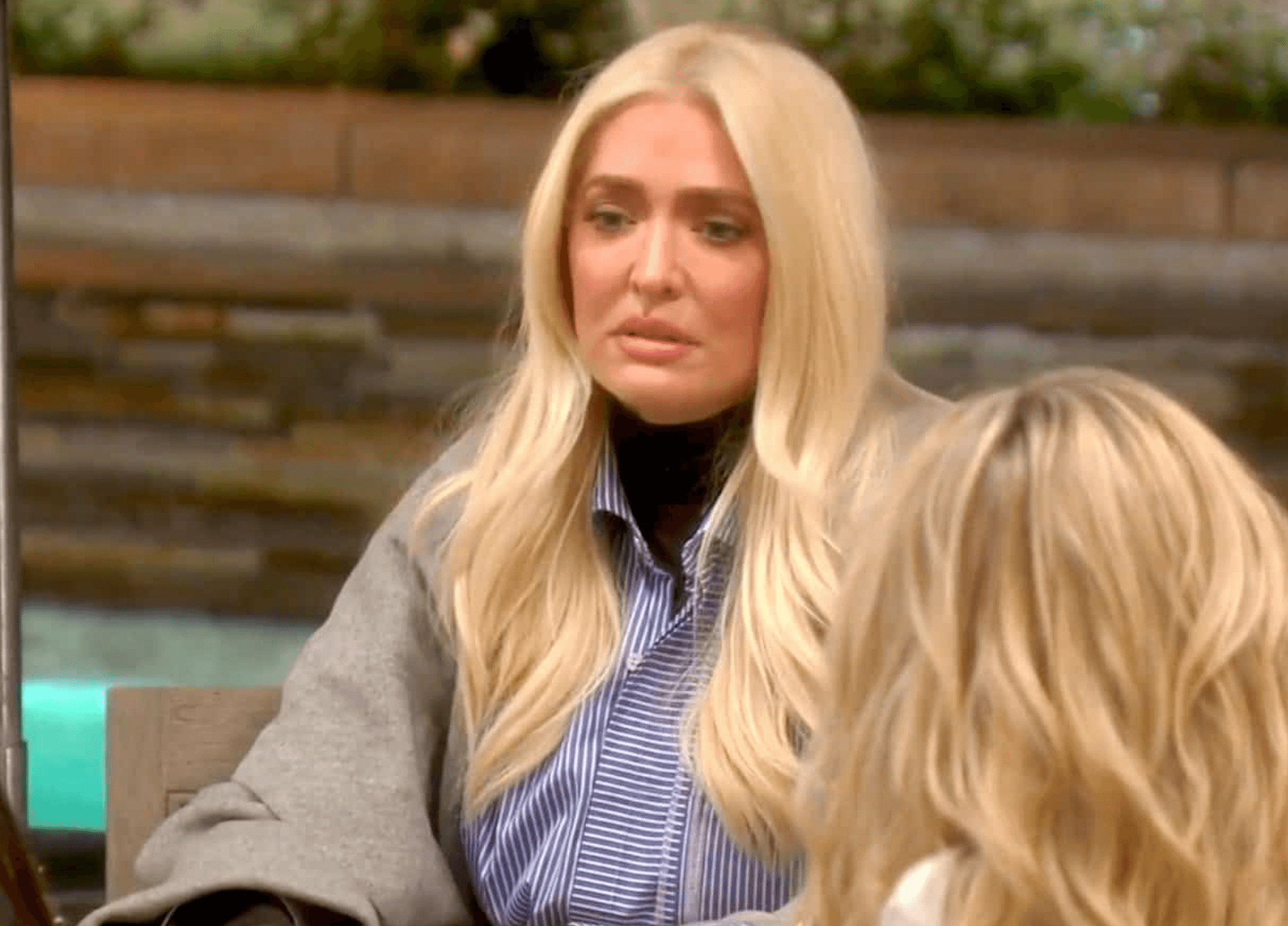 Erika implies that it could have been a number of women that Tom was with—while he was cheating on her. It’s sounding more and more outrageous every moment. Erika says, “You guys have no idea what I have been living through, no idea what I have been through. This is my life.” Kyle says that she has heard the rumors. Erika goes on to say, “After Yolanda [Hadid] divorced David [Foster], I just opened that phone.” She says she found evidence… text and pictures… years long. Kyle wants to know why Erika didn’t leave.

Sutton breaks the tension and seriousness to bring dessert, pancake cake. And Lisa brings some laughs by retelling a conversation that she had with Harry Hamlin that morning when he said, “How did Scott Disick get into our lives?”

The mid-season clips of what’s to come show that the Tom and Erika story will keep going, some friendships will be tested, no one knows what or who to believe, and the men have some strong opinions.