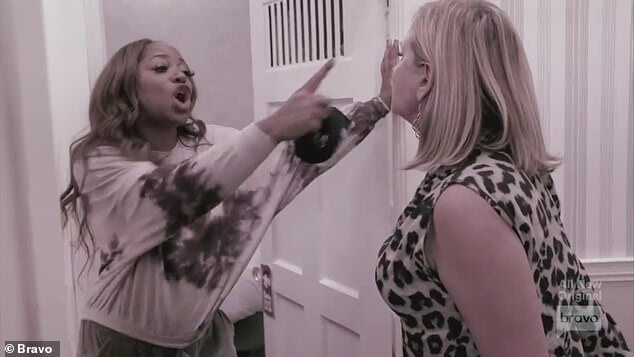 In the aftermath of Bershan Shaw calling the group boring grandmas, she and Sonja Morgan continue their argument this week on The Real Housewives of New York City. Luann de Lesseps, Leah McSweeney, and Ramona Singer try to talk to Sonja about her drinking too much.

Sonja is really drunk and gets agitated and even more amped up as the women try to distract her and pull her away from Bershan. Ramona tries to get Bershan to stop fighting with Sonja by telling her Sonja “is broken.” Ramona tells Bershan that Sonja’s not strong and Bershan is pushing her over the edge. Bershan doesn’t understand why everyone caves to Sonja’s outbursts. Ramona agrees, but she wants Sonja’s long-time friends to figure it out.

Leah heads to her room and tries to corral Sonja. Normally she IS this crazy, but she seems to have no tolerance for it. Luann and Eboni K. Williams go to their rooms. Ramona and Bershan talk about how Bershan might be another set of eyes to see how the group is not helping Sonja by allowing this. 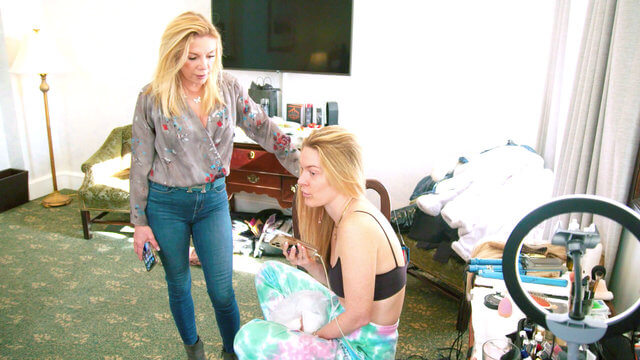 The next morning, Leah tells Luann that Bershan came to her room for a minute last night, and Bershan and Sonja continued on with their argument and had a physical altercation. Leah broke up the fight. A couple of men (production staff) came to help break up the fight and haul Sonja off. As Sonja left Leah’s room, she continued to act foolish and broke the glass on the hotel fire extinguisher box.

Luann and Leah, the two sober women of the group, discuss how Bershan was setting Sonja off. Luann does go on to say that there’s no excuse for what Sonja did, but this group makes excuses all the time. Then Ramona arrives and they retell the story, blaming Ramona for bringing Bershan into the group. It’s interesting that Leah is the one who wants to have the intervention with Sonja. Leah thinks that they are being irresponsible to allow this kind of outbursts from Sonja. Leah says, “I would want people to step in and talk to me if I was punching glass. It’s not like she’s getting drunk and having fun.” Come on, Bravo! Flashback to last year’s tiki torches and the destruction at Ramona’s house, the garden lunch, the dinners that descended to chaos. At least Leah does finally say that “Bershan didn’t help, but this isn’t an isolated incident.” Leah’s almost entire existence on her first season of the show had been drinking and acting out. 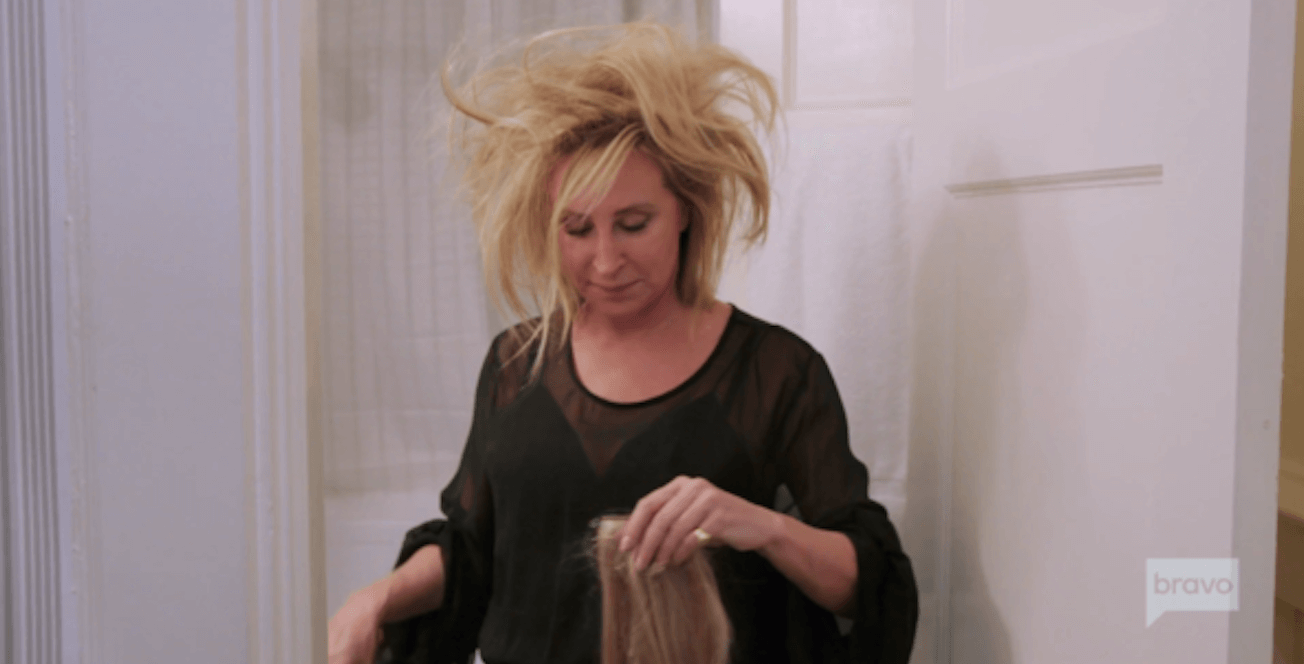 Ramona goes to Bershan’s room to talk about the prior night. Bershan says that Sonja got in her face, and that’s an aggressive move. Bershan does want to apologize for being too open and confrontational, and her tell-it-like-it-is personality comes off too strong sometimes.

Leah tells Eboni what happened the night before as Ramona goes to collect Sonja. Sonja’s still in her bathrobe. Sonja blames Bershan and the cheap wine for her behavior last night. As the other girls get glammed up, Sonja looks like she didn’t even brush her hair. Sonja and Ramona run into Bershan at the elevators. Everyone says pleasantries, while Sonja says, “Great f-ing trip.” Sonja thinks that Bershan should apologize.

Everyone loads up in the van to drive about 40 minutes away. They all agree to have “quiet time.” Is anyone else thinking that Leah should have had quiet time when she and Heather Thomson were on a bus in the Hamptons? Everyone looking at their cell phones and Bershan sleeping was the perfect plan.

At lunch, Bershan apologizes for talking to the group like she’s known them for 30 years. Luann interrupts the apology. Then Bershan continues to say to Sonja, that she is sorry. Sonja makes it all about betrayal. Sonja thought she was bonding with Bershan and they were getting along. In the middle of talking to Bershan, Ramona asks the server for some Kleenex. Sonja turns to Ramona and says, “Shut the f* up, Ramona.” Bershan restates her apology again. They hug it out. And Bershan does tell Sonja how foolish it is to get in someone’s face and that she shouldn’t do that. 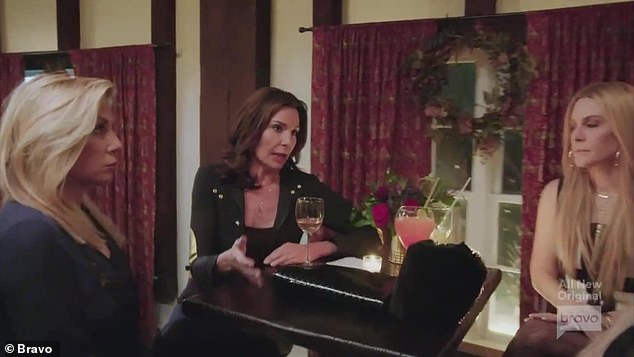 As the women go back to get ready for the séance, some look like they are dressed for a cocktail party, and then Leah looks like she is ready to find her whip. As Leah walks through the lobby, the man in the lobby, probably another hotel guest, isn’t quite sure what to do. Bershan has a huge fur and her Gene Simmons Kiss boots on. They board the bus to go to the dinner/intervention/séance.

Sonja and Bershan hit the bar first to bond over espresso martinis. Luann, Ramona, and Leah are going to try to do the intervention first before Sonja gets too drunk. Eboni keeps Bershan busy while Ramona takes Sonja’s drink in an attempt to lure her to the “intervention table.” As Leah starts off, Sonja seems confused. Luann says she’s worried about Sonja because Luann got arrested for “less than that. I was only drunk in my room.” [Luann conveniently downplays battery of an officer, trespassing, and disorderly intoxication charges.] Then immediately Sonja talks over everyone, denies, defends, and just acts like her drinking is only a girls trip thing. It didn’t really go well. They decide to just leave the intervention behind and go to the séance.

Sandra, the séance host, and Marion, the séance guide, get ready to begin. After their quiet prayer, something drops and makes a really loud noise, shaking everyone up. It was a light from the ceiling that fell. Marion wants each person to put a name in. A man who seems to be some kind of facilitator or medium asks each woman whether or not they want to “receive” messages from him. The first message is for Bershan that she is a regular goat, but she is going to come out of her shell to be a special goat or some sort of thing like that. 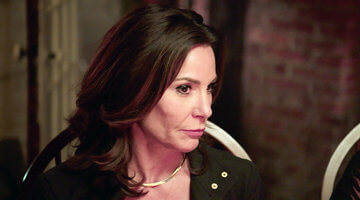 Luann’s message is about an uncle-type, a moody man, and the two of them will eventually go their own ways. Leah’s message is about a woman, a relative, that the medium is having trouble reading. The woman wouldn’t have believed in what they are “doing here.” The medium says that Leah is “studying for something like converting to Judaism,” and Leah agrees. The medium says Judaism will give her structure.

The medium moves to Eboni and a woman standing behind her, an older woman — only gone a little bit of time — her grandmother. The woman is very proud of Eboni, like a second mother to her. The medium says that Eboni has a “strong message,” and she has to keep moving forward. Sonja’s reading involves a man, perhaps her father, with unfinished business. The man wants to apologize. The man wants her to know that “he didn’t know what he was doing.” The medium asks if the man had a drinking problem. The women are shocked that Sonja’s father had a drinking problem. The message from her father is that he is “mortified by what he did. But he wants you to know that he’s not trying to excuse it. He’s trying to apologize to you.” The medium says that Sonja needs more than just a healer, she needs a psychologist or specialist with a PhD because she needs more help to get to the root of this.

The medium sees a man coming through for Ramona, “slightly younger than you. It might be a cousin or brother.” He has a lot of issues in his life. Ramona says that her brother was a “lost soul.” The medium says that she doesn’t think it’s a suicidal feeling, but then Ramona jumps in to say, “self-destructive.” The medium goes on to say that he’s ok now and he’s sorry for hurting you. Ramona feels like she couldn’t fix him, and she breaks down feeling like she abandoned him. The medium tells Ramona to try to let it go. She says, “there is nothing you could have done.”

Leah thinks that the séance gave her more understanding of the others in the group. Then they all laugh when they realize that Leah had her dress on backwards for the entire night.

Still to come this season, Ramona dresses up like Leah, Luann dresses up like Eboni (no Diana Ross black face, thank goodness), and some kind of party goes down. That should be hilarious. Eboni is on the hunt for her biological father. And Sonja is just on the hunt.