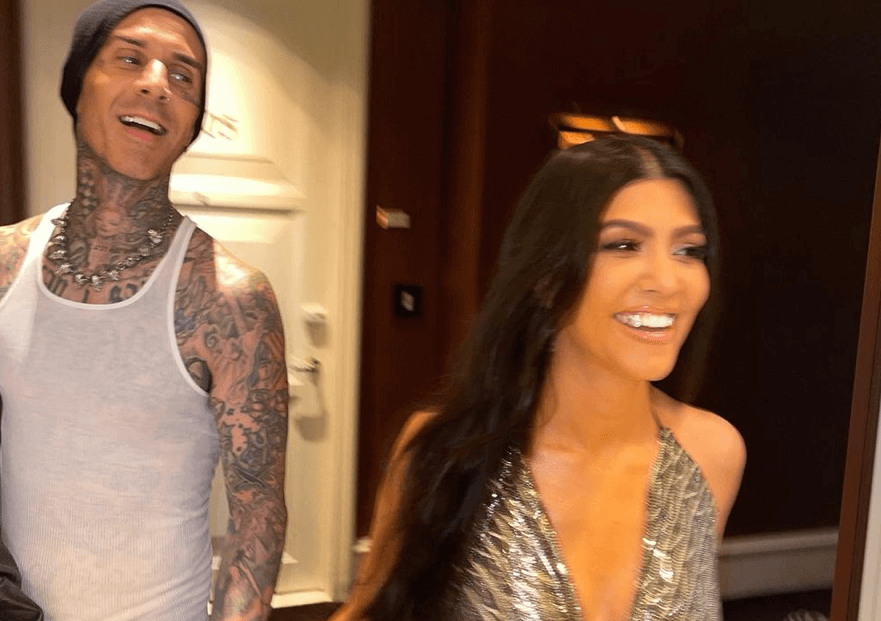 Kourtney Kardashian and Travis Barker are engaged. A source told The Sun that the musician popped the question in Las Vegas during a trip to attend a UFC fight. Kourtney and Travis, who have been dating for seven months, plan to tie the knot later this year.

“I think Travis has been planning the proposal for ages,” said a source close to the Keeping Up With the Kardashians star.

“They want to start their own family together – that is the bigger thing for them because they both have kids, but they want to bring the two families together,” the insider added.

Travis’ teenage daughter, Alabama, posted a congratulatory message, writing that she was “so happy” for the duo, and Kourtney’s sis, Khloe Kardashian, sent a large bouquet of flowers.

Kourtney’s hairstylist got fans chattering when she shared photos of the pair from Vegas writing—”NOW I understand why ppl tie the knot in Vegas. There’s nothing like love AND a good time.” Kourtney and the Blink-182 drummer fueled speculation that they had swapped vows when they posted a couple selfie captioned—“What happens in Vegas.” A source at the Clark County marriage license bureau shot down the rumor when they confirmed that the couple had not paid them a visit.

“Kourt‘s never been married, and for years, told [her ex] Scott [Disick] she wasn’t interested because of her parent’s divorce,” said the source. “She actually turned down Scott a few times – but things with Travis are different. They’ve talked a lot about marriage and the future.”

“She doesn’t want a ‘show wedding’ like her sisters, just a beautiful, intimate celebration where it’s about making a new family,” the tipster added.

Kourtney recently sparked pregnancy rumors when she was spotted in loose clothing after giving up meat, fish, and alcohol. Travis was caught by the paparazzi rubbing Kourtney’s belly, further fueling the baby chatter.

Kourtney’s pal confirmed that another baby is in the former E! star’s future.

“For her, she wants to get to the baby part and feels like she’s finally got her happy fairytale ending and just wants it all to start immediately,” the pal said. “Travis is just as excited, and very much on the same page.”

“Right now they live in separate houses and there are quite a few complications to manage in terms of where the kids live,” the insider shared. “But they are determined they can make this work, and that getting married and having a new baby is the right thing for the future.”

Scott Disick, 38, shared that he was in Greenport, New York with the three children he shares with Kourtney only hours after the news of his ex’s engagement broke. Scott posted several snaps of the trip to the east coast, highlighting his cute brood. The family of four spent time on a boat before capping off their day with a jumbo salted pretzel at waterfront eatery, Claudio’s Restaurant.