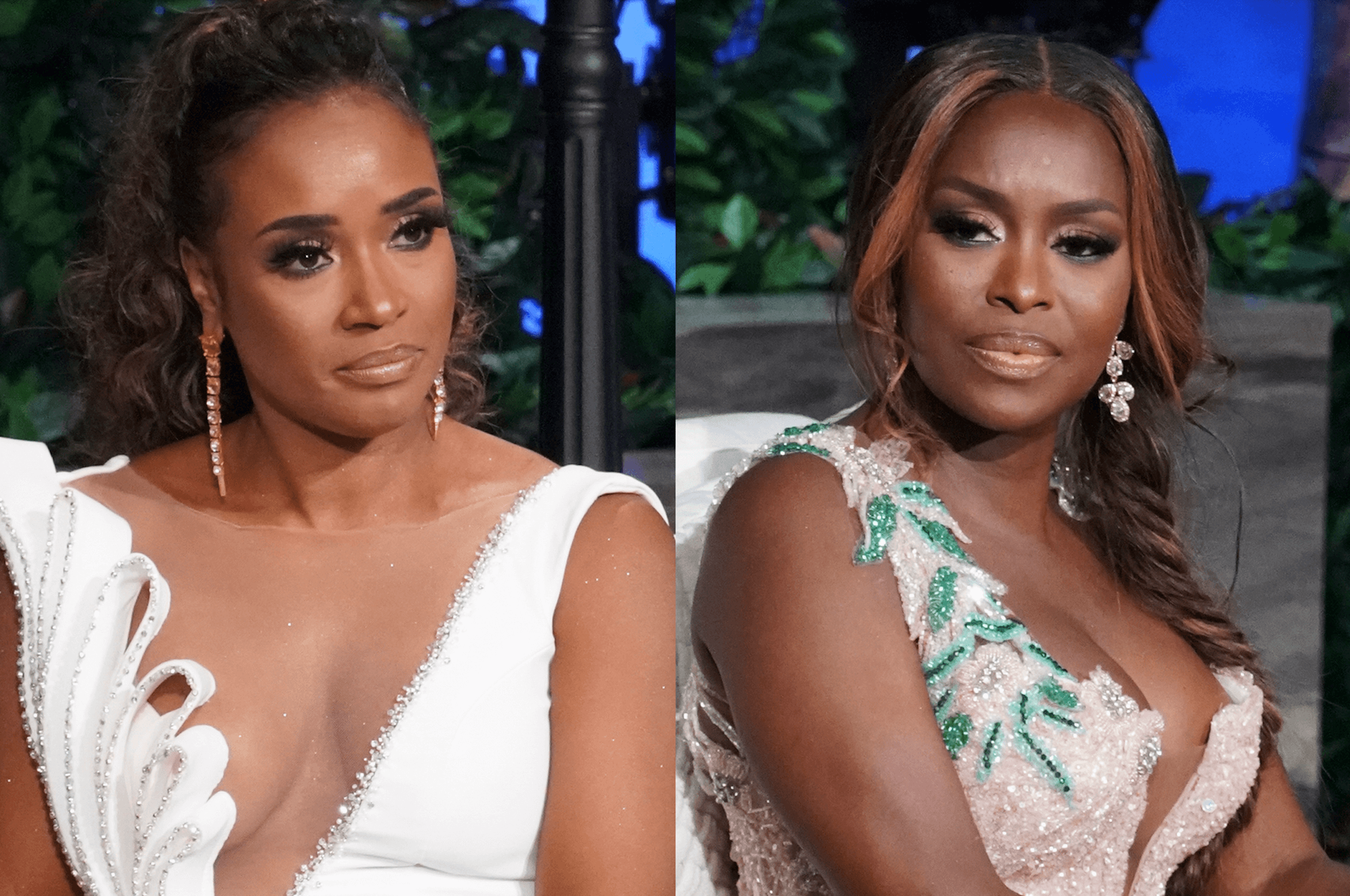 On part one of the season eight reunion, we begin with Dr. Simone Whitmore looking beautiful on the New York streets and ready to get some things off her chest. The reunion stage is beautiful, as the women finish getting ready. Andy asks Dr. Heavenly Kimes who she thinks has the most to answer to, and she answers Toya Bush-Harris. Anila Sajja is throwing shots at Tacky T ( Toya) while Quad Webb-Lunceford eggs her on. Andy bounces from room to room and reassures Quad that he wants her there, despite some of the ladies wanting Quad to be excluded. Calling a code blue, the women head to the stage and get ready for the showdown! The stage is a replica of the Capital and the work the ladies did in D.C. Andy begins with Simone and asks if she’s vaccinated against the shade. Introducing Toya, Andy asks if she’s ready to take on Serena Williams and Toya admits that she’s more on Venus’s level.

Greeting Contessa Metcalf, Andy is curious whether Contessa brought any healing crystals with her today. Admittedly, Contessa says she has them places strategically underneath her gown. Fighting off all that negative energy I see! Anila is welcomed to her first reunion, and Andy asks if she’s wearing a dress from the Lisa Nicole Collection smh! Of course, Anila says she isn’t but manages to note that Lisa Nicole Cloud still hasn’t paid her. Greeting Dr. Heavenly Kimes, Andy asks if she’s sitting on the intelligent side and Heavenly reveals, she almost didn’t make it to the reunion! Heavenly’s son is sick and has been admitted to the hospital. Luckily, Dr. Damon (Daddy) Kimes is there to hold down the fort. Dr. Jackie Walters is in good spirits and thinks they will tear each other up, but also build each other back up afterward. 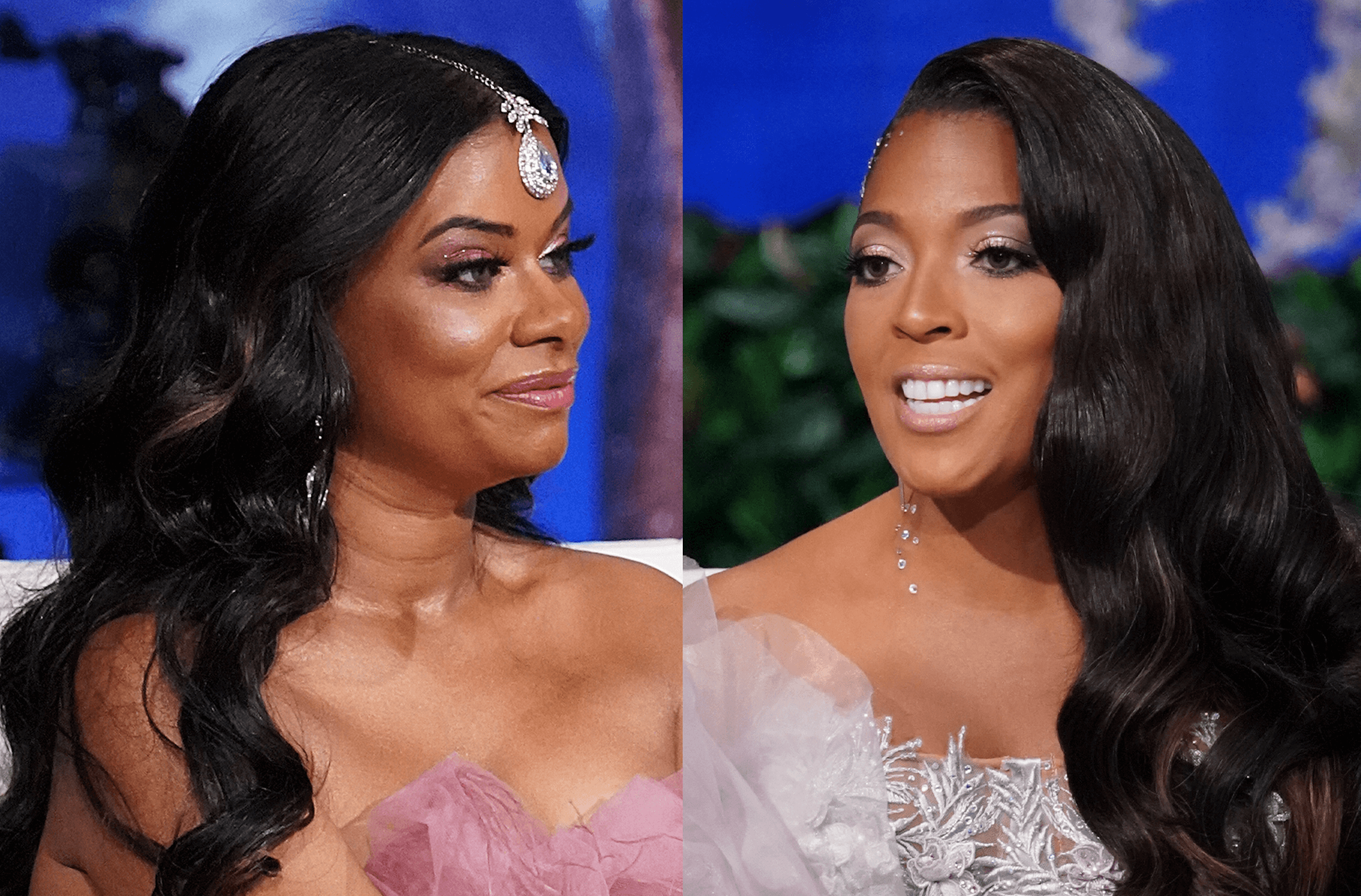 Diving into the ups and downs of the year 2020, Andy gives us a quick flashback of the hilarious moments during the pandemic. We all remember the doctors coming home and stripping before walking into the house. Contessa swerving Dr. Scott Metcalf on a kiss, and Quad spraying Anila down with Lysol. No matter how much the pandemic tried to bring us down, I’m glad we were able to depend on these ladies and their husbands for the laughs we all needed. Back to the couch, Andy asks the women about managing life during quarantine, and new skills they’ve developed; before diving into the mess that was Anila and Toya’s friendship. A brief recap shows Anila being accepted by Heavenly, even though she couldn’t get Anila’s name right.  Anila’s life was stressful due to building the house, her mother’s opinion on everything, and Anila’s unwillingness to stick to a budget.

We see the breakdown of Anila and Toya after Anila admitted to not paying her MUA, and their relationship was downhill from there. Anila feels like Toya gaslights her and makes her feel small, whereas Toya doesn’t feel like she’s done anything wrong to Anila. Andy asks the women after the recap, how Anila is fitting in with the group. Simone thinks Anila has done an amazing job of establishing her own relationship with the ladies. Anila is finally moved into her new home, with a final budget of 3 million! Andy not missing a beat, asks Toya if she’s visited Anila’s yet and of course she hasn’t. Anila received some harsh comments from the fans, who wondered why Anila was building a house in the first place; when it appeared, she couldn’t even pay her MUA and hairstylist. Anila claims her comments about not paying her workers were a joke, and that she did in fact pay everyone one time. Mmmhhmm, sure Anila.

Toya chimes in and says that she has receipts from both hair and makeup claiming that Anila didn’t pay her, while Anila brings out receipts of her own! Andy is getting his life while looking shocked at what’s unfolding. Andy walks over and collects the documents from Anila; while Toya reads a text from one worker that clearly shows they had to asks MULTIPLE times for $375! Anila doesn’t answer to the text but claims how Toya hasn’t given the worker a raise in eight years. Continuing, Andy asks Anila about the rest of the ladies’ clothing choices and Toya admits Anila hurt her feelings during the season. Toya doesn’t think her comments about paying the MUA weren’t petty, while Anila says she was embarrassed by the issue being brought up on camera. 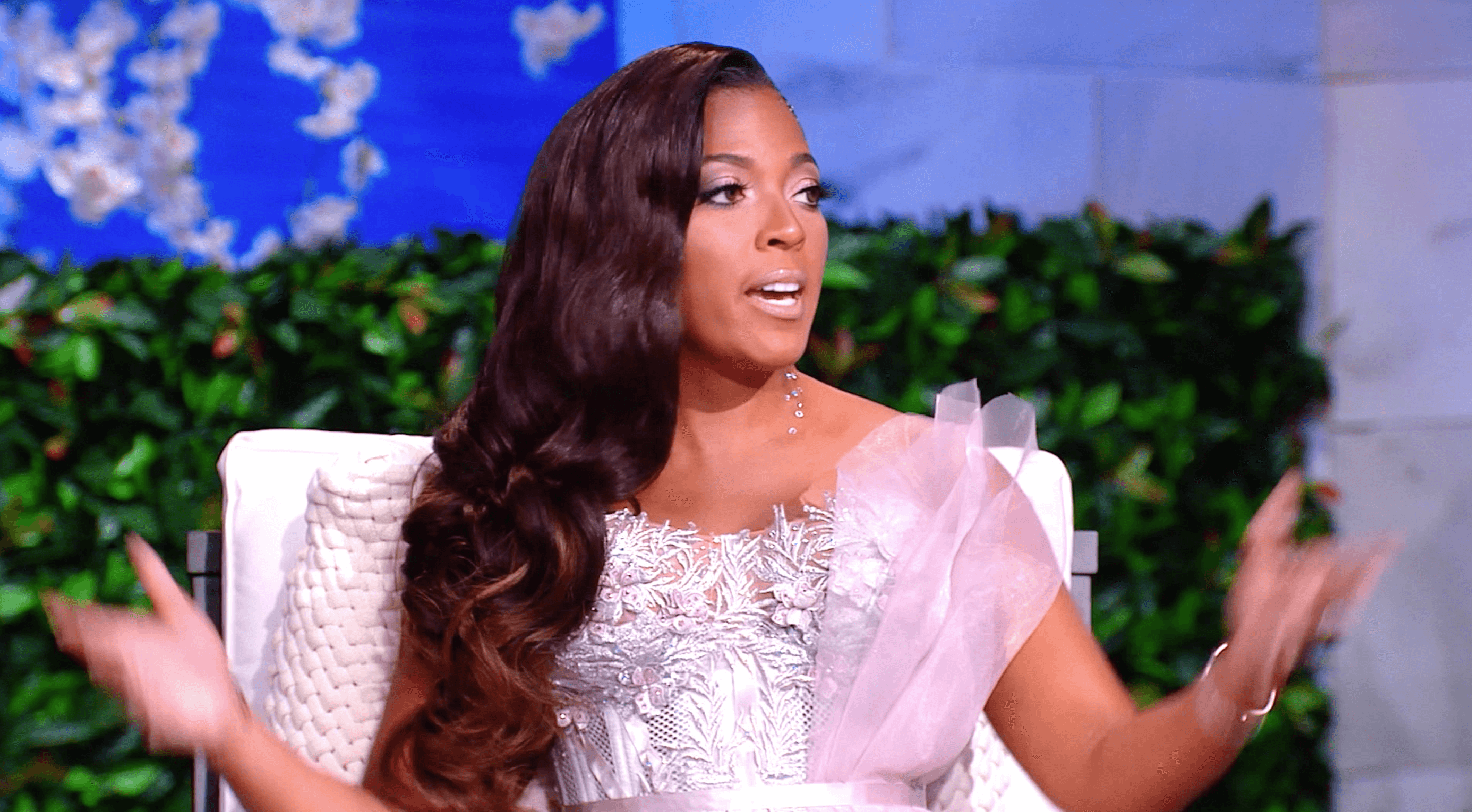 Heavenly thinks Toya shouldn’t have been so blunt with Anila, and everyone laughs at the irony of Heavenly’s point. Bringing the women back to focus, Anila states Toya treated her like a puppet; while Toya doesn’t take responsibility for words the other ladies said. Anila claims that Toya talks down to everyone, and Simone jumps in Toya’s defense. Acknowledging that Toya brought Anila into the group, Simone admits that Toya isn’t as delicate in her approach, but that Toya genuinely cares about her friendships. Toya apologizes to Anila for her aggressive approach all season, and Anila seems to accept the apology. Anila misses her friendship with Toya and even gets emotional talking about how much her kids love Toya. Let’s hope this is a start to mending their friendship. Anila and Toya wobble their way over to each other and hug it out before Andy switches gears.

Ms. Quad comes to the stage with her loud personality, and we are recapped with all her moments from Anila’s Holi event, to blocking unwanted questions from Heavenly. Kari Wells shaded Quad’s birthday pictures, while Heavenly had a few choice words of her own. Quad misinterpreted Heavenly’s emoji and thought Heavenly was calling Quad stinky or smelly. Seems like Ms. Quad has some hidden insecurities about her scent…ew. Andy asks about Quad’s new home and proceeds to ask Toya how she feels about Quad’s new place. Giving no comment, Toya tries to stay clear of Quad’s anger, but Quad hasn’t let go of the “little a** apartment” comment. Jumping into the viewers’ questions, on WWHL Quad wasn’t apologetic about jumping the gun on Heavenly’s comment and felt her clap back was well deserved.

For now, Heavenly and Quad are in a better place and Simone comments on how Quad holds a grudge. Quad not taking too kindly to Simone’s observation, disagrees and says all the ladies hold grudges. Quad impersonates Heavenly and the slick way Heavenly likes to drop bombs. Quad admits to dating a few men before Andy suggests hooking Quad up with Bill Gates (she wishes). The husbands arrive at the reunion, while Andy revisits Toya’s rough year. Flashbacks of the previous year show Toya getting frustrated with Eugene and blowing up at Heavenly and arguing at Quad’s townhome. Toya went through it last year and her actions towards the ladies prove it. Andy asks whether Toya has any regrets or things that she would like to take back. 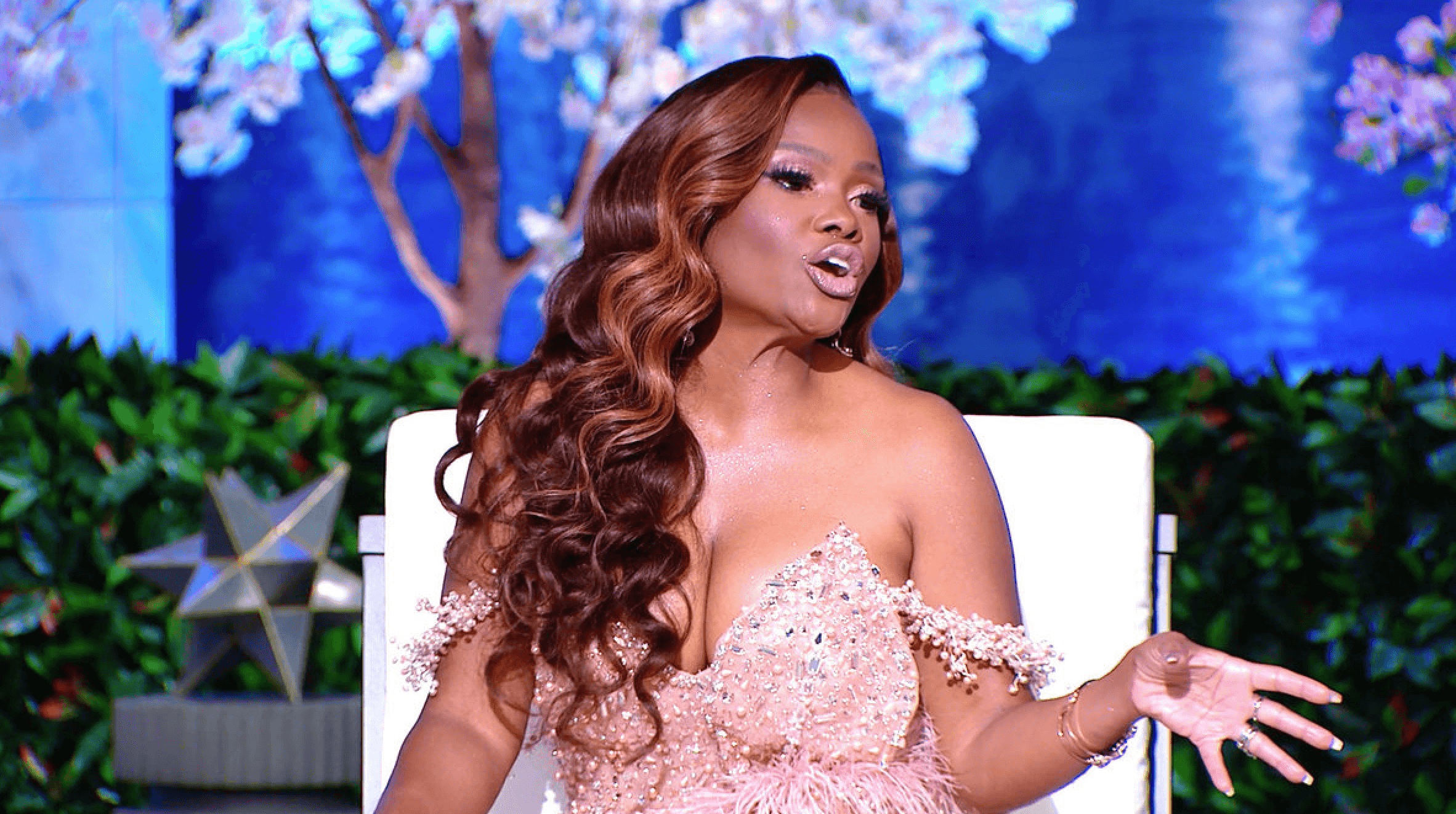 Beginning to get emotional, Toya says the friction was bad and she feels a little embarrassed by her actions. Admitting she didn’t communicate well this season; Simone encourages Toya to verbalize what’s hurting her within this group. Toya reveals that she was stressed because Eugene was depressed, and she thought he had Covid at a certain point. Toya doesn’t feel like the ladies checked in on her, and Heavenly chimes in that they all been through the same thing. Heavenly isn’t giving Toya a pass and thinks Toya only cares about herself. Contessa attempts to get them back on the same page but to no avail. Overall, Toya was in a bad place and wants to improve on her communication; while Jackie admits she wants Toya to take some accountability. Toya feels like when she attacked, that the ladies attacked her back in a wrongful way.

Revisiting the horrible things Heavenly said about her, Toya isn’t letting this grudge go so easily. Heavenly allegedly called Toya dumb and a prostitute! Heavenly having enough of Toya’s antics, tell her to calm down and fix the way she’s speaking to her! Heavenly snapped on Toya! Getting into a screaming match, Toya, and Heavenly go at it before Andy redirects back to Jackie’s point. Toya admits that she shouldn’t have been tipsy on the live, and that she shouldn’t have been so aggressive when speaking to her friends. Toya dives into why she put her house on the market, Andy revisits the fun the ladies had over the season. From the sex toys to the husbands asking for help rubbing their meats; the ladies clearly hit their funny bone during the pandemic. 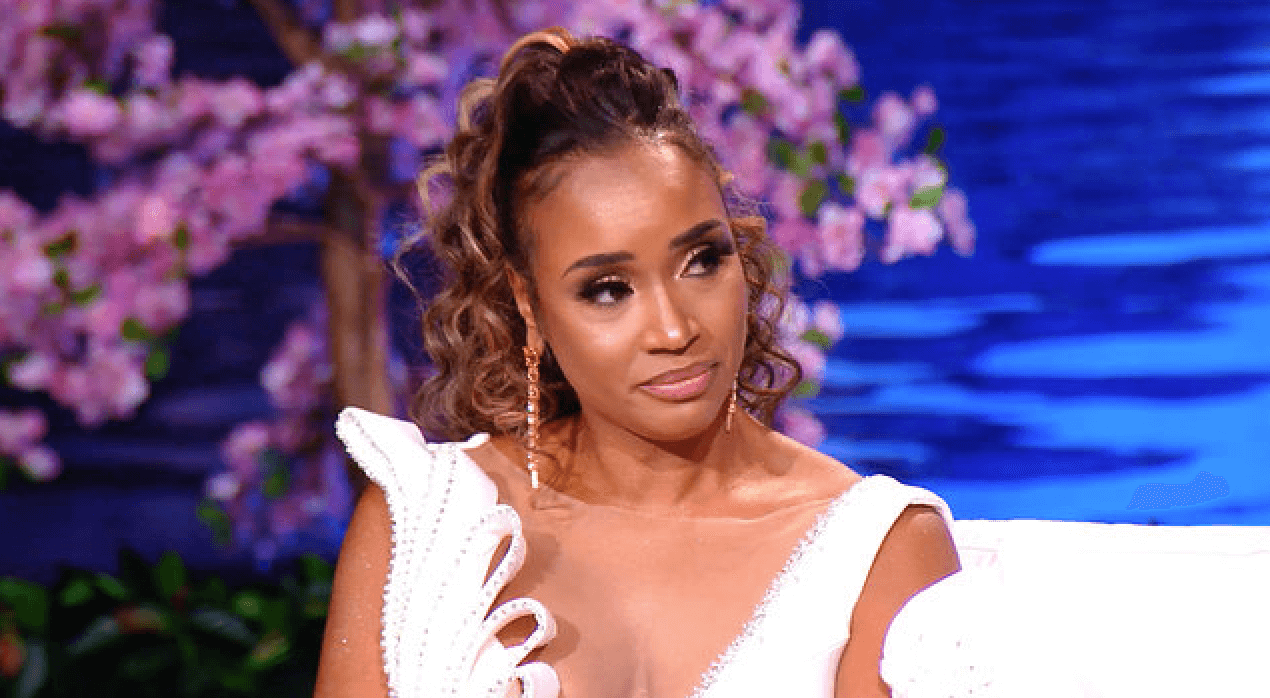 After the flashback, Simone admits that her sex life has gotten better during the pandemic. Andy asks about the drunken kiss between Toya and Quad, while the two admit they were both tipsy. Quad admits that she’s kissed Anila on the lips after a bottle of wine, and Heavenly gets a bit jealous. Toya willing to give Heavenly what she really wants, agrees to give Heavenly a kiss that shocks us all! After the quick kiss, Andy dives into the problems that Scott and Contessa experienced this season. The viewers ask Contessa if she thinks Scott is cheating, while the husbands watch backstage. Scott doesn’t think he’s done anything inappropriate and doesn’t seem to be truthful with the other husbands. Simone breaks it down and Toya wants Contessa to hold Scott accountable. Jackie claims that she is confused by the things Contessa says to Scott and that Scott may be confused by the mixed messages as well.

The ladies try to get Contessa to understand that their marriage is confusing, especially after seeing the pair travel like nothing’s wrong. Contessa gets defensive and says she’s still married with kids and wonders if the ladies want her to be mad all the time? Toya reiterates that Contessa and Scott should show the kids that Scott respects his wife. Contessa seems like she doesn’t want to face the truth, but all will finally be revealed on part two of the season eight reunion! See you next week!