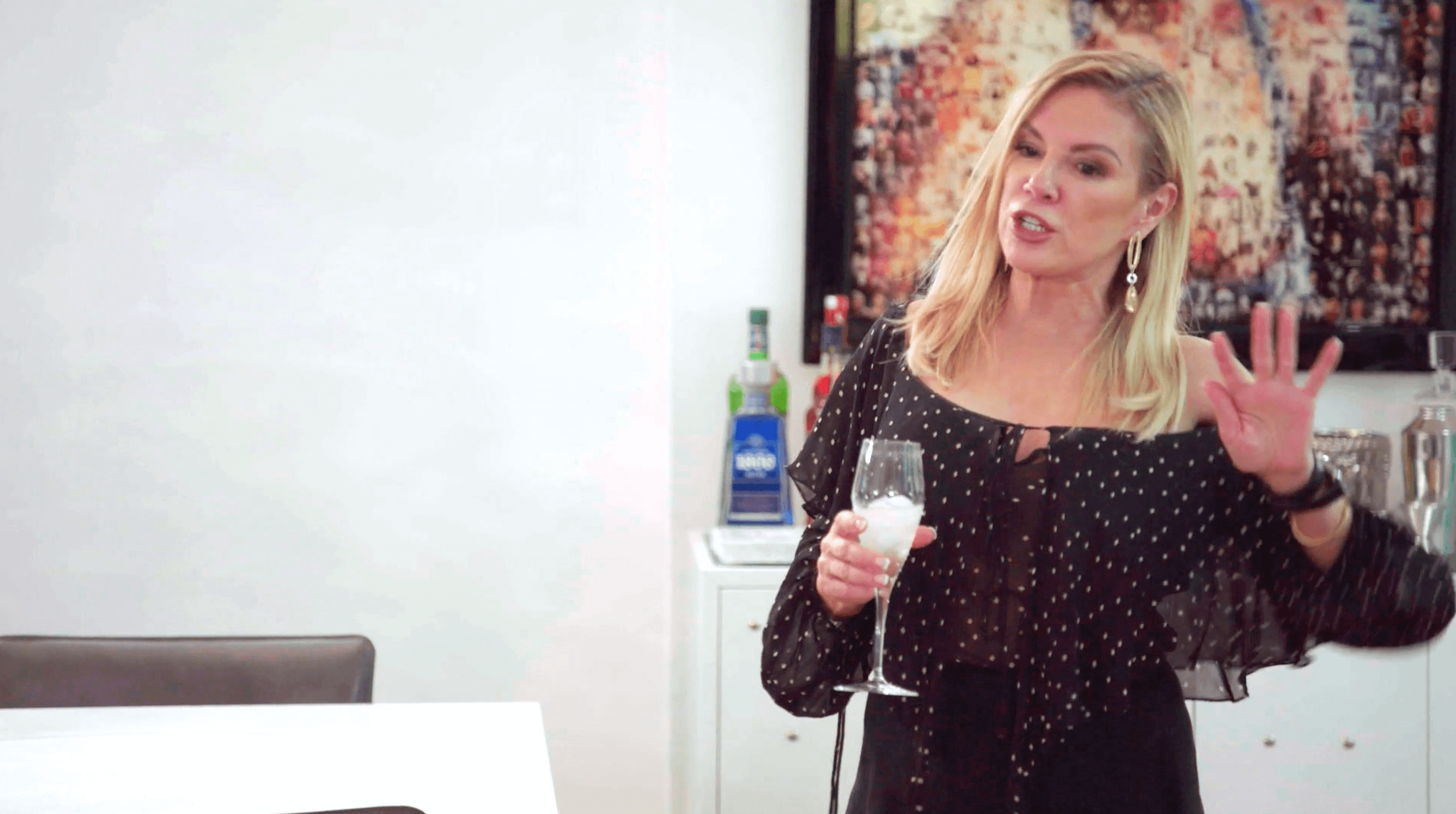 This week on The Real Housewives of New York City, the women dress up and show their talents in Luann de Lesseps Halloween 1970s Miss New York pageant. And it’s election day 2020. Eboni K. Williams hosts an election results party at her apartment. Will it be preachy? Fun? Or just another mess?

Still in the Hamptons at Ramona Singer’s house, Leah McSweeney blew up at Heather Thomson before the van even left the driveway. Luann runs into the house to warn everyone that they need to hurry. Leah storms back in the house, picks up her hula hoops, and seems to compose herself enough to go. Heather follows, wanting to confront Leah for the way that Leah talked to her. Leah decides to go to the pageant. She says, “I can’t let this giant neck wound go to waste.”

Once they are all in the van, Leah wastes no time asking Heather what she “misheard,” and Eboni jumps in right away with what she “mis-said.” They seem to squash it as they arrive at the Topping Rose House in Bridgehampton, New York. Does anyone think this parade of hula hoops, batons, and a good old murder victim is something the locals are still talking about? 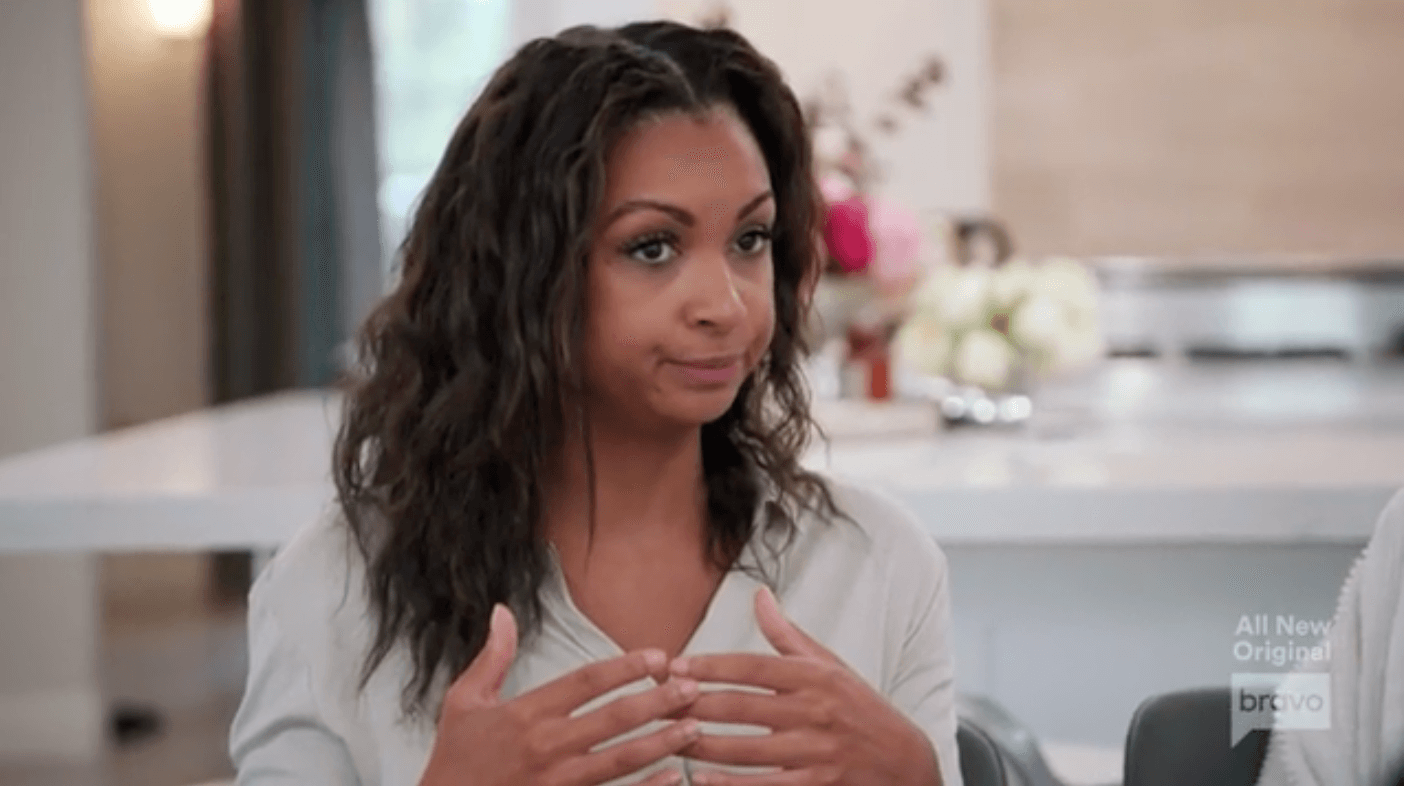 Luann’s daughter, Victoria de Lesseps, and niece, Nicole Nadeau, are at the pageant, also. Luann’s friend, Hank, is hosting. Then Luann starts off the talent portion showing her baton twirling. Offstage while Sonja Morgan strips to change outfits, Ramona works out in her pageant dress, doing a rather impressive 40 pushups. Leah’s up next with her hula hoops. Then Heather does a cheerleading routine with “Be Aggressive!” How about, “Be Passive Aggressive!”? Eboni does a “spoken word” piece on black women. Then Sonja does a combination of mime and dirty charades. Eboni is the 2nd runner-up. The first runner-up is Luann. And the winner is Leah?? Luann rigged the competition for Leah to win. Part of Leah’s acceptance speech is to “own my bad reactions that I’ve had a few times this weekend.”

The next morning at Ramona’s house, as everyone is packing, Leah already left the night before. Leah sent a text message that her grandmother passed away. As the ladies eat breakfast, Eboni shares that she talked to Leah about it, and Leah seems ok. Eboni said that it probably helped Leah to not see her grandmother at the end and non-responsive, but to remember the good times. Eboni is in this same situation with her own grandmother. The women support Eboni. And as Eboni says that her mother is the only family she will have left when her grandmother passes, she announces that “there is a young woman. Her name is Ashley. And she reached out to me on Instagram about a year ago. And she proclaims to be my sister.” Eboni says that she doesn’t know who her father is. Eboni’s possible sister, Ashley, told Eboni that she grew up knowing about her sister. Ashley was told she had an older sister. And Eboni’s photo was on her paternal grandmother’s mantle as Ashley was growing up. Eboni would like to figure out if she actually has a sister. 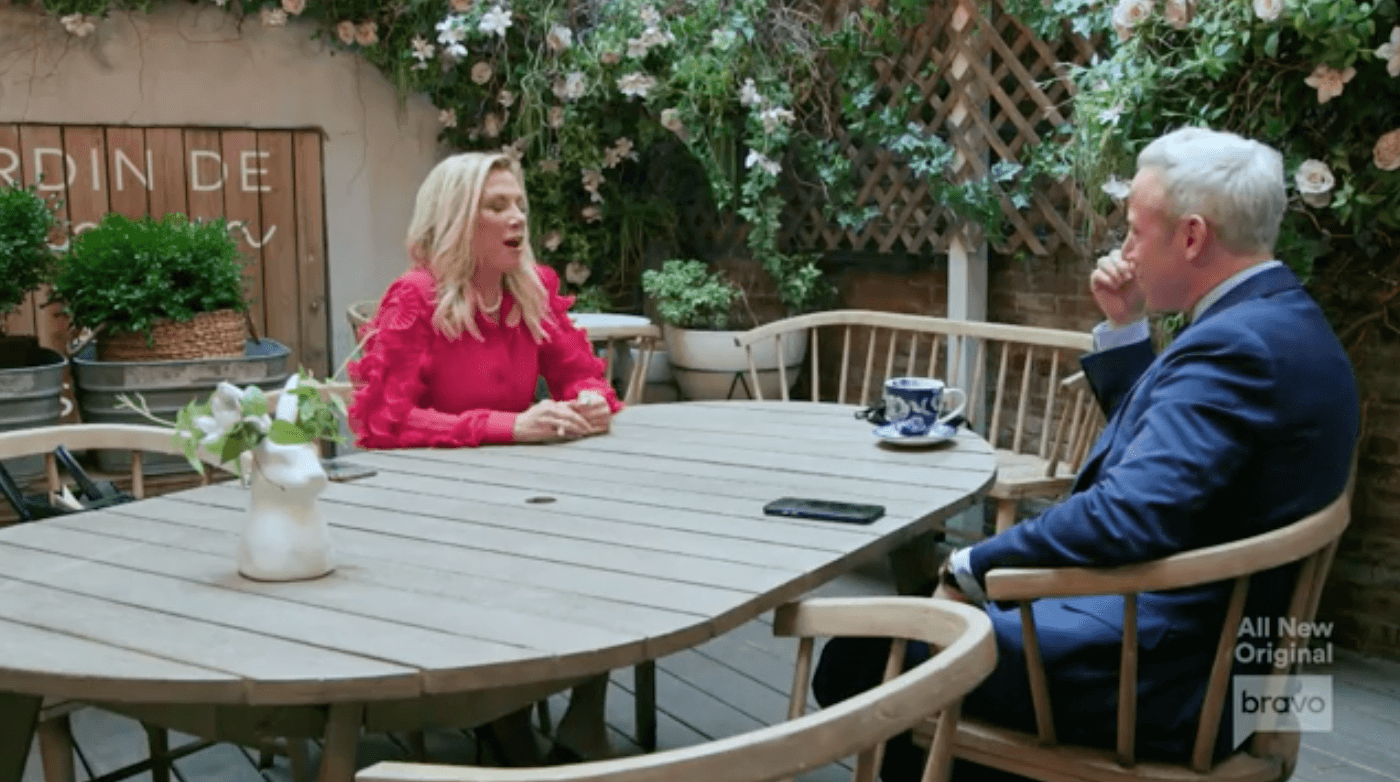 Heather turns the conversation to an awkward discussion about “eloquent” versus “articulate”, referring to what Heather said a couple of nights ago. Heather tries to apologize for misspeaking and using the wrong word. Eboni explains that telling a black person that they are articulate reinforces the subtext “that black people in this country are not expected to speak ‘The King’s English’ properly.” Eboni thinks that it’s progress to have these uncomfortable discussions.

Back in New York City, life returns to more normal activities. Eboni is doing her podcast. Luann has a new fuzzy white rug next to her bed. Luann’s assistant, Molly, demonstrates how to brush the rug. Leah and her daughter, Kier, and sister, Sarah, prepare for the funeral. Sonja and her assistant, Emma, are sorting reusable pieces of paper and envelopes. Is anyone surprised by this? Ramona meets Michael Lorber, a real estate broker, for lunch. Michael has a successful career in real estate and appeared on Million Dollar Listing New York in Season 1 and a few appearances in subsequent seasons. Ramona feels that she would be a natural in real estate and is hoping that Michael might be her sponsor. When can we see Kelly Killoren Bensimon and Ramona Singer on opposite sides of the real estate negotiating table? BRING IT!

Ramona and Michael have a discussion about “terms to avoid” when selling property. He must have heard about Ramona. They discuss alternate names for the master bedroom, his and her bathrooms, and “steps to The Park.” Ramona knows that she’s unfiltered. Michael is inviting her to work some open houses. And Ramona is going to keep studying for the exams. 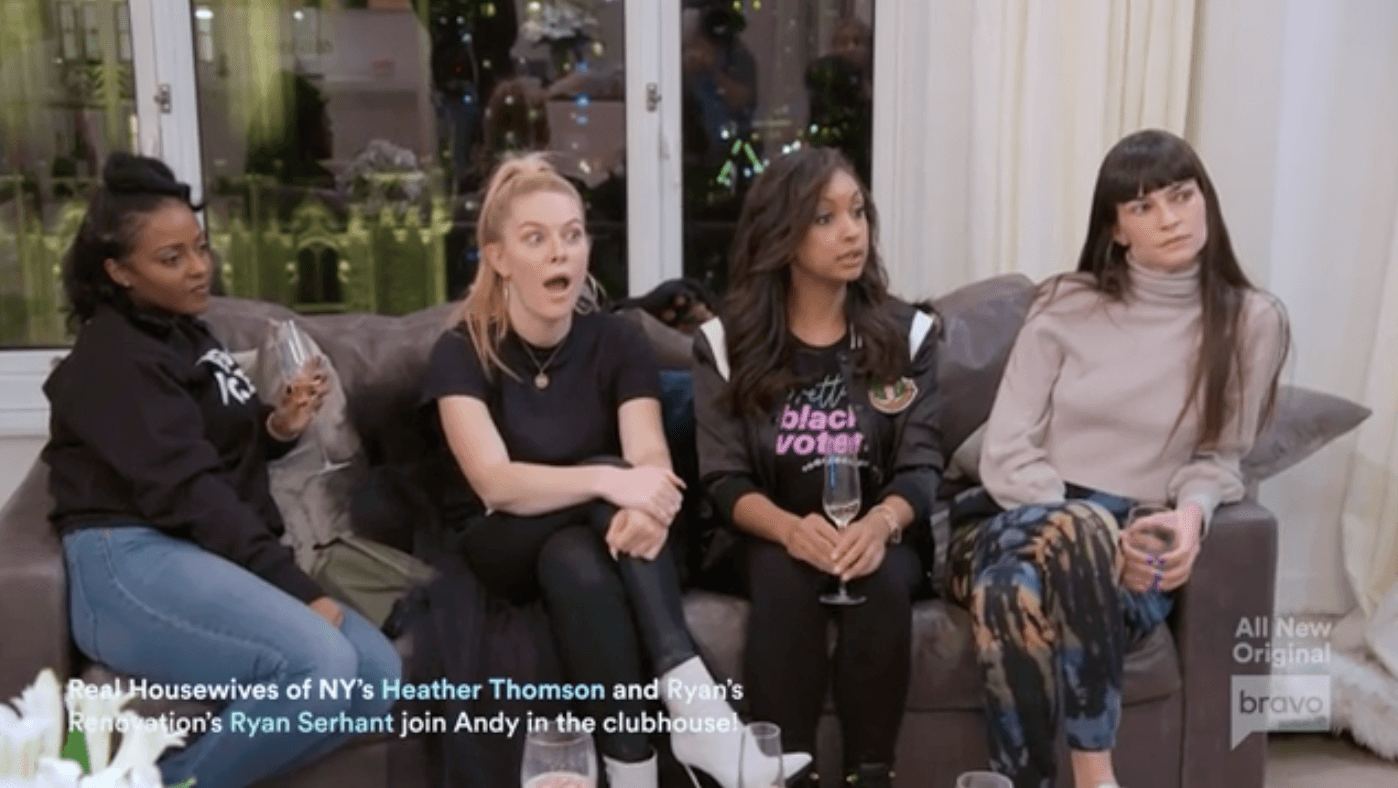 Leah, Eboni, and Sonja meet at Martin’s boxing studio. They talked about Leah’s grandmother’s memorial service. Is anyone else distracted by the chalkboard sign that says Sonja, J.P. Morgan, Luann, Count, Tom D’Agostino? Leah and Eboni want to build Sonja’s self-esteem. Leah says, “You have to stop letting f-ing Luann f-ing steamroll you.” Martin draws out the frustration in Sonja, and she starts wailing on him. Eboni and Leah cheer her on.

It’s Election Day. Leah and Martin go vote together?? Ramona shows the long lines at the polls. Luann votes with her dog in tow. Eboni calls it “Happy Kamala Harris Day.” At Eboni’s apartment, she hosts an election night party with her friend, Natalie. A special guest arrives in a JKF mask, and it’s Luann. Luann brought other masks to share. Leah and her sister, Sarah, arrive. Leah’s dog is a little terror, jumping on the table, trying to eat the snacks. I guess it’s ok to call Leah’s dog “aggressive” and say that Leah is, too.

Eboni says she’s hosting a party the following night in Harlem. Sonja arrives looking cute and immediately flips up her dress to show everyone that her red shoes match her red underwear. She’s already tipsy. Ramona’s out of town that night, but she Facetimes with Eboni. Ramona says that she thinks it’s safe enough to come back to the city the next night to attend Eboni’s Harlem party. After the phone call with Eboni, Sonja trash-talks Ramona’s new friendship with Eboni criticizing Ramona for posting pictures on Instagram with Eboni and Ramona’s new friend, Bershan Shaw. Sonja says, “I don’t like wearing causes like a handbag.” 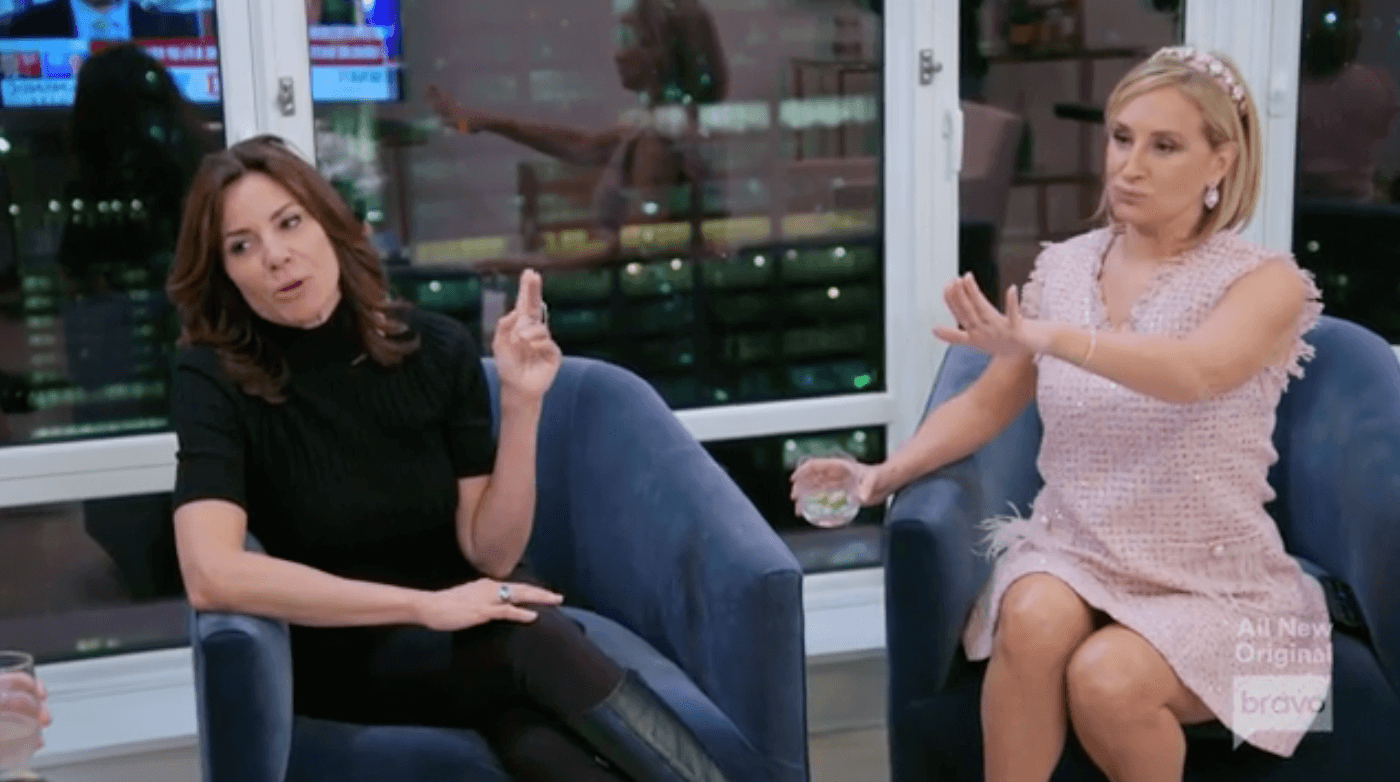 Eboni asks, “Is Ramona is posting pictures, rapid-fire, of black women in her life to counter a narrative that she’s racist?” Leah says yes. Sonja says yes. Luann says yup. Sonja is getting more and more animated and worked up about people who “ride a cause to look good.” Sonja goes off about the pictures of Ramona’s “new friends.” This harkens back to the days when Ramona was bragging about her fifty close girlfriends, and Sonja was upset about it. Sonja goes on to say that “Ramona is a master manipulator.” The ladies attribute her outburst to too much alcohol. Luann gets anxious and leaves. Sonja keeps going and going as the others realize that it’s getting late.

Next time, Eboni hosts a Harlem party. Luann and her daughter have a moment about Luann’s sobriety. And Eboni tries to educate Ramona, but Ramona exclaims, “I don’t want to be educated.” Ramona and Eboni disagree about whether or not they have the privilege to escape politics and have fun.