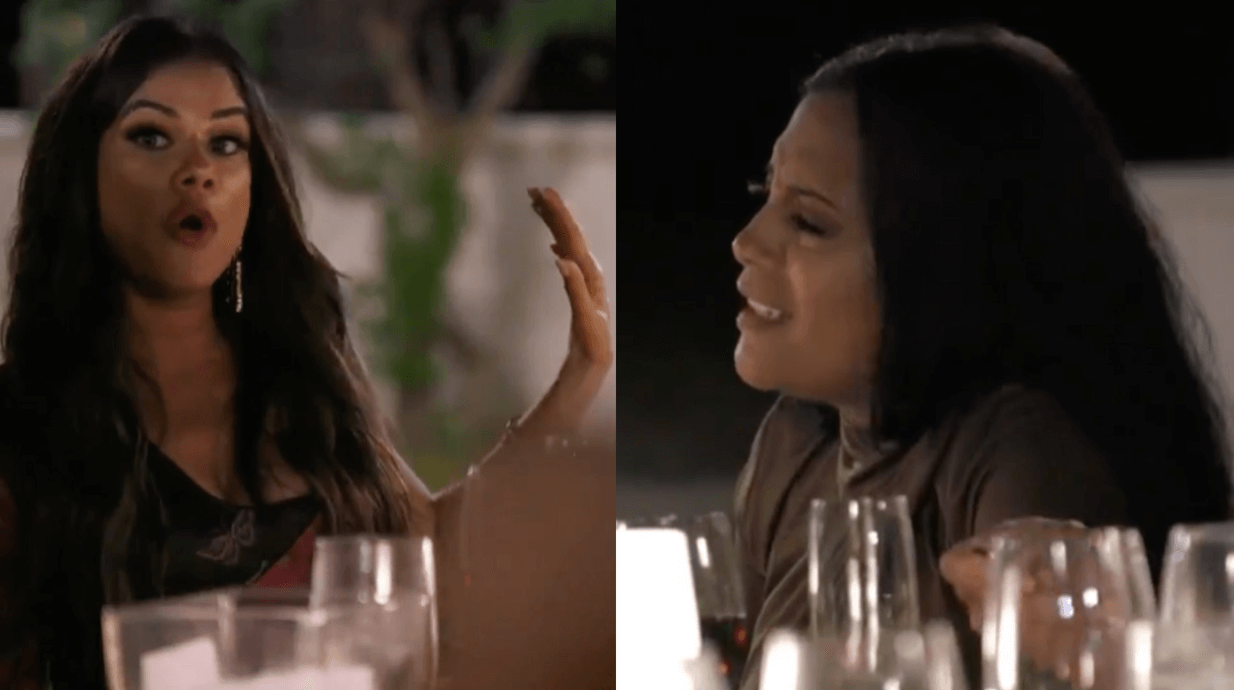 This week on a brand-new episode of Married to Medicine, we meet the ladies on the RV during Lisa Nicole Cloud and Dr. Heavenly Kimes‘ verbal altercation. “Put this trifling-a** b****, off my g*ddamn RV!” Lisa screams while trying to keep her balance. Heavenly is yelling to put her off the bus, and a war of words is exchanged. Lisa Nicole makes a statement that Heavenly’s dentistry business only has a two-star rating. Yikes! In her confessional, Quad Webb-Lunceford searches and finds that Heavenly’s business has a three-point-nine score. Either way, that ish was funny. Dr. Simone Whitmore takes Lisa Nicole to the back, to allow some space between the two women. Receiving a break from the chaos, the ladies settle down and begin enjoying their RV ride.

Soon enough the women stop by a gas station to refill on gas, and Dr. Jackie Walters is having the worst time figuring out the gas pump. Heavenly is admiring Quad’s butt on the bus, and then Quad decides to head into the store for a snack. Back on the road, Dr. Contessa Metcalf begins a conversation about stripping and being sick of working hard. Before long, the ladies go to their respective spaces before arriving on Jekyll Island. Exhausted and not in the mood for anything else, the women check into the hotel and head to bed. Looks like the drama has ceased for the time being. 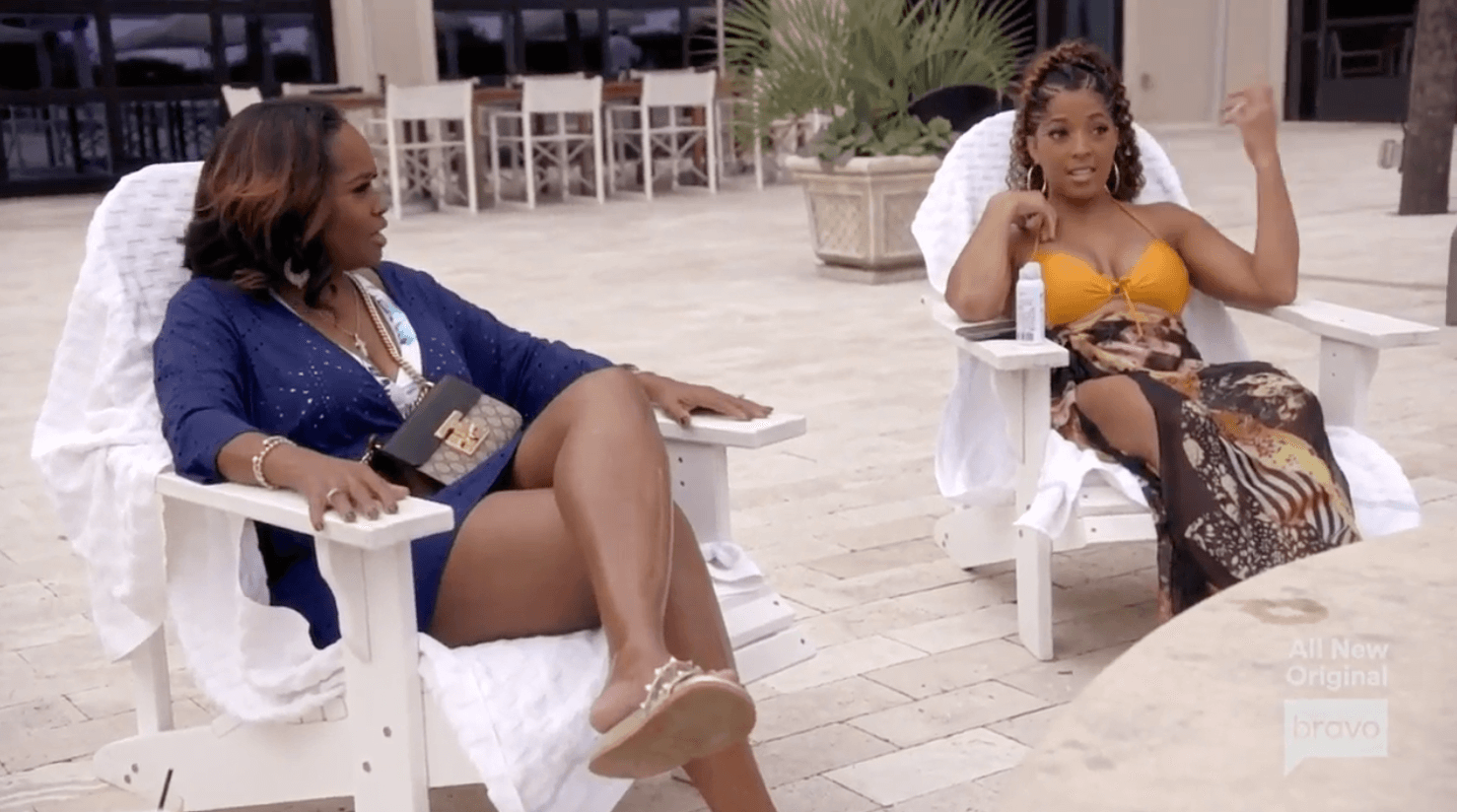 In the morning, we see the beautiful resort and waves of the island while everyone checks in on their families. Heavenly and Jackie are rooming together and ruffling through Heavenly’s candy stash. Jackie brings up the lack of relationship between Toya Bush-Harris and Dr. Heavenly. Not taking rejection well, Heavenly isn’t in the space to forgive Toya right now. Heavenly feels like Toya talks a lot of mess and then gets offended when someone responds. Heavenly’s not wrong, but she ain’t right either. We see Lisa Nicole and Kari Wells walking on the beach, while Toya calls Eugene Harris to check in. While discussing the argument with Eugene, Heavenly comes out to sit with her. Giving Heavenly her compliments, Toya seems to be opened to having a conversation to squash their issues. Toya explains to Heavenly how much they looked up to Heavenly and Dr. Damon Kimes, and how grateful they are to have had Heavenly and Damon mentor them. Heavenly admits that she is proud of Toya and that she apologizes for talking about Toya behind her back. Heavenly seems to understand how important it is for Black women to uplift each other. Let’s hope this good energy lasts longer this time.

Quad, Jackie, and Contessa take a walk around the resort as they reminisce about the ride to Jekyll Island. Stopping them in their tracks, Contessa confides in Jackie and Quad about her recent revelation about Dr. Scott Metcalf. Summarizing that Scott has had a “life coach” for seven-eight months and that he doesn’t pay her, clearly shocks both Quad and Jackie. Contessa doesn’t want a divorce; she wants to heal the relationship, but she feels like her head is in the sand. Contessa’s not happy with the quality of their relationship, and now their issues are beginning to affect the kids. One of their kids said, “Daddy has a girlfriend,” and Contessa doesn’t know why she keeps saying that. Goodness, this is heartbreaking. Both Jackie and Quad have experienced infidelity and want to give Contessa the best advice without being jaded. 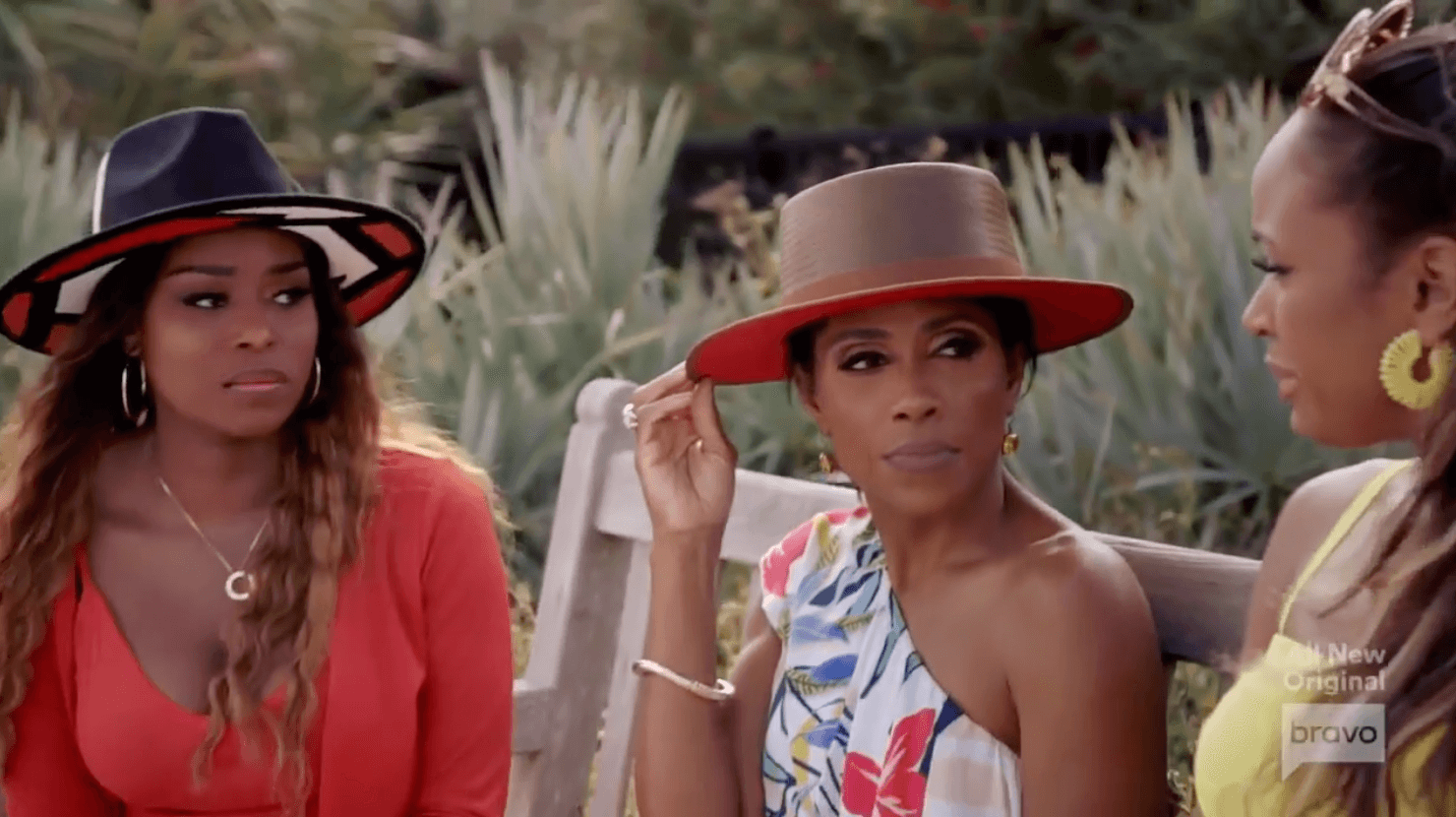 Contessa feels if she waits it out that Scott would eventually come around. Emotional and confused, it’s hard figuring out what she wants. Not wanting to throw away her entire marriage over a speedbump, Contessa is willing to fight for her marriage. Is Scott willing to fight, though? Simone and Jackie meet up to have cocktails downstairs as they wait for the rest of the ladies. Masks and drinks in hand, the ladies are ready to let loose and enjoy their night. Toya shares a text that Eugene sent about their neighbors’ Trump yard signs, which sparks the conversation of how Black people have been demonized in this country. The one thing about these women is they can have fun, but they will always discuss issues that are important in society.

The ladies are having a great time and are happy with their rooms. Heavenly, Lisa Nicole, and Kari join the rest of the ladies as they call Anila Sajja to check in. Toya gets the ladies talking by asking if they would pick their husbands’ new wife, in the event of their death. I think we all know the answer to this. Anila arrives and everyone is pleased to see her, except Toya. No surprise there. Everyone cheers and starts to get ready for dinner tonight. In Simone’s room, Jackie and Quad inform Simone about Contessa’s revelation about Scott’s life coach. Realizing how much of a problem this is, Simone is disappointed and worried about their marriage. In Contessa’s room, she’s video calling Scott and the kids, when once again the jokes about “Scott’s girlfriend” begins. Attempting to make light of the situation, Contessa asks Scott to start correcting the kids when they say that. Scott’s all laughs and giggles and truly doesn’t see the damage being done here. 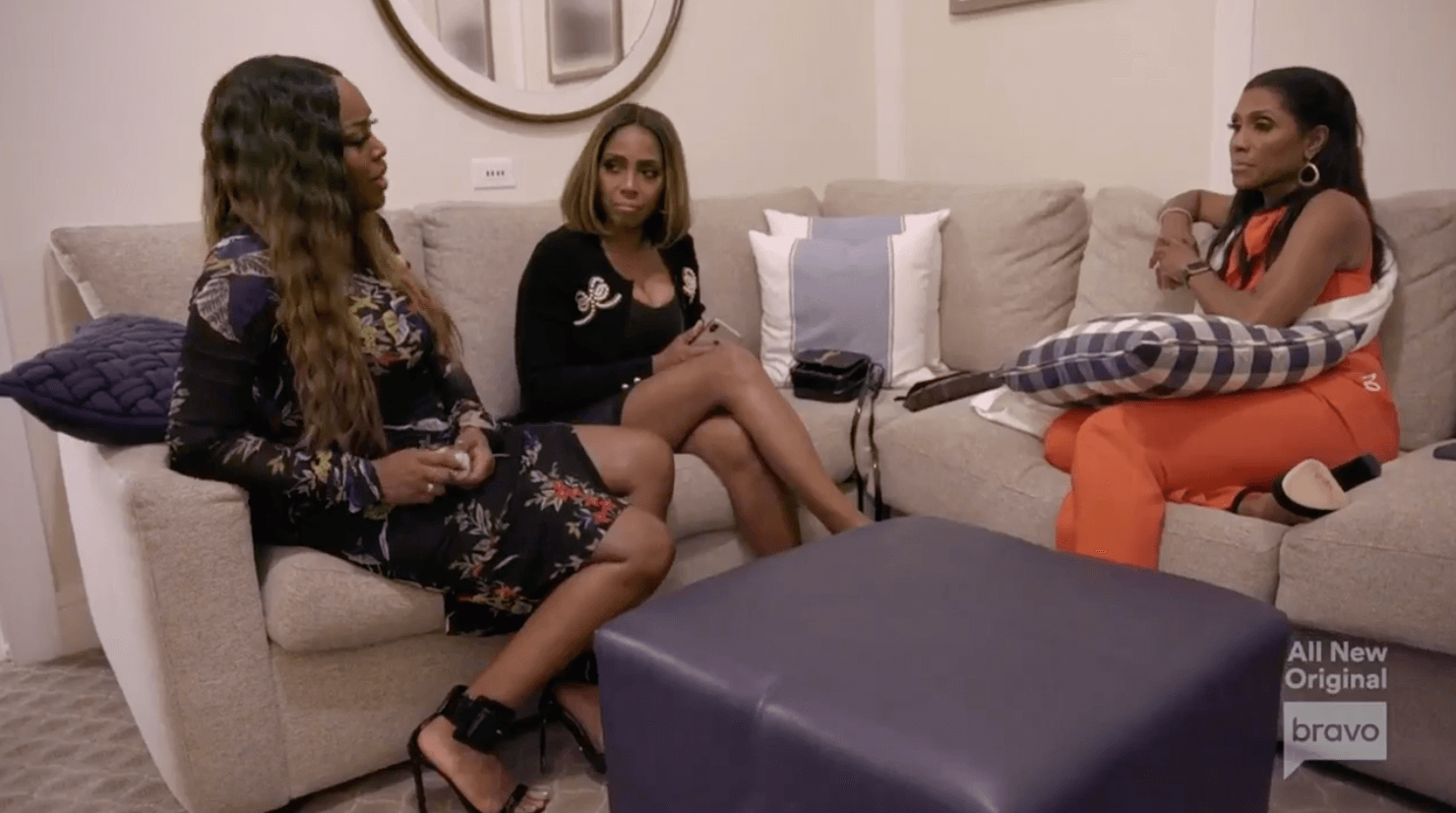 Back in Simone’s room, Jackie, Quad, and Simone want to come up with a plan to help Contessa and Scott. Quad suggests bringing the men to Jekyll Island, and honestly, I think that’s the only way to put Scott on front street and get some answers! Loading up in a golf cart, the ladies finally head to dinner. Met with champagne at the door and a beautiful table, Kari asks Simone how she’s doing with Michael being away at college. Simone enjoys having some quiet time, and the ladies exchange small talk before Heavenly gives Toya her flowers in front of everyone. Kari introduces a new game where the ladies write down a rumor that they heard about one of the other ladies. Let’s see how this goes. The first card questioned Toya’s sexuality while flashing back to the reunion, where she admitted having a creative sex life before Eugene.

Here’s when the mess hits the fan! Kari reads “Rumor has it that Anila does not understand how to budget”. Lord, the night was going so well, wasn’t it?! Anila tries to laugh it off as she asks Toya if that’s her handwriting. Toya says she didn’t write it, but now the question is who did? The next rumor revealed that in D.C., Anila had $400 stolen from her. Anila says she doesn’t think anyone stole from her but makes a point that Kari and Lisa Nicole got ready in Anila’s room. Lisa Nicole is adamant that she didn’t steal anything, and that Anila lost it. Before long, Lisa Nicole and Anila are into it! Lisa Nicole tells Anila to grow up, while the rest of the ladies sit back and enjoy the show. Dismissing Anila, Lisa Nicole is not giving Anila the time of day with her assumption. Anila knowing the assignment brings up how Lisa Nicole hasn’t paid her for the blog shoots yet. Lisa Nicole asks if Anila has sent an invoice and since she hasn’t, why would she expect payment? 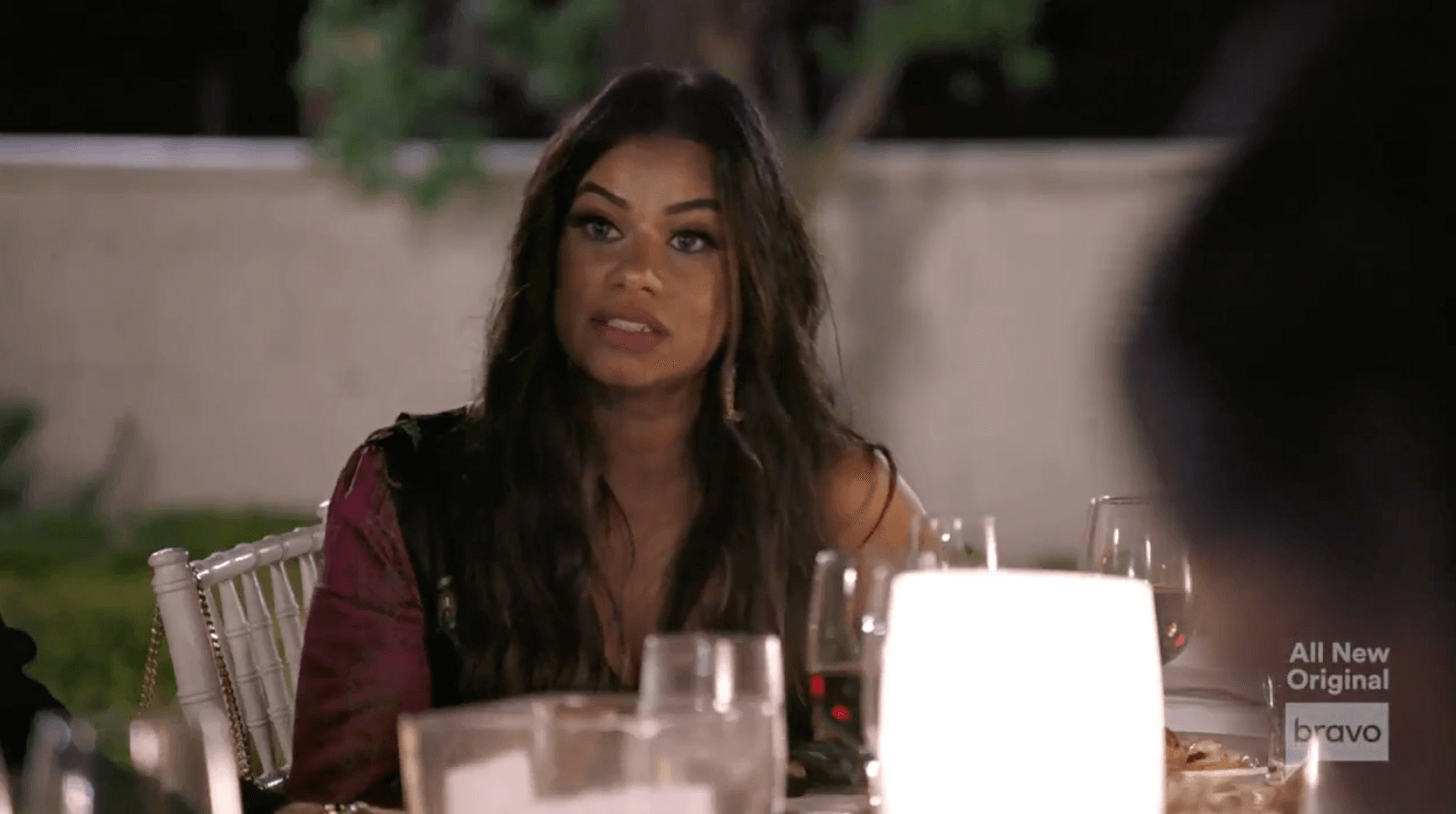 Lisa Nicole says that the two of them never discussed payment and that she hasn’t seen Anila’s Instagram story. A flashback shows Anila showing Lisa Nicole one of the pictures, but there was no discussion of payment. Quad asking the important questions, wonders if Anila gave Lisa Nicole her rates. Anila states that she and Lisa Nicole had a verbal agreement, but that isn’t flying with the ladies. These women are doctors and understand if you don’t send your patients or clients a bill, then you won’t get paid. Lisa Nicole brings up that she expected Anila to post the blog to her feed and Anila interrupts her before she can finish the sentence. The two argue back and forth, while Simone laughs at Heavenly for rolling her eyes at Lisa and Anila. Anila agrees to send Lisa Nicole an invoice before Kari flips the conversation to Anila and Toya’s beef.

Still heated from her verbal fight with Lisa Nicole, Anila promptly says that she’ll talk with Toya separately. Tipsy Toya is shocked by the sudden outburst before Quad tells Toya how hurt Anila really is. Anila felt like Toya was talking about her around the neighborhood, and it embarrassed her. Toya says that she’s tried to be the best friend she can while introducing Anila to her core group of friends. Heavenly admitted that Anila did call around to the other ladies, in hopes of mending their friendship. Anila is upset because Toya doesn’t see that she’s the one that’s hurting in this situation. Sensing no resolution in sight, Jackie rounds up the ladies and dinner is officially over. Be sure to come back next week, for the Season Finale of Married to Medicine! You don’t want to miss it!