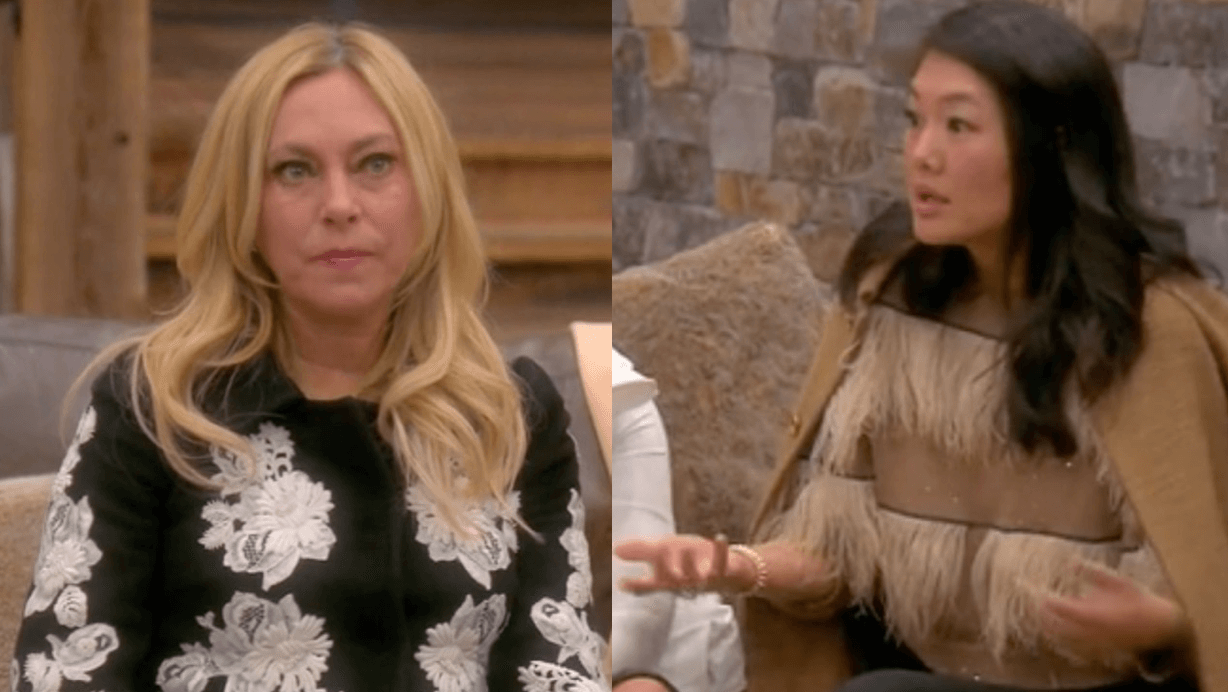 As The Real Housewives of Beverly Hills Lake Tahoe getaway continues, Sutton Stracke and Crystal Kung Minkoff continue to argue. Their disagreement ended at the last episode when Crystal asked Sutton, “Are you that girl? I don’t see color.” Sutton is really upset. She doesn’t understand why it’s bad that she doesn’t see color. When Sutton says she doesn’t see culture, it means, to her, that she sees all people as equal. Kyle Richards tries to mediate. When Crystal hears those words, I don’t see color, Crystal isn’t thinking that Sutton means that everyone is equal.

Crystal says that “the generation above me was taught to be colorblind. And Sutton’s 20 years older than me.” Note: Sutton is only 12 years older than Crystal. According to Crystal, “that perspective is outdated.” Crystal says that “we can agree to disagree,” but Sutton wants to know “what are we disagreeing on though.” Crystal is dismissive and rolls her eyes like a teenager getting lectured from a parent. They do agree to go to bed.

As the women check in on their children and gather for the morning, Sutton says that Kathy Hilton came into her room around midnight with “her fan and like eight pillows.” Then Kathy went to Kyle’s room, getting Kyle’s bed and ate chips and drank a Red Bull and read the newspaper, keeping Kyle awake. 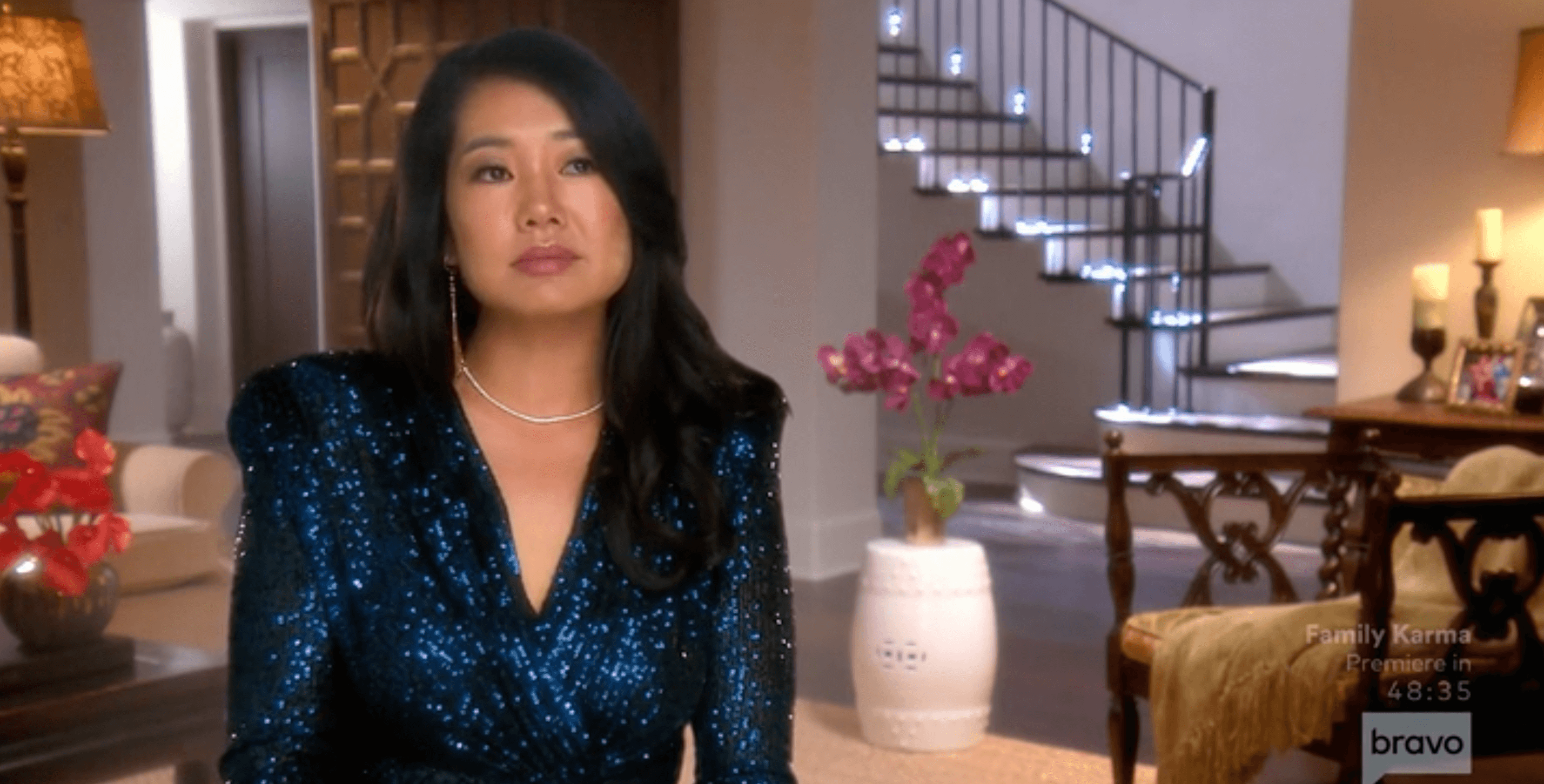 Sutton goes to talk to Crystal in her room. Sutton feels like Crystal insulted her. Crystal relays a racist event that scared her in her past when she was a child. Each try to listen to each other’s perspectives. They agree that racism is a “big topic.” They agree to hug it out. Kathy tells Kyle “leave me alone” when Kyle tries to wake her to go on the railbike adventure at V&T Railways.

The ladies pair up by those who want to be in a “fast car” and a “slow car.” Kyle, Sutton, and Garcelle Beauvais are in one railbike—the slow car. Erika Girardi, Dorit Kemsley, Crystal, and Lisa are in another railbike—the fast car. In the fast car, they decide not to hit the brakes going downhill. On the drive back to the house, Crystal and Sutton talk about their parents. Sutton says that her mom “is a piece of work.” Crystal tells Sutton that she used to feel that way about her own mom, but mom calmed down when dad passed away three and a half years ago. Sutton tells Crystal that her father committed suicide 18 years ago. They have a bonding moment over their losses. 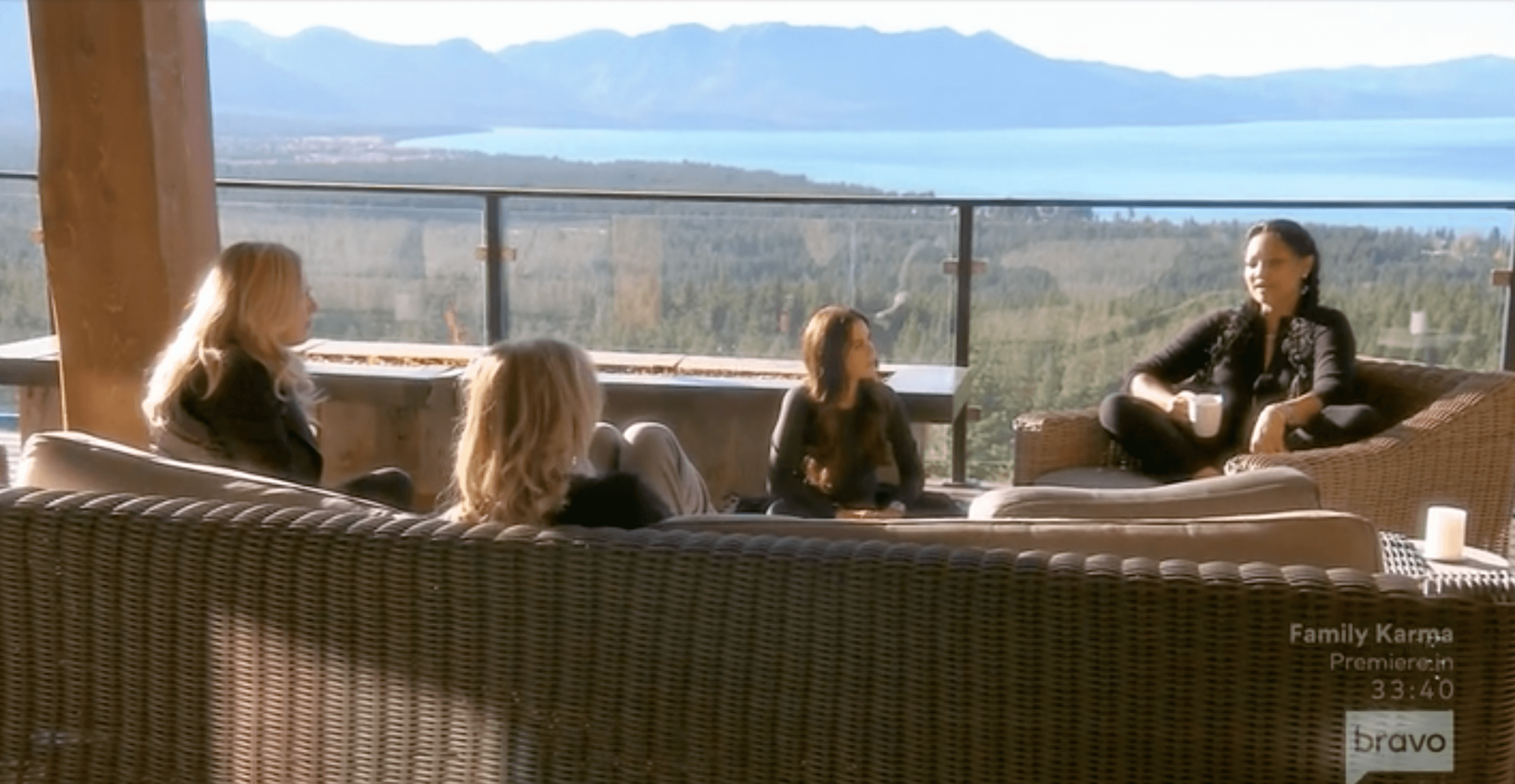 As they arrive back to the house, they find Kathy roaming around having put ear drops in her eyes. They need to get ready for dinner out, and Sutton doesn’t want another long drive. Garcelle says, “You are like a princess with a pea under your mattress.” Erika says that she’s easygoing. And that cracks up Lisa and Sutton. Garcelle thinks that Erika just doesn’t “give a f-.” Erika says, “I’m really content to let people be who they are. Because I like to be myself.” She goes on to say, “That’s one of the one things I love about Tom the most. He lets me be myself.” As Kyle enters the conversation, the discussion turns to Sutton’s slippers that cost $2000.

As some of the women go to take naps before dinner, Kathy tells Kyle that her hair looks beautiful in the sunlight. Kyle says that she, her daughter, Farrah Aldjufrie, and Kathy’s daughter, Paris Hilton, all genetically are similar to her mom. Garcelle says that Paris came on “The Real,” and surprised everyone with her voice. It was a different voice from when she was on TV many years ago. Kathy says that Paris is more confident now. And Garcelle says, “She used to drive me nuts. I used to see her at fashion shows and parties and she was always on her phone.” Kathy says that Paris would act like that because she was uncomfortable and shy.

Garcelle and Lisa are on time, and the rest of the group is late getting ready for dinner out. The two of them have an awkward conversation about the weather, the ceiling beams, and finally Kyle arrives along with the other women. 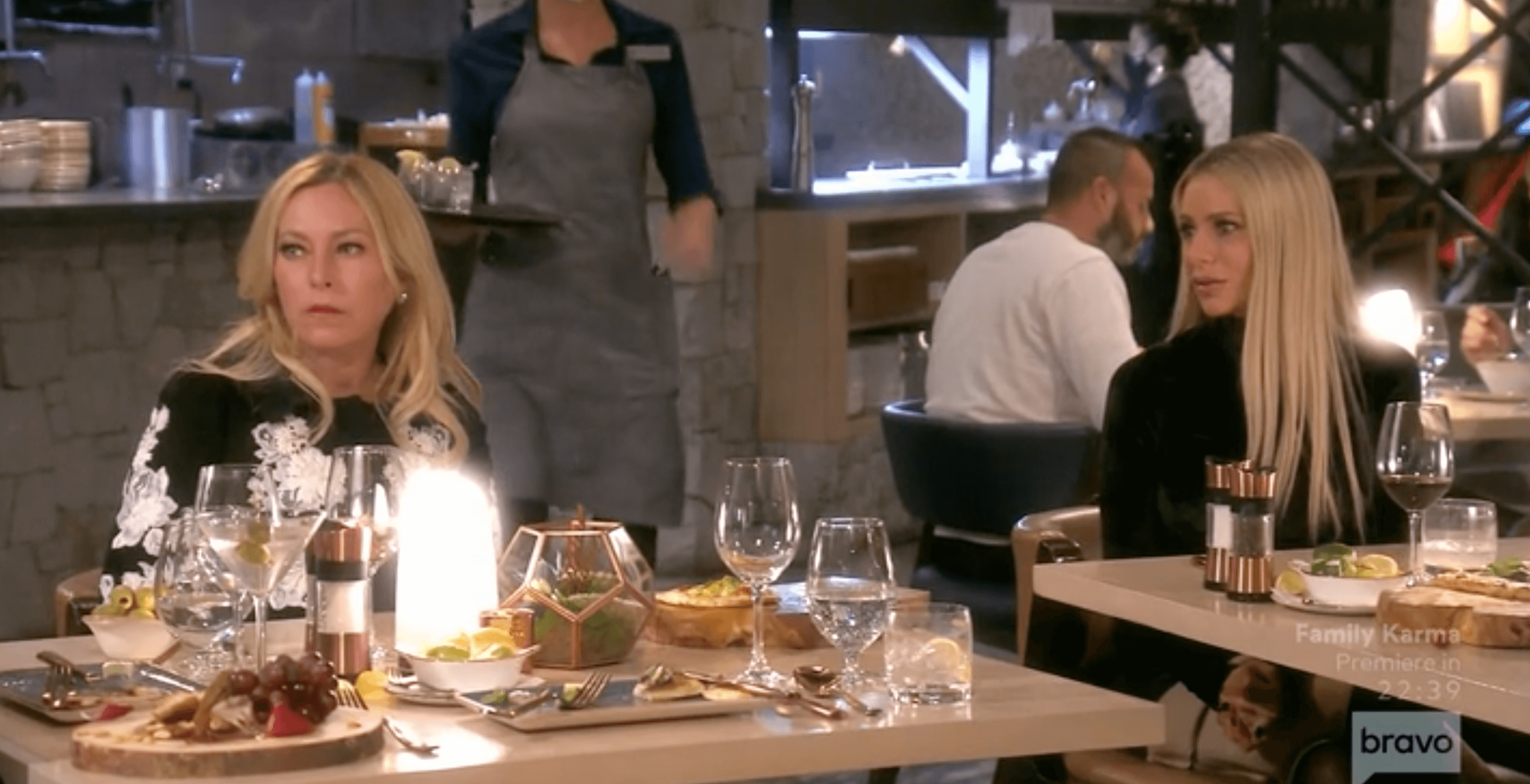 At dinner, Kathy makes a toast to Lisa for planning the lovely trip. They are enjoying being in a restaurant after such a long stay-at-home for quarantine. Sitting so far apart from each other, they struggle to have conversations. Sutton said that she snacked all the time during the Covid lockdown. Erika says that Tom Girardi brought home Morton’s every day for about 3 months.

Lisa is talking about launching her own lip line for Rinna Beauty. The box opens and it says, “Own it.” Perfect. At the table, Kathy takes a phone call from her husband, Rick Hilton. Sutton relays the conversation about race from the prior evening to her end of the table. Sutton turns to Erika and says, “Don’t you feel like as Southern girls, we always have to defend ourselves to prove that we aren’t racists.” Erika says no. Dorit tries to help by saying that perhaps Sutton hasn’t lived in a world that’s very multicultural, and here we go… Crystal wants to know why they just can’t have a normal conversation. Because they are seated so far apart from each other, they can’t even hear each other to have a full-table conversation.

Because Kathy and Erika switched seats earlier, Kathy seems to have double the martini glasses delivered to her. Kathy and Dorit decide to do “bottoms up” with their martinis. There seems to be some texting going on at the table as they decide to go another “bottoms up” round. It turns out that Kathy pulled a prank, and she’s actually been drinking water with olives. Dorit is in on it. Then Dorit texts Erika and Lisa to keep the prank going to try to make Kathy think that Erika and Lisa are drinking real martinis. 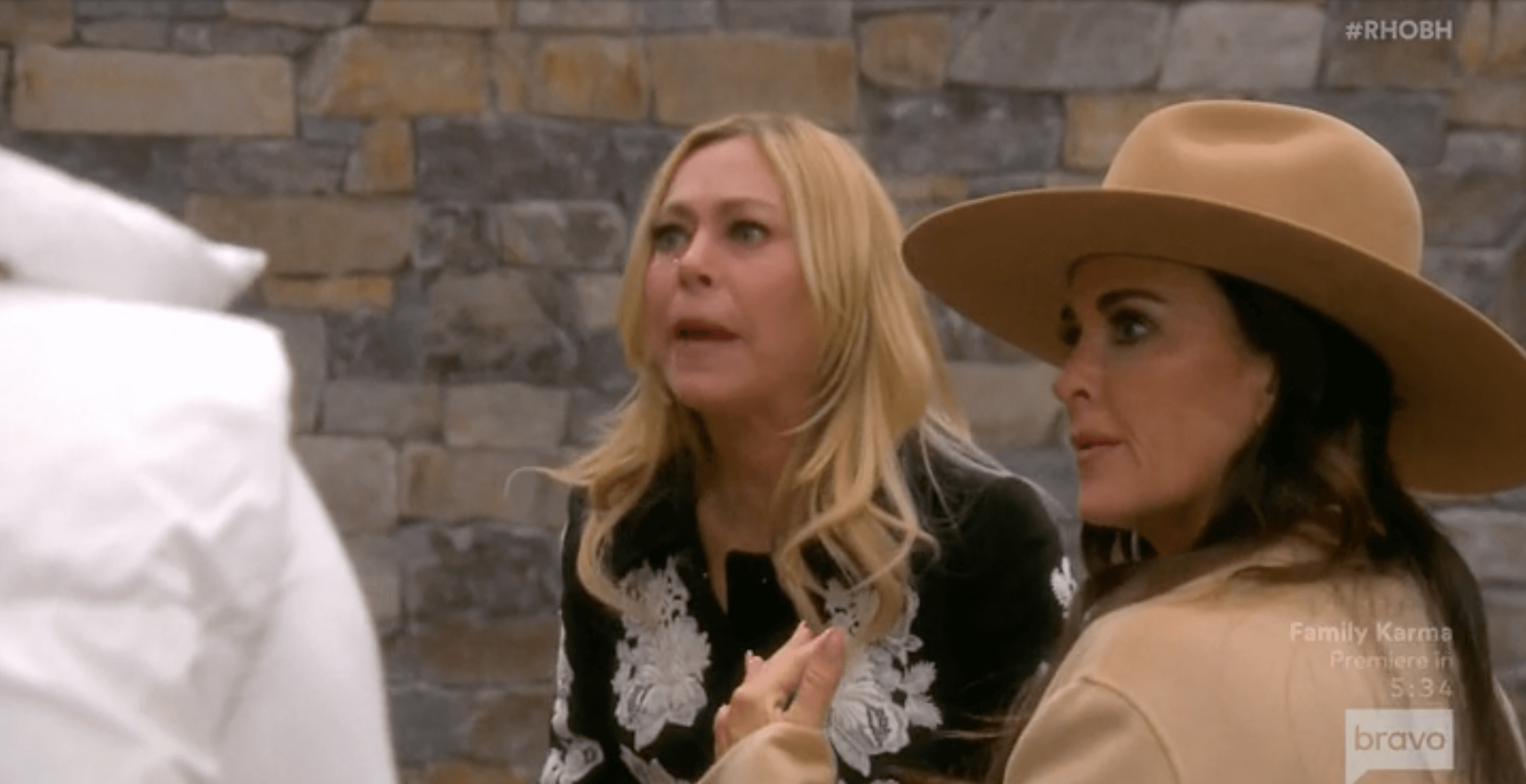 As they leave the restaurant, Sutton is upset that she thinks there was a joke going on and she wasn’t in on it. But Crystal doesn’t want Kathy to know that they were all pranking her. Sutton is overreacting to the table texting feeling that she was left out. Sutton is upset. Garcelle told the group that Sutton felt left out, so now all the ladies assemble in the bear den to sort it out.

Sutton polls the room to find that everyone was in on the joke except her. The women try to explain that there was a prank, then a second prank, and that it wasn’t about Sutton. Crystal goes off and tells Sutton that she is “a ridiculous human being” and it’s exhausting. Kyle tries to tell Sutton that she’s being overly sensitive.

About 34 minutes later, Crystal is in her bedroom on her phone with a friend. Crystal tells her friend that Sutton is “a little bat sh*t crazy.” As Crystal is talking about Sutton, Sutton finds Crystal’s coat in the bear den and decides to be nice and take it to Crystal. Sutton knocks on Crystal’s bedroom door and opens it. To be continued…

Next time, some of the women have fun on a boat on Lake Tahoe. They enjoy the game room and go swimming. Crystal and Sutton continue their disagreements, and Crystal is upset that Sutton walked into her bedroom when she was naked. And some news breaks about Erika.