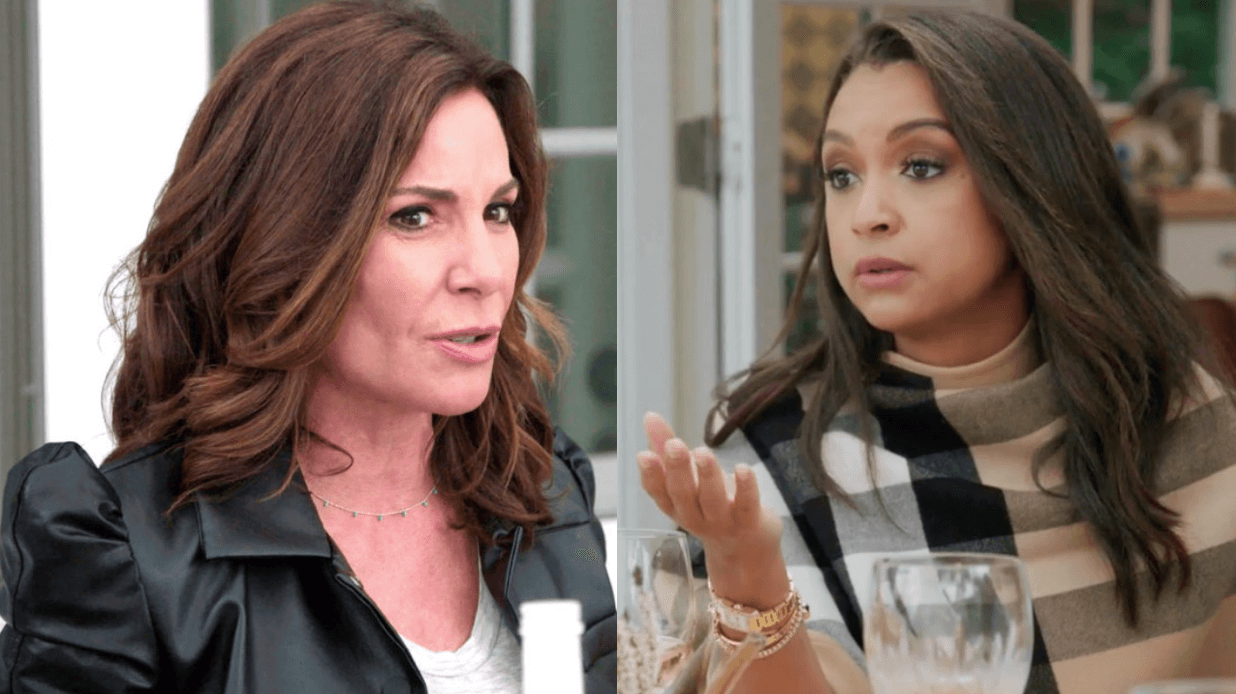 This week on The Real Housewives of New York City, Luann de Lesseps hosts a lunch party at her home in the Hamptons, complete with a nude male model and another heated discussion among the ladies.

The episode continues with the Breakfast at Tiffany’s themed dinner. Ramona Singer is hosting the dinner party, and every time the conversation turns to sex, she pops out of her chair to leave. Ramona asks Leah McSweeney again to stop talking about sex. Leah says, “I’m sex-positive.” Ramona asks Leah to edit what she says. The conversation deteriorates and Ramona lectures Eboni K. Williams about elegance and class as she walks up the stairs with a bottle of alcohol.

The next morning, Eboni and Leah talk about the evening before. Eboni wants to apologize to Ramona for mishearing that Ramona said “she can take a big d.” And then, as if production holds up a cue card, the lecture begins about “respectability politics” where women have to be “these pretty little princesses.” Does anyone wish that this show could just be silly and fun again? 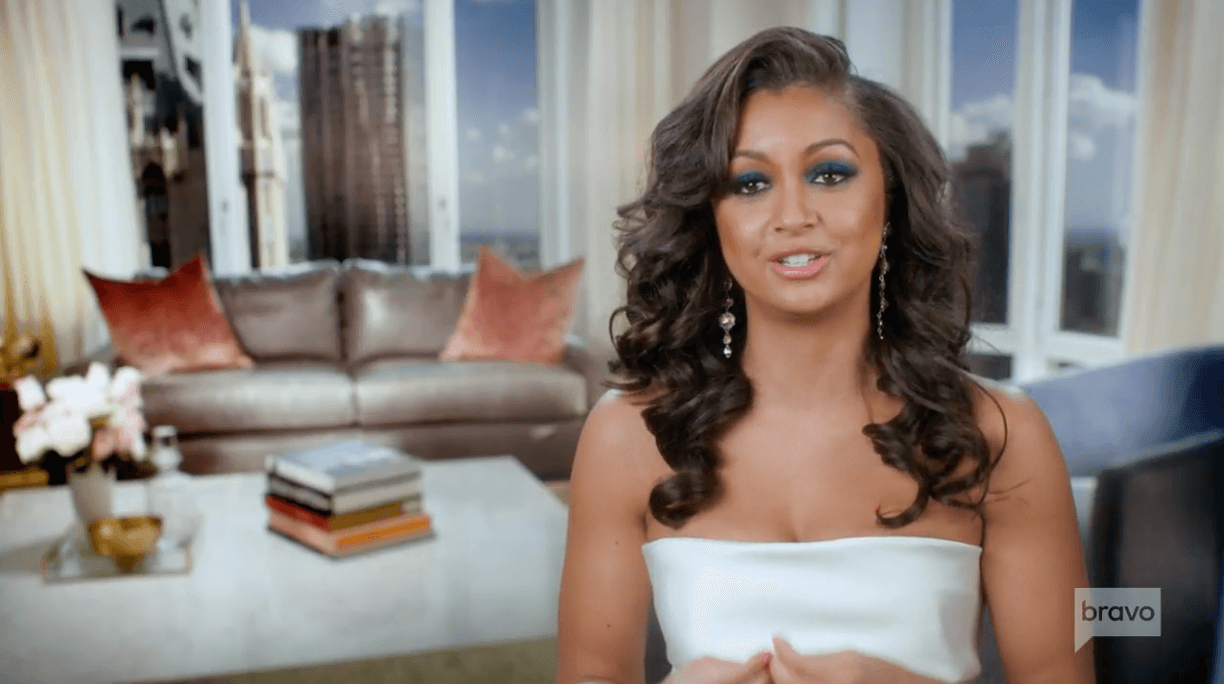 Ramona (still in her tiara) reaches out (in the basement) to talk to Heather Thomson. Ramona tells Heather to not talk about her or any of the women on her podcast anymore.

Luann checks in at her house where her boyfriend Garth Wakeford is making the lamb curry and Luann’s niece Nicole Nadeau and daughter Victoria de Lesseps are helping prepare for the day. Fun fact: In an article from The U.S. Sun, Nicole is auctioning off a painting where she used resin to replicate semen.

Back at Ramona’s house, Leah and Eboni are getting glammed in hair and makeup, making everyone wait. When Ramona talks about how they are late and it’s rude, Eboni brings up race again. “As a black woman, my hair situation is quite different than yours.” She goes on to say, “I can’t get it to the texture it needs to be by myself.” Then Eboni talks in her solo interview about 1865 and the Emancipation Proclamation and how she’s free. And no one can tell her what to do with her time. Is it ok to make light of the historic change of legal status of slaves, and make it about your own poor time management? Ramona, Sonja Morgan, and Heather leave Leah and Eboni behind to head to Luann’s house. 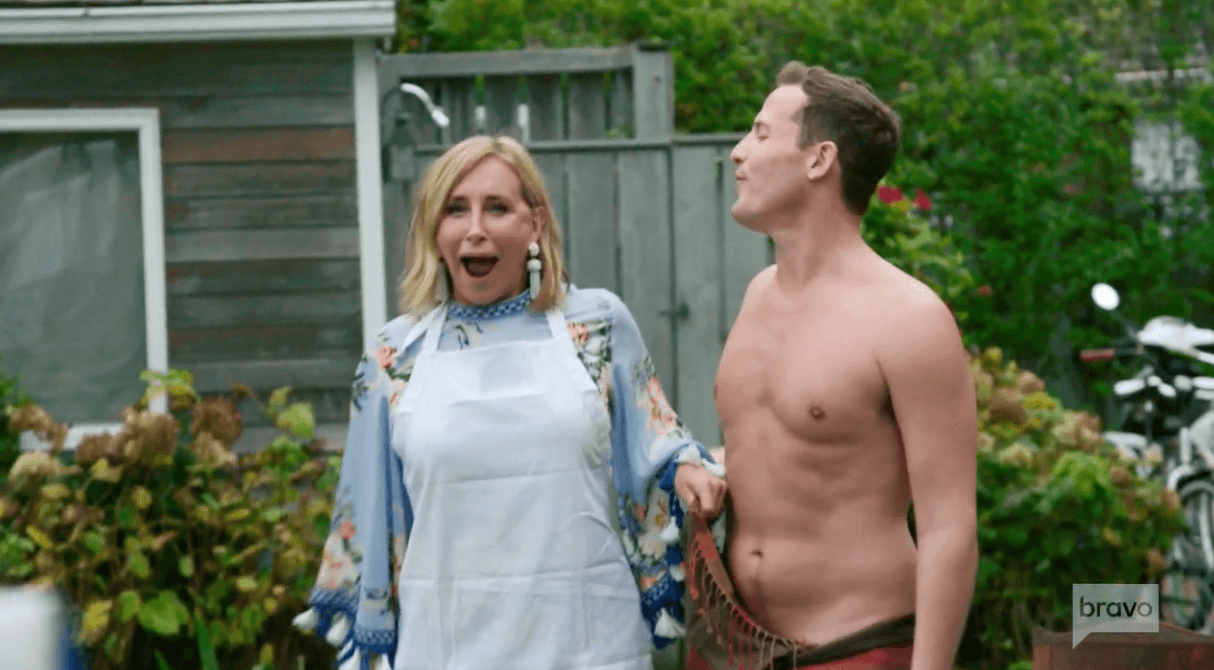 As Eboni and Leah finally arrive, Garth takes his leave. The male model arrives, and a musician, Alfredo, arrives. Luann is trying to fix up Alfredo with Sonja, but he’s not her type. Sonja says that Luann doesn’t know her at all. “I’m not into artists at all. I’m into bankers.”

Kurt the Nude Model is ready to be painted. As he walks out to the backyard, these cougars can’t get enough. Sonja volunteers to help him disrobe. The women are so flustered that they can’t remember they are supposed to paint a series of one-minute poses. Ramona stops painting to “enjoy the view.” Then Leah runs out of steam and quits. Ramona seems to be into Alfredo’s music in a weird, flirty way.

Leah is struggling with her grandmother dying. Ramona tries to support Leah. And Eboni talks Leah through the moment. 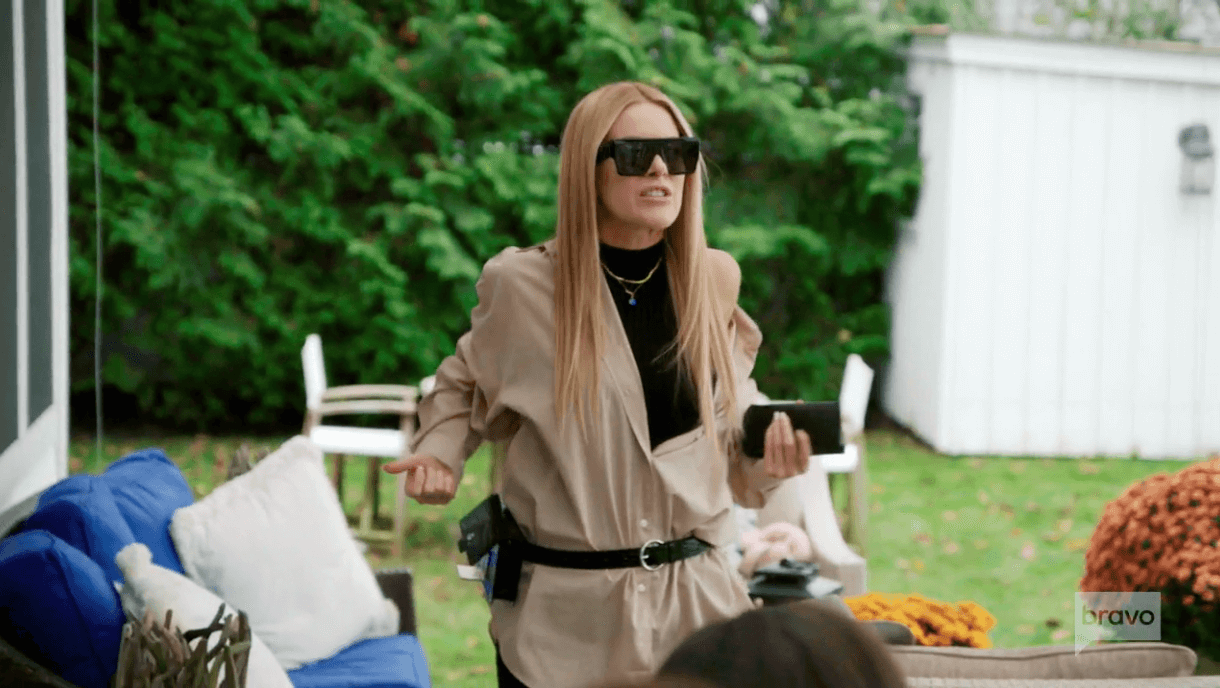 During the lunch, the ladies enjoy Garth’s lamb curry. Then Luann asks about what she missed last night. Eboni says that she was using language that Ramona doesn’t like. Leah says that Ramona doesn’t like the way she talks about sex. After some discussion about backgrounds and boundaries and bringing up the conversation last year where Leah met Ramona’s daughter, Leah blows up again and leaves the table. Ramona thinks that Leah is being overly sensitive since her grandmother is dying.

Eboni says that she doesn’t like when people say that the particular words used in a conversation make you “unclassy” or “not a lady.” Then Luann chimes in, “It has nothing to do with class. It has to do with education.” And Eboni gets heated saying, “It doesn’t have anything to do with education, Lu. I have more education frankly than anybody at this table.” Then this argument is interrupted by the return of Leah. Where are the Herman Munster shoes? 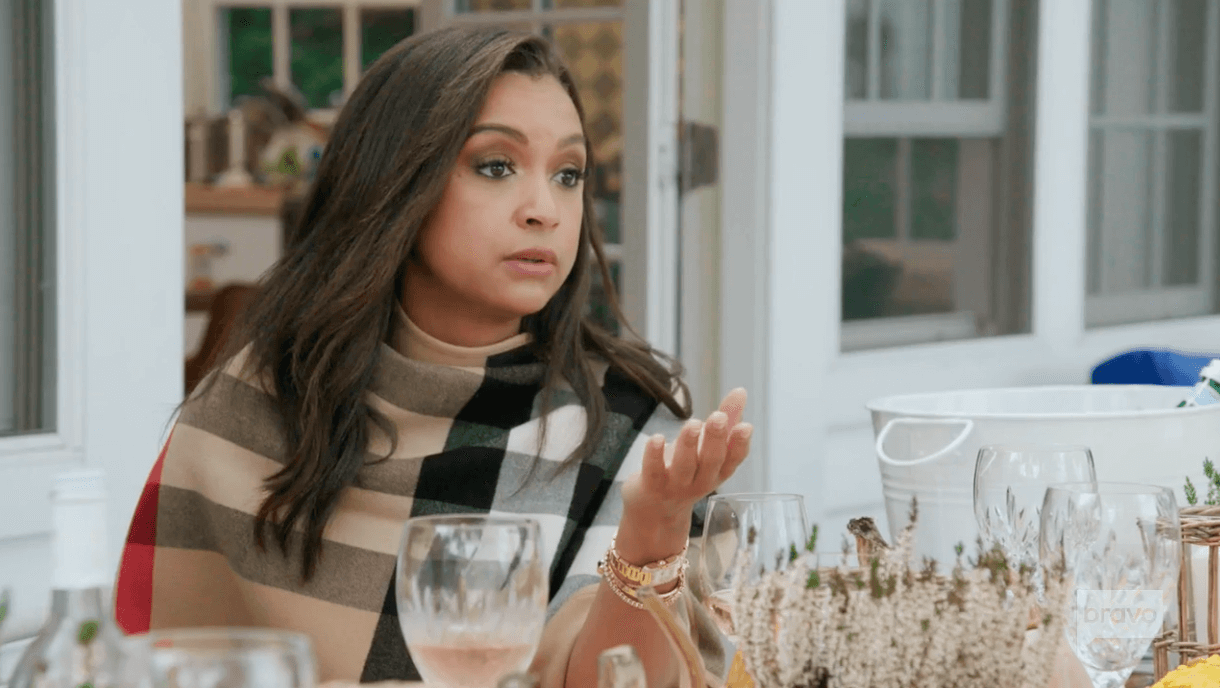 Heather wants everyone to listen to each other. Luann says, “I just tried to explain it, and I think I was pretty clear, for an uneducated person.” Then it’s Eboni’s turn to throw a fit. Eboni says, “No one said you were uneducated.” Then Luann talks about speaking three languages being well-rounded and well-traveled versus formal education. Luann goes after Eboni for thinking she’s “the smartest girl in the room.”

Then Eboni lectures, “White fragility is when white women…” and she’s interrupted by Ramona going off and leaving the table. Then Luann asks, “Why are you getting so angry? Why are you yelling right now?” And Eboni says, “And now I’m the angry black woman, Luann.” Then it continues when Luann says, “You’re an angry woman right now.” And Eboni seems to conflate that into the assumption that the group is upset with her because she’s angry and black and not upset with Leah because Leah’s angry and white. 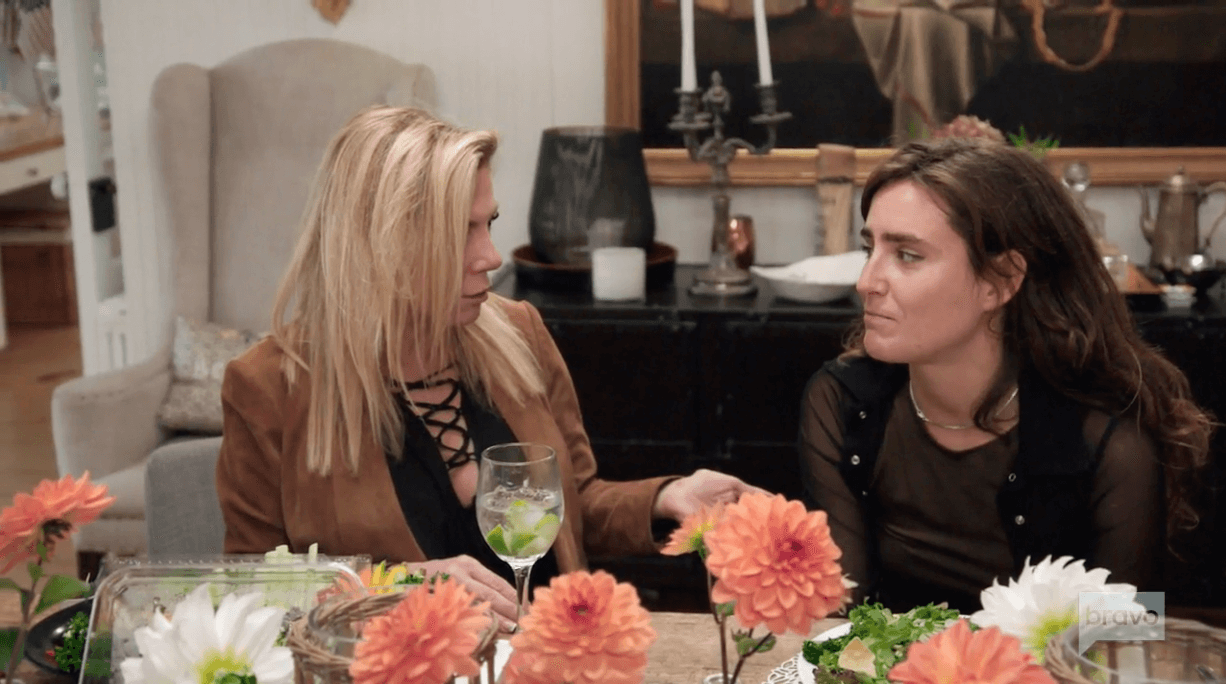 Ramona wanders off and has the most uncomfortable random discussion with Luann’s daughter Victoria, niece Nicole, and Kurt the Nude Model.

Next time, Eboni recounts to Leah that Luann called her an “angry black woman” (when that did not happen). The women go fishing. And Leah, on the balcony yells at Heather for being “a Karen.” What on Earth is Leah wearing? It looks like Leah’s neck is slit and she’s bleeding all over.