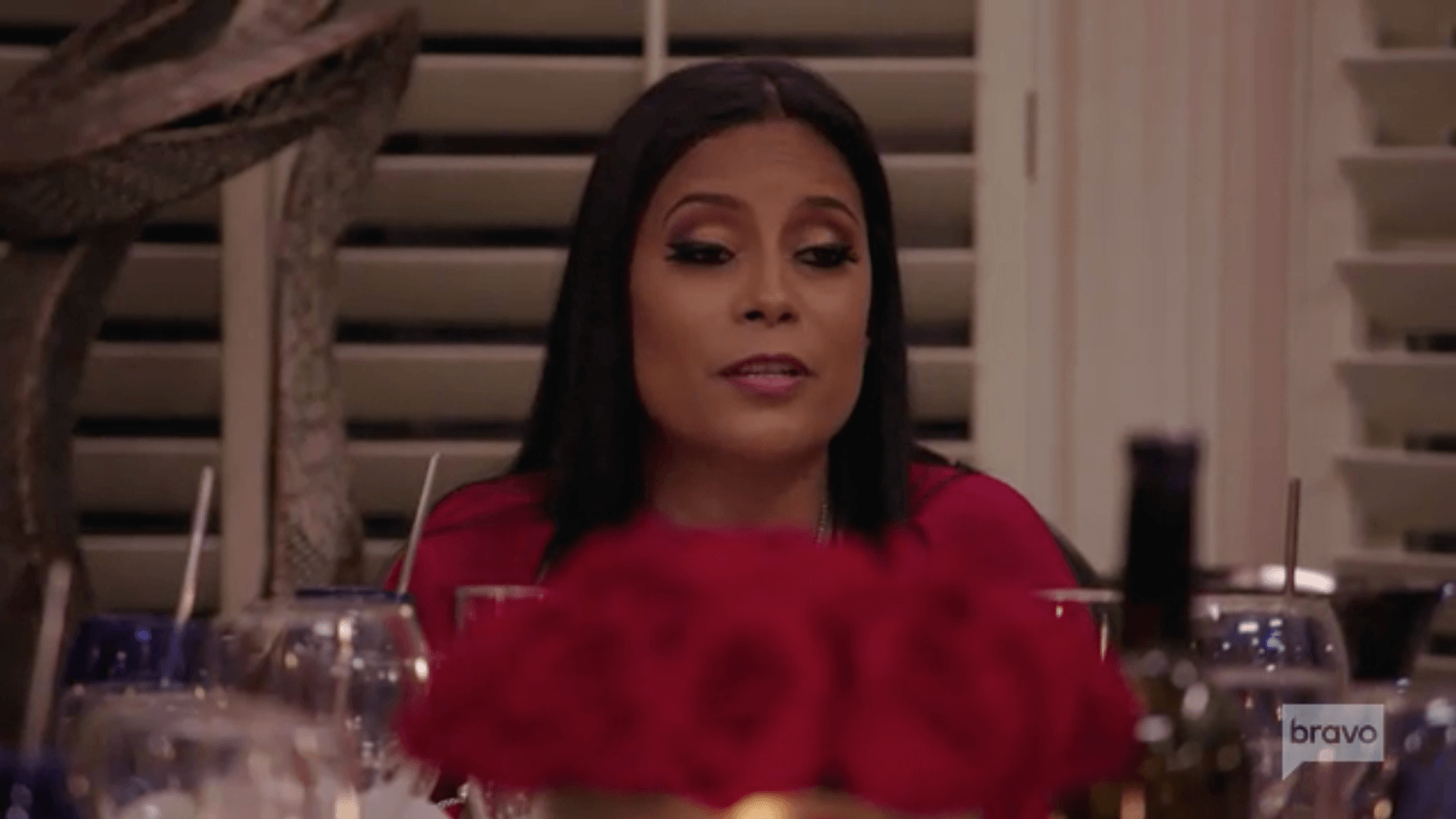 This week on a brand new episode of Married To Medicine, we see Dr. Jackie Walters at her office, while Toya Bush-Harris takes some glam photos at home.

Dr. Simone Whitmore is working, while Cecil Whitmore invites Dr. Eugene Harris over for a drink. Cecil enjoys having company over, and the virus put a hold on his social activities. Eugene thanks Cecil for inviting them to their couple’s night, before navigating the conversation about Dr. Scott Metcalf.  Recognizing how things could’ve went left, the two men commend Dr. Contessa Metcalf and Toya for keeping things cordial. Scott arrives to join the small gathering, while reminiscing about past arguments.  Scott brings up how he interviewed a potential new worker, but she’s too bad; and Contessa won’t let her work there.

Looking caught off guard, Cecil and Eugene are uncomfortable with where this conversation is going. Then, Scott had the nerve to show them a picture of this young lady….in his phone. Cecil being a husband for over 20 years, recognizes how bad this situation can be, and in his confessional he says, “That’s not Husband 101”. Making light of the situation, the men attempt to shift the conversation into safer territory. The men discuss the possibility of Scott agreeing to couples counseling. Scott doesn’t want to take orders from Contessa; and seems to blow off the importance of why they should go. Cecil gives Scott the real in hopes he’ll change his mind.  Cecil is getting through to him and let’s hope these men can talk some sense into Scott.

At Anila Sajja’s new house, she is seen showing Ms. Gomez around the new house, while discussing the work that still needs to take place. The house is big and beautiful, but sis has A LOT more work to do. As her son wonders around the huge house, Anila gets a glimpse of her new closet! Anila begins to get emotional at the progress she’s made throughout her life. Being bullied about the way she looked, Anila feels gratitude to be successful and show those kids they were wrong. A very real moment, and a conversation about beauty that needs to continue. Simone meets Jackie at her office to catch up, while enjoying their lunch dates again.

It’s so beautiful to see these two back together again! We love to see it. Jackie asks if Simone has talked to Quad Webb-Lunceford. Simone replies she’s only spoke to Quad about the upcoming Go out and Vote town hall; that Simone is planning. 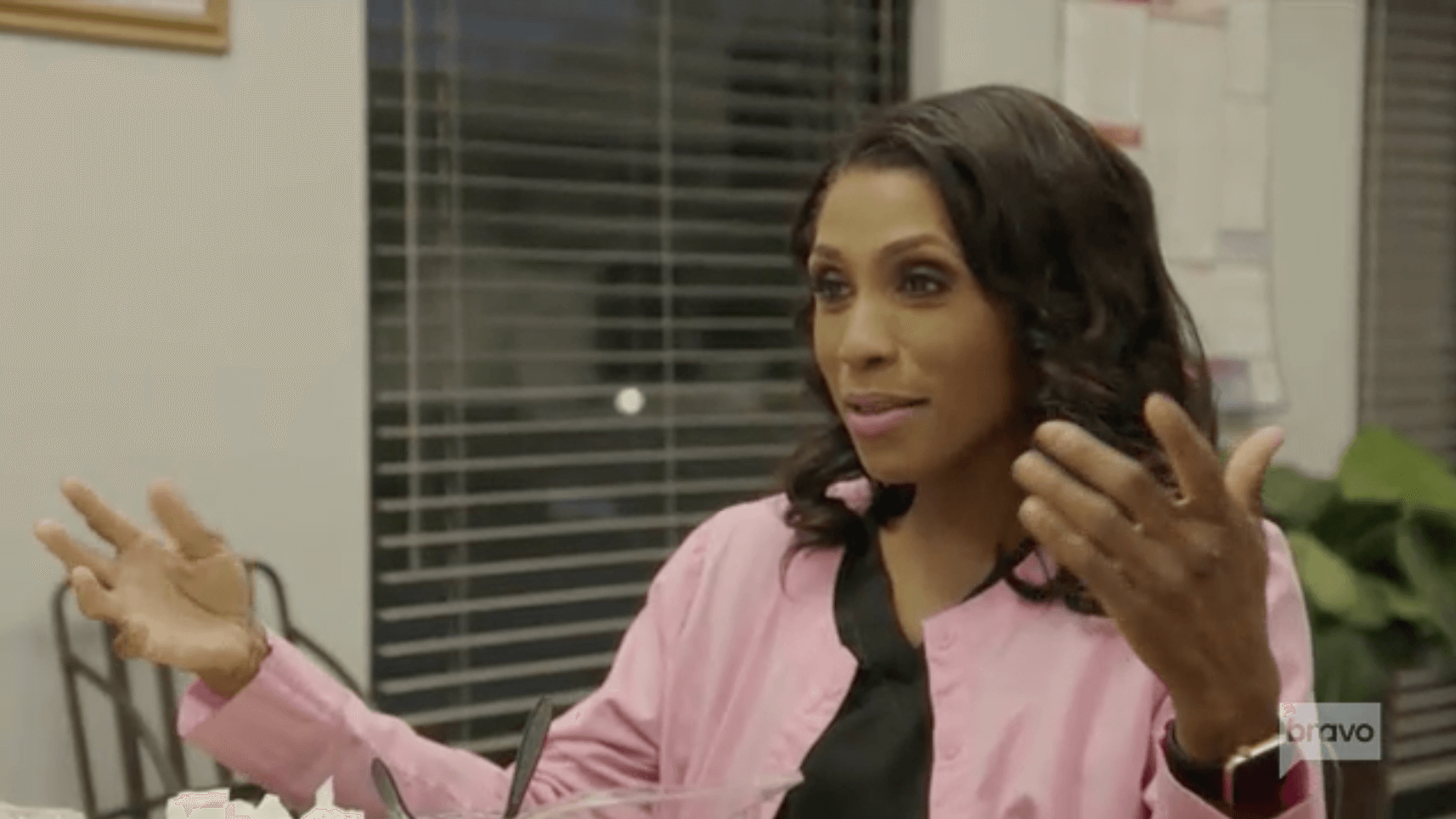 According to Simone, she came up with the idea to plan the town hall but while they were in D.C., Simone made a comment to Lisa Nicole, about keeping the momentum going. Less than a week after they returned, Lisa Nicole asks Simone to be on her panel for what was originally Simone’s idea. Simone wanted to work together with Lisa, but Lisa Nicole took over completely. 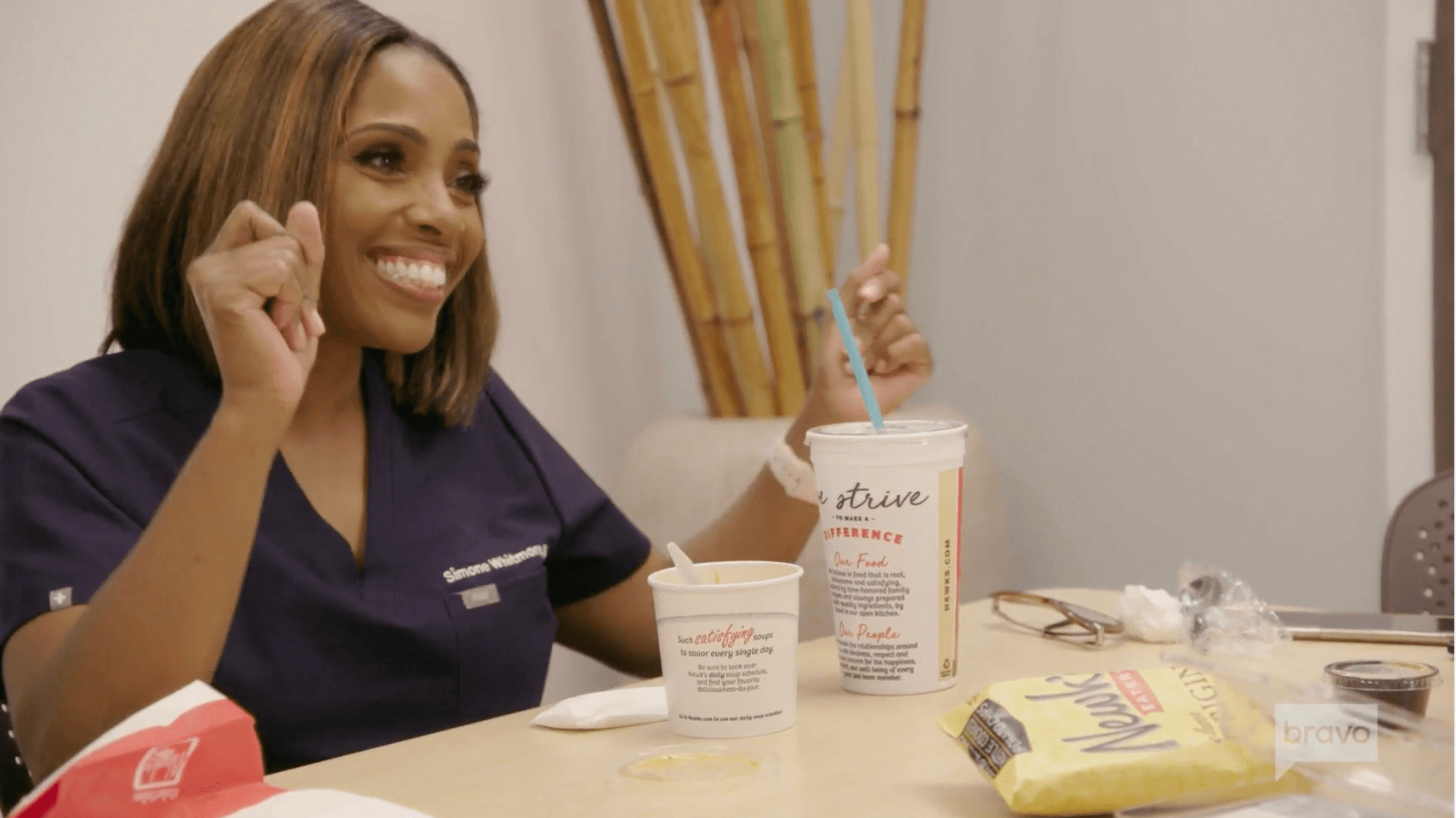 At Dr. Heavenly Kimes new property, her son Zachary is there to show his mom the changes he’d like to make to the house. Once they enter the kitchen, Heavenly realizes her son took some things from her house, while she complains about the cheap wine on display. Zachary begins showing Heavenly the new furniture and staging materials for the property. The two of them go outside for a quick chat, while enjoying the beautiful view. Once Heavenly breaks down the mortgage and how much they will rent the property for; Zachary thanks Heavenly for being such a great mom. Heavenly gets emotional, and it appears she’s validated in her work as a mother. Everything Heavenly does is for them kids, so she’s definitely a great influence and role model for her family.

At Contessa’s office, she invites her life coach over for a quick session. Contessa tells the life coach, that she’s looking for clarity, peace and understanding. Asking Contessa to talk about her childhood and her mom; Contessa uncovers that she feels like she can’t rely on anyone. Since their marriage has been on the rocks for a while; Contessa doesn’t feel like she can trust Scott with her heart. That’s hard enough to come to terms with, and on top of that; Contessa is questioned if she has married her father. Whew…I’m triggered. Contessa feels like she doesn’t have a voice in her marriage; and they are disconnected. The life coach instructs Contessa to give herself grace during this difficult time and begin to do the work with herself and Scott. 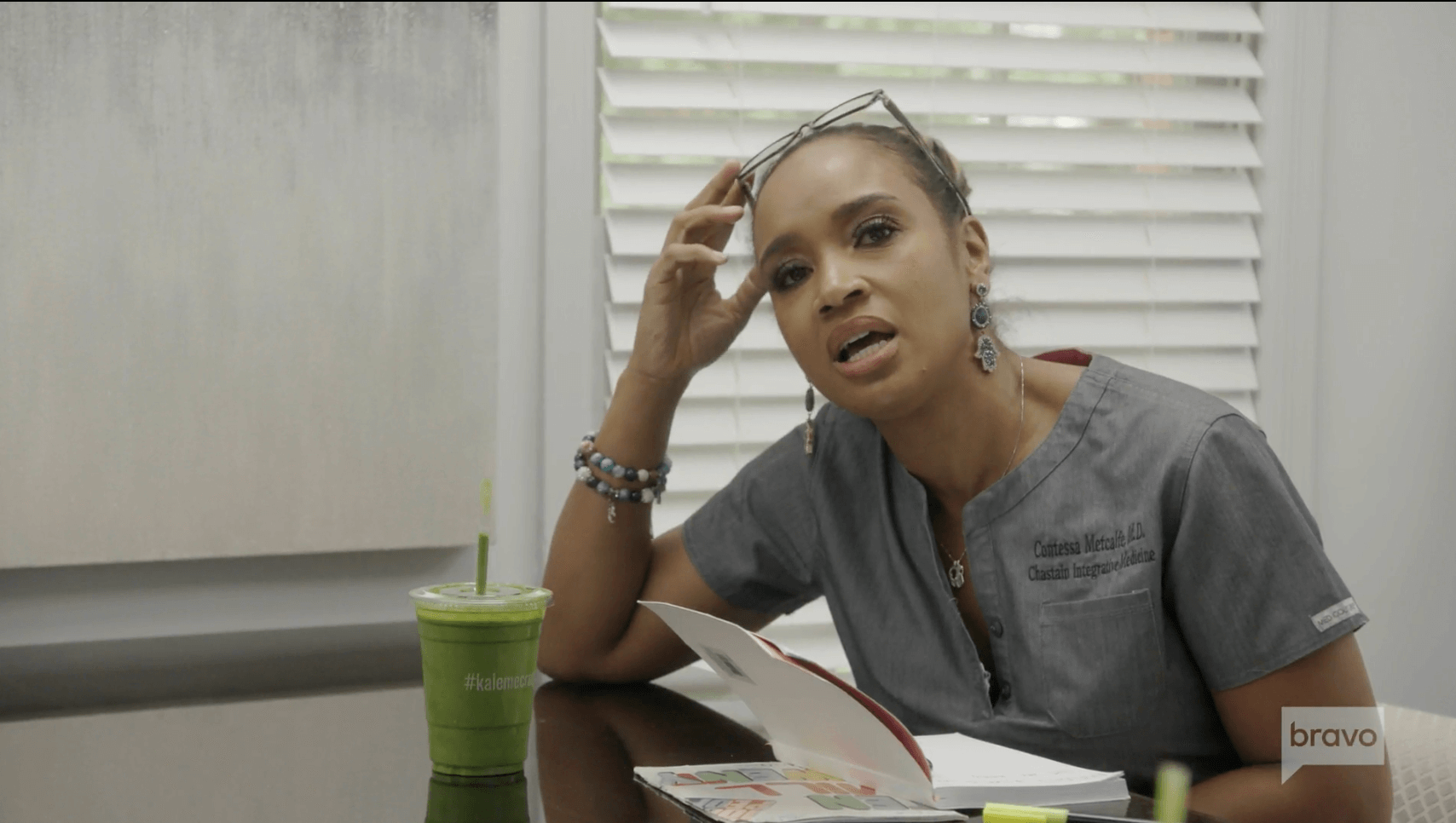 At Anila’s she is preparing her kids for lunchtime, while asking her daughter how school was for them. While Anila fixes Aryana’s hair, Anila asks her about the comment she made to Ms. Gomez. At Anila’s new house Ms. Gomez admitted that Aryana told her she wanted to have white skin, and blue eyes. Aryana admits that’s what she said, and it’s because she believes everyone has white skin. Quickly reaffirming that their skin is beautiful, Anila tries to help Aryana understand how beautiful she is. Anila explains to her daughter that she went through the same thing as a young girl, and that all skin tones are beautiful equally. Tonight, is the Town Hall planning dinner, and it looks like its going to be an elegant event. The table is set, and champagne is being poured. 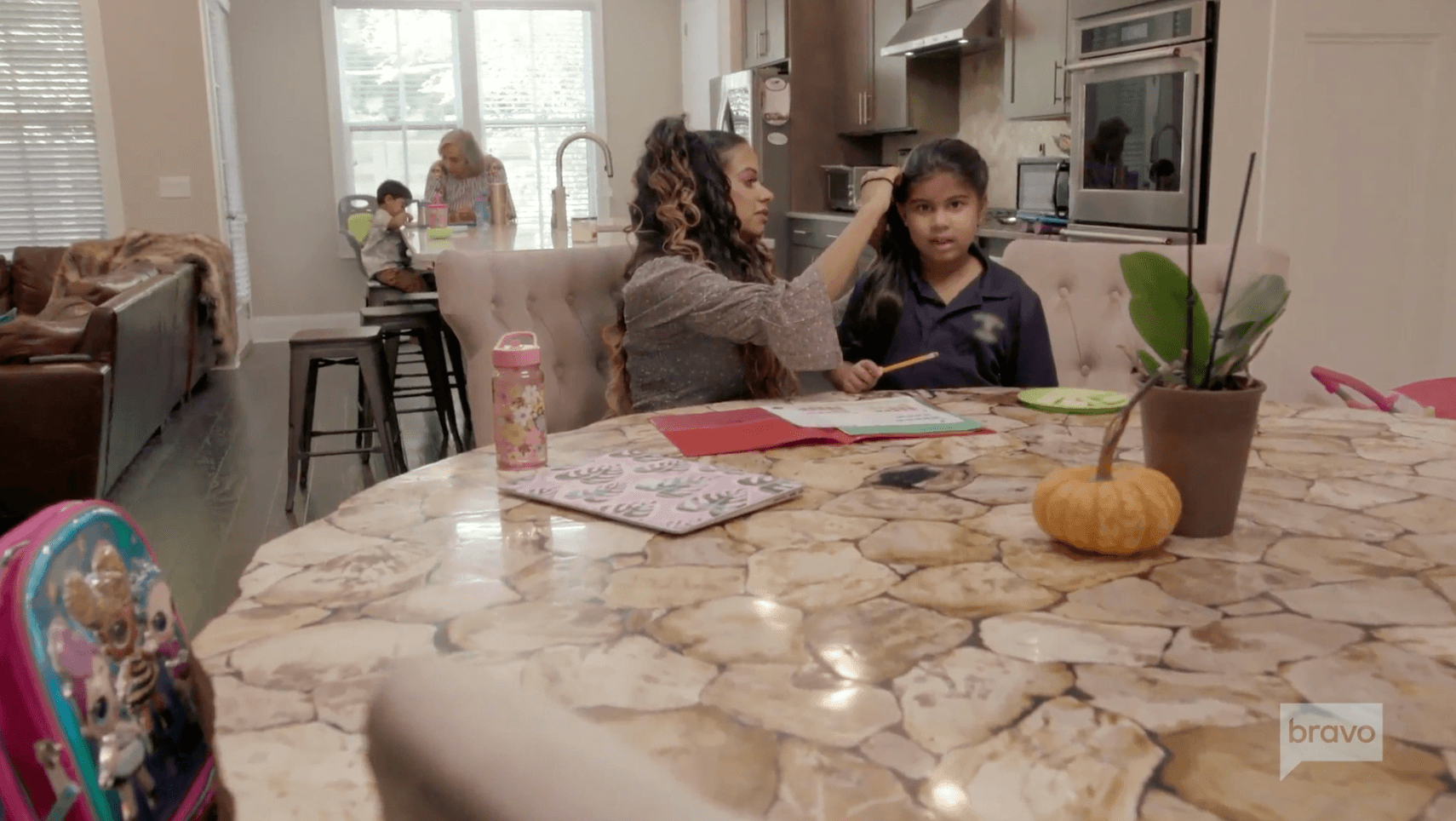 Lisa Nicole is hosting the dinner at her house, and she looks stunning in a red dress. Reviewing the menu for the night, Lisa Nicole greets Anila first while reviewing Anila’s blog post. Simone arrives next, while trying not to be awkward in front of Lisa Nicole. Before the three women can get into the meat and potatoes of Simone’s irritation; Kari Wells arrives and creates the distraction Simone needed. After exchanging pleasantries, Lisa Nicole jumps right back into the conversation and asks Simone what’s on her mind. Simone asks Lisa Nicole if she has talked to Kari or Anila about the planning of the town hall. Admitting that she hasn’t spoke to them in detail, Lisa Nicole seems confused at where the conversation is going. Simone informs the group that it rubbed her the wrong way; when Lisa Nicole sent the letter inviting people, but only had her name as the facilitator. Simone is clearly irritated. 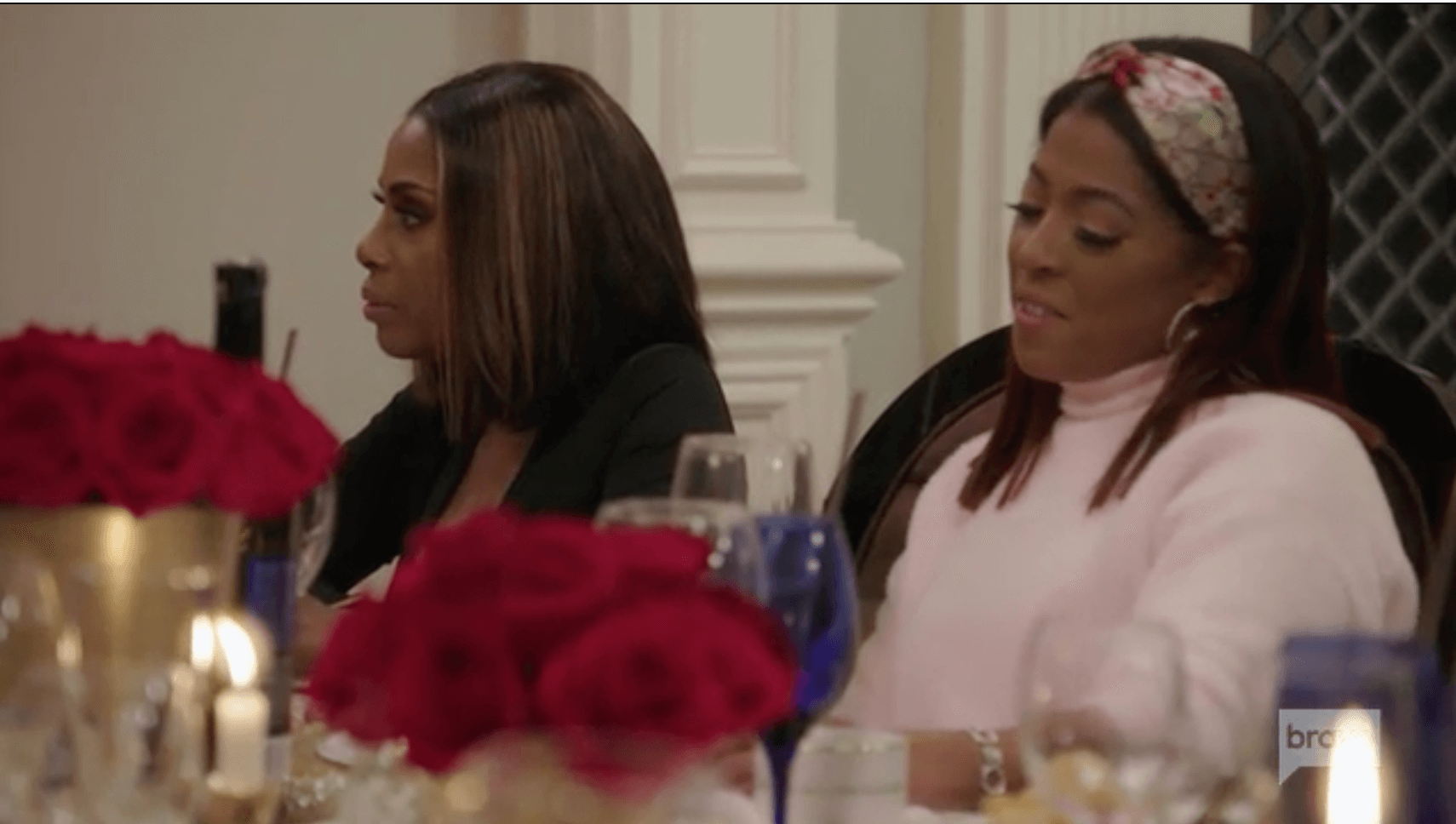 Lisa Nicole says she hears where Simone is coming from, but we all know Simone’s words went in one ear and out the other. The rest of the ladies arrive, and Heavenly stomps through the door like she’s ready to fight! Heavenly’s zipper is all undone, and sis is really on ten right now. Simone’s face is all of us, while Heavenly attempts to play it off. Lisa Nicole goes into hug Heavenly, but surprise! Lisa Nicole puts a measuring tape around Heavenly’s waist, to get back at her from Anila’s party. Clearly triggered, Heavenly is not feeling Lisa’s joke and walks away from her. Getting seated at the table, Toya promptly switches the name plates since she doesn’t want to sit next to Anila. Catching the shade, Anila realizes the two aren’t as cool as she thought. 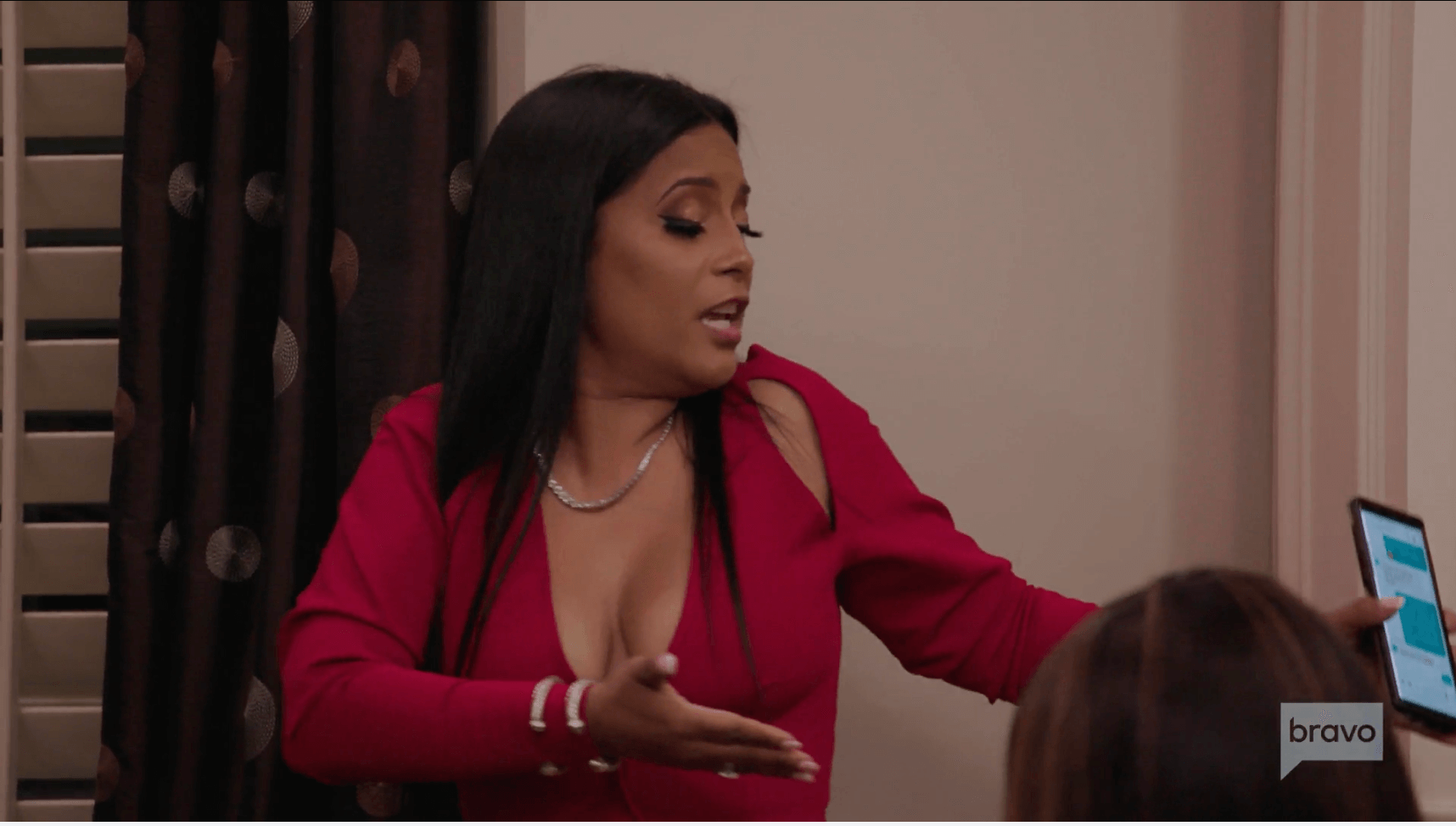 Quad arrives in this god-awful blonde wig, and the meeting officially begins. Simone starts the conversation off, (after Lisa Nicole finally says that her and Simone was planning this event) by telling the group how motivating it was to work in D.C., and how they can continue their efforts in Atlanta.  After speaking about the logistics of the town hall, Contessa asks if Simone and Lisa Nicole are working together; and Lisa admits that it is a team effort. Lisa begins name dropping and claiming to have reached out to Oprah and Charlamagne tha God to come to the event. The ladies are not buying it! Lisa Nicole doesn’t have a good track record with following through on things, so this event is no different.

Kari Wells jumps in and says that she worked for Mariah Carey, and everyone burst out laughing. Finally getting the joke, Lisa Nicole says to Simone that she gets it and the two carry on with the evening. Lisa Nicole makes an announcement that she has a surprise for someone, while gaining everyone’s attention. Lisa pulls up a Chanel bag, and keeps the ladies in suspense. Lisa shows the ladies the text from Heavenly, after the two argued at Anila’s party. Heavenly claims it was a joke, but Lisa Nicole aint hearing none of that! As Lisa tries to finish her punchline, Heavenly won’t give her the satisfaction. Cursing Lisa out and storming out, Heavenly is not with the B.S. today. Apparently, Lisa was going to see if Heavenly really weighs 150lbs, and we all know Heavenly aint stepping on no scale, especially on camera. Lisa reveals the text between herself and Heavenly, and Simone runs after Heavenly. 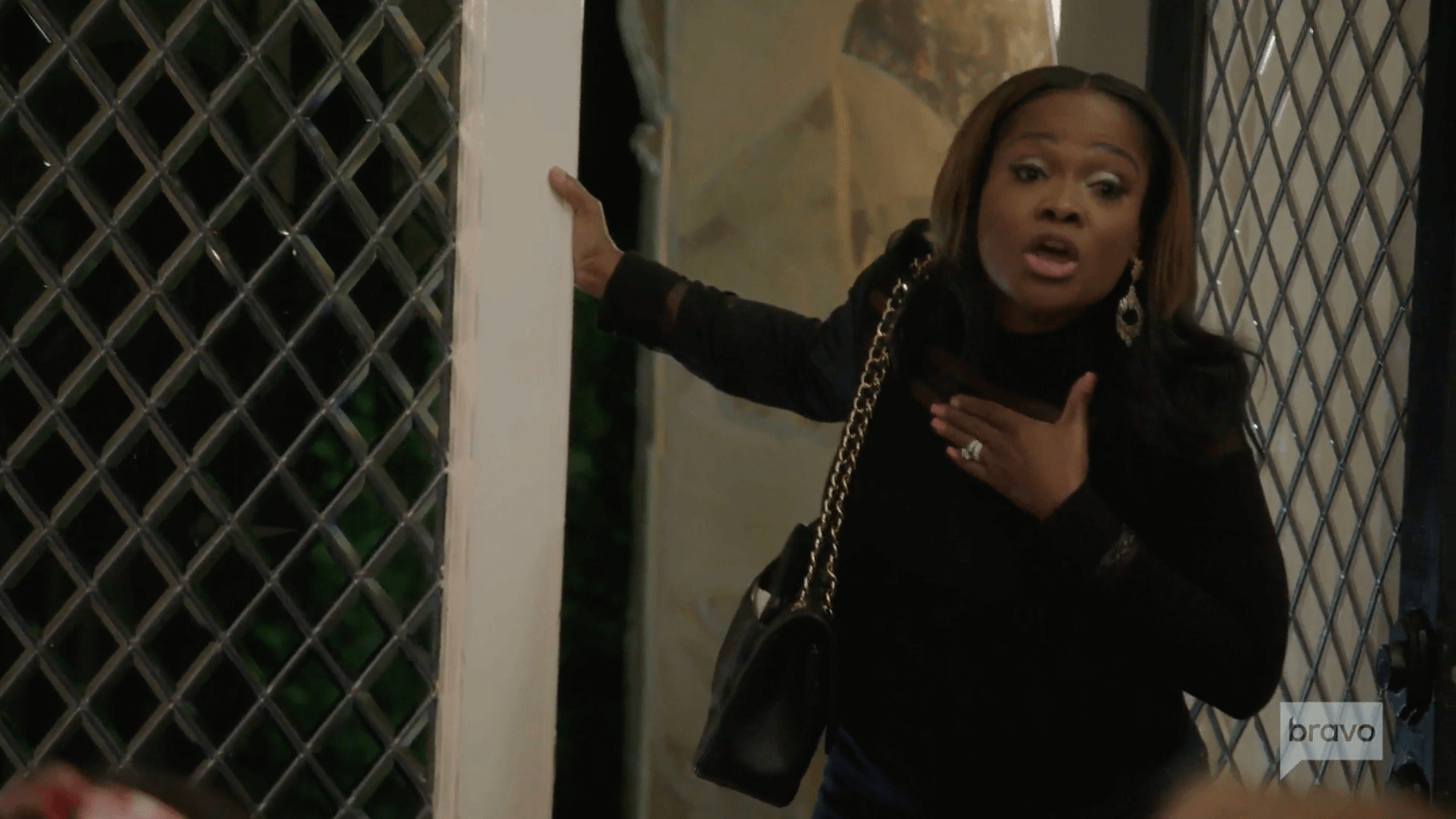 Contessa convinces Heavenly to come back inside, and Toya takes a sharp left and starts coming for Jackie. Toya wanting to get her frustrations off her chest, lets Jackie know that she doesn’t appreciate how she allowed Heavenly to degrade her. Obviously shocked, Toya continues to let Jackie know that she hasn’t stood up for anyone lately. Jackie asks Toya to change her tone, before letting Toya know she can’t convince Jackie to act or think like Toya.  Jackie tells Toya that until she can check herself, to leave her alone. Heavenly thanks Lisa for a lovely evening and Toya isn’t done throwing daggers at Jackie. Jackie takes Toya to the bathroom, so they can have a private conversation. Toya admits that she’s always admired Heavenly, but after introducing her to the group; Heavenly’s changed. Finally, we are getting to the core of Toya’s anger. I’m excited to see what’s next. See yall next week!