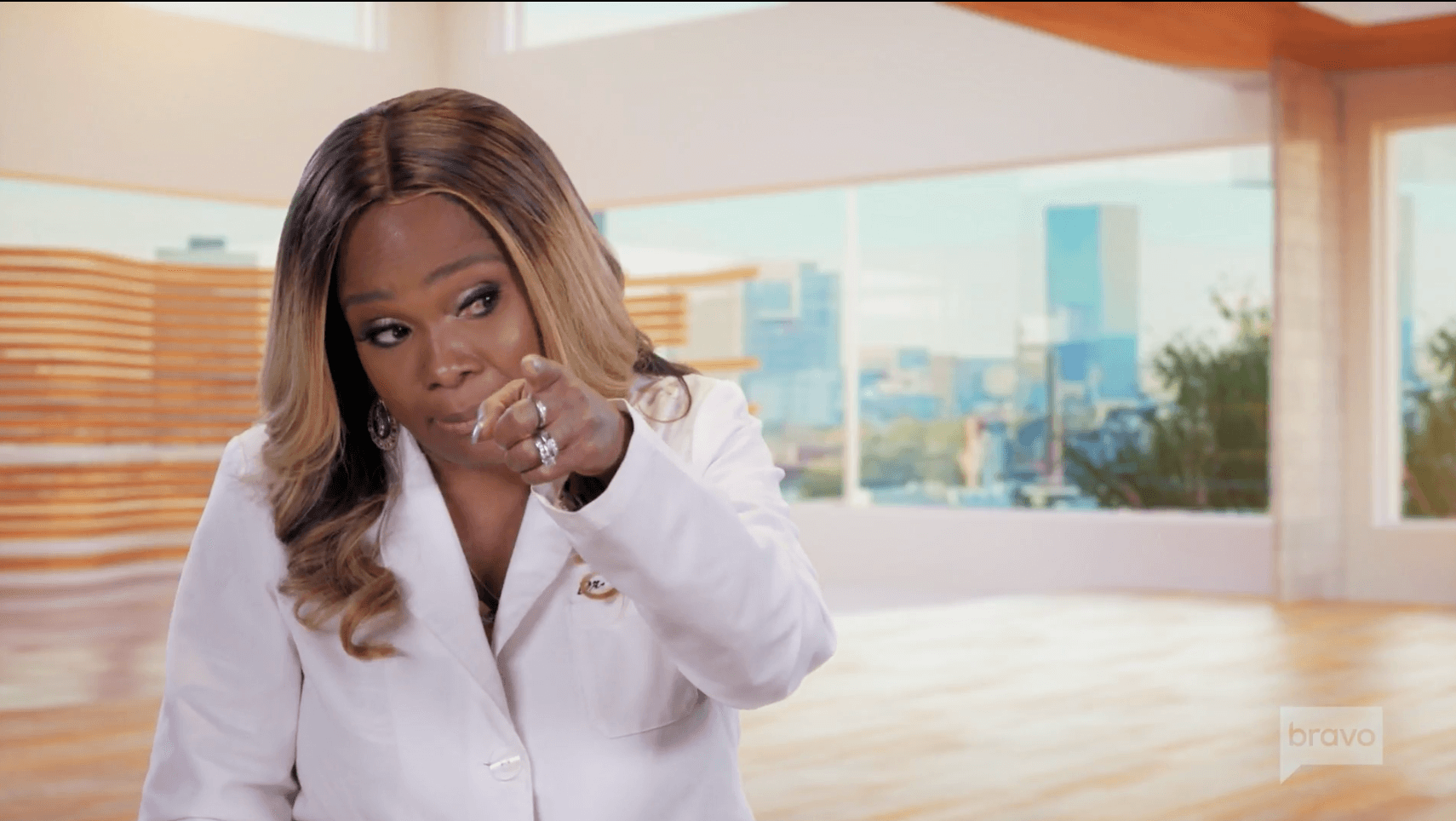 On Sunday night’s all-new episode of Married To Medicine, we begin with Quad Webb-Lunceford meeting Anila Sajja at a local restaurant. Seems like the two have been spending a lot of time together, especially since they both showed up in matching tiger print. 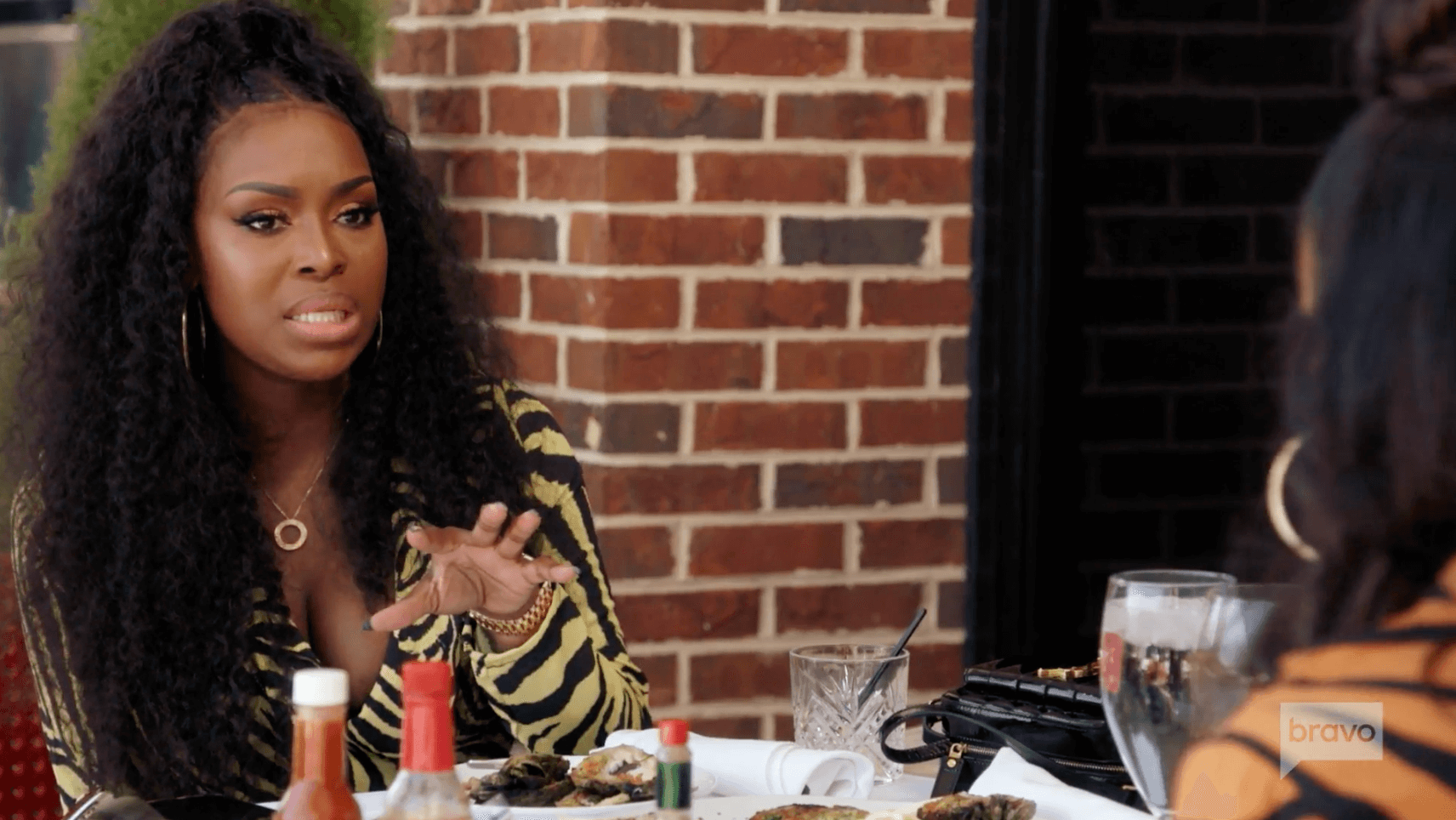 Coincidence or producer produced? You be the judge. Anyway, the pair take a few pictures and begin small talk. After receiving the menu, Quad takes it upon herself to order; but confirms that she plans on sharing the food with Anila, to stay “snatched”. Giving Quad praise for her party, Anila seems to really enjoy Quad’s company. 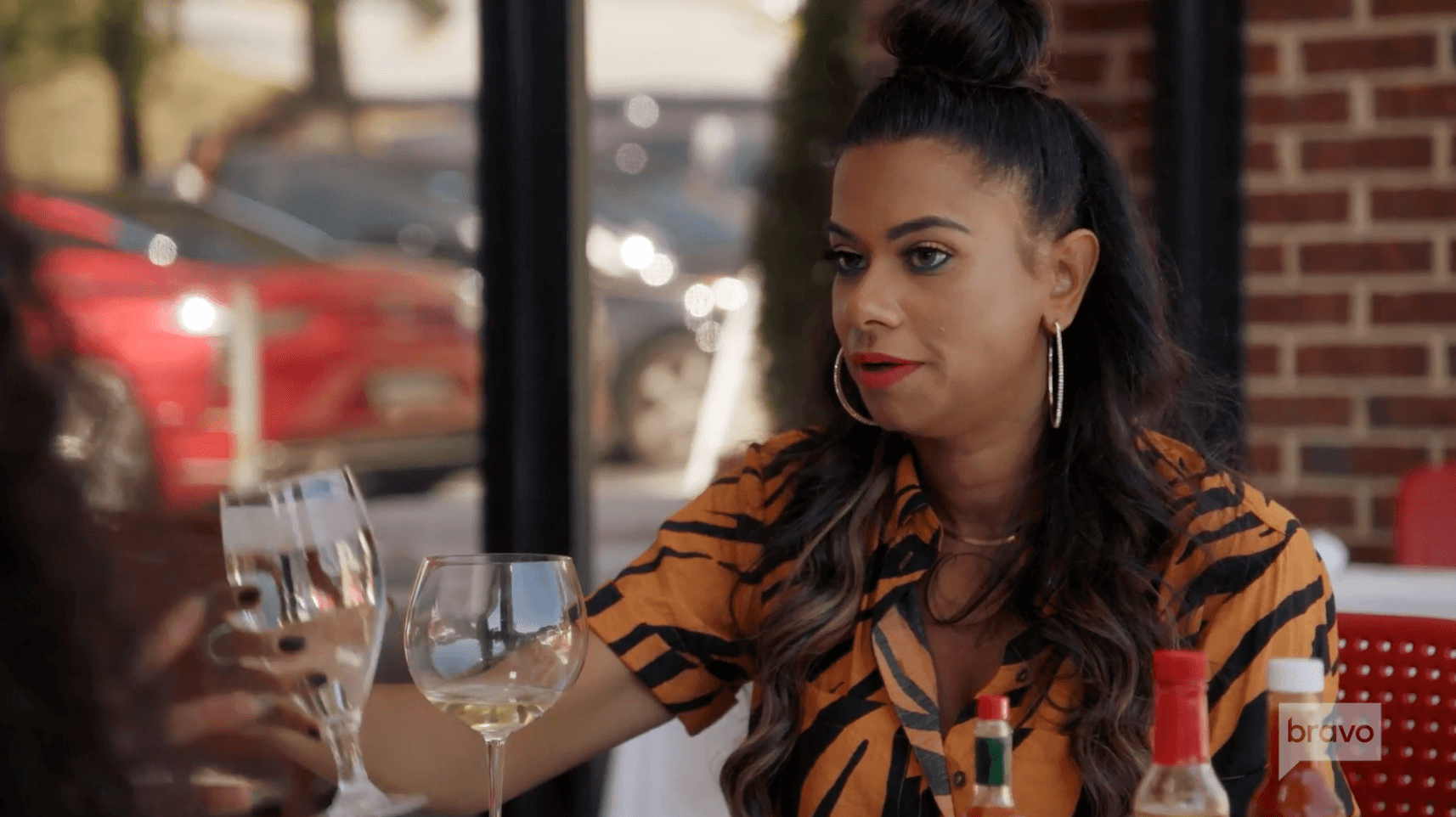 Briefly reminiscing about the party, Quad states that she wants to meet Dr. Karin Sajja, while wondering what type of friends he has.

Across town we meet Dr. Contessa Metcalf, Dr. Simone Whitmore, and Toya Bush-Harris getting food also. The trio make a toast to love, friendship, sisterhood — and Toya throws in evolving in their friendship as well. Contessa and Toya are in a good place now, since Contessa was there for her, after Toya’s blowup with Quad. 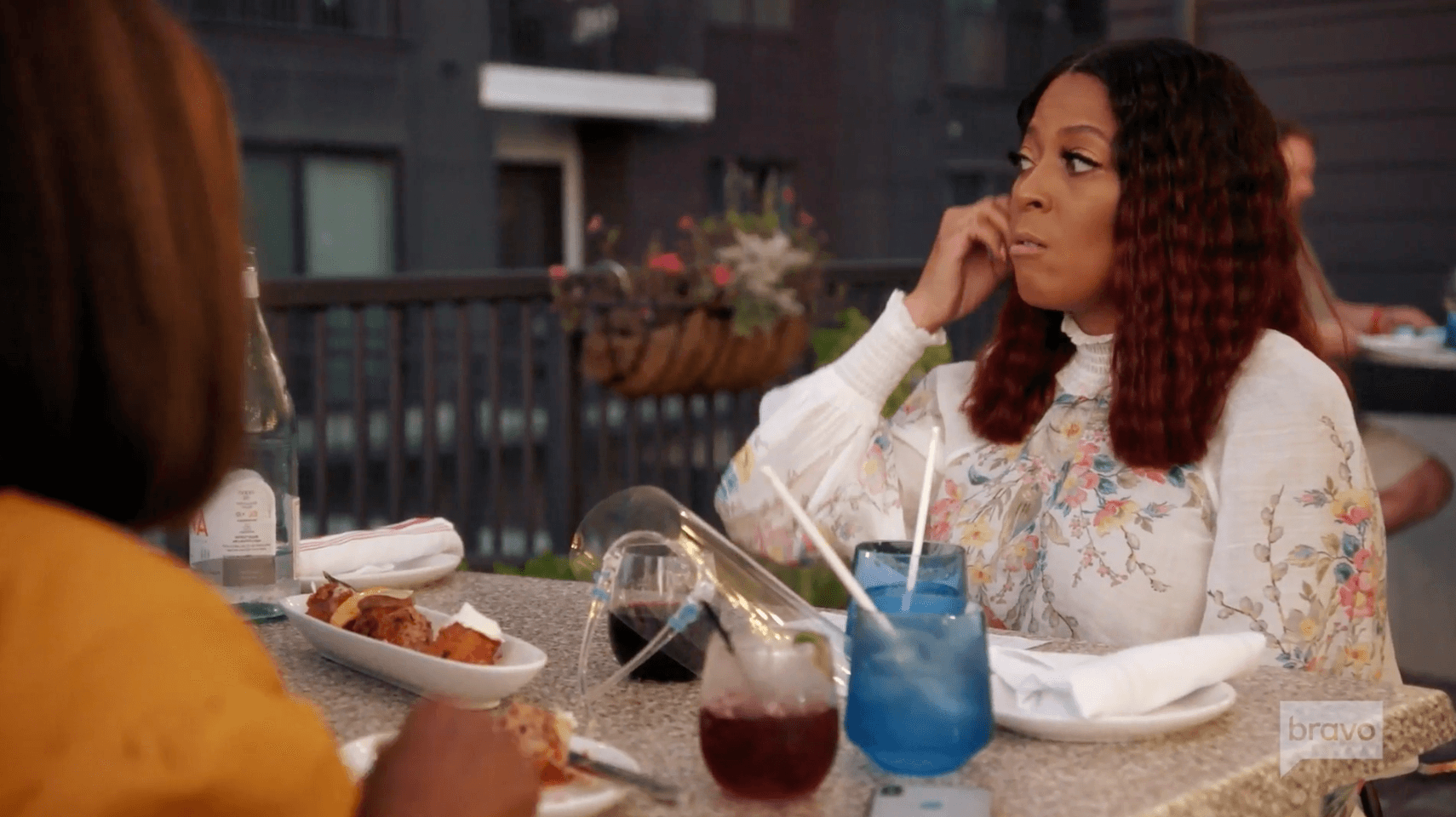 Attempting to get to the root of the issues between Anila and Toya; Contessa asks, “What have you said about her?” Toya…with a straight face lied and said she hasn’t said anything about Anila. Contessa’s not trying to push the issue, because she knows no one is innocent in this situation. 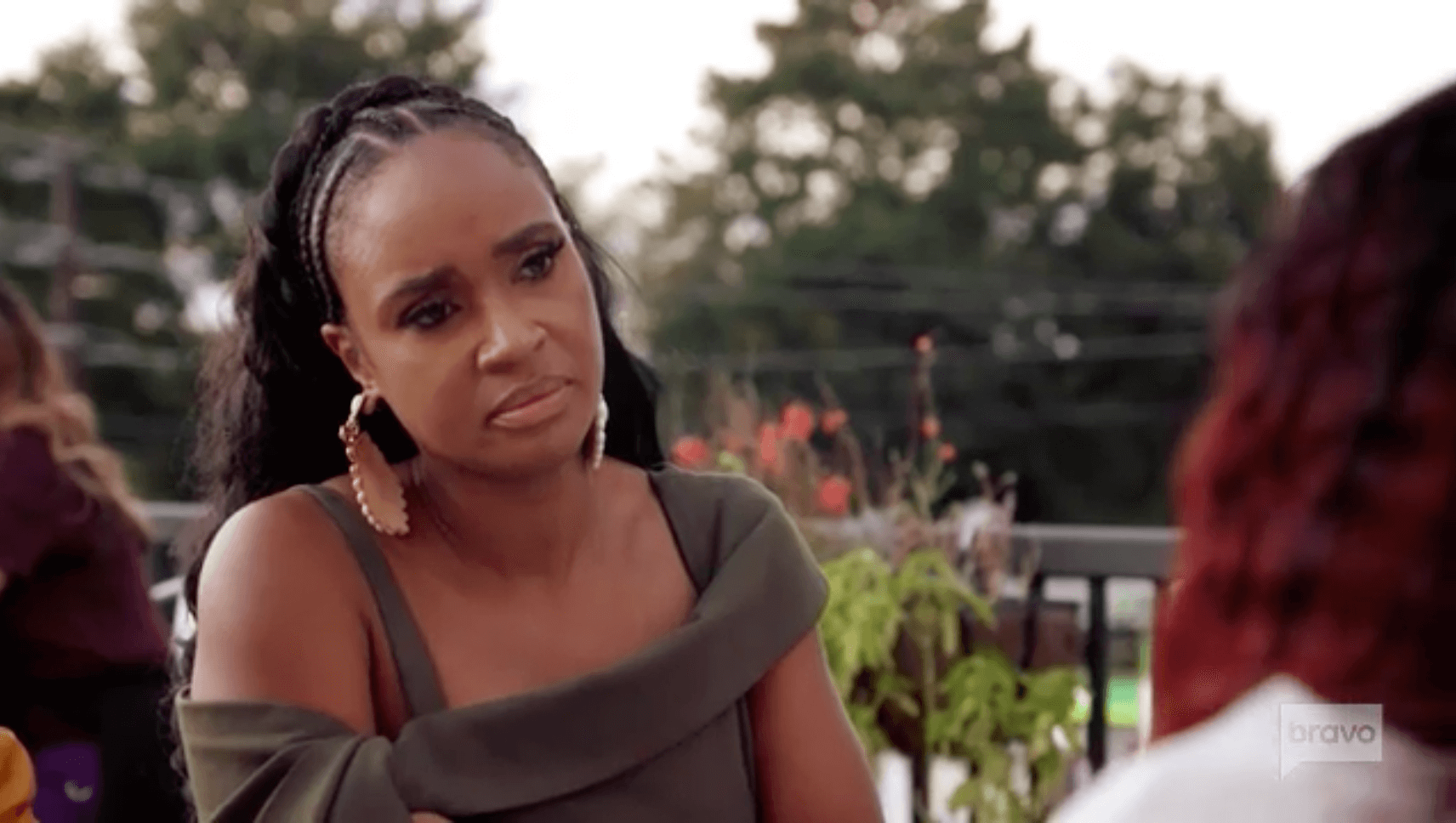 Meanwhile, Quad is planting seeds in Anila’s head  that Toya may be jealous that she is building her own relationships within the group. Anila claims she’s been nothing but loyal to Toya and doesn’t understand why Toya is acting like a different person. Quad is out for blood about this “small apartment comment,” while Simone and Contessa attempt to talk Toya into having a one off with Anila or Quad. Toya promptly declines and Simone invites Contessa and Toya over to a couple’s night. The plan is to play games with the spouses and uncover new things within their marriages.

At Anila’s, her parents are visiting and preparing for an upcoming festival. Anila only needs are color, food, and music in hopes of having a fantastic time! To save money for the new house, Anila decided to combine the Holi festival and her daughter’s birthday. 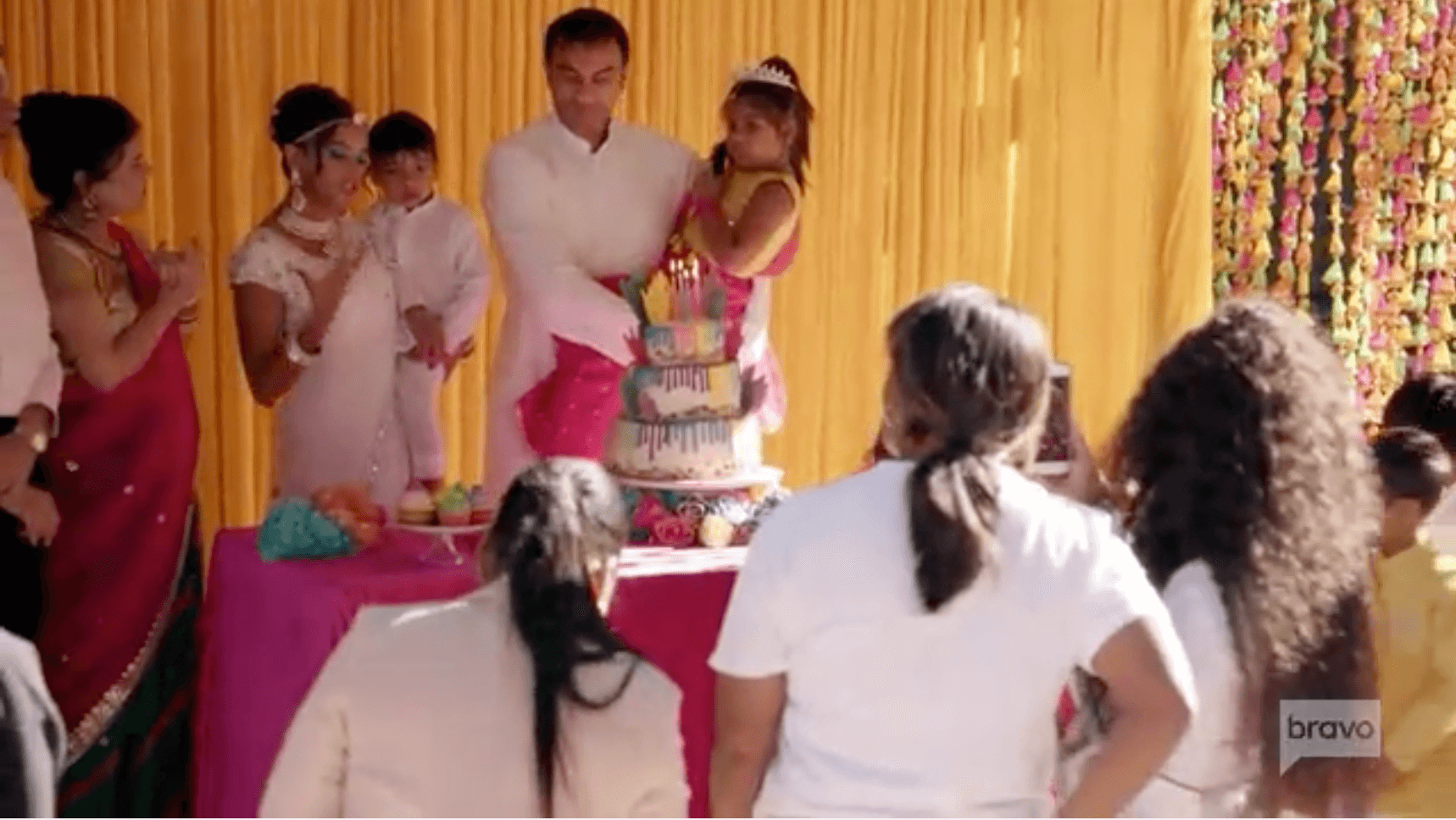 Anila invites all the ladies and prepare them for the plans. While speaking to Quad, we hear that Anila doesn’t plan to invite Toya to the event. Seems like this friendship is going downhill and fast! At Dr. Jackie Walters office, she’s reviewing the meetings she has with her manager. Realizing the need for skin care aimed for ethnic women — Jackie has decided to work and balance the game for women of color. After confirming her next steps for the Volition Beauty business, Jackie embraces the excitement she’s feeling. 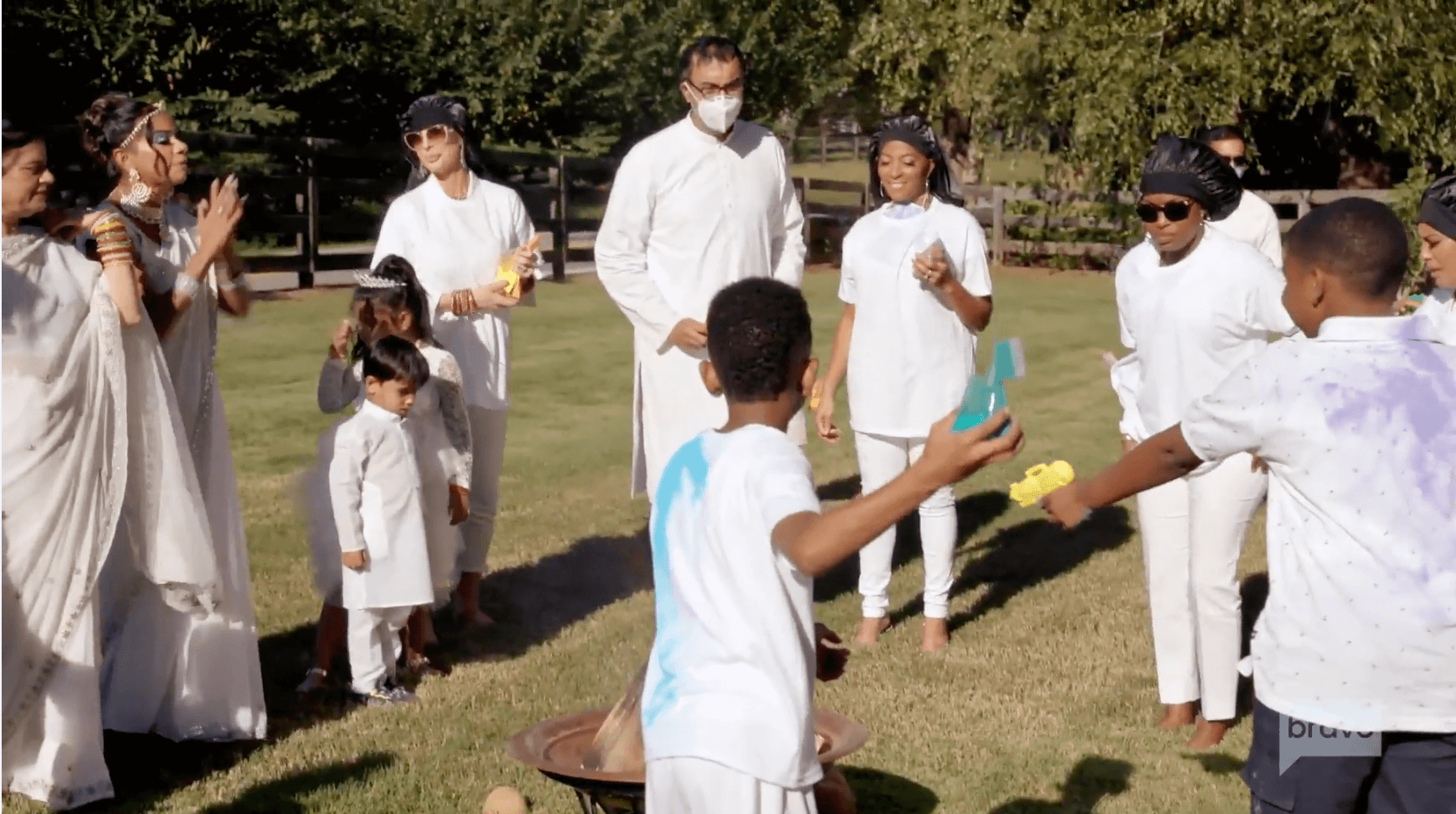 A delicious meal is being prepared at Simone’s house, and she is ready to throw down. Toya and Dr. Eugene Harris arrive, and Cecil Whitmore explain tonight’s all about couple’s conversation. Beginning the conversation on misinterpreting their spouse’s mood, Toya throws a good example out about how doctors don’t like to own anything. 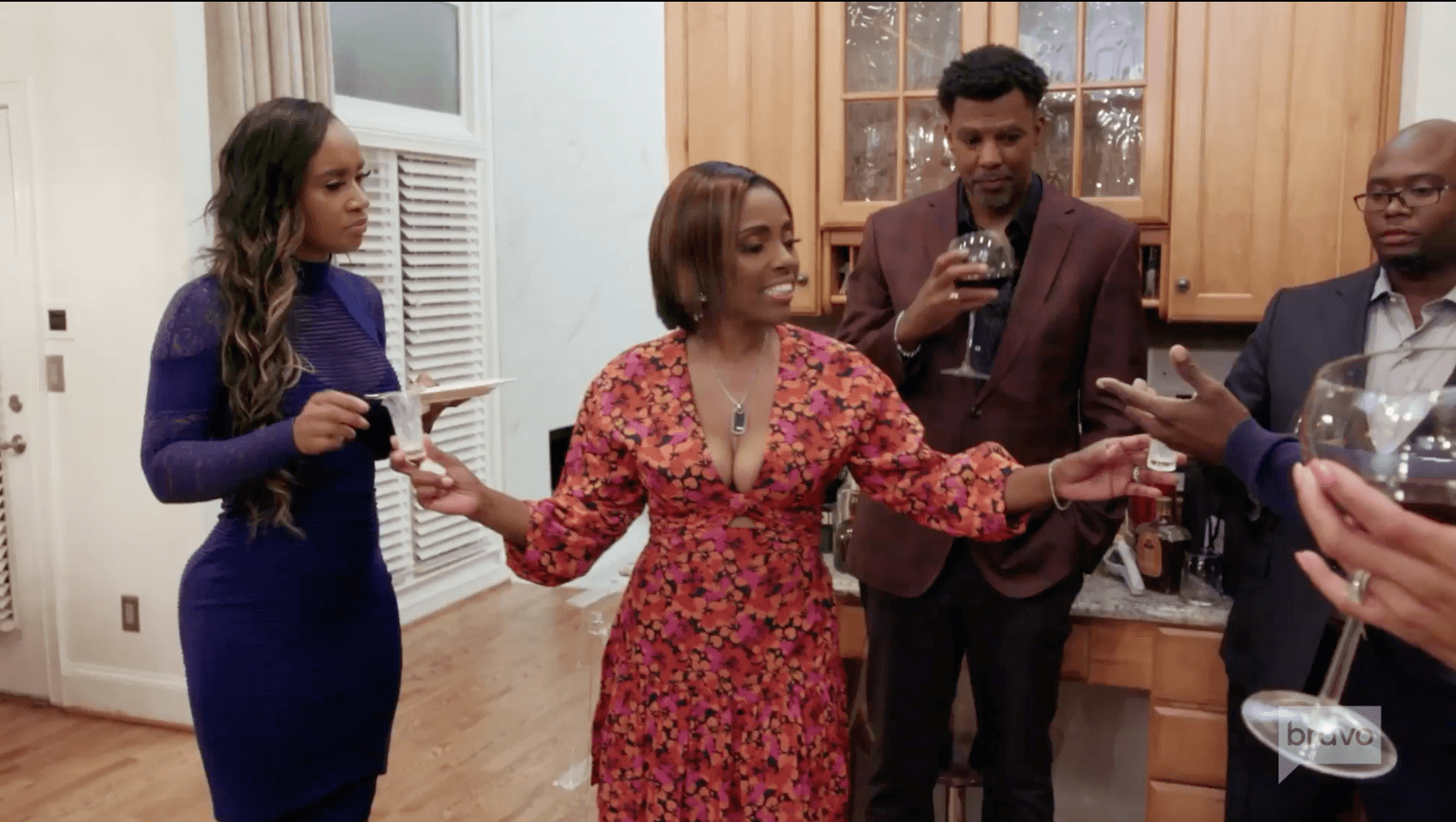 Cecil vocally praises Toya’s comment, while Simone pretends to be insulted. Contessa and Dr. Scott Metcalf arrive seeming all in love. In matching blue attire, Scott makes a joke about this being one of them “freaky parties”. Although Contessa blasted Scott’s comment to everyone, it doesn’t seem to catch the others off guard. Apparently, they know who their friends are LOL. After getting started with dinner, Simone leads the conversation towards the importance of communication and problem solving.

Fully participating in the topic at hand, Toya reveals that she believes COVID heightened their marital problems. Toya is missing the family time and the anniversaries that she’s used to. Instead of having the option to distract their kids from their disagreements, now the boys can pick up on tension in the house. Finally! We are getting to the root of Toya’s issues! Simone voices that it’s a choice to argue in front of your kids. Easier said than done, Toya expresses this; while Contessa relates to how Scott answered the phone as they were in therapy. Scott on the other hand, thinks it’s better to walk away from an argument, instead of lashing out and potentially saying something hurtful. Eugene chimes in and states that sometimes it feels his wife is critiquing to tear him down, instead of building him up. Hmmm…I see what Simone and Cecil are doing here.

It’s amazing to see black married couples talk about real problems they experience. Contessa brings up that the feelings Eugene is explaining can go both ways, and how she’s been told that “she don’t do sh**!”. After a breath, Contessa begins to get emotional and Scott whispers “Relax, Relax”. Ugh! He’s still doesn’t get it! Things doesn’t seem to be improving between Scott and Contessa, and it seems like it’s going to get worse before it gets better. Defusing the tension, Simone redirects the couples to another toast while moving to the living room. Toya feels like they are in a circle of confidence and seems to be open to talking more. Ending the evening on a constructive note, Simone reiterates that marriage is about communication and compromise. Scott makes a promise to stop running away from arguments and hash it out with Contessa. Scott didn’t agree to go to marriage counseling, but he promised to romance Contessa more. We’ll see. 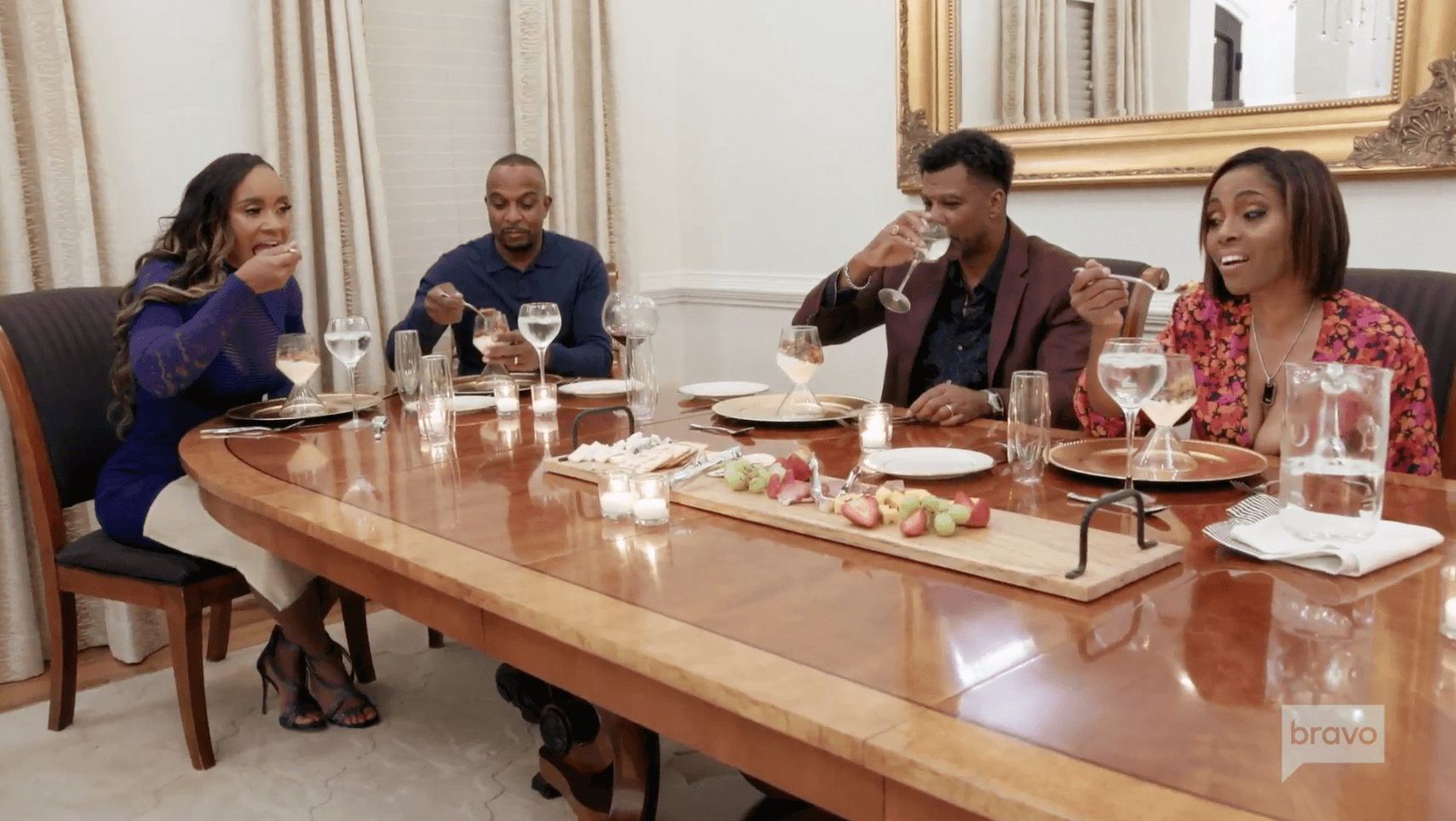 Meanwhile at Anila’s farm, the party is coming together with beautiful decorations and colors everywhere! Everything looks exquisite but  Dr. Karin Sajja is understandably concerned about the cost of the party. I guess it’s easy to throw lavish parties, while not paying your MUA. Guests begin to arrive wearing all white, and I’m happy to see everyone is taking safety precautions. New besties Contessa and Toya are riding to Anila’s together. Anila decided to invite Toya after all. A quick flashback reveals that Lisa Nicole Cloud mediated the meeting between Toya and Anila, and they both apologized for hurting each other. Hopefully with kids around, these ladies won’t act up.

The guests arrive and the party begins! Kari Wells and Lisa Nicole Cloud came to the event as well, so we know Dr. Heavenly Kimes is about to turn up. Anila’s mom begins gushing over how nice and beautiful Anila’s friends are, andJackie decides to try to mother Anila’s mama. As Anila was explaining that she’s sweet until someone messes with her, she purposedly used the “sh**” in her statement. Jackie making it her business, asked Anila’s mom if she allows her daughter to speak like that. That woman is old enough to be Jackie’s mama, and she had the nerve to question her, about her own child? Whew! Ushering the ladies to pet the animals, Anila shows off all the best aspects of her party. Heavenly is the first to climb on a horse, as Kari and Lisa Nicole take their chance to shade Heavenly. Kari says she’s worried for the horse, and Lisa Nicole said the horses’ legs weren’t steady.  Overhearing, Heavenly is instantly triggered. 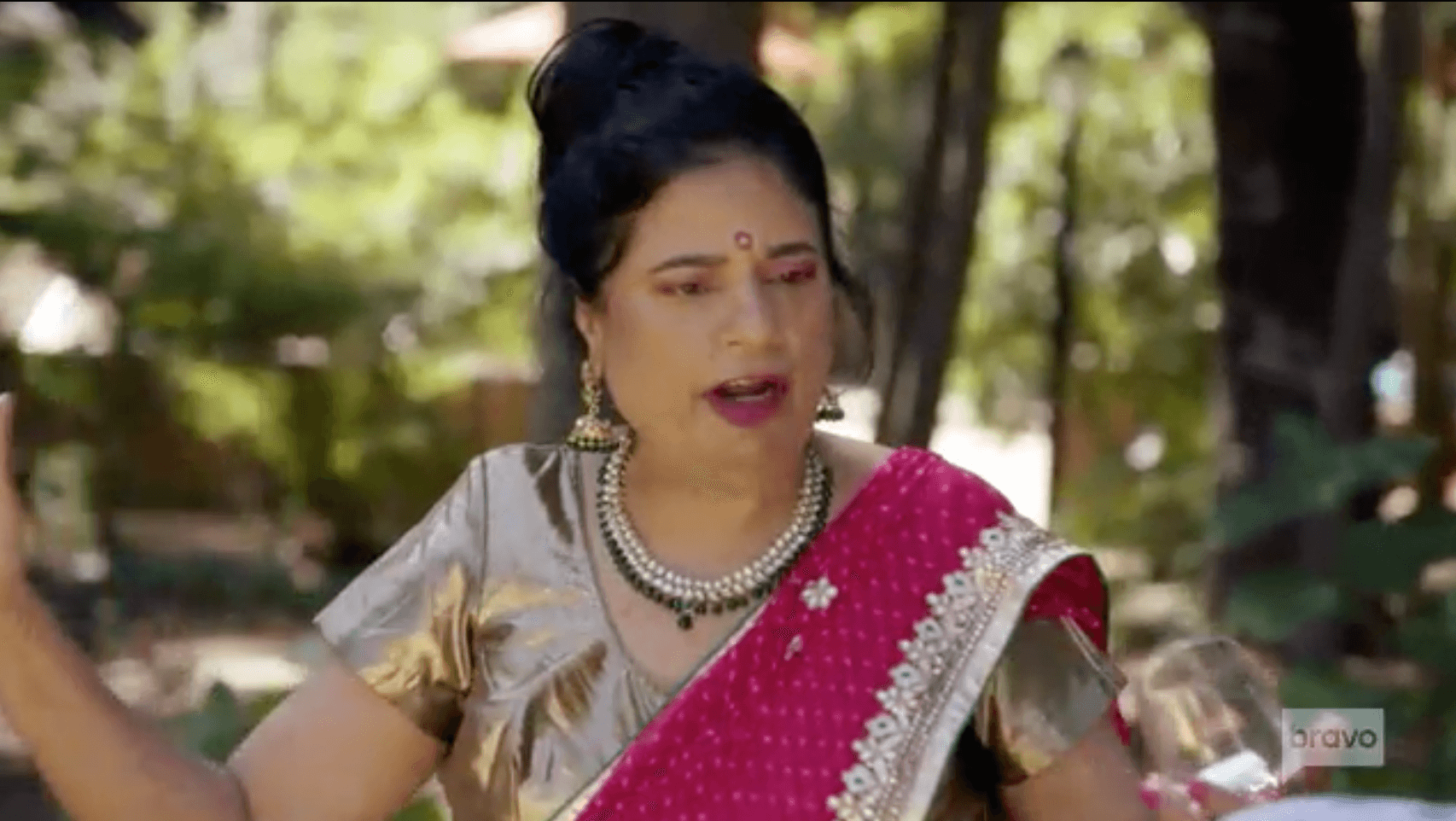 Once Lisa Nicole jumped on a horse, Heavenly made sure to get even. “Is that your stomach girl?” Heavenly shouts as she’s recording on her phone. Lisa Nicole claps back claiming she’s talking about herself. Quickly getting into a screaming match, Heavenly goes for the jugular and says Lisa Nicole can’t keep a man home. Lisa Nicole lets it be known that she’s still with her man, and that Heavenly has a “fake a** marriage”. Everyone is now witnessing the chaos and things quickly spin out of control. Lisa Nicole thinks Heavenly wants to be like her, and once Heavenly says Lisa Nicole is “A b**** that don’t know how to keep a man?!?” Lisa Nicole calmly states, “You’re a drunk” and before Heavenly can properly explode, — Anila screams at them to gain control. 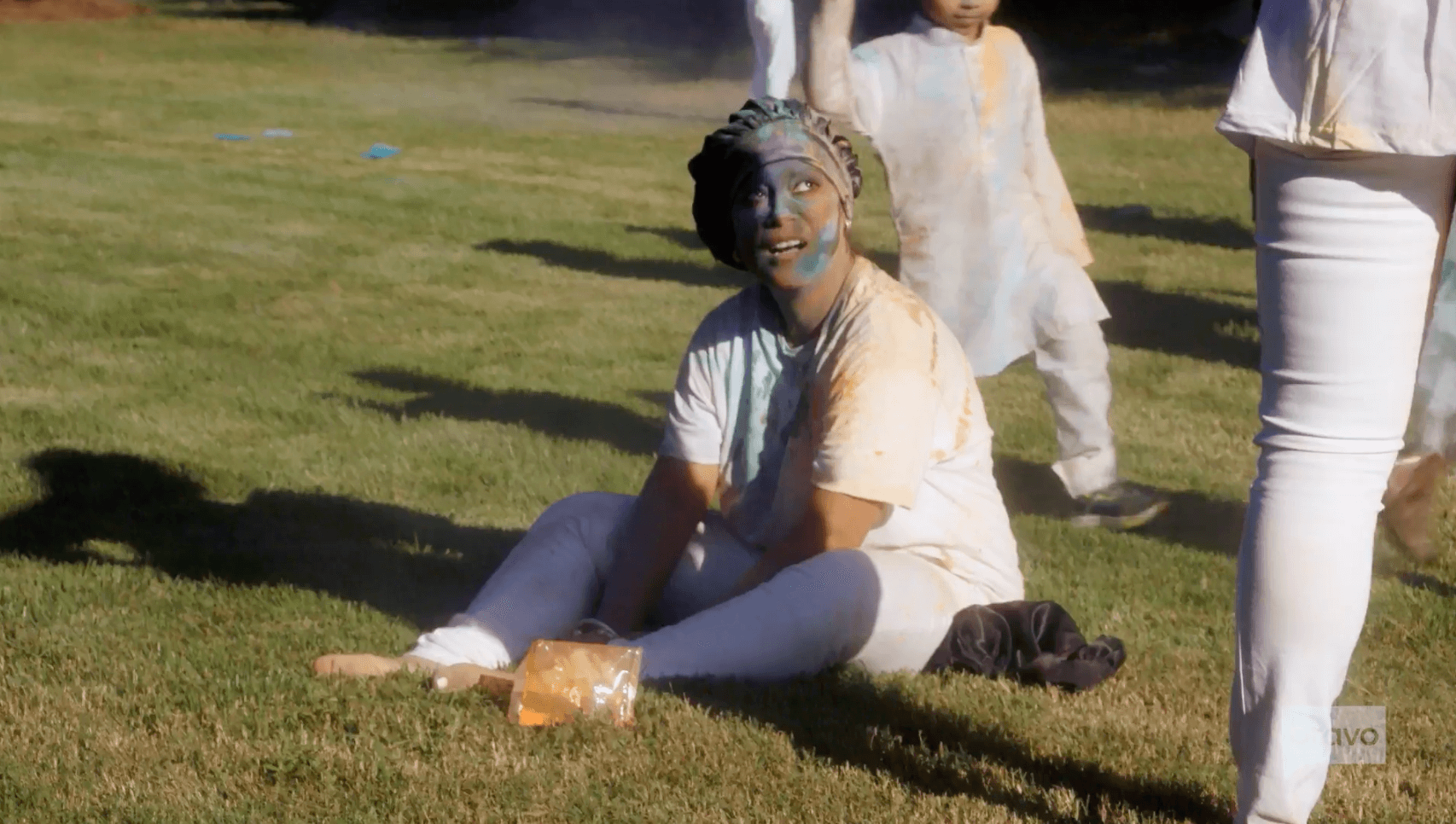 Quad arrives right at the end of the hectic argument. Jackie and Anila walk Heavenly over to the food, and the energy begins to calm down. Toya and Contessa finally arrive with the kids and are non the wise to the mess they just avoided. Anila thanks everyone for coming and explains the tradition of the Holi festival. With bonnets and masks in tow, the ladies begin throwing paint on each other and letting go of their negativity. In the honor of Holi, Anila attempts to get Toya and Quad to move forward, but it met with resistance from both sides.

Toya is getting annoyed at Anila trying to be the peacemaker. It’s clear that neither Toya nor Quad are ready to let go of their anger. Moving on for the sake of the party, this doesn’t mean Anila’s done rekindling this friendship. Let’s hope poor Anila doesn’t get caught in the crossfires of that standoff.