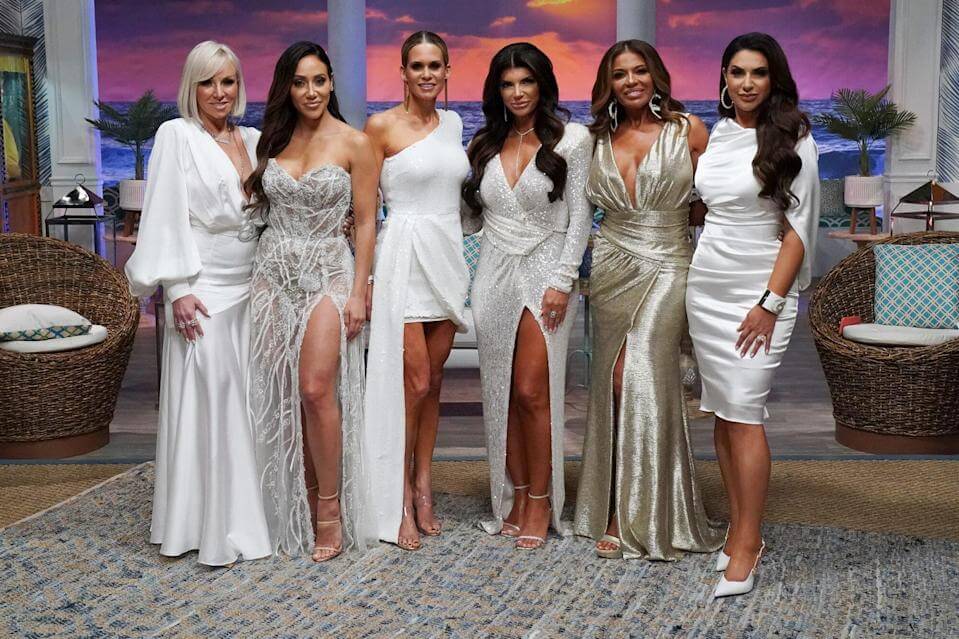 Part one of the Real Housewives of New Jersey reunion starts with a rehash of the argument between Teresa Giudice and Jackie Goldschneider. How many times will the word “rumor” be spoken? It looks like Jennifer Aydin is going to accuse Margaret Josephs of being the instigator of “the rumor.”

Andy Cohen is asking everyone what’s new, and Dolores Catania announces that she has a new vagina. Margaret says her face has settled in. Teresa says she’s juicy.

The clips start with the moms managing their children during the pandemic, including that terrible sex discussion that Melissa Gorga had with her daughter, Antonia Gorga. Even though Margaret’s son wasn’t shown on television, he is moving back in with her soon because of a relocation and job change. She mentions how her son feels about the show and says her son thinks she “was always TMI, and it’s you, it’s not me.” 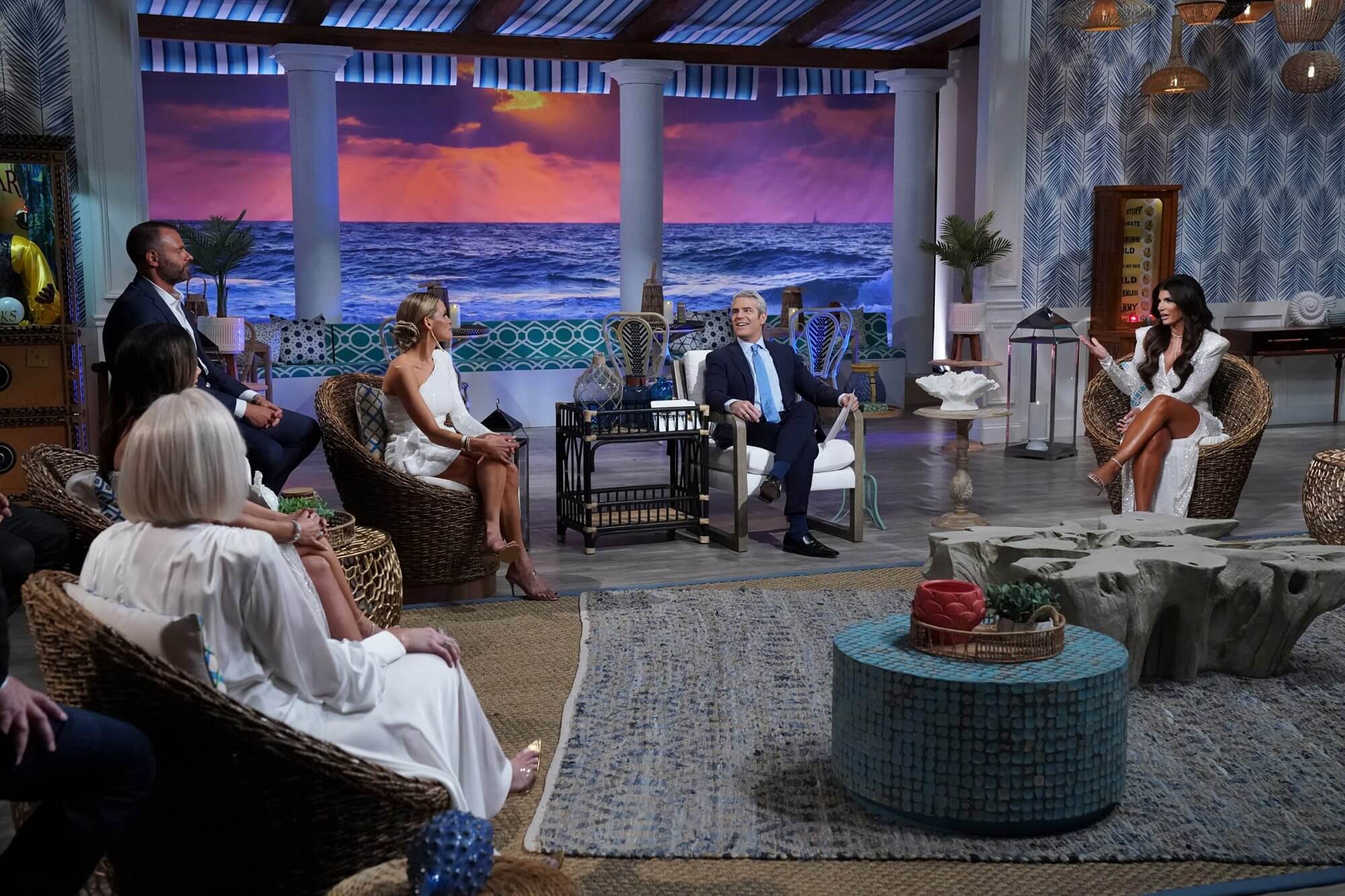 Andy asks The Marge why she has so little respect for stay-at-home moms. Margaret says that she was a stay-at-home mom and it’s not about that. She and Jennifer take pot shots at each other. Margaret says that Jennifer’s Instagram bio says, “married to a plastic surgeon.” Then Teresa chimes in to say, “Maybe she’s proud to be married to a plastic surgeon. I don’t think you would say, married to a plumber.” YIKES! Isn’t Margaret’s husband a plumber?

The focus switches to Jennifer and her exposing family secrets. The video clips show the tough situation Jennifer is trying to manage between her parents. Jennifer and her mom are still not speaking. Margaret, Melissa, and Jackie think that Jennifer is taking about her family to have a storyline and throwing her mom under the bus. Jennifer says to Margaret, “I wouldn’t expect you to recognize family if it pulled on your pigtails, sweetheart.” Jackie says, “Our families shouldn’t be the ones who are dragged.” Teresa immediately says, “Are you kidding me?” Teresa is calling out Jackie for including Gia Giudice in an argument. 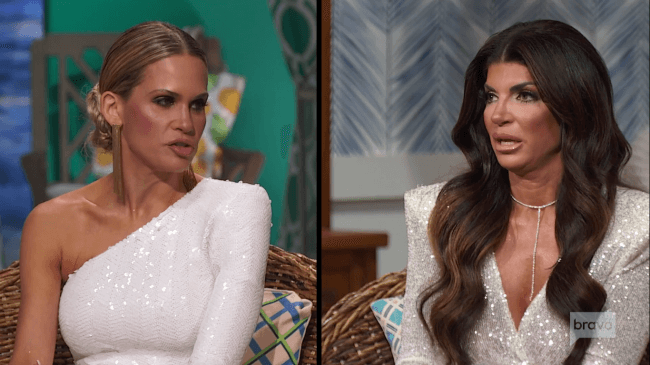 Jennifer doesn’t really agree that her father is abusive. She says, “It was always my mother giving it to my dad.” But she did go on to say that her father neglected her mother. Jennifer’s mom wants an apology for taking her dad into her home. Jennifer’s mom doesn’t want to live with her husband, but she wants Jennifer to turn her back on him, too.

Melissa jumps in to talk about the jabs back and forth with Jennifer. Then Jennifer drops a bombshell. When the group was in St. George and the rumors were swirling about Joe Gorga not paying his bills, off camera, Jennifer was talking to Margaret. Jennifer says that Margaret said, “Michelle [Pais] came on the show purposely to try to ambush you [Melissa]. And I said, to be honest, I’ve kind of heard that before about Joe Gorga, but I don’t know.” Then Jennifer said, “Are you f-ing kidding me? My husband’s a plumber. You think we don’t know he doesn’t pay people?” Margaret calls Jen a liar. Teresa backs up Jen and said that Jen relayed that story to her that night in St. George.

Joe G. comes out so that the discussion can turn to his marriage to Melissa. Andy shows footage of their arguments this season. Joe says that Melissa spent about six months going to many events, maybe too many. Joe wants her to be around more. After a long conversation and everyone chiming in, Joe G. says, “I’m an amazing guy.” They both think they are in a good place now.

Andy then turns to how Teresa and Joe Gorga are sticking together, and both had to say goodbye to their father. They had a ceremony to say goodbye. Teresa says she’s been through a lot. She went to jail and Joe Giudice went to jail. Then she lost her mom and then her dad. Joe Gorga is so happy that his sister is happy.

But they did hit a rough spot and disagreed over Joe Giudice. Joe Gorga has been very angry with Joe Giudice for a long time. When Teresa went to jail, he said, “My parents held it in for a long time because they had four granddaughters they took care of and they loved.” Joe Gorga says, “I know you went to prison, we went to prison, too.” He went on to describe how they walked into the house to see Joe Giudice and realize that he was the reason that Teresa was gone. He said his mom cried to him.

Andy shows a clip of Gia on Watch What Happens Live where Gia said, “My Uncle Joe and Aunt Melissa should not bring up my father because it’s not only disrespecting my mom, but it’s disrespecting my sisters and I.” And Joe G.’s reaction is that he has been trying to hold it in for so long.

Andy says that he has something that Joe Giudice said in the press about Joe Gorga and Melissa. “The only person that hurt your dad was Joe Gorga. He took money from your dad, that your parents lost their home because of Joe Gorga. He never helped your mom when she was sick. He never showed up when she was in the hospital. Melissa never checked on her.” Teresa said that it’s not true what Joe Giudice is saying about some things, but she defends some of his statements based on things that happened more than a decade ago. In a very “old school” way, Teresa, Joe Gorga, and Melissa decide that “it’s done” and they are never going to speak Joe Giudice’s name again. 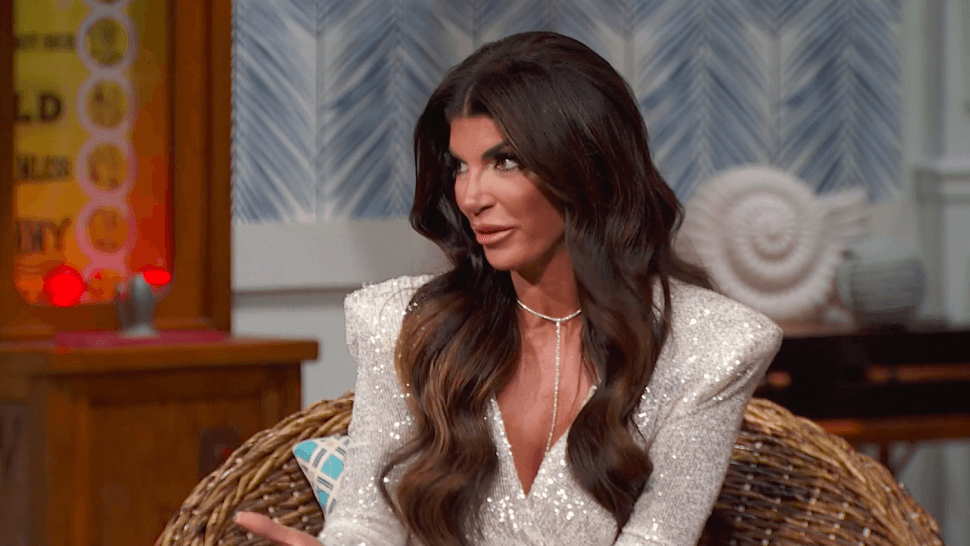 Andy asks Margaret how she and her husband, Joe Benigno, can argue and then move on from it. And Margaret says they just don’t hold grudges. Jen pops in with a comment about, “He is quite submissive to you.” And Margaret shoots daggers in Jen’s direction. The Marge says, “Don’t comment on a game you can’t compete in.” 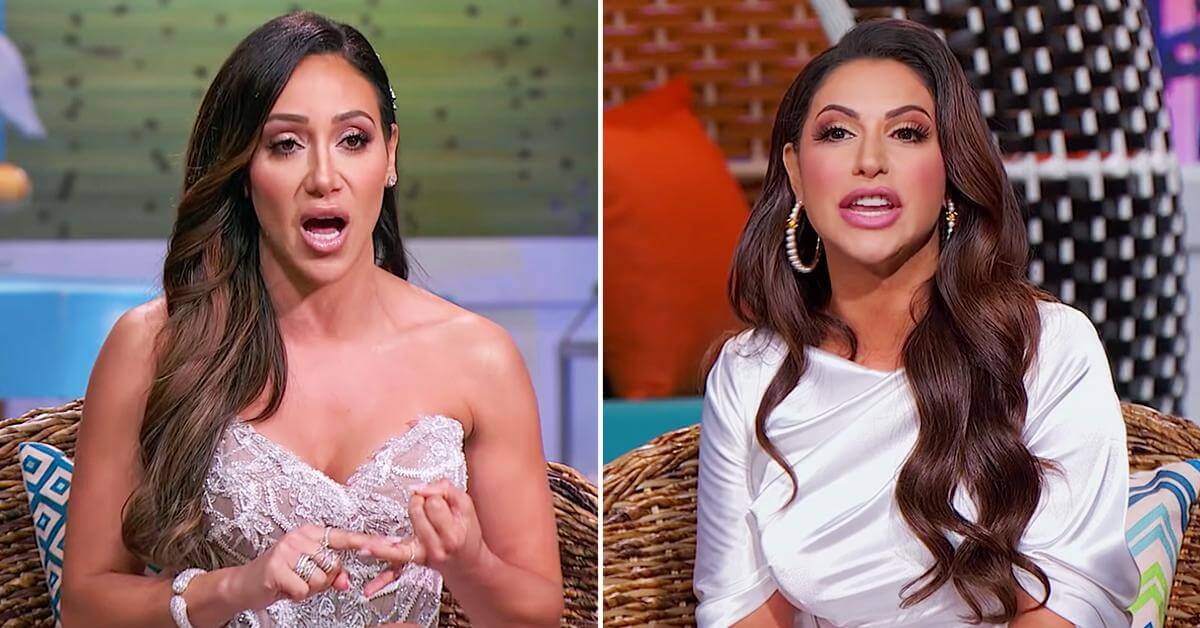 Next time, the Joe G. and the rest of the men make an appearance, but, it seems from the footage, not Luis Ruelas and not David Principe. And, good heavens, there will be more about “the rumor.”