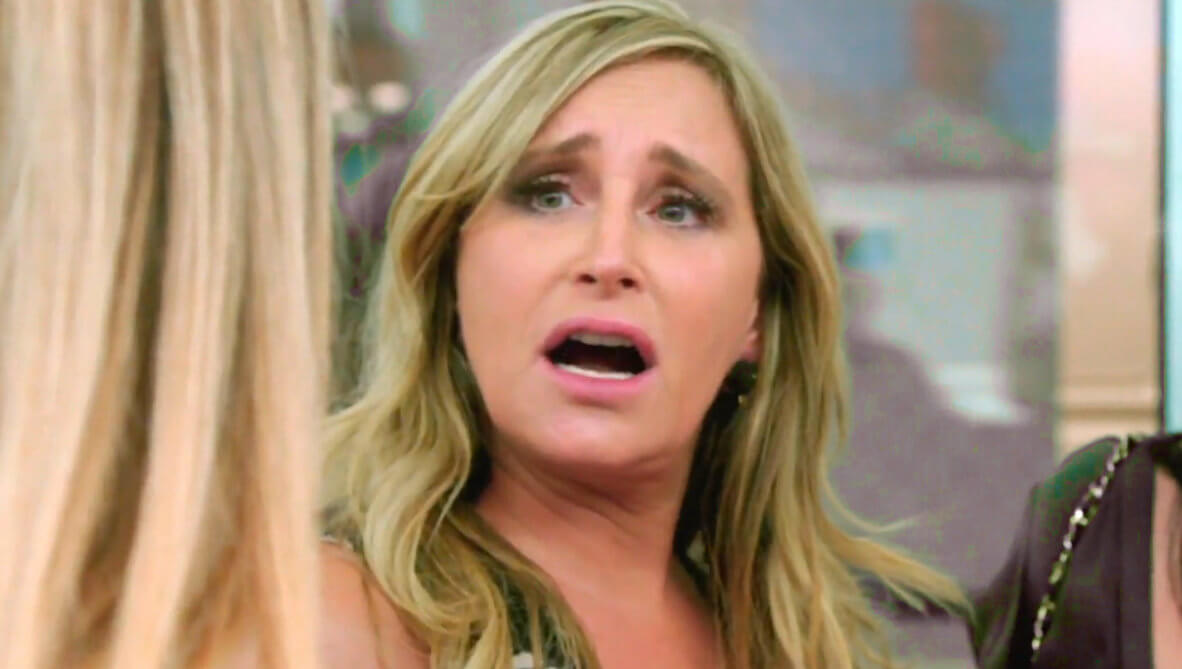 This week’s episode of Real Housewives of New York City starts with a trip to the Hamptons. This franchise should probably be renamed at this point. Where are the married housewives? Maybe in the comments, everyone could chime in with a new name for this show.

At Eboni K. Williams’ apartment, Leah McSweeney and her giant pink bow arrives. Leah is asking Eboni questions, again, that show they really are staged friends for TV, not real friends. Eboni tells Leah that her ex stayed with his kids in New Jersey during quarantine, and she stayed in the city. So that was the end of their relationship. 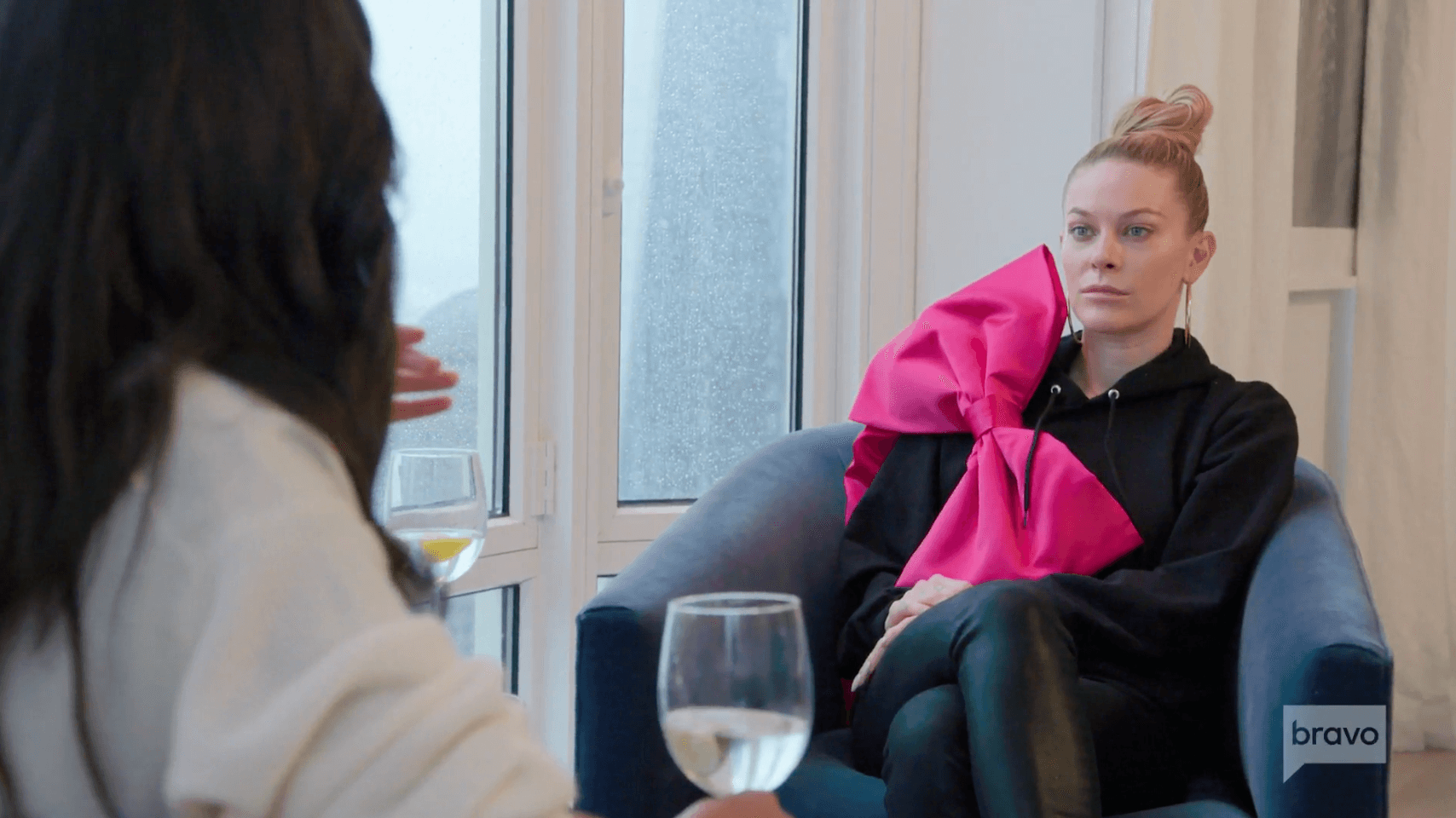 Leah wants to know how Eboni feels about the other women after the garden party. Even though Eboni is much younger than Ramona Singer and Sonja Morgan, she has no children, and does not seem to be a sloppy cougar, that wasn’t Eboni’s focus in her side commentary. She made it about race. She says, “Sonja and Ramona are completely unlike my existing friend group. Honey, I don’t even fool with this many white women on a regular basis. That said, I can be in any space, bitch.” Leah says she wanted to go to Burning Man last summer, but couldn’t, so she wants to recreate the theme as a Burning Man dinner in the Hamptons. Last year at Ramona’s house in the Hamptons, Leah was drunk, naked, and throwing the burning tiki torches and destroying the house. Let’s hope that isn’t what she means. 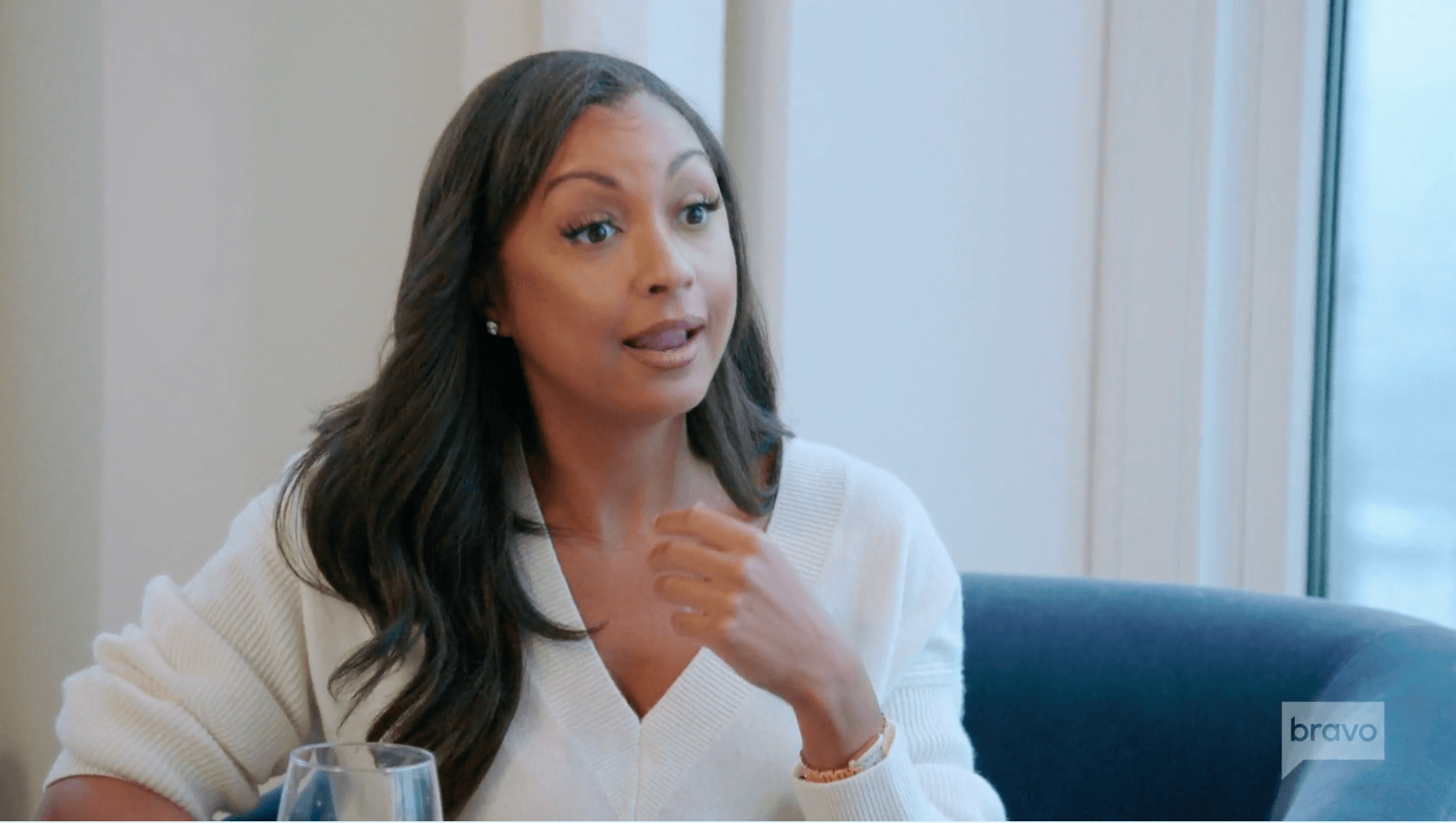 At Sonja’s townhouse, a healer, Aleta St. James, arrives.  Sonja feels like something is “energetically off” and needs a good dose of her old friend’s healing. J. P., Aleta’s assistant, is carrying an enormous red suitcase full of fun up the stairs. They talk about “leaky gut, crazy brain,” the energy of Sonja’s ex in the home, and how much Sonja is in tune with herself. Today, they are going to “go deep.” Almost immediately after Sonja saying she doesn’t live in the past, she immediately breaks down over her ex, John Adams Morgan. They divorced in 2006, and she feels guilt over what should have been on behalf of her daughter and herself. Sonja is tormented by where she finds herself during the pandemic. All over the world, this is likely resonating with people who have lost so much.

Leah and Eboni ride together to the Hamptons. Leah is sharing that her grandmother is dying, and Eboni is on checking her phone. Leah says that she can’t pretend that nothing is wrong when she’s upset, so the week might be hard for her. Luann de Lesseps  rolls up in a convertible to pick up Sonja. On their drive, they are each noticing potholes and hot men in other cars. As Eboni and Leah arrive, Ramona is mixing up the names of the workers who are there that day. Ramona says, “I get my help wrong.” And Eboni says, “She says she gets her help wrong?”

Ramona tells Leah and Eboni that Heather Thomson is coming for a couple of nights. Leah seems ready to stir it up already with Heather since Heather was talking about LuAnn doing “hard drugs” on that pirate weekend many years ago. Then Leah jokes that she invited Elyse Slaine and her sister, Sarah, to Ramona’s house. Ramona is so relieved the hear that it’s a joke.

Leah is excited to pick her room first. In comes Lower Level LuAnn and Sonja. Ramona and Sonja head outside and realize the pool isn’t set at the right temperature. Insert your favorite blond joke here as you watch these two try to adjust the temperature of the pool by hitting it (like an old black and white TV) and talking about finding the fuse box. They woohoo when they figure it out. When Marley pees on the floor, Ramona calls the dog, Marlo. Doesn’t Ramona know the name of Sonja’s dog?

Getting ready for the Burning Man party is quite the display of sequins, pasties, and stripper wear. Ramona on the floor cleaning up dog pee in her outfit is hilarious. Several times we see Coco on top of Marley, or is it Marley on top of Coco?

First up is a meeting with a healer named Devi. Ramona immediately goes in to try to figure it out. She keeps interrupting. The healer encourages everyone to share something on their heart, and maybe add something intentional. 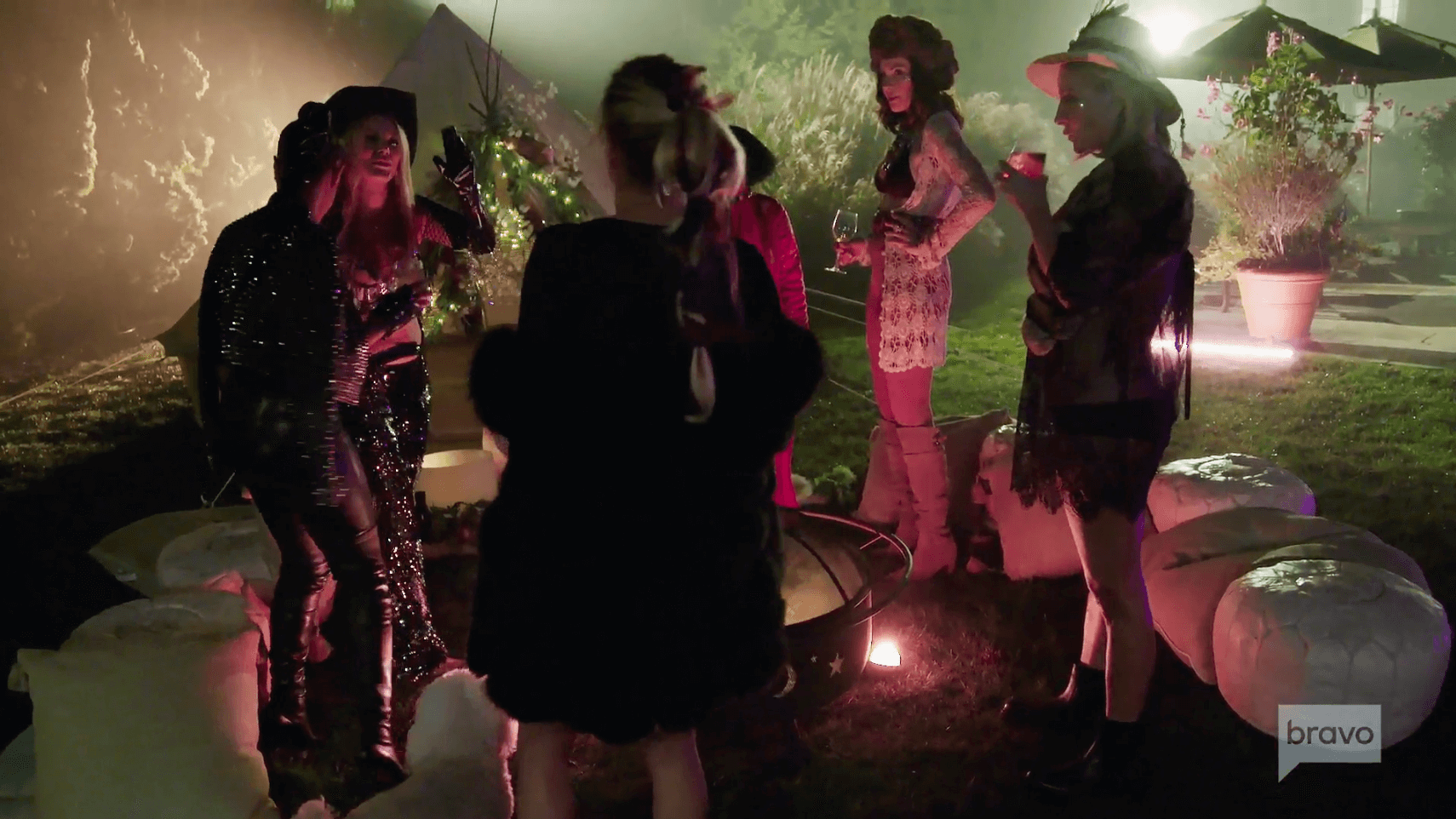 Leah says that she wants to bring good thoughts for her family as her grandmother is dying. Eboni says that she has on her heart a grandmother also dying. Eboni says that she is intentionally trying to redefine family since her grandmother and mother are her only blood relatives that she has. She wants a larger definition of family. LuAnn is looking to follow her gut more. Ramona kind of oddly reiterates what Eboni said about not having a family. And Ramona says she wants to pay more attention to her “real friends.” Sonja wants to work on being more vulnerable and trusting her friends with her feelings. Sonja says that she hides when she’s vulnerable, not wanting to burden her mom or her daughter. Eboni jumps in to support Sonja, saying it’s an honor to offer support for her mom after all that her mom has done for her. 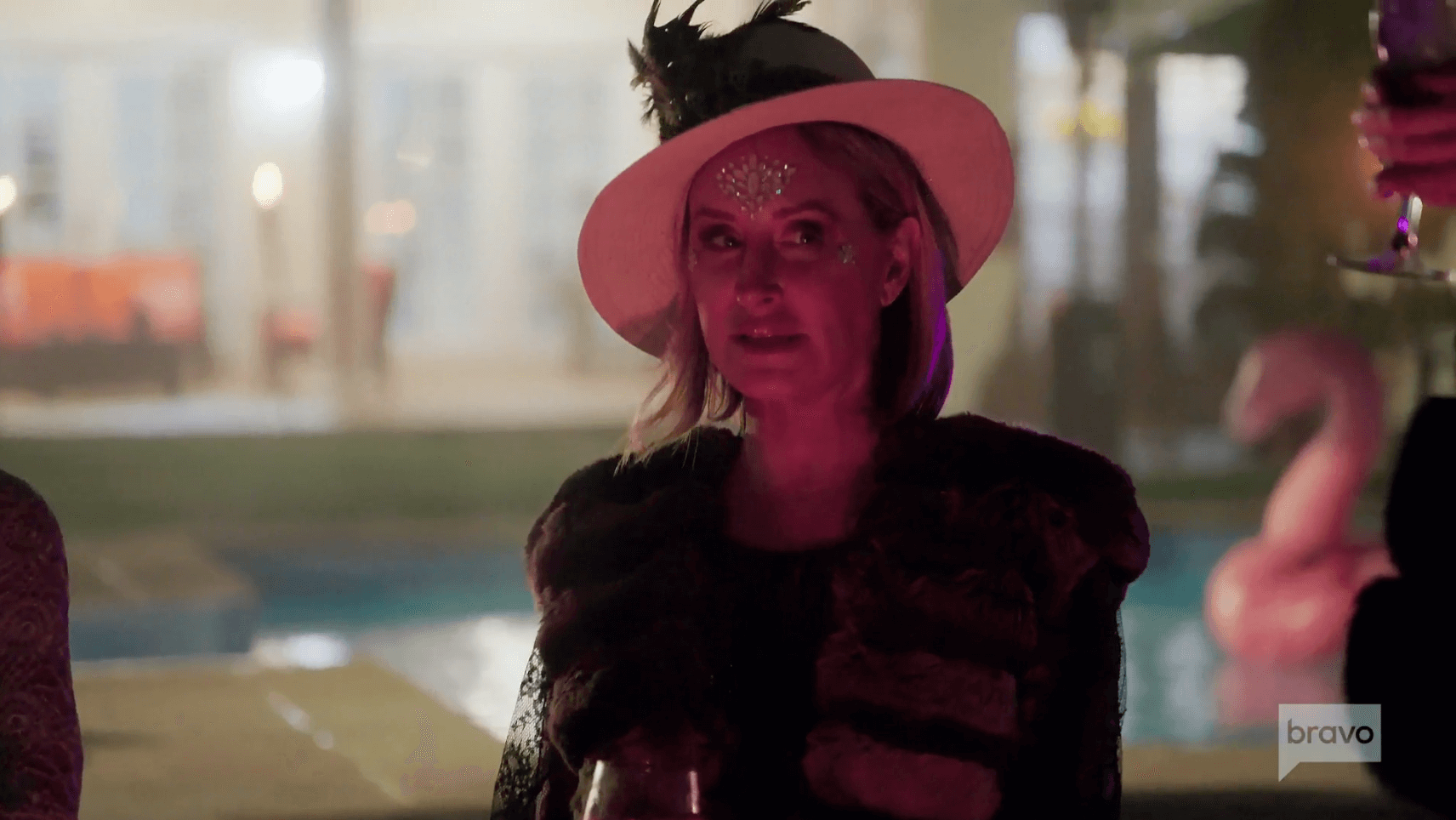 The healer tries to focus the group back to the purpose by using music and sound. Then Leah feels like screaming. LuAnn joins in. And Ramona screams, too. Ramona apologizes to the healer for asking so many questions [being rude]. And within minutes, the clothes come off and the pool fun begins.

They sit down to eat, and Ramona asks something odd. She asks her supposed best friend if her dog’s name is “Morley or Marley” even after calling the dog Marlo earlier. The group is distracted from Ramona’s cluelessness by a group of acrobats and artists who show up at the pool. Let the dance party begin! Eboni heads in the house. Leah comes into the house to check on Eboni. Eboni seemed to just need a minute to regroup after the healer.

Meanwhile back at the pool, they try one more group scream.

Next time, Eboni brings up the uncomfortable comment by Ramona about “the help.” Leah and Ramona fight over having “ten prints on” instead of the real issue of whether or not Ramona lied about donating blood plasma. And Sonja has an alcohol-fueled meltdown.