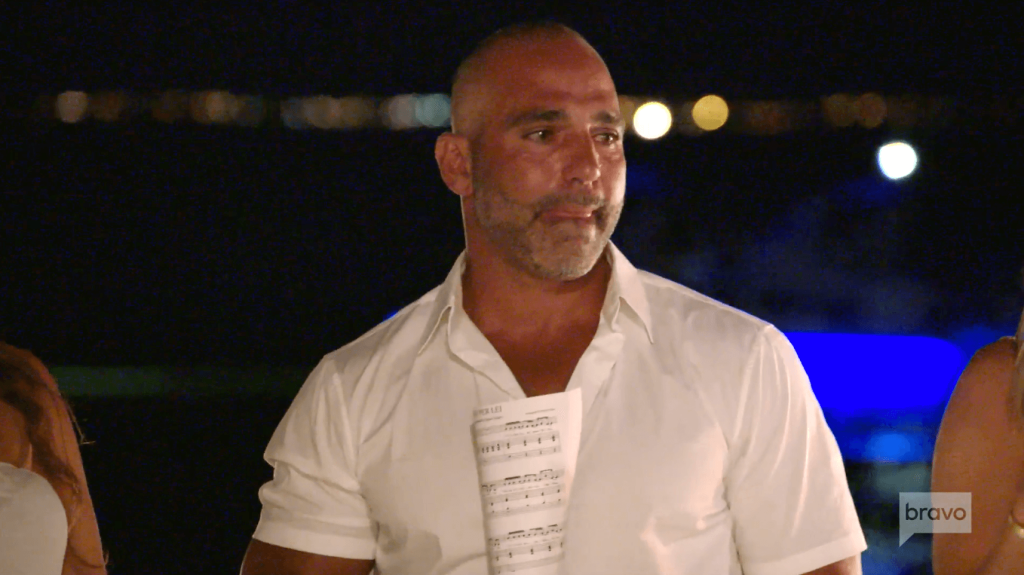 Last time on The Real Housewives of New Jersey, Dolores Catania was upset that everyone was talking behind her back about her relationship with David Principe. She yells to Frank Catania, “Frank, let’s go!” She stormed out of the cocktail party. It looks like this week is the big reveal of Teresa Giudice’s boyfriend, Luis Ruelas. The drama over Dolores’ relationship continues. And Jennifer Aydin has a huge fight with her mom. And Melissa Gorga and Joe Gorga argue yet again about their marriage and their roles within their marriage.

It’s autumn in New Jersey. And Jackie Goldschneider is planning a getaway for her birthday to go apple picking and wine tasting. Jackie is explaining the home and kid schedule to Evan Goldschneider. Is there another guys’ poker night in the episode? Dolores calls Jackie and pretends to have a doctor’s appointment in order to drive separately from the group.

Jennifer is redecorating the great room in her home. The kids are unimpressed. Jennifer talks about how much she can’t stand the furniture that is Bill Aydin’s style. It’s time for a change. Jennifer asks her mom to come by to see the progress. But her mom, on the phone, tells Jennifer that she’s upset. “You made a fool out of me.” She continued on, “Since you went ahead and made your father and I the subject of conversation” at the Turkish Tea Party. Jennifer and her father decide to just ignore her drama and go on with their day, but Jennifer is obviously upset.

Joe G. stops by Teresa’s house to organize the garage. Although, it looks like, he’s actually just taking some empty Amazon boxes out. Looking around that garage, how about taking those weird statues out, Joe. Joe G. says that Teresa needs a man in the house to do this for her. Joe G. and Teresa talk about her boyfriend. Joe G. really loves Luis and tries to get Teresa to admit that she loves him, too. Teresa wants to keep things private until she’s sure. She probably doesn’t want the daily grilling that Dolores gets about David.

Margaret Josephs has a photo shoot at her house for her new book, “Caviar Dreams, Tuna Fish Budget: How to Survive in Business and Life.” Marge Sr. arrives with curlers in her hair to shoot the back cover of the book. Joe Benigno is standing on the sidelines, grinning, looking so proud of The Marge.

Frank and Dolores are planning the joint birthday party for their children, Frankie and Gabby, who have birthdays a week apart. David arrives to the dinner. Dolores brings up, in front of her family, that her friends took a poll about who thinks the Porsche is a diversion from a ring. David is unbothered by the gossip and chattering of Dolores’ friends. Dolores is happy that David loves her kids.

The girls arrive at Jackie’s house to eat breakfast before the drive to Jackie’s birthday trip to Warwick Valley Winery. They seem confused that Dolores talked for a year about the ring and now, dropped the topic. All of the girls pooled money together to get Jackie a pair of earrings. Jennifer tells the group about the phone call with her mom. Jennifer is upset that she and her mom aren’t speaking. Melissa gets an emergency phone call that Joe G.’s heading to the hospital. He thinks it might be a kidney stone.

From the van ride, Jackie calls Dolores. Dolores tells Jackie to send Joe G. to Paterson and David will be there. Margaret thinks it would be ironic to have David take care of Joe G. after everything that Joe G. said about David at the party. Margaret wastes no time telling Teresa that Melissa was talking about Luis.

They arrive at the vineyard. First up is a ride to the apple orchard. Dolores goes right in with the girls asking who voted for or against in the poll about her relationship with David. The argument continues during lunch and wine tasting. The other guests at the vineyard’s restaurant are curious about this table full of women and cameras.

Margaret is planning a combination Halloween party and birthday party for Joe. B. The topic of David comes up again and whether David will be at the party. Dolores goes on her apology-leave-me-alone-I’m-happy tour.

Melissa and Joe G. talk about gender roles in their relationship. Joe G. and Melissa rehash what they have been fighting about all season. Joe G. says, “You know what I want? I want my old wife back—that loveable, sweet girl.” This is just a fight about what he wants versus what she wants. And he thinks he’s right because it’s not what he signed up for. Joe G. thinks that he has supported her singing career and helped build her boutique. As he walks away he says, “Go be this powerful businesswoman. Go be whatever you want to be. We’re done.”

Milania Giudice is helping her mom, Teresa, get ready for a date. Milania seems supportive and likes Luis. This episode closes with Luis showing up with flowers to pick up Teresa for a date. Next time, it looks like the debut of Luis!