In Part 2 of the reunion, The Real Housewives of Atlanta reflect on the trip to South Carolina and look at Drew Sidora and LaToya Ali’s first season. It all started with wig shade and ended with a holy rumor.

Andy Cohen rolls a montage of fights between Drew and LaToya. LaToya makes it sound like bad wigs are the end of all civilization. These women shade wigs, edges, and call out bad hair at public events. Wasn’t it Kenya Moore who hired the band for Marlo Hampton’s wig line event? Now Kenya is upset that Drew brought Kenya’s haircare line into this argument on social media. 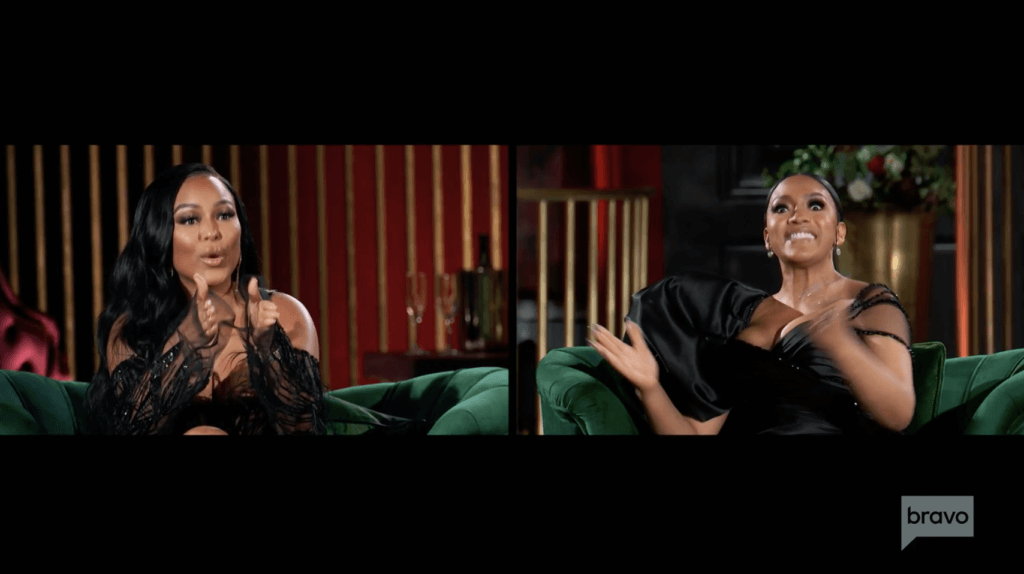 The attention turns to LaToya and Kenya. Andy introduces the montage by asking, “Was it just a girl crush, or be honest, was someone wanting Moore?” Kenya admits she has a “cute crush” on LaToya, but she rattles off her list of disappointments. Then LaToya throws out the allegation that Drew cheated on her own husband by kissing LaToya. Drew denies it. Kandi Burruss admits that she saw it. 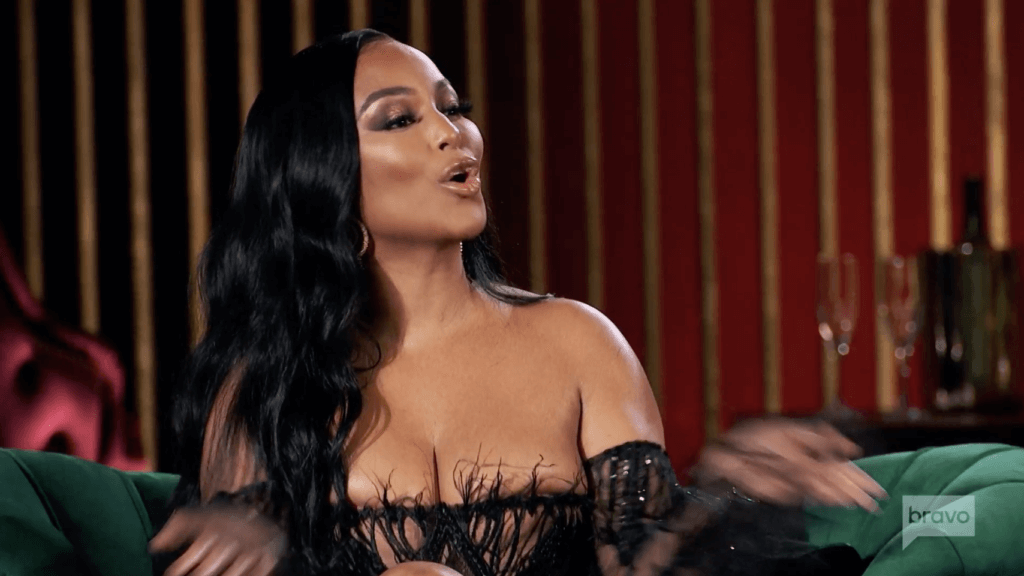 Then the conversation turns to LaToya talking behind Kenya’s back about Kenya’s divorce. Kenya had shared with LaToya about her rough relationships with the women on the show. Kenya was expecting LaToya to keep her confidence. 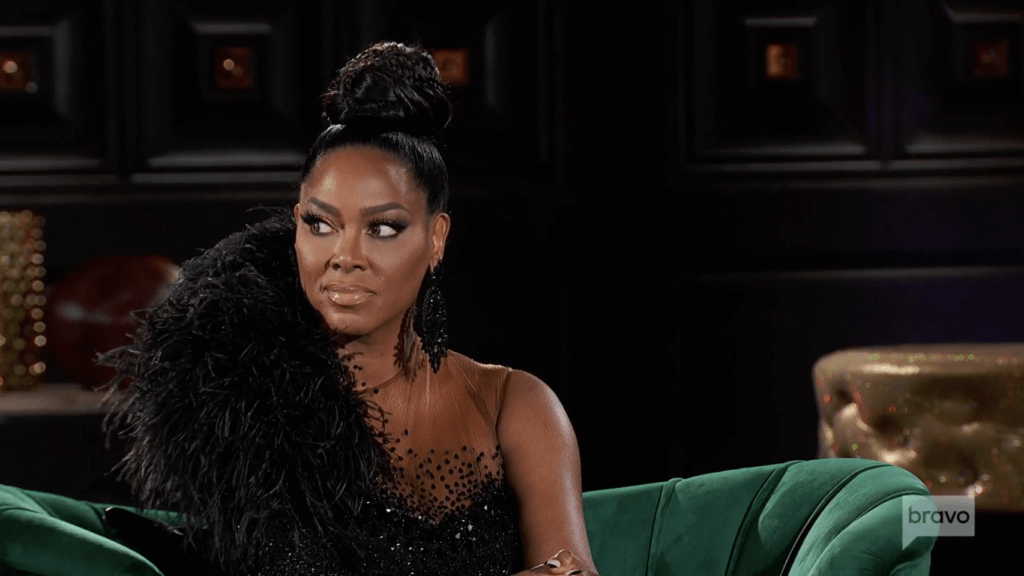 As Shamea Morton and Marlo walk to the set, Andy announces, “Oh my God, I think I’m straight.” Andy asks Shamea, “Who is the auntiest aunt here?” And Shamea says, “Marlo.” Then Marlo spins around in her dress to show that her outfit isn’t “auntie-wear.”

Andy introduces that Charleston trip and Kenya’s terrible hosting skills by drawing on a murder mystery theme. “It was Kenya by the pool with a single crab cake.” The weekend didn’t start off well when the rest of the girls were sitting in the Sprinter van and find out that Kenya not only took her daughter but also flew in a private jet. The moms in the group wanted the option to bring their babies. Kenya digs in, “If they wanted to bring their child, their child would be there.”

Kenya Moore goes straight at Kandi, telling her, “You arranged to have a whole dick-in-the-box come, but if you wanted to arrange to have your child there, I think that you could have made it happen easier than I made it happen.” Then Kenya goes low implying that the others are putting their mom guilt on her. Porsha Williams claps back that she’s a good mom. Andy and Kandi have an odd Mistress Angel-I’m a good mom, exchange. Andy says that Riley Burruss has made claims that Kandi was always working when Riley was growing up. 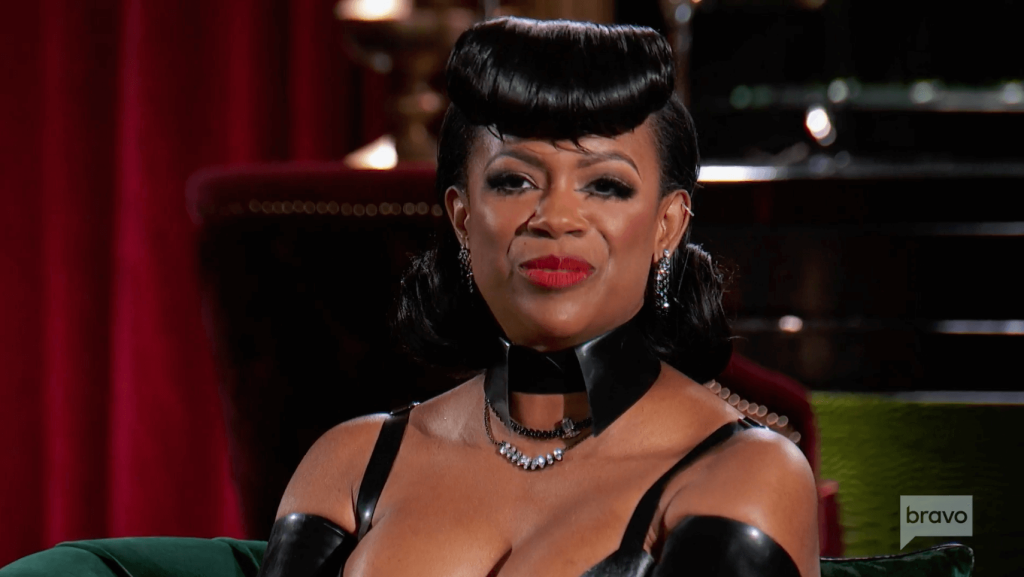 Then Kenya is really shady telling the group that she tried in the beginning, when Drew joined the show, to give Drew advice. And then she goes after Drew and claims she tried to help Drew with her “body issues.” Drew is upset and explains her diagnosis is a type of endometriosis and she suffers from swelling and pain. Drew says that she has to have a hysterectomy. 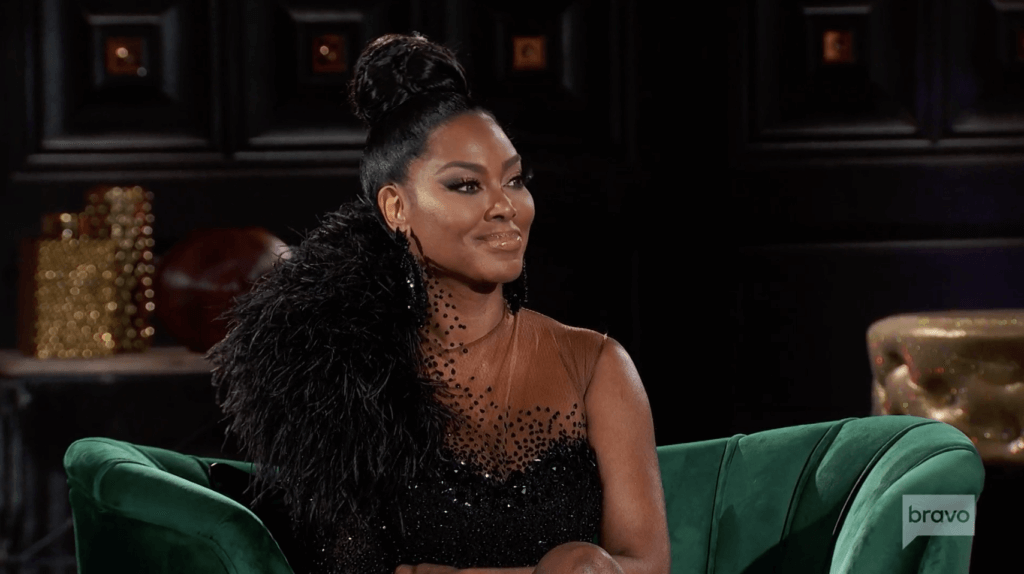 Cynthia Bailey has to be upset that her wedding is finally the topic halfway into the second reunion episode. Kenya’s terrible hosting skills at the Bachelorette party and Bolo the Entertainer (Michael Bolwaire)’s other skills are going to have more airtime than the wedding. Cynthia’s wedding to Mike Hill was on 10-10-20. Cynthia seems very happy. There was criticism to have a large wedding during the pandemic. Cynthia is emotional when she talks about Mike’s daughter not being there and her own relationship with her father. And Kandi rolls her eyes when she hears that Cynthia and Mike never finished a post-nup.

Andy moves on to Kandi and Porsha’s up-and-down relationship through the years. Kandi and Porsha have been working towards a friendship and seem to enjoy each other more now. Then Marlo pipes in that Kandi and Porsha seem extra close after the dungeon, and it’s almost like Kandi has “some dirt on her or something.” Then Kenya jumps in to shade Porsha saying, “You still have to keep one eye open on someone that has hurt you so much.” 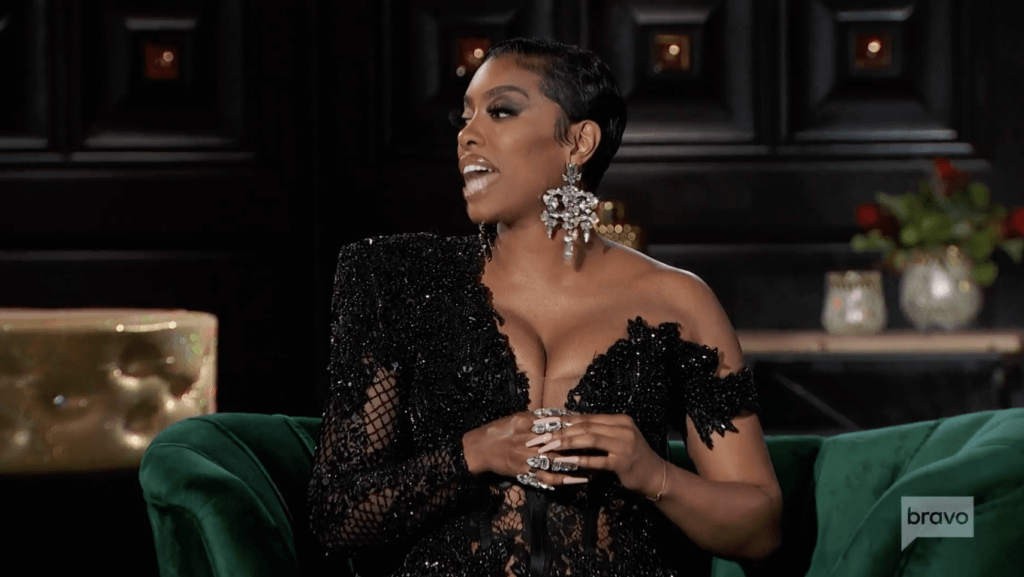 And now, more dungeon talk. More “Bolo after dark” footage is shown after the women covered almost all of the cameras. Kandi declares Andy’s dungeon name is “Silver Bullet.” So let the questions begin… Andy asks about the coffee table action. Porsha’s memory is fuzzy about LaToya “doing a thing on me or whatever.” Andy makes the whole dungeon party about female empowerment. Ok, Andy. Sure.

Marlo is still taking the conversation back to something went wrong in South Carolina where her friendship with Porsha changed. Marlo gets Shamea fired up by mispronouncing her name and calling her Shamila. Marlo and Porsha argue over who caused the rift in their friendship.

Next time, on Part 3 of the Real Housewives of Atlanta reunion, it looks like more drama and the discussion moves to LaToya and The Prophet. How many more times are we going to hear about the messed up baby blessing? And, Andy asks if anyone has heard from Tanya.