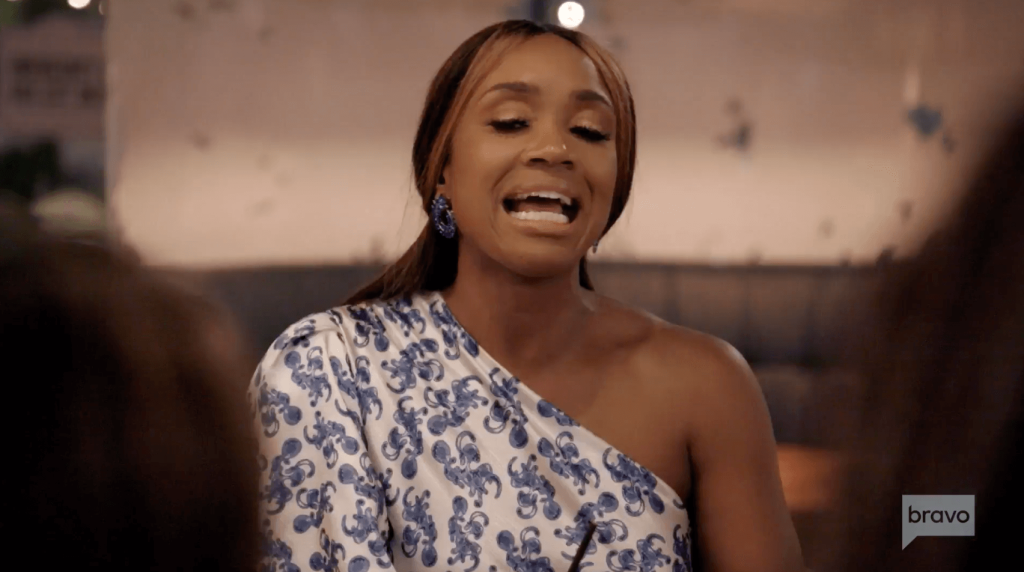 Welcome back to the world of medicine and mess! This week on Married To Medicine, we catch up with the crew still in D.C. — and the ladies are enjoying themselves at a restaurant for the evening.

The women sit down and Dr. Heavenly Kimes ask Toya Bush-Harris what’s good at the restaurant, and what were they known for. After briefing the ladies on the restaurants home-grown, organic history —  Anila Sajja asks Toya what was said. Toya appears to not want to breath life into Heavenly’s “devilish eggs” comment and tells Anila it was nothing, but Anila insist on knowing what was said; causing Toya to repeat “Didn’t I say it was nothing?” Whew, the tension is THICK! 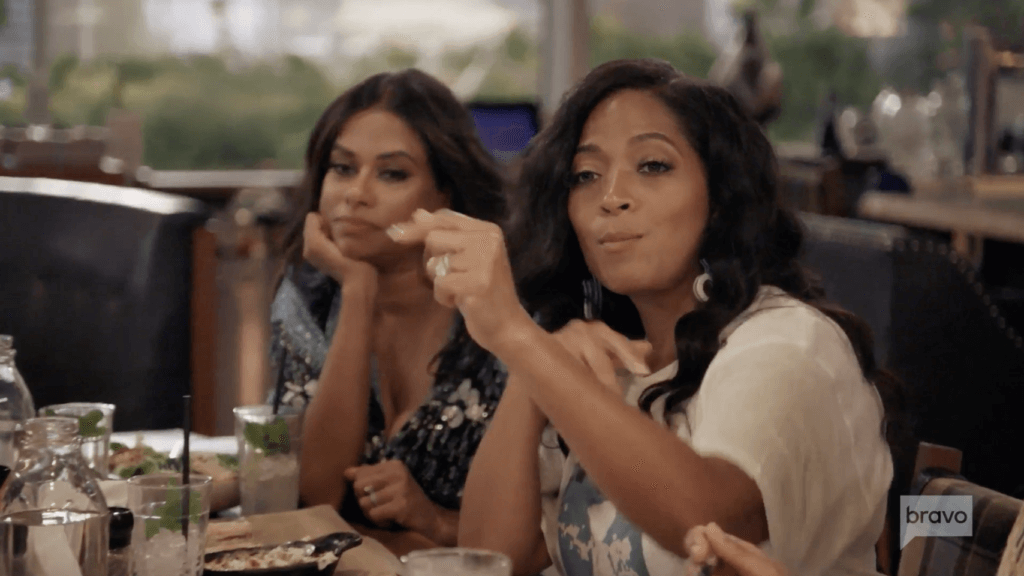 Dr. Jackie Walters attempting to make light of the situation states “Toya, Anila said she is not your little sister”, where Toya responds with “I know she aint, cause if she was, she’ll catch on quicker.” Heavenly taking her moment says “ No, she’s your little muppet” and the ladies go silent.

We can always count on Heavenly to add some shock value to the conversation. Heavenly laughs Anila’s distain off, and Anila asks if everyone should start calling each other names. “Should I call you Miss Piggy?” Anila said while Dr. Simone Whitmore cracks up! WHEW!!! I know that’s right Anila! Fire back at Heavenly! Heavenly back-peddles and apologizes, saying her favorite line that “she was just playing.” Looks like the new girl got some fight in her after all. Kari Wells and Lisa Nicole Cloud arrive, and we’re reminded of Kari’s smart comment about “Dr. Damon Daddy”, while Toya tells us that Gizelle Bryant is joining them and how she met Gizelle at Kenya Moore’s baby shower. Gizelle Bryant and (her side kick) Robyn Dixon arrive and greet the ladies with hugs and smiles. Robyn got these ugly braids but they’re just visiting, so thankfully we won’t have to see them long. 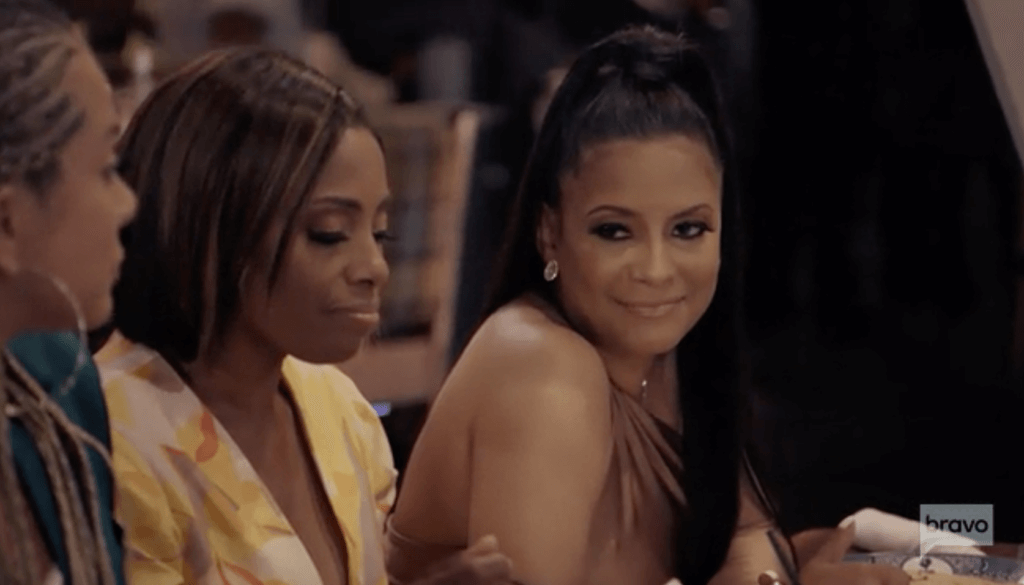 Dr. Contessa Metcalf says to Gizelle that her “husband” touched her soul the other day, with his preaching. Contessa is of course referring to “Pastor” Jamal Bryant of Atlanta. Gizelle makes it clear that the two are not together, and Lisa Nicole asks whether the two reconciled or not. Gizelle lets the group know that her and Jamal are back together, but he hasn’t put a ring back on it yet. We all know this story and will wait for Potomac before we give them any more life tonight. 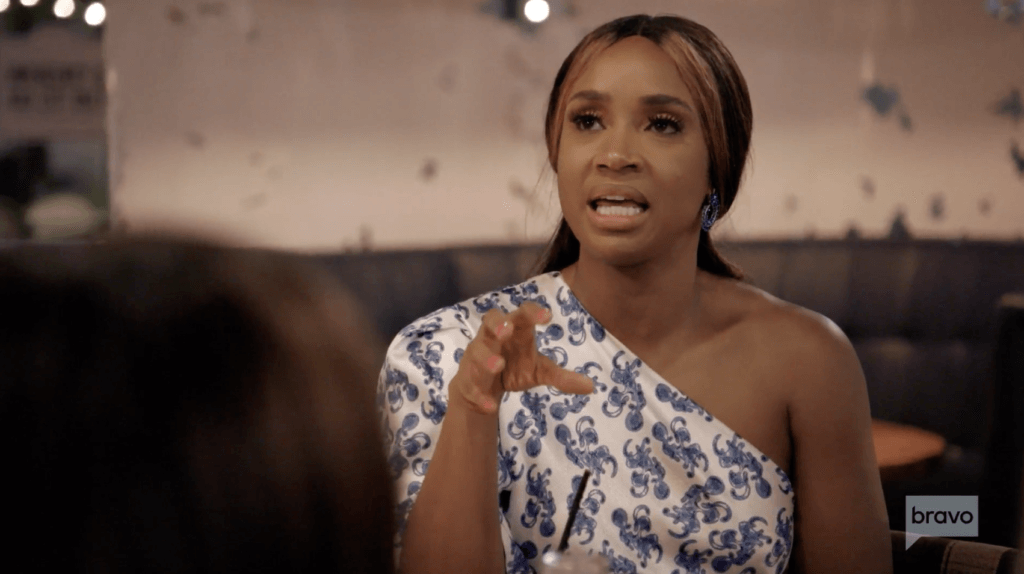 The husbands are back at the house, where Dr. Damon Harris lets the guys know that Jamal Bryant is coming to join them. The fellas are eating pizza and reminiscing about their trip to Mexico. Jamal Bryant arrives, and they go through the pleasantries. Back at the restaurant, Lisa Nicole asks the women whether they think their husbands, went through a mid-life crisis. Contessa says she thinks so, and that Dr. Scott Metcalf will turn fifty soon. Dr. Jackie said, “He looks great” and Contessa drops a bomb by saying “He aint acting great”. 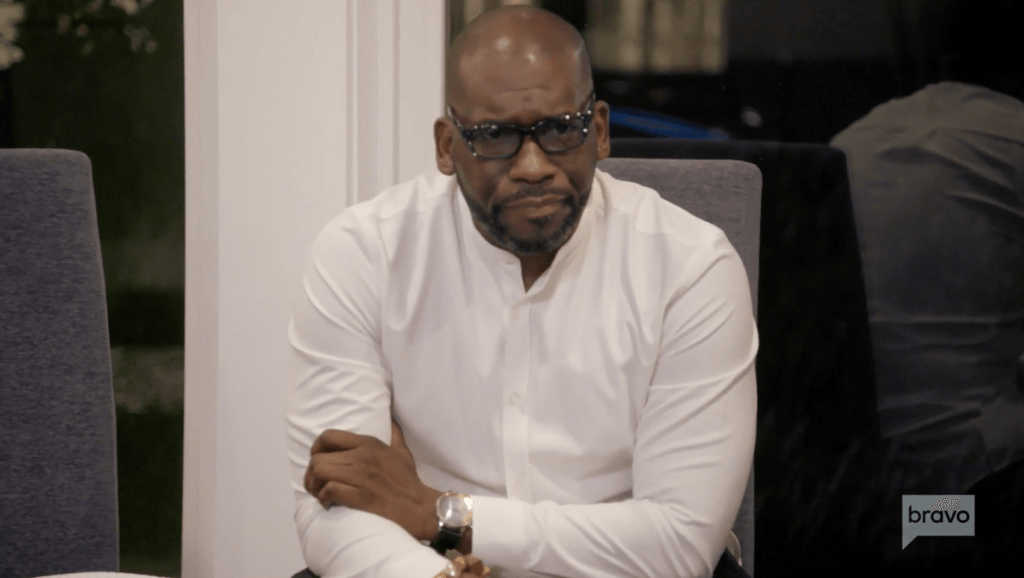 Before anyone could get a word in, Contessa begins talking about men cheating; and how women tend to internalize it by blaming themselves. In their confessionals, the women clearly see somethings wrong, but Contessa isn’t fessing up to anything. Contessa says Scott isn’t being as sweet or respectful as he normally is. Surprisingly, Toya gives Contessa advice to have Scott talk to Eugene. Toya gives the table the rundown on Eugene’s testosterone issue, while Eugene shares with the guys that he lets Toya do basically anything to him LOL. This trip is hilarious already, and I believe we’re only on day two of D.C.! Gizelle asks if Lisa Nicole is still married, and she confirms her marriage is stronger now. Somehow Contessa takes control over the conversation, and it seems she has something to really get off her chest.

The next day, Damon and Heavenly are discussing the day ahead, while Simone and Cecil discuss Contessa’s comments from dinner. Cecil not wanting to get in it, is confused since Contessa and Scott wore matching Love t-shirts the day prior. In Scott and Contessa’s room, she brings up the conversation also but asks him whether he thinks he’s going through a mid-life crisis. Admitting he needs work with his patience, Scott seems to verify some of the things Contessa says. Let’s hope they keep the line of communication open, and there’s no cheating involved. Everyone shares mimosas and food before heading back to Atlanta, and Eugene does a toast for a job well done. Heavenly is thanked for the wonderful trip and the crew head back home.

Back in the ATL, Contessa kisses her kids while they play in the living room. Dr. Jackie is in the office, and Simone is joking with her staff. Toya and Anila are riding together with the kids and begin talking about school and taking shifts driving the carpool. After dropping the kids off, Toya expresses how much she enjoys driving her kids to school. Somehow Anila got on the conversation about her housekeeper, while Toya asks her if she really needs the housekeeper in the first place. It’s no secret that these women like to spend, but Anila seems very irresponsible when it comes to money and the bills she’s racking up. Toya knowing all too well how money problems affect the household, is trying to look out for Anila; but it doesn’t seem like Anila wants her advice. You tried Toya… Back at Heavenly’s house, she has dinner delivered while briefly fighting a wasp with Alaura.

Damon lets the kids know how the trip went, and the conversation went to the importance of their work and Black Lives Matter. Damon told the story about his experience with policy brutality, and they had a great conversation as a family about the injustices Black people continue to face. There’s no doubt that more work needs to be done, but its awesome to see these professionals on the front line; being on the right side of history. 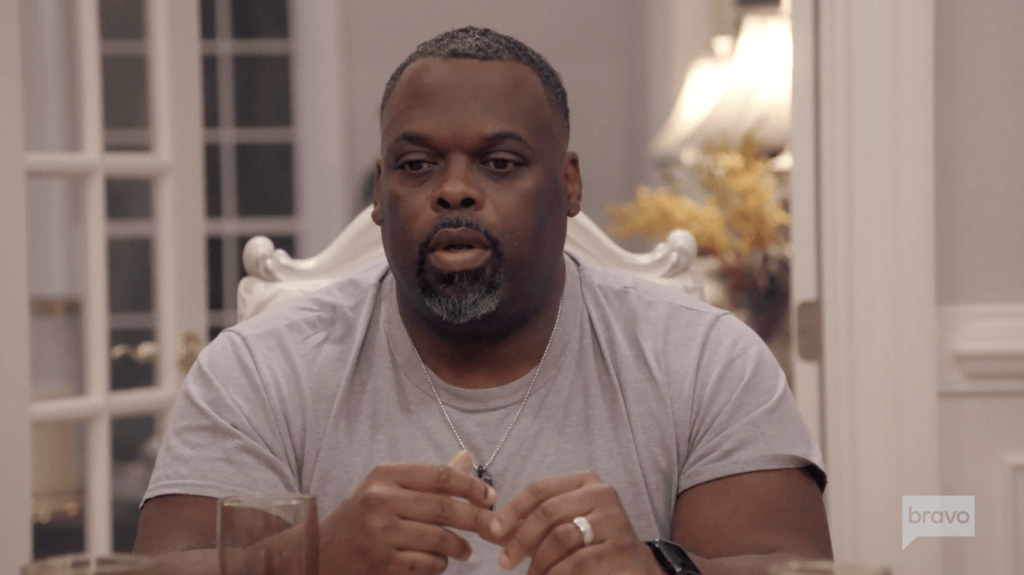 The next day, Jackie calls Heavenly and invites her over for a dinner with Simone and Quad. Heavenly being hesitant, wonders whether attending would be a good idea or not. Claiming to be heartbroken, Heavenly asks Jackie if she can invite Anila…without Toya. Wanting to know Anila outside of Toya, Heavenly wants to see if the two can connect on some level.  Let’s hope this is the beginning of a beautiful friendship.

At Contessa and Scott’s office, Contessa meets with her business consultant, and is in straight business mode. After a quick walk through and some suggestions for the practice, Contessa asks her friend whether she thinks couples can work together. There’s conversation around the do’s and don’t of working with your spouse; while Contessa admits that her and Scott can have bad arguments sometimes. Suggesting for couples counseling, Contessa considers and switches gears by joking about the potential for entanglements. They’re in the process of hiring staff, but Contessa made it clear that no retired supermodels will be working around her husband!

It’s the day of Jackie’s dinner party, and the spread looks beautiful! Jackie’s excited for the ladies to see her new house, while pretending she made the food. Heavenly picks Anila up and briefs her on the drama with Quad. Simone arrives and is so excited about Jackie’s renovations. Simone not expecting to see Anila, questions Heavenly about this new friendship. Anila admits that Toya knows she’s there, and Simone makes a statement “Not to let her get in between your friendships.” Quad Webb-Lunceford arrives with gifts in hand, while Heavenly remains silent. Jackie gives the ladies a tour of her new house, and the women are in awe! Once the tour’s complete, dinner is served. The first meal comes out and Jackie begins the conversation with Anila but begins talking about Heavenly and Quad’s friendship. Being bold Anila asks, “So what is going on with this misunderstanding?’ obviously referring to Quad and Heavenly. 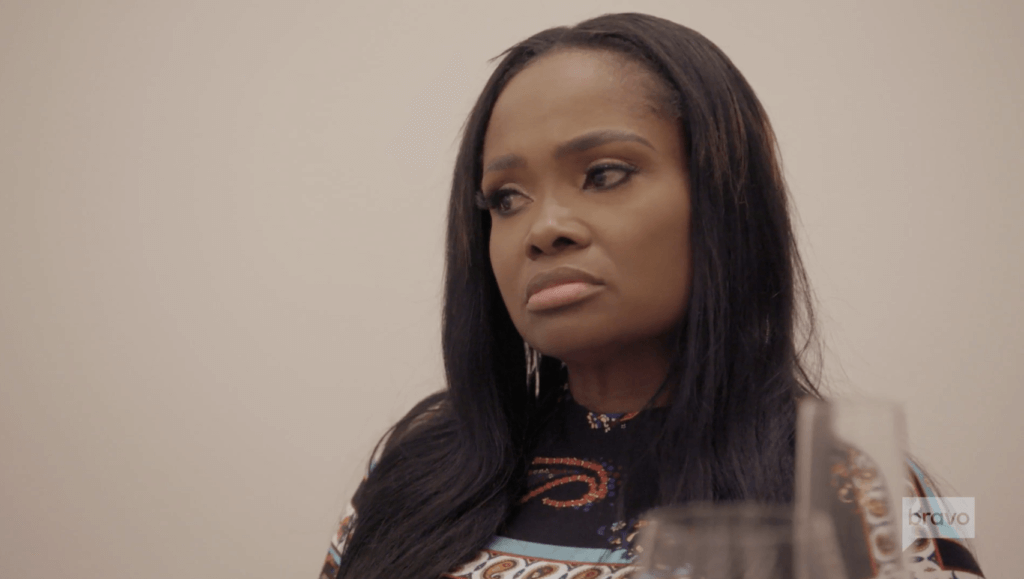 Quad admits to that she read the message all wrong and Heavenly admits that she’s more hurt than mad. Quad attempts to explain why she went negative, and something triggers Heavenly, because she begins cursing Quad out. Seems like Heavenly wasn’t a fan of Quad’s tone, and now the two are in a yelling match. Jackie gaining control over the room, explains that they’re all tense but that they need to move past this situation. Quad asks Heavenly to meet her halfway, and Heavenly obliges. 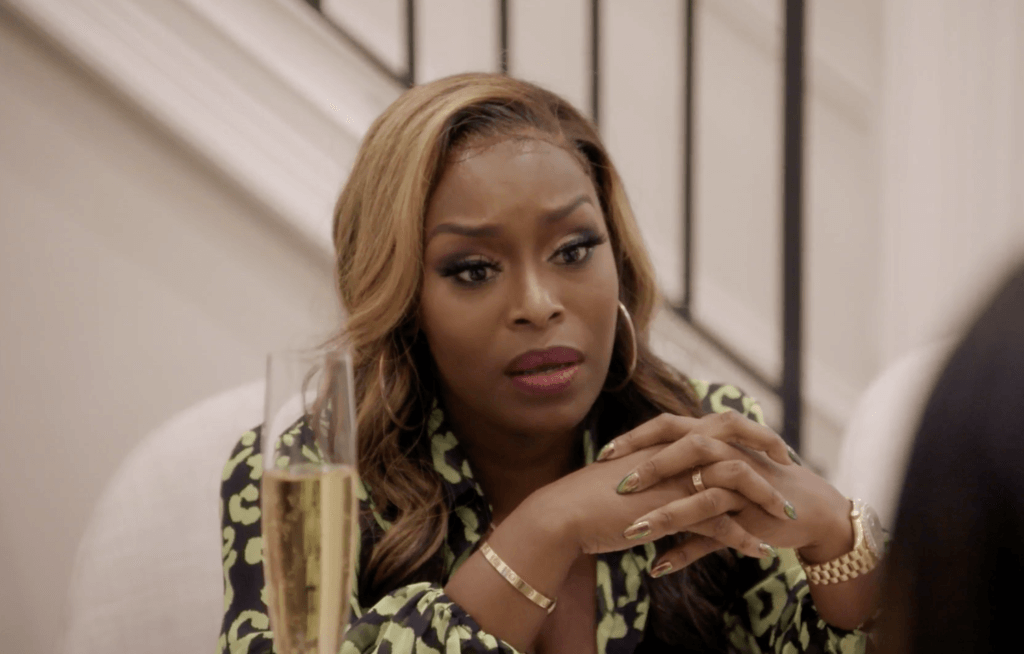 The two hug and all seems forgiven with Heavenly almost lifting Quad’s dress. Dessert comes out and the ladies enjoy the rest of the night, in Jackie newly renovated house. Whew! A lot happened, and there’s even more to come. See you next week!