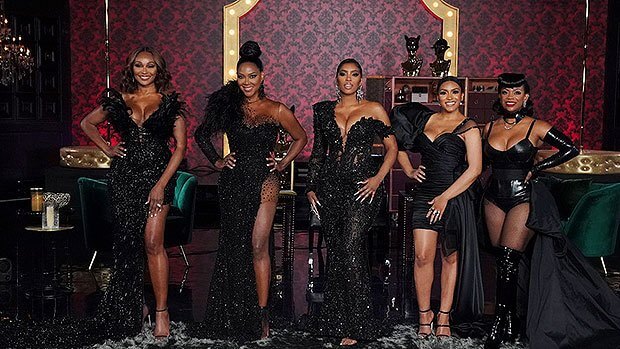 For The Real Housewives of Atlanta, it’s reunion time! How many times will we hear Bolo the Entertainer (Michael Bolwaire)? This season was busy with cat fights, bad hosting, activism, and, that burning question, what was Ralph Pittman doing in Tampa? Andy Cohen will get to the bottom of it in Part 1 of a three-part finale.

The reunion set is a dungeon theme. Even Bolo’s costume is part of the décor. Kandi Burruss  is dressed as Mistress Angel. Andy asks Kandi if she brought her whip. Kandi says, “Props don’t go well at reunions.” I’m sure she’s referring back to Kenya Moore’s bullhorn takedown of Porsha Williams  a few seasons ago. Or maybe Porsha’s grabbing of Kenya’s scepter.

Andy starts with how everyone got a little “thicker” during the pandemic. They look at footage and discuss how they looked. Kandi says she looked like a “frumpy aunty.”

The first set of questions are for Porsha and her love life and social activism. Porsha admits it’s been a while since she’s had a hotdog (Dennis McKinley). The cast discusses “turning Georgia blue” during that last presidential election. The question turns to whether Kenya believes that Porsha’s activism is legit. Of course, Kenya is upset that Porsha didn’t include her in the PSA. Porsha says, “While you’re talking from the curb, what have you done in the streets.” Kenya is immediately on the defense about all of her work for “the cause.” Andy asks Porsha if there is an organization that she wants more people to know about. Porsha says, “Until Freedom.” Porsha gives an update on her relationship with Dennis. She said they are just trying to transition to being “family.”

Next Andy focuses on Kenya, the resident “Dick Detective.” The montage starts with Kenya’s divorce from Marc Daly and LaToya Ali talking about it around town. Andy asks Kenya where things stand with Marc. Kenya says that they are not officially divorced, but she has full custody of their daughter. And Marc is not asking for alimony. Kandi and Cynthia Bailey weigh in on their frustration with Kenya hanging on to a marriage that made her so clearly unhappy. Kenya says that Marc was fighting for all the wrong things in court. He was fighting for their baby to not be on the show, and according to her, “not about custody, not about time being spent, not about child support.”

Kenya Moore does admit that she’s chasing something that she never had from her mom. And she’s chasing emotionally unavailable men. Kenya mentions that her mom has sent gifts and cards to Kenya’s daughter. Then Andy asks Drew Sidora why she is talking about Kenya’s marriage. That slight seems to go back to Kenya calling Drew and her husband “strays” who wandered onto the show. Kenya and Drew had a social media spat where Drew clapped back that at least her family was all under one roof. Then Kenya goes low and says, “Your family is not under the same roof. Your baby daddy is under the roof of a jail.”

Andy brings up Kenya’s Halloween costume. Bravo issued an apology for Kenya’s insensitive Native America costume. Kenya says that she has Native American heritage and didn’t realize that “customs are not costumes.” Kenya admits that she should have known better. Porsha and Kenya talk about Kenya’s double standard on forgiveness. According to Porsha, Kenya wants instant forgiveness, but also wants to hold things over others’ heads and weaponize their mistakes. Porsha says, “When someone turns and decides to be better, let them be better.”

Andy welcomes Drew’s husband, Ralph, to the set. Then it takes less than a minute for Andy to ask Ralph, what is in Tampa? In Drew’s montage, there were clips of her son with his birth father. Drew says that her son and his father are slowly building a relationship. Ralph was wonderful with Drew’s son, facilitating the father-son relationship.

Then Andy asks Kandi about how she felt seeing that play out. Kandi said it was important to see, and she was emotional. Kandi gave them credit for trying to reunite Drew’s son with his biological father. Kandi said that her daughter, Riley Burruss, has walls up because that relationship never happened with her dad, Russell “Block” Spencer. Kandi shares that Block is now paying his arrearage in child support. Drew and Kenya go another round in their fight over social media posts about the situation. Drew was disappointed and upset that Kenya would re-tweet a post about Drew’s son.

At Drew and Ralph’s anniversary dinner, Andy asks why Drew brought up Tampa again. As Drew talked about how she’s never had a reason to believe that Ralph was unfaithful, Mistress Angel, Kandi, gave the biggest eyeroll of the night. So, Ralph, Andy asks, “who or what was in Tampa for three days?” Ralph said that he just needed to get away. Kandi jumps in to tell Ralph that he should have been more forthcoming with information sooner. Andy asks Ralph if he was upset after seeing the South Carolina trip footage. And Ralph admits he was definitely upset! Drew and Ralph discuss openly that their marriage hasn’t been easy and counseling is helping them. The topic turns to Kenya flirting with Drew’s husband. Then as Kenya denies fawning more than one time, Andy rolls footage of Kenya and Apollo Nida.

It looks like LaToya Ali is coming in hot. LaToya says that she’s glad to be there with all of her girls, “except for Sponge Bob.” LaToya goes after Drew’s outfits on the show. And Drew addresses her as, “Petty Peach List.”