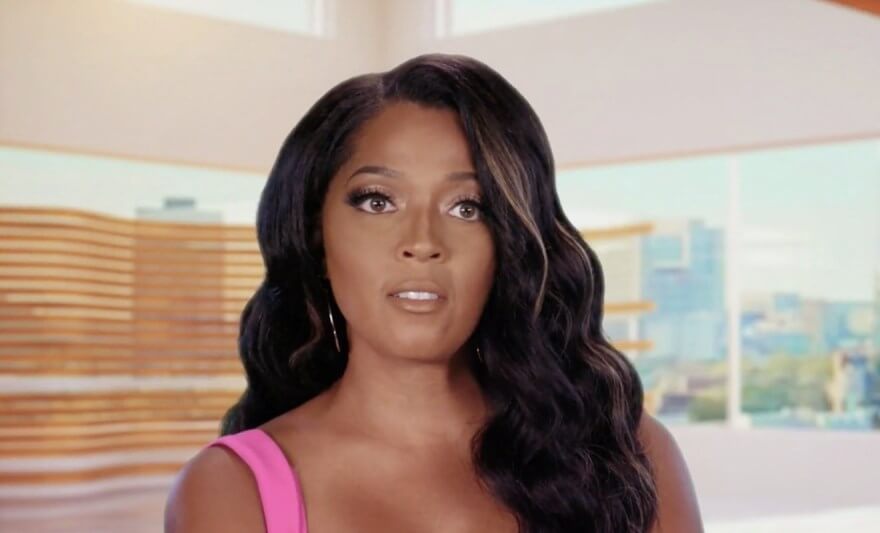 This week on Married To Medicine we start right where we left off, at Toya Bush-Harris house, where Kari Wells just dropped a bomb on Toya and Anila Sajja. Apparently, Dr. Contessa Metcalf and Dr. Heavenly Kimes told Kari that they wanted to “steal” her away from Toya and Anila, because she was the “smart” one in the group. 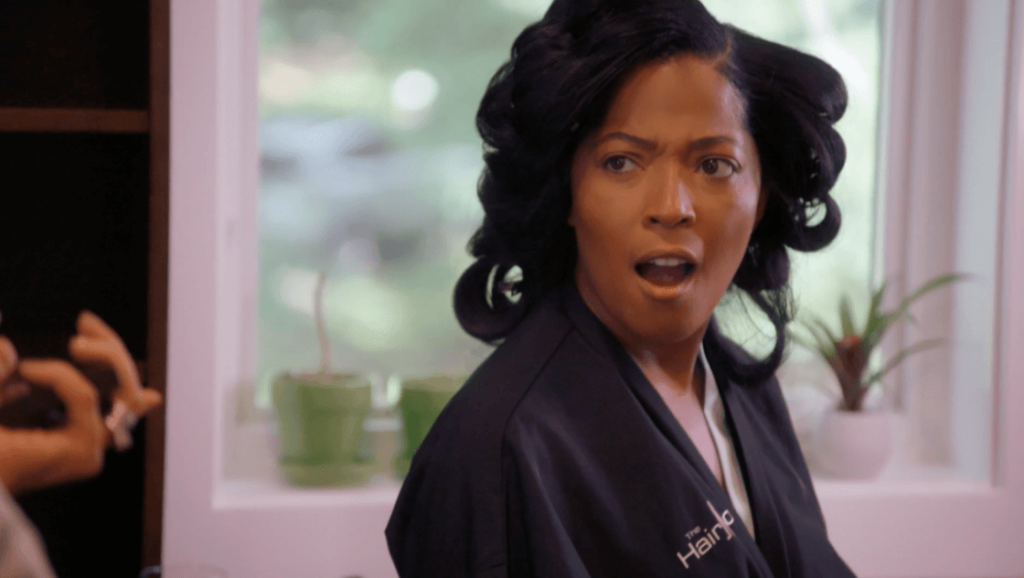 Toya clearly being over Contessa, believes Kari at face value and we know sh** is about to hit the fan. Slightly annoyed by the new revelation, Toya switches gears and focuses on the meal that Dr. Eugene Harris and Dr. Kiran Sajja have planned later. The doctors are on the bus heading back to the house, when Dr. Jackie Walters makes a joke about inviting Madam Vice President Kamala Harris over for dinner. The ladies join in on the joke in their confessionals, letting us all know they never believed Mrs. Harris was coming.

Anila goes into the dining room, where she sees Curtis Walters and Cecil Whitmore eating at the table. Anila had the nerve to ask these men, to help her take pictures for her blog. I could’ve told her the answer to that, but Cecil put her out of her misery. Once Anila, Dr. Kiran, Dr. Eugene, Toya, and Contessa were outside sitting down; Kari took it upon herself to bring up the “smart” conversation, once Contessa walked away. If Kari was really about that life, she would’ve asked Contessa to her face what she meant by the comment, but I digress.

Dr. Jackie has invited other black doctors in D.C. to join them at the house tonight, and these women are just as beautiful as our M2M ladies! The husbands are in the kitchen prepping for dinner, while the rest of the ladies gather by the pool to play a game of Jenga. The vibe was friendly until Heavenly came out of the shadows. Greeting the women with elbow pumps, one of Jackie’s guest make a comment about being invited, but have yet to be fed. 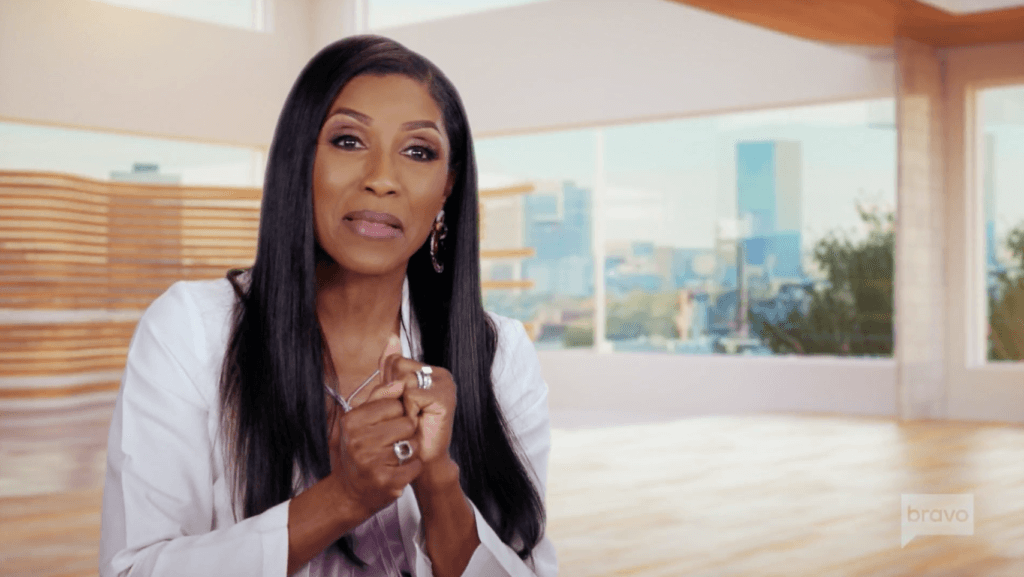 Heavenly taking her devilish que, tells the woman “I didn’t invite you b****; I don’t even know you”. Hard eye roll…Why did Heavenly have to go there? Everyone tries to laugh it off, but the damage is done. Everyone begins mingling, and we meet Eugene’s mother and brother. Toya offers her mother-in-law a drink before she heads over to the rest of the women. Toya is not letting this comment about her and Anila go. She is seething and ready to pounce!

Fun insight into the relationship between Toya and her mother-in-law — Toya shares that her mother-in-law doesn’t like her as much as she used to, in a talking-head confessional. I’m hoping Toya continues talking about this strain relationship soon. Toya sits down and asks Anila what’s going on, and Dr. Simone Whitmore wants to play a game. Simone is known for her games, and this time she wants the group to talk about how they can move forward. 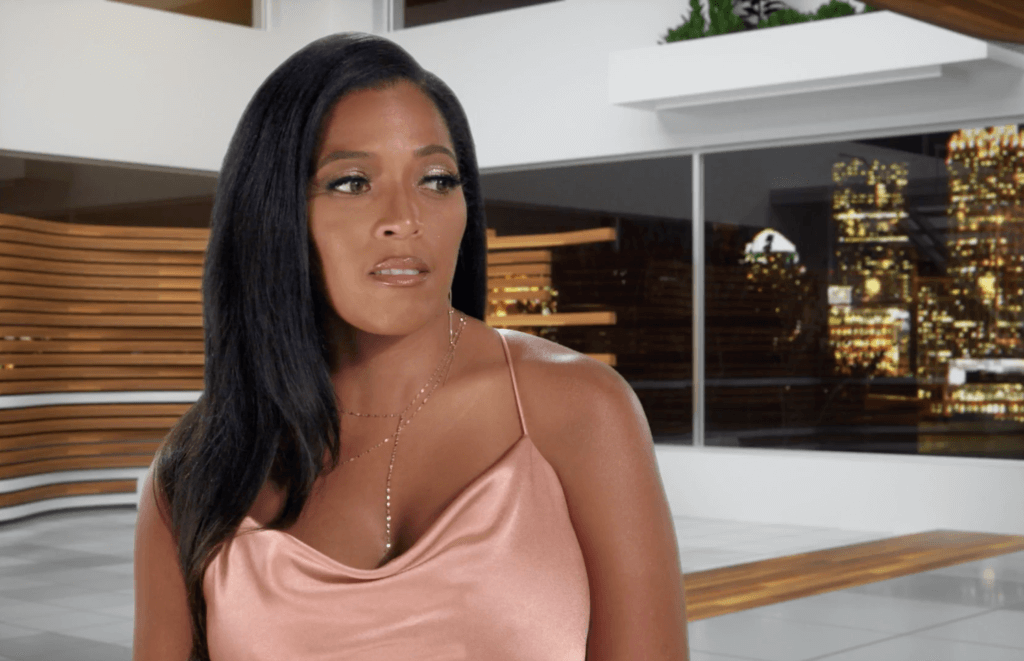 Dr. Simone asks Contessa what advice she has for moving on in a positive direction, and  Contessa replies that she tries to not be so “self-centered”. Ultimately Contessa explains that sometimes people chose to have a problem with you, and to always be yourself. 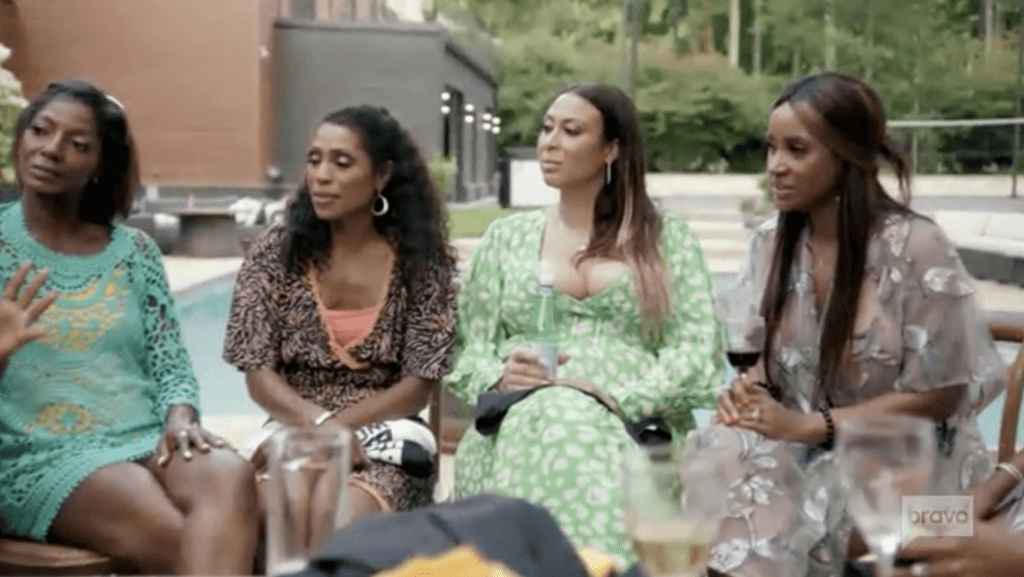 Now I’m not sure if Contessa is talking about her and Toya’s friendship, but I understand perception is reality…sometimes. All while Toya is turning up her face left and right at Contessa’s comments. It all comes down to mutual respect, and all the women seem to agree; but this is the perfect opportunity for Toya to expose Heavenly’s and Contessa’s comment. Cecil sensing the tension, makes it clear that it’s getting a little emotional over where the ladies are. Both Contessa and Heavenly look guilty, but now the situation is turning into “she said, she said” because Contessa is not confessing to ANYTHING! 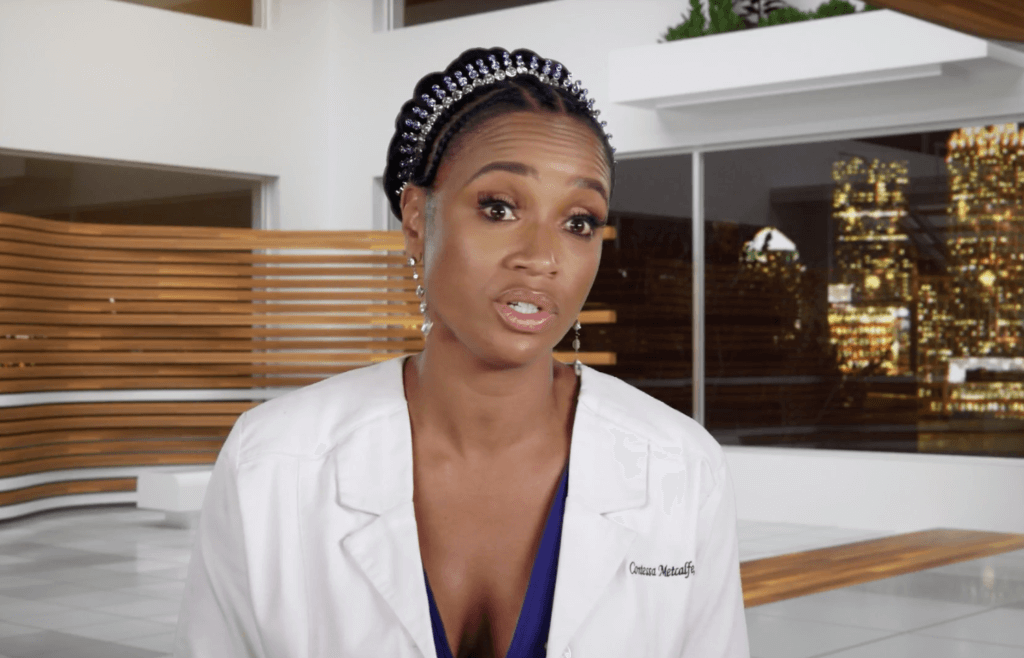 It’s ironic that Contessa prides herself on being so “authentic” but can’t admit to making a shady comment about Toya. Heavenly’s cackling, while Anila attempts to have Toya’s back and Contessa blurts out “THIS B**** COULD BE LYING!” Chaos has officially erupted, and poor mama Harris had to get out of there. Toya tells Contessa to let Kari say it one more time, and Contessa asks, “Who are you talking to” and  Toya replies, “the person I’m looking at.” 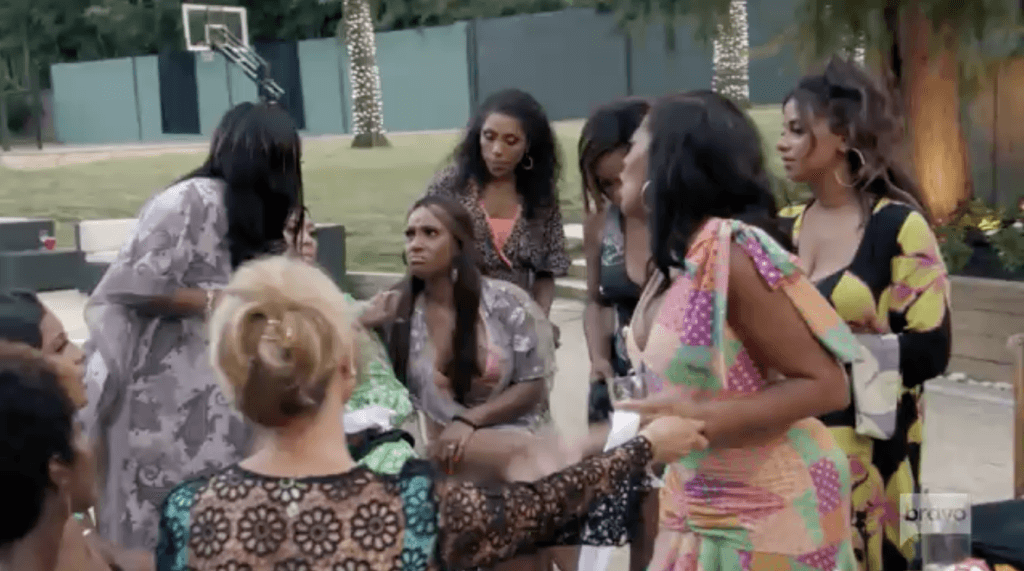 Welp, so much for having a good night with the crew. Contessa attempts to storm away and basically says that Toya doesn’t have any respect for her as the guest begin to see their way out. With dinner officially ruined, Dr. Jackie begins to feel the embarrassment. The husbands sit back and watch the drama unfold, and Tipsy Toya begins brining the mess over to Dr. Damon Kimes. 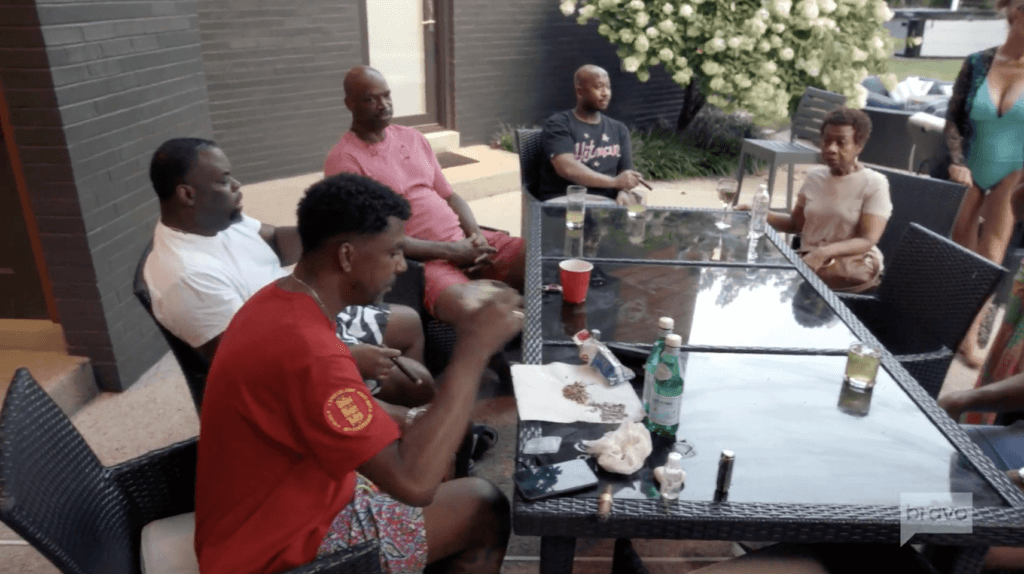 Damon being calm and collected, is not allowing the madness to enter his atmosphere. He has the event coming up soon, and he rightfully wants it to be perfect. I think the ladies just needed to eat, because it seems when the food comes out; they’re finally able to settle down. The big event has finally come! Everyone is excited and ready to make history in D.C.! The crew is feeling good on the bus, and Heavenly even manages to throw in how Damon likes sex in the morning.

Pulling up to the March on Washington, we saw the beautiful people and the awesome opportunity these doctors have in order make a difference. The line was endless, but the doctors have a strategic way, to see as many people as possible. Lisa Nicole Cloud, Kari, Cecil, and Toya arrive at the march with masks and water in hand. 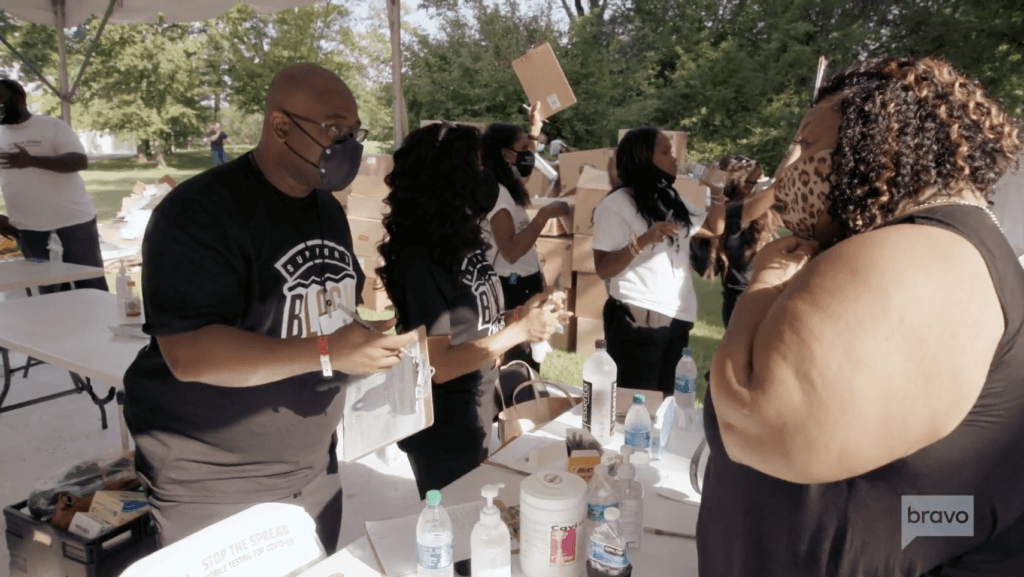 As the event was in full swing, Heavenly got emotional and told Toya how grateful she is to have her there. Toya being cautious, accepts her kind gesture; but is aware that Heavenly will not be this sweet in an hour. Dr. Eugene is educating the participants on how important it is to know your status, while Toya appreciates the current fight and perseverance of Black people. 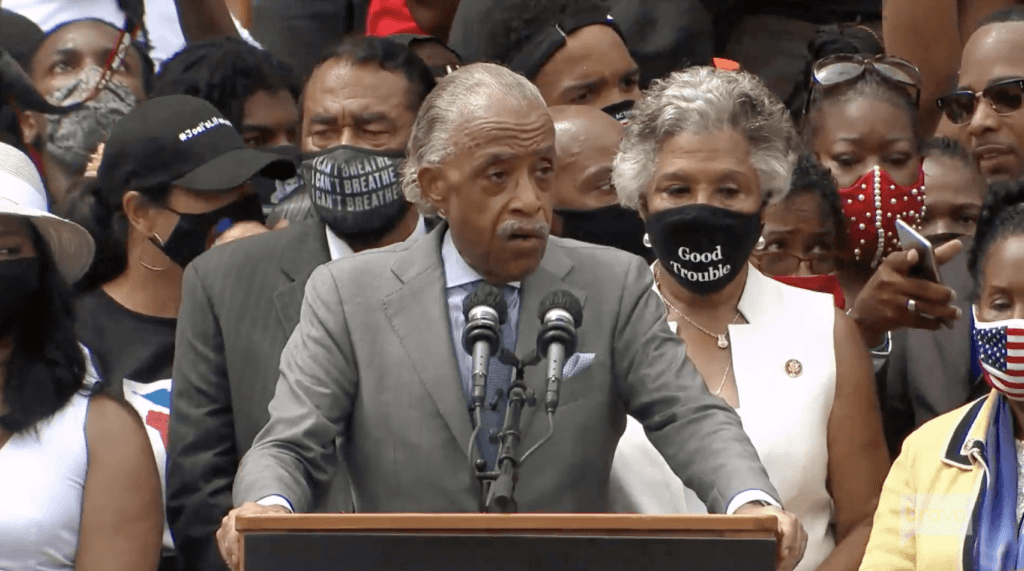 The speeches were filled with power, diversity, humanity, and overall change within our community. Although these ladies go through their share of drama, I love seeing them come together for the greater good! The event was a success, and it seems everyone genuinely enjoyed themselves. Now back at the house, the couples unpack and reminisce about the day. After a shower and some quiet time, the husbands decide to kick the wives out; so, the men can enjoy the house.

The ladies being dressed up head down to the bus, where they end up leaving Kari and Lisa Nicole. The men being surprised at the extra estrogen in the room, told the ladies how wrong it was for them to be left, while politely kicking them out. Kari and Lisa Nicole get the message and make their exit. Back on the bus, Anila makes a comment that her make up artist wants to be paid right away. When Toya asks if she’s paid them, Anila responds “I will, but give me a break”. Toya referred the MUA to Anila as a favor, and Anila is making her look bad. Toya even said, “You should be ashamed of yourself”, and Anila just shrugs her shoulders. Is Anila another Jen Shah in the making? Seems like someone doesn’t like paying her employees… Anyway, the ladies arrive at the restaurant where Lisa Nicole and Kari aren’t far behind. Kari makes a comment about talking to Daddy before they left, and Heavenly interjects “It’s Dr. Damon to you”. Kari taking the “high” road replies, “Ok, then I talked to Dr. Damon Daddy”, and the women erupt in laughter. Everyone but Heavenly that is. This trip is just heating up, and the tea is only getting hotter from here!