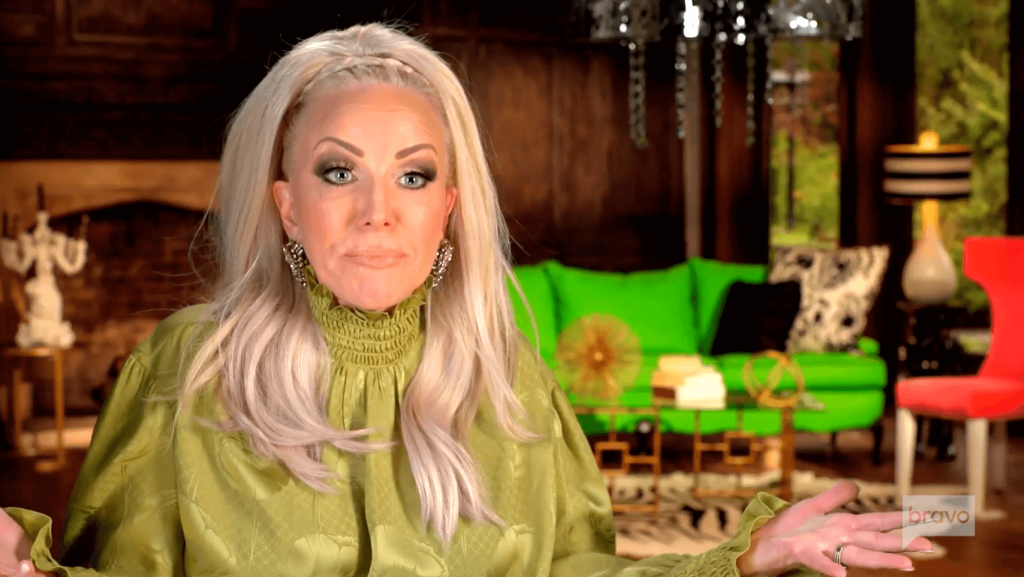 The Real Housewives of New Jersey start off the week on a yacht trip to celebrate Margaret Josephs memoir. But before the trip, the obligatory “getting ready” pre-game scenes happen — choosing outfits and shoes and trying to figure out what’s going to go sideways that day.

Dolores Catania is in her closet picking out clothes with Frank Catania, Jr. Dolores tells Frank Jr. that she didn’t go for a mammogram for 5 years and she needs to have a biopsy on “a little something.” She tries to teach Frank Jr. in the moment to not ignore his health. But Frank Jr. gives her the same stare that her ex-husband, Frank Catania, Sr., gives her before he is about to tell her that she’s wrong about something. Frank Jr. is upset that he’s just now hearing about this. But just like his father, Frank Jr. asks to be updated and tells her he loves her.

Teresa Giudice tells Gia Giudice that she’s going on a yacht for a party for Margaret’s book deal. Emily Liebert, Teresa’s ghostwriter is Marge’s ghostwriter. Gia gets a voice text from her dad, “Bye, Gia, love you.” Teresa takes the sweet moment about Gia and her dad to ask Gia if she has a picture of her dad’s girlfriend. 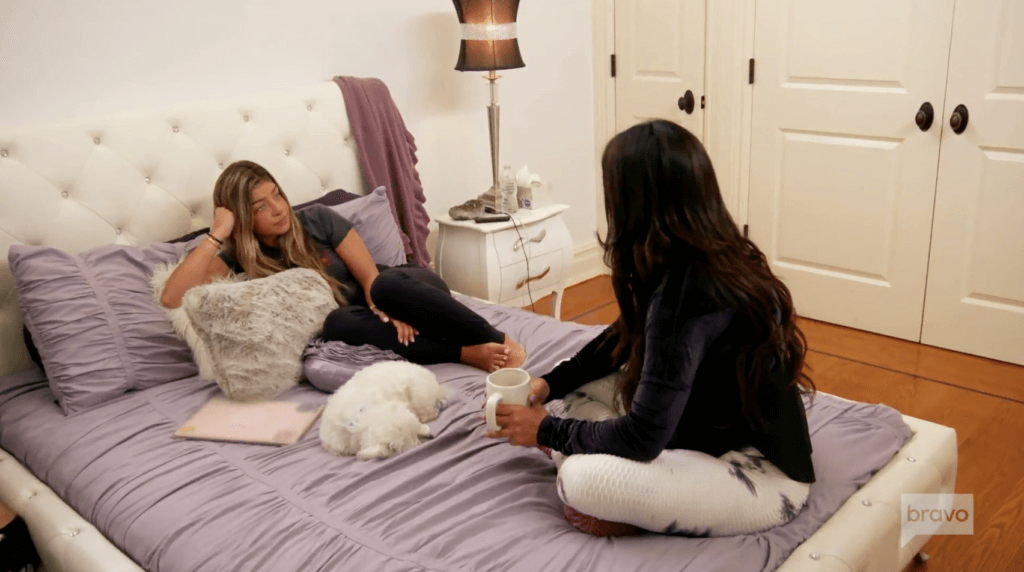 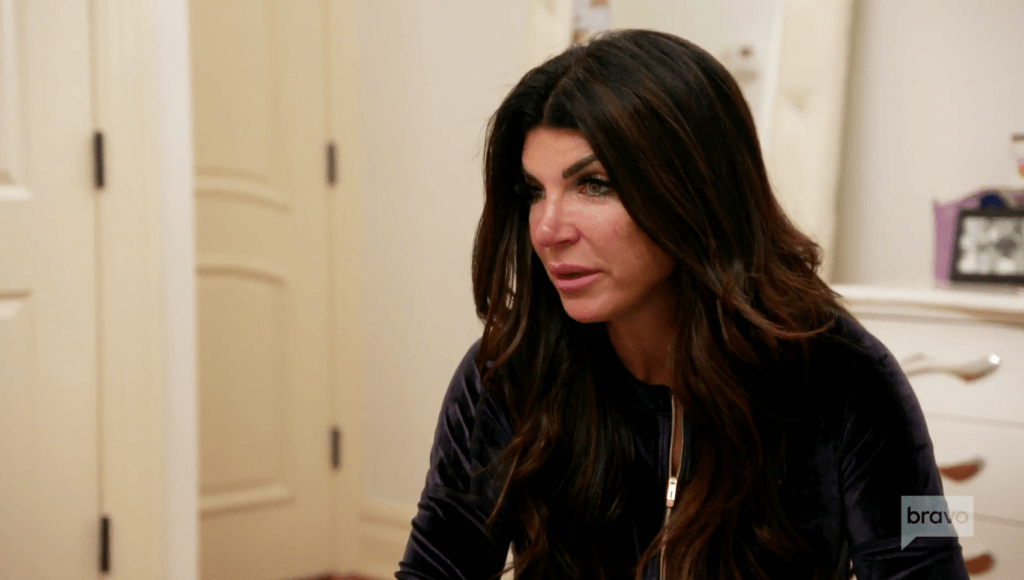 Jennifer Aydin checks in on her kids’ schooling. Funny how everyone is on “a break” from their online classes. Jennifer tries to talk to Gabriella Aydin about the fight Gabriella witnessed between her grandparents in the last episode. Jennifer admits that when she was a child she used to go to her bedroom and close the door and hope that the screaming would stop. They talk about Jennifer’s mom Josephine’s arranged marriage and difficult move to America. Jennifer explains to Gabriella that Josephine didn’t get to choose her life, and they need to just understand where Josephine is coming from. Gabriella seems to have a better context for why there is so much anger.

The Marge and Lexi Barbuto, Marge’s Creative Director, arrive at the Yacht. Jackie Goldschneider arrives and immediately tells Captain Fred and First Mate Parker that a single lady named Teresa is coming on board. Let the sexual harassment begin. Jackie says, “I want Teresa to be happy. If Teresa is happy, then maybe she will stop doing bad things.” Teresa arrives and immediately she’s flirting with First Mate Parker. Melissa Gorga is sick that day, but Dolores and Jennifer arrive. Let’s hope First Mate Parker is a strong swimmer if Tequila Jen falls overboard.

Teresa finally admits to the group that she has a boyfriend. She tells how she met him and they are taking it “very very very very slow.” Marge tells Teresa that she asked Melissa about it, and “she lied perfectly for you.”

Marge gives background on her book and reads an excerpt. It seems like Marge specifically chose this passage about sleeping with her former boss in order to start something up again with Jennifer. Marge was vulnerable about how she didn’t feel she had a choice. Jennifer says that what was written was a very different tone than how Margaret explained it in Lake George. 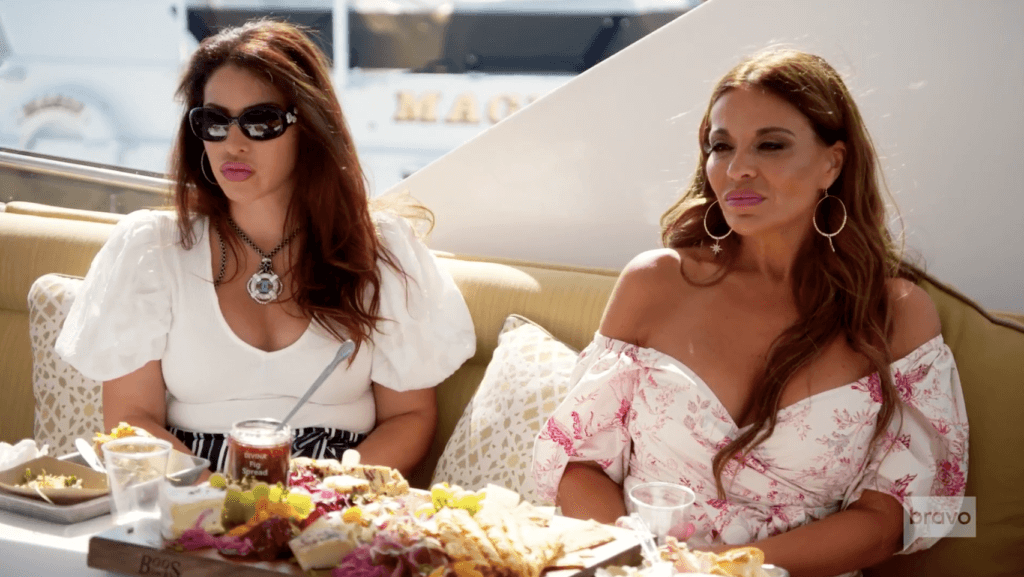 Marge goes in on Jennifer again and says Jennifer is processing things wrong and has tone-deaf Instagram posts during Covid-19. Has anyone noted that they are all sitting on a yacht, wearing fancy clothes, spending hours picking out their shoes, and filming a TV show also during Covid-19? Jen says, “I don’t have to beat to anyone’s drum but my own.” Then Jen says, “If you don’t like the music, change the channel, bitch.” Jennifer does apologize for misunderstanding how impacted and hurt Margaret was. 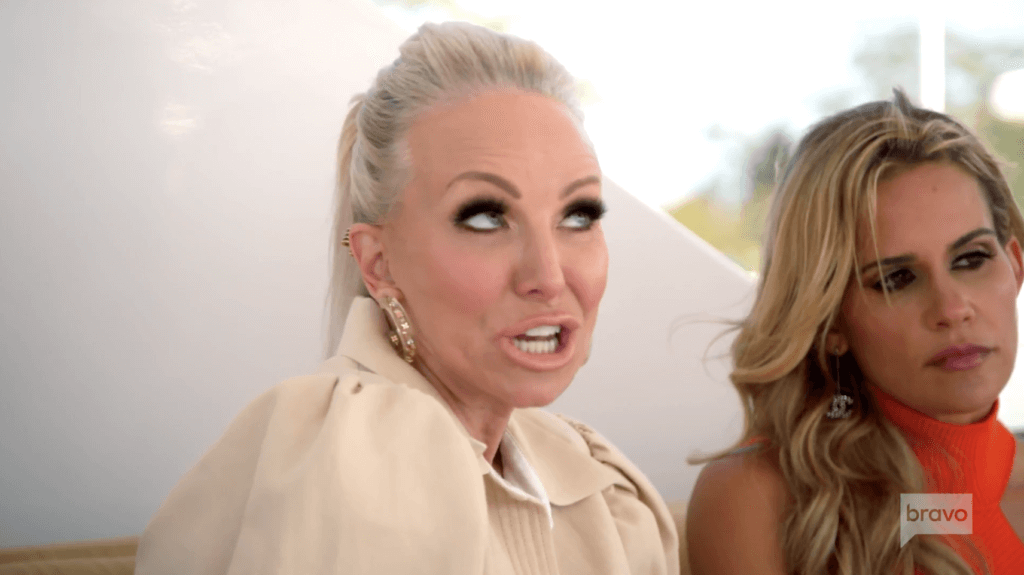 Jennifer goes on to tell the group that she feels like she’s struggling and she’s one comment away from breaking up her family. Jackie asks why. Jennifer explains the dynamic between her parents. And Dolores gets right to the root by saying Jennifer’s mom sees it as disloyal when Jennifer is nice to her father. Jennifer thinks it would lift her mom’s spirits to invite over the girls and their moms for a Turkish tea party. Margaret agrees to move forward with Jennifer. Margaret says, “Life is short. We have no time for grudges.” Let the yacht ride begin. 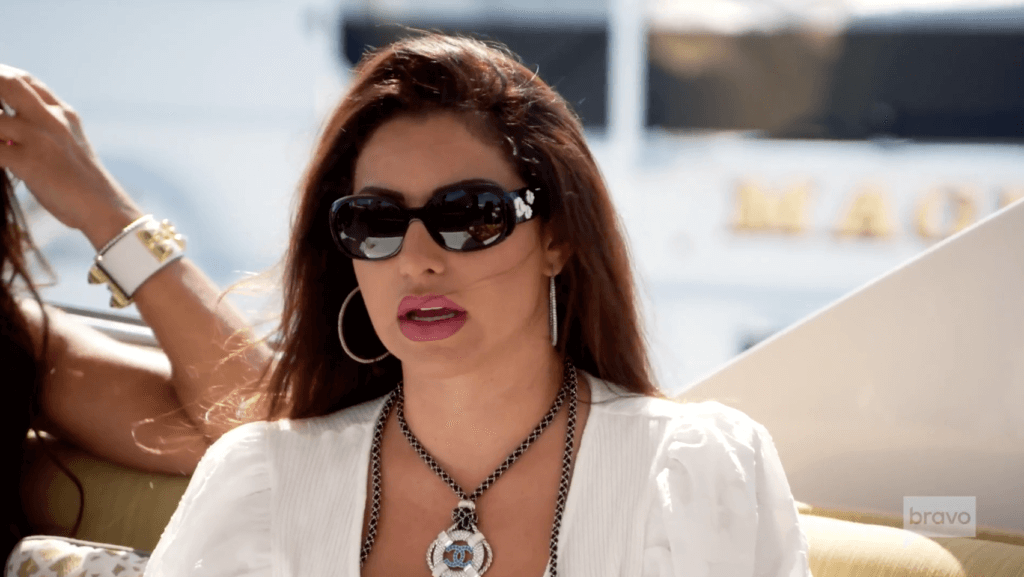 Jackie arrives at Melissa’s house to debrief about the yacht trip. The conversation turns to Melissa and Joe Gorga’s date night. And then it quickly turns to Teresa’s new man. Melissa is excited that a new man is going to result in a “better Teresa.” 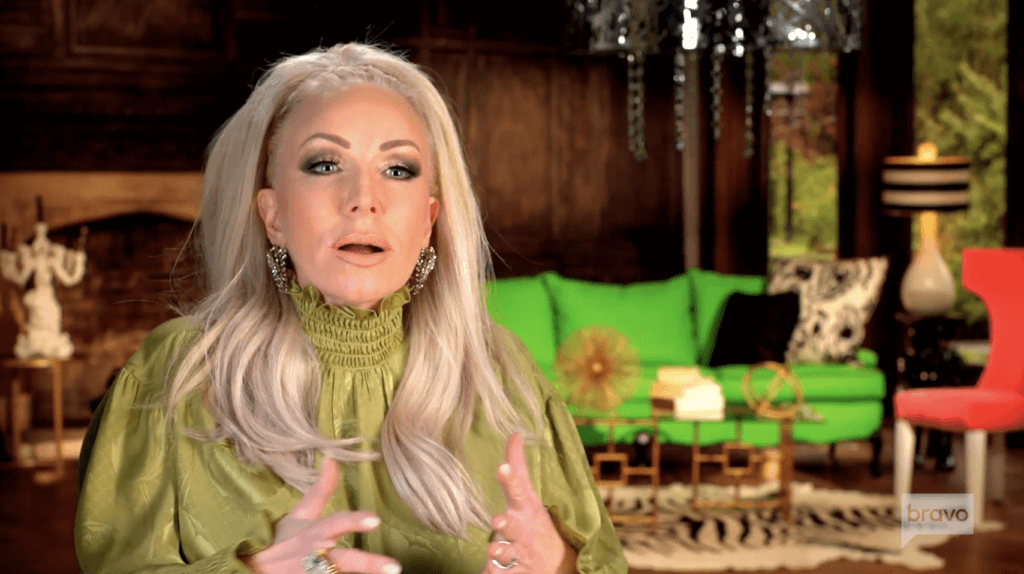 Margaret says that they have a closer relationship now, but growing up, because they were so close in age, “You were counting on me more than I was counting on you.” Marge Sr. does feel bad that Margaret never felt safe as a child. Margaret does try to make her mom feel better for not being like the rest of the mothers. Marge tells Marge Sr. all the good things she got from her including her work ethic. Marge Sr. does take a minute to tell Margaret that she’s proud of her.

Melissa takes her daughter, Antonia Gorga, to Envy to try on clothes. They bond over shopping. But Melissa is about to make this awkward by embarrassing her daughter on national television. 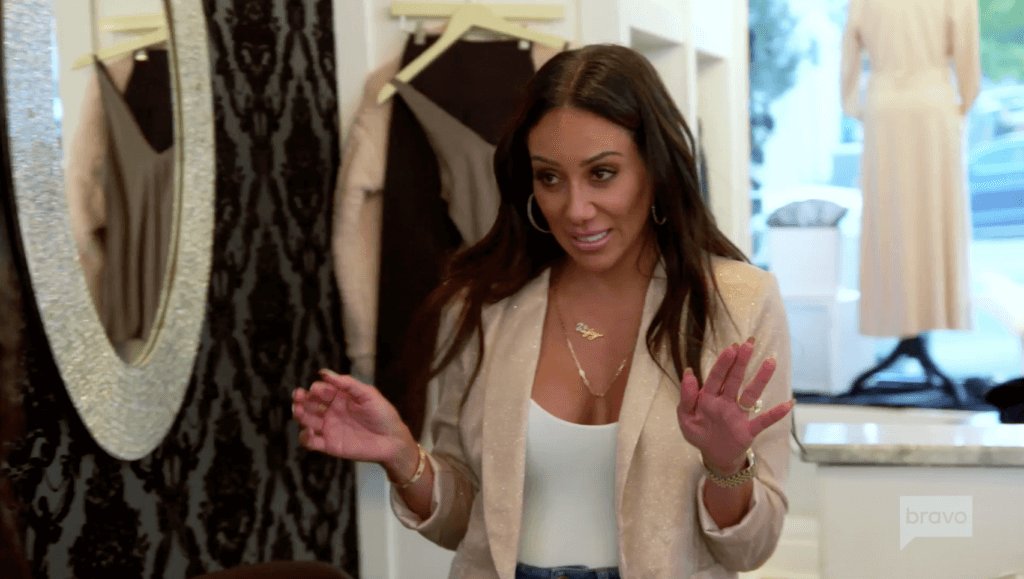 Melissa brings up Antonia’s boyfriend and sex, and Antonia’s not having this conversation. She’s looking for a place to hide as Melissa talks about Antonia’s big boobs. This was bad. 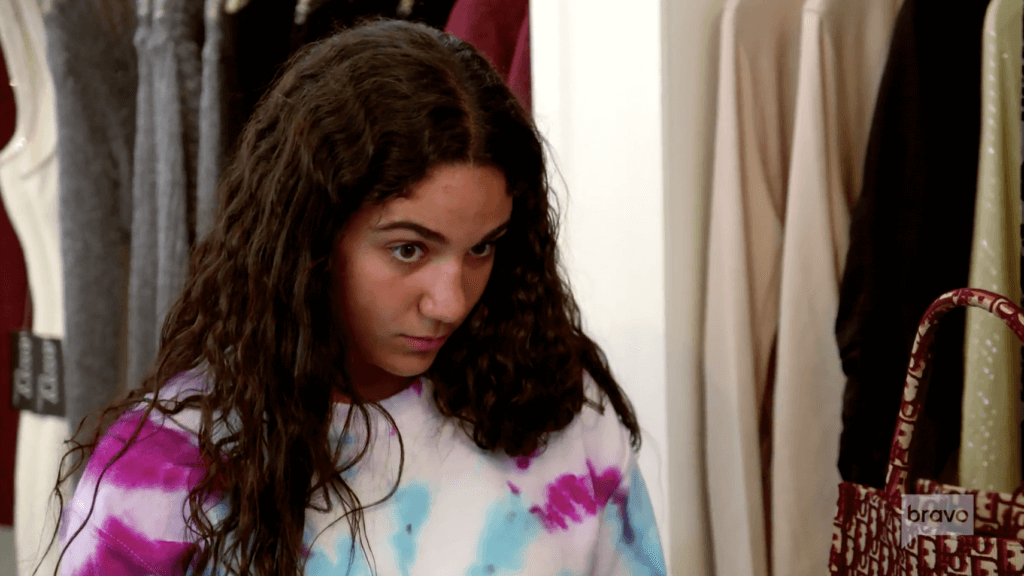 Jennifer and her mom, Josephine, are cooking together to get ready for the Turkish tea party. Jennifer is treating her mom to a special time with hair and makeup. When Teresa arrives, Jennifer realizes that she didn’t bring out any alcohol for the group. When Jennifer says that she didn’t think about it because she’s not a big drinker, Theresa says, “You’re not a big drinker?” Flash to a montage of Tequila Jen…

The rest of the women arrive with their moms — Melissa and her mom Donna; Jackie and her mom, Ann; and Dolores and her mom, Valerie. Jennifer’s house is so big that no one hears Margaret arrive with Marge Sr. Melissa brings up to the women her talk with Antonia. The conversation quickly disintegrates to blow jobs. The rest of the women talk about how their moms reacted to “the sex talk” or didn’t have “the sex talk.” Teresa is reflecting on the fact that her mom isn’t there. Teresa is struggling without her mom and tells the group she’s leaving. Melissa’s mom gives Teresa a huge hug. The tea party continues next week.