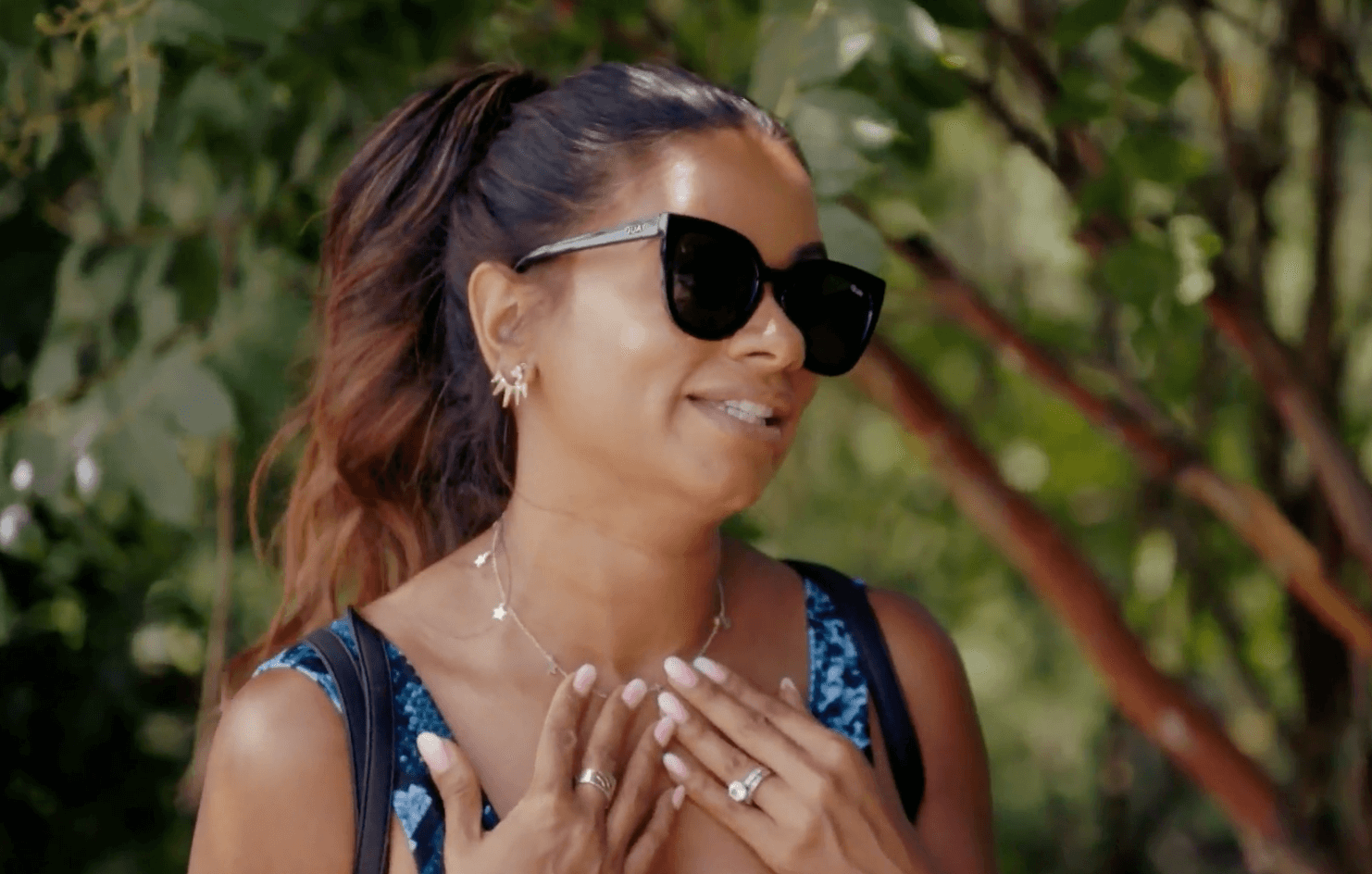 Welcome back to the wonderful world of Marriage, Medicine and Mess! This week’s episode of Married To Medicine starts with Dr. Jackie Walters in the office (as always), Toya Bush-Harris talking with her son; and Dr. Contessa Metcalf asking if her at home babysitters are tired of them yet.

Dr. Simone Whitmore is teaching her son, Michael, how to drive while prepping him for his new college adventure. The pair shop at the store for college supplies, when Simone brings up the idea of a “Family Basketball Game”, the kids vs. the adults. Dr. Heavenly Kimes agreed to allow Simone to conduct the game at her house; and Michael brings up wanting Jackie to come. Simone is initially hesitant but seems to agree with Michael. It’s clear that Simone misses Jackie, but will her son be the peace maker to bring the two back together?

Next, we head over to Anila Sajja as she checks out the progress on her new house. Anila and her husband Dr. Kiran Sajja is showing her parents the construction, but it seems like Anila’s mother isn’t happy with anything regarding the new house. She complains that the guestroom isn’t big enough and there’s no balcony for her to enjoy. Seems like her mother is pretty picky and it makes me wonder how long Dr. Kiran will put up with this foolishness. I know the saying is “Happy wife, Happy Life”; but no one said anything about a happy mother-in-law. Anila expresses in her confessional that it’s hurtful that her mother isn’t satisfied with anything; but I think Anila is so used to pleasing her mother, that she doesn’t know how to speak up for herself. 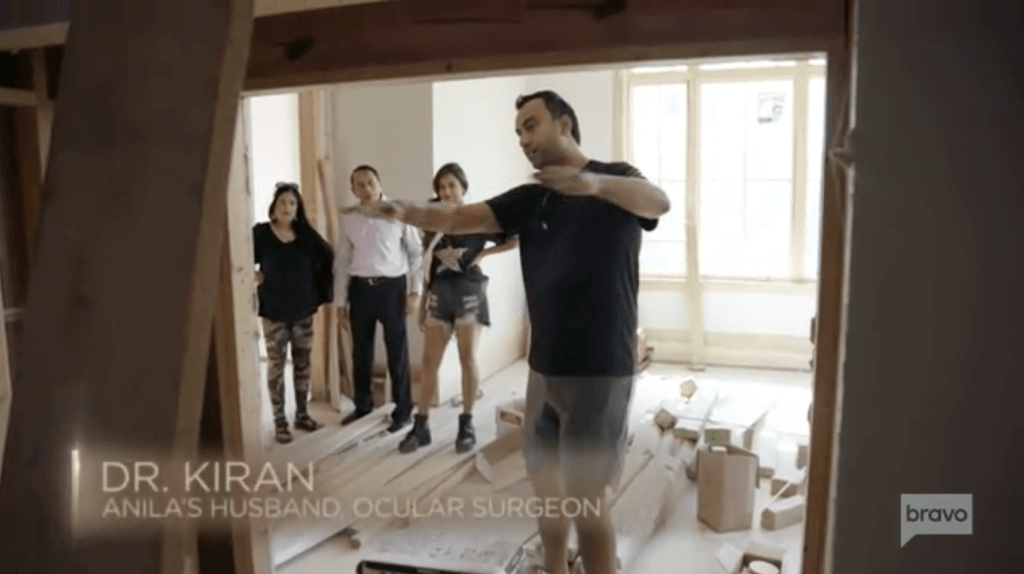 There are some deep issues in Anila’s family that seems to be coming to light. Let’s hope to see more of this dysfunction in episodes to come. 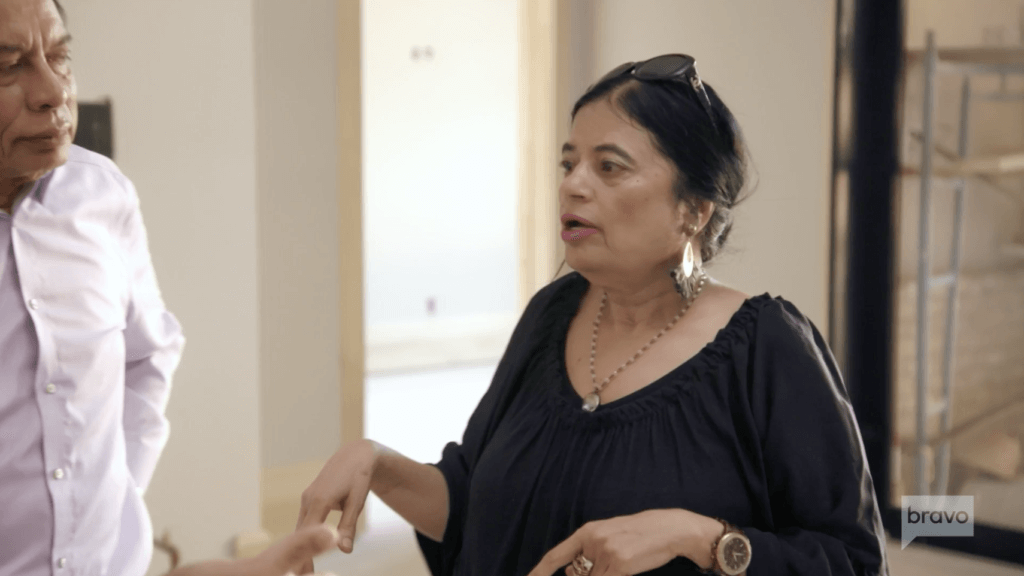 Jackie’s in her office treating a patient, and Toya is creating a sexy ambiance for Dr. Eugene Harris. Toya has the bubble bath ready, champagne, fruit, and candles. We love a good day time romance! Although Eugene is half asleep, it appears that he has something to get off his chest. Eugene brings up Toya’s “snappy attitude”, and that he doesn’t want to be defensive all the time. Toya making light of the situation, Eugene brings his point home by laying down that her delivery to him, needs to improve. Being the fiery Aries that she is, Toya clearly aint paying attention to what Eugene is saying. I think it’s clear in their confessional that his concerns went in one ear and straight out the other! Oh well… We’ll see if this situation improves (or not). 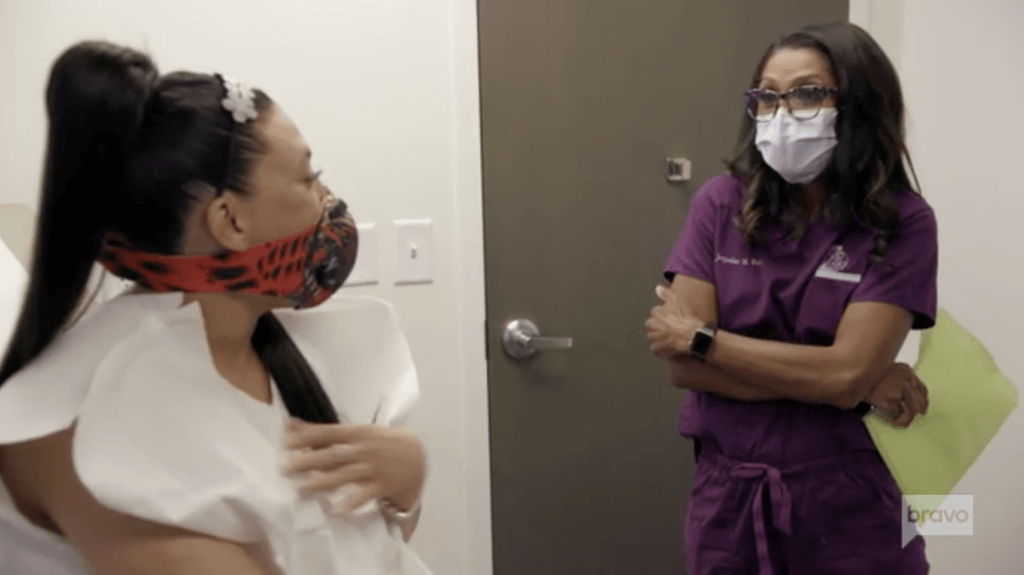 Heavenly is at home responding to social media when her son Zachary comes in. Now this is a real treat because we never see this young man on our screens, and it’s nice to see a fresh face for once!Heavenly tells us about her son’s real estate goals and highlights his recent accomplishments. The conversation gets more intense when Heavenly talks to Zachary about his “Black Lives Matter” shirt. Apparently at Damon’s party, Heavenly and Anila got into a little disagreement about Black and Brown folks. I’m upset that conversation got edited out, because I think that would’ve been a great conversation starter that we all could benefit from. Either way, Zachary decided to help Heavenly explain the differences to Anila in hopes of coming to some understanding.

Anila is driving and calls Contessa for a quick meet up. Contessa making sure it’s just the two of them, agrees in hopes of resolving this issue between the two. Contessa arrives at Piedmont park first and gets cozy with some cute puppies. Anila arrives and they skip the small talk and get right into the meat and potatoes of things. 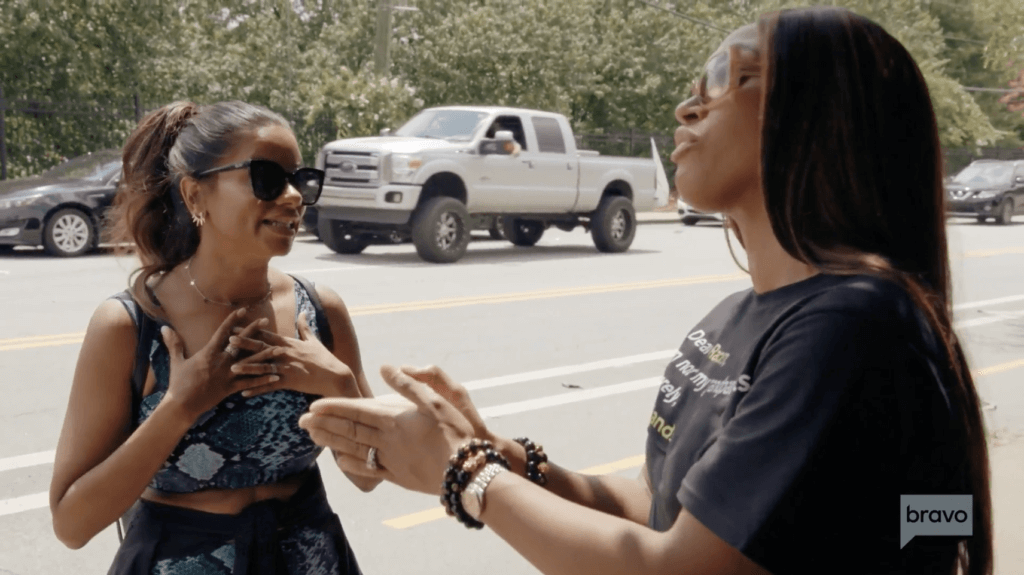 Contessa believes it’s Anila’s fault, because she kept pushing for the two to reconcile; even though Contessa made it clear that she was good. Anila truly being the naïve one of the group, really doesn’t seem to get why the dinner went so left. The conversation seemed to be going somewhere, until Anila says that Contessa “basically” threatened her mom. Contessa taking a literally leap, thinks this claim is a reach. Anila’s mom is the one that grabbed Contessa, but this is clearly a misunderstanding. The two conclude with realizing cultural differences and decide to hug it out. 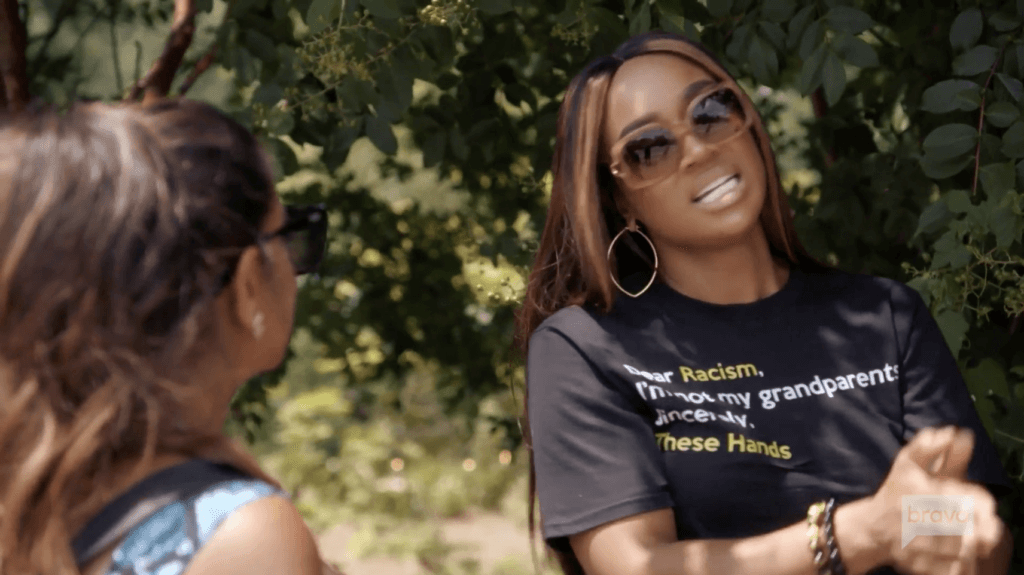 Simone and Cecil are driving to Heavenly’s for the basketball game, while discussing whose all coming. Simone did invite Jackie, but she’s on call this week so Curtis plans to support. The rest of the crew show up with masks in tow, and Michael is caught checking our Heavenly’s daughter Alaura. Curtis shows up and briefly reminiscences about watching Michael grow up. Toya arrives with a new friend and Heavenly calls her a stray b**** per usual. It really seems like Heavenly is insecure with any new woman around Daddy, that she  doesn’t know. Toya clowns Heavenly in her confessional because there’s no forks and things aren’t as fabulous as she would like, while chatting it up with Anila. Toya asks how the conversation went with her bestie, as Anila changes details about what happened. Anila told Toya that she felt she was “disrespectful” to her mom, and I didn’t hear any sincere apology from Contessa. Hmmm… seems like Anila is doing a little bit of lying here. Let’s see how this plays out *rolls eyes*.

The basketball game rules are laid out, while Simone rags on Michael about being a crybaby. The score is tied for most of the game, but its clear the kids have way more stamina than their parents. Heavenly being a sore loser, decides to change the score so it looks like they won. The kids just let them think they won, and Simone told Michael how proud of him she is. Everyone disperses while Dr. Kiran takes his kids to get something to eat. All is well until Heavenly decides to open her big mouth. “That’s yo job, you supposed to go get the kids”…. Welp, so much for a drama-free evening. Anila looks stunned while the rest of the ladies look on confused. Anila tries to let Heavenly know that the work with the kids is 50/50, and Heavenly asks if blogging is a real job. Goodness, it’s almost like Heavenly likes putting others down. Who would have thought smh? Toya speaks up for Anila and tells Heavenly to stop hating. Of course, Heavenly doesn’t think she’s done anything wrong, and is triggered when Toya says, “ I don’t have a reason to hate, cause people like you, wanna do what I do”. Heavenly’s horns officially come out, and she gets crunk.

Toya does have a point, because Heavenly did replicate Toya’s two-story closet and added the outside fireplace to her house; same as Toya did. So, its not far fetched to think Heavenly is TRYING to be more fabulous now days. They yell back and forth when Heavenly offers to bring Ms. Quad Webb-Lunceford  in to verify how Toya got the down payment for her house. Confused, Toya asks what Quad has to do with anything; and Heavenly tells everyone how Toya allegedly got the funds for her house. A flashback from last week reminds us how Ms. Quad told Heavenly that Toya took out a hundred-thousand-dollar loan. Toya wondering why they’re worried about her finances, throws in Heavenly’s face how much her current outfit cost; and how Quad’s receipts are faulty. Contessa’s missing the action being in the house talking with Dr. Damon, and Anila brings up Heavenly’s comments about her blogging.

Not wanting to miss a beat, Heavenly brings up Anila’s comments on Black Lives Matter and aims to settle the score once and for all. Anila stands up and disengages, while Toya tells Heavenly to “Pick on someone your own size”. Anila attempting to explain to Heavenly about her experiences with racism, doesn’t seem to get her point across as Toya continues talking sh** to Heavenly. The men laugh at the women’s drama as usual, while everyone packs up and leave.  Seems like nothing got resolved and more mess is to come. Hold on to your wigs ladies, because we got more mess to look forward to next week!