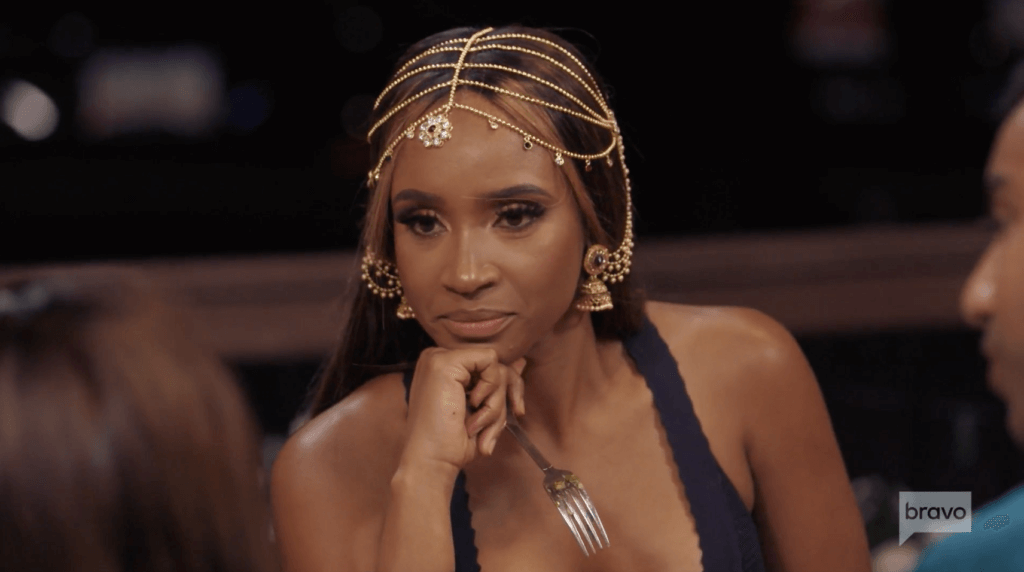 Another Sunday, another night of Married to Medicine! We begin by Dr. Contessa Metcalf playing with her kids outside on the playground, while Toya Bush-Harris and Eugene Harris catch up in the kitchen. Dr. Simone Whitmore, Dr. Jackie Walters , Dr. Eugene, and Dr. Contessa let us into their lives as they fight the coronavirus, during their everyday routines. The stress of caring for patients, while also being conscious of your own chances of contracting the virus; has added an in-depth look at their daily lives. Of course, we love the glamour and the parties, but at the end of the day; these are the professionals of the world. 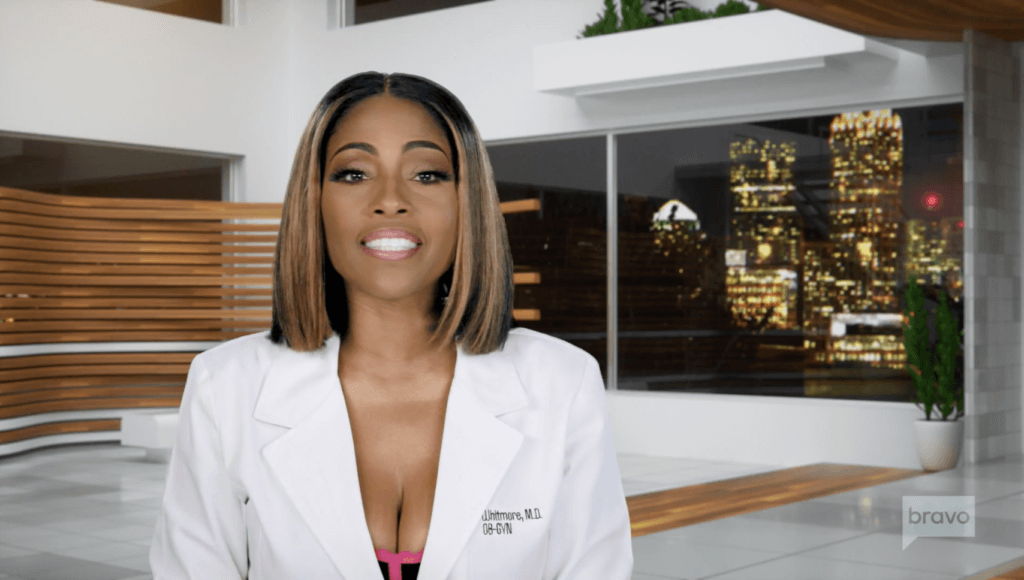 Dr. Heavenly Kimes is seeing a patient at her office, who have experienced police brutality. While the patient Miracle was at the Indigenous Protest, she shows the viewers how a police officer came up and assaulted her. Damaging her teeth, Miracle demonstrates just how much work still needs to be done, in the name of justice. It’s important for citizens to share their stories, and it’s nice to see Dr. Heavenly use her powers for good (for once). 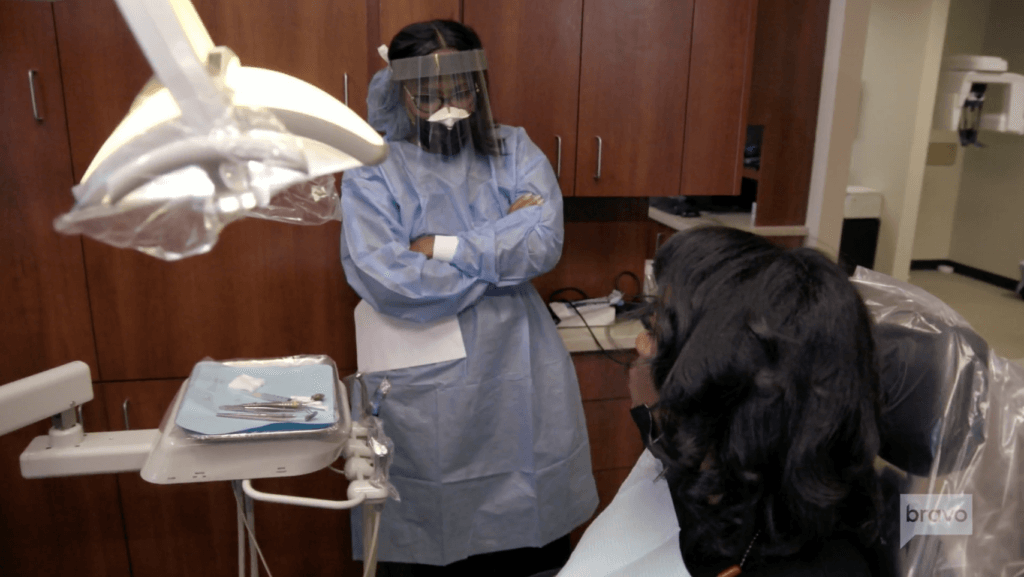 Anila Sajja pulls up to Toya’s house in a beautiful car, and the two jet off in Toya’s golf cart. The pair go by Anila’s new house to see the progress and arrive at the tennis court to participate in an instructor led class. Toya tells us in her confessionals that she plays two-sometimes three times a week. Anila verifies how good Toya is, and the two finish and head home.

Dr. Jackie meets Dr. Contessa at the new building, that will soon become Contessa and Dr. Scott Metcalf’s joint private practice. Giving a tour of the place, Dr. Jackie questions Contessa on the specifics of treatments being offered. The two go outside to drink their smoothies, and Contessa asks Jackie for advice. Speeding past the small talk, Jackie asks the most important question, about the status of Scott and Contessa’s marriage. Contessa tells Jackie how Scott quit counseling and that she doesn’t go to her therapist anymore. It’s apparent that Contessa just wants things to work out, but seriously sis; you’re doing too much to even focus on what’s going on in your marriage. Contessa is intentionally distracting herself, from handing things with Scott.  But I digress. 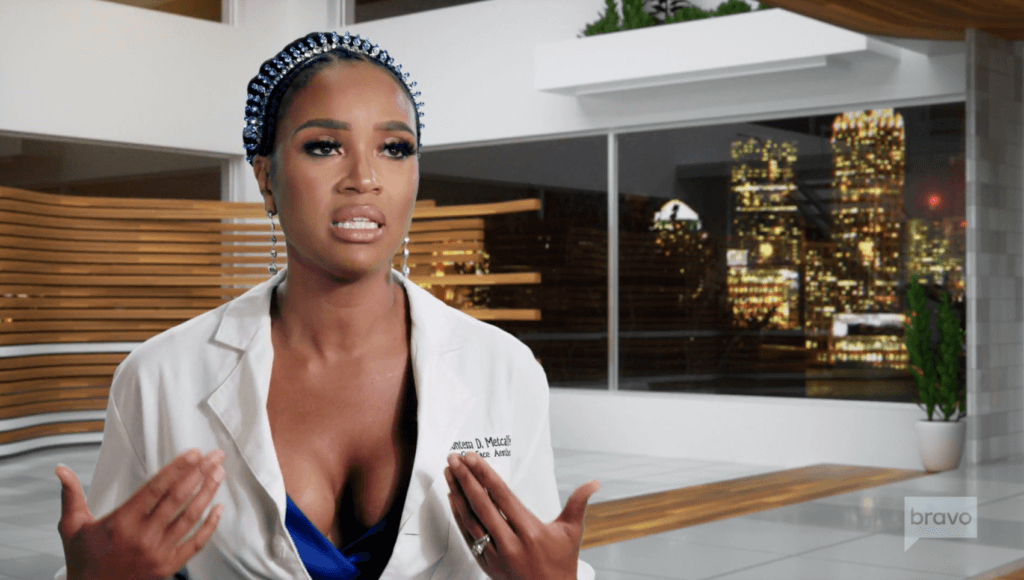 Anila is home with her sister, making the bed and looking gorgeous. A ring at the doorbell and the kids squeals and head to the door. It’s Anila’s parents! Honestly, this is exciting. We love seeing different cultures! Providing a rundown of her family’s history, we’re introduced to arranged marriages; and how her parents got married. What show would be complete without some in-law conflict? That’s exactly what we got when Anila’s husband, Dr. Karin Sajja arrived home.

While his mother-in-law complains about damn near everything, Karin attempts to ignore her and move on with the night. Back at the Harris household, the kids are stalling from doing schoolwork, while Toya tries to keep her frustrations in check. A flashback shows the struggle of doing NTI at home and the many other things women have to do around the house. I’m sure viewers loved how Toya captured these moments, and many women can relate to the unbelievable work these kids do now days. Eugene is conscious that everything seems to be getting on Toya’s nerves, and admits that there use to be outlets to help; but they must handle it and move on.

Anila is getting dressed and greets her sister and mother in the kitchen. It’s Rakhi and Anila’s family is celebrating with a dinner. Toya video calls Anila and for some reason, Anila inserts herself into Contessa and Toya’s drama. Anila explains she thinks the two should “Talk it out”. But we know this is a TERRIBLE idea. Well, Anila had to add something to the group; so lets see how this plays out. Surprisingly, we see Quad Webb-Lunceford! Quad visits Heavenly’s house, and the two get some wine, while relaxing in Heavenly’s three-story closet. Asking for the 411 of the group, Quad asks how Toya and everyone else been doing, and Heavenly’s horns start to grow. Heavenly shows Quad a video of Toya on live, with Cecil Whitmore and Simone. Apparently, Toya isn’t as cool with Quad, as she thought. Once she realized the friendship was now in void, Quad unleashed her inner b****; and divulged how Toya took out a PERSONAL LOAN for her house. It’s still unclear why Quad was demoted to a friend of the show, but it looks like Quad may be moving right back to center stage.

It’s the night of Anila’s dinner party! Everyone looks gorgeous in their Indian attire, and Toya’s energy shifts when she sees Contessa. Shading Contessa’s headpiece of choice, Toya is doubtful of a successful dinner. Anila has good intentions, but she doesn’t know what she’s doing. She doesn’t know their relationship, and part of me wishes she would’ve watched last season; as a head up or something! Everyone appears cordial as the rest of the guest arrive, and food starts rolling out. Enjoying a unique shot, Contessa asks about Anila’s kids who are also at the dinner. Unable to read the room, Anila ask to pull Contessa to the side so they “can talk.”  Contessa thinking everything was good, Anila clarifies that the issue was discussed at the holiday party. Contessa lets it be known that she’s there to get to know Anila, and that she has no interest in the propaganda of being Toya’s friend. The incident is Toya invited Contessa over for Christmas, and Contessa allegedly didn’t want to take her shoes off at the door. Simone thinks Toya wants Contessa to respect her, and that the issue isn’t the shoes. 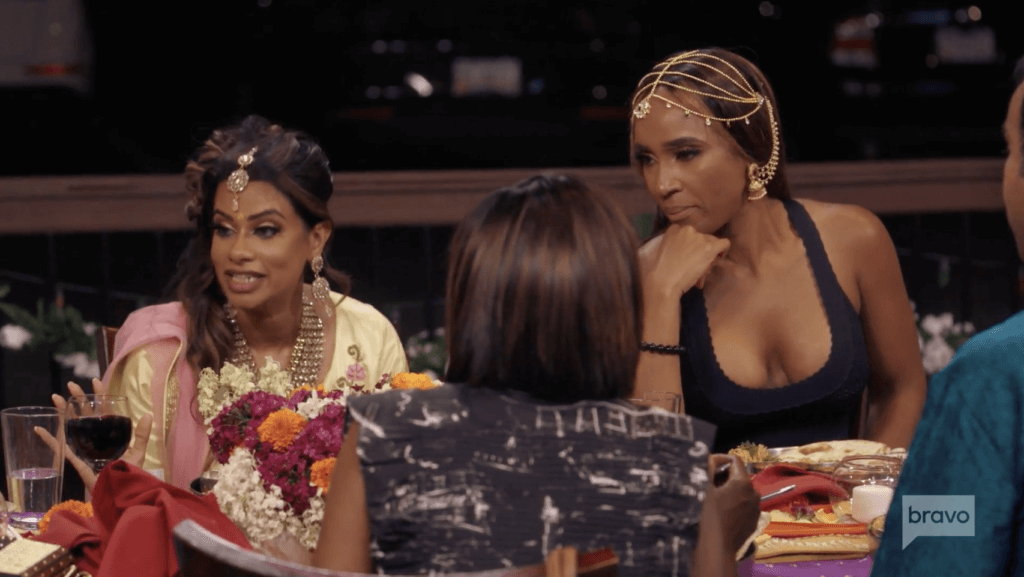 Contessa rejoins the dinner table and begins inquiring about Anila’s childhood. Everyone is enjoying themselves, and we see the traditional aspect of the Rakhi celebration. Being the smart woman that she is, Anila excuses the kids so the adults can have some real conversations. Toya voicing her confusion around Contessa’s invitation; Anila tells the group that “whatever is going on between you guys, it’s not that deep and yall need to just about it.” Contessa fires back with “You’re trying to make peace with someone, who enjoys war with me.” “I wouldn’t say she enjoys war with you.” Simone says, and Toya chimes in saying “It’s like an up and down rollercoaster ride. Three years of the same sh** with Contessa-“ as Contessa gets defensive. 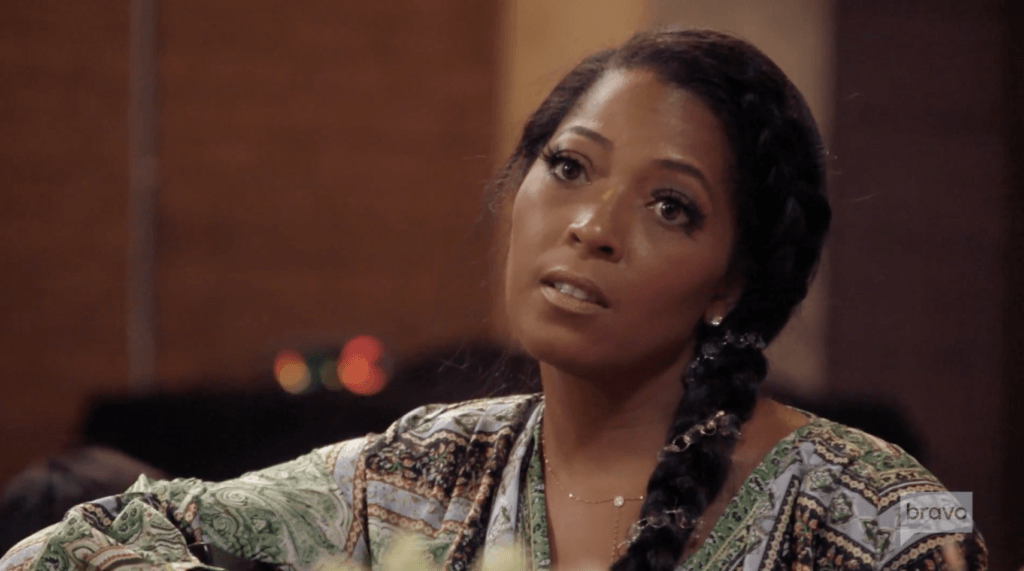 The husbands remaining silent, watch the action unfold and the tension intensifies. Toya and Contessa begin arguing about Covid and the different ways it’s affected their lives, and neither are listening to each other. Clearly over the conversation, Contessa begins to fold up her napkin, apologizing to Anila for the disruption. Anila playing peace maker, tries to get Contessa to stay to no avail. 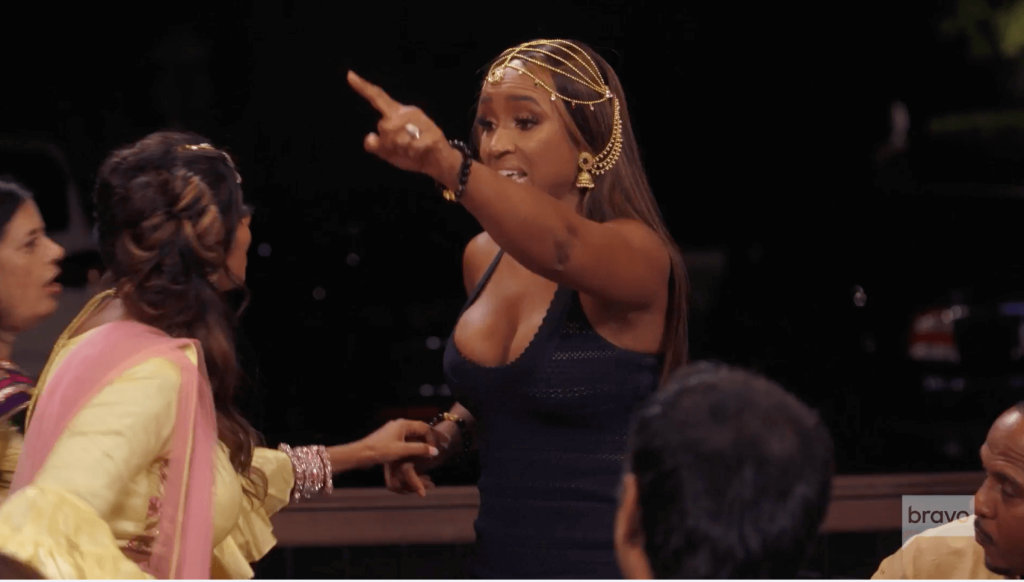 On her way out, Contessa blurts out while pointing at Toya “That b**** is fake, when you get to know her better, you’ll find out.” Contessa tells Anila if she wants a relationship with her, then to call her; but it’s clear she’s not hopping on the let’s be friends with Toya train. Even Anila’s mama tries to get Contessa to stay, but no one is stopping Contessa when she’s in this state. Once Contessa and Scott are somewhat out of view, Anila quickly switches gears and is now upset that Contessa is leaving. Contessa being the hawk that she is, heard the comment and says to Scott that “this relationship with this chick is boring, she needs a hobby and I’m not gonna be it.” Scott and Contessa continue talking about it in the car, as Anila tries to explain where she was coming from. Eugene’s the only one with some common sense, in just being ok with the fact that the two won’t like each other. Wise words, if only they’ll listen. Until next time…