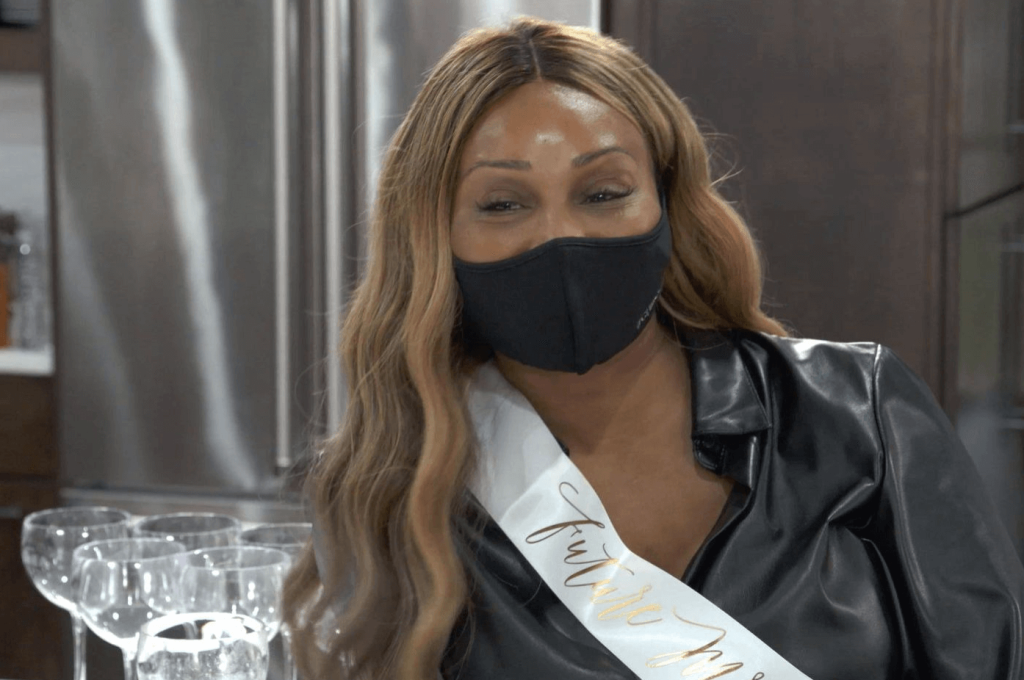 Cynthia Bailey’s big day has come to The Real Housewives of Atlanta. The wedding we’ve all yawned over is finally here. Can you feel the lack of excitement? I can!

We open this episode on the day before the ceremony. Cynthia and Noelle are indulging in a mother/daughter massage. Porsha Williams worries about seeing Dennis at the wedding. Drew Sidora is begging her kids for some sugar, but they’re over Mommy. 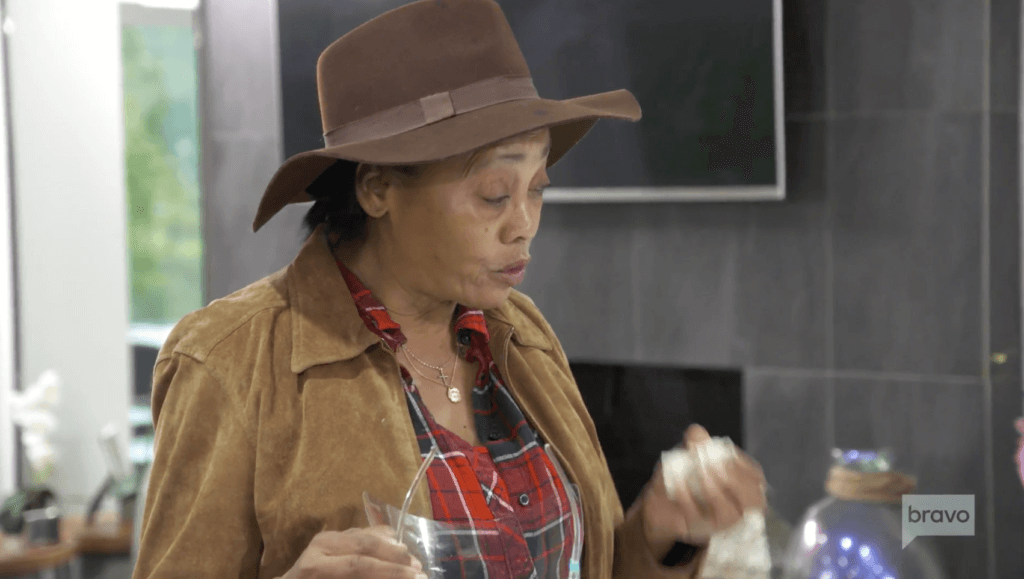 On the night of the rehearsal dinner, the weather has decided to taunt Cynthia by raining. If you’ll remember, there’s a hurricane on the way. But that won’t deter our bride. She has the option of an indoor wedding.

With everyone meeting at Cynthia’s house, she’s stressed out. She’s also getting public flak for having such a big wedding. Hello. Pandemic, anyone? But Cynthia assures us she’s taken every precaution to keep people safe. Still, she’s getting backlash from the likes of Wendy Williams, which adds to her frustration. 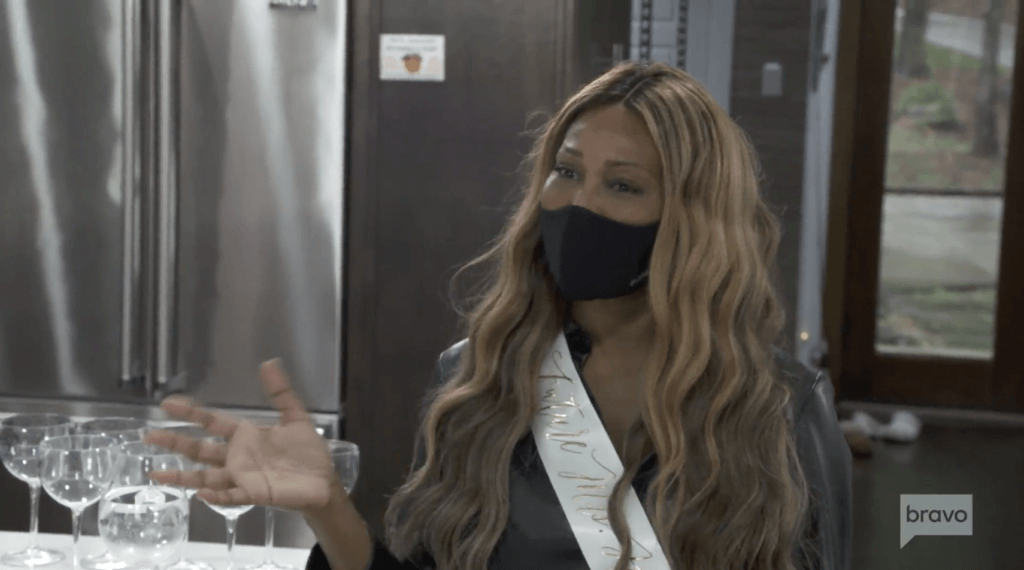 Kenya Moore finally arrives and greets fellow bridesmaid and former castmate, Eva. The sip on wine, and Cynthia says the weather is supposed to be worse on the day of the wedding. Kandi Burruss stops by without a face shield. Fortunately, Cynthia has extra to protect her out of town family. 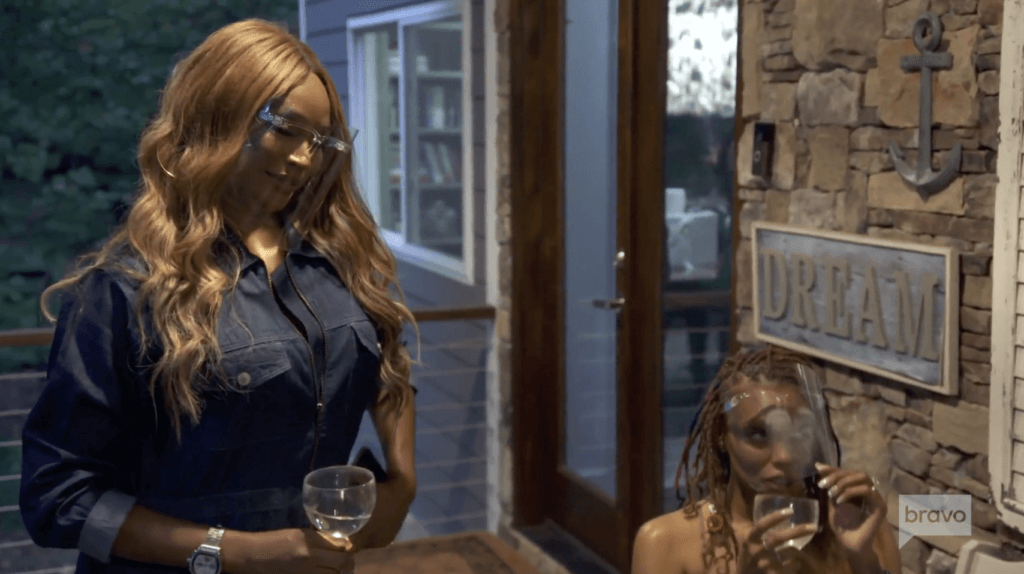 Mal, Cynthia’s sister, steps out onto the porch and complains that she’s been left out of the celebration. Cynthia’s bachelorette party is also receiving quite a bit of attention because of the rumors about Bolo the stripper hooking up with two Housewives. Mal wasn’t invited to the girls’ trip, so she missed out.

Eva wonders how much of what she read in the blogs is real. Kenya spills the tea about Tanya and Porsha making out. Shamea might have gotten in on that action, too. Kandi claims not to have seen anything.

Cynthia is tired of talking about Bolo. This is Cynthia’s day, so put a cork in it, Kenya!

Kandi has a few things to say, too. She intimates that there might have been some downtown action between the ladies. As long as no one believes she was involved, Kandi doesn’t care.

When most of the ladies go back into the house, Kandi and Kenya remain on the front porch. Kenya is grateful that Kandi has backed up her allegations about the bachelorette party. But Kandi insists she doesn’t want to ruin a friend’s (that would be Tanya’s) relationship.

A producer asks Kenya why it’s so important to out the women who had sex with Bolo. She says if the ladies do something sexual with all those eyes on them, it will come out. Which begs the question, why did the women kick production out of the house and turn off the indoor cameras if they didn’t want some semblance of privacy? It seems to me there was an unspoken pact about that night, and Kenya broke the agreement.

Kandi believes Kenya is trying to publicly shame people. She’s not okay with it.

Drew stops by Shamea’s house for a party. The theme: a night in Nice (which Shamea spelled Niece). Shamea declares this a judgement free zone. Mmm hmm. We’ve heard that before.

Porsha arrives in time for champagne. Marlo follows on her heels. The “nieces” are getting together minus the “aunties” to have a good time.

Drew has issues with the gossip surrounding the bachelorette party. Kenya has been online in videos declaring she wasn’t the one who rode Bolo. Marlo also posted a video with #itwasntme in the title. But Marlo is now parenting her two nephews. One came to her and asked what she got up to on her trip. Marlo, trying to be a good role model, put a stop to any rumors about her own behavior by posting the video. 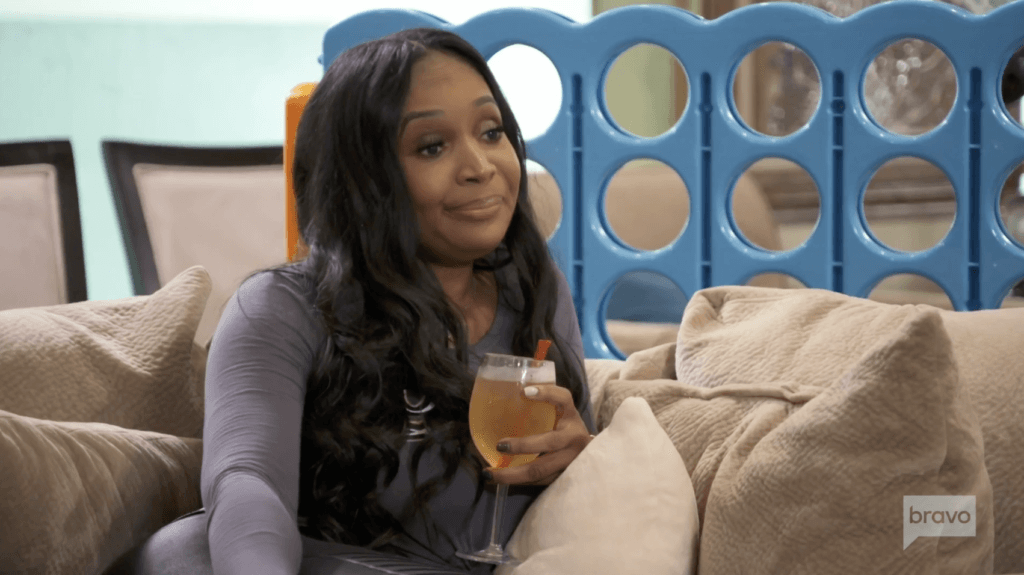 Though Marlo claims she didn’t know about Kenya’s video, Porsha believes they’re in cahoots. She thinks Kenya is getting Marlo to cosign about the night with Bolo.

When LaToya Ali arrives, she doesn’t take the shirt Shamea bought for her into the bathroom to change, as the other women did. No, Toya rips off her button down in front of the group. Tape holds up her boobs like a pair of suspenders, and she slips on the new T-shirt.

The nieces play Jenga Truth or Dare. Toya says she would smash with Drew. Marlo has to rip off her shirt and do five laps around the room. Then Toya makes fun of Porsha’s walk, which is hilarious.

LaToya drops the news that Bolo posted a video claiming to have had sex with Porsha and Tanya. But she’s only joking! What’s not a joke is…. Kenya’s insistence that Tanya and Porsha were in that room with Bolo, begging to be pounded. Porsha tells Toya it’s just not true.

When the women disagree with Toya talking about Bolo yet again, she says it’s time to change the subject. She doesn’t care who slept with Bolo! But Drew is still pissed that in the Isle of Palms, Toya accused her of being with Bolo.

Toya is still feeling some kind of way from when she and Drew first met. Drew had stated her opinion that marriage is work and is sacred. LaToya, who is separated from her husband but still living in the same house, disagreed. And now, Toya slams Drew for bumping and grinding on Bolo’s love wand, while Drew thinks Toya’s nasty attitude is why her husband wants a divorce.

Toya says Drew’s marriage is struggling. Drew stands up and tells Toya not to speak on her behalf, her perfect marriage or her perfect children ever again. Drew reiterates her night with Bolo: he flipped her onto the coffee table, slapped her ass, which she was making clap. She says her husband, Ralph, has no issue with it, so why does Toya keep harping about Drew and Bolo? 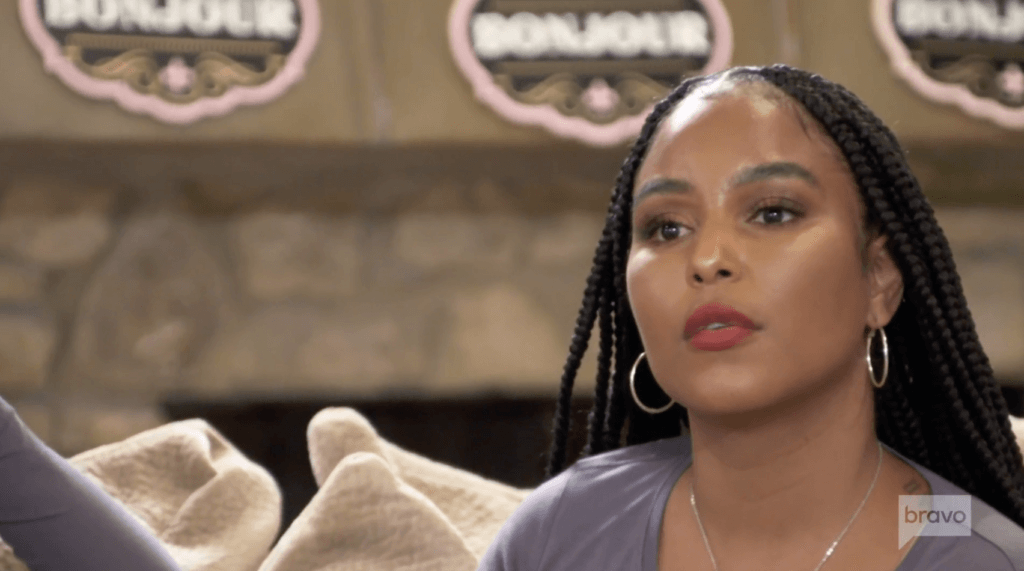 LaToya gives Kenya a pass, though, because she’s going through a lot in her failed relationship with husband, Marc. Toya tells the nieces that Marc has asked for alimony.

Drew steps in and tells Toya to be careful what she shares. That’s Kenya’s business, and Toya is supposed to be her friend. At this point, Toya says divorce isn’t easy. Porsha should know, since she’s been through one, too. And now Porsha is pissed at LaToya for brining her failed marriage into the mis. 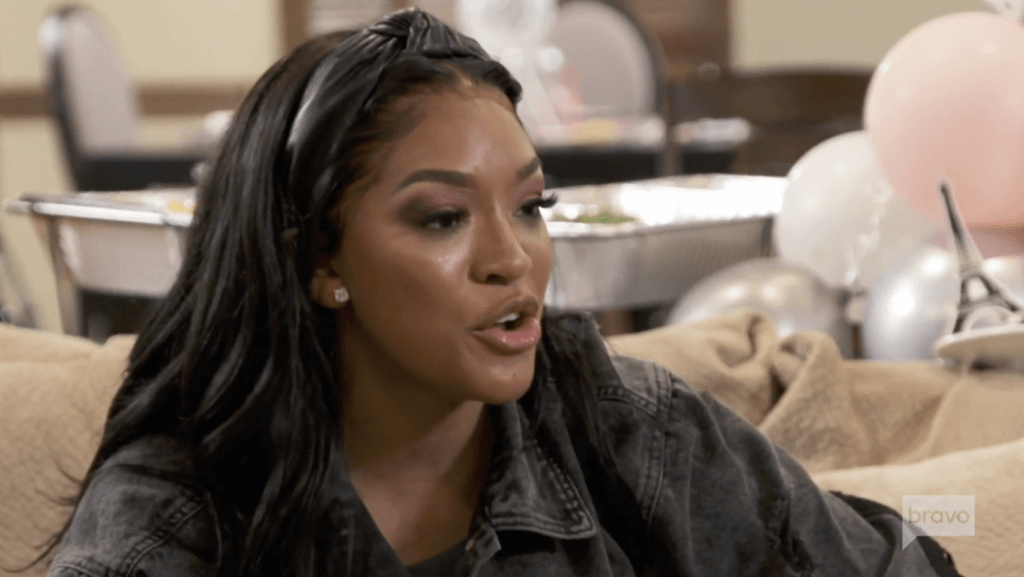 Why is Toya spreading everyone’s business? Toya says it’s because she wants to be friends with everyone. She’s been trying to get to know the women while being friends with Kenya. It’s a delicate balancing act.

Porsha’s not having it. Toya acts like she wants to be friends with Porsha, but if she’s all right with Kenya trying to ruin Porsha’s reputation, how can they ever be friends?

The day of the wedding has arrived. Cynthia shows her mom a pair of bunny ears she plans to wear to bed with Mike on her wedding night. TMI, Cynthia. T. M. I.

Cynthia and her mother talk about their disagreement over Cynthia’s dad coming to the wedding. He’s not going anywhere near a group of people, so her mom can breathe easily.

Kandi’s glam team is getting her ready for her role as bridesmaid. Kenya’s team is doing the same. As is Porsha’s. But she’s more worried about Dennis than how she looks.

When Dennis found out Porsha didn’t want him at the wedding, he assumed she’d be brining a date. So, he went on social media and announced that he was Single AF, which only lent legitimacy to the Bolo rumors.

At the venue, the Bravo crew was unable to film Cynthia’s wedding due to Covid restrictions. So, we’re forced to view Cynthia’s home footage. 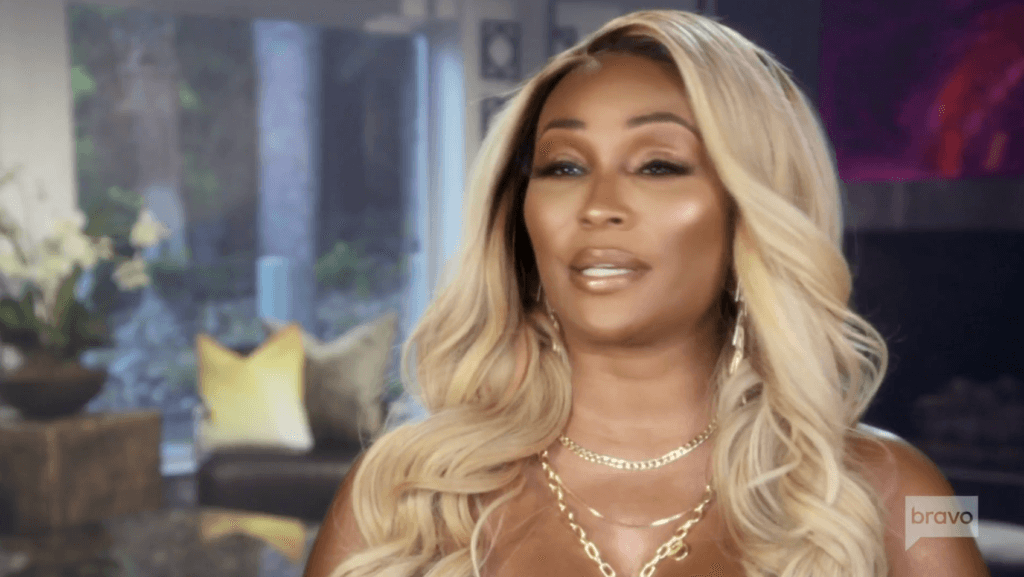 Drew factimes Cynthia, saying she won’t be able to sing. Her voice is shot, but she’ll be there as a guest, along with Ralph.

Cynthia reflects on her wedding to Peter. She admitted at the time it didn’t feel right, but she ignored her mom and sister by going ahead with the wedding. This time, Mike is the right man.

Cynthia’s gown is a gorgeous, beaded creation. She pairs it with a matching, beaded veil.

The guests arrive in their masks and visors. Mike wears a shiny, silver jacket and has his daughter walk down the aisle with him.

All the bridesmaids are dressed in white. Drew is emotional because she wanted a big wedding. At the end, it was Drew, Ralph, her son, and the pastor. Nothing like what she’d envisioned for her big day.

When Cynthia hits the aisle, everyone stands and cheers. Mike looks overwhelmed at the sight of her. We see flashbacks of their relationship over the past couple seasons.

Cynthia kisses Noelle before she faces Mike. They’ve written their own vows, which they read to each other. Cynthia goes in for a kiss before they exchange rings, but Mike holds her off. Once the pastor announces them legally married, Mike and Cynthia are now #Chill for real. 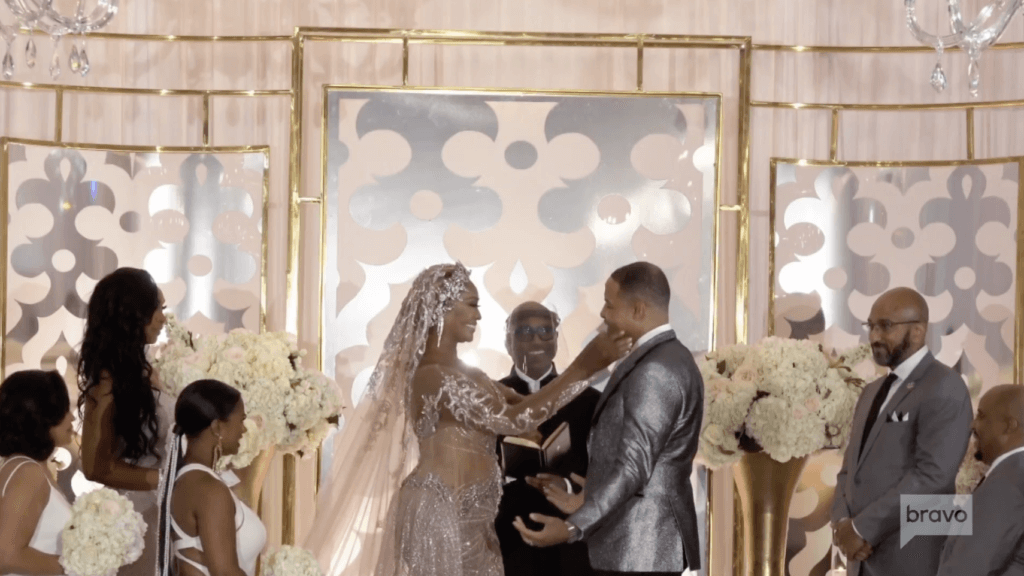 Porsha congratulates Cynthia after the ceremony. She kept far away from Dennis, proclaiming that not even her ex’s presence would keep her away from this wedding.

As we watch Cynthia and Mike have their first dance as a married couple, she goes on about how she’s now married to her best friend. She couldn’t be happier.

Later, Porsha and Dennis have dinner. Porsha wonders what his issues are, why he’s not able to let go. He thinks they both need to behave more maturely. Then why, Porsha asks, did he publicly say he was single when they’ve been broken up for months? Just to make her look bad? 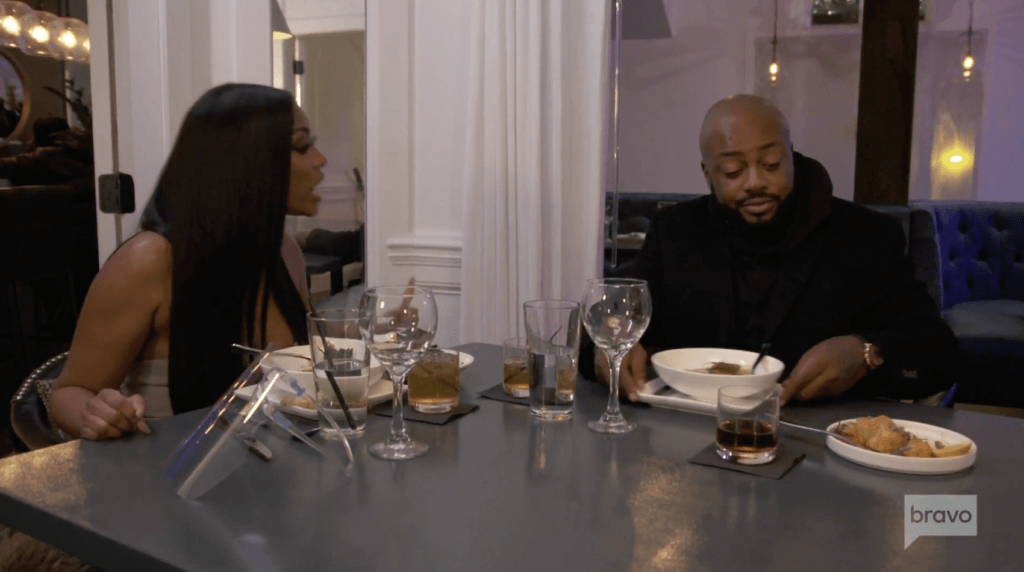 Apparently, Dennis texts her late at night and accuses her of being with another man. Porsha finds that hilarious, considering Dennis is the one who can’t keep it in his pants. When hit with this truth bomb, Dennis deflects and wonders why Porsha keeps brining up topics that have nothing to do with their relationship.

He can’t even remember why they broke up. Porsha doesn’t want to rehash the details, but Dennis needs closure. She finally gives in and tells him that she was really bothered that he didn’t move in with her and kept his own place in the city. Also, little things started piling up for her.

Dennis points out that he never moved in because Porsha kept kicking him out. Where was he supposed to go?

She says that if they didn’t have Pilar, they’d be done by now. He says he’s been vulnerable in this relationship, and he’s tired of putting himself out there. Porsha tells him to move on, as she wipes tears from her eyes. 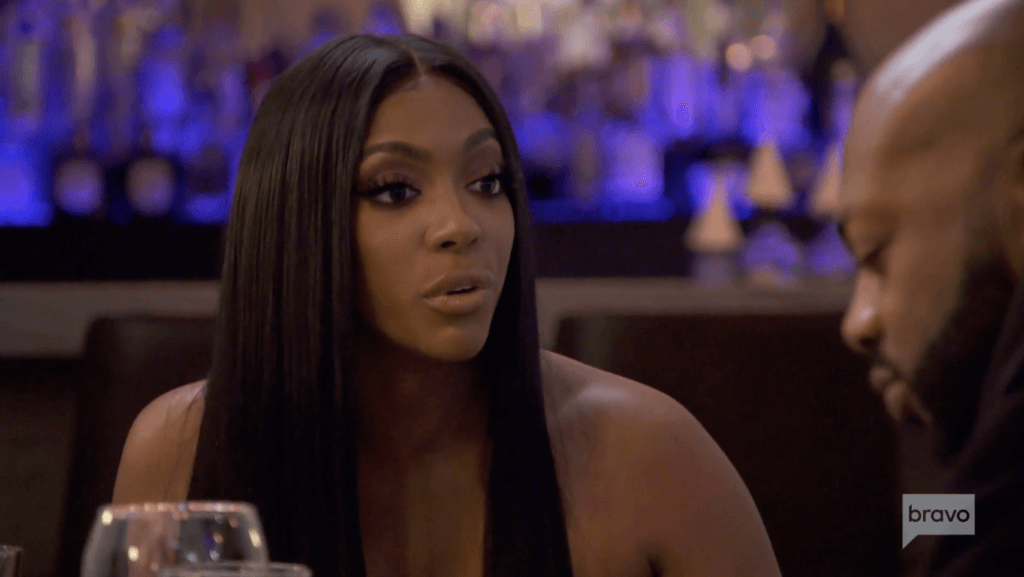 Though Porsha still loves him, she’s ready to end this. They toast to being happy.

And that’s our episode. So, was Cynthia’s wedding worth the wait? Are you tired of hearing about Bolo?