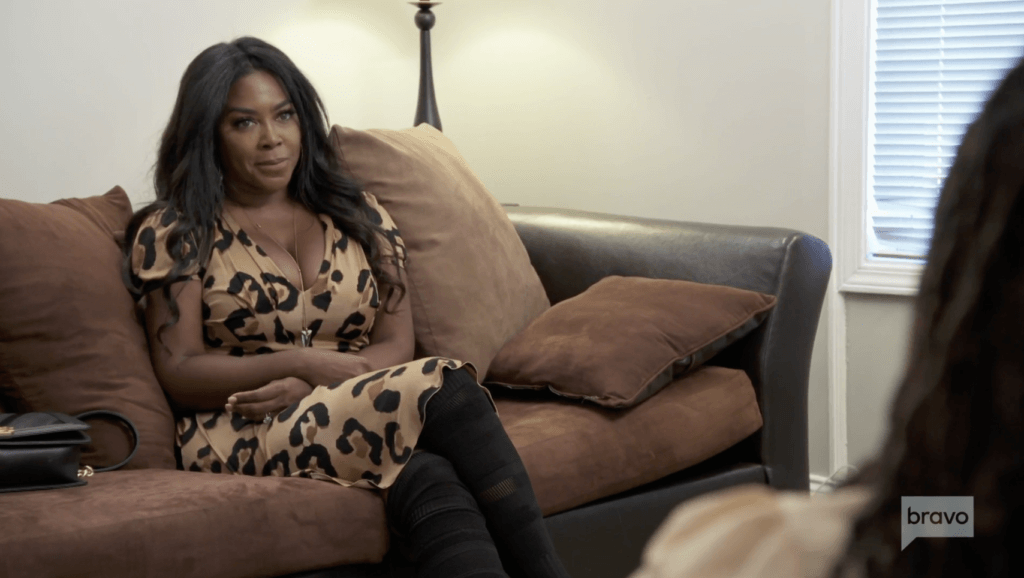 This episode of the Real Housewives of Atlanta begins with a montage of the women. Kandi Burruss instructs Ace to do better on his alphabet.

Porsha Williams tells her mom and sister about the recent girls’ trip and the bachelorette party. Drew Sidora and her husband, Ralph, are practicing their singing scales. Cynthia Bailey is finalizing wedding details when Drew calls.

It’s four days until Cynthia Bailey’s wedding, but her mom’s dress hasn’t come in. Oh, noes! That’s tragic and all, but Drew wants to know what song she should sing for Cynthia’s wedding. 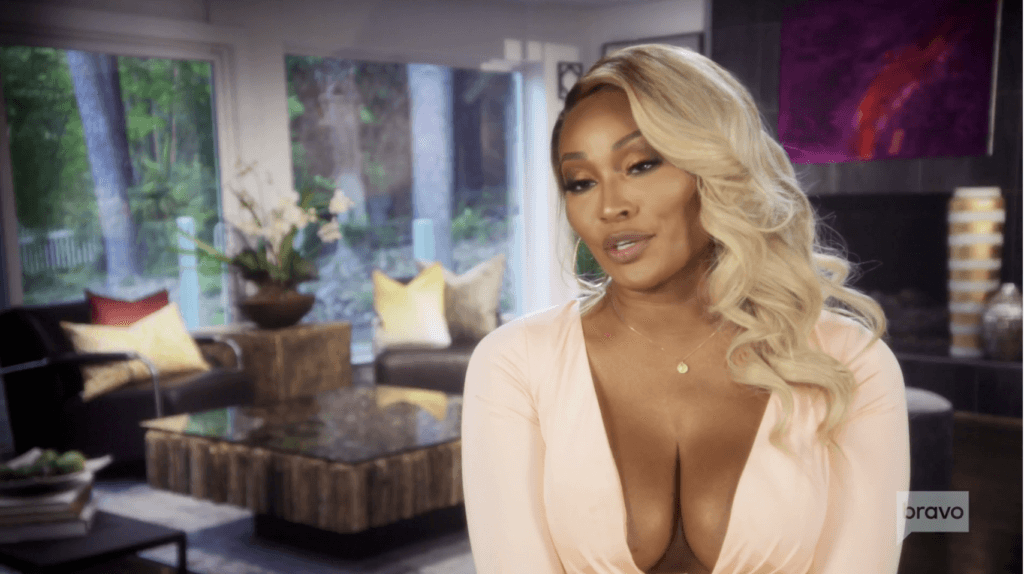 At Kenya Moore’s house, she’s sweeping leaves from the back porch and instructing the nanny to brush baby Brooklyn’s hair while she phones her dad. Dad mentions that Brooklyn’s birthday is coming up soon. Kenya wants to plan a party with friends, not just family. He’s not down with that. I assume it’s because of Covid, so they plan to get together later to celebrate.

Kenya’s father just celebrated his thirty-ninth anniversary with his wife. Kenya spills the tea that Marc has filed for divorce and alimony. Ronald isn’t impressed with Kenya’s husband. Marc might have withdrawn the petition twelve hours later, claiming he was embarrassed and angry that she served him for custody, but Ronald thinks when people ask for money, they’re serious. Ronald wasn’t invited to the wedding, and Kenya now regrets getting her dad’s approval.

Kenya tells us Marc was very upset that Kenya wanted to define their custody terms. He declared it the ultimate betrayal.

Kenya recently started therapy to figure out why she put up with Marc’s nonsense. When she asks what the secret to a great marriage, Ronald tells her that communication and sticking together are what make a marriage last.

Drew Sidora and Kenya meet up later for dinner at an outdoor restaurant. Drew is still confused by the dynamics of the group. The women might fight one night and be perfectly fine with each other the next day, pretending like nothing happened. That’s just not how Drew does it, kids. She wants to hash out all those issues.

Kenya Moore thought Drew attacked her one night on the girls’ trip, simply because Drew pointed out that Kenya might be honest about things (like the private jet) but then texting Drew later to tell her not to tell the other women. Drew thought it was shady, and her final straw was the deal with Kenya bringing her baby, but not giving the other women the opportunity to do the same. At this point, Kenya begins interrupting Drew and getting defensive. Drew just wants to finish her point, but Kenya isn’t hearing it. So, Drew starts singing to shut Kenya up. And for a second, it works!

Kenya is obviously tired of the topic, so she switches up and asks Drew about her husband and the move to a new house. Drew won’t be distracted. She again tells Kenya that it’s hard for her to be separated from her daughter. Kenya thinks Drew is going in circles. Drew just wants to know if Kenya understands where she’s coming from. Um, not really. Kenya thinks if Drew missed her daughter so damn much, she should have gone home.

Drew can’t figure out why Kenya keeps interrupting and why it’s like pulling teeth to get a coherent response from Kenya. They talk over each other, neither hearing the other. But Kenya honestly couldn’t care less. They both ask for the check and a to go box for their dinner. Drew wants to split the check, but Kenya wants to just pay because “broke bitches split bills.” Not so, says Drew. Her friends always split the check. As she leaves, Kenya complains that Drew talks too much. One might say the same about Kenya, no?

It’s now three days until the wedding. Cynthia and her sister, Mal, are shopping for a new dress for mom. That’s not all that’s gone wrong. She’s lost two of her bridesmaids, Mike lost a groomsman, Noelle’s dress didn’t fit, and Mike’s wedding ring, which came from London, was too small. On top of that, there’s a hurricane on the horizon. Yikes!

As they drive, news breaks that two of the Housewives had sex with Bolo at Cynthia’s bachelorette party. Cynthia doesn’t know who leaked the info to the press, but she has her suspicions. (Kenya, perhaps?)

Marlo has planned a harvest event for the women. Everyone’s going to the pumpkin patch except for Cynthia. Kandi shows up first, and she gives all the bachelorette drama to Marlo. Kandi reads the story to Marlo when Kenya rolls up.

Kandi’s pissed that her name is getting bandied in the press for hooking up with Bolo. Kenya tries to say that Marlo knows people at Page Six, but Marlo quickly shuts that down. She doesn’t deal with bloggers because she doesn’t trust anyone. Kenya says someone at the party told a friend, and that friend must have alerted the blogs. Uh huh. 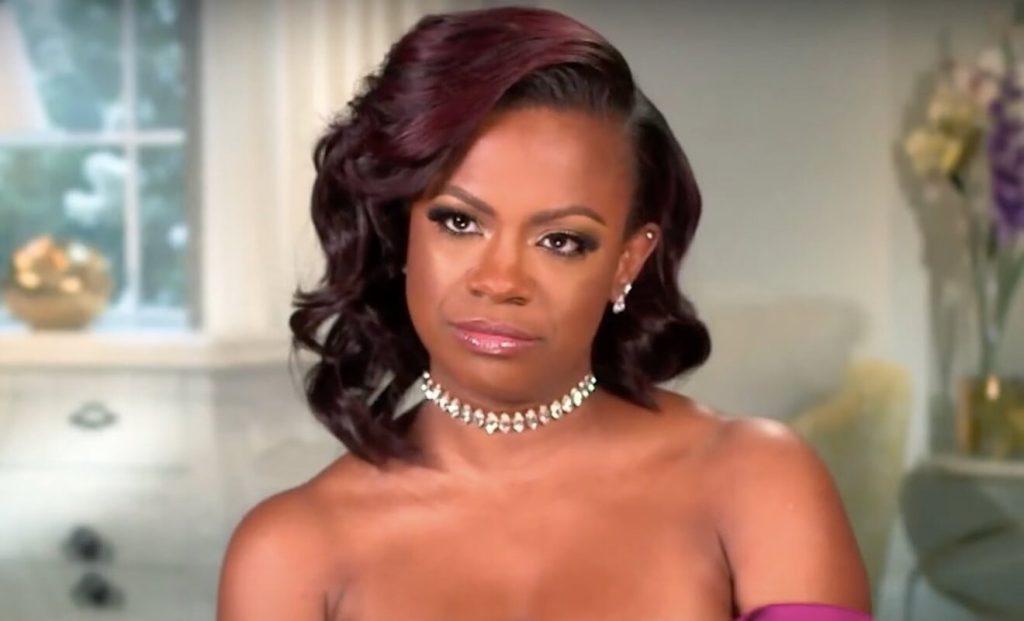 Shamea shows up next. Then LaToya Ali arrives. She wonders if Kenya was the leaker. Nope. If it were TMZ, maybe, but Kenya denies spreading this particular rumor.

Toya doesn’t buy it. She admits that she and Kenya are friends, but anyone who gets on Kenya’s bad side is in trouble. She believes Kenya is behind the leak. Furthermore, she tells us that Tanya has fled back to Canada after the girls’ trip. Since all the women think Tanya and Porsha are guilty of getting it on with Bolo, they think she’s hiding out.

Drew shows up next. She’s already heard the scoop. As soon as she settles in the picnic table, Marlo asks Shamea if she had sex with Bolo. Nope. Kandi wants to know why everyone is so curious about who did it with Bolo.

The women decide to facetime Cynthia. Kandi wants to know if Cynthia has signed a prenup. Nope. She’s planning a postnup. Kandi thinks this is a mistake. Look at Kenya. She didn’t have one with Marc, and now he wants maintenance.

After the gossip session, the women play with a baby pumpkin catapult. But that doesn’t keep them entertained for long, because Toya goes after Drew, saying Drew accused her of disparaging marriage. When Drew disagrees, Toya once again harps on Drew’s bad wig.

The ladies are waiting for Porsha, but she’s lost. So, they hop up on the hay ride sans hay and head out into the fields.

Drew and Kenya discuss their failed dinner attempt, where they wound up taking their food to go. Kenya says “everyone” knew Drew came for her, but when Drew asks the other women, they deny seeing it the same way Kenya does. Well, everyone except for Toya. Then Kenya makes fun of Drew for doing voice warming exercises at the dinner table. The other women laugh as they climb off the truck. 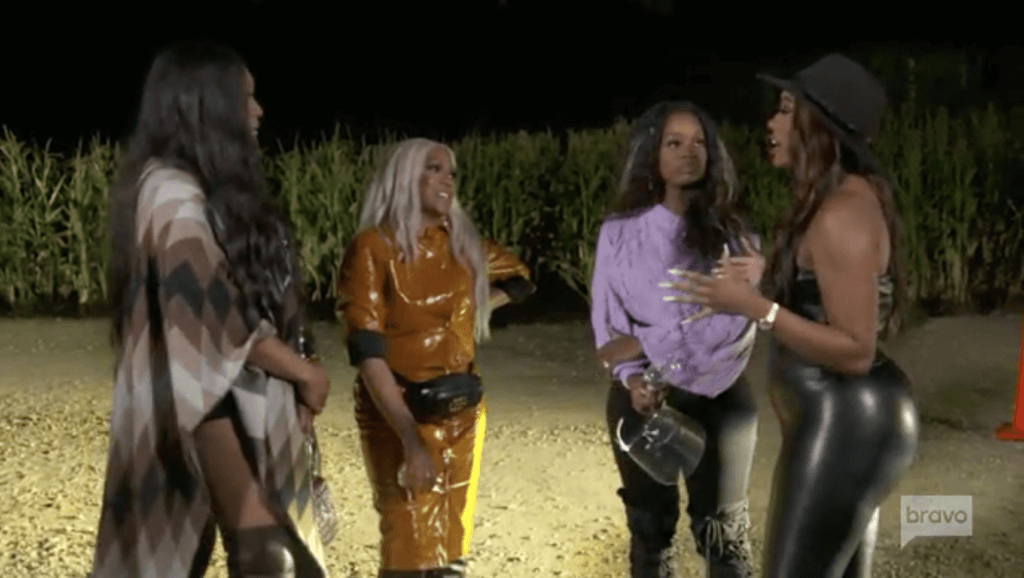 Kenya and Toya leave. Drew wonders if is always so hostile. Yep, she’s told, pretty much. Kandi heads out next, because it’s getting dark.

Shamea, Marlo, and Drew wait for Porsha to show up. She finally arrives and they discuss the blogs. Porsha thinks the leak reeks of Kenya. 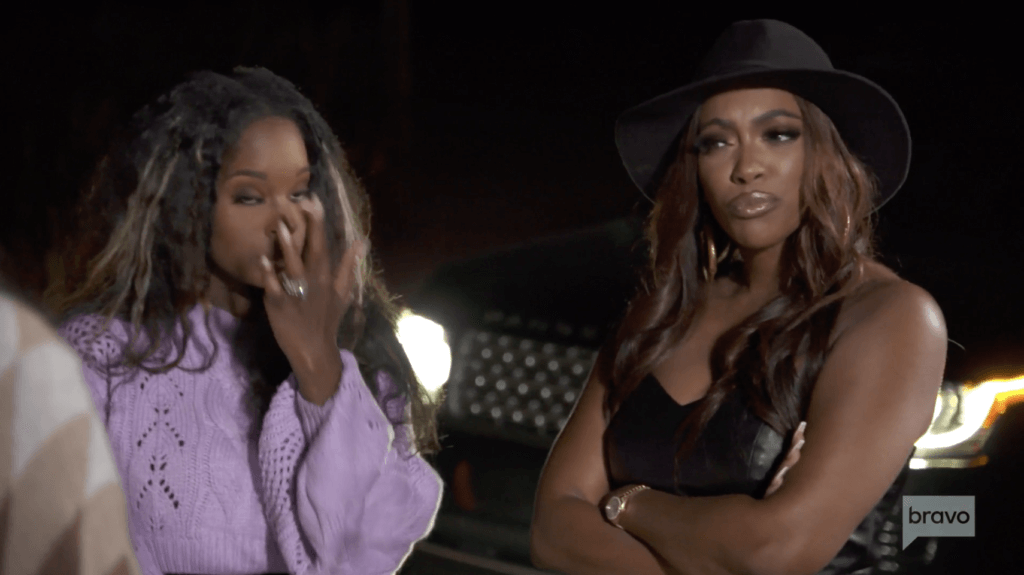 Porsha has had enough of Kenya. And Marlo says that since they made up on the girls’ trip, she hasn’t heard a word from Kenya. She doesn’t think the other women trust her now that she and Kenya are no longer enemies. Porsha feels that Kenya was being calculated in her renewed friendship with Marlo. 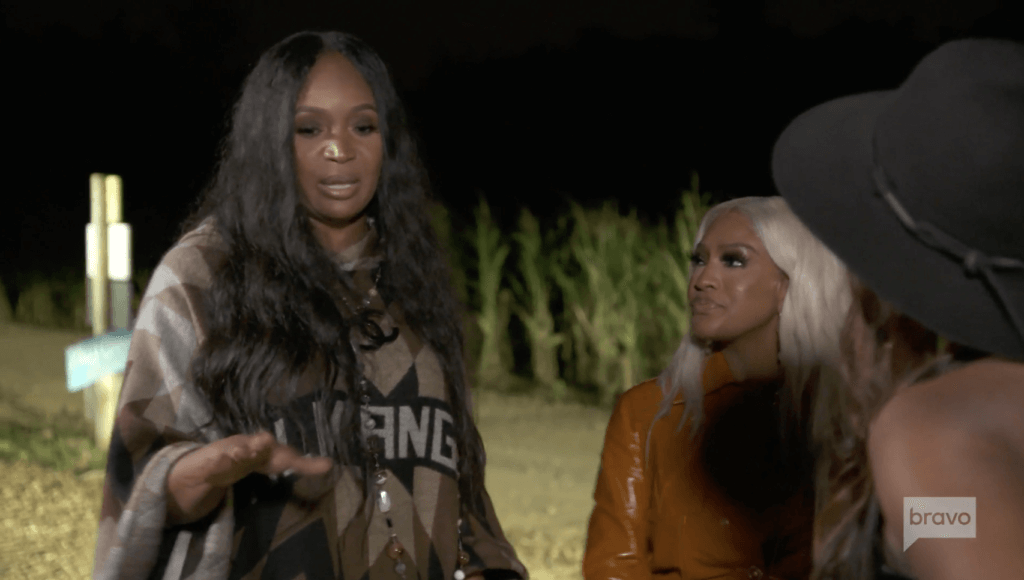 While Cynthia and Mike discuss their wedding with the officiant, Kandi, Todd, Don Juan, and Toya meet for some surf and turf. They discuss Kenya’s upcoming divorce.

Shamea, Drew, and Porsha go shopping. They discuss Kenya and her inability to connect with them. Drew thinks Kenya is sad and that’s what’s keeping her from getting close to some of the women. Porsha doesn’t buy it. She doesn’t want to connect with her nemesis. Never ever. So, they all start singing “never” in the store.

Kenya goes to her therapist’s office. Since they were both tested, they’re mask-free. Kenya wants to talk about her bad choices in men. She likes emotionally unavailable men who aren’t transparent. Even when she sees red flags, Kenya stays with the man hoping things will change. This, of course, all goes back to her mother’s refusal to acknowledge Kenya. 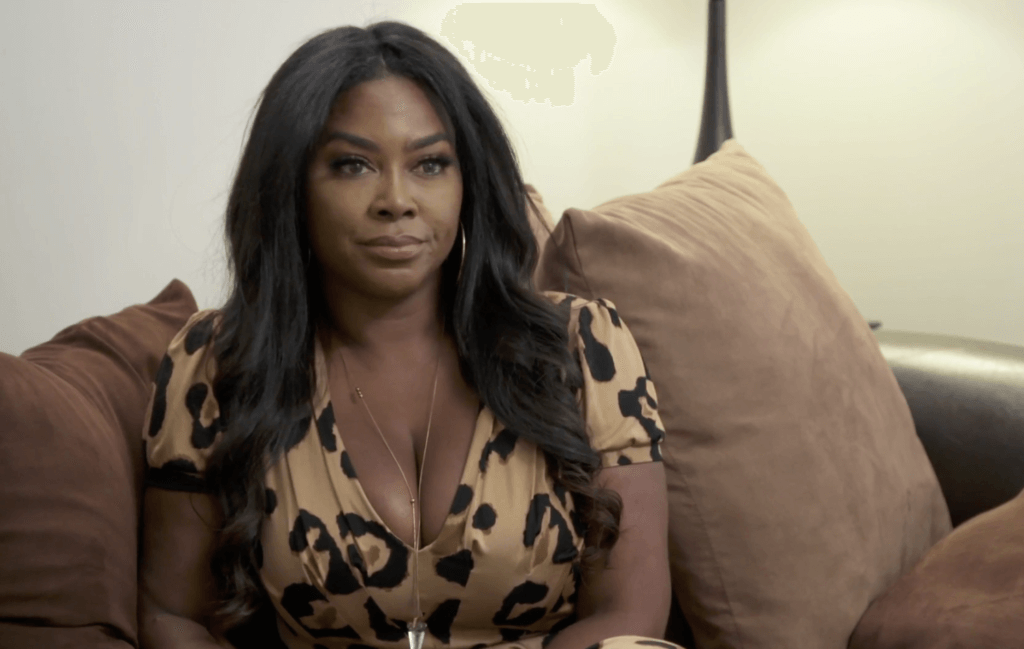 Kenya admits she didn’t want a baby until she was thirty. She was concerned that she’d bring her child into chaos. Kenya cries as she describes her childhood, where family members would stand by and watch as her mother ignored her or treated her cruelly. Her therapist tells Kenya she’s repeating the past in her relationships with men. 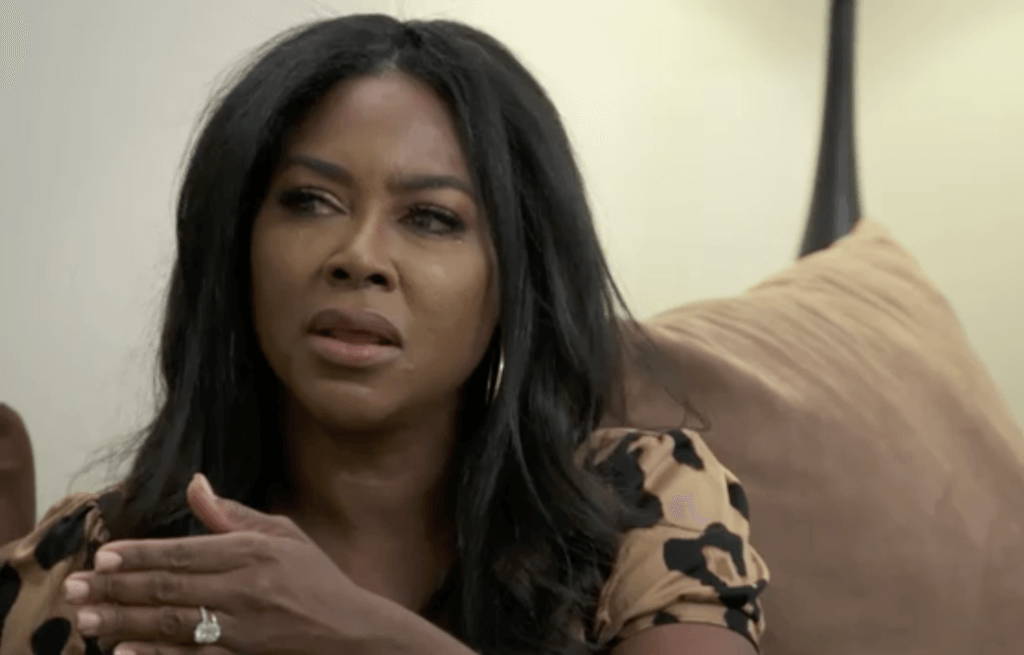 Kenya got in trouble and started skipping school. When she was fifteen, she got involved with a man who was eleven years older than her, and he was abusive.

Kenya wants to move forward with her mother. If she talks about the past, she feels pulled backward into unforgiveness. The therapist thinks Kenya has been suppressing her anger and it comes out in other ways. 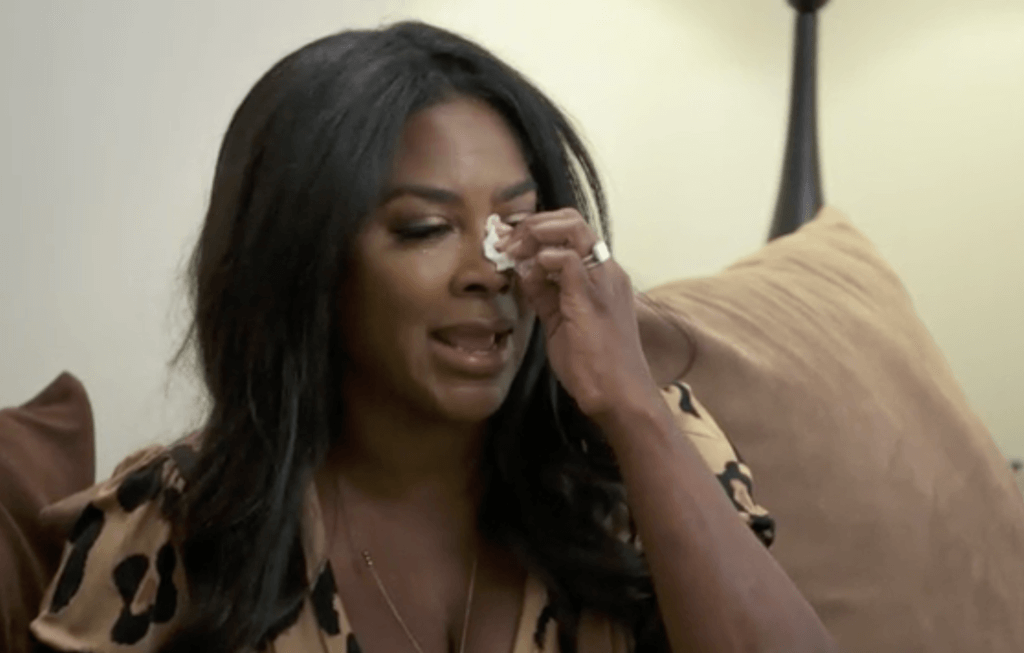 Kenya says her mom and Marc make her feel like she’s the bad guy. She says Marc is like her mother — angry and uncommunicative. Kenya claims she never goes off on people she loves.

The therapist warns her that she will either break down or blow up or her emotions will collapse on her when she gets into another relationship. Kenya doesn’t deal with the pain. She just keeps moving on. 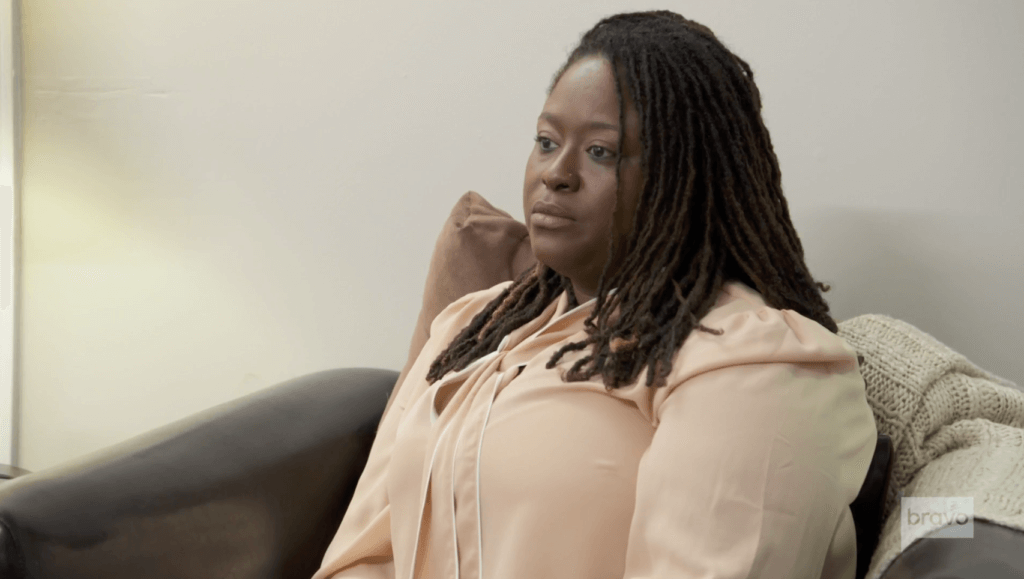 She wants to do her homework and prioritize her happiness. She wants to be a good mom and start the self-healing.

And that’s our episode.

So, did Kenya spill to Page Six? Or did someone else spill the tea on the girls’ weekend?