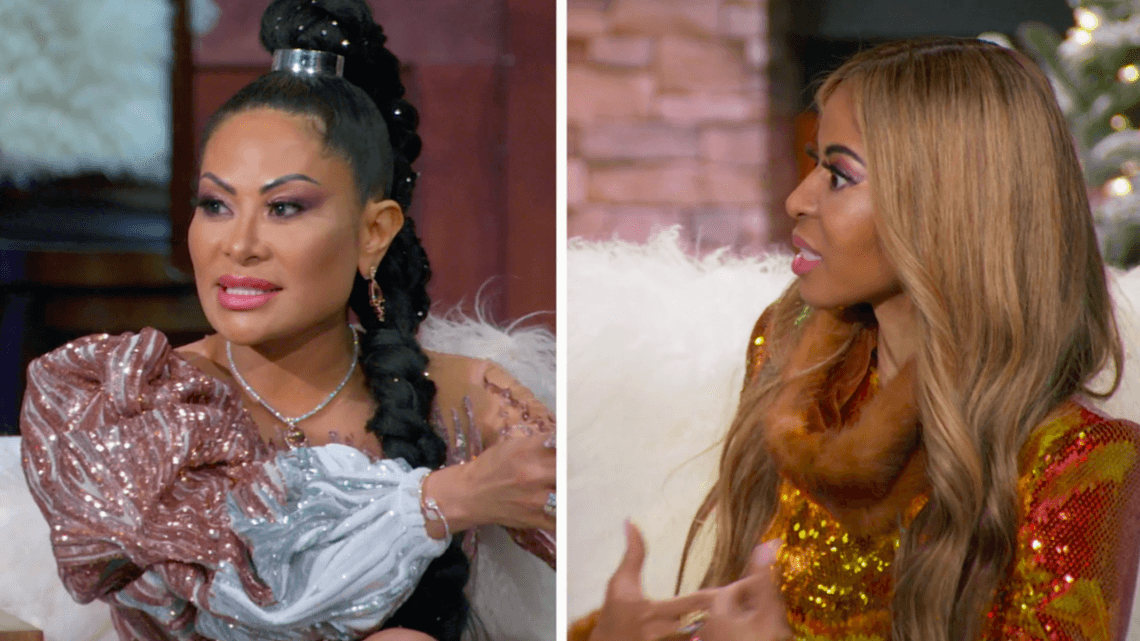 It’s time for part two of the Real Housewives of Salt Lake City reunion, and we start the night with Mary Cosby.

Andy Cohen digs right in to the relationship with her step-grandfather/husband, the removal of her sweat glands, and her contention that Meredith Marks and Lisa Barlow are afraid of Jen Shah.

Mary Cosby explains that her “odor glands” would get boils and her immune system would attack her. It’s a genetic thing.

Mary Cosby had no sympathy for Jen’s aunt, who had a double amputation. She claimed the woman should have eaten right and drank more water. Now, Mary acknowledges that it was cruel, but she felt cornered.

Andy wants to know why Jen was upset when Mary accused her of smelling like a hospital. Jen says she was never even at the hospital that day (contrary to what she said on the show). Andy says Mary’s odor glands might have been removed, but her sense of smell is still in overdrive. Mary sees that as a dig. She says she apologized more than once to Jen, and she’s tired of saying sorry.

Why won’t Mary go into a 7/11 if there were African Americans around the door? She now says she has a fear of all men who hang around a convenience store. Meredith stands up for Mary, saying she has a fear of sketchy people. And as far as black men, they’re not to Mary’s taste. She prefers white men. I’m sure her husband really appreciates hearing that. But she says her husband is white…well, lighter. Okay, fine. He’s black. God, Mary. Please stop!

Mary denies being an internal racist. Then she asks if Jen’s husband, Coach Shah, is racist. Jen shuts her down hard. Mary says the way she says things come across as rude. But she loves all black men and loves her race.

Then, Jen Shah apologizes for calling Mary a grandpa fucker. She was angry and hurt. She never should have said it. Jen posted nasty stuff about Mary, too. Even Heather Gay, Jen’s bestie, thinks Jen went overboard on the Mary hate. She accuses Jen of being cruel on social media.

Next, Andy asks whether Meredith and Lisa told Mary they were afraid of Jen. Let’s get to the bottom of this! Meredith admits to saying she didn’t understand why Jen flew into a rage at every cast event. But she never said she was afraid of Jen.

Whitney Rose jumps in and says Mary shared that Meredith and Lisa didn’t like the way Jen talked about Mary’s marriage. They didn’t want to say anything to Jen’s face because she had a meltdown every time Mary’s name was mentioned.

Mary now admits that neither Lisa nor Meredith said they were afraid of Jen. But she felt they really were scared of Jen’s temper, so she passed that on to Whitney. Oh, this game of telephone didn’t end well, did it?

Lisa wants to know why Whitney and Heather were quick to tell Jen what Mary had said. Even if it wasn’t true. When Heather tries to answer, Lisa (as usual) talks over Heather and tells her she’s not done speaking.

Lisa Barlow insists she’s Jen’s friend. She would never, ever be afraid of Jen Shah. Heather and Whitney both shout out that Lisa is in no way Jen’s friend. And she’s been a shitty friend to Meredith, too. Meredith disagrees.

Lisa Barlow becomes irate when she accuses Heather of talking about Meredith’s marriage. She calls Heather disgusting and a fucking liar. She points her finger at Heather and curls her face in fury. Then she tells Heather to seek therapy outside of Andy Cohen. Yikes!

Meredith now pipes up. She tells all the women to shut the hell up about her family and her marriage. Anyone who has a comment isn’t her friend.

Mary now addresses her marriage. There is no will stating Grandma wanted Mary to marry Robert Sr. Grandma told Mary to take her place. She didn’t tell Robert, though. But then Mary backs off that and says that since Robert Sr. was twenty years younger than Grandma, she told him that should anything happen to her, he should marry one of her girls.

The beginning of Mary’s marriage was rough. They’d never been close, not like a couple, at least not before marriage. Just like Mary’s cousin and great aunt clean her house, but she doesn’t know anything about their lives. They don’t hang out. They’re not friends. And since her family live in a tiny apartment and she lives in a great big house, someone’s got to clean it. (She literally said this!) She pays their rent. What more could they want? Anyway, those relationship were just like the beginning of her marriage to Robert. They weren’t close.

Robert is eighteen years older than Mary. By now, she wants to say she’s in love with him. She thinks she is, at any rate. And she’s happy, so…

Mary was married prior to Robert Sr. She claims she didn’t divorce him to marry her current husband. She was young —nineteen — and so was her ex. Andy asks if she and Robert are physical, and she says no. “You can’t go through a marriage for twenty-two years and be happy.” Then she starts crying as she admits they sleep in separate rooms.

But then she turns around and states that she is happy. Robert buys all her designer clothes. So, Chanel bags equal happiness. I guess that’s the winning formula, kids!

Andy asks about the leaked audio of Mary yelling at her congregation for not giving her presents and cards on her birthday. She admits it’s her, but says it was taken out of context. She never called her flock stingy. Mary also denies her church is a cult.

Mary says her clothes and houses and lifestyle aren’t funded by her church. There’s no way her small church could possibly keep her in Chanel bags. By marrying Robert Sr., she got a part of Grandmother’s inheritance—businesses, restaurants, and title companies.

Heather is up next. We see her package which focuses on her divorce, being shut out from the Mormon church, her need of a new man, and a successful business.

Whitney has seen a big change in Heather since the filming of the show. Heather is now honest, raw, and real. She’s grown as a woman because she had to voice some things she’d been avoiding for years.

Heather now sees herself differently. She doesn’t need anyone’s approval. Heather says the show has been transformative for her. It’s healed her.

Though Heather has always taught her daughters to be abstinent, she now wants her kids to have multiple partners. When they’re ready. They should get wasted once in a while and live. Mary’s eyes nearly fall on the floor at that pronouncement.

Heather has heard from marginalized Mormons — gay Mormons and females, mostly — who’ve been super supportive of her. Lisa butts in and says the same people love her, too.

Still, Lisa thinks Heather’s ego has skyrocketed since the show aired. She doesn’t understand Heather. Is she mouthy or mousy? Pick one!

Heather is still pissed that Lisa acts like they don’t know each other. They’ve hung in the same friend circle for twenty years! But now it comes out that Lisa recommended Heather for the show, claiming they only met in 2017. She brings receipts and shows the text exchange with Heather.

Heather discusses her jealousy of Meredith and Lisa. She thought Jen was putting her on the backburner to be friends with the two brunettes. Jen wanted to be part of the glam group. It took forever for Jen to post a pic of herself with Heather. And why did Jen go after all her castmates except Lisa? Because Lisa manipulates Jen, of course. Lisa thinks this is outrageous.

Whitney now pops off and says Lisa never thought Whitney was good enough to be a Housewife. Lisa’s put her down repeatedly. Lies, declares Lisa. All lies!

Andy calls for a break at this point, but the cameras are still rolling. Lisa now confronts Heather, saying she knows her now and calls Heather a liar.

Heather says Lisa has been a better friend to Jen than she was to Meredith. Heather thinks Lisa tries to latch on to anyone who’s higher in rank, and that’s leveling up. Lisa thinks if they want to move forward, Heather needs to drop this. Heather’s not that interested in moving forward with Lisa.

Lisa tells Heather to stop putting a wedge between her friendship with Meredith. Heather says Meredith’s taken enough hits, and Heather doesn’t want to add to them. She’s disappointed that Lisa hasn’t had Meredith’s back throughout the reunion. Now, Lisa stands up and yells across the stage at Meredith.

Andy clarifies that because Lisa has been defending Jen, she hasn’t been there for Meredith. (Because Jen went after Meredith, her son, and her marriage during the season and on social media afterward.) But Lisa interrupts Heather’s explanation. She marches on the stage pointing at everyone’s chair, saying Heather wants no one to be friends with Jen.

No, Heather says, that’s not true. She just wants Lisa to be accountable for all the shit she said during the show, shit Lisa now refuses to answer. But Lisa thinks Heather lives in her head, where she makes up stories that aren’t true. She then tells Heather to go read her press, she’s through trying to be friends with Heather.

Lisa goes on to talk to Whitney, saying she can’t reconcile with her because Heather won’t like it. Whitney says Heather is not her keeper. Meanwhile, Meredith tries to tell both women they need to stop attacking each other and listen.

Whitney tells Lisa it’s fifty-fifty, and if she wants to know why Whitney doesn’t think Lisa’s a good friend, they can talk about it. Instead, Lisa bows down to Whitney and apologizes for breathing. She knows Whitney doesn’t like her, and frankly, Lisa doesn’t care.

Heather pauses in the reapplying of her lip gloss to comment that Lisa seems to care an awful lot. Look how she’s acting right now.

Meredith points out that everything Lisa says is badly interpreted by Heather, and vice versa. But…didn’t Meredith just hear the nice things Lisa just said about Heather? Nope. Meredith disengaged and wasn’t listening. Well, I was, and I don’t remember her saying anything nice about Heather.

As Heather and Lisa continue to fight, Whitney excuses herself to go to her room backstage and grab an Advil. Meredith goes with her.

Lisa keeps after Heather. Heather says Lisa’s in last place — in life. Lisa thinks Heather is mean. Heather says it’s her defense mechanism and asks Lisa to stop talking to her. According to Lisa, this is how Heather always acts. How would Lisa know? She’s denied knowing Heather until 2017!

Angry, Lisa walks off the stage. She wants to give her husband a hug and get out of the negative atmosphere. She yells at the crew to bring John to her. They don’t.

As Lisa stumbles backstage, we hear her tearfully saying the situation is abusive. She doesn’t have friends like this! She rails to John and cries that Heather doesn’t want Lisa and Jen to be friends. Also, Heather is obsessed with Meredith. She tells the cameraman to stop filming this moment with her husband, who looks befuddled. Will she return to the stage or duck out?

And that’s our episode. So, who is right — Heather or Lisa? And why are these women fighting over Jen, anyway? She’s not exactly a prize in the friend department.