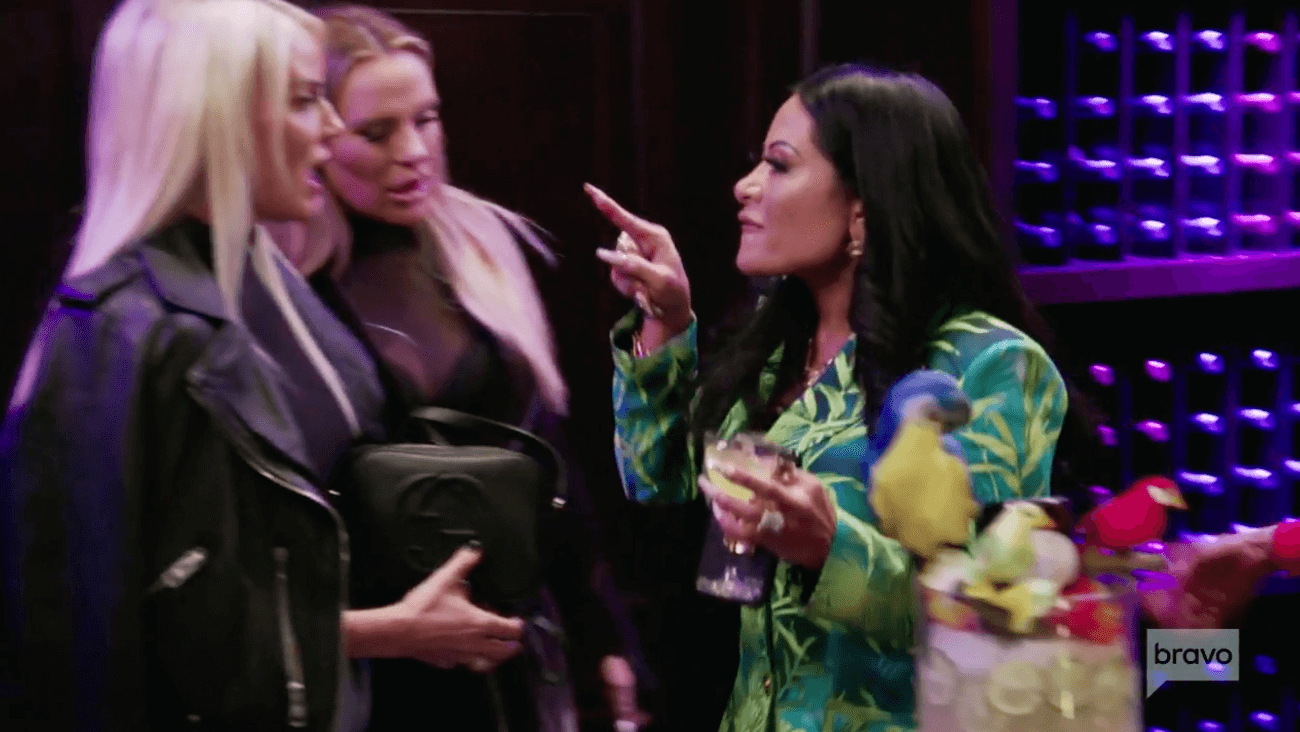 The ladies from the Real Housewives of Salt Lake City are still in Sin City. Jen Shah is getting ready with her glam squad, while Whitney Rose stops by Heather Gay’s room before dinner.

Whitney tells Heather about her afternoon on the racetrack. She even had a great time with Meredith Marks and Lisa Barlow. They accepted Whitney’s apology and are starting over. Whitney hopes that now they can have a fun dinner, with no simmering resentment.

Heather knows that won’t happen. During her private shopping spree with Jen, Heather discovered that Jen is still seething over Whitney. She blames Whitney for ruining Coach Shah’s surprise birthday party, taking no responsibility for her own part in the debacle.

Meredith and Lisa agree that they feel better about Whitney. They’re looking forward to a clean slate.

Jen shows up for dinner and hugs the two ladies. They tell Jen they’ve forgiven Whitney and are excited to turn the page. Jen isn’t happy they’ve forgiven so easily. She thinks Whitney lied about Meredith and Lisa being afraid of Jen’s anger. Meredith corrects Jen, saying Whitney didn’t lie, she just repeated what she’d been told.

Jen is getting agitated at this point, but Lisa keeps reiterating that Whitney apologized. Lisa accepted the apology, and it’s over, as far as she’s concerned. Meredith says as long as Whitney’s behavior changes, she’s good.

Jen thinks this means Meredith and Lisa are on Whitney and Mary Cosby’s side. But she’s on the side of right, damn it!

Meredith, who avoids conflict at all costs, gets up and walks out. She doesn’t appreciate Jen cursing at her and telling her who to like. That’s so middle school.

Meredith tells us that when her parents divorced, they used her as a pawn. She was stuck in the middle. She tried to please everyone but wound up disappointing both parents. Jen’s anger is triggering.

Jen starts crying and spills her drink as she rants about Whitney. And who should walk in right at that moment? Whitney and Heather.

Jen stalks past them and out of the dining room. When Lisa places her hand on Jen’s shoulder to keep her from storming off, Jen reaches out and slaps Heather’s hand. Now Heather’s pissed. She doesn’t deserve this kind of treatment from Jen. She doesn’t even know what the hell is going on.

Jen’s purse is still in the room, so she comes back in and shoves her finger in Whitney’s face, saying, “If you want to fucking talk, then talk to me, Whitney.” Then she asks for her purse, turns on Whitney, getting up in her personal space, and says, “Shut the fuck up.” (So, which is it? Does she want Whitney to speak or stay quiet? Jen’s all over the fucking place and her argument makes no sense.) Then she wags that two-inch fake nail close to Whitney’s eyeball. Gee, I wonder why these women are afraid of her!

Heather chastises Jen, tells her not to come at Whitney. So, Jen screams in Heather’s face. She yells that Heather has chosen Whitney’s side.

Jen’s bodyguard steps into the room and follows her out of the dining room and into the casino. (Why does she need a bodyguard? To protect her or keep her from attacking the other women?) Lisa follows and attempts to reason with Jen. It’s a losing battle.

Jen says Whitney is never going to have Lisa’s back. (Again, what the hell is she talking about?!) Lisa reminds Jen that she is walking with her, she hasn’t left her side. And she never claimed that Whitney would have her back. She simply accepted Whitney’s apology.

If Jen’s still upset about the surprise party, she needs to speak to Whitney. That’s what Lisa will do, and she heads back to the dining room. But Lisa’s on her own. Jen’s not going back.

Whitney and Heather are shaken by the confrontation with Jen. Lisa steps in to speak with them, and Whitney says she doesn’t feel safe. Lisa thinks Whitney doesn’t understand how much trouble the party caused in Jen’s personal life.

Whitney has had enough of Jen’s bullshit by now. She tells Lisa that Jen has talked about both Lisa and Meredith behind their backs. Lisa’s anger flares, because Jen said she’s been a loyal friend.

Jen is in her hotel room raving on the phone to her husband. She complains that no one ever stands up for her.

Heather, Whitney, Meredith, and Lisa all meet in Heather’s room so they can understand what Jen’s been saying about them. Jen has spread gossip about Meredith’s marriage and that she dated another man while still married to husband, Seth. And Jen called Whitney the night before the trip, saying Lisa planned on coming after Whitney and commiserated with her.

Whitney believes Jen has been whispering in her ear to get her stirred up. She wanted Whitney to go after the other women so that her own hands looked clean. Fortunately, Whitney didn’t take the bait.

Meredith admits she and Seth have separated several times. And they’ve both dated other people while they’ve been apart. But now they’re together and happy. For Lisa, this is the first time she’s heard that Meredith was dating other men and her feelings are hurt.

Lisa questions if she wants to be Jen’s friend. Heather isn’t conflicted. She loves Jen, and she doesn’t want to cut her out of her life. But as Lisa points out, Jen doesn’t defend Heather the same way Heather defends Jen. It’s an unbalanced relationship.

The next morning, all the women are having breakfast in their rooms. Heather tells us she received a text from Jen. She was told to get the clothes and shoes she bought the day before. Jen’s on her way to the airport.

Back in SLC, Mary is drinking her ubiquitous smoothie and takes a facetime call from Lisa. Lisa tells her how Jen freaked out the night before. Mary was smart for not coming on the trip.

At the hotel, Whitney, Lisa, and Meredith wait for Heather in the lobby. Heather tells them to leave without her. She’ll catch up with them in a bit.

Heather goes to Jen’s room, expecting her glam squad to still be in residence. They are, and so is Jen, getting pampered and petted by her paid lackeys. Heather’s shocked to see her. Jen says her glam squad talked her into staying.

Jen acts like nothing happened the night before. She plans on going shopping on her own and hasn’t talked to the other women.

Jen is portraying herself as a victim. She says no one wants to talk about the issues, and she’s frustrated. Heather breaks it down: Jen’s pissed because Meredith and Lisa made up with Whitney. Jen claims that’s not the case, but she can’t forgive Whitney until the woman admits she lied. Or until Lisa and Meredith say they really are afraid of her.

Heather calls Jen aggressive and mean. But Jen simply can’t understand how she’s the problem. People keep poking at her, and that’s why she gets upset. That’s why she threw the glass at the party. That’s why she smacked Heather the night before. That’s why she swore a blue streak and stomped around like a three-year-old toddler. Riiiight. It’s everyone else’s fault.

Jen says the women need to admit they messed up and apologize. Heather tells Jen the person who fucked up is Jen. She’s the one who needs to make amends. Jen refuses to take any responsibility for her actions.

Whitney, Lisa, and Meredith drive to a private home to meet Kim, a hypnotherapist. Whitney wants Kim to help the group clear up the negative energy.

As Kim starts leading them through meditation, Heather and Jen arrive. The peaceful vibe takes a nosedive the moment Jen walks in.

Kim leads them through a relaxation exercise. Jen admits she’s not comfortable among the other women. She wants to know who her real friends are.

Kim takes them to a large living room. Kim says the group is damaged. She can feel it!

Jen wants to know why the ladies think this thing was all her fault. She doesn’t even understand why Meredith left the table.

Meredith won’t be dictated to, and she’ll decide who her friends are, thank you very much. And she won’t allow someone to get aggressive with her.

Jen wonders why the women didn’t say that the night before. Lisa explains they both said exactly what they felt, but Jen didn’t hear it.

Jen tells Whitney she shouldn’t have brought shit up at the surprise party. It was terrible timing.

Jen says both Lisa and Meredith claimed Whitney lied on them. Now, she just wants Whitney to tell the truth.

Lisa disagrees. As she tries to explain, Jen says it’s her time to talk. Thing is, she’s been the only one talking this entire time.

Jen claims she defends her friends. She’s loyal to the end. Meredith isn’t buying it. Jen has been talking about Meredith’s marriage. And that’s not cool. Jen denies it.

Whitney says Jen absolutely talked about Meredith and her marriage. How else would Whitney have known Meredith was seeing another man?

Heather tells Jen she needs to apologize to Meredith. But Jen can’t apologize without qualifiers. Kim tells her to say she’s sorry and leave it at that. Jen finally spits out the words, but you can tell she’s not sincere.

Kim asks the women if they trust Jen. No one in the group trusts her. Jen feels like the women are ganging up on her.

Jen says she doesn’t trust Heather. Heather is outraged. In every event where Jen has gotten angry and stormed off, Heather has followed and tried to calm the situation. Heather has defended Jen all season.

Heather accuses Jen of being aggressive and violent the night before. She tells Jen she’s a shitty friend.

Lisa’s tired of Jen getting out of control. Lisa no longer wants to be Jen’s friend. And Heather says Jen is on the brink of losing her friendship, as well.

And that’s our episode. So, do you think the women should continue to try with Jen? And what do you think of the newest franchise?