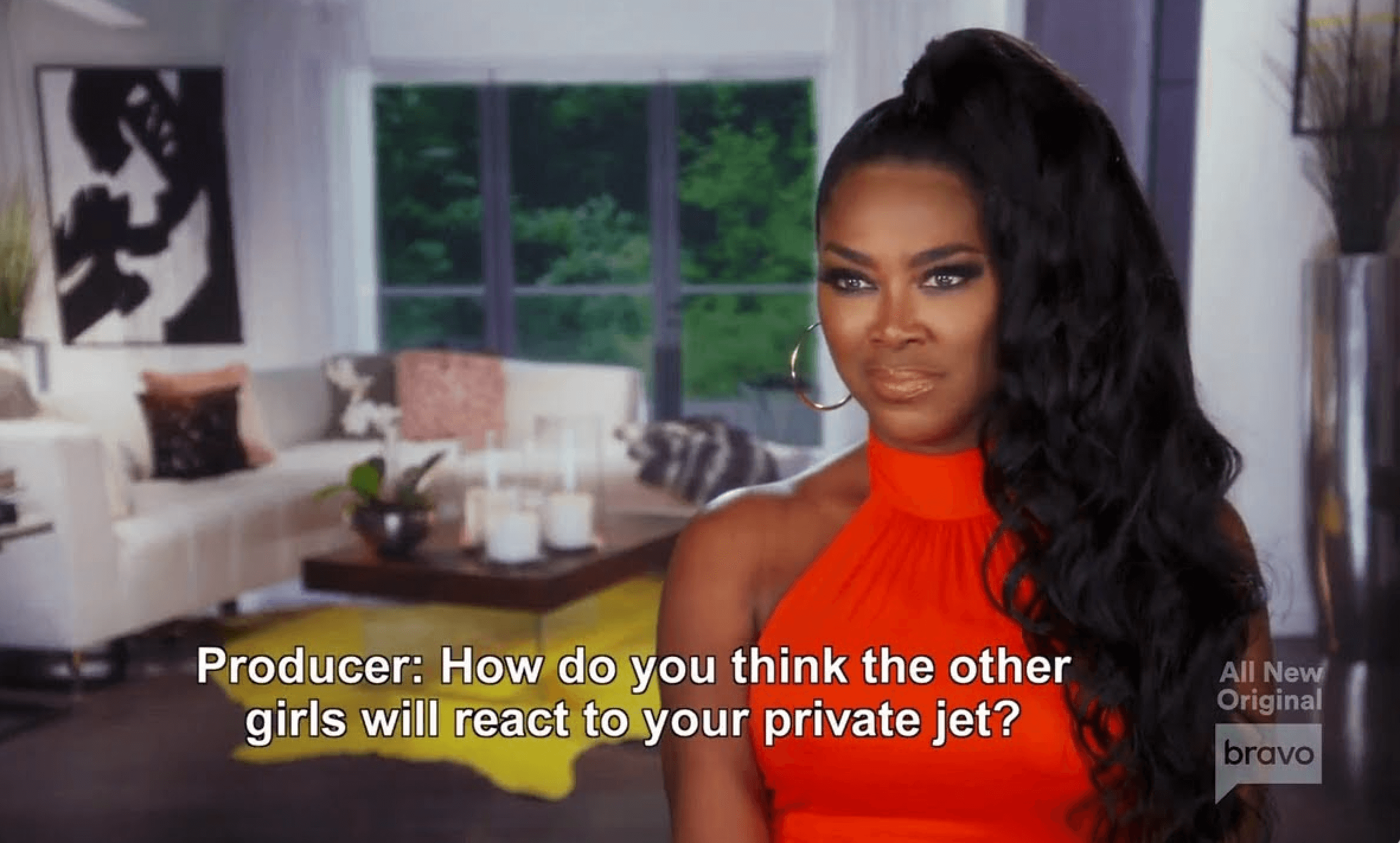 We begin our Real Housewives of Atlanta episode with Cynthia Bailey tooling around town, trying to call her fellow Housewives, but no one is taking her calls. Kandi Burruss is busy talking to her daughter, Riley, at college, who’s making friends and out of quarantine. Kenya Moore is chatting to her aunt about her swollen finger. As a consequence, her wedding ring is stuck. Porsha Williams is outside, breathing with a coach.

Drew Sidora is still recovering from her Achilles heel surgery. Her husband, Ralph, buys her a scooter so she can accompany him on walks. She’s tired of being immobile for the past six months. Though they’re moving into a new home, Sidora plans on going on the girls’ trip, leaving him to handle the packing and moving. But before the big trip, she wants to have the women come over to her house for a get-together.

Kenya and LaToya Ali meet up for brunch. Kenya craves chicken and waffles, but she’s trying to lose weight. LaToya tells Kenya to have some self-control, so she orders a cheeseless veggie scramble.

Kenya brings a new bra and panty set to LaToya. They don’t fit her anymore, so she’s passing them on.

Kenya is planning the girls’ trip. She’s made arrangements for herself, her nanny, her baby, and LaToya to take a private jet to South Carolina. Everyone else can take the sprinter van. But she wants to arrive ahead of time and get the baby settled. 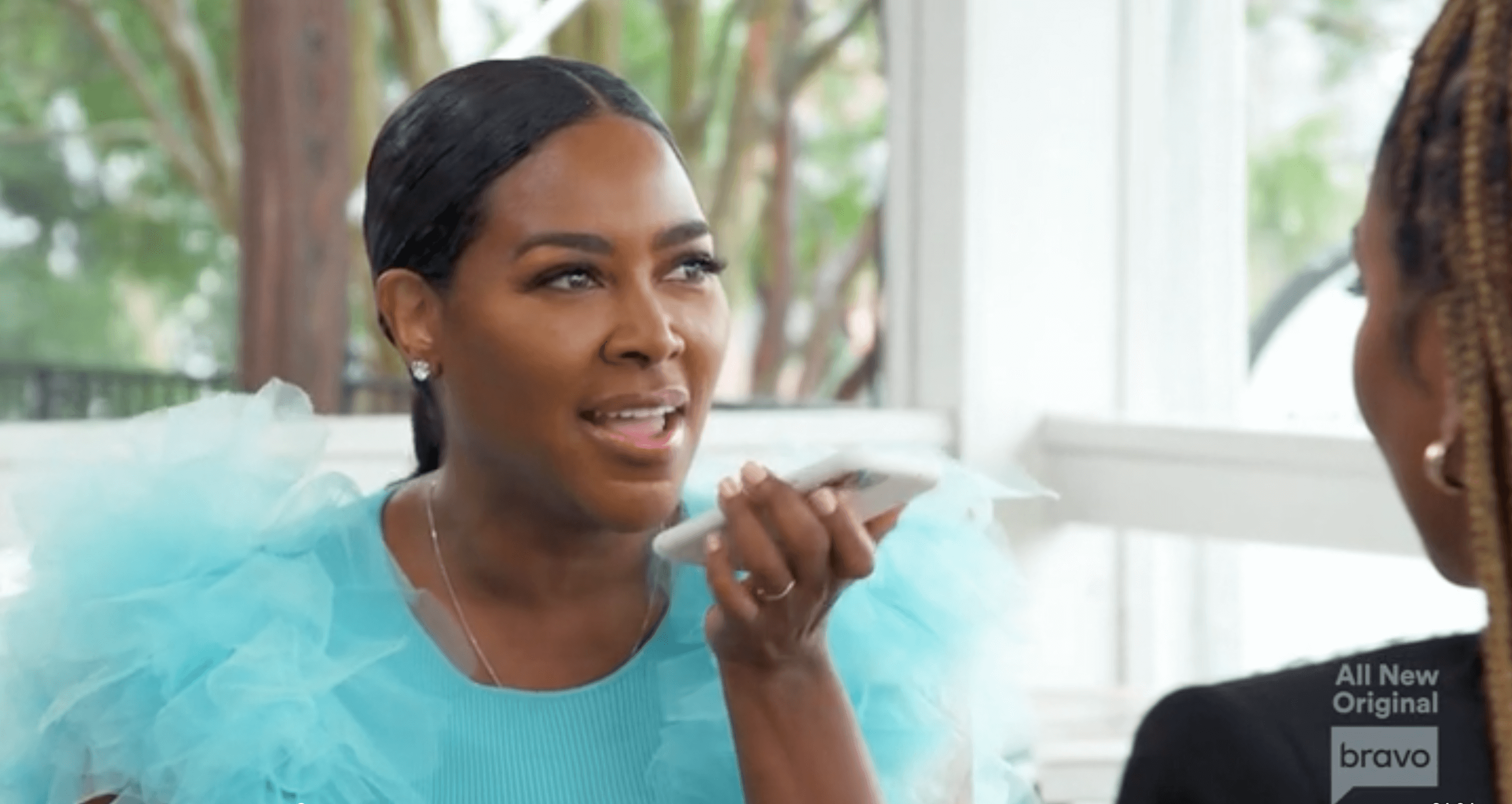 During brunch, Drew calls Kenya, who spills the private jet news. Drew invites Kenya for the dinner, and by default, she issues an invitation to LaToya, too.

Kenya tells LaToya that she and her husband, Marc, can’t talk about anything. Plus, he has a lot of rules regarding Brooklyn. He won’t allow the baby to leave the country on vacation or even appear in Kenya’s haircare commercial. We see a flashback of Kenya talking to her attorney. She’s ready to file for divorce and gain back control. Though they’ve been separated for a year, she’s afraid of what Marc might do in retaliation.

The night of Drew’s dinner has arrived. She’s showing off her house one last time before the big move. And she’s doing it Hollywood style. How it differs from the ATL style is unclear. Gold vases maybe?

Cynthia arrives first. But as she rings the bell and waits to enter, Drew and her husband are naming her wig as they stand on the back porch. Finally, they realize Cynthia is at the house.

Cynthia bores Drew with wedding details but is saved when Kandi shows up. She, too, knocks several times, but no one hears her. Kandi just lets herself into the house. Sidora finally tells Ralph to monitor the door, and the ladies step outside on the back porch. 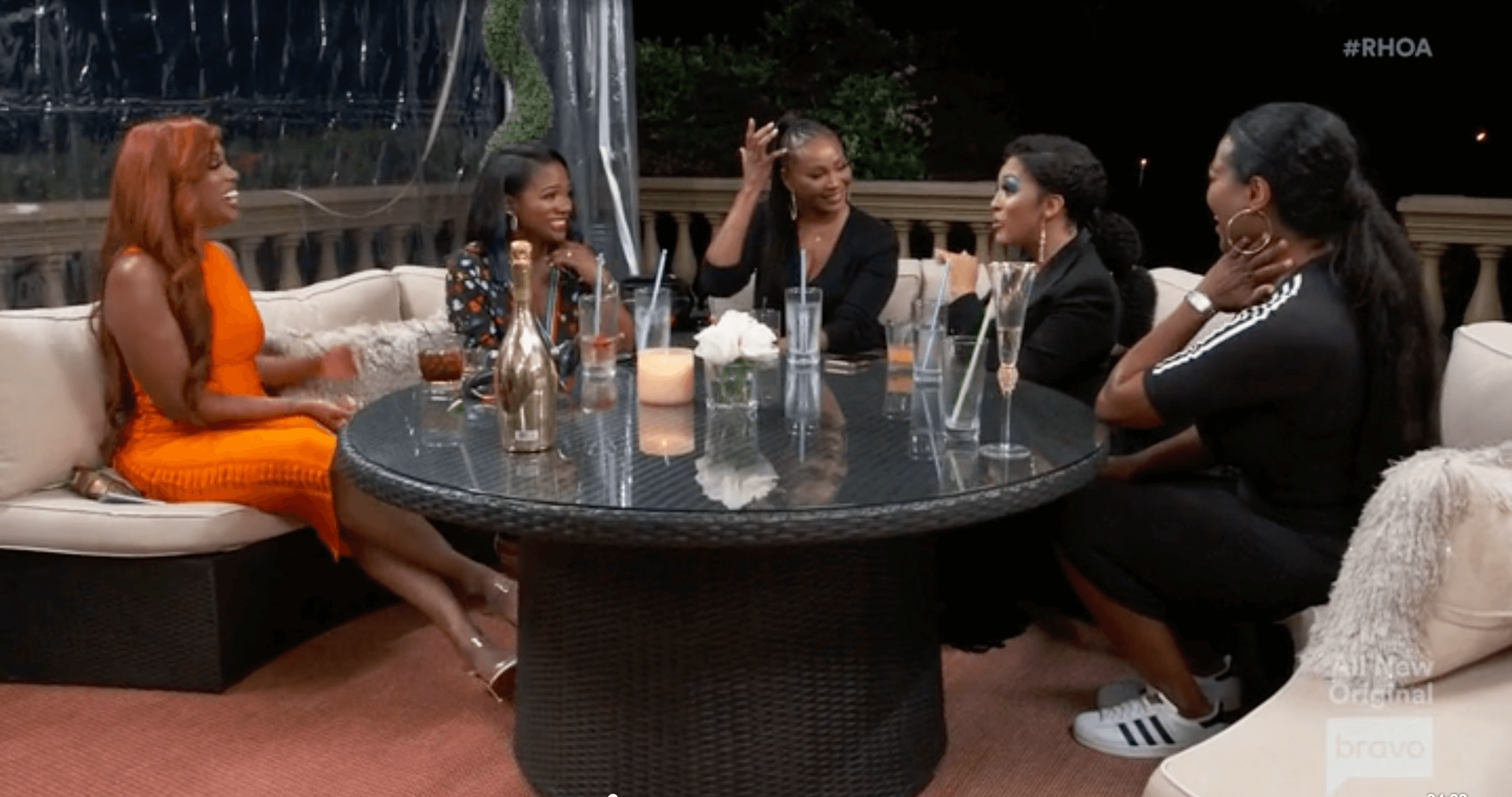 Kenya comes up next. Ralph escorts her to the porch with the other women. Then Porsha bursts in, wearing a bright orange dress.

Ralph delivers glasses of water to the women, They’re all impressed with his mighty muscles.

When Sidora wonders where LaToya is, Porsha tells her to be glad the other woman didn’t show up. LaToya has been coming for Sidora and her hair. This is news to Sidora. But LaToya has been shading Sidora’s wig to anyone who will listen. That was Sidora’s quarantine wig, people. Stop the hate! And besides that, LaToya only met Sidora once, so what’s her problem?

Porsha spills it all. She says Cynthia and Kandi were there to hear the shade, too. Porsha doesn’t understand why someone didn’t pull Sidora aside and tell her to fix her wig. That’s just common courtesy, right?

Sidora then turns to Kenya and says, “Kenya came and what she came with, and I think she’s rocking it real. I mean, we do the best we can.” Kenya doesn’t appreciate that, though she laughs it off in Sidora’s presence.

The women go inside for dinner. Sidora tells them Pastor Jeanette, her mom, is in her room writing her sermon. Sidora sings worship for the zoom church, and Ralph plays piano. The other women urge her to sing something. She breaks out Amazing Grace, then we see a flashback of Porsha singing it at a reunion a few seasons ago. 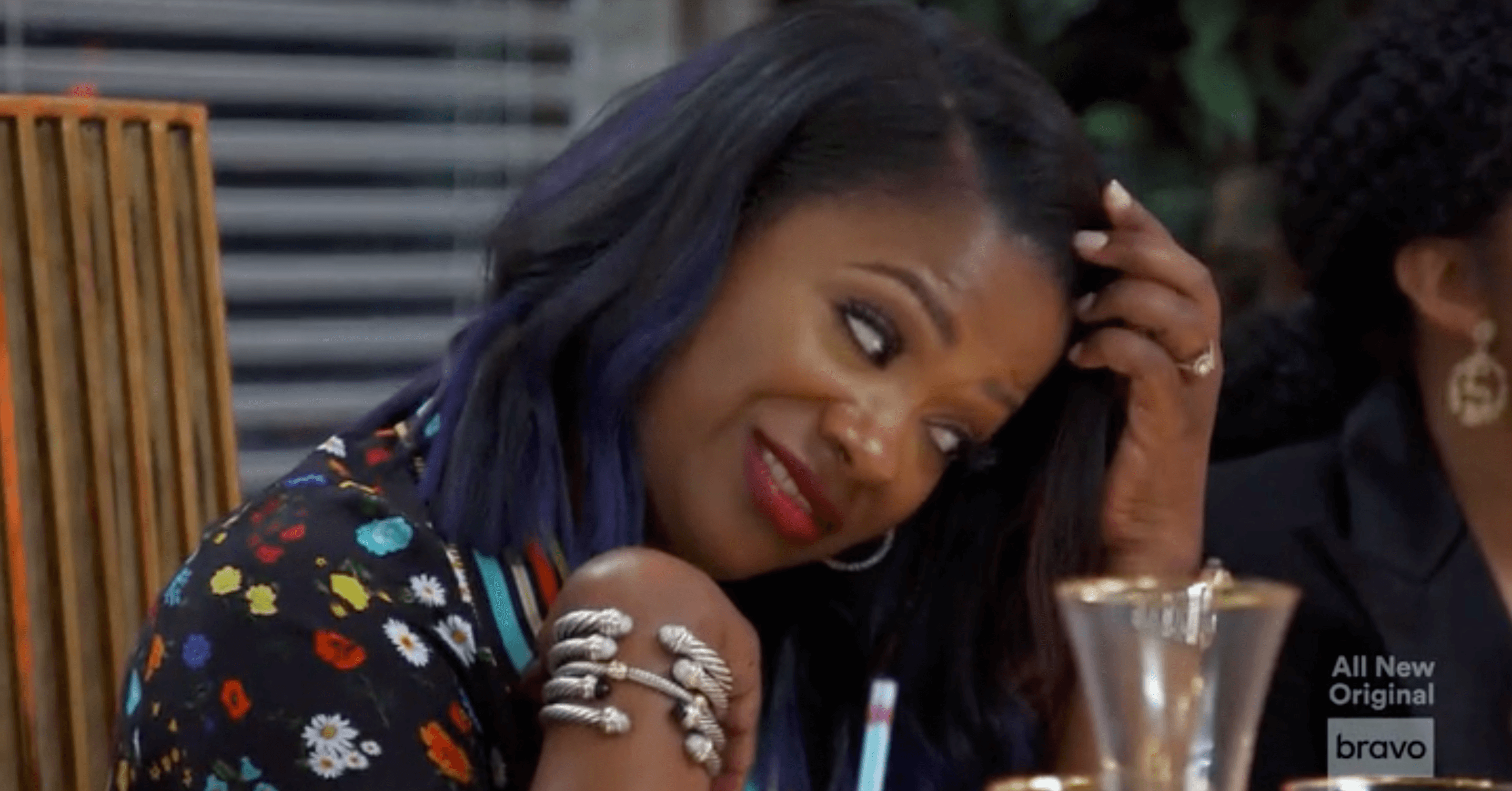 Sidora wants to put out some music. And with no segue whatsoever, she says she and Ralph have been having marital issues, but since he’s in earshot, she doesn’t go into details. When Kenya tells the women the time they need to be at Kandi’s house for their trip, Sidora asks how Kenya and LaToya plan to get to South Carolina, knowing full well Kenya has planned to take a private jet. Kenya even texted Sidora, telling her to stay mum on the jet situation. Sidora said she would keep her mouth shut, but she lied.

Kandi and Porsha aren’t impressed with the news. Even Cynthia seems a little pissed, even though she’s not traveling with the other women. She’s going to be a little late due to a business obligation.

The ladies leave Sidora’s house with gourmet popcorn. Ralph and Sidora hug everyone goodbye. But by the end of the night, Sidora has made an enemy out of Kenya.

We get our usual packing montage. Cynthia tells daughter, Noelle, she’s leaving for a few days. Noelle hopes it goes well, but she won’t be holding her breath. Drew tries on different outfits for Ralph. Porsha talks to her mom, who will fill in looking after PJ when Dennis is busy. And Todd tells Kandi she’s looking thick. But in a good way.

Todd was on hand when Mike Hill was fitted for his tuxedo. Todd will be MC for the bachelor’s party. Which reminds Kandi that she needs to plan something for Cynthia. So, of course, that will involve male strippers. 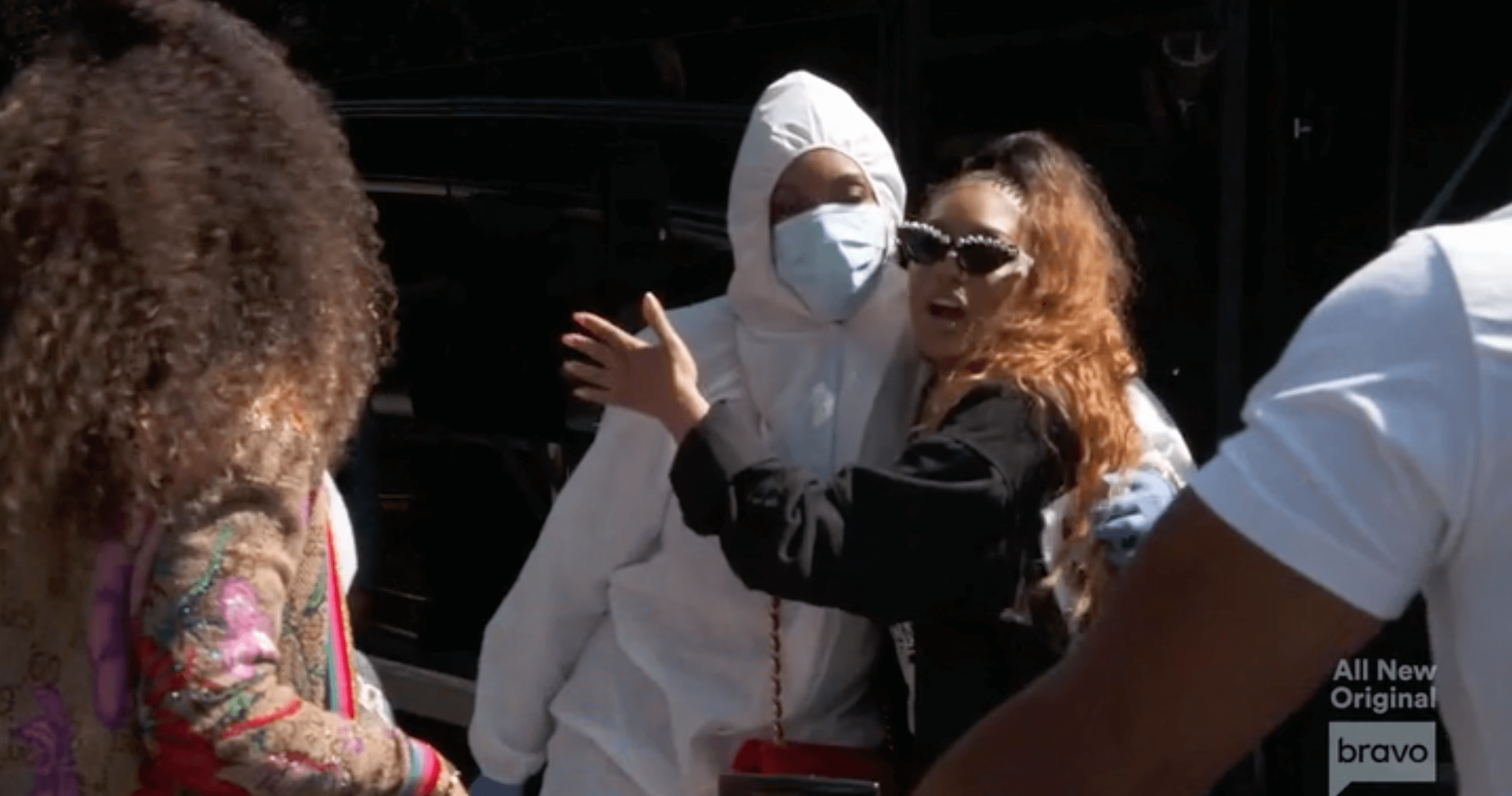 Time for the trip! Kenya has the limo driver shove her luggage in the back and wishes she had a reliable husband who could look after Brooklyn for a few days. When LaToya arrives, she has four suitcases, but only two hands. So, two of her suitcases slide down in the ditch. She has to chase them.

Kenya asks LaToya what kind of shit she’s been talking about Sidora. Kenya says Porsha was spilling all kinds of tea, and she just doesn’t have time for it. LaToya agrees. They’re too busy gloating over their private plane.

Porsha shows up at Kandi’s house, as Kandi is soaking up the last, precious minutes with Blaze. Porsha cried when she left PJ behind. Both women will miss their babies.

Dennis drove Porsha to Kandi’s house, which makes Kandi think they’ll be getting back together soon. On top of that, Shamea and Porsha are on time for once. Which is a call for a group hug.

Tanya shows up, then Sidora. And Marlo arrives in a hazmat suit and gloves. She’s Covid cautious.

On the bus, Marlo hands out Clorox wipes and everyone wipes down their seats. But once the seats are disinfected, Marlo whips off her white jumpsuit to reveal a black tank top. 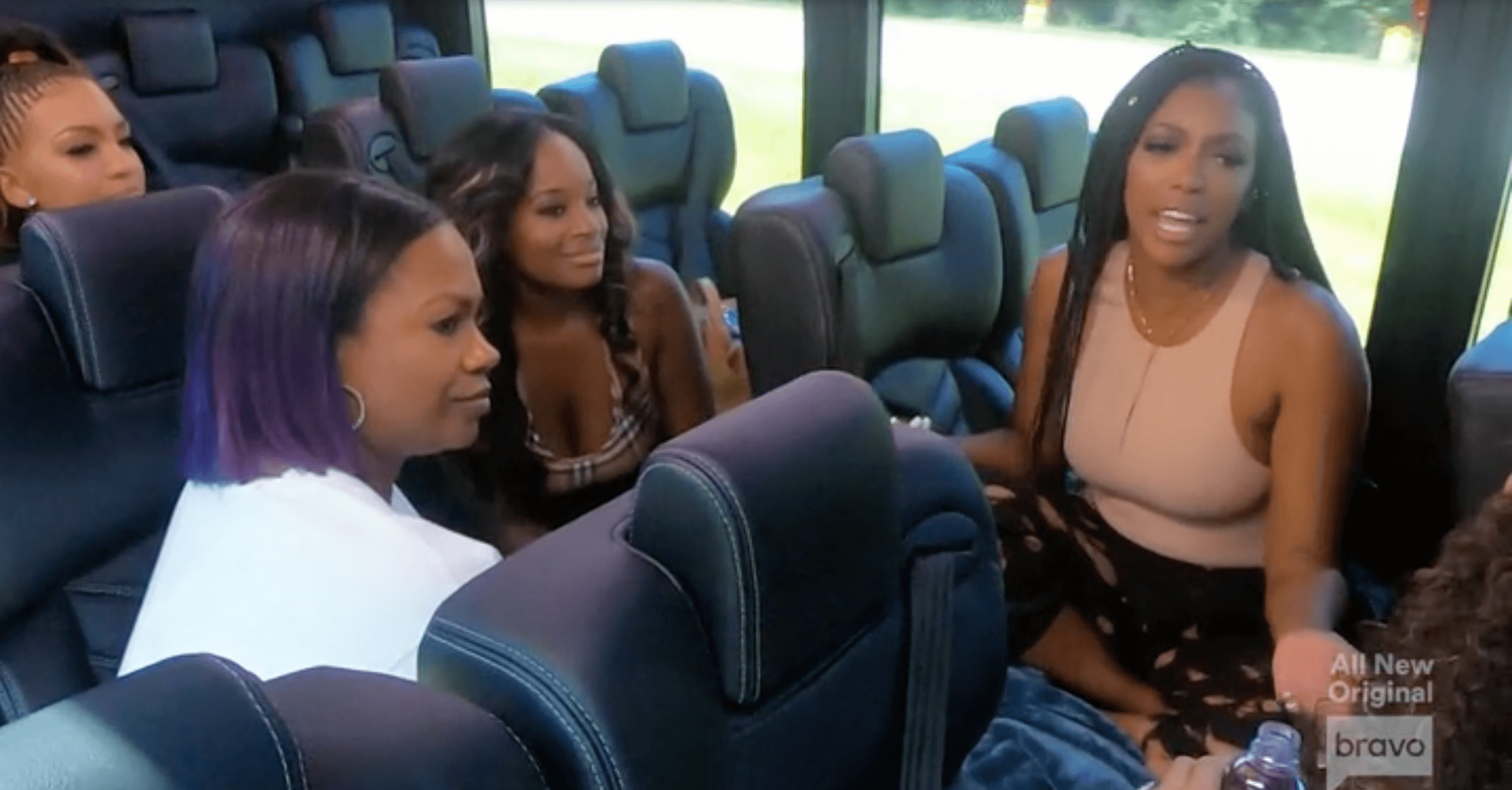 Once they’re on the road, Kandi asks Porsha about her status with Dennis. They’ve had dinner and stuff. She wants to be comfortable with him, so they can co-parent. She says Dennis has finally come to the realization that he screwed up, and sometimes saying sorry isn’t enough. Porsha admits to punishing him for his affair, and he was angry that she didn’t get over it immediately. Now he realizes she needs time.

She doesn’t see them getting back together. She hopes to be friends so they can co-parent, nothing more. He even stayed at her place the night before. On the couch! There was no sex. No touching of any kind. Uh-huh.

Kenya and LaToya touch down in South Carolina. Kenya twirls on the tarmac. Yawn.

On the sprinter, Marlo asks if the ladies have had threesomes. Sidora has not. Tanya refuses to answer the question, which kind of answers the question. Kandi makes her third wheels sign an NDA. Not sure if she was joking or not, but she said it twice, so…

In SC, the house is huge and beautiful, right on the water. Brooklyn and the nanny have a private villa, but the baby will be spending the night with Kenya. 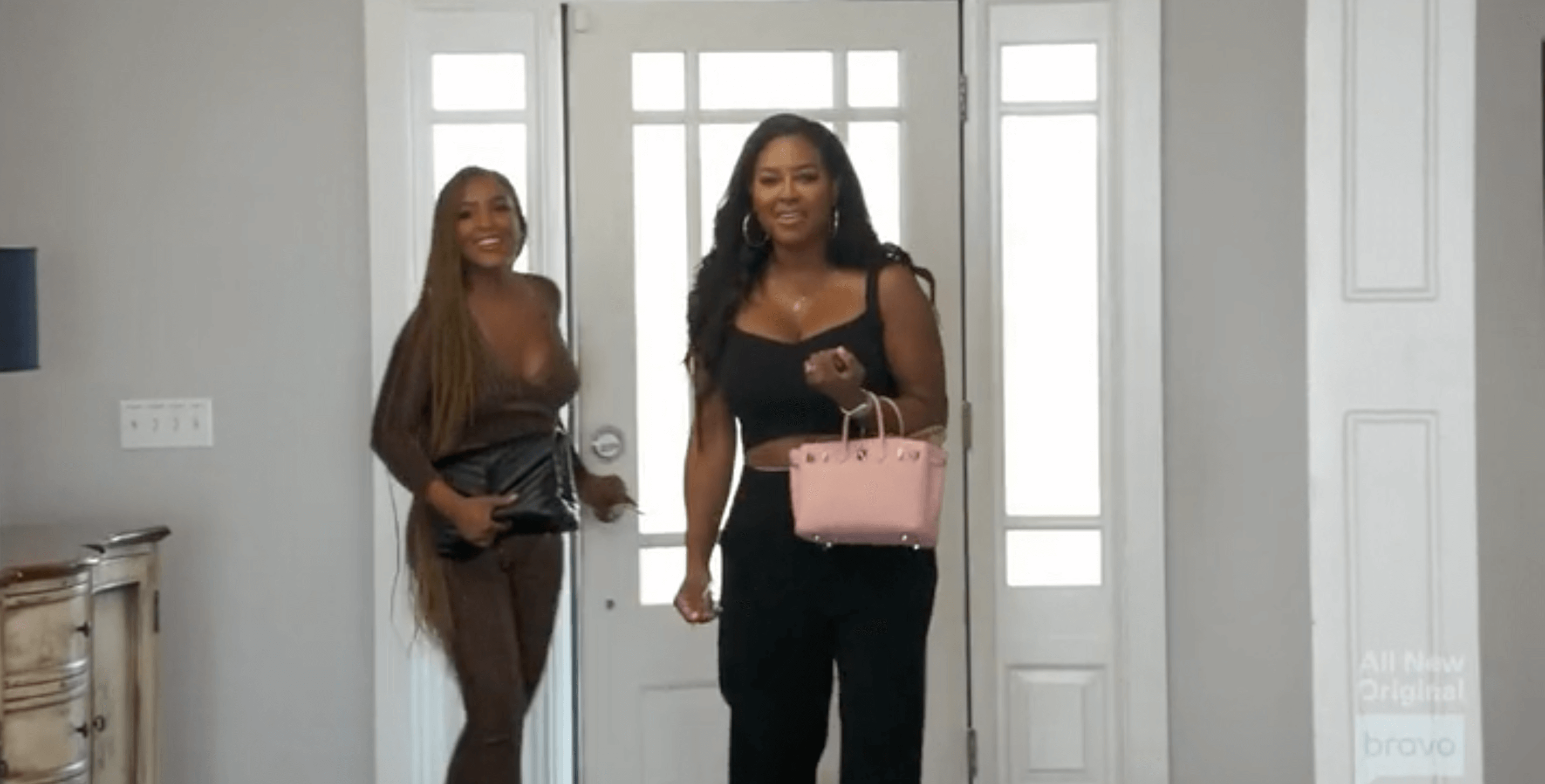 Kenya and LaToya assign rooms, taking the best ones for themselves. Kenya gives Marlo the worst room. Cynthia gets an ocean view. Kenya and LaToya take the two upstairs bedrooms. Bravo even gives us a diagram of room assignments, making me think this might be important later.

Back in the sprinter, which is hotter than the third circle of hell, Porsha brings up the private jet issue. Sidora tells the women Kenya tried to keep it a secret. The ladies are not happy with the situation. And when Porsha and Kandi realize Kenya brought her daughter, they’re doubly peeved.

And that’s our episode. So, do you think Kenya should have ridden with the girls? And why is LaToya coming so hard for Sidora?