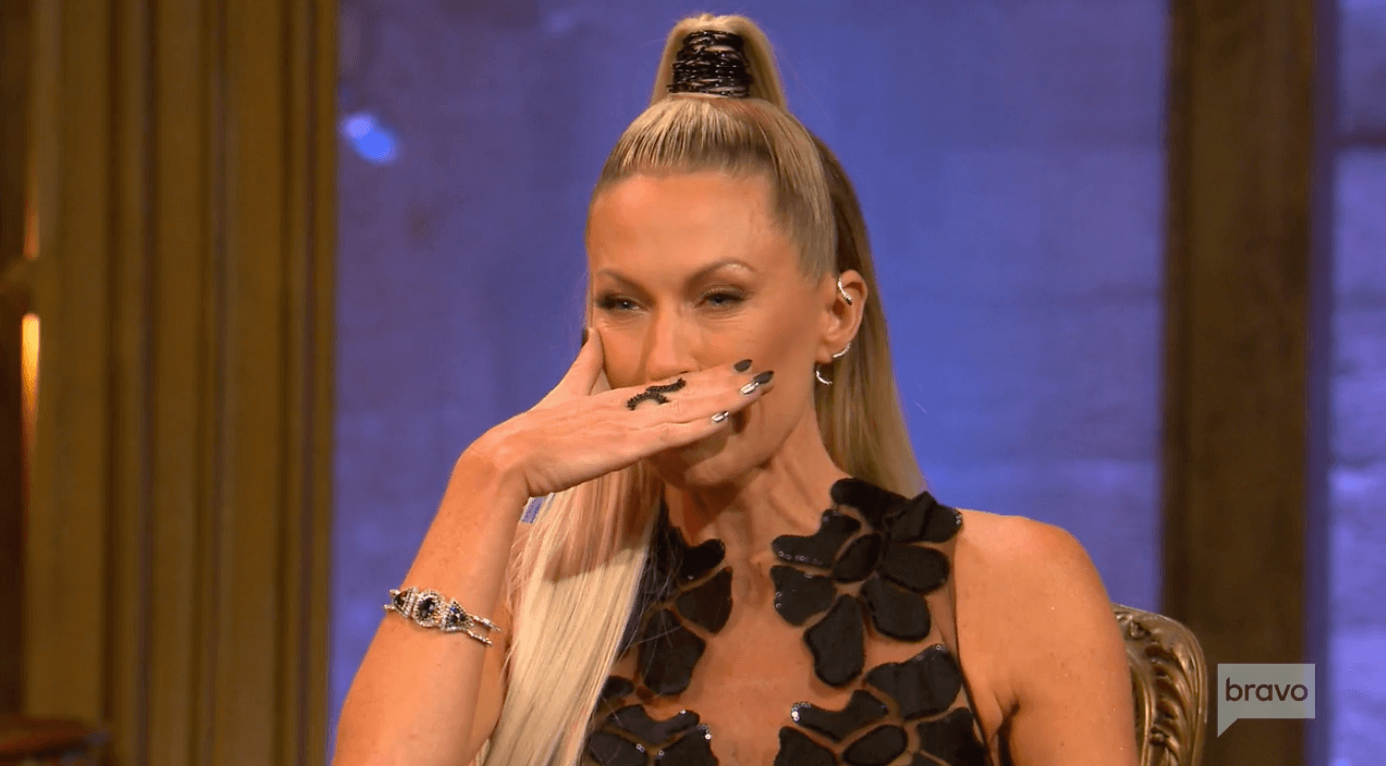 Welp, it’s another distanced reunion, this time for the Real Housewives of Orange County. It looks like the women are finally going to call Braunwyn Windham-Burke on her bullshit. And it’s about damned time. Oh, and there will be tears. Lots and lots of tears.

We see the initial issues between Braunwyn and Gina, and how they turned it around. Gina wound up becoming Braunwyn’s biggest support over the season.

Braunwyn blamed Shannon for her views on Gina’s “small and depressing” townhouse. But Gina loves her little home.

Shannon isn’t letting Braunwyn get by with it. Kelly and Shannon both tell Gina exactly how it was. Braunwyn complained endlessly about Gina being on the show. Braunwyn tried to yell over both women, but Emily jumps in and says Kelly’s not a liar. Um…so, that means Shannon is?

Emily, who admits she grew up poor, takes on Braunwyn. How dare she slam Gina for having a small house and not as much money as the rest of the women? Elizabeth, who also grew up in deep poverty, agrees. Braunwyn finally offers an apology, saying she thinks Gina is strong and powerful as a woman. Gina isn’t buying it, though, because she sees how Braunwyn qualifies women—by their money, material items, and status.

Shannon again says that she never called Gina’s house “sad or depressing.” Braunwyn tries to pacify Shannon. “I understand this is a big deal for you,” she says. Shannon isn’t having it. She will not allow Braunwyn to continue the lie. Gina believes Shannon.

Though Gina and Braunwyn aren’t besties—Gina texted Braunwyn after the show and said she still thinks Braunwyn is an asshole—however, Gina continues to pledge her support. And Braunwyn is grateful. That tells you how horrible Braunwyn’s season has been. Gina, however, feels her friendship with Braunwyn is too one-sided. It’s all about Braunwyn, all the time.

Next, Andy discusses Shannon’s relationship with John. She hasn’t introduced him to her ex, David, because he won’t talk to her, not even about co-parenting.

Andy wonders if Shannon’s drinking is a problem. Gina thinks Shannon drinks and then calls to complain about her relationship. But the next day, Shannon claims everything is great! Wonderful. Nothing wrong here, just move along.

Braunwyn spread rumors that John was an alcoholic. Shannon resents Braunwyn for spreading lies. It’s not helping John’s reputation as a businessman, that’s for sure.

Braunwyn thinks Shannon has an alcohol problem, too. Shannon denies it.

Backstage, we see Shannon talking to John on the phone. She says Braunwyn keeps bringing up the issues that concerned them—i.e. their drinking. She accuses Brauwyn of strutting around the stage like she’s in a music video, and that she’s completely naked under her dress. (I’m betting Shannon has on her three pairs of Spanx.) John accuses Braunwyn of being a dry drunk.

Andy talks about the Covid crisis. As Emily watches footage of Shane being so sick from Covid, she breathes deeply and tears well up in her eyes.

Kelly isn’t exactly a Covid denier, but she’s not loving the masks. (And then she starts coughing!) Kelly wears masks, but she’s not sure they help. And she regrets her comments on social media. Kelly says that she may have her share of haters, but her fanbase is growing.

She wants businesses to open. That “thinning the herd comment”, she admits, was a stupid statement, but she didn’t mean to hurt people. She admits she feels like shit, and Andy’s making her feel worse. She tears up as he questions her.

While Emily’s husband, Shane, was in the hospital, she wouldn’t hear from him for twelve hours at a time. She feared he might be dead. Though she tried to stay upbeat and positive for her kids, she wondered what she would do if he passed. He even sent a text to his oldest daughter, telling her goodbye. Shannon was very supportive of Emily during this time, calling and texting every day.

Elizabeth’s history was all over the place this season. The women weren’t sure what to believe, because she couldn’t keep her stories straight.

Even though she’s now divorced, Elizabeth is having a hard time with her relationship with Jimmy. He’s an introvert. She was tired of people questioning their sex life.

Andy wonders if Elizabeth still loves her ex-husband. She might. She’s just not sure how she feels, but he changed her life, and she’s grateful.

Braunwyn claims to know a friend of Elizabeth’s ex and his fiancée. Elizabeth denies that her ex is engaged. If he were, she’d know. They’re still friends. The women all jump on Braunwyn, saying they’re tired of her latching onto rumors and spreading them like honey on a hot biscuit.

Elizabeth tells Braunwyn she’s mean. But Braunwyn maintains that Elizabeth lied to her. Elizabeth says she didn’t lie, she just didn’t explain the whole story, and she’s tired of Brauwnyn judging her. She calls Braunwyn a narcissist, cynical, and two-faced. Oh, and a backstabbing bitch.

Braunwyn blames Shannon as the reason why she looked into Elizabeth’s background. Braunwyn then claims that one of her girlfriends had already done a title search on Elizabeth’s house. That got the ball rolling. (Isn’t it amazing how Braunwyn never takes responsibility for anything?)

Shannon is bursting to speak by this point, so Andy makes everyone shut up. Shannon admits she was confused by Elizabeth’s timeline, but Elizabeth is more upset at Braunwyn. She says Braunwyn tears women down, instead of building them up.

The women all talk over each other until Andy yells at them to pipe down.

Then we finally got to Braunwyn’s sober storyline. (Yawn!) Brauwnyn grins proudly as she watches her video package.

Braunwyn says that being publicly sober has held her accountable. Emily wonders how Braunwyn could transition from drinking to not drinking during her pregnancies and breast feeding. Brauwnyn says sobriety and not drinking are two different things.

Elizabeth asks what kind of “sober” Braunwyn is now. Brauwnyn shuts her down, saying she doesn’t need to explain alcoholism. If Elizabeth wants to know more, she can Google it. No, ma’am. I’m not here for your defensiveness. For weeks we’ve had to put up with this overbearing storyline, now you’re refusing to answer a simple question? I do not approve!

Braunwyn says it’s not as cut and dried as getting pregnant so she wouldn’t drink. She’d been to rehab in Miami. She was sober and feeling great when they got pregnant with the twins. But she didn’t want to deal with her reasons for drinking. Kelly comments on how sad that is for Braunwyn’s kids.

Braunwyn continues by saying that she’s also an addict. Whether it’s shopping or social media. But Kelly isn’t buying it. She thinks Braunwyn’s alcohol storyline is just that. Brauwnyn says she was drinking at seven in the morning. Yeah, Kelly says. Been there, done that. Doesn’t make one an alcoholic. Furthermore, Kelly worked out with Braunwyn many times early in the morning, and the other woman was stone cold sober. Kelly calls Braunwyn a liar. Braunwyn, in turn, thinks Kelly is vile.

Kelly says Braunwyn’s agent told her to get sober. Gina chimes in that Braunwyn’s mom, the colorful and passive-aggressive, Dr. Deb, also suggest that her daughter to sober up.

Braunwyn assures Andy that her relationship with Dr. Deb is just fine now. Elizabeth points out that Dr. Deb is thirsty, just like her daughter. Kelly thinks this is where Braunwyn gets her narcissism. Shannon even blocked Dr. Deb from Insta.

Even Andy says Brauwnyn shares narcissism with her mom. Braunwyn denies the accusation. She says she was tested for it and she is not a narcissist, but she does have a very large ego. Kelly openly laughs upon hearing this. But Andy pursues this line of questioning. “You don’t seem like you’re not a narcissist.”

Shannon says Brauwnyn’s only criteria in life is how to make herself more famous. The other women heartily agree. Shannon claims that Braunwyn and Sean admitted their favorite pastime is to go out and get recognized by the public. #ThirstBomb

Andy says it was nice of Gina to be Brauwyn’s sober buddy. Gina, after attending meetings with Brauwnyn, thinks the other woman is an alcoholic. But, Gina admits, people in her life question the reality of Brauwnyn’s sobriety.

And that’s it. They’re leaving us on quite a teaser.

So, do you think Brauwnyn should come back for another season? Do we believe that she’s really an alcoholic or is it just a storyline? And aren’t all these women narcissists to some degree?