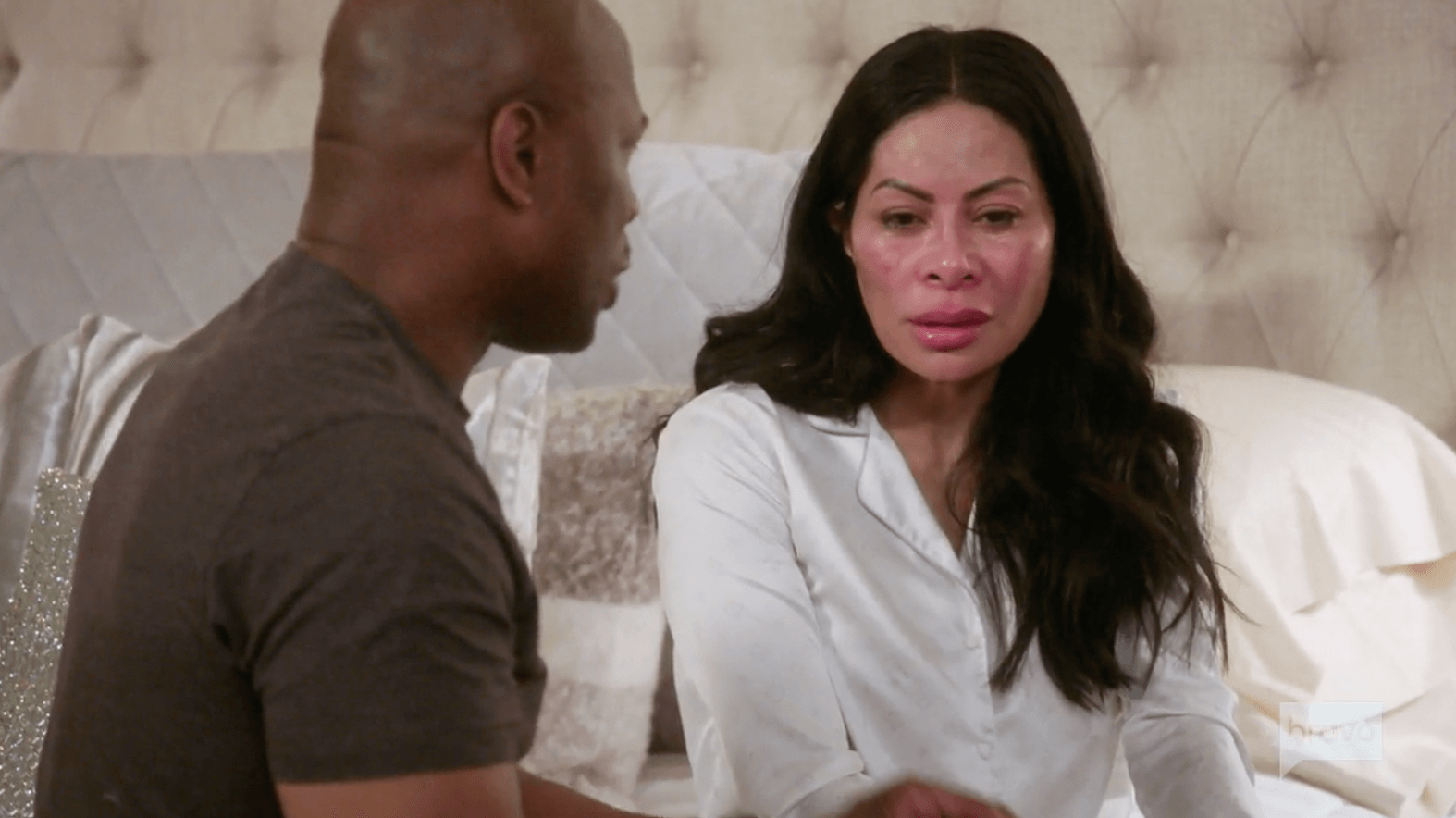 We begin this week’s episode of the Real Housewives of Salt Lake City in Meredith Marks’ bedroom. Husband, Seth, brings her coffee in bed, along with a rose. They share a passionate kiss, signaling they’re back together. In a gag-worthy moment, Seth tells her that the rose is blooming, like their renewed love.

At the Beauty Lab, Heather Gay is fully booked. At Lisa Barlow’s house, her son, Henry, uses sage to sweep away the bad vibes.

And at Jen Shah’s chalet, she’s trying to come to terms with the disastrous surprise birthday party for her husband, the coach, going south the night before. Whitney Rose told Jen that Lisa and Meredith are scared of Jen. The women denied it, but Jen blew up and stormed out of the venue. She’s now embarrassed for letting her anger get the better of her. On top of that, Sharrieff isn’t speaking to her.

Whitney goes to the Beauty Lab to discuss the party with Heather. They agree that Whitney did nothing wrong. She was simply trying to warn Jen that the other women feel some kind of way about her. But Heather knew Jen would blow up. There was no way around that, due to Jen’s volatile nature. She is just sad it spilled over onto Whitney instead of Meredith and Lisa.

Heather is upset that Jen is doubling down on her friendships with the two women. Heather says those two are false friends. She and Whitney tried to have Jen’s back, but it blew up in their faces.

Whitney wants Heather to talk to Jen. And she wants Jen to take accountability for her angry reaction. Heather says that’s never going to happen.

Meredith and Seth are back on track. She says she needs Seth in her life. They have to continue to work through “the noise” and “stay on the same journey” …and all those other buzz words I find so annoying. Then she tells Seth the scuttlebutt about the party.

Whitney also told Meredith that Jen’s been talking shit about Meredith’s marriage behind her back. This just makes Meredith want to stay far away from Whitney. Doesn’t Whitney know the messenger always gets shot in these scenarios?

At Lisa’s, she relays the events from the party to her husband, John. She complains about Whitney’s hip hop dancing. How dare Whitney twerk in front of Sharrieff? And furthermore, she’s not afraid of Jen.

Jen discusses Whitney’s behavior with her second assistant. Sharrieff is embarrassed by Jen’s behavior. He’s not taking her calls, and he hasn’t been home in days.

At Mary’s place, she’s trying on clothes for her maid/cousin. Mary’s clothes are taking over the office, her bedroom, Robert’s office. She thinks she might need an apartment for her wardrobe.

Whitney calls Mary and tells her the scoop. Mary disagrees with Whitney using Sharrieff’s party to talk to Jen. It was the wrong place and the wrong time. Whitney asks for confirmation that Lisa and Meredith both told her they were afraid of Jen, and Mary confirms it. She encourages Whitney to call Jen and tell the other woman how she feels. Which is a terrible idea! Jen doesn’t care how anyone feels. Hasn’t Whitney figured that out yet?

Heather checks out her new Beauty Lab space. It’s a huge building and represents her success. She could never have had this career if she were still married to her ex, Billy. Her role as his wife was to support him and raise their children. Nothing else. Now, it’s time for her to start taking a salary. She wants to be independent from her ex and have her own money.

Seth and Meredith meet up with Lisa and John for dinner. They’re packing on the PDA as they wait for the other couple to arrive.

After they order, Meredith shares that she and Seth are back together. Lisa’s excited to hear the news. She’s been a good support system for Meredith.

Meredith brings up the party. Lisa thinks Whitney is immature. But Meredith is more concerned that Jen might be spilling tea about Meredith’s marriage. Seth and John look on with smirks as if to say, “Oh, these women and their silly drama.”

It’s a new day. Whitney and Heather plan to meet Jen at a spa. Whitney called and apologized to Jen a few days prior, and hopefully getting in a hot tub will mellow Jen out. The “spa” is out in the middle of nowhere and dotted with ancient wood buildings that look like they could collapse with a strong wind. Oh, and there’s a peacock strutting on the roof of one of the shacks, next to the rusted school bus.

Jen isn’t impressed with the low venue. Is this how Whitney apologizes?

The women tromp outside, up the side of a steep hill, darting past tumbleweeds, and into a bathtub filled with natural spring water. Whitney apologizes again, saying she wanted to be honest with Jen and let her know the other women have been talking about her behind her back. But this party was such a big deal for Jen, she blames Whitney for the way it turned out.

Whitney takes no responsibility. If Lisa and Meredith had stayed out of the conversation, it wouldn’t have gone left. And by the way, Whitney’s not the one who threw a glass. That was all Jen. Jen claims Whitney pushed her into throwing the glass.

Jen is in tears as she describes how important the party was to her. And Whitney ruined it by bringing the gossip. Whitney won’t admit she was wrong. Heather thinks Jen has a part in this, too. She got angry, she threw the glass, and she blew up when she could have restrained herself.

Jen says Sharrieff hasn’t been home since the night of the party. She blames Whitney.

Jen screams at Whitney, then she angrily splashes water out of the tub and onto the camera. The producer chides her for getting the camera wet, but that’s not Jen’s fault either. That’s what happens when they film her in a spring-fed bathtub.

Jen gets out of the tub and storms off, and Heather turns to Whitney. She asks Whitney to have some empathy for Jen, but Whitney is tired of Jen’s angry outbursts.

Jen comes back into the tub. She says she’s staying for Heather, but she’s over Whitney. Whitney apologizes again as Jen and Heather cry.

Jen says the women can always come to her and tell her anything. Um…no they can’t!

Heather admits she could have been softer with her approach, but either way, Jen didn’t believe them. Heather feels left out like Jen cares more about Lisa and Meredith than she does about Heather. She’s scared of losing her friendship with crazy Jen.

Heather has a hard time expressing herself. When she talks about her true feelings, people leave. Case in point, her husband left her because she didn’t want to change the time of her daughter’s baptism.

Whitney asks Jen to believe that she had no ill intent. She climbs in the tub with Jen and hugs her. Jen says she can accept Whitney’s apology, but she’s not over it. Her marriage is now in trouble, and she blames it all on Whitney, not her own bad behavior.

Lisa heads to a yurt for a three-course meal. She wants a tequila pairing with each course. Meredith made it on the guest list, but none of the other women were invited. Lisa has only invited women who are “powerhouses” and don’t throw cocktail glasses across the room. These people are more Meredith and Lisa’s style.

It’s nighttime and Sharrieff has come home. He’s finally ready to talk. Jen’s worried he might be ready to end the marriage.

She asks why he hasn’t been home for four days. He needed time to cool off. He loved the party, but when she drinks, she becomes angry. Jen admits she’s trying to numb her pain and depression. She’s upset over her dad’s death and her husband’s frequent absences.

She’s tried to support Sharrieff during his coaching career, but when she needed him, he had to work. She had to make all the medical decisions for her dad. Sharrieff wasn’t with her at all. He even missed his father-in-law’s funeral. He apologizes to Jen when he realizes how angry she’s been with him.

Sharrieff apologizes and promises to be better. Jen is upset that she’s disappointed her husband, but she’s glad she can be honest with him. She wants to change and not be as angry.

And that’s our episode. So, do you think Whitney was responsible for the blip in Jen’s marriage? Did Meredith and Lisa lie about being afraid of Jen? And could you even call that rusty bathtub a spa?