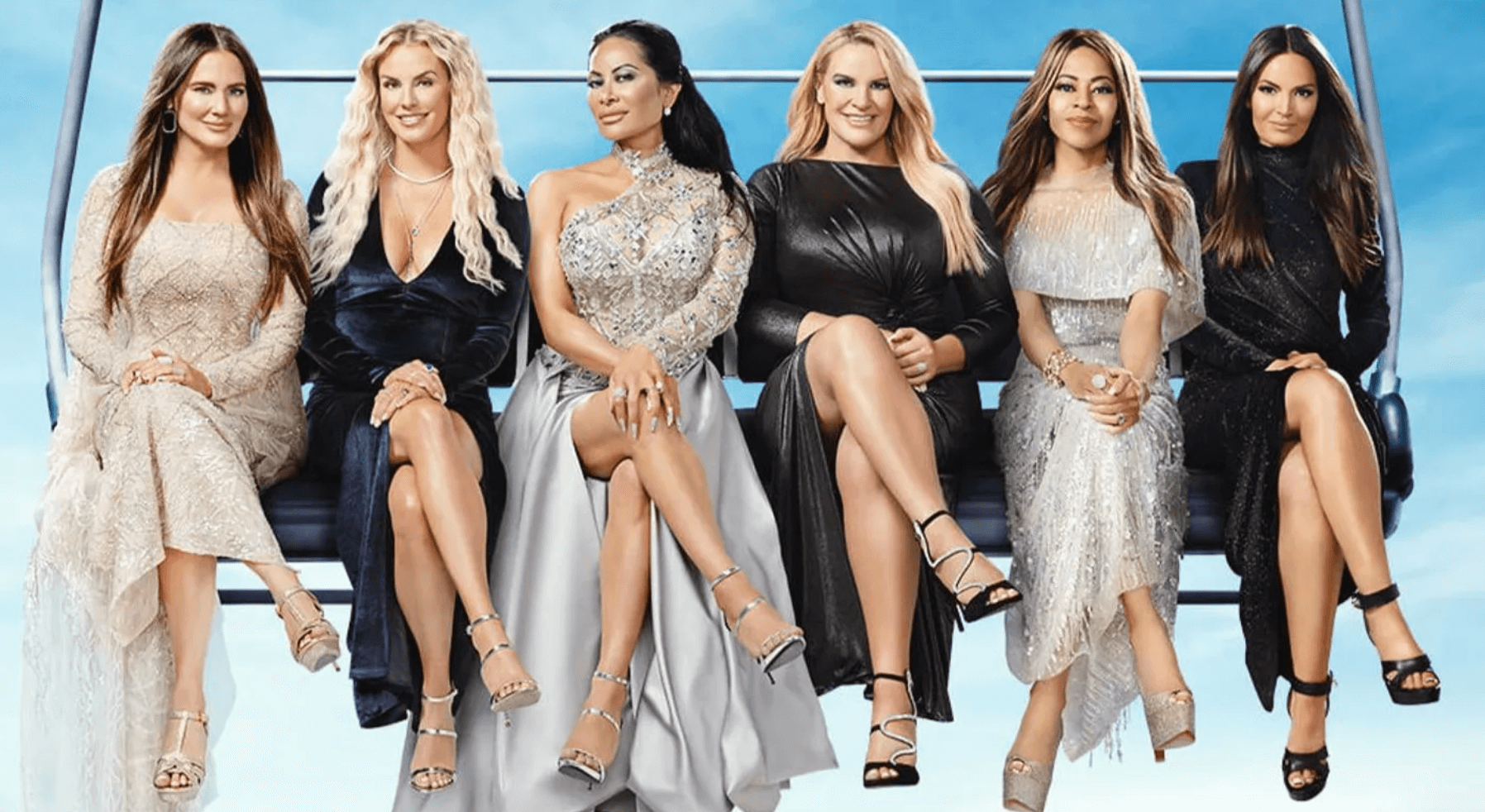 Jen Shah and Whitney Rose are sounding off, after one of their Real Housewives of Salt Lake City co-stars was spotted in the vicinity of the Capitol Hill chaos last week.

Photos circulated on various Bravo fan pages reveal that, Sara McArthur Pierce, mixing with several Trump supporters prior to the breach of the Capitol building. Sara was snapped smiling with a group of people, wearing a beanie printed with an American flag.

IG account, Real Reality Homo posted the pic, captioning the post, “If you watched #RHOSLC this week, you saw Sara, who made a cameo earlier in the season. Well, she was also in Washington DC this week taking part in the “peaceful protests” and insurrection. Shameful, really.” 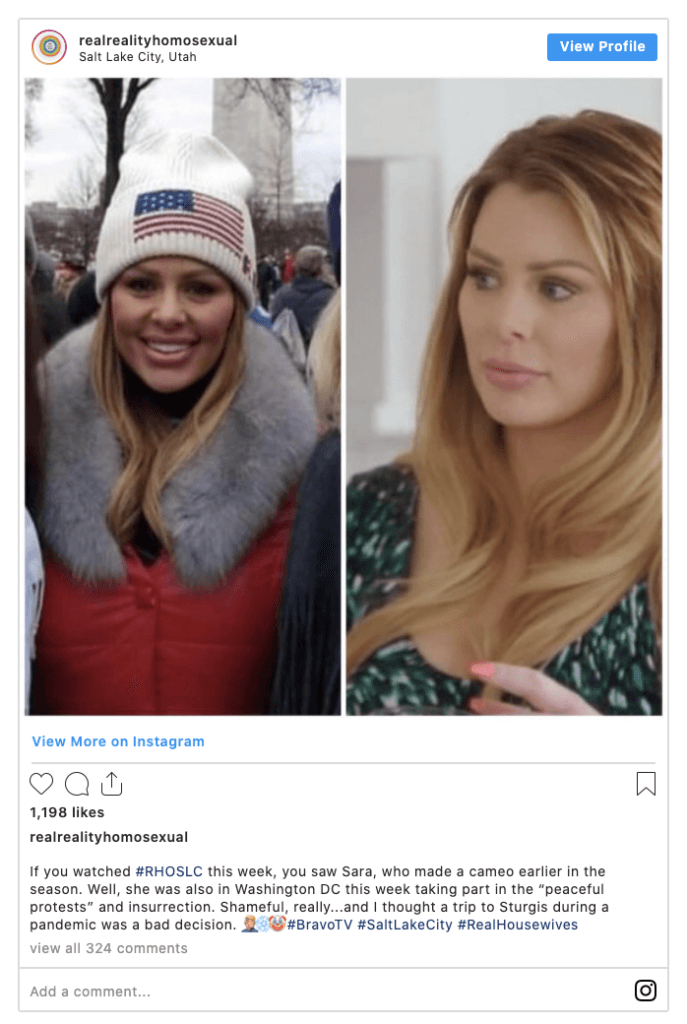 Sara, who isn’t a full-time cast member on the Bravo hit, was featured in a couple of scenes early in the season. Social media speculation points to a theory claiming that she was originally cast in a full-time role but was swiftly axed from the cast, due to her extreme conservative political views.

Some fans allege that Sara’s Instagram profile hinted that she believed in Qanon, a popular conspiracy theory circulating among Trump supporters. Reddit users dedicated an entire thread to discussing production’s alleged decision to cut Sara loose. While Sara’s Instagram profile is set to private, Facebook photos reveal photos of the reality personality wearing a hat decorated with a Q. Fans began circulating Sara’s photos from the rally, and caught Whitney Rose hitting her like button to affirm her pal’s posts.

The Bravo star was hit by fan backlash so she decided to set the record straight on Twitter.

“I am devastated by the events that took place at The Capitol Wednesday. I was not there and DO NOT agree with it. Humanity needs more love and understanding right now. Let’s stop the hate. #RHOSLC @BravoTV,” Whitney Rose wrote.

Jen Shah took note of the post on the social media fan page — band weighed in.

“ARE YOU FU-KING KIDDING ME?!?!? Wow. Well this answers a lot of questions,” she said.

Fan opinion was popping on Twitter — with some dissing Whitney for liking her friend’s posts, and others expressing disapproval of a growing cancel culture. 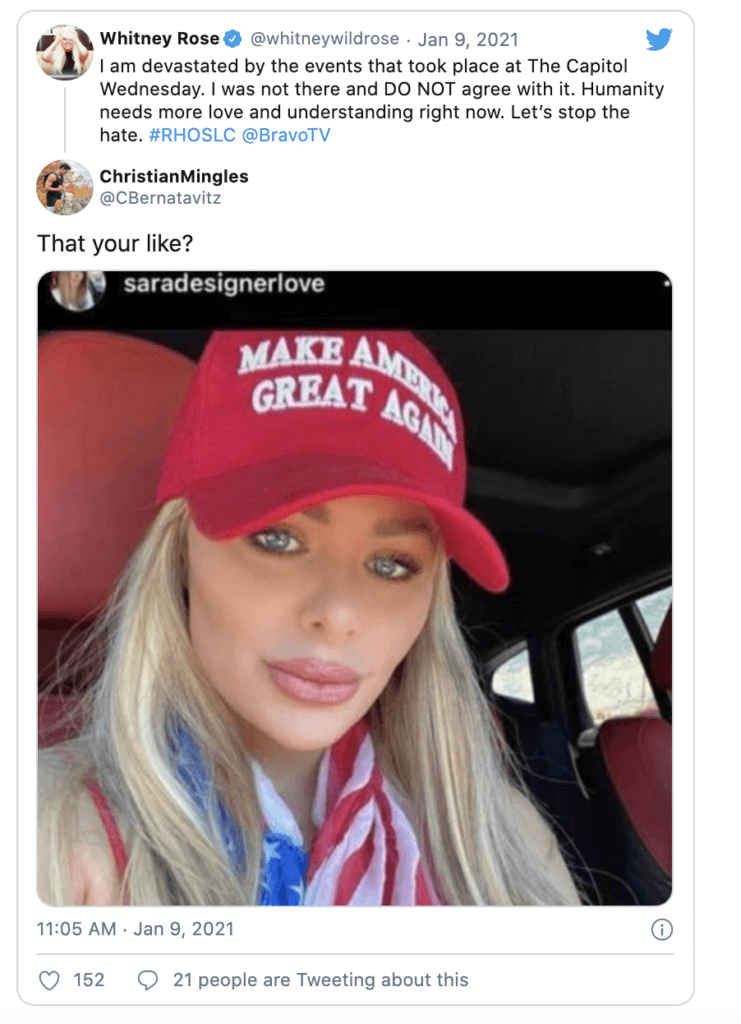 “This was from 4th July way before any of this happened. She could have liked it for a number of reasons. You can like someone and have difference views,” one fan wrote.

“Sooo she isn’t allowed to have friends that have political beliefs that may be different than hers?” another asked.

“Welp no longer your fan Whitney Rose. This is disgusting,” one viewer said.

“It’s crazy how terrible of a job @BravoTV

does of screening cast members for racism and fascism lol,” another added.

“Damnit @whitneywildrose I was loving your journey of sobriety with your dad, now all I see in you is this,” a disappointed fan wrote.

The Real Housewives of Salt Lake City  airs on Wednesdays at 10 pm, ET, on Bravo.