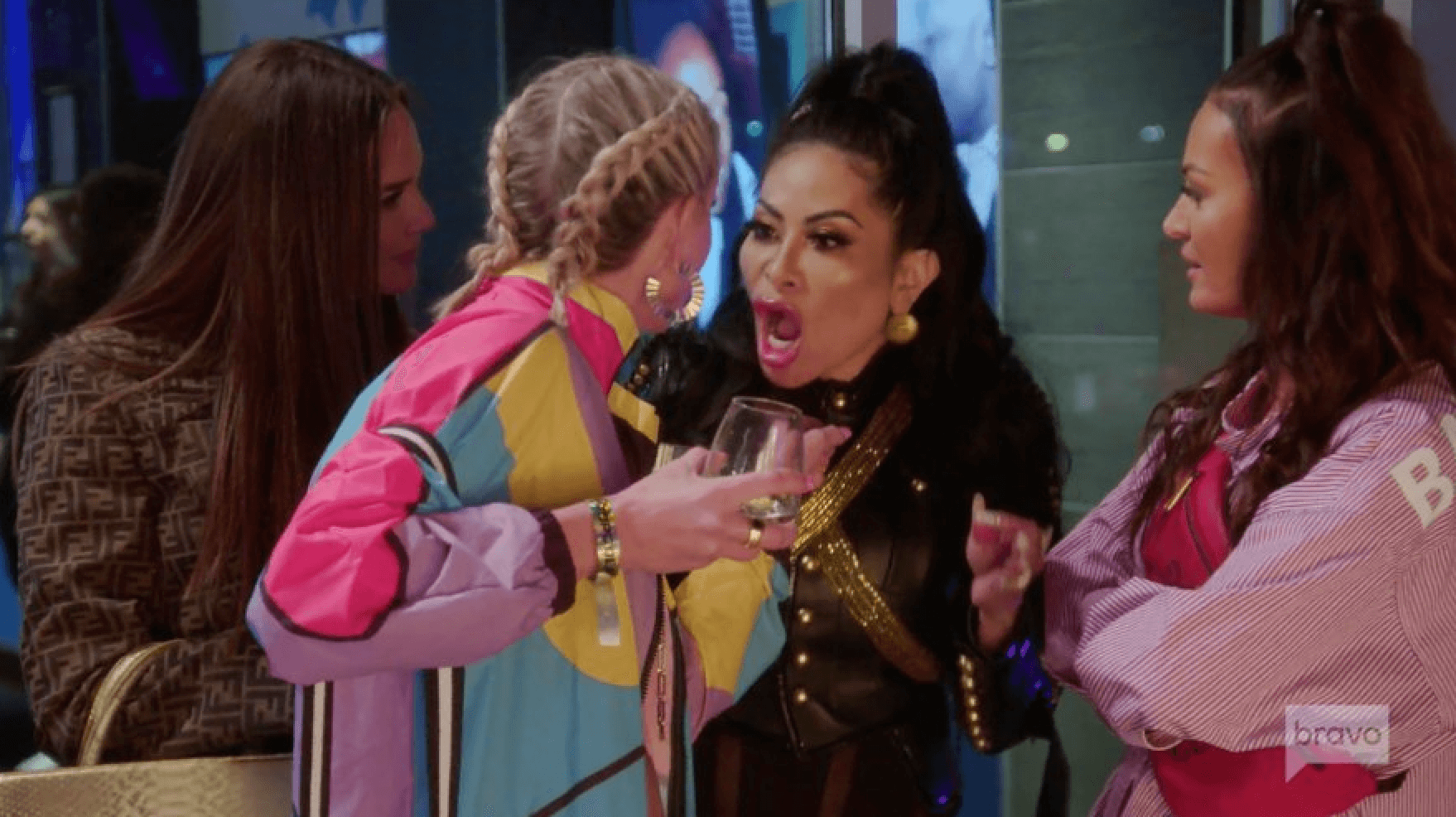 We open this episode of the Real Housewives of Salt Lake City with Meredith Marks taking a walk with her two kids. She tells them therapy has helped her broken marriage to husband, Seth. Son, Brooks, thinks it’s lame they have to go to therapy to learn how to communicate.

And in Jen Shah’s chalet, she’s planning a surprise birthday party for her husband, Sharrieff. She uses words like “shamazing” and “shabulous.” Her theme is hip hop golf.

Jen calls Whitney and asks her to the party. Whitney wonders if Mary Cosby will be invited. Nope. Jen is over Mary. But…won’t Mary feel left out? Jen doesn’t care about Mary’s emotional equilibrium. If she feels left out, who the hell cares? Not Jen Shah!

At Mary’s house, she’s telling her cousin/maid how to dust. Then she stops to facetime her husband/step-grandfather. (So many tangled relationships in this family!) To get away from Mary, Robert Sr. likes to trot around the country and check on their empty properties. She tells him that she’s sad she’s not invited to Jen’s latest party. When she begins to cry, Robert Sr. becomes distraught. He doesn’t want to see his wife/step-granddaughter upset. 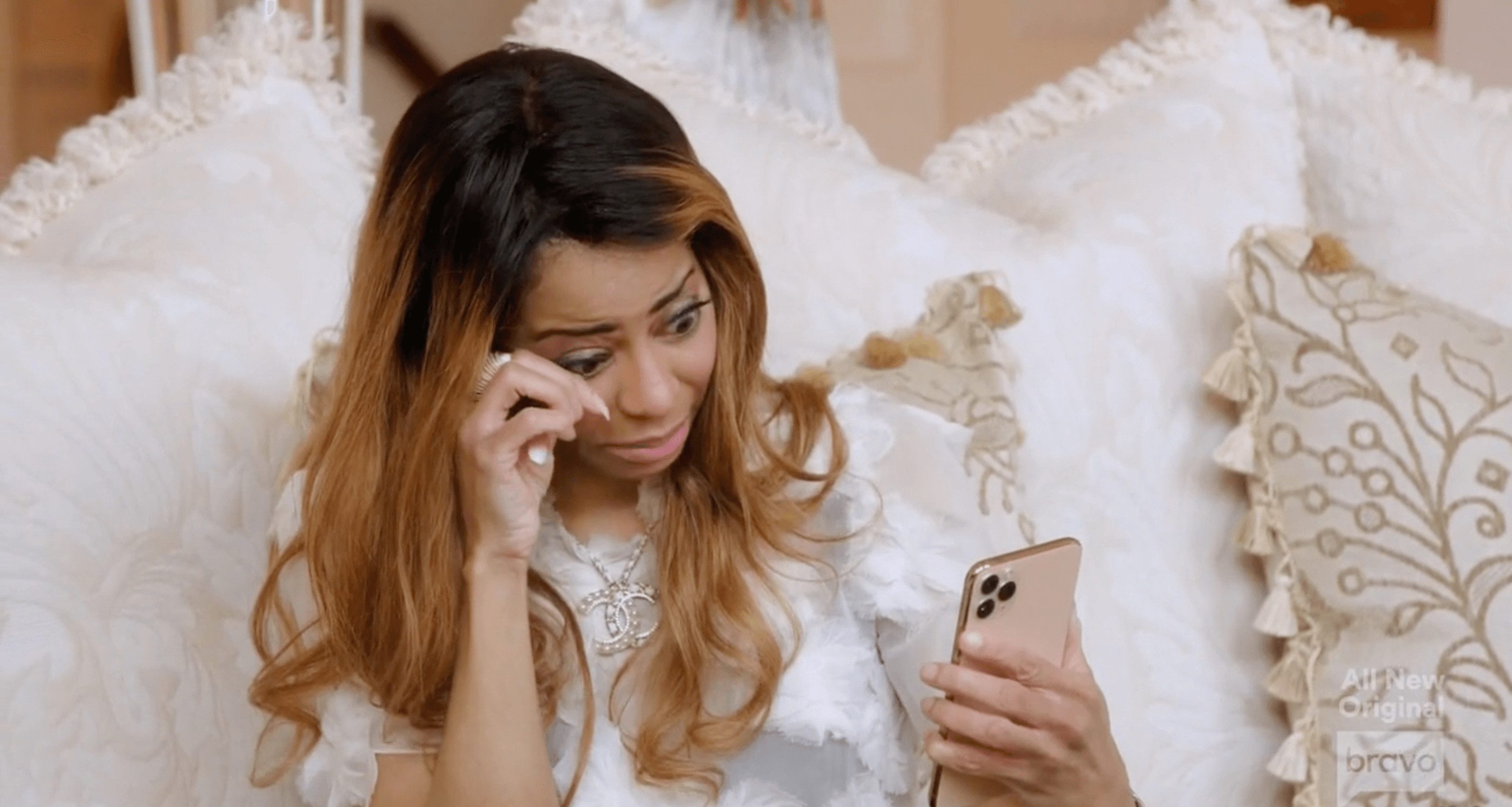 Mary believes the other women are scared of Jen. If they go against her, Jen will turn on them.

At Heather’s house, she and her girls don’t celebrate Valentine’s Day, they celebrate Galentine’s Day. The only penis allowed belongs to her ex-husband, Billy. Billy brings flowers and balloons for the girls.

Heather tells us that she and Billy became engaged after three months of dating. It wasn’t long enough to truly know one another. Once, they went to see Scary Movie III. When a glory hole was featured in one scene, Billy made them leave the theater. Heather thought it was funny, but Billy withheld sex from her until she saw the error of her ways. And when she didn’t want to change the time of her daughter’s baptism to accommodate his sister, he said she could have the ceremony whenever she liked, and he’d move out. He did, and they divorced soon after.

Heather wanted an eternal family. She did everything right, but she still ended up alone. And now she’s ostracized from her community.

Whitney stops by Mary’s house for a visit. Mary takes Whitney up to her room/closet. It’s kind of a disorganized mess. And since Mary won’t even let anyone into the house without donning paper booties, I was surprised to see the clutter. 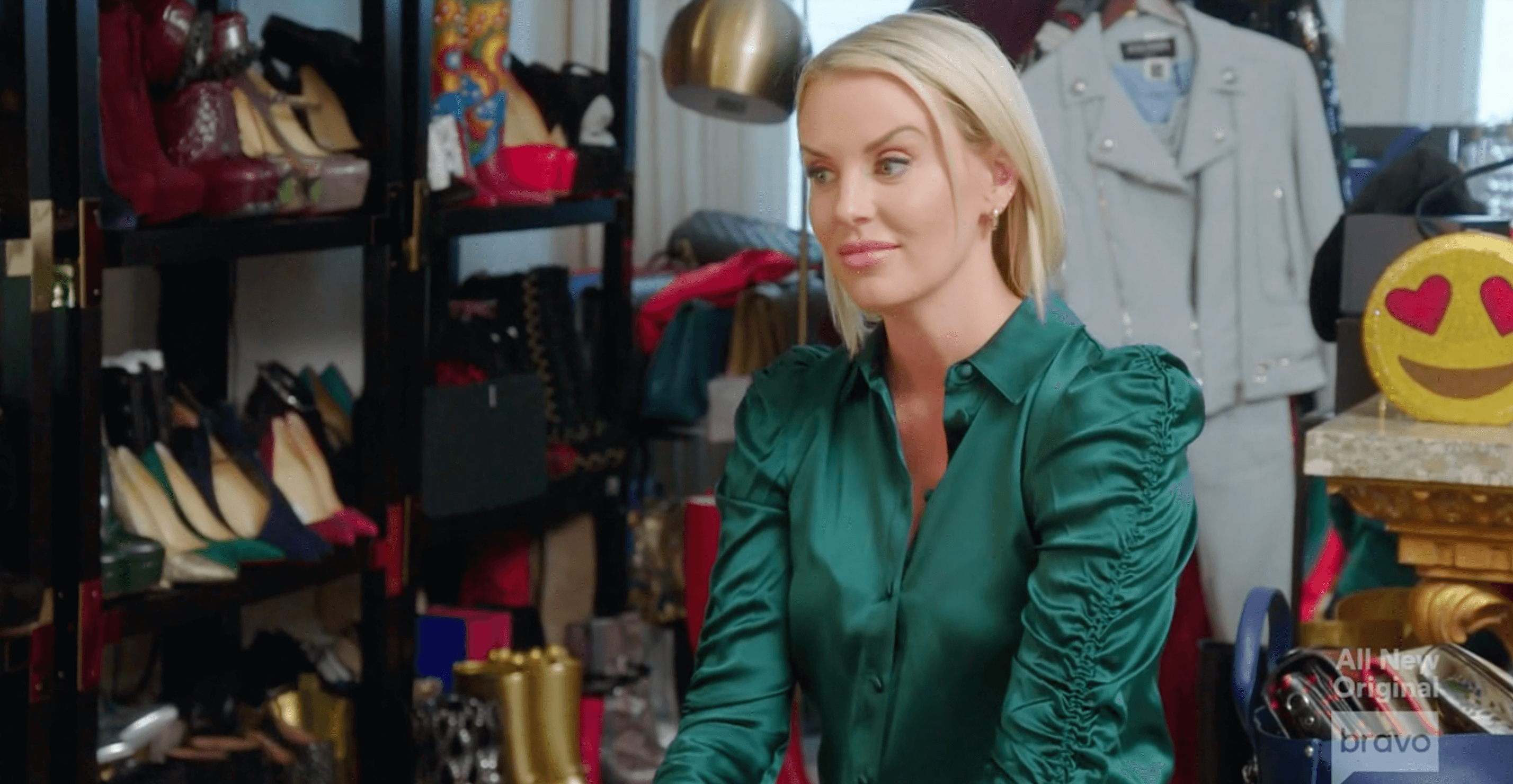 Of course, Mary got her love of clothes from her grandmother. Along with all those houses, and the mortgage company, the church, and even her grandmother’s husband. Thanks, Mawmaw!

Mary wonders why none of the women will stand up for her against Jen. Mary says Meredith and Lisa call her and say they’re secretly scared of Jen. Whitney now feels guilty that she hasn’t had Mary’s back.

At Meredith’s house, Seth is in town. The couple have been flirting with each other, and Brooks is embarrassed. As they giggle, Brooks rolls his eyes and orders sushi for dinner. He finds all their canoodling disgusting.

Meredith and Seth have separated before, but they always stayed together for the sake of the kids. This time, they want to stay together for each other.

Whitney stops by her friend, Sara’s, house. Sara lives within view of the Temple. Both women had their first marriage in the temple. Sara is now on her third husband. Whitney tells us her husband’s family have been resistant about embracing her. They kept his wedding photo of his ex on their wall. After about six years, they added Whitney and Justin’s photo, but kept the pic of his first marriage. When Justin’s ex-wife got remarried, they put up a wedding photo of her with her new husband. 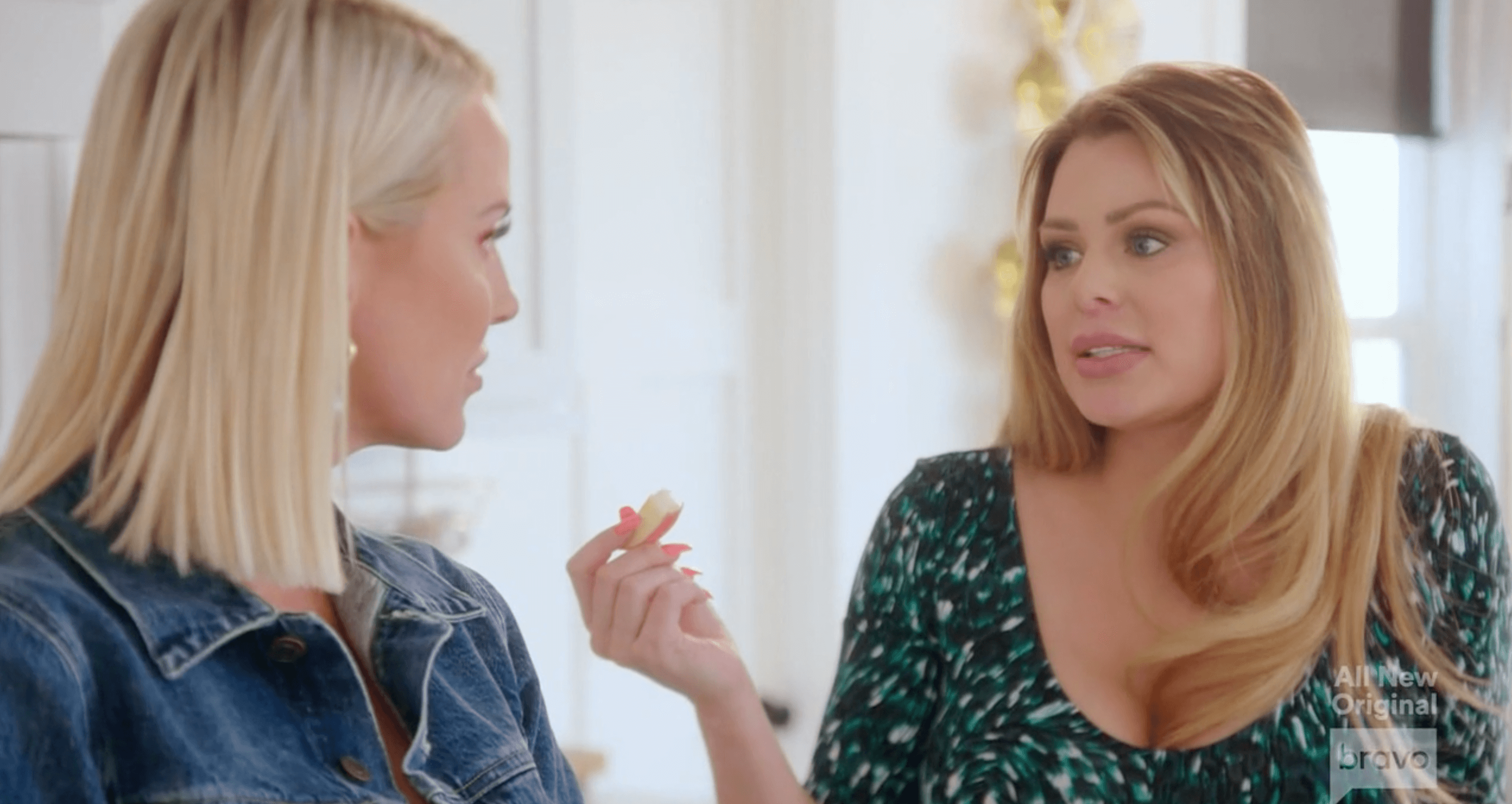 Since Sara knows Jen, Whitney wonders if she should confront Jen about the Mary situation. Sara says, sure. Why the hell not? But Whitney hates confrontation. Still, she wants to do the right thing. Questioning Jen at her husband’s birthday party would be a great time to tackle the topic head on. Right?

Lisa takes her family to the aquarium. Her two boys seem to enjoy themselves, especially when they get to handfeed the penguins. Afterward, Meredith tells us that her boys want to start their own male hair care line called Fresh Wolf. Because in Meredith’s house, you don’t just talk about ideas, you execute them, bitches!

The day of the party has arrived. Jen has recreated Beyonce’s Superbowl outfit for the event. She doesn’t tell Sharrieff where they’re going. She mentions Popeye’s and he’s excited about the prospect of a shrimp po boy. So, when she directs him toward the Top Golf, he’s confused. But he figures, golf is cool, too. It’s not shrimp, but whatevs.

When Sharrieff walks in to the surprise party, it’s sweet to see how shocked he is. He greets former students and the former coach’s wife. He seems happy to be surrounded by family and friends.

Sharrieff and Jen split up and form teams to have a dance off. Whitney has had a little too much to drink. She’s twerking, standing on her hands, and accidentally kicks people in the face. But that won’t win the battle. Jen does that when she gets on the floor and does the worm. 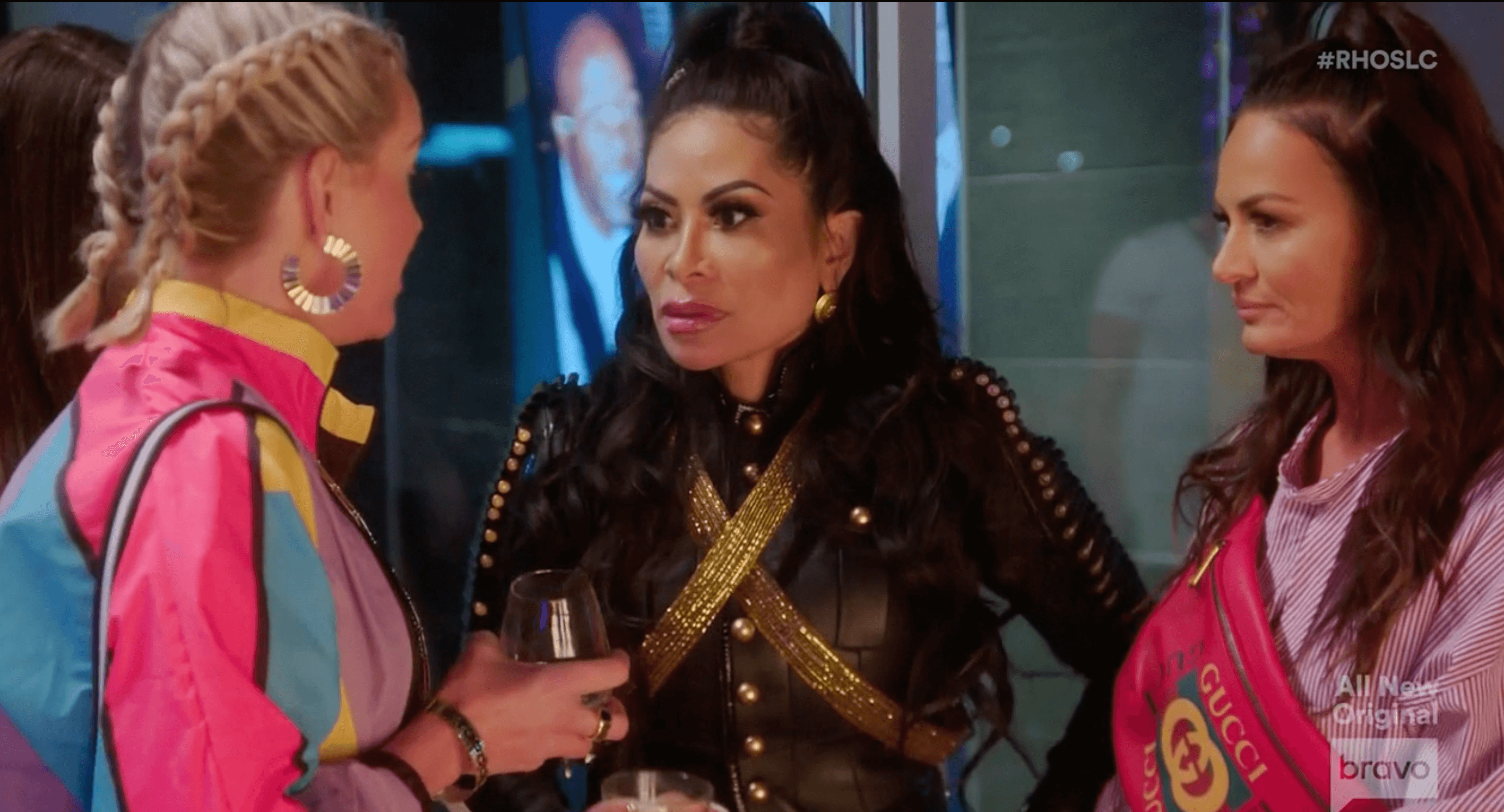 Whitney has had enough liquid courage to talk to Jen. But she’s also so drunk, she’s not making a lot of sense. She and Heather pull Jen aside. After many false starts, Whitney flounders, so Heather tells Jen that Meredith and Lisa have talked to Mary. They’re scared of Jen and secretly back Mary.

When Lisa and Meredith see something go down, they wander over to hear the scoop. Whitney accuses them of being scared of Jen. Both Lisa and Meredith deny it. As Jen storms off, Whitney says Jen has been talking mad shit about Meredith’s marriage. She’s tired of the gossip. Meredith, in typical fashion, refuses to engage.

By now, Jen is so angry, she hurls a glass across the room. Heather is slowly backing away from the shit show.

Jen goes back inside and tugs on her husband. She’s ready to go home, and she angrily pops a few balloons on her way out. Youngest son, Omar, wonders why his mom is so upset. Sharrieff blames the night going left on Jen’s drinking.

And that’s our episode. So, do you think Lisa and Meredith were lying? Are they really afraid of Jen? Should Jen have left her own party?